New Jersey is the most densely populated state in the United States. New Jersey is called the Garden State even with all of its population there is a wide variety of state parks and historic sites available to visit. 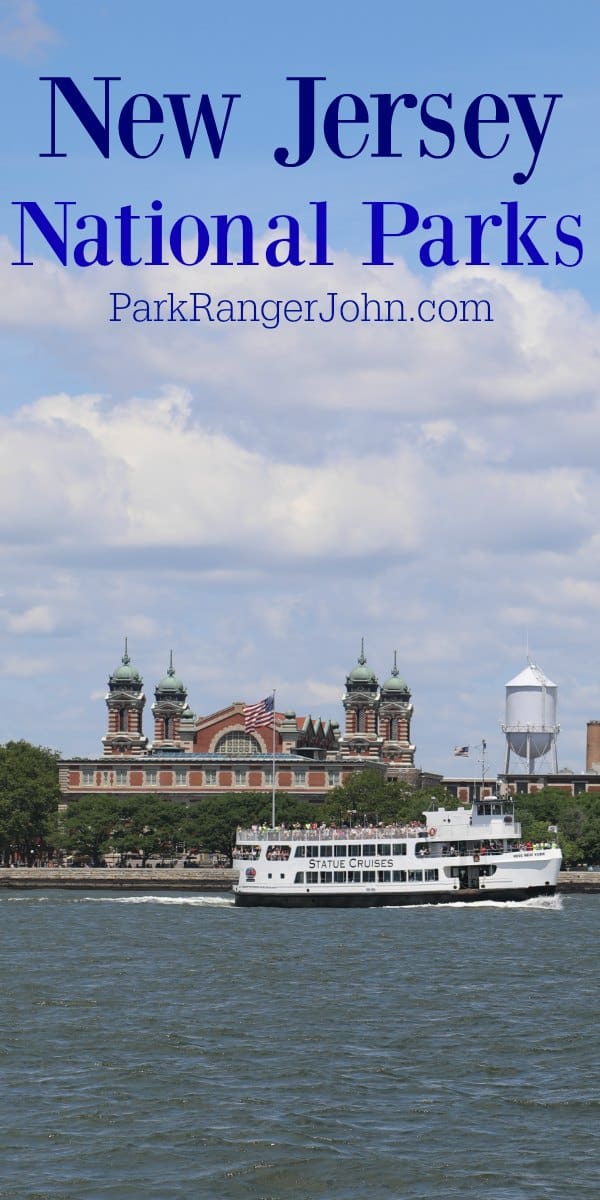 72 miles of the Appalachian Trail traverses New Jersey. The trail ranges from 350 feet in elevation to 1685 feet. Campfires are prohibited and camping is only available in designated spots.

You may want to pick up the Appalachian Trail Guide for New Jersey to learn more about the trails and what to expect. There is also a Nat Geo topographic map of the trail through New Jersey.

Delaware Water Gap NRA is over 69,000 acres of protected land in both Pennsylvania and New Jersey. You can enjoy canoeing, kayaking, swimming, boating, hiking and more.

The Delaware River flows along the Pennsylvania - New Jersey border along the Appalachian Mountains. The National Recreation Area protects 40 miles of one of the last free-flowing rivers in the eastern United States.

This stretch of river is also designated the Middle Delaware National Scenic River. The river is the main attraction offering a ton of outdoor recreation opportunities. You can rent canoes, kayaks, rafts, and tubes from authorized outfitters along the river.

There are also over 100 miles of hiking trails including 27 miles of the Appalachian Trail. There is one developed campground in the park and boaters are allowed limited primitive camping along the river.

The National Park Service now maintains the island and offers interpretive programs. More than 40% of the American population can trace ancestry through Ellis Island. You do not want to miss exploring the Ellis Island Immigration Museum. Plan to spend a few hours minimum exploring the museum.

We are always amazed at how quickly our time passes while exploring the island. You can easily spend all day researching your family genealogy and exploring.

Gateway NRA is located in Eastern New Jersey and Southwestern New York. Protecting more than 26,000 acres of federal lands that offer the opportunity to swim, hike, bird watch, and more.

You can even see the skyscrapers of Manhattan looming in the distance from the park. There are 11 separate sites within the park with the three main units clustered around the entrance to New York Harbor.

The Sandy Hook Unit encompasses 2,044 acres on a barrier beach peninsula on the northern tip of the Jersey shore. This popular area is great for swimming, sunbathing and getting outside.

Great Egg Harbor Scenic and Recreational River is located in Southern New Jersey approximately 25 miles northwest of Atlantic City. The river begins near the town of Berlin and flows for 59 miles to reach the Atlantic Ocean.

You can enjoy canoeing and kayaking on the river. Boat rentals are also available from outfitters in Mays Landing.

The Delaware River is the largest free-flowing river in the Eastern United States. The park was established in 2000. You can enjoy boating, scenic drives and more!

Points of interest along the scenic drive include

Morristown NHP is located 20 miles west of Newark.  The park protects 1,700 acres linked to George Washington and the Continental Army and provides the opportunity to check out the park museum and tour Revolutionary War sites.

General George Washington chose Morristown, New Jersey as his headquarters and encampment site for the Continental Army twice during the Revolutionary War. The town was a great strategic location with access to resources and was not vulnerable to a surprise attack.

The park preserves sites associated with the two winter encampments and interprets the historical significance of the area. Morristown was the 1st National Historical Park in the National Park Service.

Washingtons Headquarters includes the Ford Mansion that served as George Washington's command center. You can still see furnishings that were present when Washington stayed there.

Fort Nonsense protects the site of a fortification constructed on Washington's orders in May 1777. The site had a view of the roads leading into Morristown and was planned as a location to retreat in case of a British attack.

Jockey Hollow is southwest of town and is the area where soldiers camped during the winter of 1779-1780. The park visitor center is located here and includes a park film and full-size models of the huts soldiers would have camped in.

Pinelands National Reserve is located in Southern New Jersey and protects over 1.1 million acres. This was the first national reserve in the United States.

Paterson Great Falls NHP is located in Northern New Jersey approximately 14 miles northwest of New York City. The 40 acres of the park are open year-round and offer walking tours and epic waterfalls on the Passaic River.

Paterson Great Falls commemorates one of the country's earliest manufacturing cities. Alexander Hamilton believed the 77-foot high Great Falls on the Passaic River were a force that could be harnessed to power nearby factories.

You can check out amazing views of Great Falls along with seeing the raceways that channeled river water to power machinery. You can also enjoy a ranger-guided tour of interpreting the city's history.

Thomas Edison created or significantly improved the lightbulb, electric power systems, the phonograph, the stock ticker, the telegraph, storage batteries, and motion pictures. Mr. Edison had over 1,093 U.S. Patents issued to him.

There are 1,621 places recorded by the Heritage Documentation Program, over 6.8 million objects in the New Jersey National Park Museum Collection and 575 Archeological Sites.