The General Grant Tree is one of the highlights of visiting Kings Canyon National Park in California.

Called the Nations Christmas Tree you will not believe how big and beautiful this giant Sequoia tree is. 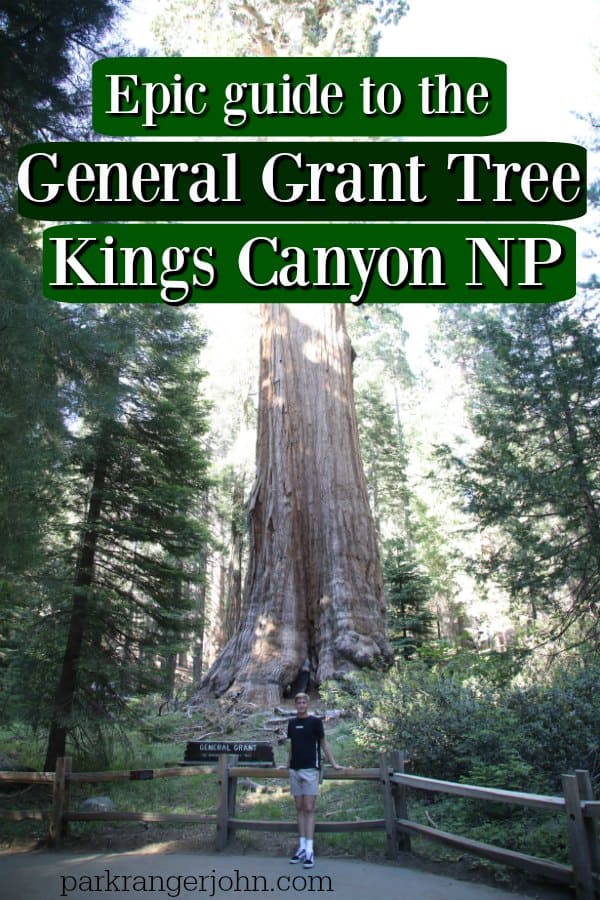 Directions to the Grant Grove of Giant Trees - The road to the parking lot is 1 mile (1.6 km) north of Grant Grove Village.

One thing to know when we talk about being the 3rd largest tree is the measurement is done by gross tons.

You may look at the Sequoia trees and think...well that isn't as tall as a Redwood and you would be correct.

The Sequoia trees are broader, thicker, and more dense trees.

The General Grant Tree was named in honor of Ulysses S. Grant in 1867. President Calvin Coolidge coined the term the Nation's Christmas tree.

The parking lot of the Grant Grove is one of our favorite places in all of Kings Canyon National Park. It is amazing as you pull in and realize just how many giant Sequoia Trees are packed in this area. 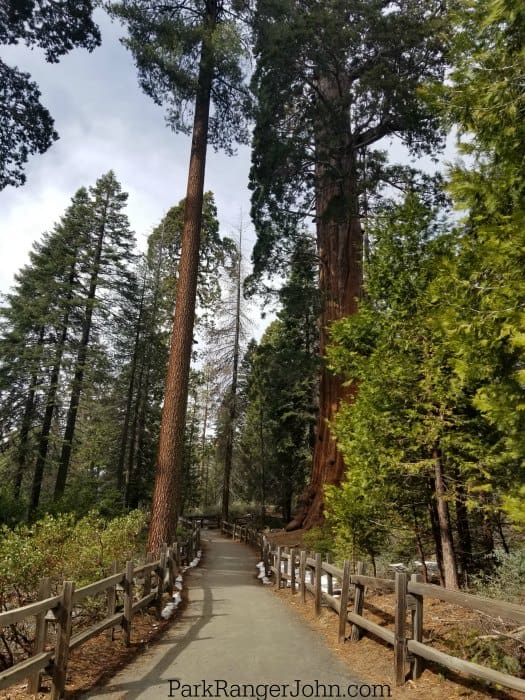 There is a 1/3 mile paved loop trail that guides you to the General Grant Tree along with passing by other giant Sequoia Trees.

The trail is sloped but is not very steep. If you are visiting in the winter you will want to be prepared for snow or ice on the trail.

Bicycles and Pets are not allowed on the trail.

You can pick up a pamphlet at the trailhead or at the Grant Grove Visitor Center bookstore with additional information about the trail. 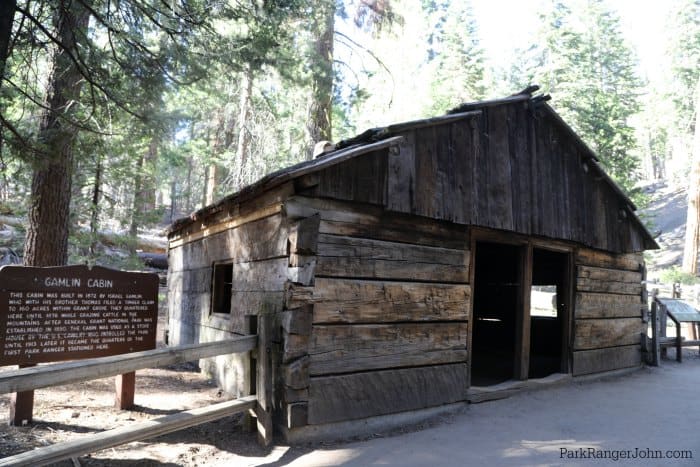 The Gamlin Brothers built the walls of this cabin originally with hand-hewn wood from Sugar Pine Trees in 1872.

The cabin has been moved and reconstructed three times since it was originally built. Due to decay, the lower logs on the walls of the cabin were replaced with Sequoia logs in 1978.

This cabin was used by the United States Cavalry to store hay and grain. They were the first protectors of the then General Grant National Park in 1891. 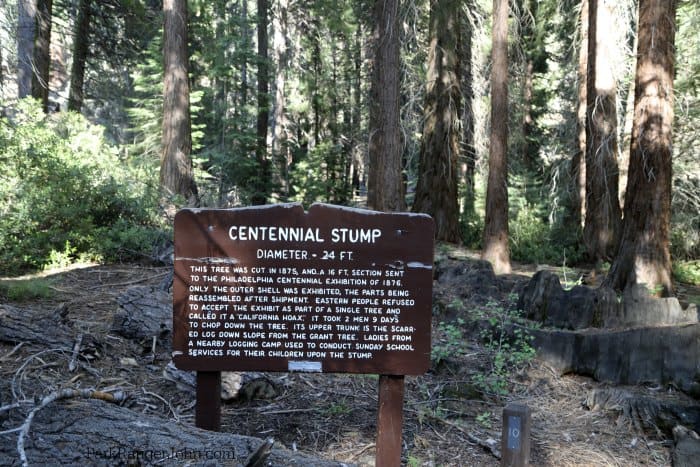 The Centennial Stump and the fallen log beyond are all that is left of an amazing Sequoia Tree.

William and Thomas Vivian believed they could make money by displaying a section of this Sequoia Tree at America's Centennial Exhibition in Philadelphia in 1875.

They hired John Trout and John Carrington to fell the tree. It took 9 days of sawing to fell the tree. Once the tree was down they cut a sixteen-foot section that was split into sections and hauled out of the grove by a bull team.

When the tree was put on display the Vivian brothers were laughed at. You could see the segments where the tree had been cut and put back together. People viewing the tree laughed and called it the "California Hoax".

The California Tree was struck by lightning in August 1967.  25 feet on the top of the tree was lost in the blaze.

It is amazing to think that park forester, Charlie Castro, climbed the tree to the right of the California Tree and traversed a rope stretched between the two trees.

He managed to climb to a place where he extinguished the fire caused by lightning with a fire hose. 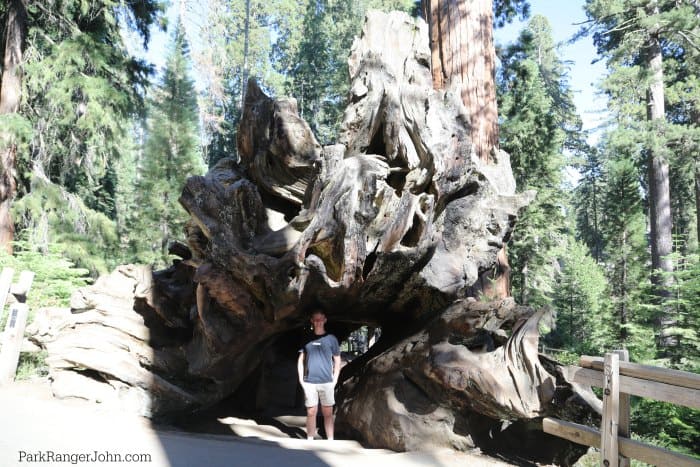 The Fallen Monarch is a hollow log that is 124 feet long.

There are photos from the late 1800s that show that the Fallen Monarch has not changed much in over 100 years.

You can see the remnants of the rootball at the base of the Fallen Monarch.

The Gamlin Brothers actually stayed inside the Fallen Monarch while they built their cabin.

The tree was also used by Trout and Carrington as a place to live while they worked on cutting the tree that became the Centennial Stump.

It is large enough that the U.S. Cavalry housed 32 horses in the fallen log.

If you want to stretch your legs a bit more you can take the 1.5 mile North Grove Loop. The trail leaves from the parking lot.

This is a great trail to get deep in the big trees. 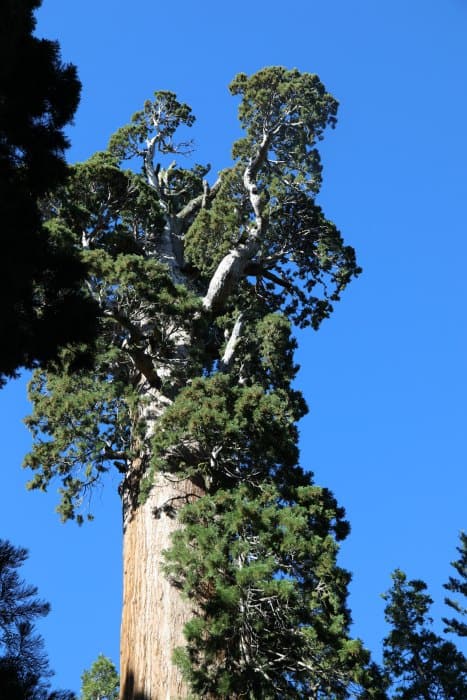 The General Grant Tree was discovered by Joseph Hardin Thomas in 1862. The tree was named by Lucretia Baker in 1867. (I have read that there are some disputes over who named the tree).

President Eisenhower designated the Grant Tree a living National Shrine in memory of Americans who have died in war in 1956. 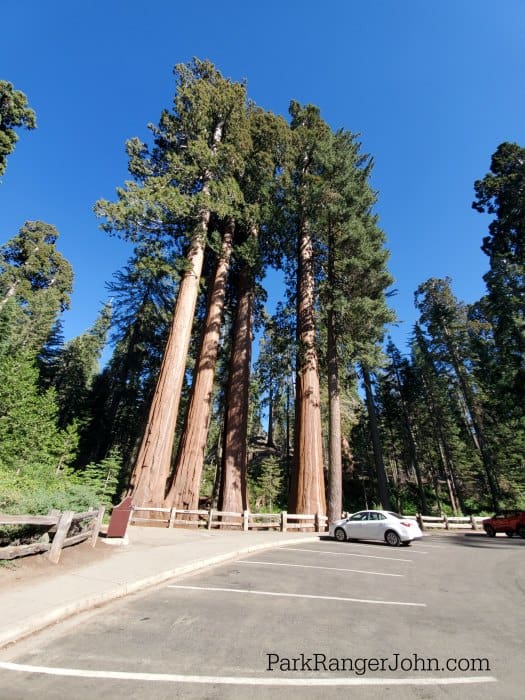 The tree is as tall as a 27 story building.

It is wider at the base than a 3-lane freeway.

It weighs more than 700 large cars.

If the wood was strong enough for construction it could build 40 average-sized 5 room houses. 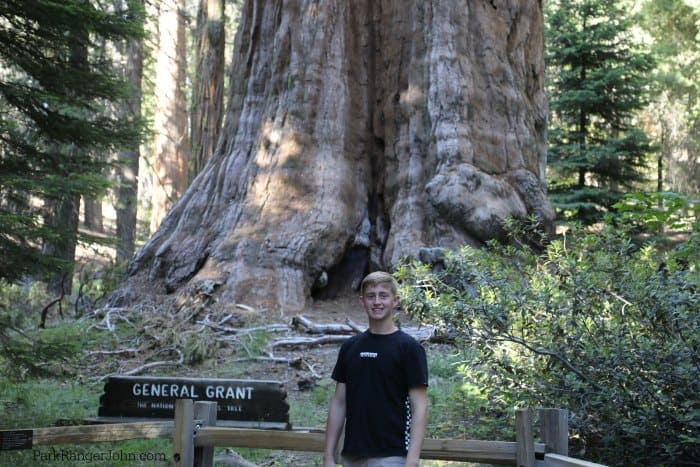 The closest campgrounds to Grant Grove are the Azalea Campground, Crystal Springs Campground, and Sunset Campground.

Check out all of the Kings Canyon Campgrounds.

The closest lodging is the John Muir Lodge next to Grant Grove Village.

The General Sherman Tree can be found in Sequoia National Park.

Things to do in Kings Canyon - Check out all of the great things to do while in the park.

Sequoia National Park Camping - Check out the great campgrounds in this neighboring park.