One thing we have learned from multiple visits to Sequoia NP is every time you come to the park you will fall in love with a new area or see something in a new way.

One of the best parts of Sequoia National Park is how easy it is to drive through the park. Most of your time will be spent on the General's Highway that runs between Sequoia and Kings Canyon National Park.

If you visit in the winter or shoulder seasons some of these things to do may be closed due to weather. 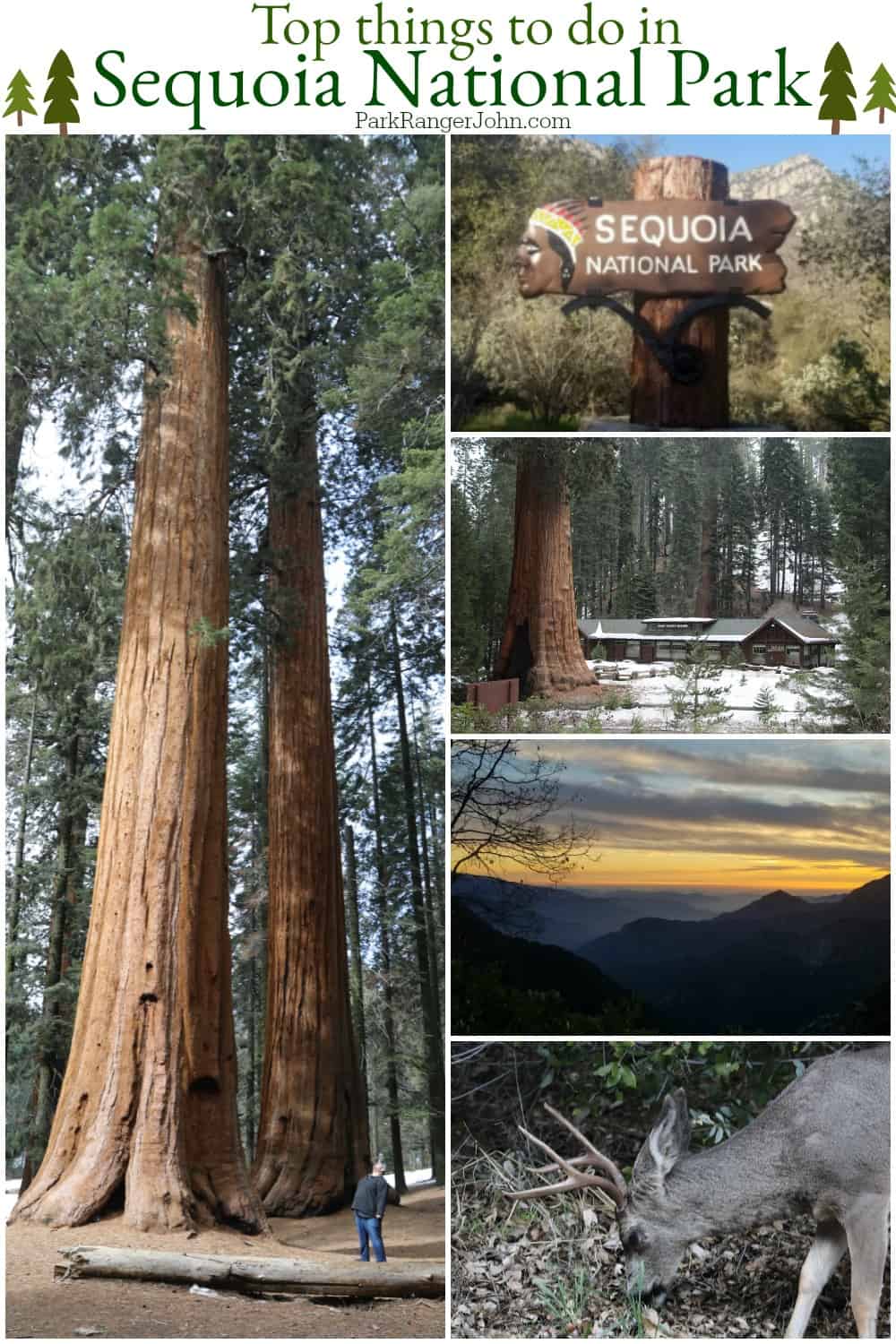 Things to do in Sequoia National Park 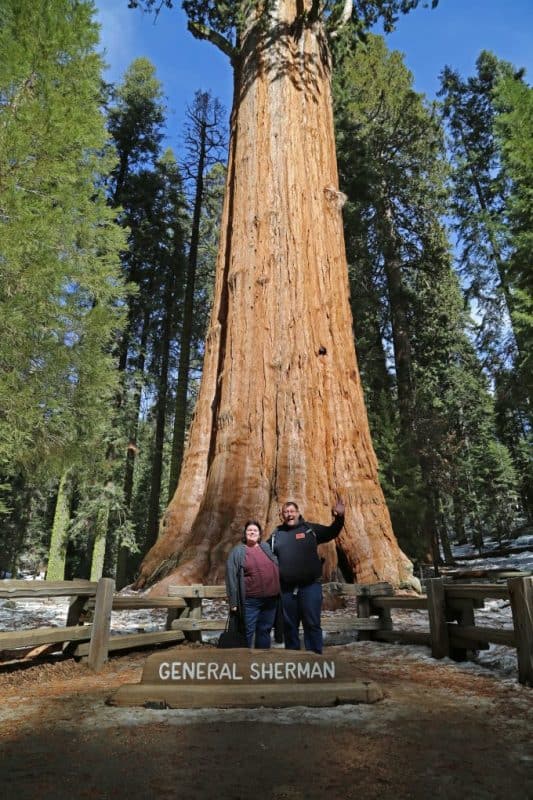 There is a great trail that leads to the General Sherman Tree and also wanders among other giant Sequoias. 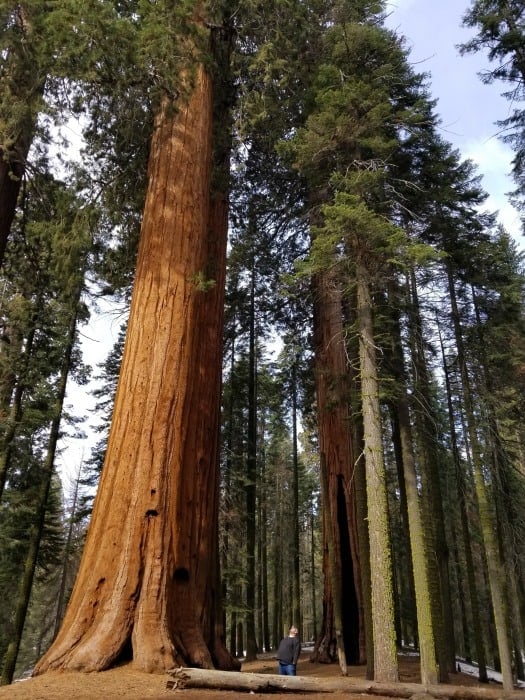 Walk among the big trees in the Giant Forest

The Giant Forest was named in 1875 by explorer and conservationist John Muir. You can see the trees today just like Muir saw them over 140 years ago.

To give a bit of perspective I am 6 ft 3 inches! As you can see in the photo above I look small compared to a giant Sequoia and that does not happen very often.

Enjoy a trip to the Giant Forest and a view of the world's largest living thing, the General Sherman tree. The 275-foot-tall General Sherman Giant Sequoia weighs an estimated 1,385 tons and has a circumference (an outside measurement) of 103 feet at the base.

I've told more than a few people of the size of Giant trees, but I don't think they all believed me. However, seeing is believing, and for anyone who has never seen these amazing giants they alone are worth the trip.

It's hard to imagine that the more than one-half-million board feet of lumber from just the trunk of General Sherman would build more than 40 five-room houses. The Sequoias reach an average height of between 250 and 300 feet. The average diameter (measured from side to side) of the giant trees ranges from 10 to 35 feet. 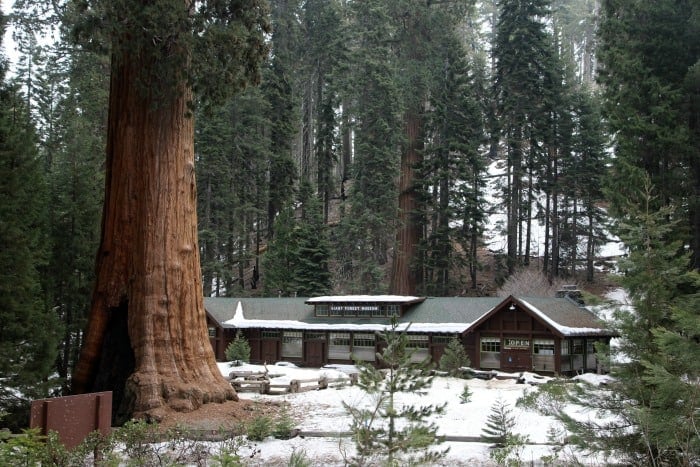 The Giant Forest Museum is open daily and is free of charge. The museum is full on interactive hands-on displays and interpretive information that celebrates the life of a giant Sequoia tree.

The Giant Forest Museum is located on Highway 198 about an hour north of the Ash Mountain Entrance. Check the park brochure for current museum hours. 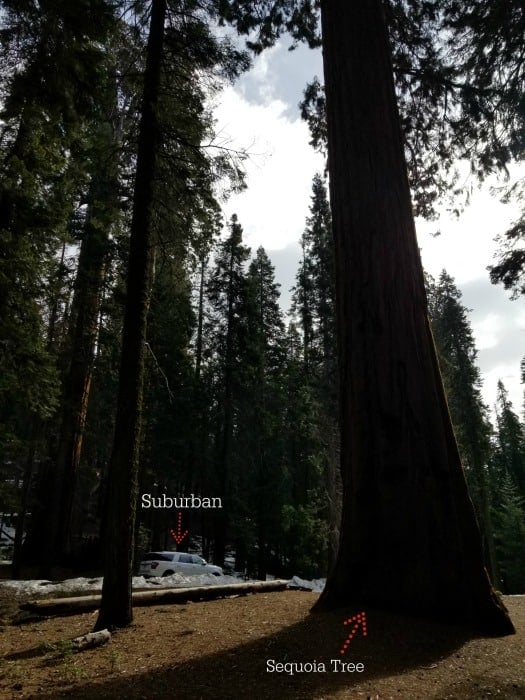 Drive the Generals Highway and realize just how small we are compared to these giant Sequoia Trees. It is hard to believe how big they truly are until you see a full-size SUV drive by one and realize it looks like a toy car.

Located 1.5 miles east of Moro Rock parking area you will not believe how pretty Crescent Meadow is. It is said that John Muir called this lovely grassy open area the "Gem of the Sierras".  The hike around the meadow takes about an hour.

The Sequoia Natural History Association offers 45-minute guided tours of Crystal Cave from mid-June to early September.  Tickets must be purchased at the Lodgepole or Foothills Visitor Centers. A jacket or sweater is recommended for going into the cave since it is about 50 degrees Fahrenheit in the cave.

Crystal Cave is located at the end of a twisting seven-mile road heading west from the General's Highway, two miles south of the Moro Rock turnoff. Trailers, RV's, and buses are prohibited because of the road's narrowness. From the parking area, it is a 15-minute hike DOWN a steep path to the cave entrance. 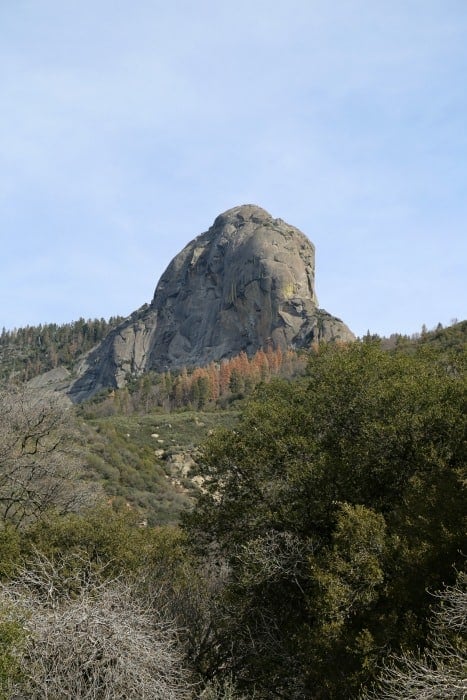 Moro Rock offers unbelievable views of the Great Western Divide and its rugged canyons for those willing to hike up to the top.  To get to the top of Moro Rock you will need to take a quarter-mile trail climbing nearly 400 steep rock steps to the top of the barren 6,725 feet viewing area. By viewing platform, I truly mean a couple of guardrails on the top of the rock. The Moro Rock parking area is three miles south of the General Sherman Tree off of the General's Highway.

Moro Rock is a must-see for everyone. It is located 1.5 miles from the Giant Forest Village. There are steps, with a railing, that twist and turn as you make your way up to a one-fourth-mile climb of 300 vertical feet. As you climb your view is blocked to the west by the giant rock, but you can see portions of the Sierra Nevadas to the east.

Once you reach the top you are rewarded with a spectacular view of the Sierra Nevadas to the east and the foothills and plains stretching out as far as the eye can see to the west. At the summit of Moro Rock, you are at an elevation of 6,725 feet. The rock face drops off dramatically to the west, so if you are afraid of heights don't look down.

Tunnel Log is the only tree you can drive your car through in Sequoia or Kings Canyon NP. The fallen tree is located 2.7 miles from the General's Highway via the Crescent Meadow Road. Tunnel Log was created after an un-named Giant Sequoia fell from natural causes in 1937.  The tunnel is 17 feet wide and 8 feet high (5.2 meters by 2.4 meters). 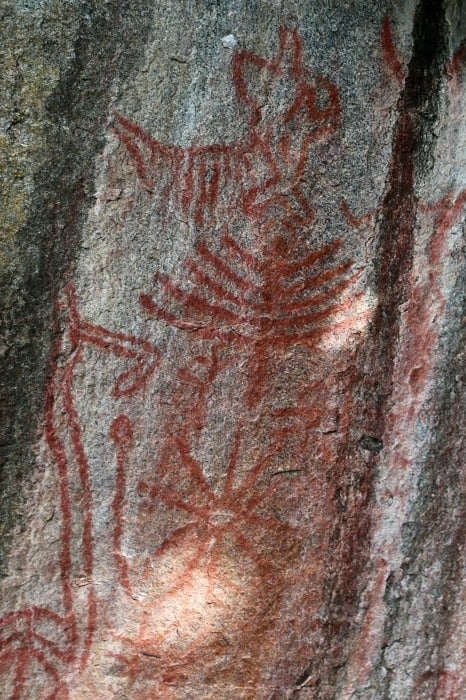 Hospital Rock was home to a subgroup of the Monache people until the 1870s. There is a nice parking lot across the street with a small picnic area. Once you cross the street you can see pictographs as well as more than 15 grinding holes that were used by Monache women to grind acorns into flour. 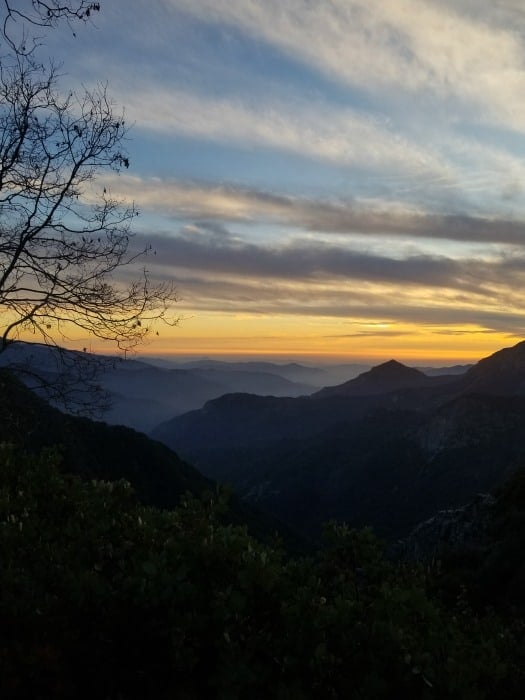 There are quite a few overlooks and scenic pull-offs as you drive the General's Highway. Take advantage of these gorgeous vistas as you gaze out over the mountains. Look for Moro Rock and other park highlights from the road.

If you are in the park near sunset definitely pull over safely and check out the changing colors. 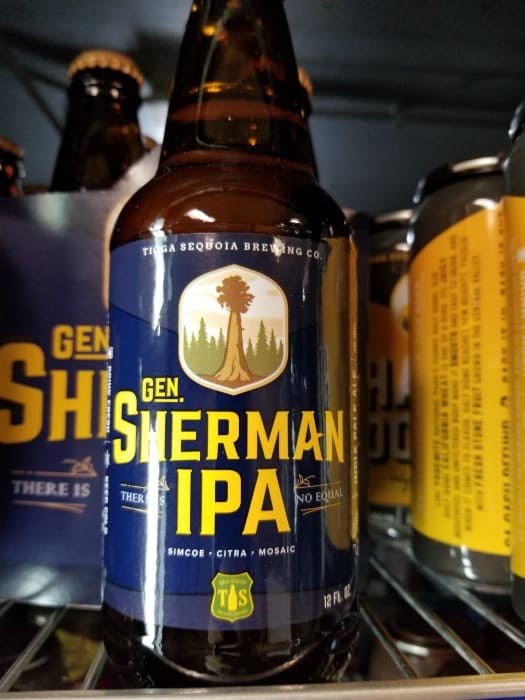 Have a General Sherman IPA

What better way to cheers to the end of an amazing day in Sequoia than toasting with a General Sherman IPA!

This is one of our favorite National Park inspired beers. 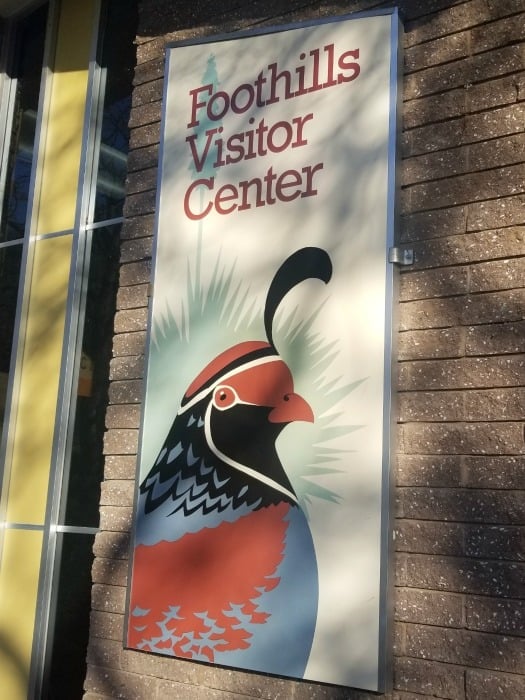 A stop at a Sequoia Visitor Center is a great way to learn more about the park, pick up a Junior Ranger program, ask about daily tours and ranger programs, and find out current conditions in the park. 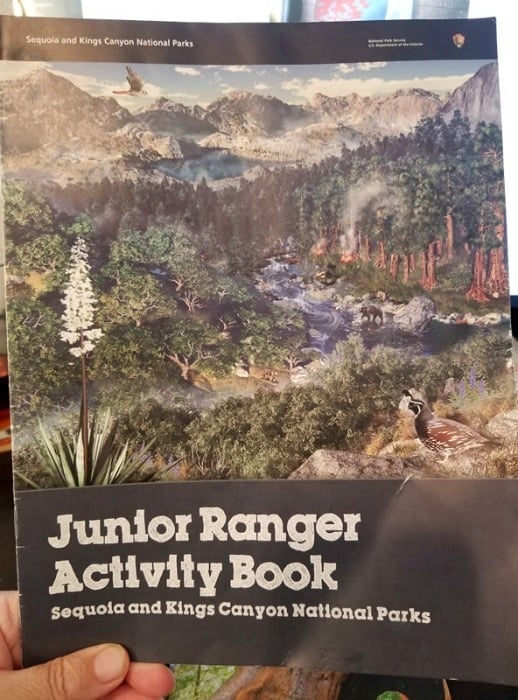 Junior Ranger packets can be picked up at any of the Sequoia National Park visitor centers. There are 10 activities in the book and your age decides how many you will need to complete. The Junior Ranger program is a fantastic way to learn more about the park and earn a great park badge.

Leave the driving to a professional and enjoy a sightseeing tour of Sequoia National Park. Experienced guides will take you on a journey through Sequoia's scenic wonders and provide a rich history of the area.

Tharp' Log is the oldest pioneer cabin remaining in Sequoia National Park. John Muir called it "a noble den". The cabin is located in the Giant Forest Area about a mile northeast of the Crescent Meadow parking lot. The cabin was built by Hale Thorp, the first non-American Indian settler in the area. He established a cattle ranch among the big trees and built a simple log cabin from a fallen, fire-hollowed Sequoia tree in the 1860s. 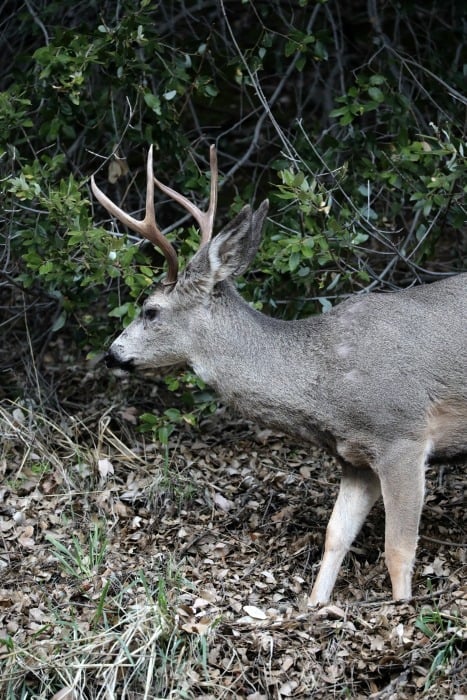 Keep an eye out for wildlife during your visit. During our last trip, we saw tons of Mule Deer and some great birdwatching. We also saw ground squirrels in the Potwisha Campground. In the summer and late spring keep an eye out for black bears in the park.

Visit this page to find out when the 2019 dates will be announced.

Things to know when planning a trip to Sequoia

The parks are located 25 miles north-east of Three Rivers California. If you're coming from the San Francisco area take Highway 99 south to Fresno, then Highway 180 east to the parks. From Los Angeles, you take Interstate 5 to Highway 99 north to Visalia where you exit on Highway 198 heading east.

Sequoia National Park was created on September 25, 1890. Just one week later Congress tripled the size of the park. In 1940, Grants Grove, where the Giant Sequoia named the General Grant stands, was added to the newly created Kings Canyon National Park. Then, in 1943, the two parks came under joint management. The total area of the two parks is 864,383 acres.

Don't miss this opportunity to experience a place you will remember all your life. As John Muir once said, "Climb the mountains and get their good tidings. Nature's peace will flow into you as sunshine flows into trees. The winds will blow their own freshness into you, and the storms their energy, while cares will drop off like autumn leaves."

Don't miss our top things to do in Kings Canyon National Park!

Check out all of the Sequoia National Park Campgrounds