Isolated by the chill waters of the largest freshwater lake on earth is a richly forested island of volcanic rock that we call Isle Royale National Park. It is a world apart, a uniquely secluded northern wilderness where the ruthless delicacy of nature's balance is an observable fact. This 45-mile-long refuge, some 15 to 18 miles from Canada and about 50 miles from the Michigan mainland, is one of the few places in the lower 48 states where wolves run free and unchallenged, playing, as they once did across much of the Northern Hemisphere, a vital role in maintaining the health and strength of the wildlife community they prey upon.

Some 9,000 springs and autumns have come and gone since glacial ice withdrew from the land around Lake Superior, leaving this scoured island. Always and dependable, spring has been a time of revival, when the many faces of nature have awakened fresh-eyed to new beginnings, and autumn a time of consolidation. Yet each seasonal cycle has been different from all the others, each a subtle variation on the long theme of nature's complex interweaving.

Winter's grip is still firm when the winter wren, that earliest herald of spring, begins pouring out a riotous song from upland thickets of beaked hazel and green adler. By mid-April, skunk cabbages, the first blooms of the new growing season, poke their tapered sheaths up through little melt holes in thinning crusts of swamp ice. Life is astir. Already great horned owls, ravens, and gray jays are feeding downy nestlings. Moose, having survived the winter on twigs and buds, even stripping the bark from trees, are discovering the leaves of wild strawberries, still green beneath the melting snow. The bulls' huge racks are gone now; swelling lumps high on their foreheads show where new ones will soon grow. The common loon and its mysterious song once again invade the quiet and protected waters of this island wilderness. The sleek black-and-white birds busy themselves with courtship and with the seasonal rituals of nest building and rearing their young. 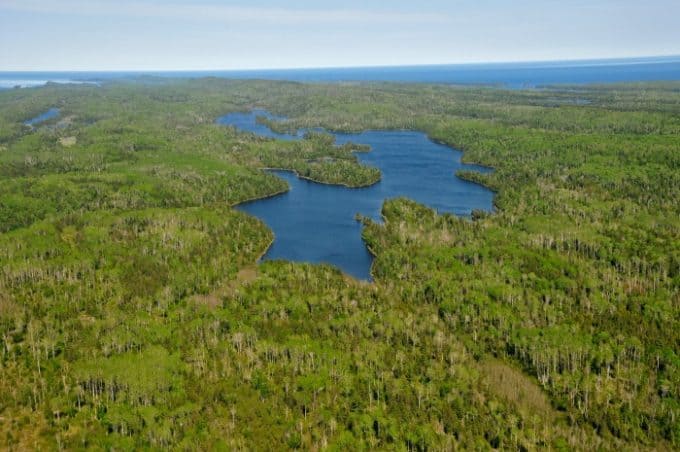 In the seclusion of a den, a wolf mother brings forth her litter, generally two to four pups. Den sites vary; this one is an old beaver lodge concealed by a stand of alders. The meadow where the alders grow was once a beaver pond, but the dam builders died on moved on, and now their lodge stands high and dry, a mound of tangled sticks, earth, rocks, and the roots of brushy overgrowth. On the raised platform of its inner chamber, the she-wolf nurses her brood. The pups pack together, whining and nuzzling in the cool gloom, and their warm body scent blends with the rich earth aura.

Most years, only one litter is born in a wolf pack, and that to the dominant female; the father is almost certainly the dominant male. The hierarchy of a wolf pack is strict, and failure to observe its rules brings sharp retribution, not only from the leaders but from other members of the pack as well. A breeding pack generally has a pair of leaders and perhaps a second in command that scientists call the beta male. The dominant pair, which carries their tails raised like flags of authority, make strategic and tactical decisions; it is they who begin a hunt and, after choosing potential prey, make the first move against it. Other members of the pack, which may vary in number from 2 to 22, have their roles to play. As in any social structure, these vary from pack to pack and even from season to season, according to the skills and personalities of the wolves involved. In addition, most packs include one or two followers, usually males of low rank that tag along behind, scavenging the leftovers of a kill after the others have finished.

Isle Royale's other large inhabitants, the moose, lead solitary lives by comparison. They may feed in groups, even enjoying one another's company, but in matters of life and death, each adult is on its own. The bond between a cow and her calf is strong, however; the two stay together for almost a year, the mother protecting her calf with all her considerable strength. But now it is time for an expectant cow to drive away her yearling calf in preparation for this spring's new responsibility.

Still unwise in the ways of wilderness survival, the yearling is likely to blunder about the forest, easy prey for wolves. It is a time for thinning out the generation when those with undependable instincts are lost before they can reproduce. Many a yearling attaches itself to an older bull, from whose example it gradually gains competence in the many skills of moosehood.