What to expect when staying at the Kettle Falls Hotel in Voyageurs National Park including how to make reservations, getting to the island, room tour, and more! 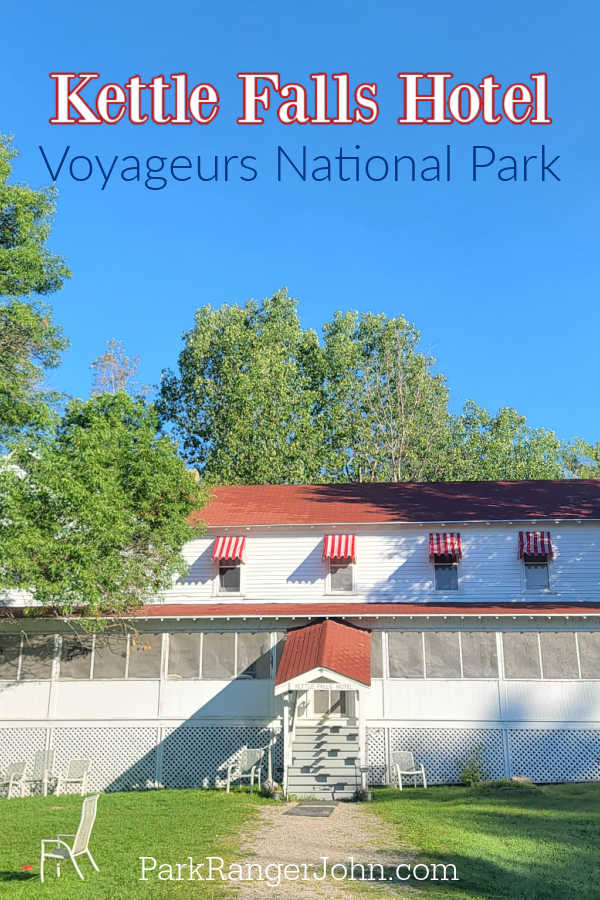 We enjoyed an amazing stay at the Kettle Falls Hotel in Voyageurs National Park. This is the only National Park Lodge within the park.

Reservations are made over the phone. We received a confirmation letter with our deposit receipt in the mail after we made our reservation.

You can also email Kettlefalls@Frontiernet.net 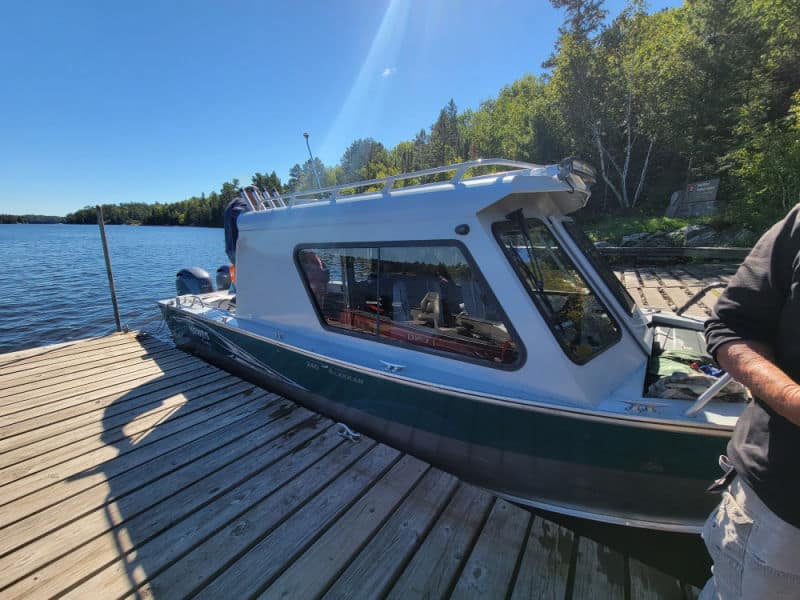 When we made our reservations for the Kettle Falls Hotel they said we would have an 11 am boat pick up from the Ash River Visitor Center. We honestly had no idea where we were supposed to meet someone or what to expect for the boat.

We stopped at the visitor center, and they pointed us to the boat launch and said to park anywhere there wasn’t a sign saying day parking only. After parking, we headed down the hill to the boat ramp to see if we could find the shuttle.

What we found was a small boat that held ten people and our luggage. I am going to tell you now to NOT overpack for a trip to Kettle Falls. All of the luggage was placed in the front area of the boat.

Also, make sure you keep a hand on your luggage especially if it is on wheels until it is in the boat. Our luggage almost rolled off the dock into the water.

If you have any mobility restrictions I would talk with the hotel before scheduling your boat shuttle.

It was a 25-ish minute boat ride to the hotel. I am going to admit we spent the entire ride hoping our suitcase did not fall off the top of the luggage pile into the water. There were a few moments that we held our breath but thankfully the luggage made it safe and dry.

There is seating inside the boat on 2 benches and then seating at the back of the boat. We had 9 people on the boat heading to the hotel plus the driver. 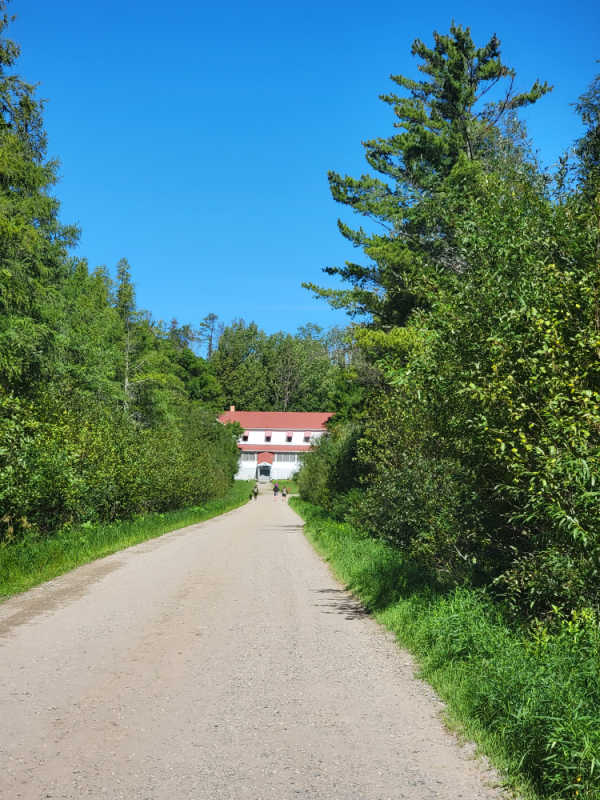 Once we reached the hotel they picked us up with golf carts that had a bucket that was pulled for luggage. It was a quick drive up the road to reach the hotel for check in. 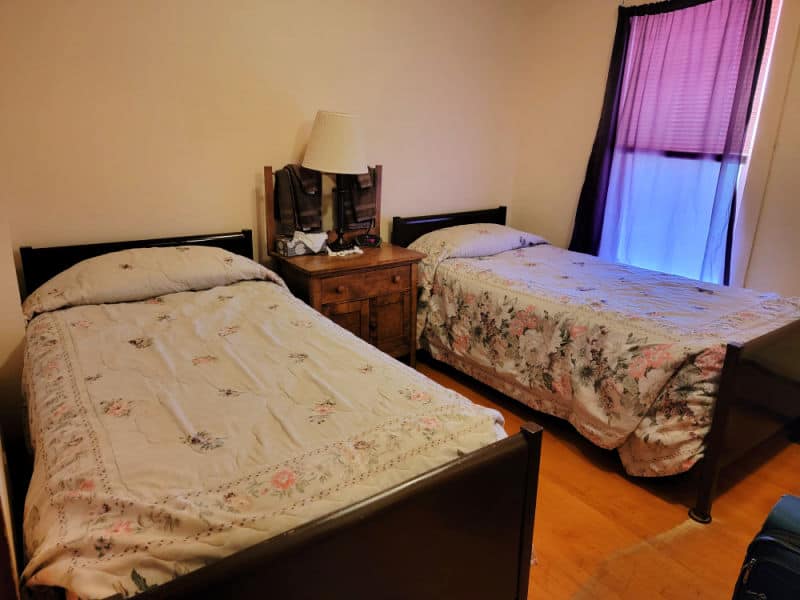 When we checked in they were unable to find the key for our room. The prior guest had taken it with them by mistake. We were able to load our luggage in the room and head back downstairs to relax.

The room offers single and double beds. We had a room with two single/twin beds, a nightstand, dresser with mirror, and a fan. There are shared bathrooms just down the hall from the room.

The room had towels hanging from the nightstand to use in the bathroom. There was also small bottles of shampoo, conditioner, soap, and lotion available. 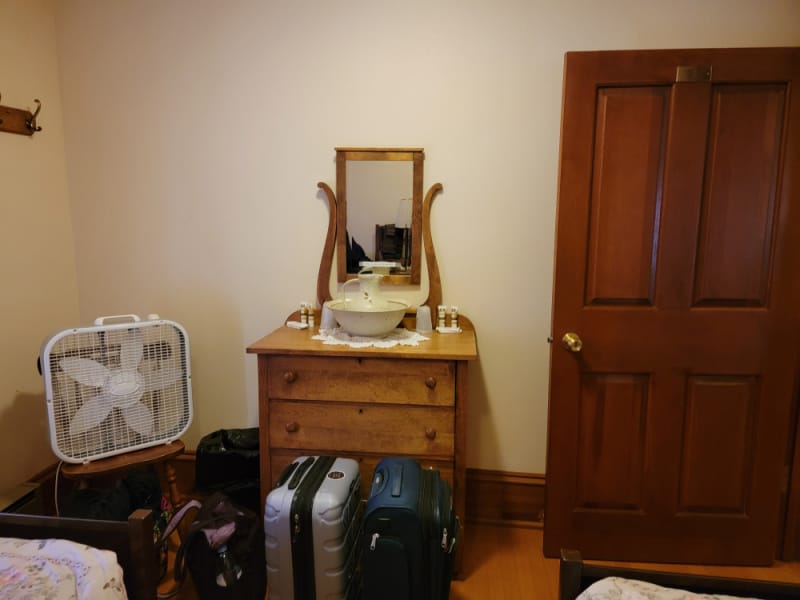 The rooms are located on the 2nd floor of the hotel up a semi steep staircase. 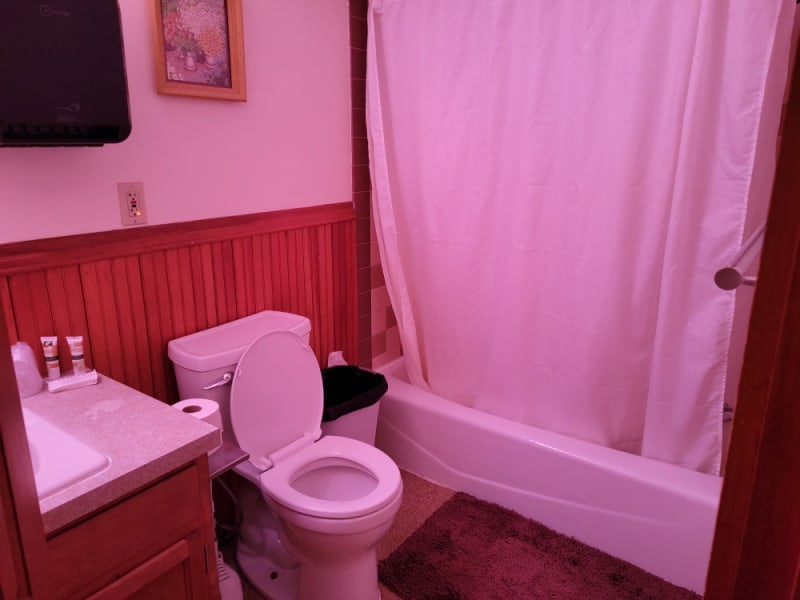 There are a couple of shared bathrooms with sinks, toilet, and bathtub/showers on the same floor.

There are 12 historic rooms at the Kettle Falls Hotel all furnished with antique furnishings.

The hotel does not have any televisions, minifridges, or air conditioning. We did have Wi-Fi while staying at the hotel.

The restaurant is open for lunch and dinner. The menu has a bit of everything including cheese curds, burgers, and dinner options. 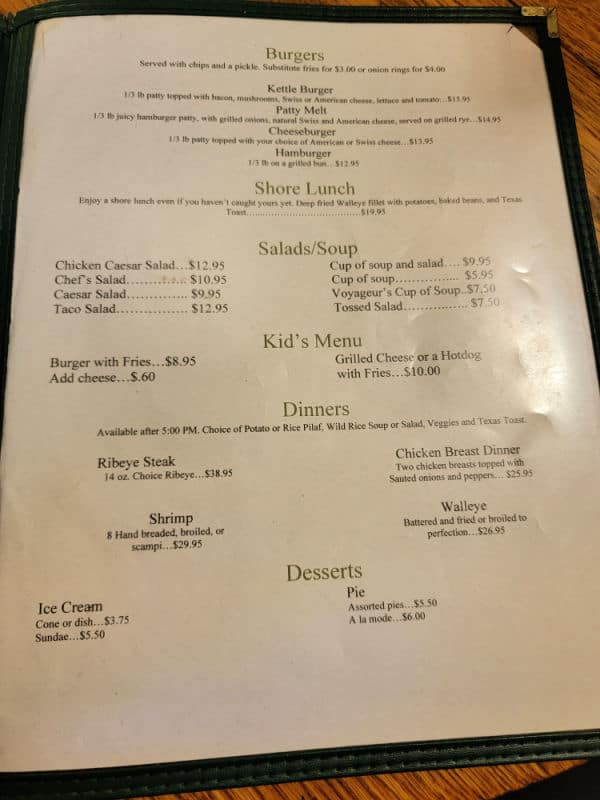 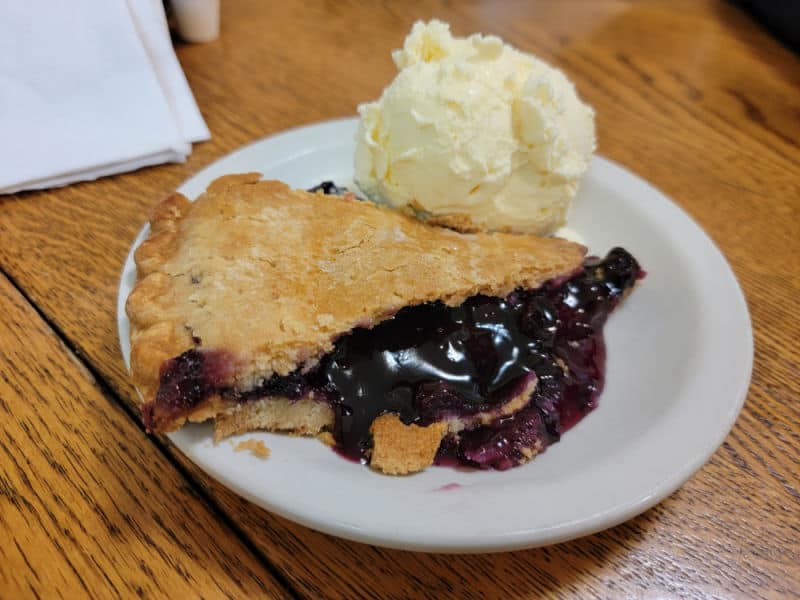 We definitely suggest trying the blueberry pie and ice cream. 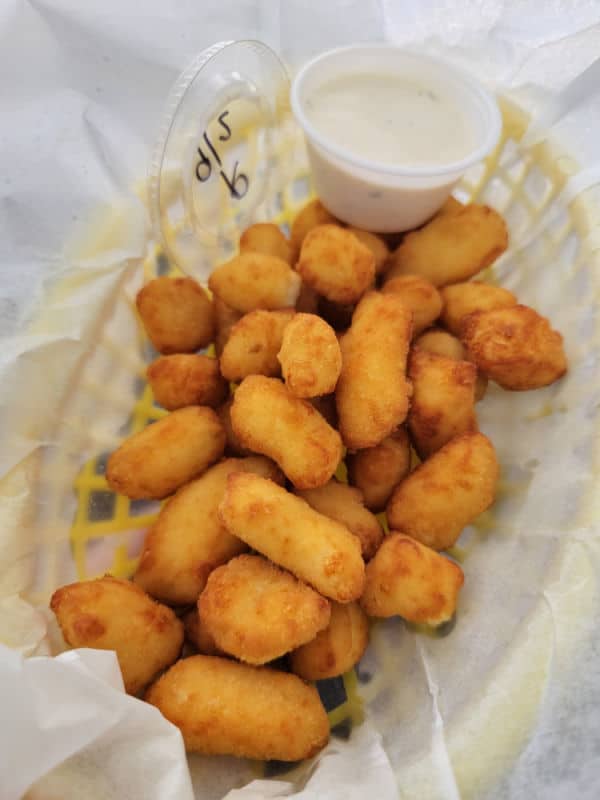 Make sure to order the cheese curds! They are amazing and so good. 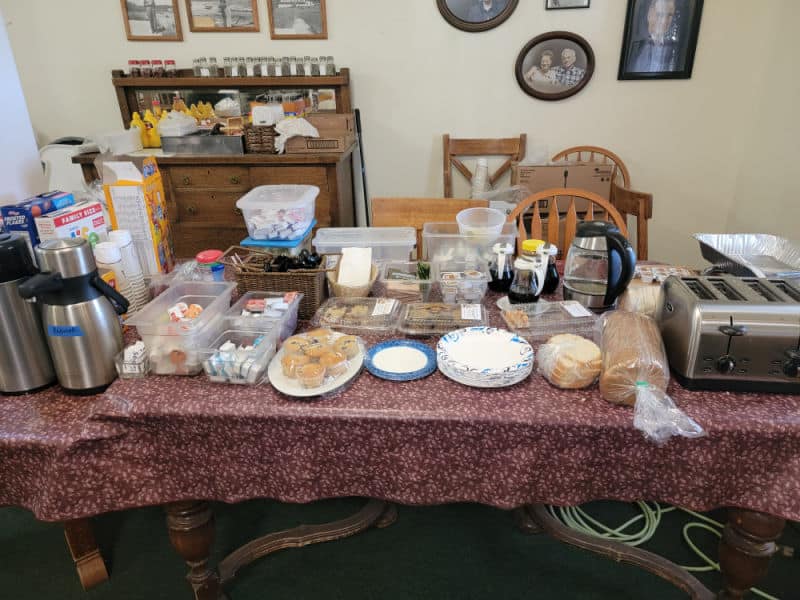 Guests staying at the hotel can enjoy a continental breakfast in the morning. 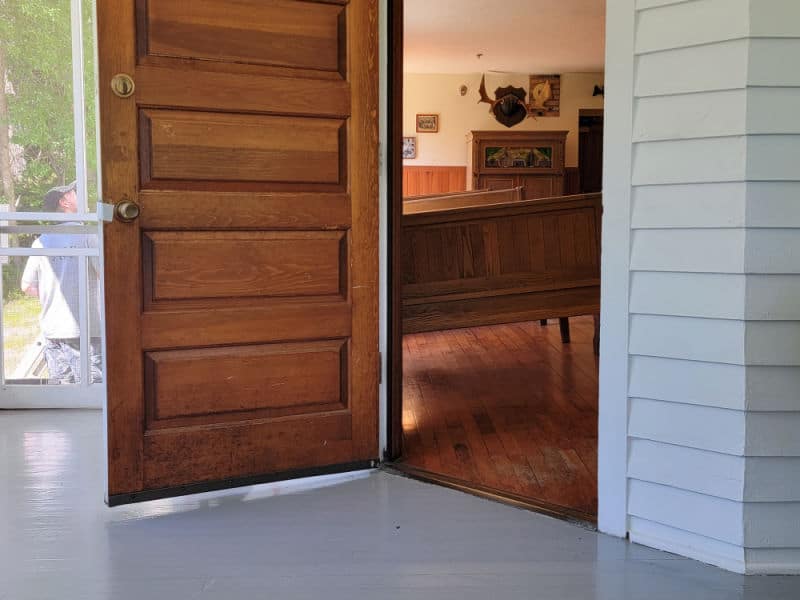 The Slanted Bar also known as the Lumberjack Saloon is the place to be in Kettle Falls. It is popular with both hotel guests and day use visitors. 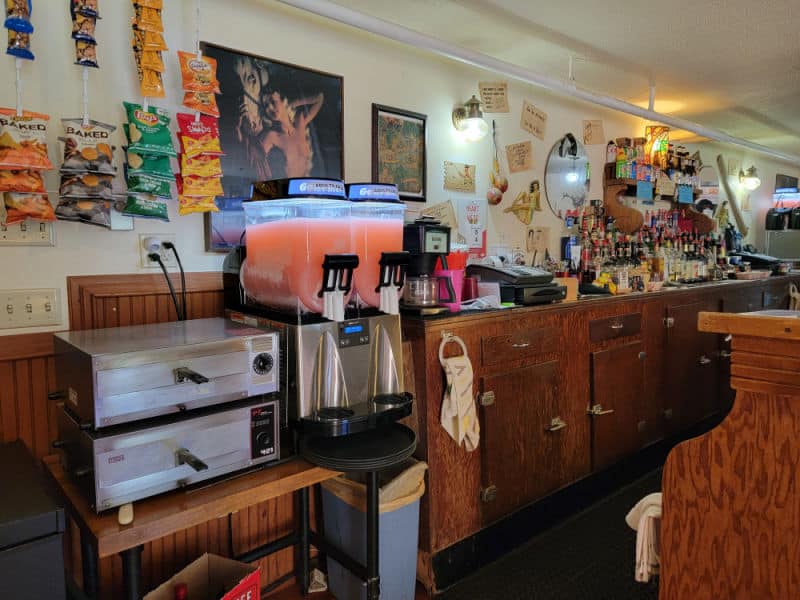 They are famous for their pink slushy vodka drinks. They have a full bar and lots of beer options to enjoy. 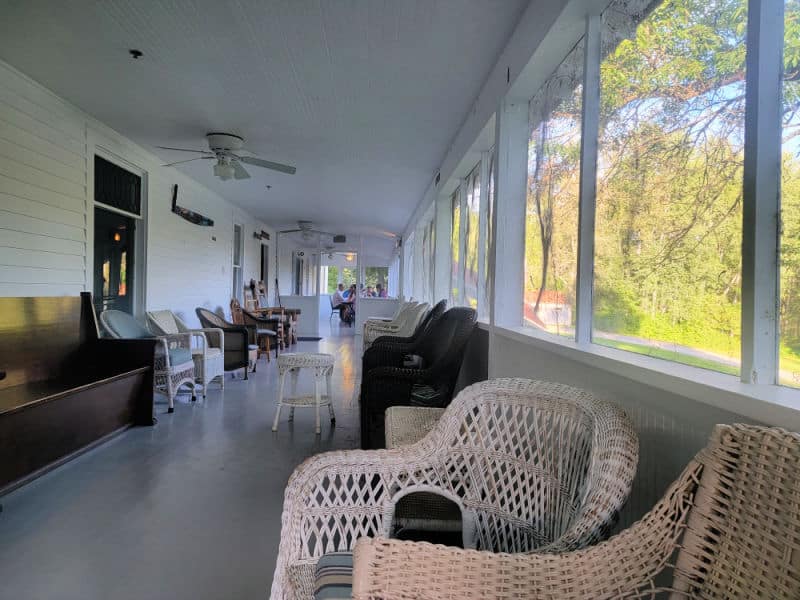 There is an epic covered porch that has rattan chairs lining it. This is the perfect place to enjoy a cold drink and talk with your new friends. We ended up meeting quite a few people while sitting on the covered porch.

It was truly amazing how friendly everyone was and how happy they were to talk about the area.

The Slanted Bar has pizza and pretzels available along with snacks. 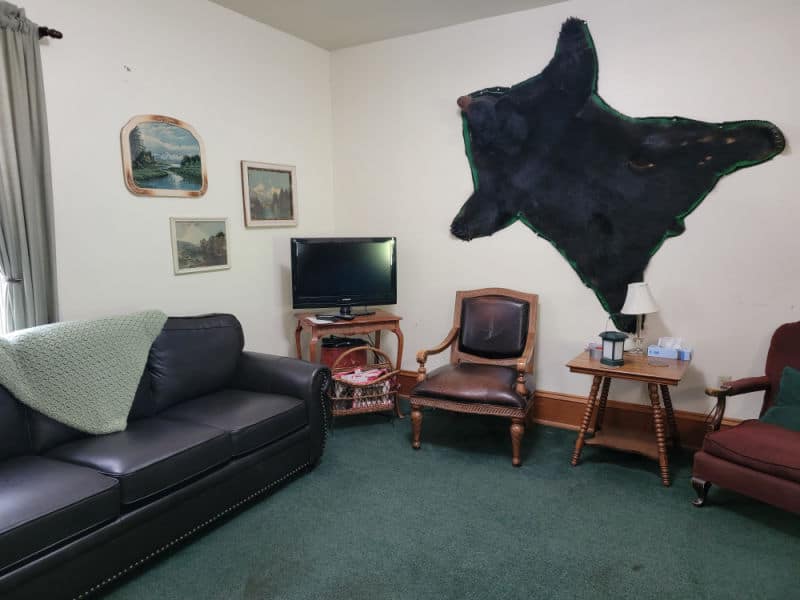 (mailing address only, Kettle Falls is out on the lake!)

Tourism in the Boundary Waters

Although people had been visiting the Boundary Waters since the 1800s, tourism was not a sector that flourished in the region. In the 1800s the area was visited mainly by hunters and  fishermen. Any tourists that did visit the region to fish, or explore the wilderness, did so in the summer months.

The area was found to be too remote and the terrain difficult to manage for all but the most adventurous tourists. In 1880 tourism picked up in the Rainy Lake area, as several summer homes were built by wealthy families and business men.

People traveled through the area that is now the Voyageurs National Park via the use of canoe portages, waterways, and tote roads that had been built by the loggers who worked in the area. As time went on, more and more tourists braved the wilderness.

Before Kettle Falls became a tourist destination in the early 1900s, the area was used by Native communities in the region for hunting and gathering. Members of the Native Nations tribes speared the sturgeon at the falls.

The portage became one of the main routes used by miners seeking gold in the Rainy Lakes region during the 1890 gold rush. The area was also used by commercial fishermen and later, loggers.

In 1910, construction began on the Kettle Falls dam bringing workmen to the area who needed accommodation. During this period, the portage started being used to smuggle liquor across the American-Canadian border.

Initially, the land on which the Kettle Falls Hotel currently stands was patented to be a homestead. Instead, the land ended up under the ownership of a surgeon from Minneapolis. The surgeon sold the land to timber baron William E. ‘Big Ed’ Rose.

It was Ed Rose who started building the hotel in 1910. Kettle Falls Hotel was rumored to have been financed by Madame Nellie Bly, indicating scandalous beginnings. The first patrons of the Kettle Falls Hotel were loggers, commercial fishermen, trappers, traders, and rum runners.

The Kettle Falls Hotel and the Williams Family

Williams was charged with selling illegal whiskey at the Kettle Falls Hotel and another Hotel he owned in Rainer.

Despite the issues surrounding the sale of illegal liquor, the Kettle Falls Hotel earned a reputation for serving great home-cooked meals and exceptional hospitality from the Williams family. The Kettle Falls Hotel became popular with recreational fishermen and families when the logging and commercial fishing industry declined in the area.

The Williams family evolved with the times, and In 1935, the Kettle Falls Hotel was equipped with electricity. The hotel was advertised as a ‘Hayfever Victims Sanctuary’ in the 1930s, due to the purity of the air. The hotel was expanded in 1946 with an addition known as the ‘big house.’

In 1976 the National Parks Service bought the hotel from the Williams family. The hotel was renovated in the late 1980s and remains a popular tourist destination for families and recreational fishermen.

Voyageurs NP Trip Report - Check out our entire trip to the park.