Montana holds the beauty of two great National Parks which each offer unique aspects of scenery, wildlife, camping, hiking, fishing, and other outdoor activities. Incidentally, Montana does not hold sole possession of either of its two National Parks. Glacier Park, located in the northwestern part of the state, combines with Canada's Waterton Lakes National Park to form Waterton-Glacier International Peace Park. At the southern pole of the state, Yellowstone National Park, America's first National Park, begins in Montana, edges into Idaho, and lies primarily in Wyoming. One's decision to visit one of these parks must be preceded by decisions of what you're hoping to experience.

Montana is full of history and swells with an abundance of wildlife for the avid outdoorsman in your family. The air here is crisp, unlike many other states within the United State of America. Montana covers an extremely large geographic area; 147,046 square miles to be exact. With a population of just over 1,000,000 people, the open space will be yours to enjoy! 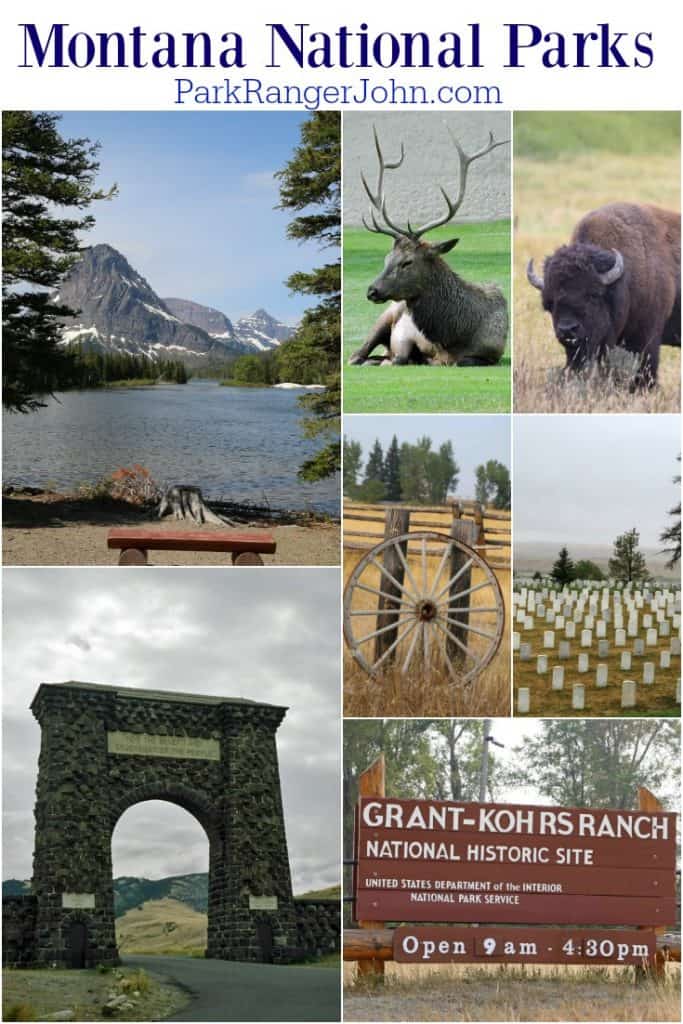 It was during the 1800s that Lewis and Clark trekked across this great state and had many successes while doing so. Many of the mountain streams, meadows, waterfalls, and canyons that Lewis and Clark visited while crossing Montana remain unchanged from that time period. Billings, Helena, Missoula, Great Falls, and Bozeman are all cities that offer historical sites as well as museums that reflect upon the experiences of Lewis and Clark.

Numerous historical sites and events take place along the Lewis and Clark Trail which treks through the vast land area which we know as Montana. History and stunning beauty come to life along the trail that Lewis and Clark blazed as they explored the American West, thus; the rest of the country was introduced to the Native Americans that lived in the area.

Montana is a state that offers stunning beauty along with mountain vistas that you will not find elsewhere. A vacation to Montana will leave you refreshed and thankful that you subjected yourself to clean mountain air. Once your vacation has ended, the family will probably be asking, "When can we go back to Montana?" That is when you will sigh and know that Montana was the perfect vacation choice for the family.

National Parks in Montana include one of my favorite National Parks...Glacier National Park! There is just something so special and amazing about this park. We try to visit at least once a year and would love to spend a few weeks visiting the park and exploring as much of it as possible. 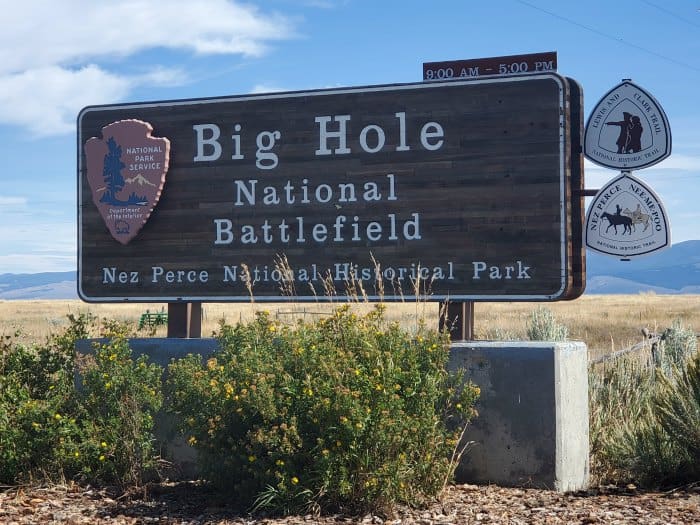 Big Hole National Battlefield is located in Southwestern Montana approximately 80 miles from Butte. The park is open year-round and offers visitors the opportunity to visit the visitor center and hike battlefield trails.

Five bands of Nez Perce fled the government's attempt to settle them in a reservation in 1877. A series of battles between the Nez Perce and US Army Troops occurred and became known as the Nez Perce War.

The Nez Perce set up camp in Big Hole Valley on August 7th believing they were far away from the US Troops. Unfortunately, Army scouts found them and soldiers attacked the Nez Perce on the morning of August 9th.

Big Hole National Battlefield is part of the Nez Perce National Historical Park. The visitor center has a great video explaining what happened to the Nez Perce. Hiking trails lead to the campsite were soldiers surprised the sleeping Nez Perce. 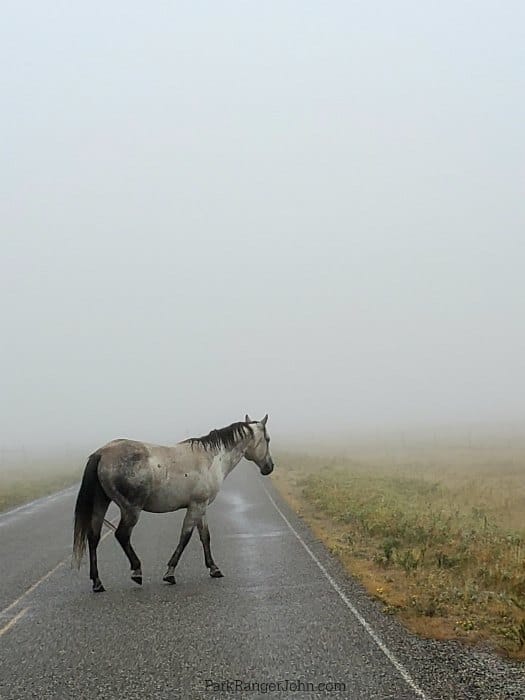 Bighorn Canyon NRA is located in Southern Montana approximately 90 miles southeast of Billings. The park is open spring through fall and offers visitors the opportunity to enjoy a ton of water activities, camping, hiking, fishing, and more.

Bighorn Canyon NRA straddles between Montana and Wyoming over 120,000 acres. The park was established in 1966 after the construction of the Yellowtail Dam on the Bighorn River.

Part of the national recreation area includes a section of the Pryor Mountain Wild Horse Range which is home to over 160 wild horses.

There are two visitor centers for the park with one in Montana and the other in Wyoming. The only direct route between the two sections of the park is via the water. 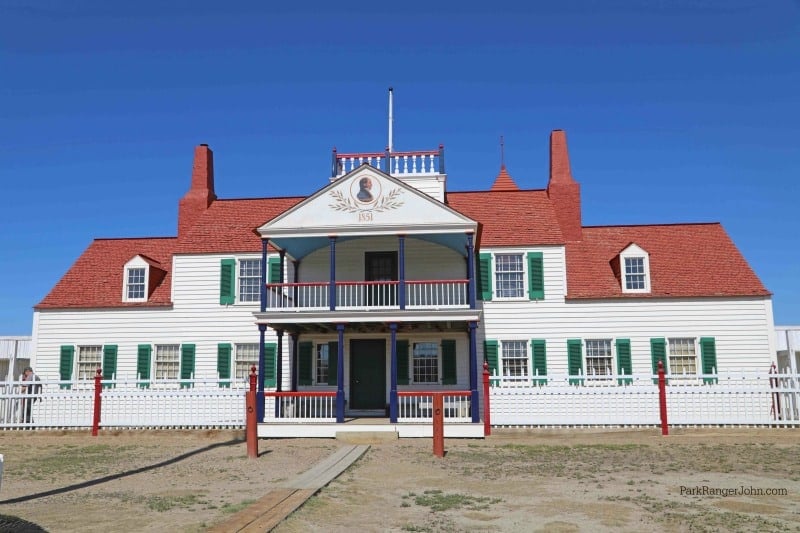 Fort Union Trading Post NHS is located along the Montana and North Dakota State Line. Fort Union was established in 1828 by the American Fur Company.

Buffalo Robes, beaver pelts, and other furs were in high demand in the mid 19th century. The fort was built to acquire furs from the Northern Plains tribes in exchange for knives, guns, blankets, alcohol, and more.

Fort Union had the longest working lifespan of any fur trading center along the Upper Missouri River.

Today visitors can explore a reproduction of the extensive fort that was originally in this location. The visitor center is located in the bourgeois House and has exhibits of life from the times of Fort Union.

There are hiking trails that lead around the Fort and great interpretive panels. 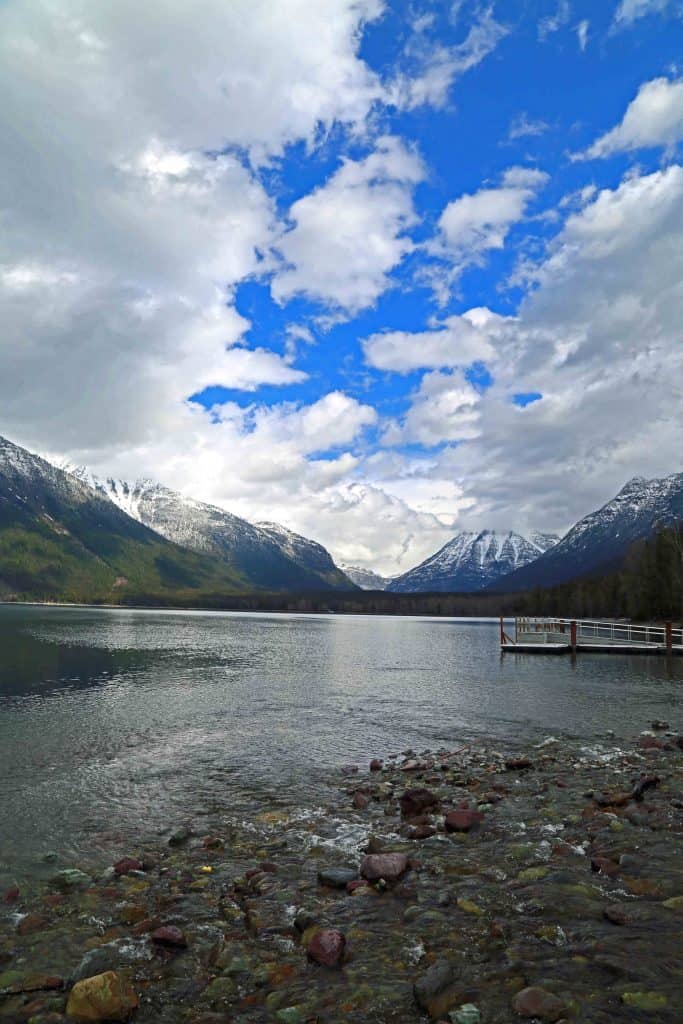 Glacier is one million acres of alpine meadows, forests, over 800 lakes, and over 200 waterfalls. It encompasses two sub-ranges of the Rocky Mountains, formed by glaciers millions of years ago. Its 260 species of birds and 70 species of mammals include grizzly bears, wolves, deer, mountain goats, and bighorn sheep.

Glacier borders Canada and Waterton Lakes National Park to the north, the Flathead River to the west, and the massive Bob Marshall Wilderness Complex to the south, one of the most remote and primitive areas left in the continental United States.

Take the aptly named Going-to-the-Sun Road through Glacier for some awesome views. Enjoy 700 miles of hiking trails. Take a bracing dip in one of the crystal clear lakes. Enjoy some fishing, canoeing, or just relaxing in nature.

Glacier gets by far the bulk of its visitors between June and September each year. The weather then is mostly warm and pleasant, but even in the summer, it can be erratic, with cold temperatures at night or in the higher elevations, and occasional fierce thunderstorms and hailstorms.

Conditions are primitive in the off-season, with many of the hiking trails snow-covered and inaccessible, campgrounds closed or not providing restrooms or running water, and many areas unsafe due to the risk of avalanches. The weather can be severe and unpredictable. A world record temperature variation (100 degrees difference between the high point and the low point in a 24 hour period) occurred in 1916 in Browning, just outside the park. 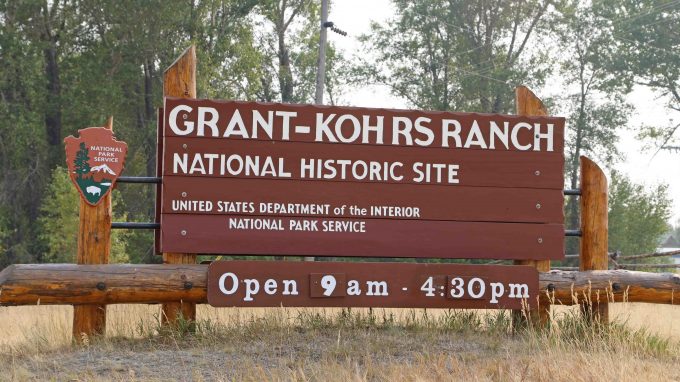 Grant Kohrs Ranch NHS is located in Western Montana approximately 45 miles west of Helena. The park is open Spring through Fall and offers visitors the opportunity to explore a working cattle ranch.

This amazing National Park site is focused on the early cattle operations of this part of Montana. The ranch is a working ranch that preserves the story of the cowboy and the role of cattlemen in American History.

There are more than 80 structures and buildings that include the historic ranch house with the original furnishings from the 1800s.

Additional buildings include the bunkhouse, blacksmith shop, horse barns, cattle sheds, and outbuildings that date back to the 1860s.

Tours are conducted of the main ranch house plus you can experience horse-drawn carriage rides, chuckwagon talks, blacksmith demonstrations, and cowboy presentations.

There are also seven miles of walking trails including a nature trail for exploring more of the park. 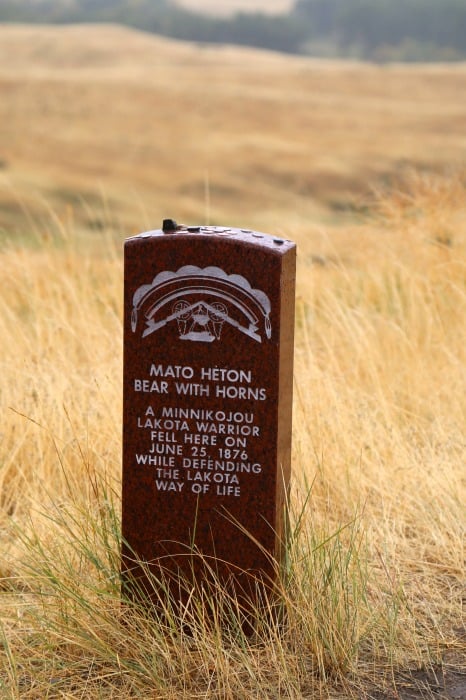 Within the Crow Indian Reservation, 3 miles from Crow Agency and 15 miles from the town of Hardin, Montana, is the site of the Battle of Little Bighorn.

The battle occurred on June 25-26, 1876, during the late stages of the United States Army’s ongoing efforts to pacify what was left of the Native American population and force them to live on reservations. Ultimately the Native Americans had no hope of prevailing, but on scattered occasions, they could certainly slow down the process and make the Americans pay a price for what they were doing. This battle was one such occasion.

Led by Lt. Colonel George Armstrong Custer, the Seventh Cavalry intended a surprise attack on a Sioux village. The surprise, though, was that they soon found themselves facing a force of Lakota Sioux, Cheyenne, and Arapaho warriors perhaps six times their size (this, and many details of the battle, remain very much in dispute). Custer and his men were annihilated.

Today, for $10 per vehicle or $5 per pedestrian, you can visit the site of the battlefield at Little Bighorn Battlefield National Monument, see the numerous memorials to the deceased (white and Native American), wander the area, and ponder the slaughter that occurred here over 130 years ago, and the bloody clash of cultures of which it was just a small part. 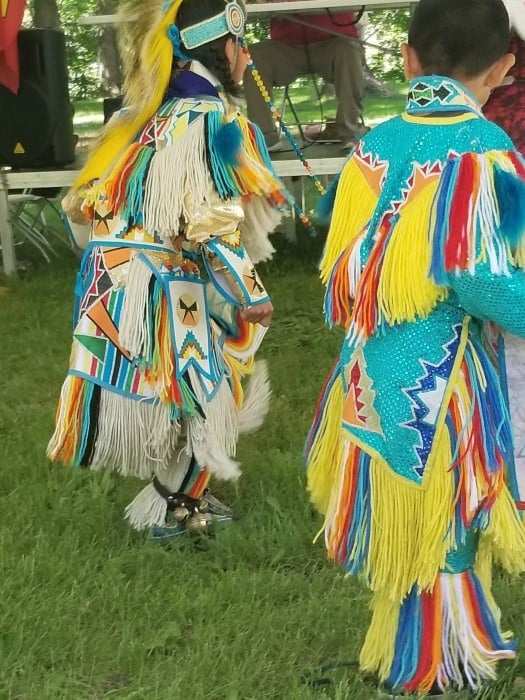 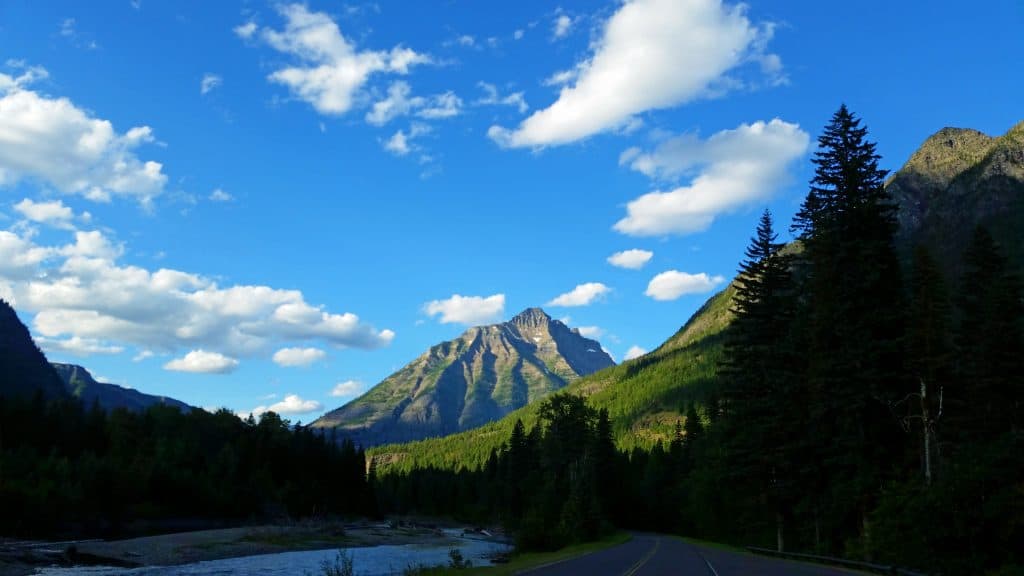 A visit to Montana without stepping foot in Yellowstone National Park would not be complete. Not only is the wildlife in abundance here, but visitors will have bragging rights that they will have visited the world's first national park that was established in 1872.

The 8 National Parks in Montana has over 5.6 Million visitors bringing in over $1.2 billion in economic benefits!