Joshua Tree National Park is a National Park of the United States located in the state of California. It is a desert area that includes parts of the deserts of Colorado and Mojave. Its name comes from a species of Yucca, found almost exclusively in this area, called Joshua tree.

The Joshua tree grows primarily in the Mojave Desert at elevations above 3000 feet and is abundantly scattered in the upper elevations parts of the Park.

The twisted, spiky Joshua tree is not actually a tree but a giant yucca plant that can grow up to 40 feet high with trunks up to 4 feet in diameter. It is believed that the Joshua tree can get as old as 700 years, however, because the plant does not have growth rings like a regular tree, it is difficult to tell its age. Joshua Trees produce huge white flowers in the spring, pollinated by the yucca moth, which spreads pollen and laying her eggs inside the flowers.

Joshua Tree National Park extends for about 1234 square miles, or 789,745 acres and a large part of the park dedicated to a wilderness area. Elevation ranges from nearly 2000 feet to over 5000 feet. Quail Mountain, at 5813 feet above sea level is the highest point within the park, while the lowest is 1780 feet at the Colorado River Aqueduct in the southern edge of the Park. 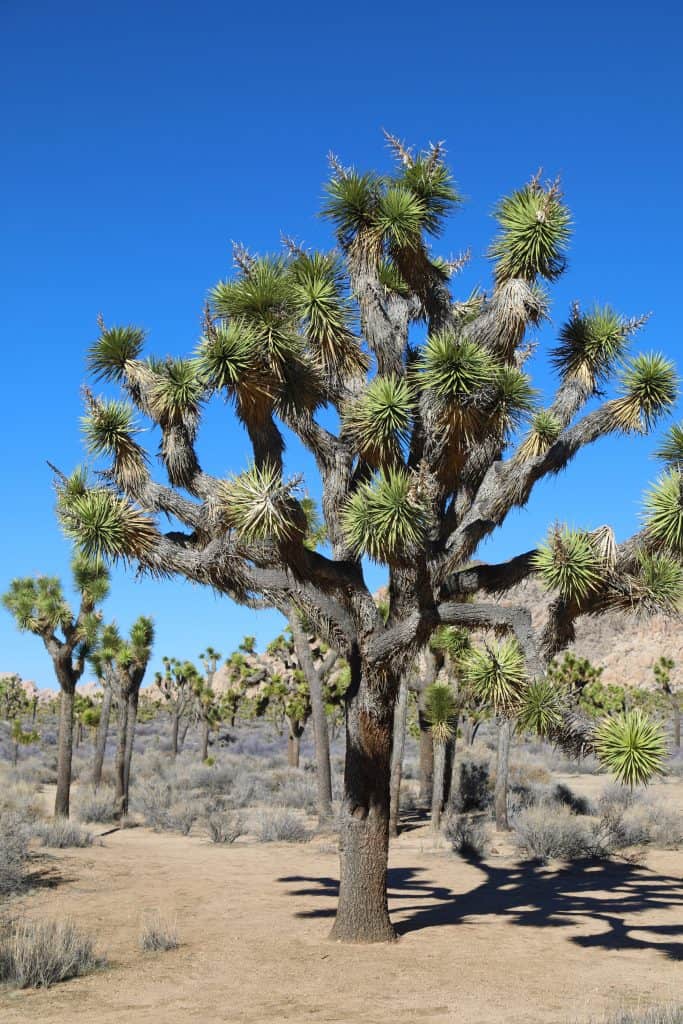 The park got its current status on the 31, October 1994, until that date was considered a national monument. The current preservation of the ecosystems of this park is largely due to Minerva Hamilton Hoyt (an American activist), passionate about the vegetation of the desert, who got President Franklin D. Roosevelt to proclaim the area as a national monument on August 8, 1936.

In 1976, the United States Congress designated about 420079 acres as a wild area and later in 1994, when the area was declared a national park, the protected area expanded by about 130,966 acres.

There are signs of human presence from five thousand years ago. At the end of the Ice Age, a hunter-gatherer people inhabited the area known as the Pinto river basin, now dry. It is proven that this basin was also dry when the first towns were built in the region. Later, Amerindian peoples (Serrano, Cahuilla, and Chemehuevi) moved to the area and left behind a legacy of cave paintings and ceramic artifacts.

The gold rush of the late 19th century brought explorers such as miners, ranchers, and farmers that built dams and dug mines, now abandoned and maintained only for historical interest. Today, the only human presence is that of park visitors.

The fauna of the park is diverse and adapted to life in the desert. Some of the most representative land species are hares ( Lepus californicus ), kangaroo rats, coyotes, rattlesnakes, red lynxes (Bobcat) and antelope squirrels among others.

At least 240 species of birds have been observed in the park. Some of the most common are: Roadrunners (chaparral birds), golden eagles, hawks, American kestrels and the common raven.

The flora is also adapted to the desert environment, being able to withstand the prolonged absence of water and exposure to the sun. The plants are dormant for most of the year, blooming just during the short wet season. The Joshua trees cover the Joshua Tree National Park, being the most representative plant in the area. In the desert area of Colorado, there are gardens of cholla cactus, ocotillo cactus, and chaparral.

The park is always open and boasts an annual visitation of over 1 million people each year. The number of visitors increases in the fall, as temperatures drop, but peaks in the spring during wildflower season.

The north entrances to the Park lie in the towns of Twentynine Palms and Joshua Tree Village and the south entrance is 25 miles from Indio. The tourist infrastructure of the park is underdeveloped and the only place to stay is a few simple campsites, most of which do not have running water. In the surrounding places, there are hotels. There are few roads and hiking trails.

An unpaved road in the south of the park gives an overview of its geology. The viewpoint at Keys View overlooks the Coachella Valley and the Salton Sea. There are also guided tours to an abandoned gold mine.

Check out all of the great things to do in Joshua Tree NP!

If you are planning a trip to this amazing park make sure and read our Joshua Tree NP Travel Tips! These will give you a great idea of what you need to know to truly enjoy the park.