Death Valley National Park is a national park in the United States located east of Sierra Nevada, in the state of California, but also extends (to a small extent) in the state of Nevada. It occupies an area of 3,340,370, including the Saline Valley, almost the entire Valley of Death, an important part of the Panamint Valley as well as diverse mountain ranges.

It is a park located in an arid zone and contains one of the largest desert reliefs in the continental United States. The lowest point of Death Valley, known as Badwater, is located 280 feet below sea level, while Mount Whitney, located about 130 miles by road and just over half in a straight line, has a height of more than 14,400 feet above sea level. The heart of the park, called Death Valley National Monument, was created in 1933. It was promoted to the category of National Park in 1994, the date in which it was extended considerably. In addition to the central part of the park, a small area known as the Devil's Hole is located in eastern Nevada, near the Ash Meadows National Wildlife Refuge. 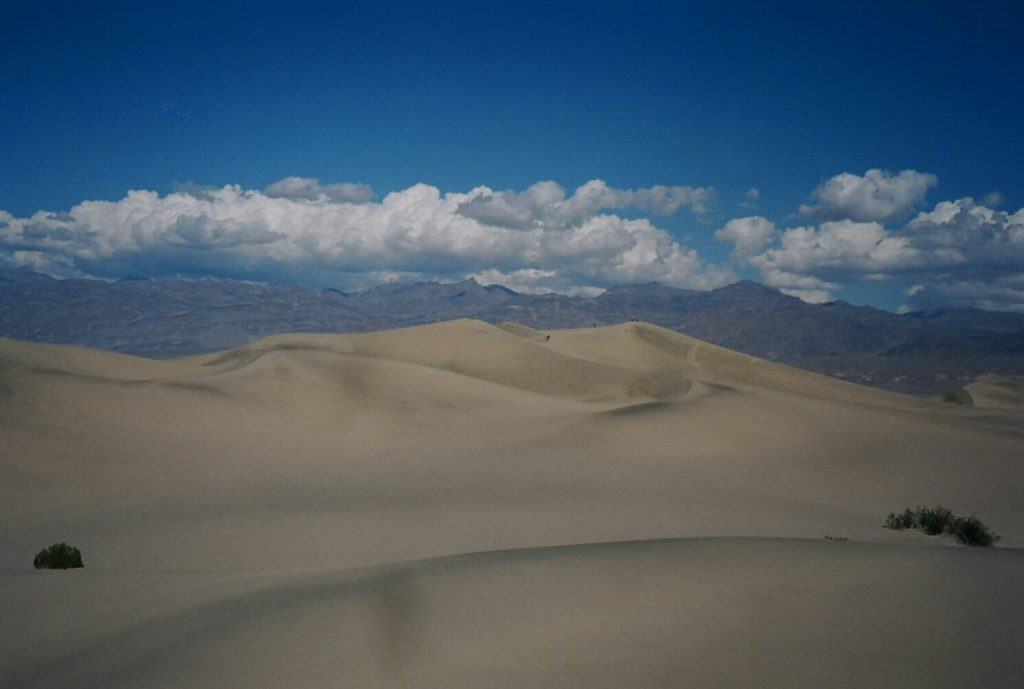 The park is formed by two main valleys: Death Valley and Panamint, both formed during millions of years. It is separated from the Pacific Ocean by five mountain ranges that completely dry the oceanic air that carry moisture. The Death Valley is one of the hottest places on Earth and in the month of July of 1913 recorded 134 degrees and it was reached in the Badwater Basin.

The soil of the Death Valley National Park is rich in various minerals, such as borax, which was exploited for a long time by a mining company that used it in the manufacturing of soaps. The refined final product was transported through the valley by large carts pulled by groups of 18 mules and two horses that gave the name of the brand of soap - 20 Mule Team.

The Bighorn sheep live in the park and its surroundings which is a rare species found in small isolated herds in the Sierra and in Death Valley National Park. These animals are very adaptable and can eat almost any plant; they do not have known predators and their greatest danger is losing their natural habitat.

The first tourist facilities documented in the Death Valley National Park were a group of stores built in the 1920s. People began to go to the facilities built near natural sources as they considered that they possessed healing properties. In 1927, one of the borax operating companies converted the Furnace Creek Ranch, which until then served as the team's headquarters, into a tourist resort. The water source that was Furnace Creek was channeled to allow the development of the resort which caused the surrounding lands and swamps to start drying up. Very soon the valley became a very popular destination and more facilities were built.

Although the lack of water is a general feature throughout the park, you can see different natural environments inside. The vegetation is varied, staggered and adapted to dryness: shrubs, such as Larrea tridentata or Prosopis glandulosa in the valley; in the high areas there are pine trees and Yucca brevifolia also known as Joshua trees. There are about 1,000 different plant species, of which 23 are endemic.

The fauna is also diverse: you can find 51 native species of mammals, 307 species of birds, 36 species of reptiles, 3 of amphibians and 2 of fish (in the area of Salt Creek and Cottonwood Marsh). Although small mammals are more frequent, coyotes, foxes, lynxes, cougars and mule deer can also be found in the park.

Charcoal Kilns were built in 1867 to transform pine nuts into charcoal that were later used as fuel in the valley mines. They were restored in 1971 by a group of Navajos.

Dante's View offers a special panoramic view of the central area of the park thanks to its height, about 5,570 feet above sea level.

Devil's Golf Course is an area of salt flats in which a series of holes have been formed that give the place a strange and ghostly appearance.

The sand dunes are located north of the valley. Thanks to the ease of access by road, the dunes have appeared in various Hollywood productions, including the Star Wars series.

Racetrack Playa is a dry lake bed famous for its sailing stones, large rocks that move by the action of natural forces, without human or animal intervention. Although they move up to 5 miles per hour ( fast, considering they are rocks) no one has seen their movement in person.

Zabriskie Point offers a view of multicolored geological formations. It was one of the areas where borax exploitations were carried out. The director of cinema Michelangelo Antonioni made in 1970 a film with this same name.

Check out all of the amazing things to do in Death Valley!

If you are planning a trip to Death Valley check out these Death Valley Travel Tips for all the things we wished we would have known planning our first trip to the park.