Epic guide to Cesar E. Chavez National Monument in California including history, things to see and do, how to get to the park, and so much more. 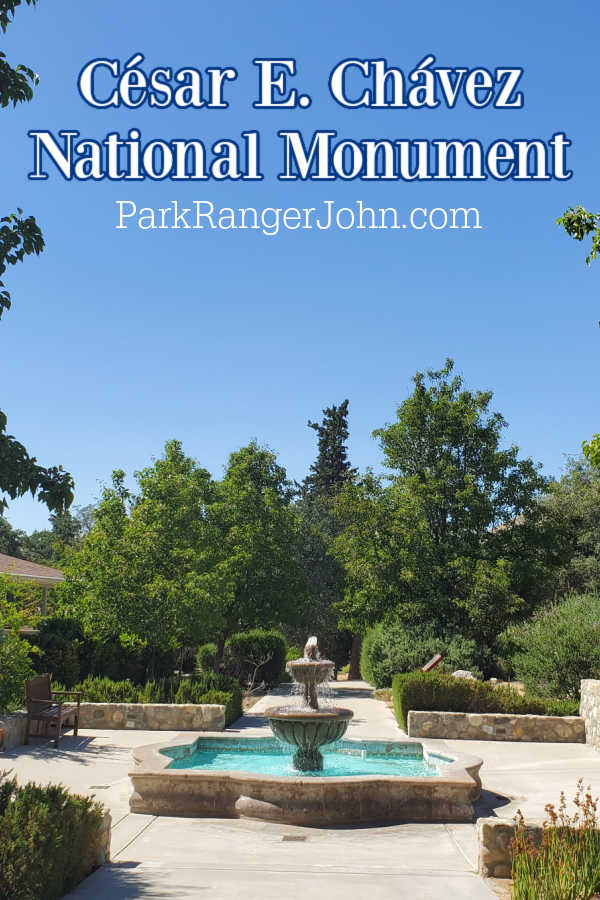 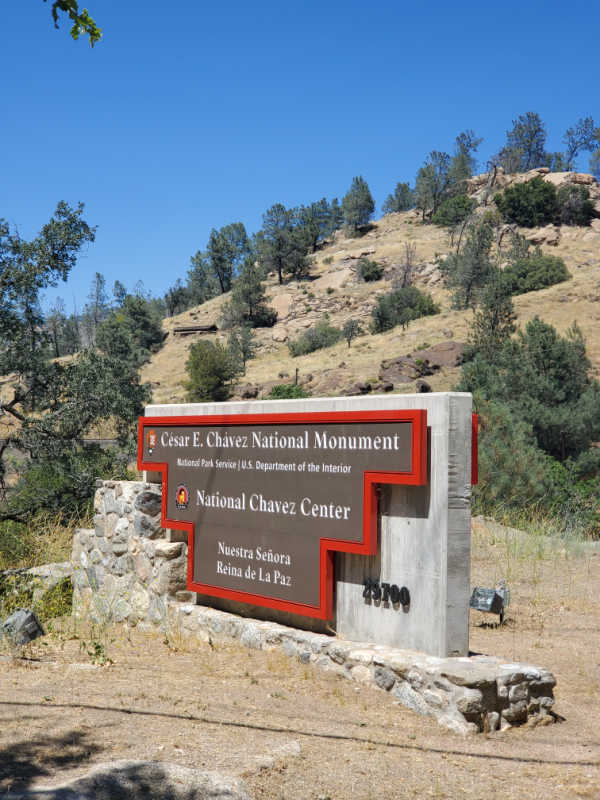 "When the man who feeds the world by toiling in the fields is himself deprived of the basic rights of feeding, sheltering, and caring for his own family, the whole community of man is sick." ~César E. Chávez

Cesar Chavez became the leading figure for the fight for better pay and safer working conditions for agricultural workers starting in the 1960s.

These political efforts led to the formation of a labor union that would eventually become the United Farm Workers of America.

Mr. Chavez also worked to create legislation that gave agricultural workers the right to organize and negotiate for better conditions in the farm fields and pension benefits.

Yes! The park amazed us and we hope that more people visit to learn about the work that Cesar Chavez did that continues to impact lives today. 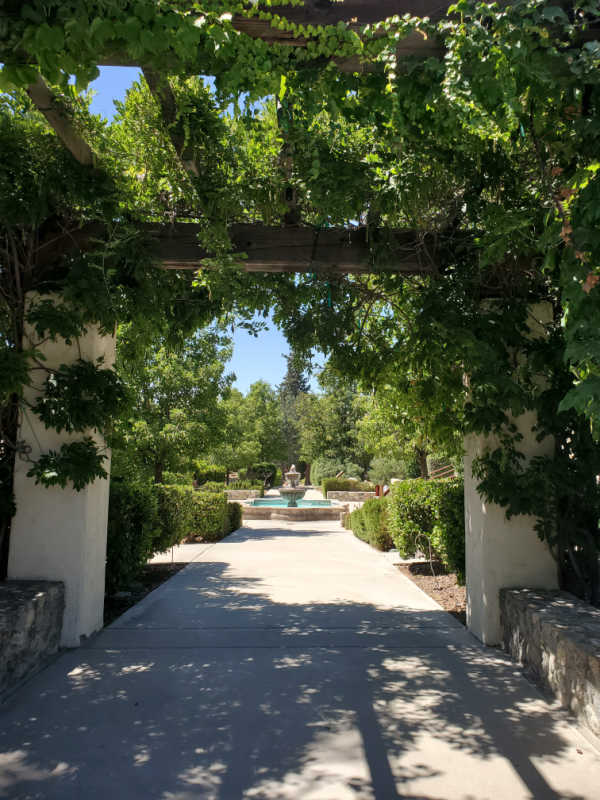 This property was the main office of the United Farms Workers (UFW) and was the home of activist César Chávez from the 1970s until his death in 1993.

Césario Estrada Chávez was born in 1927 in Yuma, Arizona.  His Mexican grandfather, Césario, whom César was named after, had crossed over into Texas in 1898 with his wife and eight children.  He bought a farm in Yuma and established a successful wood hauling company in the early 1900s.

César was raised in the same area with six brothers and sisters.  He was raised Roman Catholic and had a comfortable, loving childhood in a typical extended Mexican family.

In 1944, Chávez joined the United States Navy and once honorably discharged, became an agricultural laborer and joined the National Farm Labor Union in 1947.

Chávez married Helen Fabela in 1948 and they eventually had eight children together.

In turn, Father McDonnell invigorated Chávez to become passionate about books.  He loved reading about non-violent activists such as St. Francis of Assisi and Mahatma Gandhi, men whose lives greatly spoke to Chávez.

In 1962, Chávez founded the National Farm Workers Association and in 1972, this group joined with another to form the United Farm Workers.

Chávez fought the grape growers for years to champion for fairer compensation and better work conditions.

In 1965, he organized a nationwide boycott of California grapes.  He even led a 340-mile march from Delano to Sacramento in 1966.

In 1968, he undertook a 25-day hunger strike which was highly publicized around the country.  In 1970, the boycott finally ended when grape workers were granted higher pay and the right to unionize.

Chávez spent the rest of his life working for what he called “la causa” (the cause).

He was passionate about helping struggling farm laborers and securing improved working and living conditions by peaceful protests and negotiating with employers.

During the 1970s, Chávez continued his efforts, mainly in Arizona and California, to fight for worker’s rights.

In the 1980s, Chávez focused on the issue of pesticide dangers for agricultural workers and their children.  It was in 1988 that he went on his third hunger strike, lasting 36 days.

It is believed that the hunger strikes at this age contributed to his failing health and in 1993, at the age of 66, Chávez passed away in his sleep.

Many considered him a champion activist throughout his life including Robert Kennedy and Jesse Jackson.

A year after Chávez’s death, President Bill Clinton awarded him the posthumous President Medal of Freedom.  When Barack Obama campaigned for President he used the famous Chávez slogan: Si, se puede or “Yes we can!”

It was during Obama’s presidency in 2012 that the César Chávez National Monument was established.  Funding for the establishment was given by the National Park Service and also the American Latino Heritage Fund.

The National Monument encompasses the headquarters for the United Farm Workers, the home where Chávez lived for nearly 20 years, and also the gravesites of Chávez and his wife Helen.

Known by the Chávez family as Nuestra Señora Reina de la Paz, or “La Paz,” certain areas of the monument are not accessible because family members still reside there.

The history of the area itself is long and historic.  Before it was home to Chávez and the UFW, it included subsistence activities for native peoples, a quarry, and also a California State Hospital that specialized in tuberculosis.

Chávez traveled continually during his fight for civil rights, but it was known that the land of La Paz and being with his family always gave him renewed strength.  He enjoyed walking the mountainsides, praying, meditating, attending Mass, and gardening.

During the 1970s, all of the UFW’s administration staff moved on to the La Paz property.

Other organizations eventually opened offices at La Paz also including the NFWSC (National Farm Workers Service Center), a union newspaper, a training school for labor contract negotiators, and even a radio station.

The entire spectrum of groups which achieved many accomplishments in the space of civil rights is evident at La Paz.

To its most famous activist, the profound effect this “retreat” property had greatly supported his life and passionate fight for civil rights. 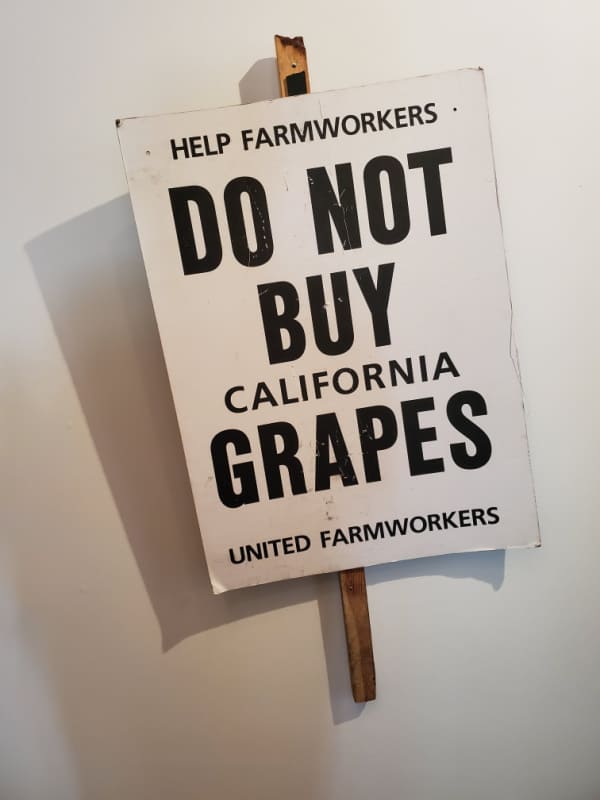 Things to know before your visit to Cesar E. Chavez National Monument

Pets are permitted on paved surfaces, including footpaths, parking lots, and roads.

Free WiFi is offered at the park's visitor center by the National Chavez Center.

There is a nice parking area near the visitor center.

Cesar Chavez NM is part of the 2014 Passport Stamp Set.

There is at least 1 EV Charging Station in Keene, California. 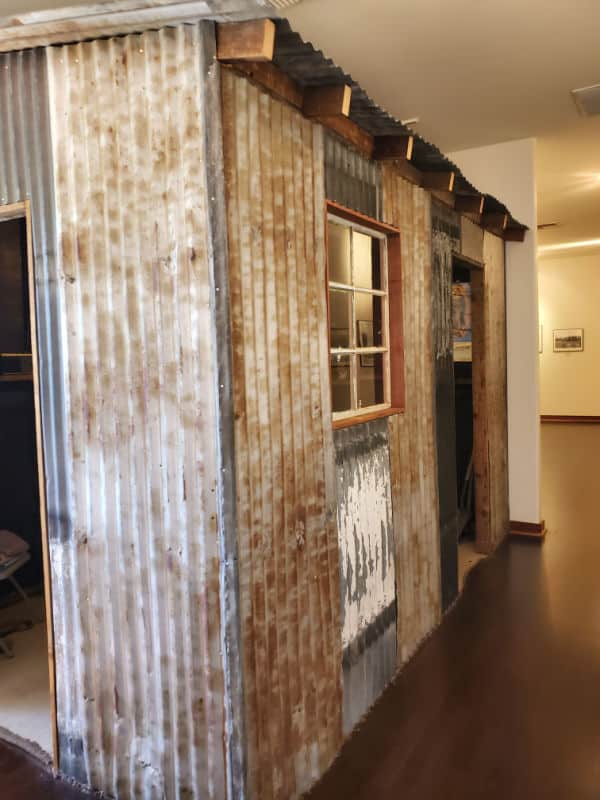 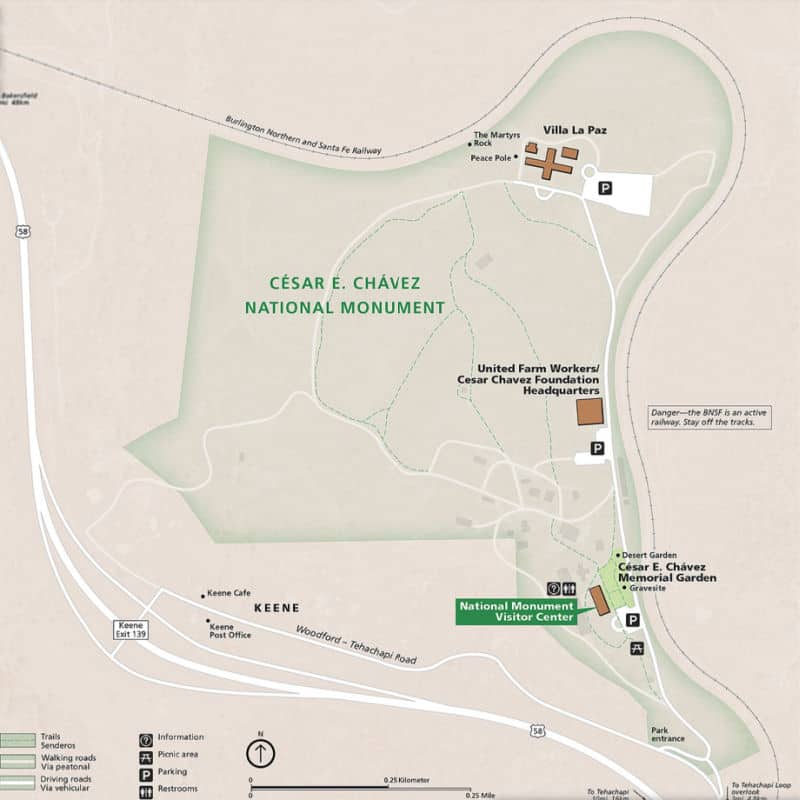 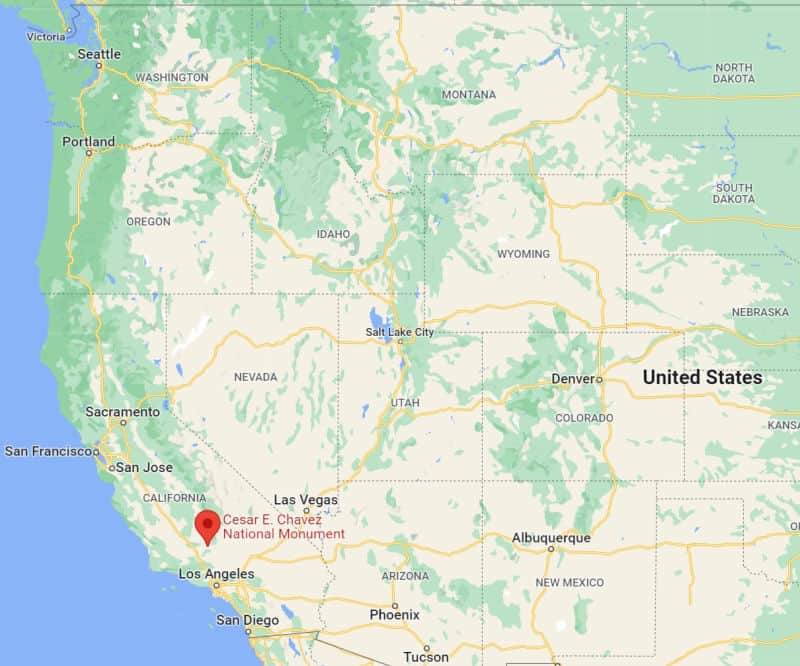 The visitor center is located near the parking area. 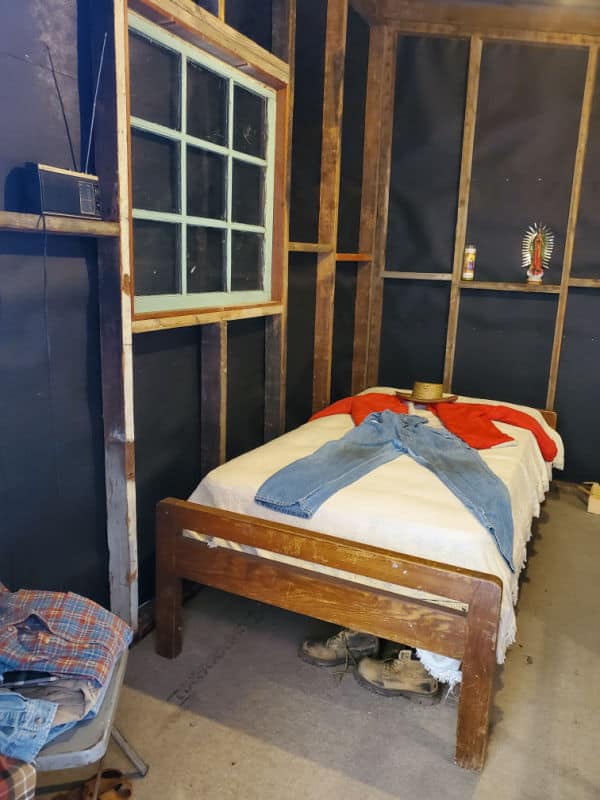 The monument is located near the town of Keene, California, on Highway 58. Take exit 138 toward Keene, then turn right on Woodford-Tehachapi Road. César E. Chávez National Monument will be on your left. 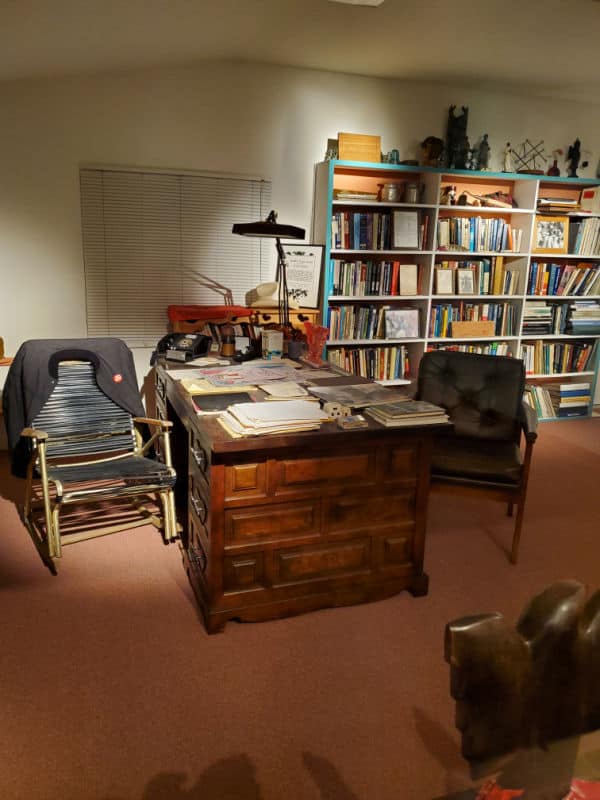 The best time to visit the park is honestly any time you can get there. Summers will be hot but this park is worth visiting no matter what the weather is.

The hottest weather is from June 8th to September 20th with the average daily temperatures above 91 degrees.

The coldest weather is from November 19th to February 23rd with an average daily temperature below 66 degrees.

The rainiest weather is from October 25th to April 22nd. 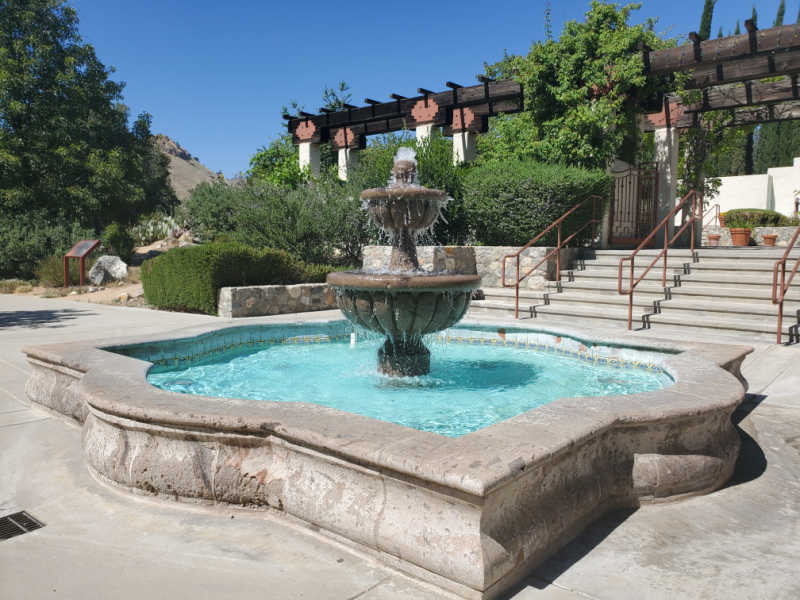 Best Things to do in Cesar E. Chavez National Monument

We suggest planning at least a few hours for visiting the park.

The Visitor Center contains César Chávez's office (which still houses original furnishings and artifacts), César’s office remains as it was when he was active at La Paz from 1970 to 1988.

There is a 12-minute video available in the visitor center that talks about why the national monument was built at La Paz and the work that was done on the land. 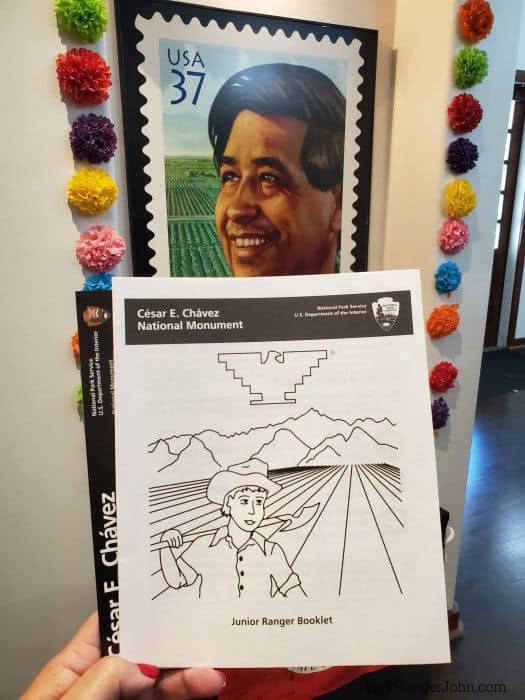 The Junior Ranger program can be completed while visiting the visitor center. The activities that need to be completed are based on the age of the participant.

Don't miss the replica of a Migrant Worker home. This replica gives you an idea of what life was like for farmworkers in California. This home showcases the horrible conditions workers lived in during the 1960s.

César’s office remains as it was when he was active at La Paz from 1970 to 1988. The administrative building that housed the office had deteriorated to such a degree that it could not be saved.

The walls were left in place when the building was demolished. Upon completion of the new building, each object was returned to its previous spot, and a window was installed to allow visitors to view the office and its contents.

You can listen to Cesar Chavez's granddaughter talk about the lessons she learned from her grandfather in both Spanish and English.

The Chávez Memorial Garden contains the gravesite of César Chávez and his wife Helen along with their two dogs.

There is a beautiful fountain along with a rose garden with roses named after Mr. Chavez.

There is a great desert garden with a pathway through it filled with plants native to Arizona where Cesar Chavez grew up.

How to beat the crowds in Cesar E. Chavez National Monument?

We did not see another visitor during our time in the park. Our best suggestion for beating the crowds at any National Park Site is to visit mid-week. 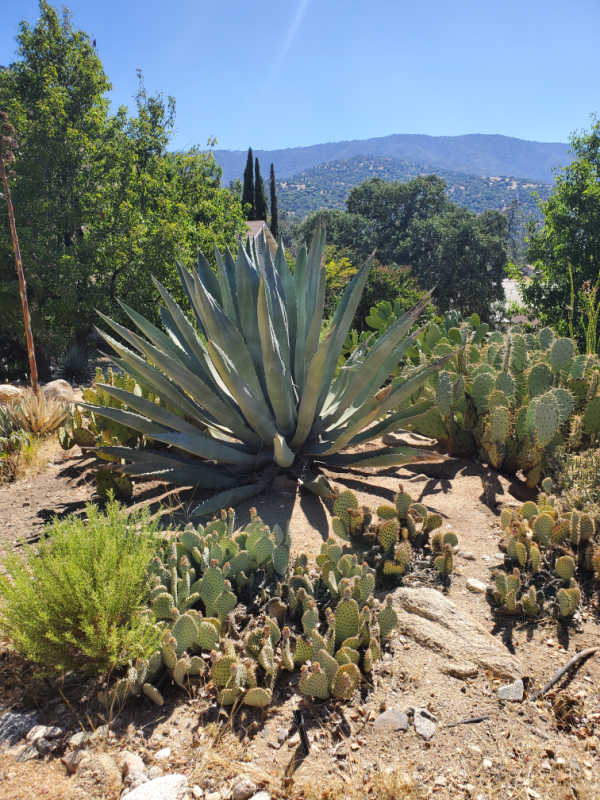 Where to stay when visiting Cesar Chavez National Monument

Nearby lodging can be found in Bakersfield, California and surrounding communities.

Holiday Inn Express Hotel & Suites Tehachapi -  take advantage of free continental breakfast, laundry facilities, and a fireplace in the lobby. For some rest and relaxation, visit the hot tub. Stay connected with free in-room Wi-Fi, and guests can find other amenities such as a gym and a business center.

There are vacation rentals available in Keene and Tehachapi, California.

Click on the map below to see additional vacation rentals and hotels near the park.

There are no National Park Campgrounds within Cesar E. Chavez National Monument.

This campground offers lodging, RV and Tent Sites, a pool, and more.

This campground offers lodging and RV sites, hiking, and more. 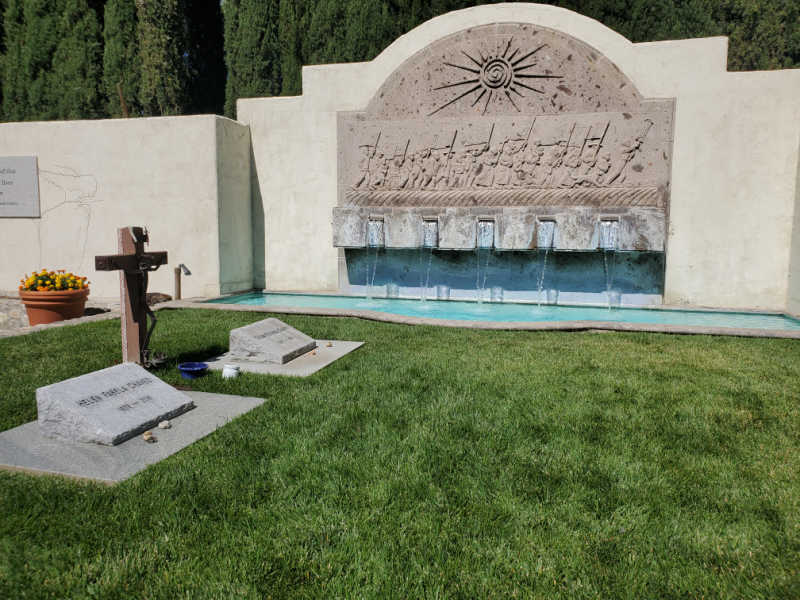 Who Was Cesar Chavez? Paperback

Who Was the Voice of the People?: Cesar Chavez: A Who HQ Graphic Novel

Cesar Chavez (On My Own Biography)

The Crusades of Cesar Chavez: A Biography 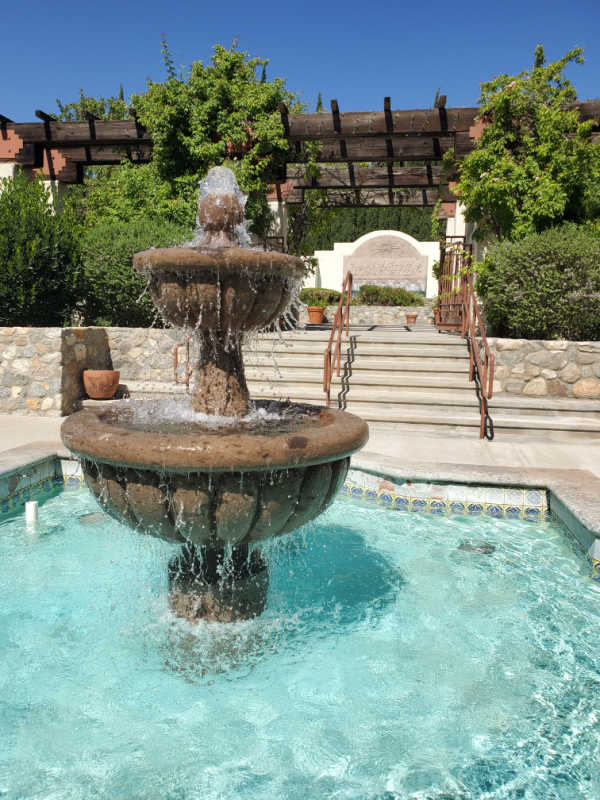