On misty winter days, they rise like grotesque forms from the sea, standing gaunt and forbidding against the darkened horizon. Calls of seabirds mingle with the incessant yelping of sea lions and the occasional song of the whale.

Close to the shore, the chill of salt spray penetrates the soul as the Pacific surf pounds away against hard but yielding rock. These are the Channel Islands, eight mountainous islands that lie off the coast of California, interrupting the horizon with their big, hulking shapes.

The four northernmost, Anacapa, Santa Cruz, Santa Rosa, and San Miguel, form an east-west chain. The distance between any two of them is not more than five miles, close enough for the wind on some days to carry the barking of sea lions and the squawk of birds from one to the next.

Together with tiny Santa Barbara island 40 miles to the south, these four bits of land and the sea around them make up Channel Islands National Park. 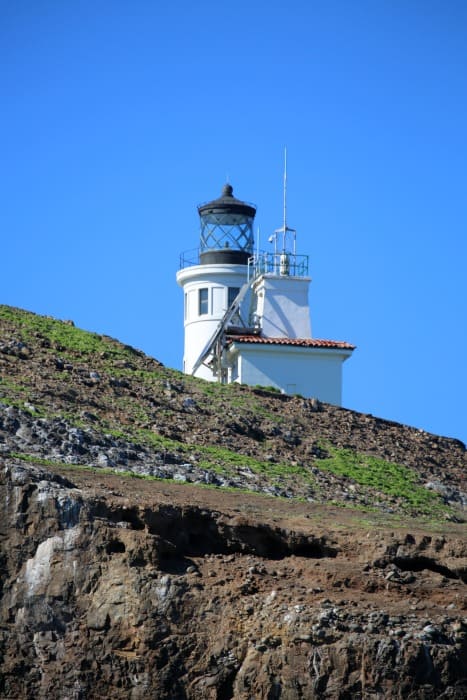 It is not surprising that these islands look like mountains, because they are. Though only their tops are visible, if the ocean were drained we would see the base of the mountains as well as smaller peaks, hills, and valleys, all strikingly similar to the mainland terrain.

The similarity is more than superficial: the four northern islands are actually the seaward extension of the Santa Monica Mountains (Santarosae, they call it) that became four separate pieces when glaciers melted, the level of the ocean rose, and water flowed into the low-lying areas.

Over thousands of years the sea, along with winds and rains, beat down the islands to their present size and shape. By no means does "present" mean "final," for the erosion continues. Wind and water are like perfectionists, never completely satisfied with what they have done.

A Triumphant Arch
One spectacular example of nature's handiwork is Arch Rock, 40 feet high and standing straight up from the sea near Anacapa as if it were the grand entranceway to the park. At one time, this huge piece of rock may have been part of Anacapa, but now it lies apart, hollowed by the wind and sea into its intriguing, intricate shape.

In other places along the islands' shores, a variety of landscapes bear witness to the power of the surf, narrow beaches, deep sea caves, and shallow tide pools that are marvelously accessible microcosms of the sea. Seaweeds weave a multihued carpet on the tide pool floor; sea anemones nestle together, their tentacles resembling flowers in bloom.

Home to starfish, abalones, periwinkles, limpets, crabs, and other small creatures, tide pools offer mystery and magic and miracles too; even where ebb tides expose the inhabitants to the air, life survives. 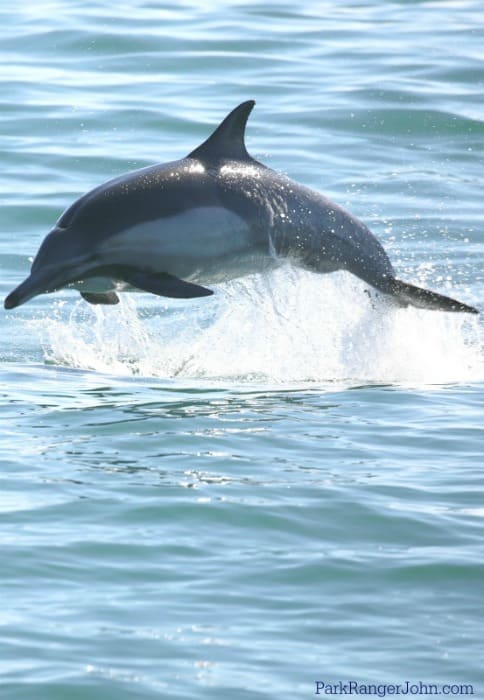 Whales, Wildflowers, and Waterfalls
In deeper water, dense stands of kelp, which view with bamboo for the title of the fastest-growing plant in the world, sway with the waves like palms battered by gate-force winds.

Kelp are giant algae, attached to the ocean floor by suction feet called holdfasts. From there they rise more than a hundred feet to the surface, where the leathery yellow-brown fronds form a tangled floating mat. Just below the surface, air-filled bulbs serve as buoys, holding the tall vines upright.

Many sea animals find food and shelter in the great kelp forest. Mollusks and worms cling to the thick brown stalks. Tiny shrimp abound. Bronze-colored swordfish, blue-black bonitos, and red-gold garibaldis slide gracefully among the fronds; torpedo-shaped sharks and barracuda swim sleekly through the vines, able to any unsuspecting prey.

Each December gray whales, migrating south from their summer feeding grounds in the Arctic, stop by the Channel Islands to partake of the bountiful harvest, to nourish themselves on the small forms of life. The warm lagoons of Baja California, some 5,000 miles from the Arctic, are their ultimate destination.

There females bear their young, each usually giving birth to a single calf; sometimes mother and baby can be seen traveling back north together, especially when they venture near the islands' shores. Though by no means as large as their cousin the blue whale, the grays are no Little Leaguers. They weigh up to 20 tons, measure up to 45 feet in length, and spout a misty fountain and impressive 15 to 18 feet high when they come up for air.

Thousands of birds in raucous variety feed on the abundant food. Some, like double-crested cormorants, brown pelicans, and pigeon guillemots, dive for fish; surfbirds and oystercatchers prowl rocky shores for shellfish and other tasty morsels.

And morsels there are in plenty, life here is superbly diverse, thanks to the convergence of cold currents from the north and warm ones from the south. Species usually found in separate climes thrive in this in-between world. 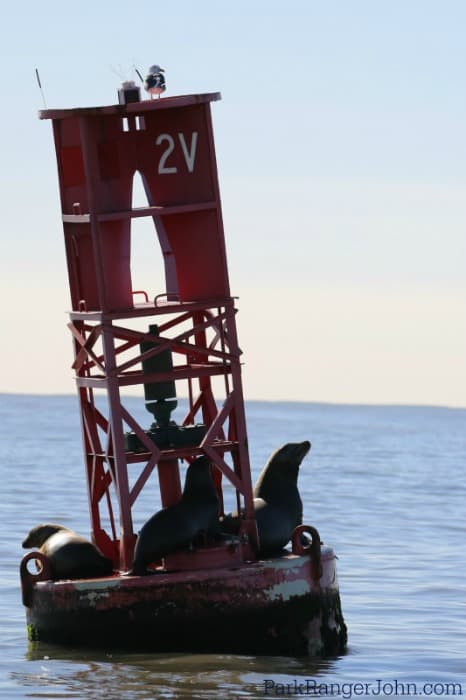 Most marine birds nest on the high, pockmarked cliffs of the islands, where they command a panoramic view of the sea, but western gulls, a snowy white and slate-black species, make their nests right on the flatlands.

Each spring, acre after acre of Santa Barbara's meadows is dotted with their nests. A female lays three eggs with dull mottled shells that blend in with the browns and greens of the landscape, hiding them from hungry marauders. Hatched by June, the chicks, like the shells they pecked their way out of, resemble the colors of the ground.

Despite their camouflage, they are not left on their own to survive: the mother stays with the nest to defend her offspring while the father fishes near shore and brings back his catch. Two months later, the fledglings take their first flying lessons, quickly learning the flight patterns of the adults: sweeping those great circles in the sky and soaring on motionless wings. They also learn to pick up mollusks and other shellfish, drop them against rocks from on high, and scoop out the insides for a juicy snack.

Black storm petrels with their hooked beaks, rare Xantus' murrelets with their high-pitched cries, black oystercatchers with their brilliant red bills and long courtship flights, all enjoy the safety and seclusion of isolated Santa Barbara.

The place is serene. Salt-laden breezes drift in from the sea, a girdle of bold cliffs surrounds a gentle grassy plateau, and the only disturbance is the birds' loud screeches and the sea's steady roar. Despite the fact that there is no year-round freshwater on the island (which restricts vegetation to shrubs and low-growing plants), millions of wildflowers festoon Santa Barbara from winter through early spring.

Acres of brilliant white morning glories, giant yellow coreopsis, goldfields, and pink-and-white-blossomed ice plants, their leaves always seem to glisten with frost, make it look as though Joseph's coat of many colors had been draped gently across the land.

Earlier in the year, during the rainy season, the focus of the island is not wildflowers of seabirds, but water. On occasion, heavy downpours turn dry gullies into aggressively raging brooks and streams. With no trees or large shrubs in the way to divert their path, torrents rush downhill, shooting off cliffs in roaring waterfalls that cascade 300 or more feet into the sea. When the rains stop, the falls slacken to a trickle and then are no more, until the next deluge.