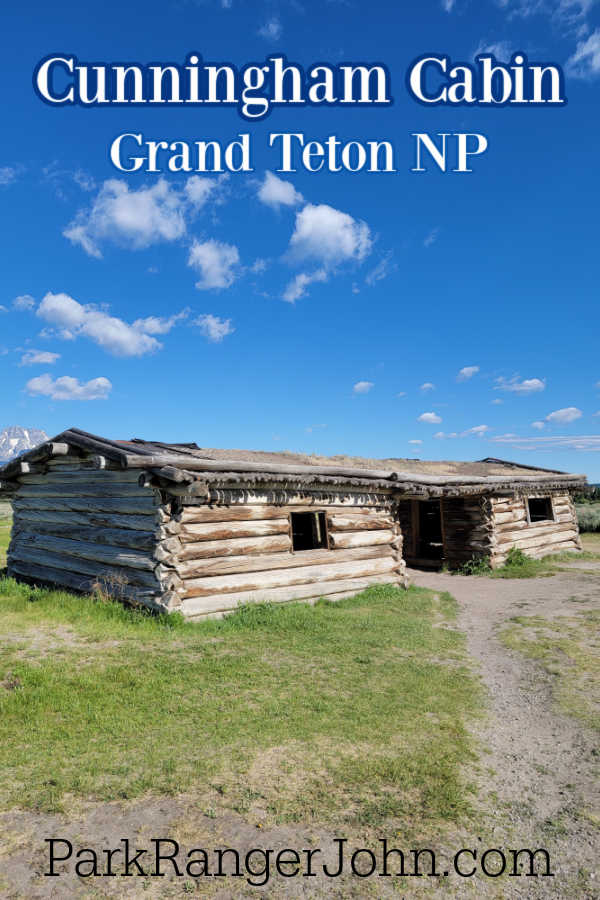 You may have seen the iconic Grand Teton National Park photo through a historic window with views of the Teton Range.

This photo is taken through the historic Cunningham Cabin. You can easily take this photo by taking a short walk to the cabin. 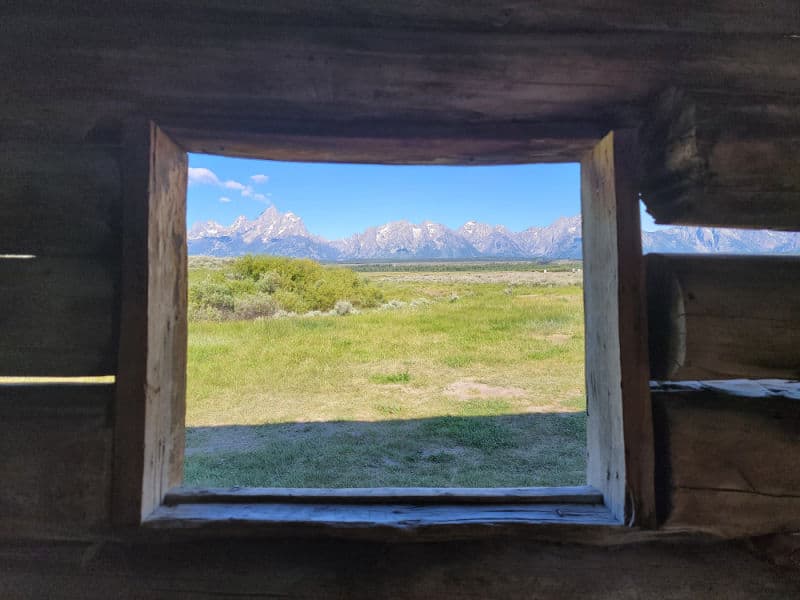 This historic Cunningham Ranch cabin was established as the Bar Flying U Ranch by J. Pierce Cunningham in the 1880s.  Today this cabin is one of the few remaining homesteading era cabins in Jackson Hole.

When visiting the Cunningham Cabin, you can walk to the cabin and take a 30-minute walk around the property.

If you walk around the property, you have the opportunity to see the foundation of the original barn, shed foundation, depressions that remain from the outhouses, and remains of the fenced corral.

When visiting the cabin, you will notice the floors are dirt. When the Cunninghams lived in the cabin, they lived with the dirt floor and swept it to keep it clean.

The cabin is constructed in a "dog trot" style also called a double pen log cabin. This style consists of two small cabins joined by an open-covered breezeway.

The logs of the cabin were secured with saddle notches in the corner.  The roof was constructed with sapling poles that had dirt and earth piled on top of it.

When you look at the cabin you will notice that no nails or metal fasteners were used to construct the cabin. 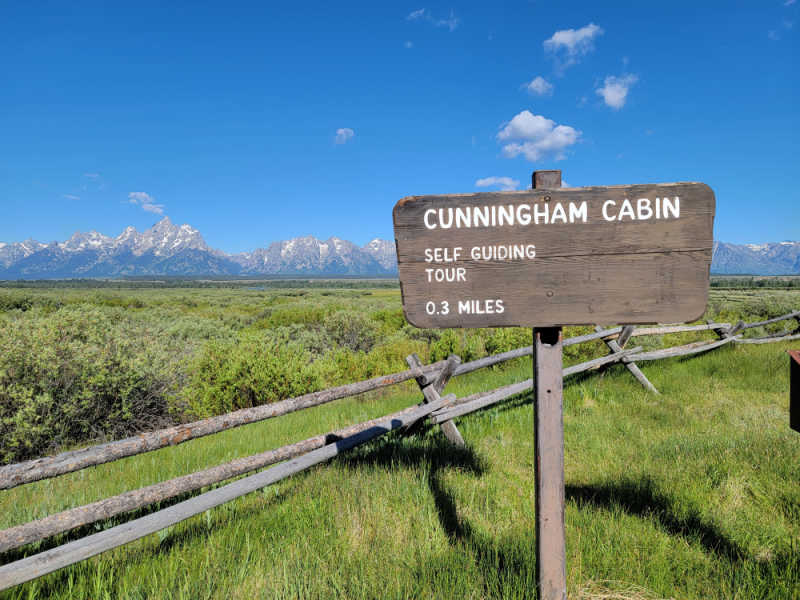 How to get to Cunningham Cabin

The Cunningham Cabin is located north on Highway 191 near the eastern boundary of the park.

Parking - There is a nice size parking lot right next to the trailhead. The cabin is only a tenth of a mile from the parking lot.

It is a short walk from the parking lot to explore this historic area of Grand Teton NP. There is a dirt trail with a few steps to reach the main area.

While exploring the grass area around the cabin, keep an eye out for holes in the ground. There are ground squirrels all over the place, and their holes are common.

Keep an eye out for bison in the area. This area is incredibly popular for single bison and large herds of them. 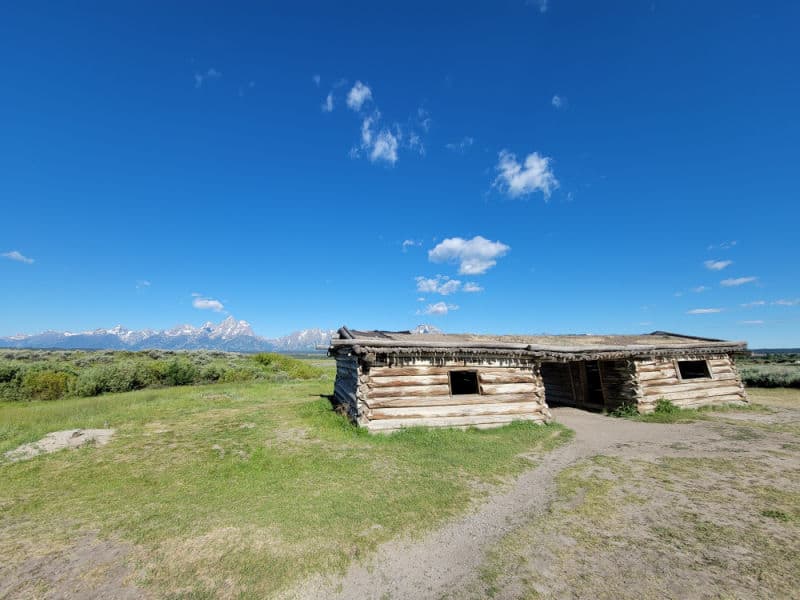 You will not be able to see the cabin from the highway. Once you reach the parking lot you will see the Cunningham Ranch sign and the cabin nearby.

There are times when wildfire smoke blows into the valley and covers the mountains from view. We had this happen during a visit and could not see the Teton Mountain Range even when close by.

You can buy a brochure with more information on the cabin for $1 cash near the trailhead. The brochure is produced by the Grand Teton Association.

There are no bathrooms.

John Pierce Cunningham first arrived in Jackson Hole around 1885 from New York. He was twenty years old when he arrived.

Between 1888 and 1890 Mr. Cunningham and his new bridge Margaret staked a homestead claim in the current location of the cabin.

Their original ranch was 160 acres which was the allowed acreage for the Homestead Act of 1862. The Homestead Act required homesteaders to live on the land for five years and to meet specific requirements.

These included building a cabin at least twelve feet by twelve feet and cultivate a few acres of crops.

Once they could prove their claim and they met the requirements the land was theirs.

The Cunninghams had to learn to adapt to ranching in the Teton Valley. Congress passed the Desert Land Act in 8177 which allowed rancher to increase their ranches past the 160 acres that were allowed in the Homestead Act.

Ranchers could purchase additional acreage for $1.25 per acre. Mr. Cunningham file a Desert Land Entry for an additional 140 acres in 1897. The land was for grazing and cultivating hay.

He purchased 240 acres from James and Lydia Uhl's property in 1918. The hay allowed ranchers to survive the long bitterly cold winter that includes deep snow. The hay had to last the 6 months of winter.

In April of 1893, there was an incident at the Bar Flying U Ranch that is still a mystery. During the fall of 1892, two wranglers from Montana approached Mr Cunningham looking to buy hay for their horses.

George Spencer and Mike Burnett struck a deal with Mr. Cunningham to winter over on the ranch. During that winter there were rumors swirling that the two men were horse thieves.

In the spring a man who claimed to be a US Marshall came to Jackson Hole accompanied by three deputies. They convinced a few men from Jackso to form a posse to apprehend the alleged thieves.

The posse surrounded the cabin ranch at night and waited for morning. In the morning when the two men left the cabin they were gunned down.

The truth of the Marshall's identity and allegations were never proven.

Staring in the 1900s, Mr. Cunningham started profiting from calf prices. He was able to invest in his ranch with the extra profit which allowed him to purchase the additional property from the Uhls in 1918.

Unfortunately, in the summer of 1918 was one of extreme drought which caused hay crops to shrivel up. The end of World War I also caused the calf prices to plunge.

This drought continued through the 1920s which made ranch foreclosures a common event. After the plunge of cattle prices and the drought, there was a movement to include the Teton Range and Jackson Hole valley in Yellowstone National Park which had been created in 1872.

Horace M. Albright who was the superintendent of Yellowstone in 1923 met with local residents and ranchers to develop a plan to protect the valley and mountains.

Mr. Cunningham along with another rancher Si Ferrin co-authored a petition. The petition was signed by 97 ranchers and outlined a proposal for the federal government or a private entity to buy out the ranchers.

The petition proposed that the entire Jackson Hole should be set aside to be a recreational area for the education and enjoyment of the nation.

This idea was brought to John D. Rockefeller Jr and his family who was touring through Jackson Hole. Mr. Rockefeller Jr was enthusiastic about a national park in the Teton Range. He created the Snake River Land Company in 1927 and began purchasing private land at a fair market price.

Grand Teton National Park was created in 1929 but only included the mountain range and Piedmont Lakes at the time of creation.

Over time Mr. Rockefeller purchased 32,000 acres and later donated the land to the federal government to become part of Jackson Hole National Monument. Ultimately the land was included in today's Grand Teton NP.

In 1928, the Cunninghams sold their Flying Bar U Ranch to the Snake River Land Company and retired to Victor, Idaho.

Today the Cunningham Cabin represents the spirit of homesteading ranchers that helped shape the character of Jackson Hole. 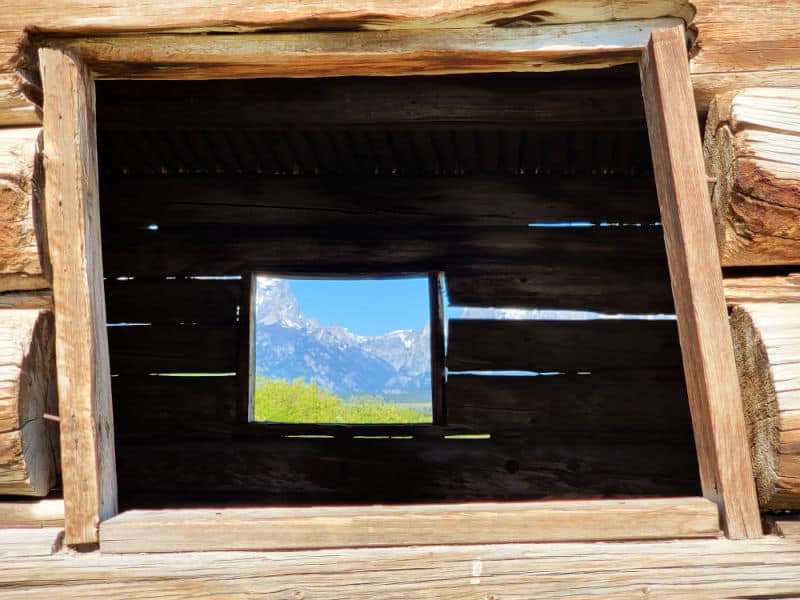 Don't Miss these great sites in the park! 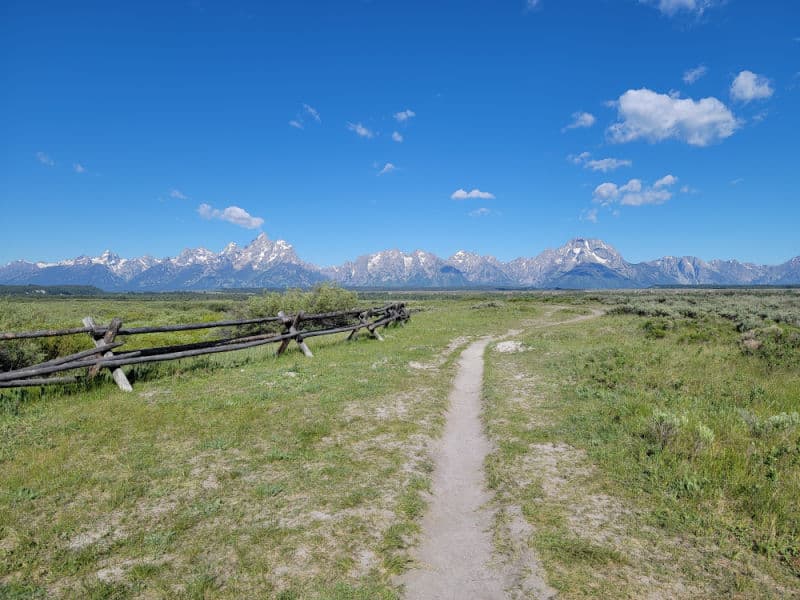 Top things to do in Grand Teton