eton Under the shadow of one of the most picturesque mountain ranges in the world, Grand Teton National Park is both a tourist destination and a sanctuary for thousands of species. Located south of Yellowstone National Park in the northwest corner of Wyoming, the park draws over four million visitors each summer with its serenity and unmatched views. Visitors can enjoy scenic river float trips, fantastic fly fishing on the Snake River, hiking and backpacking throughout the park's vast trail system, mountain climbing in the challenging Teton Range, fishing and sightseeing excursions on Jackson Lake, horseback riding...and more!

To anyone who loves mountains, one name keeps coming to mind: the Tetons. The grand Tetons. For grand they are. While they are higher peaks elsewhere in the Rockies, none quite match the rugged majesty, the raw, wild beauty of this range. Bold, jagged spires of rock, the Tetons reach high into the Wyoming sky as if to snag the passing clouds.

The peaks are all the grander for their setting. To the east of the mountains lies Jackson Hole (fur trappers of the last century referred to mountain-rimmed valleys as "holes"). From this basin the Tetons rise abruptly, with no intervening foothills, to neck-craning heights, a solid mountain rampart towering some 7,000 feet above the valley floor. And then there are the lakes, Jackson Lake, Jenny Lake, and more. The mirrored images of the peaks in their waters seem to double the height of the mountain wall.

Winding through this lovely valley, like a silver thread of continuity, is the Snake River. A profusion of wildlife flourishes all along its course and throughout the park. Ospreys nest in the weathered skeletons of dead trees by the riverside, as do bald eagles. Otters play on the riverbanks or glide gracefully through the water. Along tributary streams, the small ponds created by beavers are favorite feeding spots for moose. The great beasts are often seen standing flank-deep, sometimes even neck deep, in the ponds, munching on aquatic plants. The park's lodgepole pine forests are home to elk and mule deer, while the sagebrush flats of Jackson Hole are preferred by pronghorns. Black bears wander through the valley forests and on the lower mountain flanks, and grizzly bears are sometimes sighted in the northern reaches of the park. Coyotes, mountain lions, lynx, martens, bobcats, badgers, and a host of smaller animals also find refuge in this rugged wilderness. And above it all, always there, looming over the scene, sensed even when hidden within a shroud of clouds, are the Tetons, the newest of the many ranges that make up the Rocky Mountains. Less than 10 million years old, geologically the Tetons are mere babes; the rest of the Rockies average 60 million years in age. 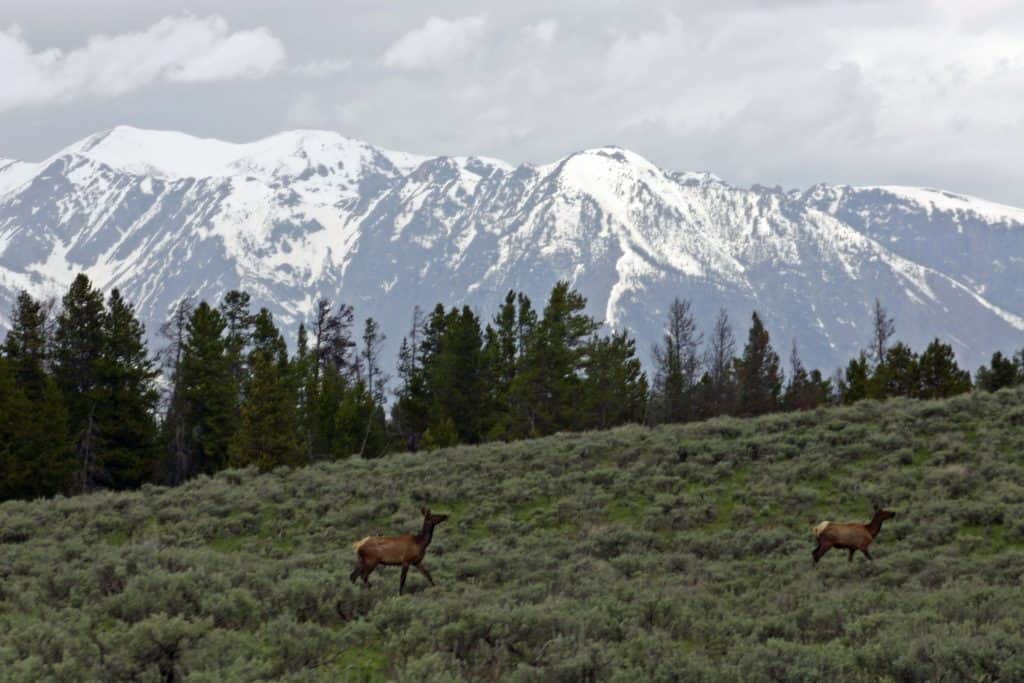 But the park provides more than just another resort getaway. A wide range of hiking trails offer challenges ranging from short hikes to waterfalls to multi-day excursions which will require a well-stocked backpack. Personal favorites include the loop, beginning at Jenny Lake, through Cascade and Paintbrush Canyons en route to Lake Solitude. Another beautiful hike in the region begins at Phelps Lake, just north into the park from Teton Village, and takes visitors back to Static Peak. Both hikes involve great elevation gains but little requirement of technical skill. Smaller hikes include the short afternoon hike from Jenny Lake to Hidden Falls (this is the trail which continues up Cascade Canyon) and various hikes north of Jackson Lake Lodge.

For the traveler that doesn't necessarily wish to strain themselves on vacation, there are ample opportunities to experience a view of the mountains without having to gasp for breath on an arduous climb. A road leads to the summit of Signal Mountain from which there is a 360-degree view of the entirety of the valley. Both the Teton and Gros Ventre ranges are visible from this vantage point, as well as Snow King Mountain hovering over the town of Jackson thirty miles south. Guided horseback trips can be organized through any of the aforementioned resorts which follow many of the same trails offered for hiking.

Wildlife is in abundance throughout the park - after all, it is a nature preserve! In the swampy lowlands surrounding Jackson Lake and the other smaller bodies of water, moose feast on tender willow shoots. Black and grizzly bears have been known to frequent the area, and herds of bison (as many as two-hundred heads) roam the Antelope Flats plateau high above the Snake River. Pronghorn antelope and elk bound along and throughout the park borders and beyond. Be advised, however, that these are wild animals and should be viewed from afar. Binoculars are a must-have on your trip to Grand Teton National Park, both to better view these wild creatures in their native habitat and to ensure that you make it back home safely with the memories.

Before the park was created in 1949, homesteaders had traveled to the area for the past century in hopes of staking a claim to some of the unspoiled beauty. The remnants of these settlers can be seen at the preserved buildings including Cunningham Cabin, Mormon Row, the Chapel of the Transfiguration and Menor's Ferry. Several ranches remain in operation to provide a personal experience in Western Americana, such as Triangle X Ranch. On these ranches, one can better understand the hardships of staking a life on the beautiful but unforgiving soils of Grand Teton National Park.

So, whether planning a trip to Grand Teton National Park to coincide with the blooming of the mountain lupine and Indian paintbrush in the spring, or the changing colors of the aspen leaves in the fall, there will always be plenty to satisfy everyone's desires.

Grand Teton is one of the most visited National Park sites in the US!