Nobody who’s ever ascended the staircase to the upper lobby of Jackson Lake Lodge will ever forget the view of the Grand Tetons through the 60-foot windows that greet them.

The rooms are spread over the property including the Moose Pond Rooms which are housed in a 2-story building a five-minute walk from the main lodge. The walk through pine trees offers amazing views of the Teton range. 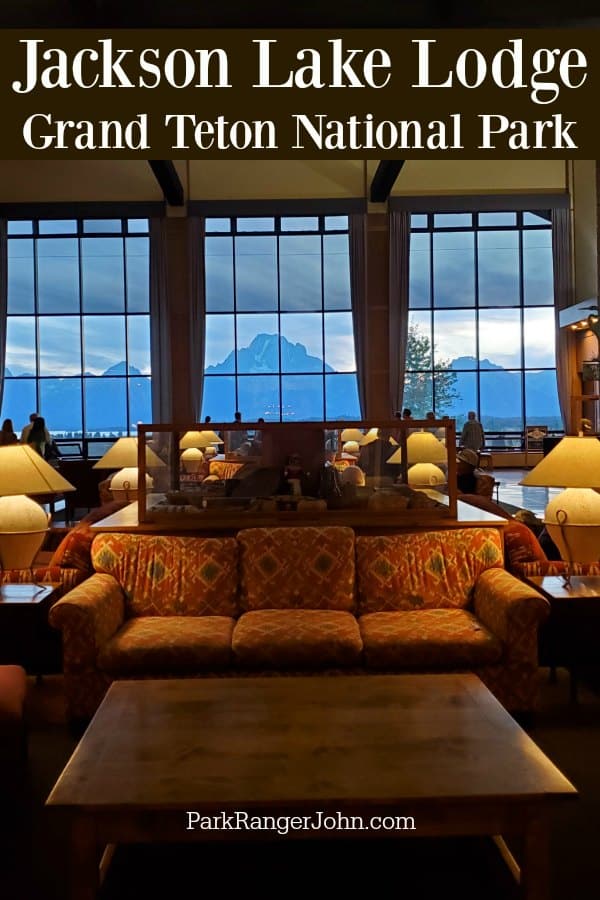 Operated by the Grand Teton Lodge Company (GTLC), Jackson Lake Lodge sits on a bluff on the East side of Jackson Lake with perhaps the single best vantage point of the unforgettable Teton Range in the whole Jackson Hole valley.

GTLC also operates two other National Park System approved concessions in Grand Teton National Park. Jenny Lake Lodge, about 10 miles to the south is the company’s high-end yet rustic offering nestled at the foot of the mountains, while Colter Bay Village, 5 miles to the north is its family-oriented, budget-friendly stopover. Jackson Lake Lodge fills in the gap between the extremes.

Opened in 1955, Jackson Lake Lodge has hosted numerous notables through the years, including Presidents Kennedy, Nixon, Reagan and Clinton, as well as Lady Bird Johnson.

It can also claim some historical political significance, as it played host to the 1989 U.S. / Soviet talks between Secretary of State James Baker and Soviet Foreign Minister Eduard Shevardnadze. An agreement signed between the two at the lodge meetings ultimately contributed to the end of the Cold War.

In 2003, Jackson Lake Lodge was listed as a National Historic Landmark. Although it is architecturally unremarkable, it is considered a prime example of the “International Style,” not uncommon in mid-century park structures.

The lodge blends well with its surroundings, and it is the placement of the structure, said to have been personally chosen by John D. Rockefeller himself, that makes it special. Rockefeller and his contributions of land, time and dedication were largely responsible for Grand Teton National Park’s existence.

The lodge was also featured on the PBS series Great Lodges of the National Parks in July of 2008. Author, journalist and architectural historian Christine Barnes, who chose Jackson Lake Lodge for the series, call these park lodges “solid functioning examples of American history: museums with beds, restaurants, and places to look at and reflect on the grandeur of it all.”

Jackson Lake Lodge features 385 guest rooms. Rooms with mountain views are in the $300 range, without views about $200, reasonable for the prime season in Grand Teton country. There are also guest cottage rooms on either side of the lodge for similar rates.

Two restaurants, the Mural Room and the Pioneer Grill, offer a wide variety of cuisine, and the Blue Heron Cocktail Lounge has live entertainment most nights during the summer season. The lodge also has several stores, both gift, and apparel, and operates numerous activities, from tours to horseback riding, river floats to swimming.

Located about 20 miles south of Yellowstone National Park and 30 miles north of the town of Jackson, Jackson Lake Lodge is centrally located to everything in the Jackson Hole Valley.

John D Rockefeller would often hike to the top of a small knoll and enjoy his lunch while gazing out at the Teton Range. These lunches influenced Mr. Rockefeller Jr. when he decided to build Jackson Lake Lodge in this area.

Construction of the lodge was done in 1955. The lodge was designed by architect Gilbert Stanley Underwood and is often referred to as the “Grand Experiment”.

The lodge was opened with the mission and goal of preserving and protecting the timeless view of the Grand Tetons for future generations.

Here, in this incomparable area, millions of visitors will find some measure of the peace and solitude which they require.” John D. Rockefeller Jr.

We stayed in a 1 king bed cottage with a patio and it was fantastic. We were not sure what to expect but were so impressed with our cottage. There was a ton of room to stretch out and really relax in the room.

The room has a Keurig with coffee pods and tea bags, a sink, full bathroom, dresser, 2 chairs, and a table and closet space. There is a fan in the closet if the room gets warm. We left the windows open at night and it was cool in the morning. 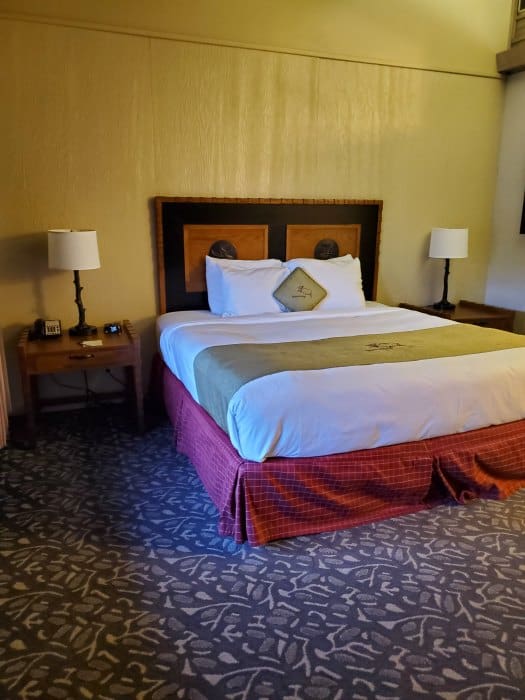 The bed was really comfortable! Soft but comfortable enough for a great night's sleep. We could hear people heading to their rooms since we had the windows open but it was quiet the rest of the night.

We would definitely stay in a cottage room again. The room had everything we needed for the night. 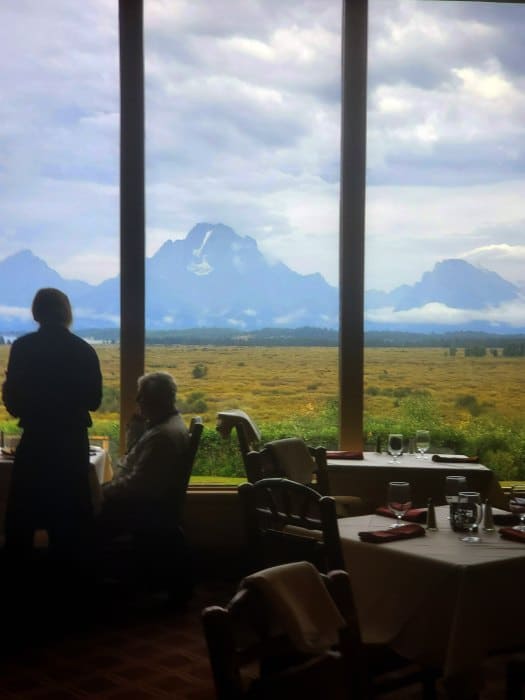 The Mural Dining Room is the fine dining restaurant in the lodge. It is open for Breakfast, Lunch, and Dinner with reservations being recommended for dinner. 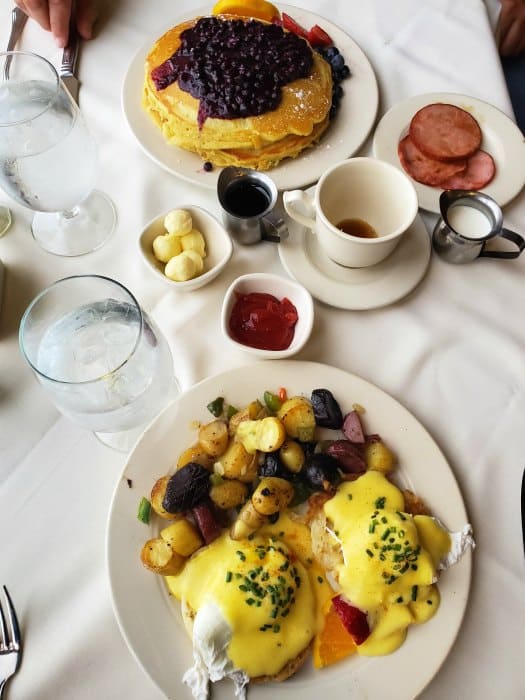 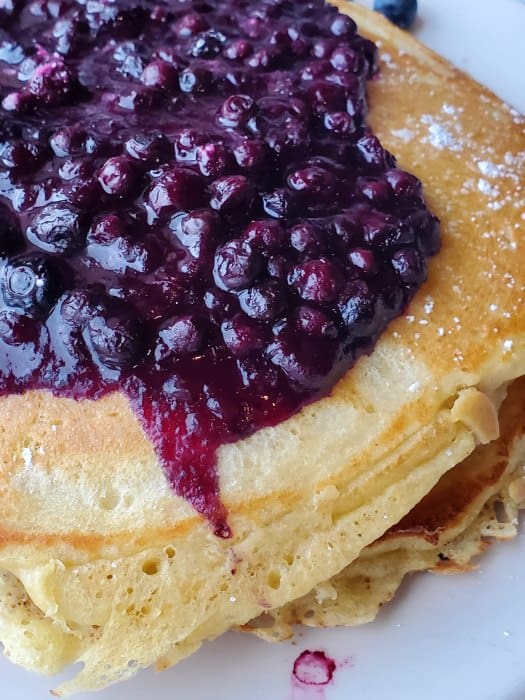 Don't miss the huckleberry pancakes during breakfast! They are beyond delicious and they have such an amazing heap of huckleberries on top of them.

The eggs benedict was also quite delicious. 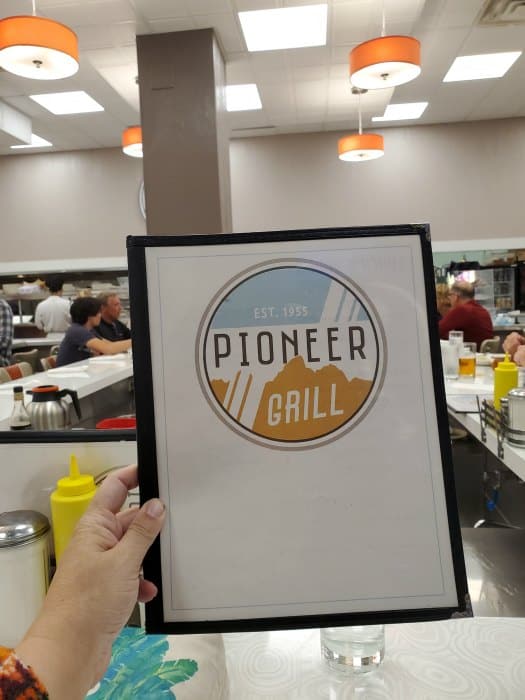 The Pioneer Grill is a 50’s themed diner that offers counter service for breakfast, lunch, and dinner. The counter winds around like a snake through the restaurant with diner stools set around it. We found the restaurant to be amazing.

The food tasted amazing and was really fast. Our server was super cheerful and so fun to talk with. We would definitely eat at this restaurant again. 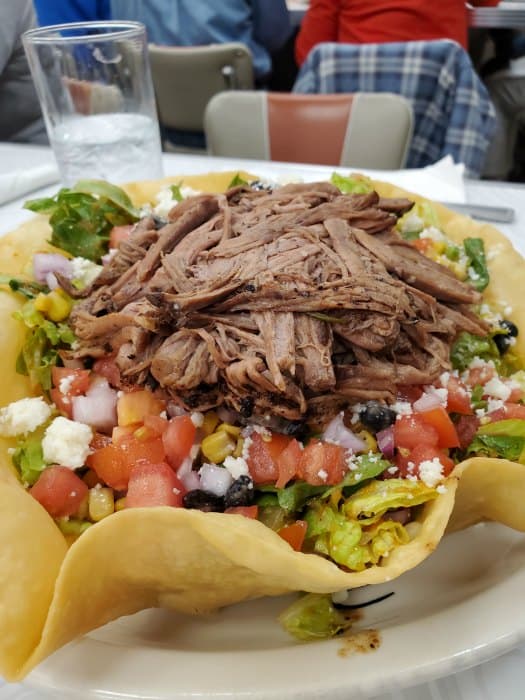 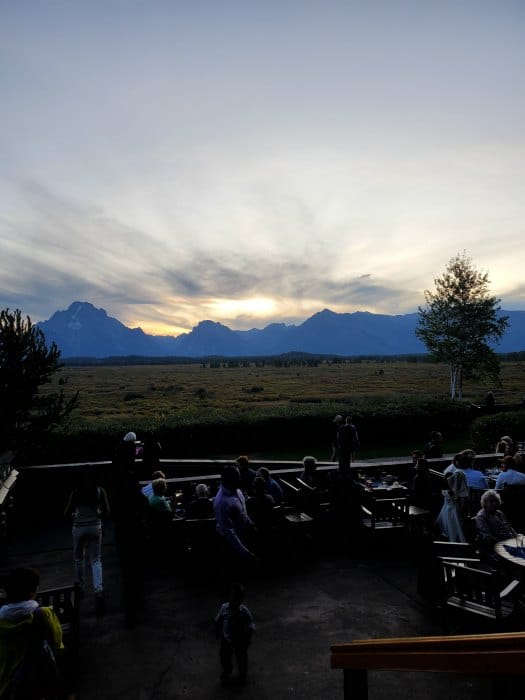 This is the place to go for outdoor seating with a view of the Tetons. You can dine outside on the deck while enjoying locally brewed organic beer, huckleberry margaritas, and delicious food.

During the summer from late June through late August, you can enjoy a pool barbecue under the Wyoming sky. The barbecue features all you can eat Western BBQ and live music in a relaxed setting. Kids are free to play outdoors and enjoy the moment. 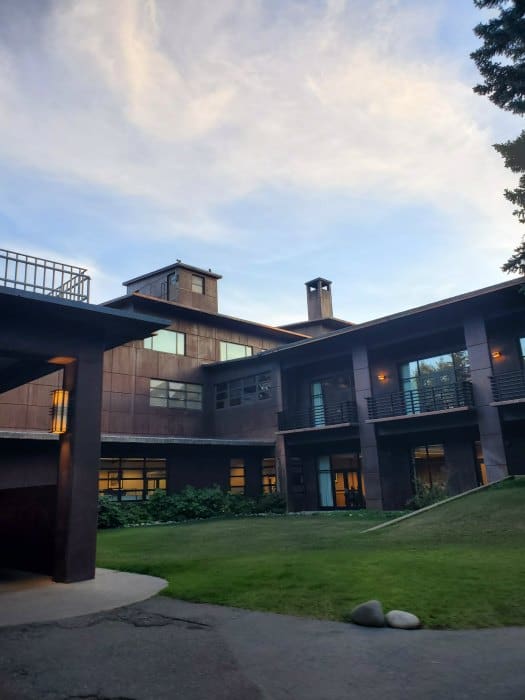 Wifi – Free Wifi is available in the lodge and cottages. It is pretty strong and connected easily. It does get bogged down and slow down during busy times.

Pets – Pet-friendly rooms are available. Pets must be on a leash 6 feet or less.

Smoking – All facilities within Jackson Lake Lodge are non-smoking

Hotel Gym – The hotel gym is the outdoor setting surrounding the hotel. The activities desk has a list of hiking or walking trails for guests to enjoy.

Medical Clinic – There is a medical clinic located near the Jackson Lake Lodge Service Station. They are open from 9 am to 5 pm

Things to do in Grand Teton - The must-visit sites within the park.

Yellowstone National Park Camping - Our guide to every campground within Yellowstone, site photos, how to make reservations, and more.