Epic Guide to Kaloko Honokohau National Historical Park on the Big Island of Hawaii including things to do, history, epic sunsets, and so much more. 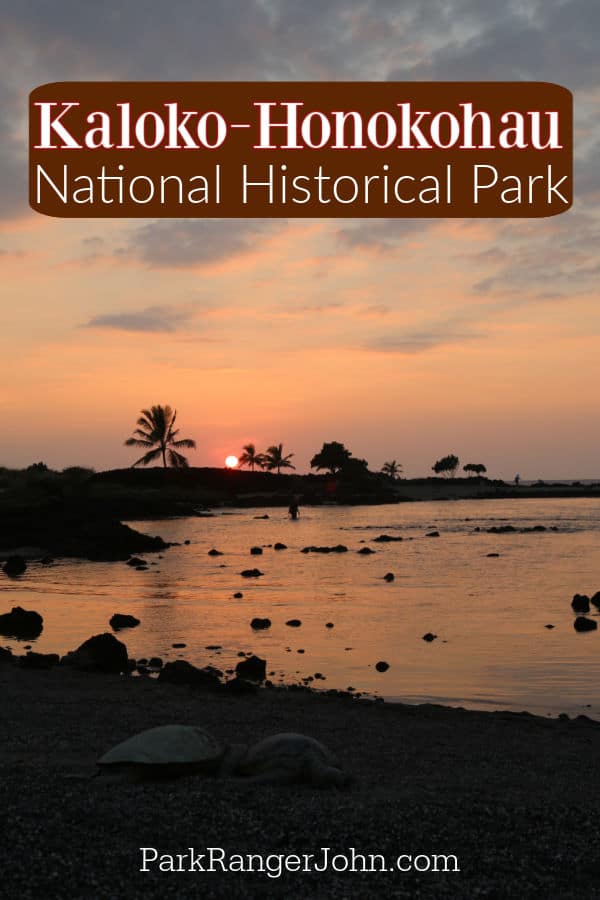 Kaloko Honokōhau NHP is one of the hidden gems of Hawaii.

This is truly one of our favorite parks in the US National Park system. It is absolutely amazing.

Established in 1978,  Kaloko Honokohau was created to preserve the coastal sections of two ahupua‘a (traditional land divisions), Kaloko and Honokōhau.

You can hike out and see the largest fish pond wall in Hawai'i which was recently completed in the park. The rock wall is over 800ft in length and 40ft wide and shows how native Hawaiians (kanaka maoli) used fish ponds to survive in this hot arid environment.

The wetland of the Aimakapa Fishpond is an amazing place to look for birds. Early morning is a great time for birdwatching and it gets you out before it gets really hot especially hiking on the black lava.

Migrating birds stop at the wetlands during the winter. Keep an eye out for endangered Hawaiian stilts and coots in the Kaloko Fishpond. 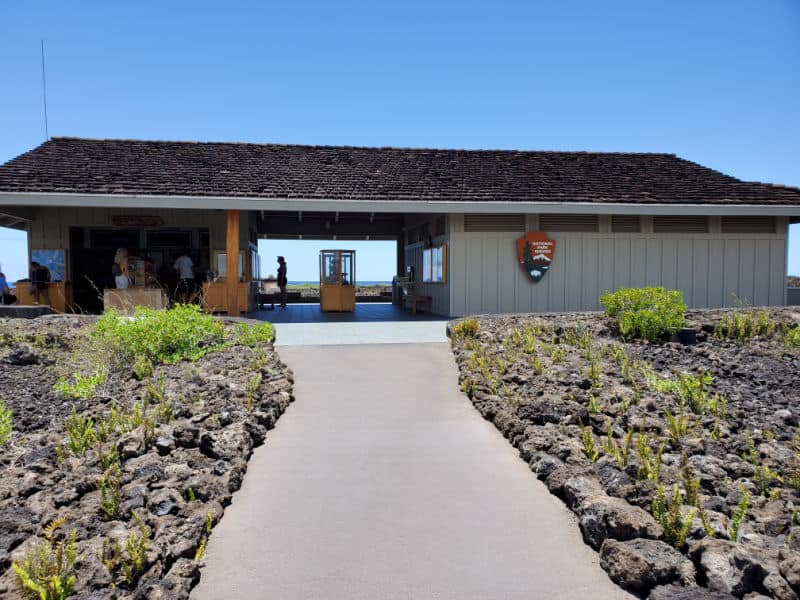 Is Kaloko-Honokōhau National NHP worth visiting?

Kaloko Honokohau is one of my favorite parks in the National Park system! It is extremely easy to access and is located just north of Kona on the Big Island of Hawaii.

You can visit the park's visitor center, go for a hike, go wildlife viewing, and explore the beach.

There have been several times that I have found myself to be one of two people on the entire beach looking out into the Pacific Ocean.

Me and my wife, Tammilee,  have found ourselves realizing that we have an entire piece of paradise all too ourselves!

It is also one of the best sunsets you will ever find. Imagine sitting on the beach watching sea turtles sleep in the sand while watching the sunset over the Pacific Ocean with palm trees in the background...truly paradise! 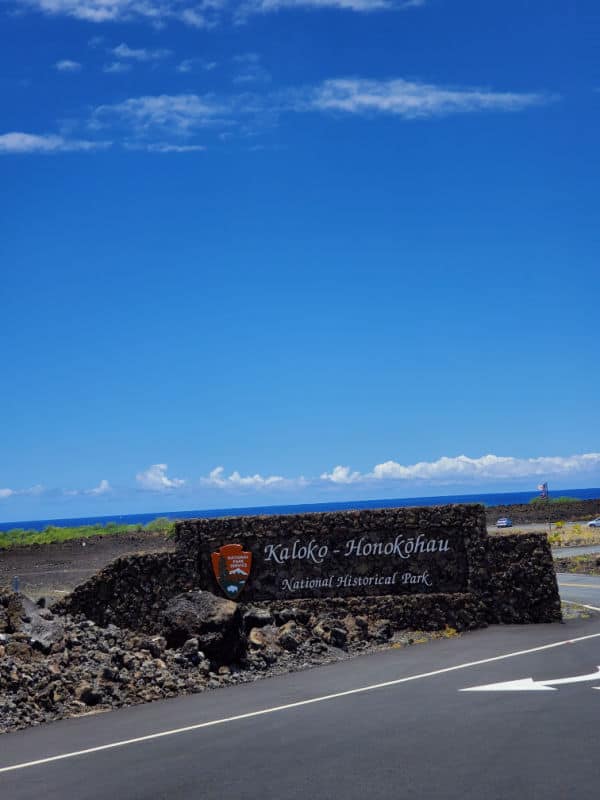 Kaloko Honokohau National Historical Park is located in the Kona district on the big island of Hawaii.  It located on the western coast of the island.

The “Big Island” of Hawaii, as it is called, is said to be named as such after the Polynesian explorer who discovered it, Hawai’iloa.

Another theory is that the name stemmed from the native word Hawaiki, which is the place where Polynesian people are said to have originated, the place they go in the afterlife, and the place of their gods and goddesses.

In the late 1700s, Captain James Cook was the first European explorer to visit Hawaii.  He nicknamed the collective Hawaiian Islands “Sandwich Islands” after his expedition patron, the Earl of Sandwich.

Cook was killed on the big island in 1779 after a scuffle involving a boat theft.

The Big Island was home to Pai’ea Kamehameha, or The Great Kamehameha, who ruled the islands.

While serving as ruler, and after several years of battles, Kamehameha united the islands together in 1795.

The native Hawaiians settled this rough, jagged, area along the sea as they believed it was a highly spiritual place.  They believed that every part of the land and sea in the area evoked a spiritual presence.

The word Kaloko means “pond” and the word Honokohau means “the bay where waters congregate” in Hawaiian.

These two names designated for this Hawaiian Historical Park are the names of two of the four different ahupua’a in the area.

The Hawaiian term ahupua’a refers to a large subdivision of land that usually extends from the mountains to the sea and includes one or more watershed.

Throughout history, each of these areas of land had their own complex socioeconomic system.  Each ahupua’a met some need of the greater population in the area.  Each had a specific resource they could offer.

A vital resource for generations of natives in this area was fish harvested from the sea and also from fishponds they constructed themselves.

It is believed some of these fishponds were used for more than 600 years.  They also grew coconut trees and harvested sweet potatoes as well as raised livestock such as chicken and pigs.

To ensure a thriving spirit in each ahupua’a, those closest to the sea supplied fish, and those more inland grew crops and raised the livestock.

Others would also supply items such as the taro plant and wood.  The different groups would then trade with each other what was needed.

Archeologists have long studied the area of this park for its rich history and tight knit community spirit of the natives, surveying over 200 different sites.

Archeologists have found evidence of home and religious sites, stone altars and shrines, lava tube shelters in the event of an eruption from the island’s several volcanoes, as well as petroglyphs.

The petroglyphs scattered among the area tell a deeper story into the sense of community and life among the ahupua’as.

The Kaloko Fishpond is an impressive example of the ingenuity and use of the resources that are provided.

The natives first built a lava rock wall in order to separate the bay from the sea.  They used special gates, called makaha to control the amount of water that reached the pond and put in place angled walls that controlled the force of massive sea waves.

The lava rocks were porous which also helped control the amount of seawater.

The Kaloko Fishpond seawall was approximately 30 feet wide, 6 feet tall and stretched for 250 yards.  In the 1950s the wall was destroyed by storms.

Since that time, the National Park Service has worked with native elders and referenced archeological information to try and reconstruct the wall to the way the natives had built it years ago.

What is visible today is parts of the stonewall as well as the ancient ‘Ai’opio Fishtrap.  The walls for this fishtrap were constructed in a way which made it easy for the fish to swim over during high tide.

During low, tide, the fish were then trapped in a specific area and then stored in underwater sections until needed. 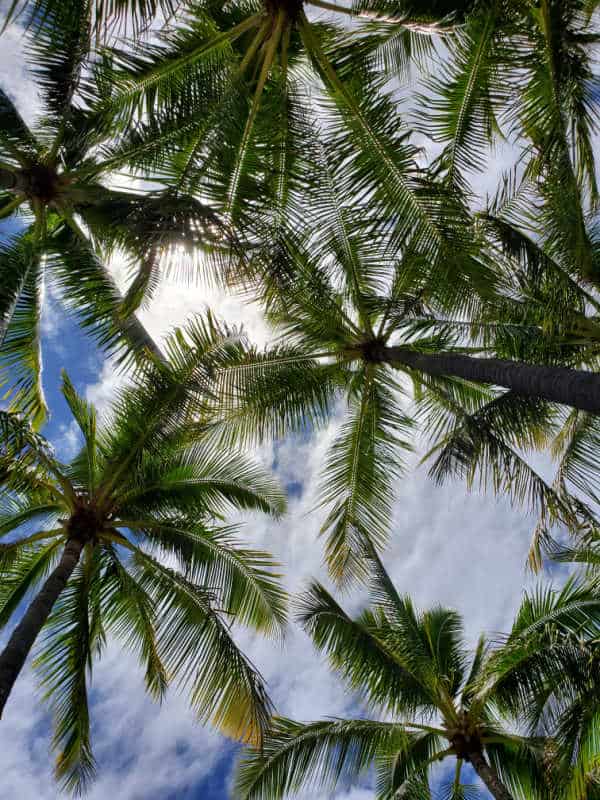 Pets are allowed but must be on a leash at all times.

Cell service really depends on where you are in the park. The visitor center, Kaloko Fishponds, and Ai'opio fish trap normally have good cell service.

The Kaloko Road Gate is open from 8:00 am-5:00 pm daily. An entrance, which leads to the south end of the park, is reached by following Kealakehe Parkway to the Honokohau Harbor, taking the first right turn and then following the road to the Kona Sailing Club. From here it is a short walk to the beach area.

Visitors are welcome in the park after 4:00 PM, but vehicles must be removed from Hale Ho'okipa Visitor Center parking area.

There is no Public Wifi available in the park.

There is a great parking area near the visitor center.

There are at least 23 public charging ports in Kailua-Kona 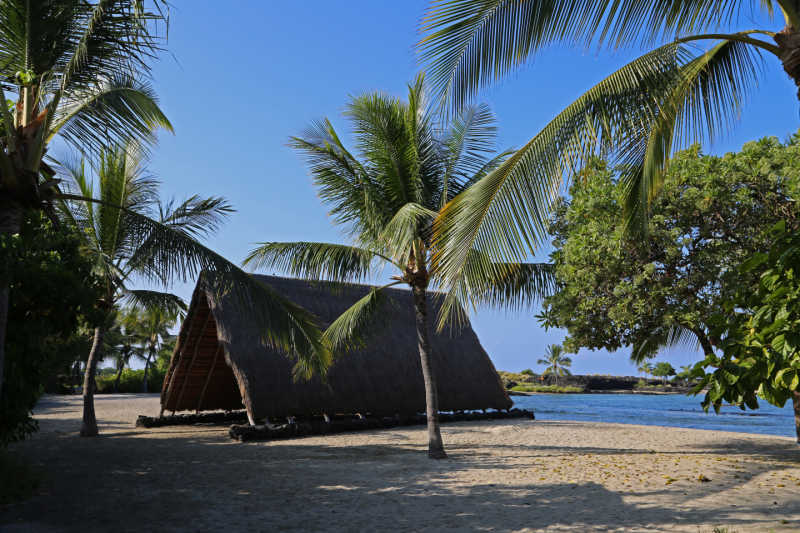 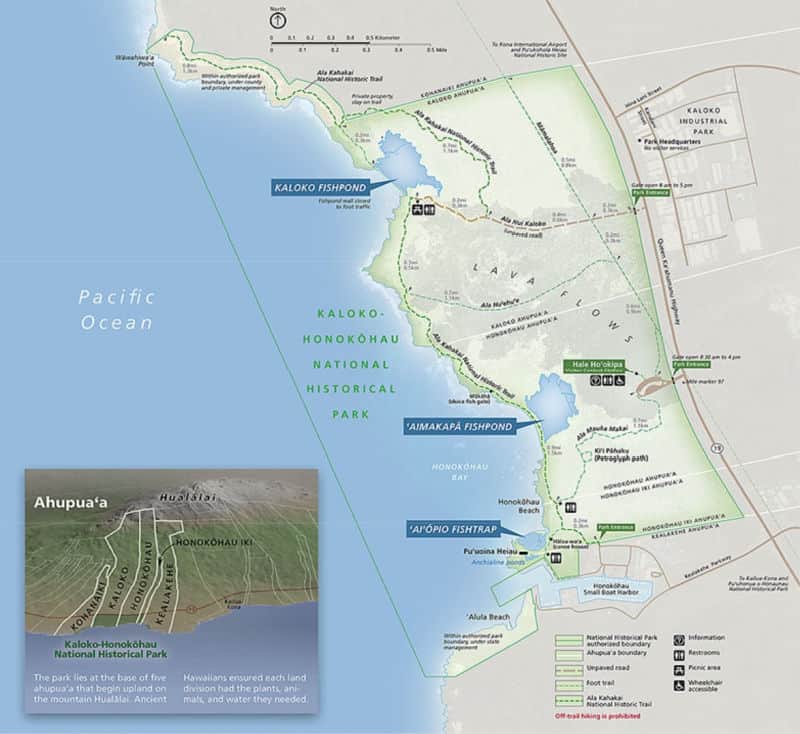 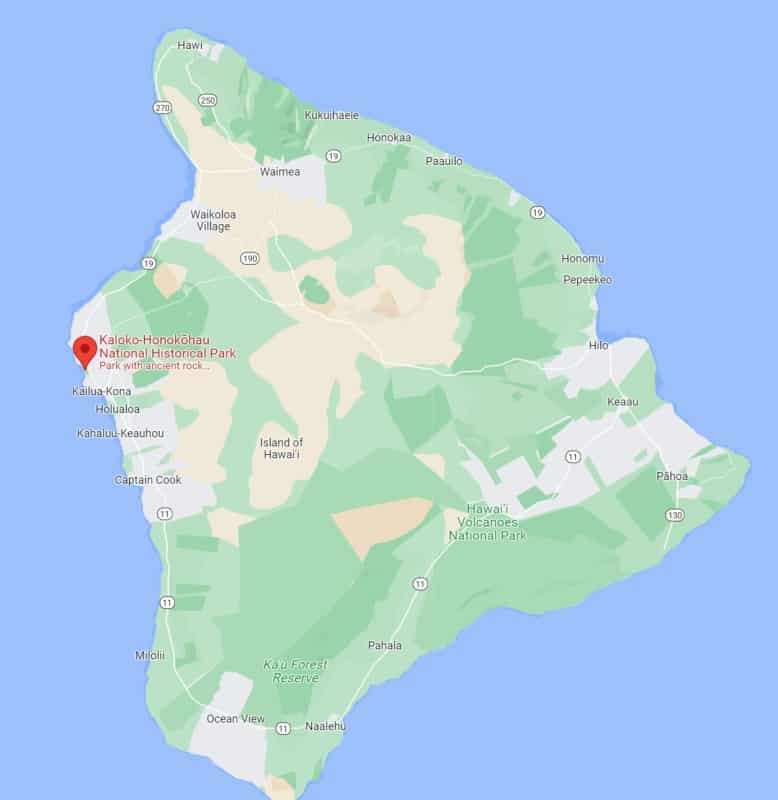 Where is Kaloko-Honokōhau National Historical Park?

Kaloko Honokohau NHP is located near Kailua Kona on the Big Island of Hawaii.

Estimated Distance from nearby National Parks

Haleakala National Park is located on the island of Maui.

The visitor center is located off of Queen Ka'ahumanu Highway, south of 97 mile marker 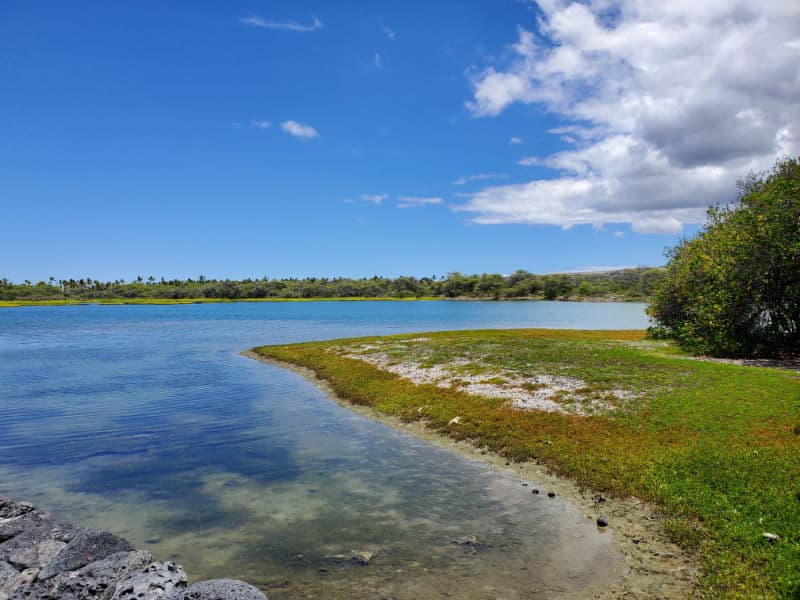 Getting to Kaloko-Honokōhau National Historical Park

The visitor center, Hale Ho'okipa, is located half a mile north of the entrance to Honokōhau Harbor.

The Kaloko road gate is located across the highway from the Kaloko New Industrial Park (across from the big yellow "Kona Trade Center" building). 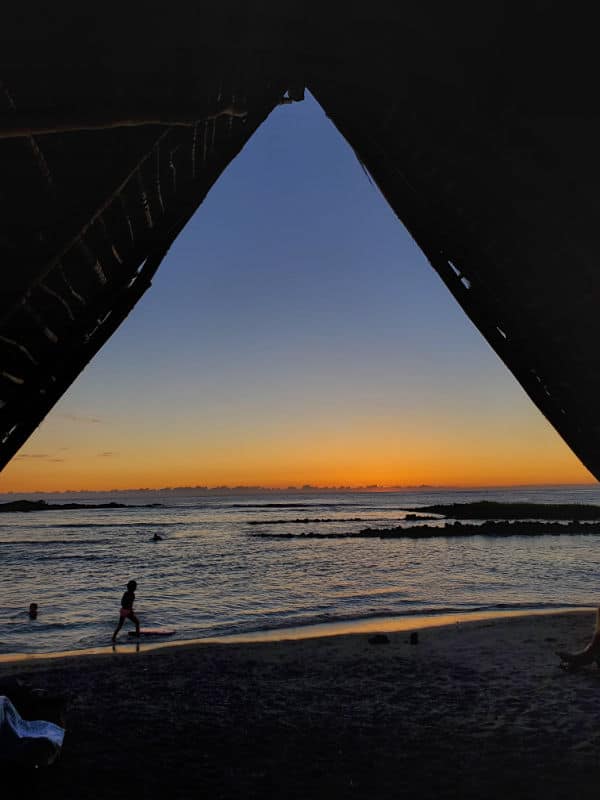 The best time to visit is anytime you can make it to the Big Island of Hawaii.

Kailua Kona experiences epic warm weather through out the year. There is very little temperature change throughout the year. 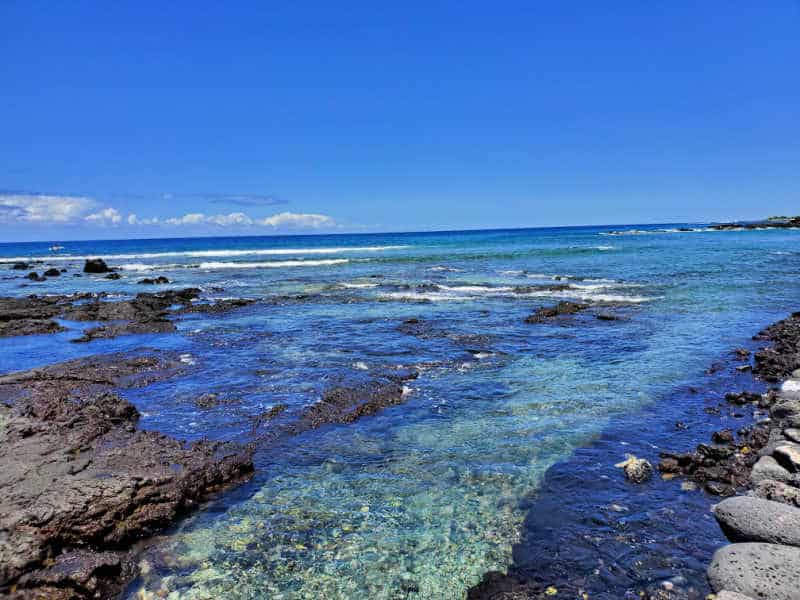 Best Things to do in Kaloko-Honokōhau National Historical Park

We suggest planning a few hours minimum in the park. One of our favorite things to do in the park is watch sunset.

We visit the fish ponds and main portions of the park during the day and then head to the harbor for epic sunset views.

Hale Ho'okipa, is located half a mile north of the entrance to Honokohau Harbor.

Hale Ho'okipa, the Park's Visitor Center has a bookstore/gift shop, interpretive information, a ranger on duty, and great views of the Pacific Ocean

This area is considered sacred and should be protected. Please do not climb on walls, pick plants, get too close to the turtles, or remove artifacts or rocks. This park is here to preserve the culture of the ancient Hawaiians.

You can pick up a Kaloko Honokohau NHP Junior Ranger program at the visitor center.

Are you a slightly older Jr. Ranger, but think you're smarter than a fourth-grader? Then the Kupuna Ranger Book might be for you!

There is epic bird watching at the Kaloko Fishpond including endangered Hawaiian Stilts.

The Aimakapa Fishpond is a great place to see migratory birds that winter in the park each year. 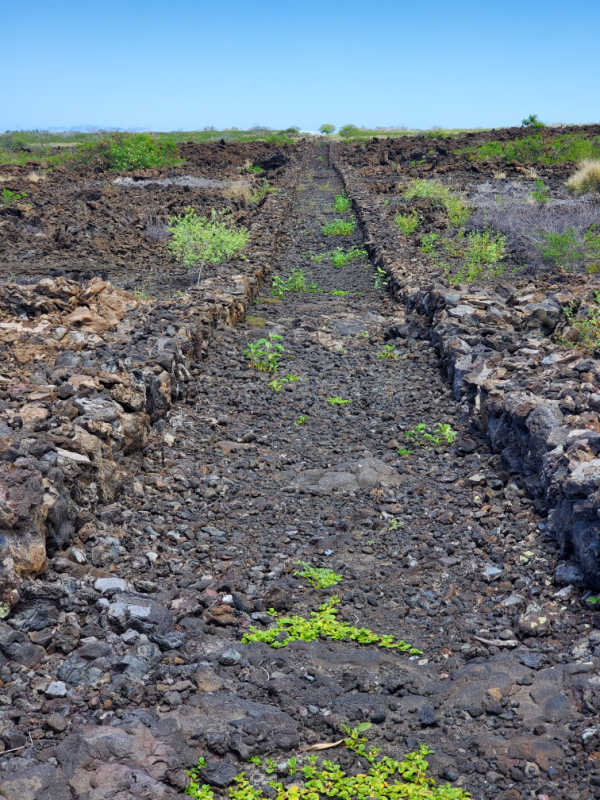 Within the park you can explore the Mamaloahoa Trail along with the Ala Kahakai National Historic Trail.

How to beat the crowds in Kaloko-Honokōhau National Historical Park?

We have visited the park many times and rarely seen a crowd. The best way to beat the crowds is to visit early in the day or stay for sunset. 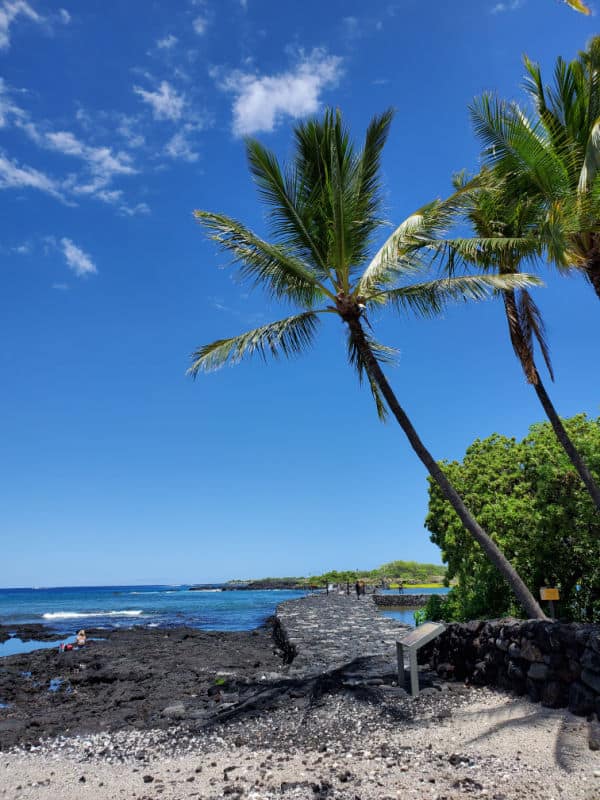 Where to stay when visiting Kaloko-Honokōhau National Historical Park

There is great lodging and vacation rentals available in Kailua-Kona and surrounding areas.

There are no National Park Campgrounds in the park. 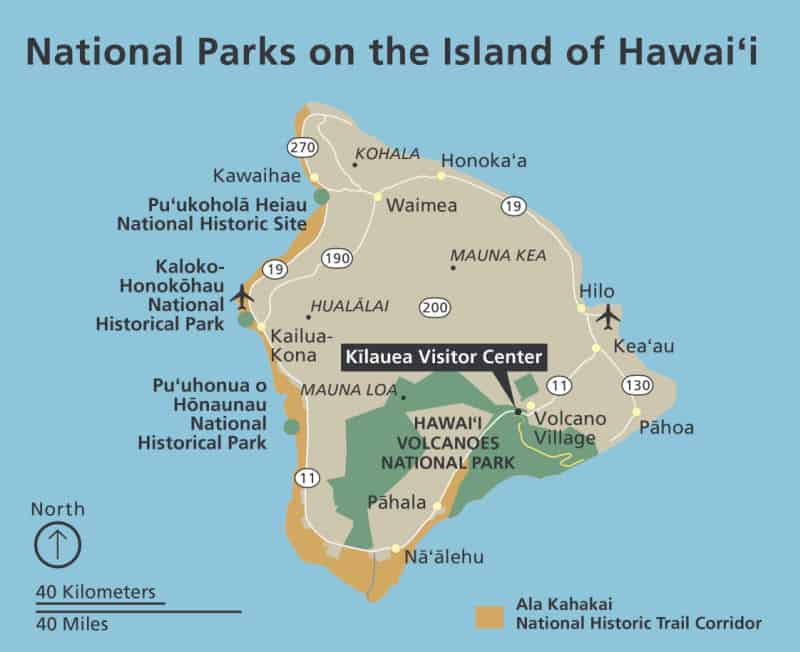