I may be a bit bias about Washington National Parks since we live in Washington but I do have to say we have some amazing National Parks in Washington State. There is just something special about Mount Rainier and how it looms over the state. Olympic National Park offers everything from coastal exploration to hot springs and rainforests to explore. North Cascades is a hikers paradise plus all of the historic sites to explore in our great state. 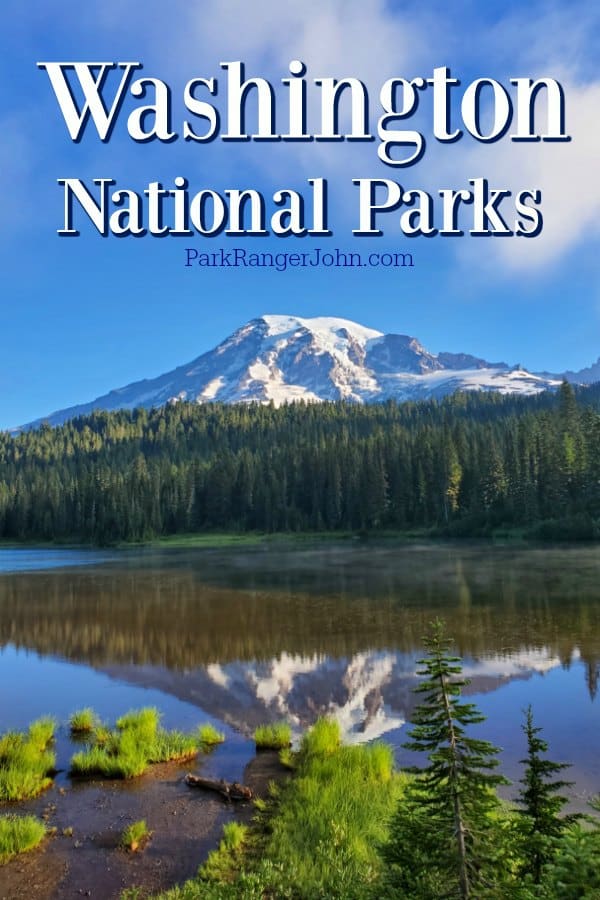 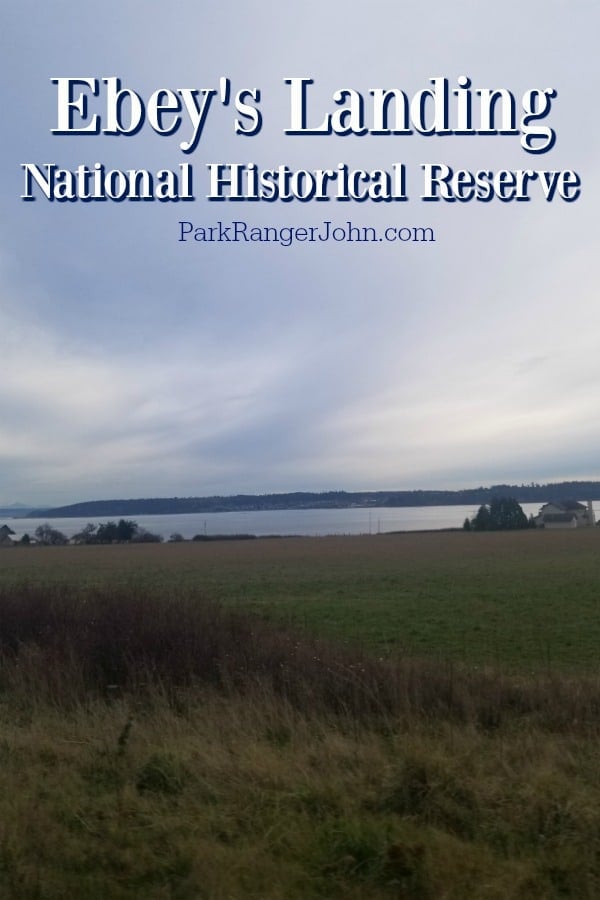 Ebey's Landing NHR is located in Northwestern Washington approximately 50 miles north of Seattle. The park protects over 17,500 acres of land and is open year-round.

The park was established in 1978 "to preserve and protect a rural community which provides an unbroken historic record from... 19th-century exploration and settlement in the Puget Sound to present time".

One interesting thing about this park is that very little of the park lands are actually federally owned. The land is still worked by farmers whose ancestors claimed the land under the 1850 land law. 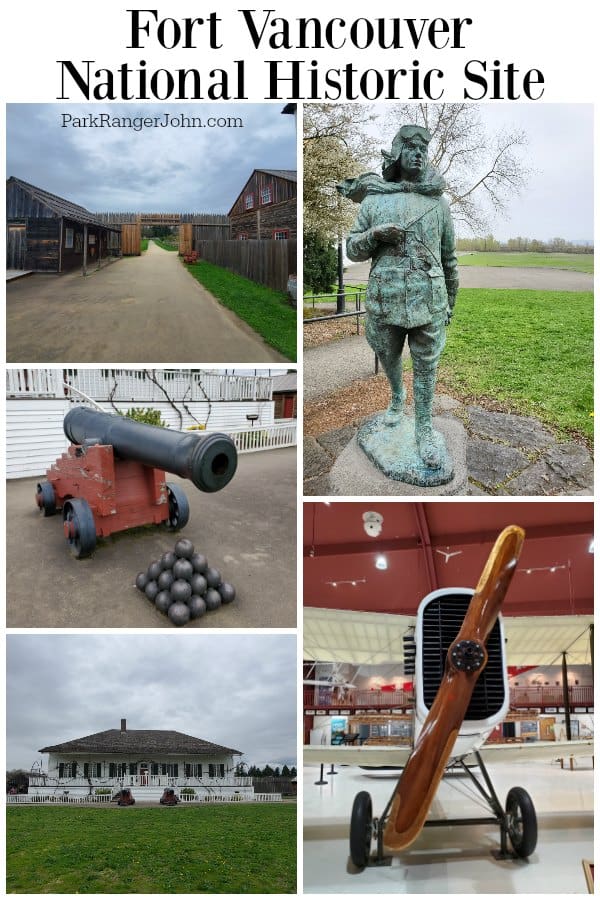 Fort Vancouver NHS is located in southwestern Washington just north of Portland, Oregon. The park is open year-round and offers visitors the opportunity to tour a recreated 19th-century trading post.

In 1825 the Hudson Bay Company built a headquarters and supply depot for its operations in the Pacific Northwest. This trade center had a significant influence on the cultural, political, and commercial developments in the Oregon Territory.

Fort Vancouver had the first hospital, library, school, sawmill, gristmill, and shipbuilding site. The fort also served as the terminus of the Oregon Trail for immigrants.

Klondike Gold Rush NHP has multiple locations including a location near downtown Seattle.

Seattle was advertised as the place to stop to get all of your supplies before heading north.

Visitors can learn more about this history and the gold rush at the visitor center.

Lake Roosevelt was created when the Grand Coulee Dam was created in 1941. The park includes many campgrounds, St. Paul's Mission, The Fort Spokane Visitor Centr, and 22 boat ramps around Lake Roosevelt.

The Manhattan Project NHP is located in Washington, New Mexico, and Tennessee. The park interprets and tells the history of the people, events, science, and engineering that led to the creation of the atomic bomb.

There is a park visitor center in Richland, Washington. Visitors can sign up online to take a tour of Hanford B-Reactor National Historic Landmark. The 4 hour tours are free but you do need to sign up ahead of time. 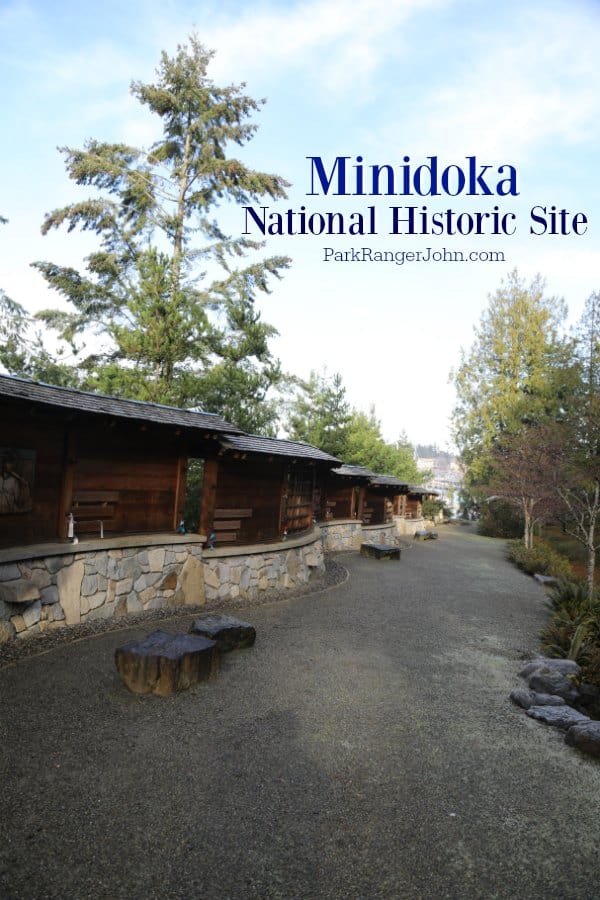 The Minidoka NHS is located in both Washington and Idaho. The Washington location is on Bainbridge Island.

When President Roosevelt signed Executive Order 9066 on December 7, 1941, it stated that the war department could create zones from which Japanese Americans could be excluded.

The first area that was designated was Bainbridge Island. Today there is a memorial dedicated to these events and the Japanese Americans who were ferried off the island before being sent to Manzanar and then on to Minidoka. 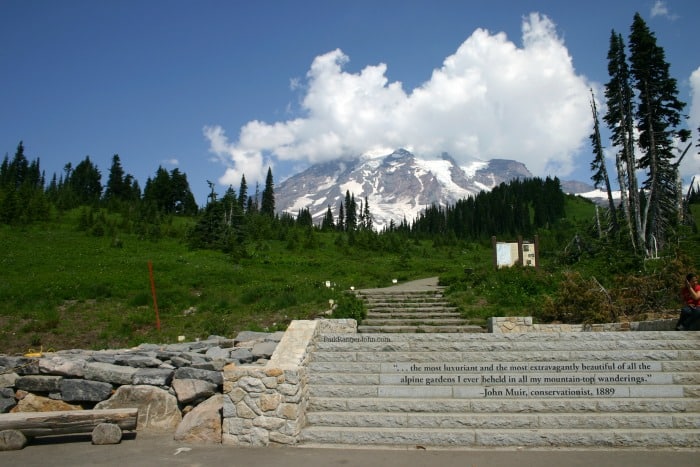 This national park contains the active stratovolcano Mount Rainier, the tallest volcano in the continental United States and the highest point in the Cascade Range, as well as its immediate surroundings. Mount Rainier is the dominant landmark for the Seattle-Tacoma-Bellevue metropolitan area.

Park fees for single visits are charged by the car, or by the individual on smaller vehicles or other modes of transportation. Additional fees apply for climbing permits. Backcountry permits are free, but limited in number. During the summer, the Wonderland Trail is so popular that backcountry permits are only available by lottery before May.

The park is open all year, although some roads, campgrounds, and visitor facilities close in winter. There is always some permanent snow cover near the glaciers.

Hikers in Mount Rainier National Park should be aware that the volcano is much more active than previously thought. Although no eruption is imminent as of the time of writing, Mount Rainier has erupted previously, the most recent time most recently in 1854. Even today, its ongoing geothermal heat is sufficient to keep both its craters free of ice in the midst of surrounding glaciers.

At all times of the year, hikers on the Wonderland Trail and in other parts of Mount Rainier National Park should be prepared for precipitation and sudden changes of weather. The western slopes of Mount Rainier are much wetter than its eastern slopes. In particular, Paradise is notorious for its 126 annual inches of rain and 26 annual feet of snow. The driest time of year is usually high summer from July to September. 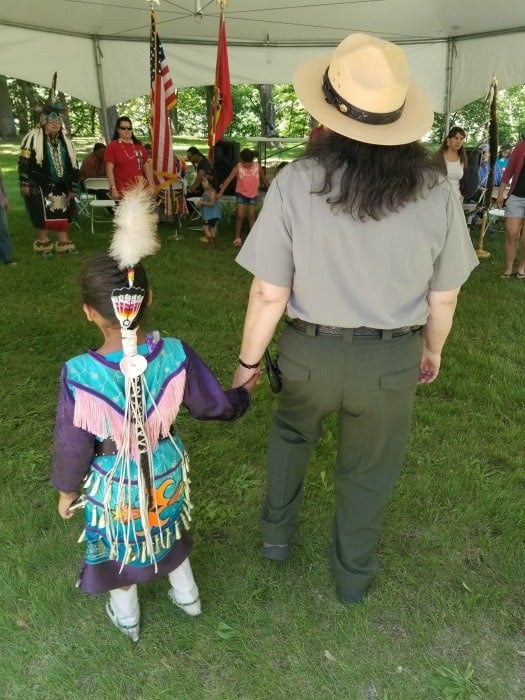 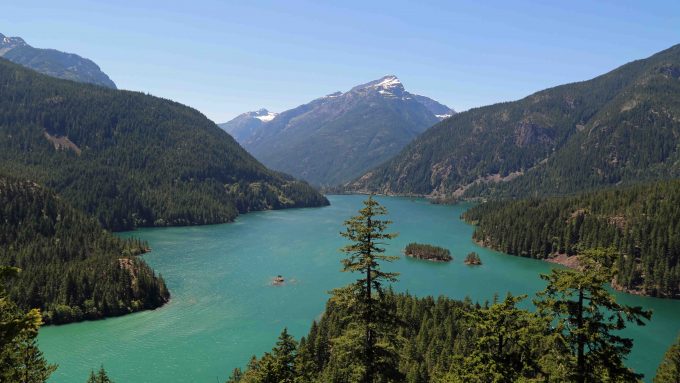 This national park is the northernmost of Washington's national parks. It consists of three separate park units, unified within the Stephen Mather Wilderness. There are no entrance fees, but there is a charge to camp at some campgrounds.

The park is open all year, although some roads, campgrounds and visitor facilities close in winter. High elevation trails above 2,000 feet, including the Pacific Crest Trail, will usually have some snow cover between October and July.

At all times of the year, hikers should be prepared for precipitation and sudden changes of weather. The western slopes of the Cascades are usually much wetter than the eastern slopes. The driest time of year is normally high summer from July to September.

Between April and November, North Cascades National Park can be reached from State Route 20 (the North Cascades Highway). State Route 20 beyond Washington Pass is closed in winter, and other parts of State Route 20 may also be closed because of weather. The Ross Lake National Recreational Area is also accessible from the north by the Silver-Skagit gravel road, which descends from Hope, British Columbia.

The Lake Chelan National Recreational Area and Stehekin Valley cannot be reached by car. It is accessible by passenger ferry, or by airplane from Chelan. 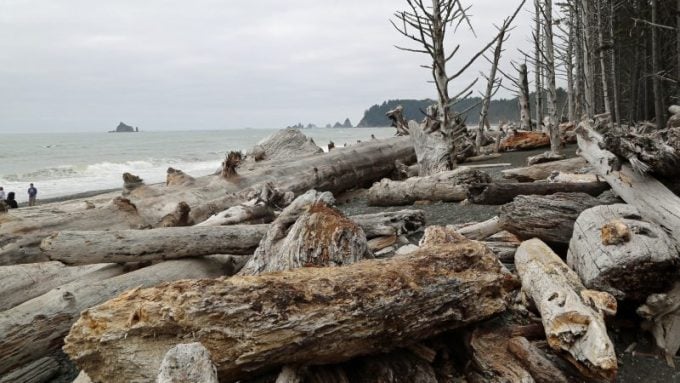 This national park is the westernmost of Washington's national parks. The Hoh and the Quileute native peoples both have reserves within the park. Olympic National Park has been designated an International Biosphere Reserve and a World Heritage Site.

Park fees for single visits are charged by the car, or by the individual on smaller vehicles or other modes of transportation. Additional fees apply for camping or backcountry permits.

The park is open all year, although some roads, campgrounds, and visitor facilities close in winter. High-elevation trails above 2,000 feet will usually have some snow cover between October and July. Trail sections that run along the beach are often completely covered during high tide.

At all times of the year, hikers should be prepared for precipitation and sudden changes in weather. The western mountain slopes are much wetter than the eastern slopes. For example, the temperate rain forest along the western valleys of Mount Olympus receives about 12 feet of rain each year. Even more, precipitation falls higher up, much of it as snow. The driest time of year is high summer from July to September. 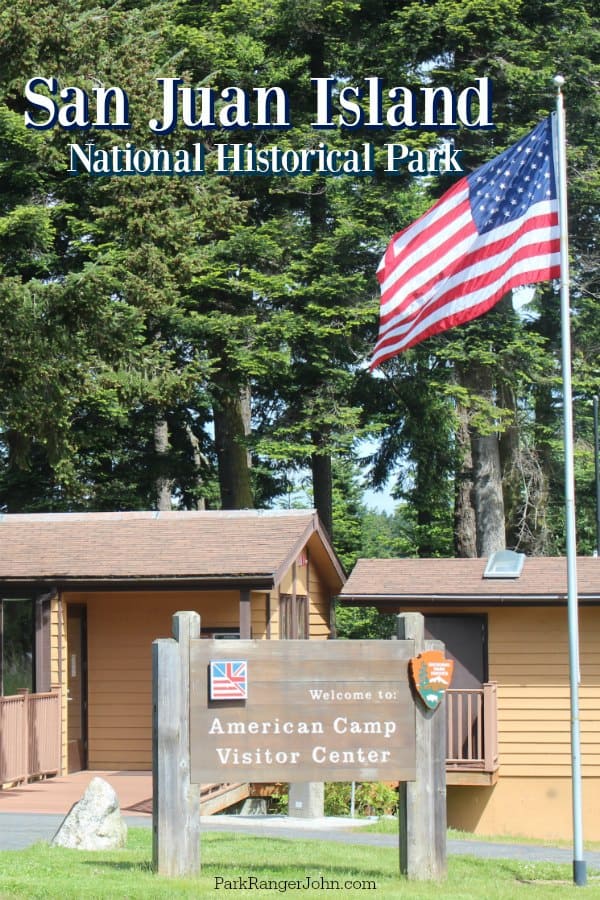 San Juan Island NHP is located in Northwestern Washington approximately 35 miles west of Bellingham on San Juan Island. In order to reach the park, you will need to take a ferry to Friday Harbor.

In 1859, American and British troops almost went to war over...a pig. Yes, there was almost a pig war.

An American Farmer shot a pig who had been eating his potatoes. The farmer refused to pay the money demanded by the Hudson Bay Company. The matter soon escalated and Britain dispatched warships and the Americans sent soldiers.

Lt. General Winfield Scott who was the commander of the U.S. Army came out to help mediate the situation. It took 12 years to reach an agreement over the island. During this time both the American and British maintained small military posts on the island. 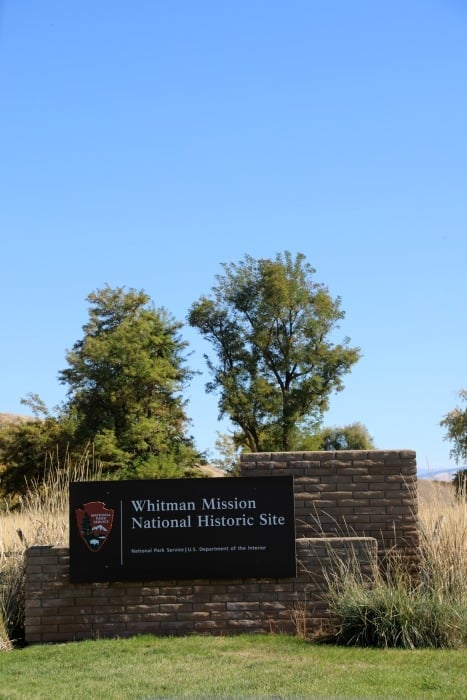 Whitman Mission NHS is located in Southeastern Washington approximately 45 miles east of Kennewick near Walla Walla. The park is open year-round and offers tours of the museum and historic grounds.

Marcus and Narcissa Whitman were among a small group of missionaries who traveled to Oregon country in 1836. They came west to convert Native American tribes to Christianity.

Multiple events led to the death of the Whitmans on November 29, 1847, when the Cayuse attacked the mission. Prior to this over half of the local Cayuse were killed during a measles outbreak.

The park provides an interpretation of the events that occurred at the mission along with walking trails that leads you through the historic mission grounds. 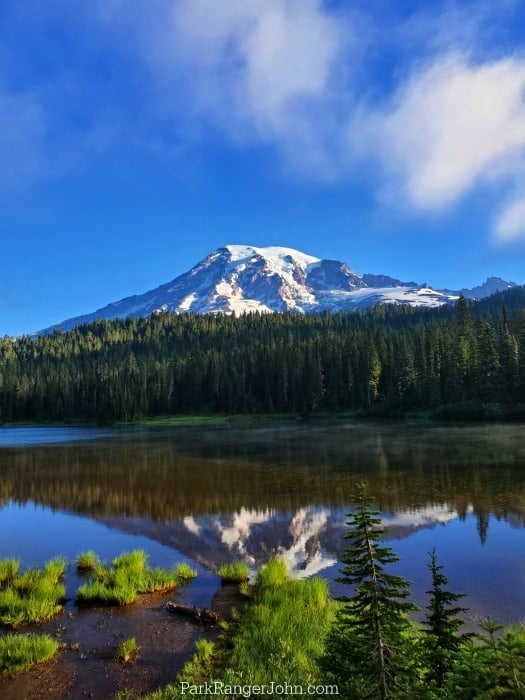 There are 15 National Parks in Washington that receive over 8.5 million visitors each year. These visitors produce over $526 million in economic benefits.