A bald eagle soaring above in the skies. Harlequin ducks gliding across a lake. Black bears and grizzlies fishing in icy cold rivers for salmon and trout. Deer grazing along trails while keeping an eye out for predatory mountain lions.

That would have been the scene 150 years ago witnessed by hearty explorers in the Cascades of northern Washington near the Canadian border.

Today, that scene has altered in the face of encroaching civilization. The glaciers are melting. Animal life has diminished and those still around hide far away from people. The salmon population has just about been fished out. 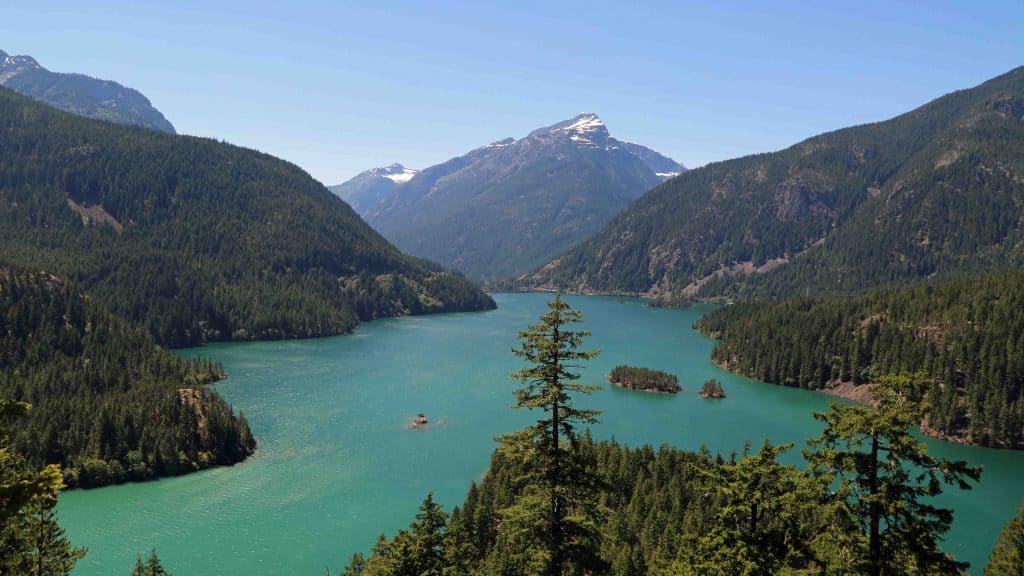 But the grandeur and beauty remain to be enjoyed while driving the North Cascades Highway which is nearly 100 miles long through national park and forest lands. The road has been labeled the most beautiful in the country and that boast is not idle because every inch of State Route 20 brings endless breathtaking vistas of natural beauty.

The scenic highway does not actually traverse through the national park but follows Skagit River along the Ross Lake National Recreation Area. The national park is divided by Ross Lake into north and south sections of remote and rugged wilderness accessible only to backpackers and mountain climbers via 400 miles of trails.

Visitors simply cannot drive into the park. The northern part stretches to the Canadian border and into the Chilliwack Lake, Skagit Valley and Manning Provincial Parks. The southern section is bordered at the south by Lake Chelan National Recreation Area.

The Cascades were named for the countless waterfalls. There is a distinct difference between the east and west sides. The eastern slopes facing high desert terrain is relatively dry. The west is a different story.

Moisture from Puget Sound slams into the mountains causing a yearly rainfall average of 110 inches. Hundreds of glaciers have formed with the largest in the park being Boston Glacier on the north slope of Boston Peak. The first to experience the area were the indigenous peoples and there are 270 archeology sites concerning them.

Traveling west on State Route 20, the North Cascades Highway basically begins at Rainy Pass but travelers have already been driving for miles through mountains and forests since leaving the town of Winthrop. The highway is closed winters when snowed in.

The climbing elevation begins as the road follows Granite Creek until turning alongside Ruby Creek. To the left, the park border is signified by a row of snowy mountain peaks. At any time wandering deer can be spotted. Water flows everywhere from trickling little falls to clean crisp streams.

Ruby Creek feeds into Ross Lake at Ross Dam. The lake stretches 24 miles north to the Canadian border. Those hiking in on the trails may spot a bald eagle fishing for salmon. There are plenty of spots along the highway to pull over and take in the grandeur.

More accessible to campers, boaters and fishermen are Diablo and Gorge Lakes that rest along the highway. Travelers can stop at Diablo Lake Overlook and explore Thunder Knob, Diablo Lake, Sketattle and Sourdough Mountain trails and visit the North Cascades Environmental Learning Center.

Just outside the small community of Newhalem is the North Cascades National Park visitors center. Park rangers can provide information and assistance to those wishing to hike into the park. Casual visitors can learn about the park, hike a short trail and have a picnic but beware of mosquitoes. The splendid scenery continues west on State Route 20 until drifting down into farmlands and civilization and finally connecting to the I5 at Bellingham north of Seattle.

The truly adventurous can fly, boat or hike into Lake Chelan National Recreation Area. Lodging can be found at Stehekin at the north end of the 50-mile glacier lake. There is also skiing and river rafting. The main visual attraction is the 312-foot high Rainbow Falls.

North Cascades National Park offers something for everybody and even those just passing through to get to the interstate will be treated to amazing beauty and reminder of what all of the area once looked like.