Pu`ukoholā Heiau National Historic Site is located on the Northwestern coast of the Big Island of Hawaii. The park is 35 miles north of Kailua-Kona Town. 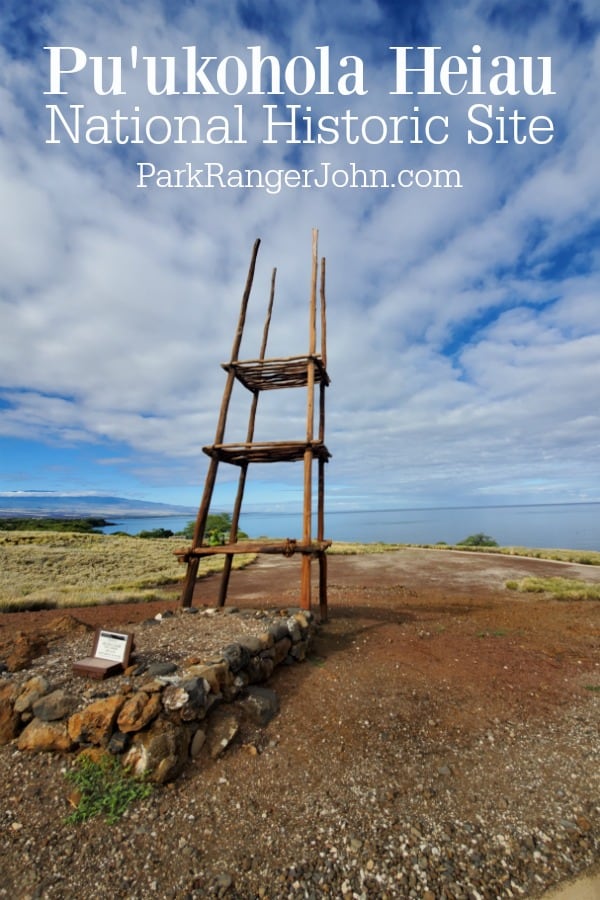 The 86 acre park protects one of the oldest structures in the National Park System. The Puukohola Heiau was built in 1790-91 by the Hawaiian leader Kamehameha I.

A heiau is a temple or sacred place where Kahuna (priests) communicated with the gods and advised the Ali'i (chief).

Pu'ukohola Heiau means a temple on the hill of the whale.

Kamehameha I built the large structure as an offering to the war god Kuka'ilimoku.

One interesting thing about the heiau structure is every rock was hand-carried along a chain of warriors. If a rock was dropped it would have to be picked up and sent back to the original space so it didn't bring bad energy to the heiau.

The lava rocks weighed between 20 to 100 pounds each and they had to be special ocean lava rock that is only found 20 miles away in Polulu Valley.

When you visit Pu`ukoholā Heiau NHS on the Big Island of Hawaii make sure and say hi to Park Ranger George! He is fantastic and has a wealth of knowledge about the site and why it is important to not only Hawaiian History but US History.

This temple unified the eight major Hawaiian Islands to one unit and one chief. In order to be a chief, you had to have a royal bloodline.

Before this heiau was built the islands had been warring for over five centuries.

The building of the heiau brought the warriors together and by the time it was done they were strong, fit, and unified.

One of the things we learned during our visit was that the war gods want a gift, they want a human sacrifice and the chief would have the most Mana.

The 1st Sacrifice was Kamehameha's cousin who was invited to the dedication ceremony in 1791.

The cousin accepted the invitation knowing what was going to happen when he arrived. He felt that it was his goddess Pele's wish for it to happen.

The bones of the Chief and the warriors were given to the gods of the temple. The bones were given because they carry the Mana, they would have been placed under rocks as a gift to the gods.

This heiau fulfilled the prophecy of unification and ended 5 centuries of wars among the Hawaiian Islands.

The park visitor center opened in 2007 and is an open-air museum and space to learn more about the park. 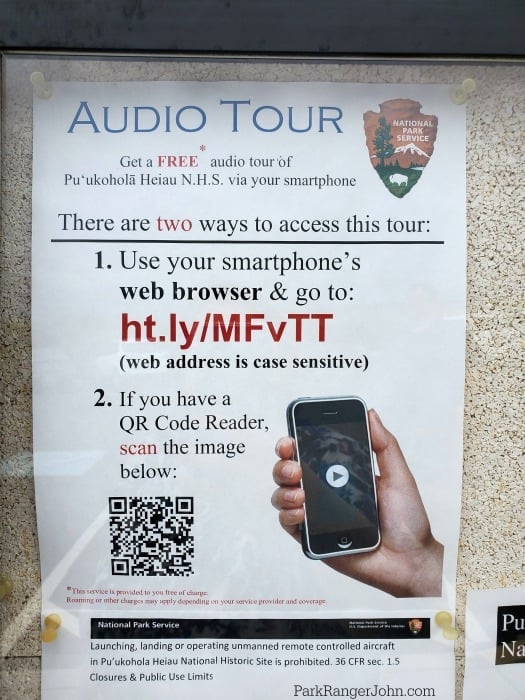 The cell phone tour is a great way to learn more about the history of the park while exploring the trails.

Becoming a Junior Ranger is a great activity for any visitor to the park. You have the chance to learn more about the park and dive into the park in a fun new way.

The park movies are played outside of the visitor center with a gorgeous view of the water. There are multiple movies you can choose from.

The loop trail leads you to the Heiau and provides an epic view of the water.

There is very little shade along the trail so you will want to bring a hat and sunscreen. You can fill your water bottle up at the visitor center.

Along the walking trail, you can see an example of a Hawaiian LeLe (offering tower)

You can also see a Kapu that designated that the area was forbidden.

When you walk up to the rocks pay close attention to how they are stacked. They were dry-stacked with no concrete or mortar to hold the rocks in place. It is one giant rock puzzle with the rocks perfectly placed to hold the structure up.

During the year the park offers demonstrations and activities including activities such as lei making, kukui nut top, and mini feather kahili. 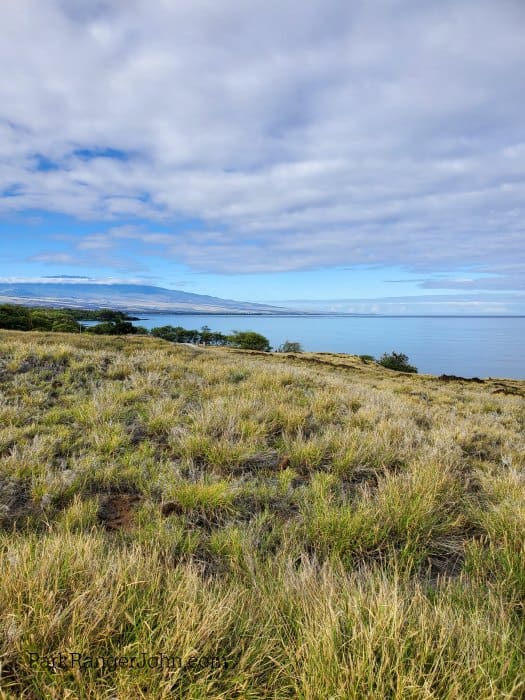 Look for sharks in the bay

Most days you can see sharks returning to the bay and the Hale o Kapuni Heiau temple that is submerged and dedicated to the sharks. 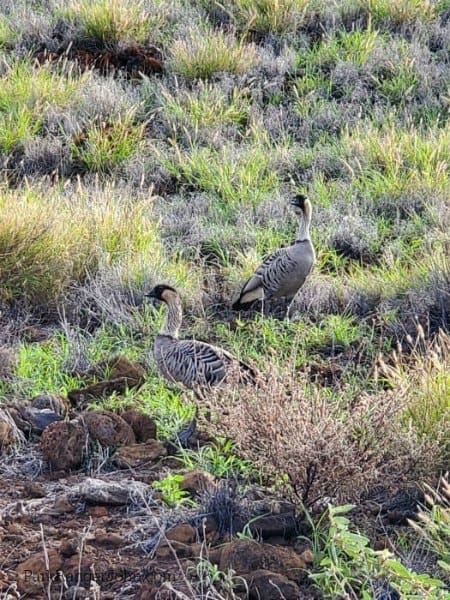 This park is a great place to look for Hawaiian birds including the state bird the Nene Goose. We saw a pair of Nene near the Heiau while walking around the park. 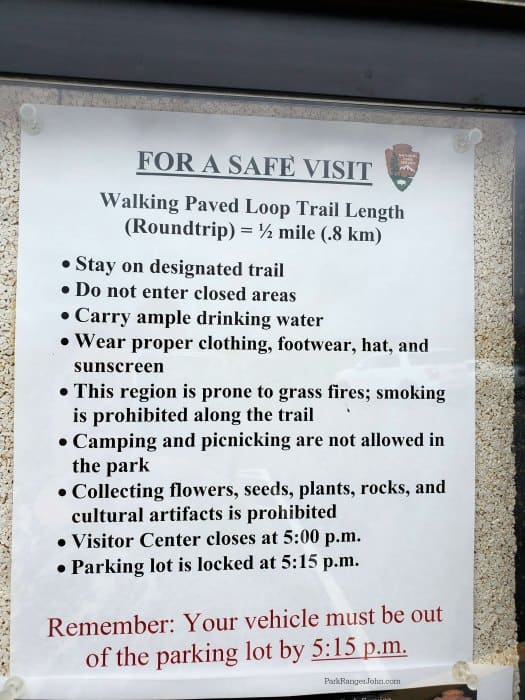 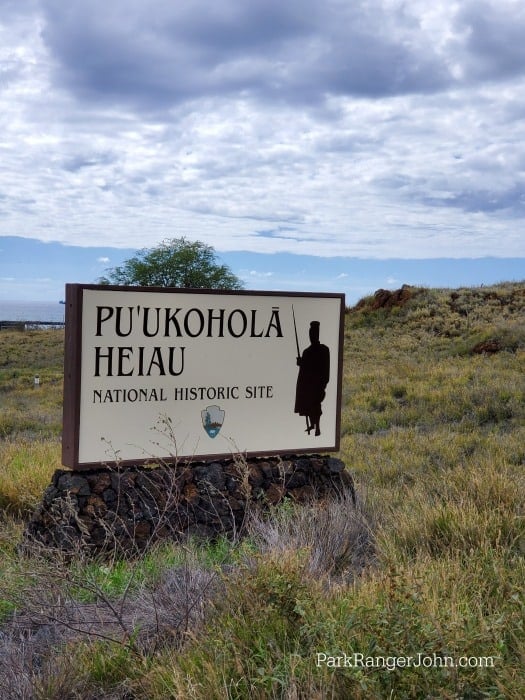 Ala Kahakai National Historic Trail -A portion of the trail can be accessed from the park.

Check out all of the National Parks in Hawaii

I know they are not technically neighboring but they are the closest states.