The Appalachian Trail is also known as the Appalachian National Scenic Trail, or A.T. is a long-distance hiking route in the East of the United States that has a length of about 2,180 miles. It extends from the Springer Mountain, in the state of Georgia, to Mount Katahdin in Maine.

Once just a dream and idea to a local wilderness and animal lover, The Appalachian Scenic Trail now covers thousands of acres of wilderness and protects wildlife.

Roughly 2200 miles of wilderness that run from Maine to Georgia is collectively known as the Appalachian Trail. The protection of the trail is guaranteed by federal and state ownerships of the land or included as right of way. But another large part is coordinated by 4000 volunteers who devote over 175,000 hours into cleaning and maintaining the trails.

In Canada, it connects with the Appalachian International Trail, whose length is of 1926 miles, that unites Monte Katahdin and the Strait of Belle Isle (North of Newfoundland) on the coast of the Atlantic.

The maintenance of the trail is done by some thirty hiking clubs and numerous associated companies. It is managed by the National Park Service and the Appalachian Trail Conservancy. The Appalachian Trail (AT) is well known in the United States and Canada because of the many hikers that dream, at least once in their lives of hiking the AT. Those who achieve it - very few - are considered great sports figures. They are called thru-hikers.

History of the Appalachian Trail

The trail was created by Benton MacKaye, a forest engineer who, in 1921, conceived a grand tour that would unite, for the inhabitants of large cities, a series of farms, work camps, and wild areas.

The Appalachian National Scenic Trail was the brain storm of Benton MacKaye. In 1921 he came up with the idea of connecting states through a regional area by saving wilderness areas and fighting against urban sprawl. His article entitled “An Appalachian Trail: A Project in Regional Planning” brought the trail to reality.

Benton MacKaye was born in Stamford Connecticut on March 6, 1879. His family settled in New York City in 1885 and during this time the family took to visiting a quiet town 30 miles from their home. Benton fell in love with the beauty and solitude he saw in the country.

Benton didn’t do well in school and was often off campus drawing maps or sketching wildlife. While attending high school in Massachusetts he charted the landscape in numbered notebooks, documenting vegetation, landforms, rivers and local roads.

His love of wildlife continued to grow after high school when he entered Harvard College as the first registrant in the college’s forestry school in 1896.

While the trail was completed in 1937 it was the hard work, devotion, and boundless energy of countless volunteers that made it what it is today. Benton MacKaye died in 1975 with his Appalachian Trail coming to fruition.

In 1929, retired judge Arthur Perkins and a young associate of his, Myron Avery, join Ned Anderson, a farmer from Connecticut, to map and extend the trail from Dover (New York State) to Kent (Connecticut) and then to Bear Mountain, on the border with Massachusetts.

The idea of a coherent path was published in 1921 by Benton MacKaye. Along the way, hostels, nature conservation stations, and even self-sufficient communities will be established.

In 1925, the Appalachian Trail Conservancy (ATC) was founded as a non-profit organization that still exists today. The final destination was the connection of the highest points in the east: Mount Mitchell and Mount Washington.

In 1948, Earl Shaffer was the first to walk the Appalachian Trail in one season, a so-called thru-hike, traveling from Georgia to Maine, northbound. Later, he did so in the opposite direction, so he was the first to walk the AT in both directions. 50 years after his first thru-hike, at the age of 80, Earl Shaffer repeated his thru-hike. This makes him the oldest thru-hiker on the Appalachian Trail. 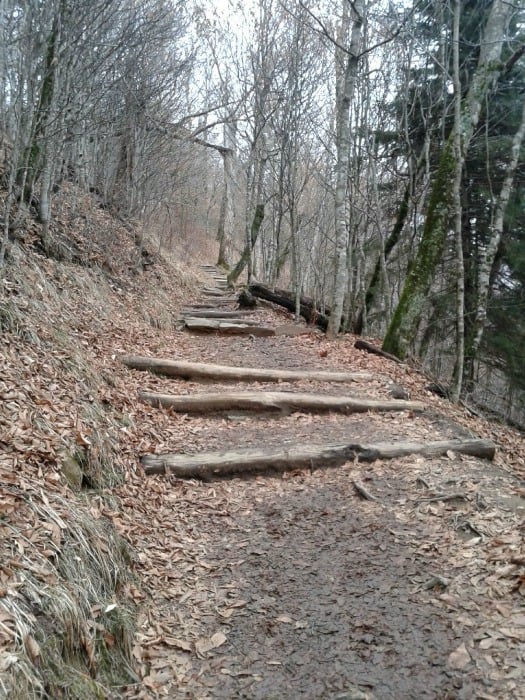 The mileages listed are not gospel. Rerouting of the Trail causes it to change from year to year. The Trail conservatory puts out a data book each year with corrected mileage. If a visit is planned to any section of the park it is important to find out dates, time, and operations before making arrangements to camp or hike. The Appalachian Trail Conservancy (ATC) coordinates with other park officials to make sure the integrity of the trail is upheld.

Although encounters with bears are rather rare, it is recommended to stow your food in a bear-proof canister on the trail and keep it out of reach of bears at night.

There are several species of venomous snakes on the trail, including the Rattlesnakes and the Copperheads. Both are more likely to be found in dry, rocky sections of the trail but for most hikers, ticks, mosquitoes, and black flies are the biggest issues.

The Appalachian Trail is marked in its entire length by white color markings, which have a width of about 2 inches and a height of about 6. By-ways, alternative routes, viewpoints, and car parks are provided with similar blue color markings.

The trail has over 250 shelters and campsites that are available for hikers. Shelters, whose names vary from place to place, are generally a three-sided structure with a wooden floor, although some shelters are much more elaborate. Shelters are usually spaced a day's walk or less with most often a water source and with a rough toilet.

The Appalachian Mountain Club (AMC) for example, operates a system of eight private shelters on 56 miles of trail in the White Mountains of New Hampshire. These are significantly larger and offer full-service accommodations with meals during the summer months. The Fontana Dam in North Carolina is nicknamed the "Hilton Fontana" because of the variety and importance of amenities (toilets, proximity to a post office and a restaurant). 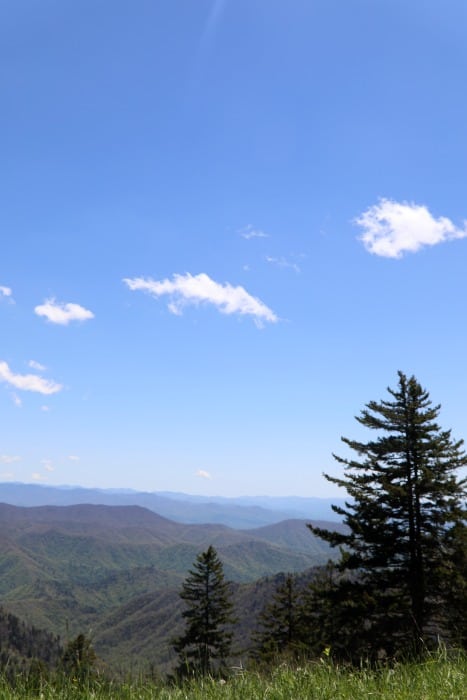 Shelters are usually self-service, especially in the off-season. They are usually maintained by local volunteers and almost all the shelters have one or more ways to keep food out of reach of any animals.

The Appalachian Trail is relatively safe. Most injuries or incidents are comparable to outdoor activities. Most of the risks are related to weather conditions, human error, plants, animals, diseases and human activities along the path.

The Appalachian Trail is so well-marked and heavily traveled that you're not likely to need a compass. However, map and compass -- along with the knowledge of how to use them -- are usually recommended for long-distance trails.

You could even get by without maps on the Appalachian Trail, but it is really best to have them. They have contour lines help you visualize the topography to plan the day's hike, and they show the locations of water and shelters.

Facts about the Appalachian Trail

The Appalachian Trail is the first completed national scenic trail and crosses six other sections of the national park system. It touches 14 states from Maine to Georgia and is maintained by 30 different trail clubs with countless volunteers.

The trail gives a home to more than 2000 rare, threatened endangered plants and animals. It is also home to the longest footpath at 2,178 miles and 165,000 blazes. Currently, more than 11,000 people have reported hiking the entire length of the Trail. It is calculated that it takes 5 million footsteps to walk the length of the Trail.

* Georgia has 75 miles of the trail and its highest point is Blood Mountain.
* North Carolina has 88 miles. The Fontana Dam Shelter with the great view of Lake Fontana is one of the great trailside trips. The lake area has hot showers, flush toilets, a shuttle to an all-you-can-eat buffet, plus a short hike to a post office.
* Tennessee has 293 miles with a section that runs below the summit of Clingmans Dome in Great Smoky Mountains National Park.
* Virginia has the longest section of the trail with 550 miles. The most photographed spot on the trail is also in Virginia, McAfee Knob. The “Trail Days” held in Damascus, Virginia sees large amounts of hikers each year from the trail.
* West Virginia has only 4 miles of the trail but it has Harpers Ferry, which is considered the “psychological midpoint” of the trail.
* Maryland has 41 miles and is considered a good hiking trail for beginners. In this section, hikers are required to stay at designated shelters and are not allowed to camp off-trail.
* Pennsylvania has 229 miles and is famous for having long stretches of rocky trail. There are also many trail towns that are popular stops with hikers. With hikers, Pennsylvania is considered one of the easier parts of the trail.
* New Jersey is the second-largest section of the trail with 72 miles. Large numbers of black bears have been seen on this section. In 2015 a hiker was bitten while sleeping.
* New York has 88 miles and contains very little change in elevation. This section passes through Bear Mountain State Park and is the oldest section of the trail completed in 1923.
* Connecticut has 52 miles and it lies mostly on the ridge. The trail also passes within one mile of Kent and the business district.
* Massachusetts has 90 miles and is maintained by the Berkshire Chapter of the Appalachia Mountain Club.
* Vermont has 150 miles of the trail and crosses the Connecticut River.
* New Hampshire has 161 miles and is almost completely within the White Mountain National Forest.
* Maine is the final 281 miles of the trail and is very difficult. Moose are seen on this leg of the trail and a canoe ferry ride crosses the river. Maine also contains the “100 –Mile Wilderness” which is the most isolated section of the trail.

Additional resources on the Appalachian Trail