There are 18 National Parks in Maryland that tell so many amazing stories! These parks include epic Assateague Island National Seashore, Harpers Ferry, Clara Barton National Historic Site and so many more!

Maryland has gorgeous coastal seashores along the Atlantic Ocean along with being right on the Chesapeake Bay the largest estuary in the United States. There are also ten affiliated sites that partner with the National Park Service. 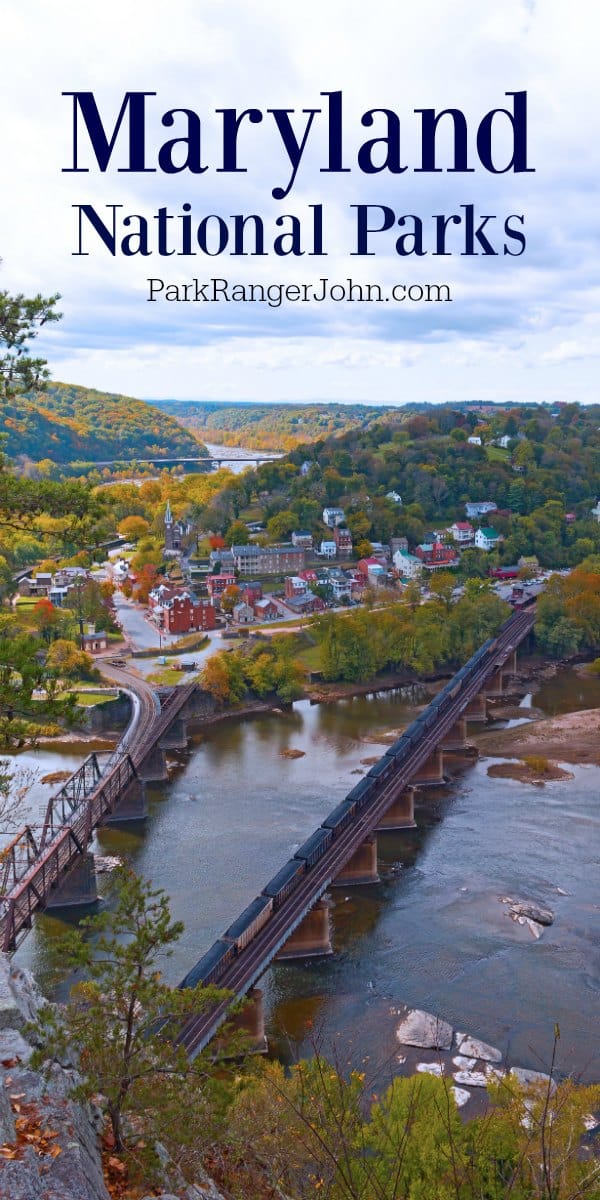 Maryland National Parks include National Heritage areas, National Battlefields and so much more! Have you visited any of these parks?

Antietam National Battlefield is located in Western Maryland approximately 60 miles northwest of Washington D.C. The park offers the opportunity to tour the battlefield and visit the park museum.

The battle at Antietam was fought on September 17, 1862. The Confederate General Robert E. Lee led his army across the Potomac River into Maryland. He met the Union forces led by Major General George B. McClellan near Antietam Creek.

The battle involved nearly 100,000 soldiers fighting with more than 23,000 soldiers losing their life. On September 18th the North and South cared for their wounded and buried their casualties.

On the night of September 18th, General Lee withdrew his troops back into Virginia. The retreat was the signal President Lincoln had been hoping for. He declared freedom for enslaved people in the South.

Abraham Lincoln issued the initial Emancipation Proclamation on September 22, 1862. From this point forward the Civil War was about preserving the Union and ending slavery.

Today you can take a self-guided 8.5-mile auto tour that includes 11 stops around the battlefield.  If you would like to learn more you can hire a battlefield guide who will accompany you around the auto tour.

You can also visit the Pry House Field Hospital Museum which is located in the house that served as General McClellan's headquarters during the battle.

41 miles of the Appalachian Trail passes through Maryland.  The elevation ranges from 230 feet to 1,880 feet in elevation.

The trail through Maryland is a fantastic place to enjoy a three or four-day hiking trip. You can also enjoy day hikes along the trail.

For more information, you may want to order the Maryland Appalachian Trail Guide or check out the Nat Geo topographic map.

This is a really cool National Park in Maryland!

The park was an area that had been decimated with industrial and unsustainable agricultural processes in the 1930s. During the Great Depression, the area was chosen to become a demonstration area.

People were hired to rehabilitate the landscape while also creating a new recreation area. Both the Civilian Conservation Corps (CCC) and the Works Progress Administration (WPA) worked on the project.

Visitors can enjoy more than 25-miles of hiking trails including six miles of trails maintained for horseback riding.  Famous presidential retreat Camp David is located within Catoctin Mountain Park but is not open to the public.

In 1828 the Chesapeake and Ohio Canal construction was started. Over the next 22 years 35,000 workers many of them immigrants from Ireland and Western Europe dug the canal and built aqueducts, culverts, and locks.

The first five boats filled with coal traveled the length of the canal in October 1850.  At the peak of operation, the canal saw more than 540 boats in service with most of them carrying coal.

Visitors today can see 184.5 miles of the old canal right of way from Georgetown neighborhood in Washington D.C. to Cumberland, Maryland. The towpath has been restored so you can see the path where mules pulled boats.

There are five developed drive-in campgrounds along the canal as well as 30 hiker-biker sites. In Maryland, you can visit the visitor centers in Brunswick, Williamsport, Hancock, and Cumberland.

The Chesapeake Bay Watershed is the largest estuary in the United States. The National Park Service partners with over 170 sites and trails in the Chesapeake Bay Gateways and Water trails Network.

Visit the Find Your Chesapeake website to find out more about the activities within not only Maryland but Washington D.C., New York, Pennsylvania, Virginia and West Virginia.

Clara Barton was born in 1821 in Massachusetts. She dedicated her life to caring for injured soldiers during the Civil War. She became known as the "Angel of the Battlefield".

She worked with the International Red Cross during the Franco-Prussian War and was inspired to establish the American Red Cross in 1881.

Her goal was to help those who suffered from natural disasters such as fires and famines. The American Red Cross's resources were put to good use in the Johnston Flood of 1889.

In 1897 Clara Barton moved into the American Red Cross warehouse in Glen Echo, Maryland. She lived in the house until she passed away in 1912. The Clara Barton NHS was the first National Park Service site dedicated to the accomplishments of an American Woman.

Fort McHenry NM and Historic Shrine are located in Baltimore Harbor. The park offers tours of the historic fort and museum.

Fort McHenry is a star-shaped fort on the shores of Baltimore Harbor. The fort construction began in 1799 and was completed in 180. It was named after James McHenry who was the Secretary of War from 1796 to 1800.

During the War of 1812 on September 13, 1814, the fort came under fire from British Ships. Francis Scott Key who was a lawyer and amateur poet watched the attack. The next morning he saw the American Flag still flying over the fort "by dawns early light".

Visitors can take a self-guided tour of Fort McHenry, watch the park movie and watch the flag raising and lowering ceremonies.

Fort Washington Park is located near the community of Fort Washington, Maryland. The park offers a 3-mile trail that follows the perimeter of the park boundary that is great for looking for wildlife.

You can also enjoy fishing on the Potomac River. You can call the Fort Washington Park Visitor Center for more information at 301-763-4600 on opening hours and activities.

George Washington Memorial Parkway was designated a park and playground in the 1930s. There are quite a few sites along the parkway as it leads towards Washington D.C. to visit and explore.

Greenbelt Park is a natural oasis just outside of Washington D.C. You can enjoy camping, nine miles of trails and three picnic areas.

Hampton NHS is located in Northern Maryland approximately 9 miles north of Baltimore. You can enjoy free guided tours of a restored mansion as well as self-guided tours of the farm buildings, gardens and other parts of the estate.

The mansion was finished in 1790 and was the largest private residence in the United States at that time. The estate remained in the Ridgely family until 1948. The estate was designated a National Historic Site in 1948 and was the first site created because of its architectural significance.

Visitors can enjoy guided tours of the restored mansion as well as the opportunity to explore the grounds of the estate.

Harpers Ferry NHP is located in Central Maryland along with Eastern West Virginia and Northern Virginia. The park provides the opportunity to explore a large number of historic sites.

Harpers Ferry is located at the confluence of the Potomac and Shenandoah Rivers. George Washington pushed for the establishment of a federal armory and arsenal that used water power to run the machinery that manufactured weapons.

During the Civil War in 1961, the Confederate and Union armies fought over these weapons and equipment. In 1862, Confederate Major General Thomas "Stonewall" Jackson captured 12,700 Union Troops here.

Visitors can explore the Lower Town that includes the dry goods store, tavern, confectionery, clothing store, and the fire engine house. In the Maryland Heights section, you can view the old Chesapeake and Ohio Canal.

The park was established in 2013 to honor the accomplishments of Harriet Tubman. She was born into slavery in 1820. Harriet Tubman escaped slavery to become the best-known conductor of the Underground Railroad.

Monocacy National Battlefield is located in Central Maryland approximately 45 miles west of Baltimore. The park offers the opportunity to check out a 6-mile self-guided auto tour that winds through the battlefield site. There are multiple walking trails along with living history demonstrations.

During the summer of 1864, the Confederacy had the opportunity to march through the Shenandoah Valley and capture Washington D.C with almost no opposition. Realizing this opportunity was available Confederate General Robert E. Lee ordered Lieutenant General Jubal Early and 15,000 troops to attack.

The battle forced the Confederacy to delay their attack on Washington D.C. by a day. This provided the Union with the opportunity to bring in reinforcements and prepare for the Confederate attack.

Thomas Stone NHS is located in Southern Maryland approximately 30 miles south of Washington D.C. The park offers the opportunity to tour the historic home of Thomas Stone and enjoy trails and old roads open to hiking.

Thomas Stone was one of 56 signers of the Declaration of Independence along with being a member of the colonial-era Continental Congress. Thomas Stone purchased a century-old estate called Haber de Venture in 1770. The estate name was later written as one word - Haberdeventure.

Mr. Stone began building his family home and farm. When he passed away in 1787 the plantation had grown to over 1,000 acres. The estate remained in the Stone family until 1936. Part of the main house burned in 1977.

The National Park Service purchased the Haberdeventure in 1981. They reconstructed the house and opened it to the public in 1997.

The Washington – Rochambeau NHT covers 680 miles across ten states. The trail offers the chance to explore the same routes the American and French soldiers took in 1781 and 1782 during the Revolutionary War.

There are 18 National Parks in Maryland with over 6.5 million visitors. These visitors produce over $234 million in economic benefits.