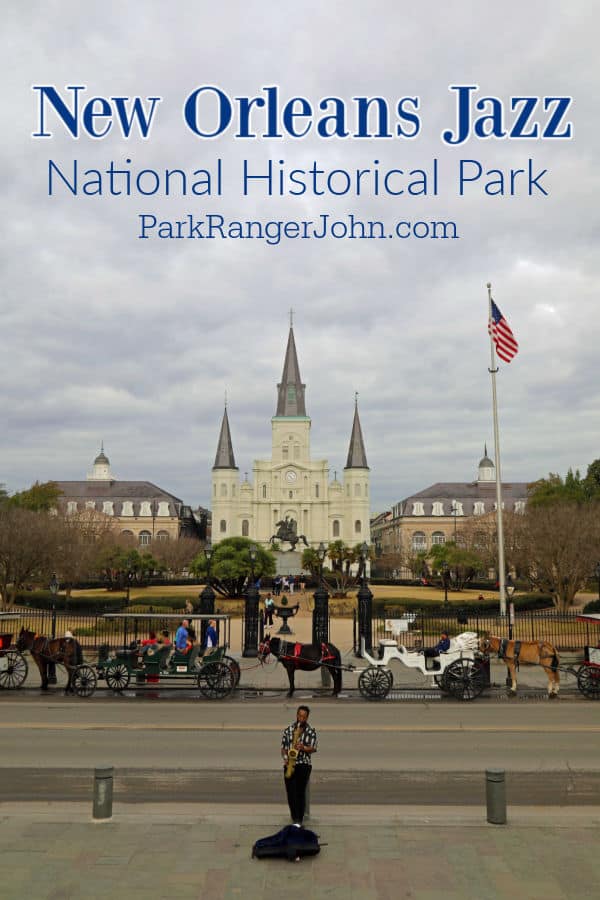 New Orleans Jazz National Historical Park is a park, unlike many other parks. You have to go into a visit to New Orleans Jazz NHP with an open mind and willingness to visit many different places.

The visitor center is truly the information center for the park but from there you are on your own journey to experience and enjoy New Orleans Jazz.

Make sure and plan time in your visit to check out a local jazz show or hear live music.

You can learn about the history of Jazz at the visitor centers but you truly can't soak it all in without hearing at least a little bit of live music. 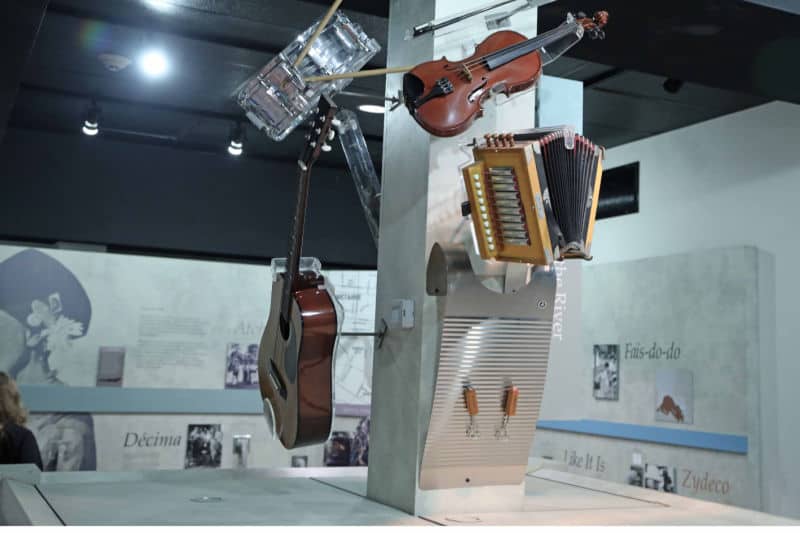 Yes! This US National Historical Park does a great job sharing the importance of Jazz music to New Orleans.

This park is a bit different from many other parks so you want to be prepared that a lot of it is about places other than the visitor center.

New Orleans Jazz National Historical Park is located in the Treme neighborhood of New Orleans, near the French Quarter.

The park was designated in 1994 to preserve information, resources, and sites associated with the history of jazz in New Orleans.

The land between the southern mouth of the Mississippi River and Lake Pontchartrain was a rich opportunity for settlement long before the Europeans were attracted to the area.

Indigenous people knew the value of inhabiting an area with considerable ecological resources and numerous points of access to rivers and bays.

The streets laid out and created at that time became what is known today as the French Quarter.

France later ceded the land to Spain and in 1803 the land became part of the United States after the Louisiana Purchase.

Although the city was no longer owned by France, the French language, religion, and customs stayed prevalent.  At this time, also prevalent were the Creoles – a large population of native-born citizens who were descendants of French immigrants.

Their sophisticated culture stood out from any other American city at the time.  In the 19th century, New Orleans became a famous spot for immigrants because of its location as a major seaport.

Immigrants from numerous nations arrived and blended with the French and Creoles as well as African natives brought from the West Indies.

The unique blend of these groups, along with a very strong influence from African tribal instruments, chants, and rituals brought about the origin of jazz in New Orleans.

Long before jazz was born, New Orleans had a passion for music.  It was the first city in North America that had an opera house.

Musical events were consistently part of every social gathering in the city from dances to funerals.

One large aspect that separated New Orleans from the rest of the south was the fact that they allowed the African culture to thrive.

Slaves were allowed to congregate in Congo Square and share a fellowship of music and dancing.  This area is on the edge of the French Quarter inside the Historical Park.

Additionally, during the 19th century, New Orleans was home to the largest population of free people of color.

These groups made up a large part of the musical groups in the city.  It was during these performances that the style of spontaneous music was born.

Instead of playing a specifically rehearsed music number, performers put on a show of a more improvisational nature and used emotion to drive their music.

Built-in 1820, Perseverance Hall was originally a Masonic lodge, the first in Louisiana.  Located within the National Historical Park, this site was largely used as a dance hall for Louisiana Creole jazz performances to entertain black and white citizens alike.

It has long been asserted that a man named Buddy Bolden was the first jazz musician.

Born in New Orleans in 1877, Bolden was a cornet player who began a musical group and gained much fame during the years between 1900 and 1907.

Mixing a variety of sounds from gospel music, to ragtime to blues to the unique improvisational style, “King” Buddy greatly influenced the younger musicians to come in New Orleans.

Sadly, in 1907, at the age of just 30, Bolden’s musical life abruptly ended when he was admitted to the Louisiana State Insane Asylum.  Bolden was diagnosed with dementia praecox, which today we call schizophrenia.

It is believed that there is a strong chance Bolden was suffering from pellagra, a deficiency of niacin that was prevalent in the black population in the south at that time.  Bolden died at the asylum in Jackson, Louisiana at the age of 54.

The majority of New Orleans Jazz National Historical Park consists of four acres inside Louis Armstrong Park.  Additionally, there is a visitor center and concert venue a few blocks from the French Quarter.  Louis Armstrong has been called the most influential jazz player of all time.

Born in 1900 in New Orleans, Louis Armstrong grew up in extreme poverty during the time period when jazz was just getting started.

In 1913, after firing a gun in the air, Armstrong was sent to the Colored Waifs Home in New Orleans as a juvenile delinquent, which may have been the best thing that could’ve happened to him.

It was here that Armstrong received music lessons and music became his ultimate passion.  He learned the cornet and grew his skill to rival the leading cornet player in New Orleans, King Oliver.

In 1922, Oliver asked Armstrong to play the second cornet in his band in Chicago.  Armstrong also began playing the trumpet for other big-name bands.

Jazz was beginning to be known throughout the country and Armstrong was soon encouraged by his new wife, Lil Hardin, to begin his solo career.

Armstrong moved from Chicago to New York City and soon toured the country.  His legacy was that of trumpeter, soloist, singer, and eventually film star.

Armstrong is credited with taking the newfound art of jazz in New Orleans at the start of the 1900s and turning it into a style of music that is still loved today.

A beautiful example of a melting pot of people, styles, and cultures, the New Orleans Jazz National Historical Park celebrates the origin of jazz in America.

The people and places that created a musical style are still very much alive in the city a century later. 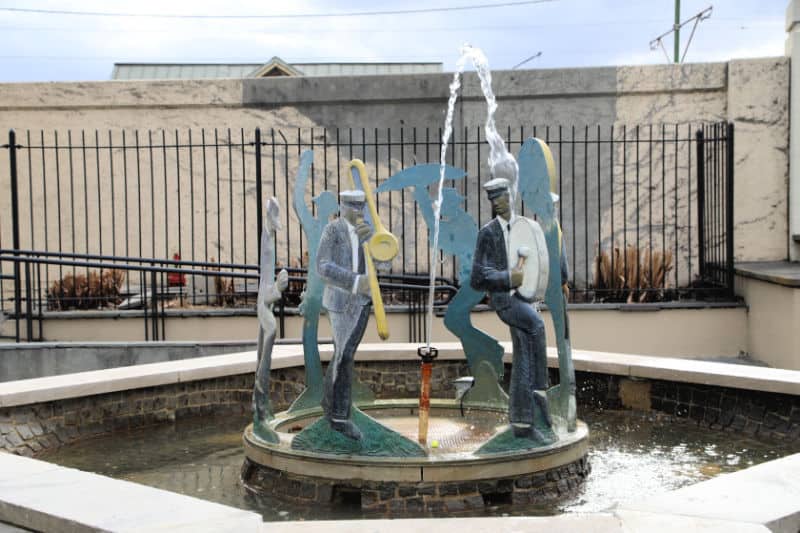 Pets are not allowed in buildings of the park.

There are paid parking lots spread through New Orleans.

There are no specific restaurants dedicated to the park but there are a ton of French Quarter Restaurants and other great restaurants nearby.

There are over 40 public EV Charging ports within New Orleans 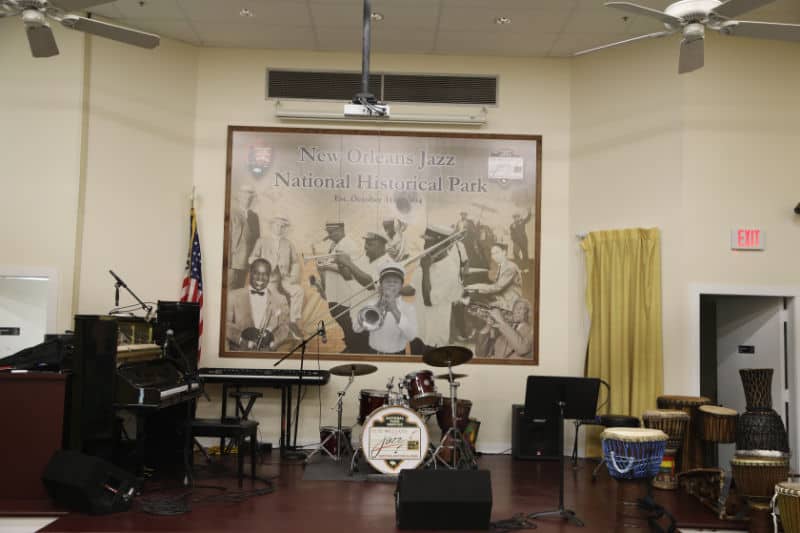 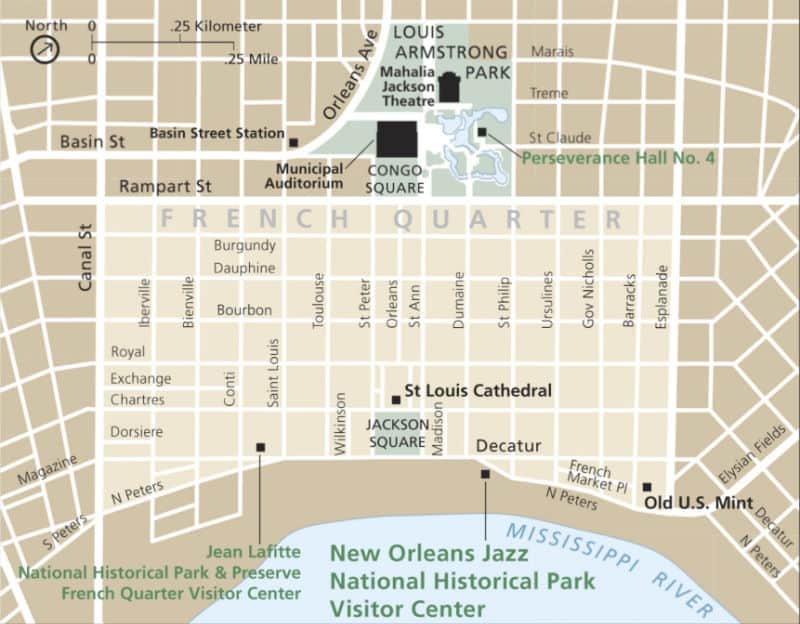 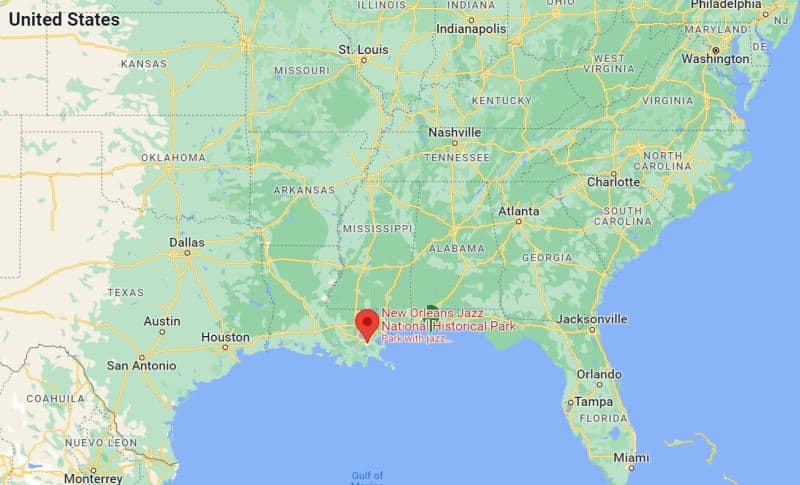 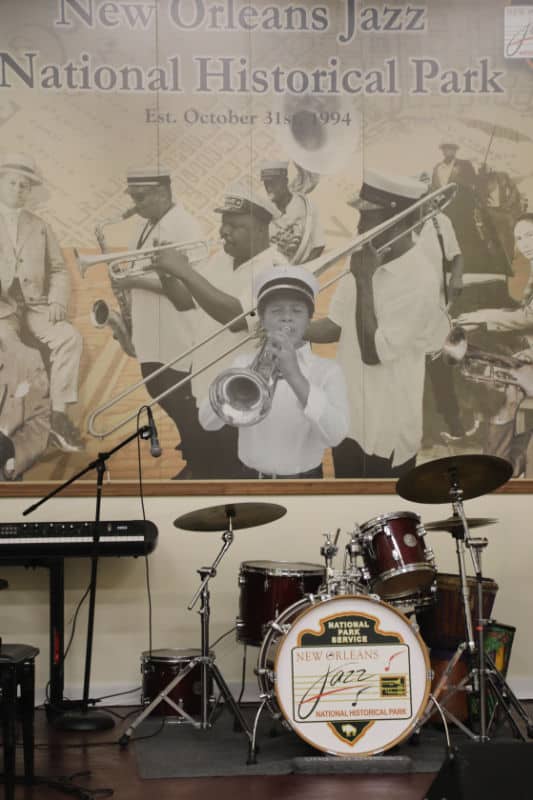 The best time to visit New Orleans is spring and fall when the muggy weather is a little more manageable.

The hottest weather in New Orleans is from May 19th to September 22nd when the average daily temperature is above 87 degrees.

The coldest weather is from November 29th to February 24th when the average daily temperature is below 69 degrees. 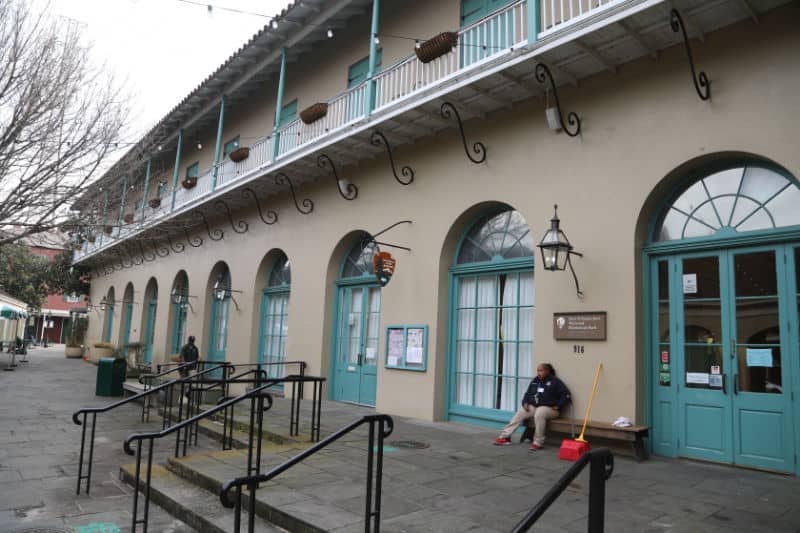 The visitor center is truly the informational heart of the park.

The Junior Ranger program is pretty easy to complete with a visit to the visitor center. There is a maze, object find, word search, and matching famous musicians to their instruments.

The Junior Ranger program has a great list of kid-friendly places to hear live jazz music in New Orleans.

One of the really cool things about the New Orleans Jazz NHP is most of the rangers are musicians.  You can attend a ranger program that includes live music and a discussion of the music.

Pick up a map at the visitor center and head out to explore more of New Orleans.

There are 11 stops on the walking tour that gives you more information about the heart of New Orleans Jazz.

There are no real hiking trails in the park but you do want to be prepared for lots of walking.

Make sure to wear comfortable shoes, bring water with you, and be prepared for heat and humidity.

How to beat the crowds in New Orleans Jazz NHP?

The best way to beat the crowd is to visit during the off-season.

Where to stay when visiting New Orleans Jazz NHP

There are a ton of lodging and vacation rentals available in New Orleans. Click on the map below for additional options.

Nearby campground options include:

This campground offers a restaurant, showers, and more.

Check out additional campgrounds on CampSpot. 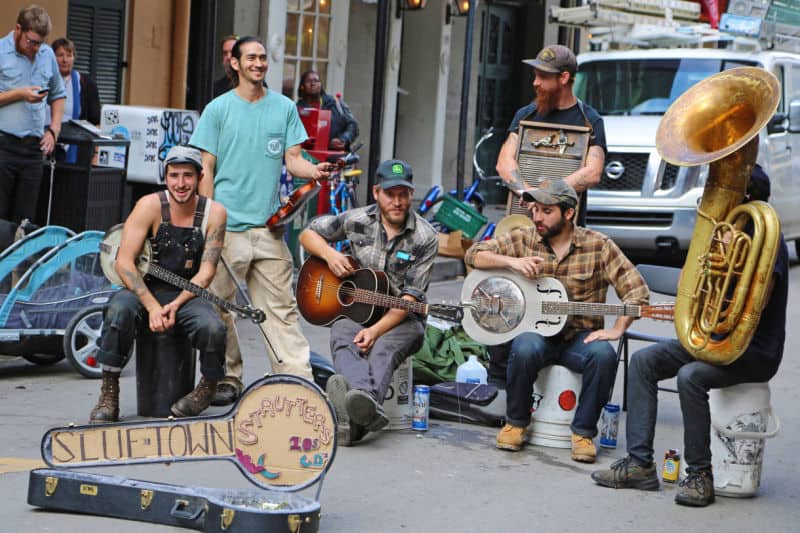 Don't miss all of these fun things to do with kids in New Orleans! There are so many fun activities and things to try in the city!