The first thing I tell everyone is that Yosemite is a great park for all seasons but why I love Yosemite in the winter is that it is full of Christmas Spirit. I then start talking about all the Christmas Festivities and holiday traditions that are held at Yosemite and the Ahwahnee Hotel each year including the Bracebridge Dinner. By the time I have told them about the magic of Yosemite in the Winter, I see most people already thinking of an upcoming trip! 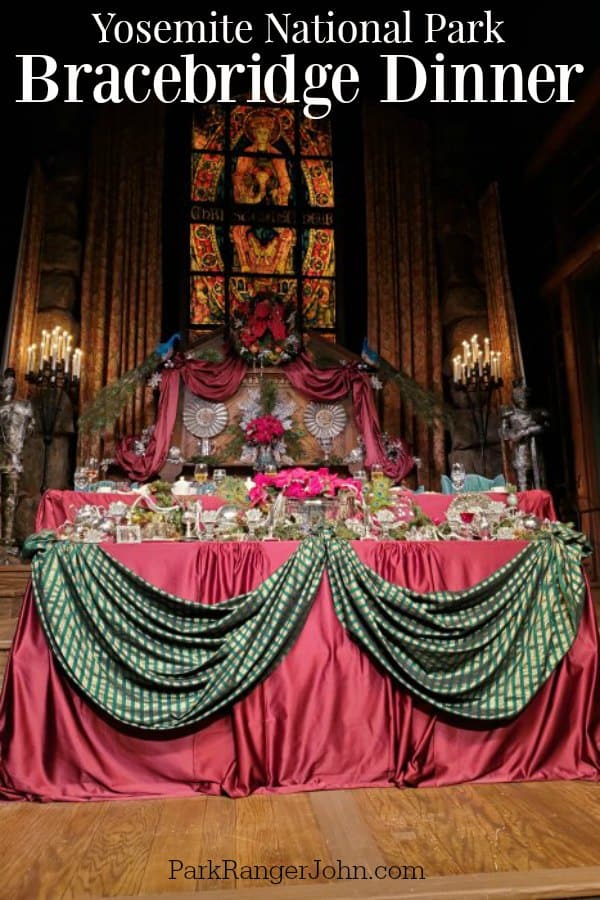 The first Bracebridge Dinner was held in December of 1927.  The Ahwahnee Hotel had just opened in July and Yosemite Park and Curry Company President, Donald Tresidder, envisioned a Yuletide celebration in the hotel’s dining room. Little did he know that this would become a true Christmas Tradition in Yosemite known worldwide.

Tresidder then asked Ansel Adams, a two-year actor as the “Lord of Misrule” of the event to rework the play. Adams went on to create the basic form of the pageant as we know it today. His original script of the “new” Bracebridge Dinner has remained largely intact since that initial performance in 1929.

Ansel Adams and The Bracebridge Dinner

1927 was a particularly good year for the young 25-year-old San Francisco native and photographer Ansel Adams. He had taken one of his most famous photographs “Monolith, The Face of Half Dome” and was the first director and performer as one of the main characters (the Jester) of the first-ever Bracebridge Dinner.

Most people today just know Adams as the famous photographer as he took many iconic black and white photographs that brought national attention to Yosemite National Park. Adams was an advocate of “pure” photography favoring sharp focus and the use of the full tonal range of a photograph.

Today you can see many of his works at the Ansel Adams Gallery in Yosemite Valley right next to the visitor center. What you may not know about Adams is that his early passion was playing the piano and he almost quit photography to become a classical musician. 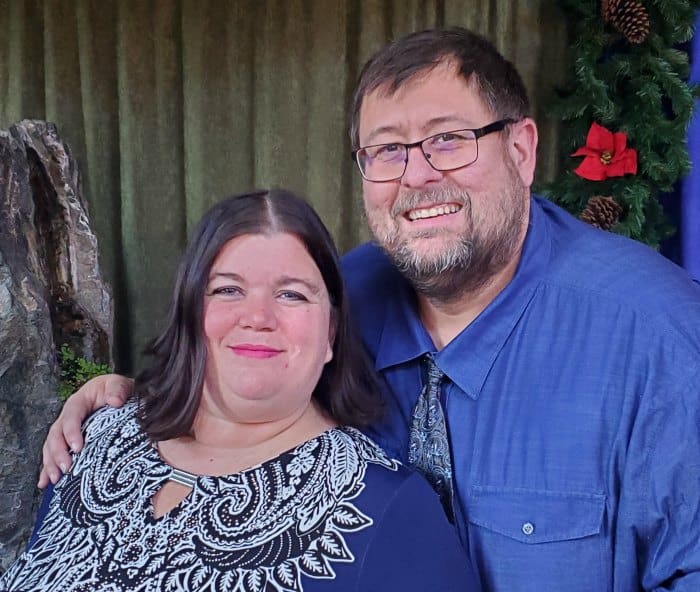 The dress code for the Bracebridge Dinner states: If you ever wanted to dress formally, Christmas at Bracebridge Hall is the time to do so. Many men wear tuxedos, while women often dress in formal gowns.

At a minimum, we recommend a dark suit or a fancy cocktail dress. Squire Bracebridge requests that you not come in costume to the Bracebridge Dinner.

The reality is that you should prepare to wear something super nice! I would say that the majority of men did wear a tuxedo and the women were looking pretty magnificent as well!

Don’t plan on wearing the minimum unless you just really like feeling out of place. The best part is that you can get photos before the event and have them shipped directly to your house. 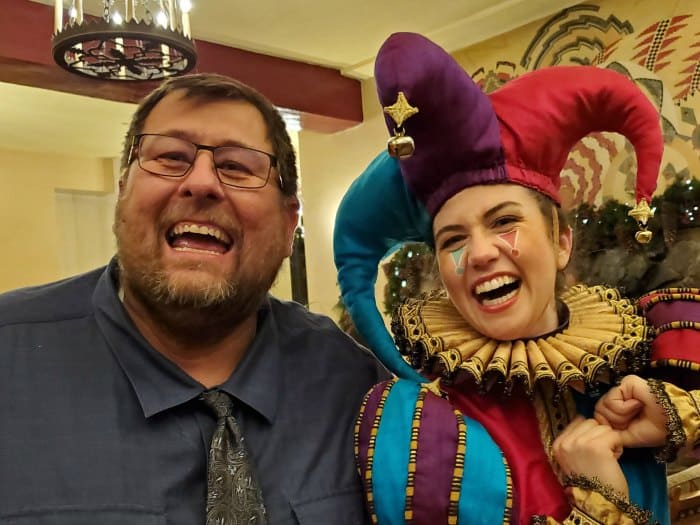 The show is not recommended for children under 10 years of age as the dinner is four hours in length.

Gratuities are included in the price of your ticket however if you choose to add wine or a cocktail this will be additional costs and gratuities are not included.

When purchasing your Bracebridge tickets, you have the option to package your deal with a hotel reservation at the Ahwahnee or the Yosemite Valley Lodge.

Do I need to apply for a lottery to get tickets to the Bracebridge Dinner?

Up until 2002, there were only 2,000 spots for each year’s Bracebridge Dinner. and tickets to the performance were distributed by lottery. There were as many as 60,000 people annually applying for 2,000 available spots.

The Bracebridge Dinner has now expanded to allow open ticketing, and audiences have filled the 350 available seats each night! Make sure to get your tickets early as this is still a very popular event and hotels fill up fast in the Yosemite Valley. 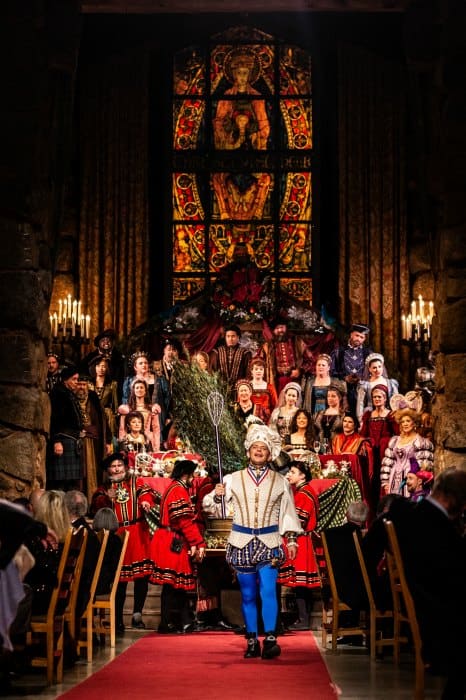 What to expect on the day of Bracebridge Dinner

Register for your Bracebridge Seating Tickets

Go to the Mural Room in the Ahwahnee Hotel beginning at 12:00 PM to pick up your seating tickets for the Bracebridge Dinner

The History of Bracebridge Talk

Meet in the Winter Club Room in the Ahwahnee Hotel and get the inside history of one of Yosemite’s most famous traditions and explore one of the National Park’s most famous Hotels filled with Christmas decorations.

Portraits will be taken in the Solarium Room in the Ahwahnee Hotel on the far end of the Great Lounge beginning at 2:30 p.m. and concluding at 5:00 p.m. They are taken on a first-come, first-serve basis.

We arrived early and did not have to wait in a long line and were able to enjoy our photo session with our photographer who even had time to take pictures with our phones. Do not expect to get this service if you wait later in the afternoon when the majority of the guests show up.

The Great lounge in the Ahwahnee Hotel is a beautiful place to relax before the show. Approximately an hour before the show pamphlets with Christmas Carols are passed out to guests to sing along and get into the Christmas Cheer before Bracebridge Dinner Begins. 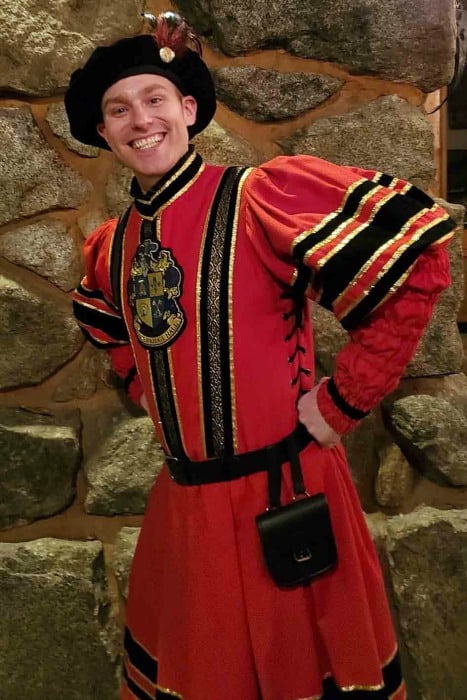 You will notice that people will start lining up somewhere between 15-30 minutes before Bracebridge Dinner Begins. This is because you sit at a round table and seating is first to come- first served. This can be very important as you will not want your back to the performance.

The majority of the show is at the front of the Dining hall and the center aisle as each item is presented for the feast.

Make sure to take in the moment walking into the dining hall all lit with candlelight! I absolutely loved the attention to detail! Everything from the candle holders on the dining room tables to the props like the Peacock Pie are the original ones used from the first Bracebridge Dinner.

The best way to describe the Bracebridge Dinner is that it is a Seven Course Meal with an English charm of theater and music.

I was immediately drawn in and before you realize, four hours have passed and the show was over. It is something that I would happily do again and something I will tell people about for years to come! 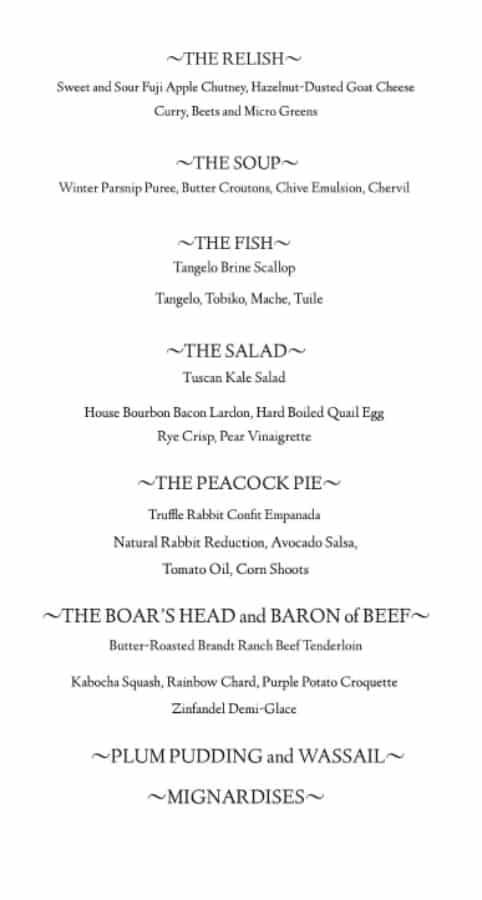 The Bracebridge Dinner menu can change from year to year but it always has the same titles for each of its seven courses.  You may ask why? The answer is simple, they use the same props from the very first Bracebridge dinner in 1927!

I personally appreciated how well they managed dietary restrictions as I can’t have nuts and my wife is vegetarian. We simply handed our server our dietary needs and they took care of the rest. I have to say that the presentation was wonderful and the food was absolutely fantastic! The evening was topped off with a magical plum pudding! 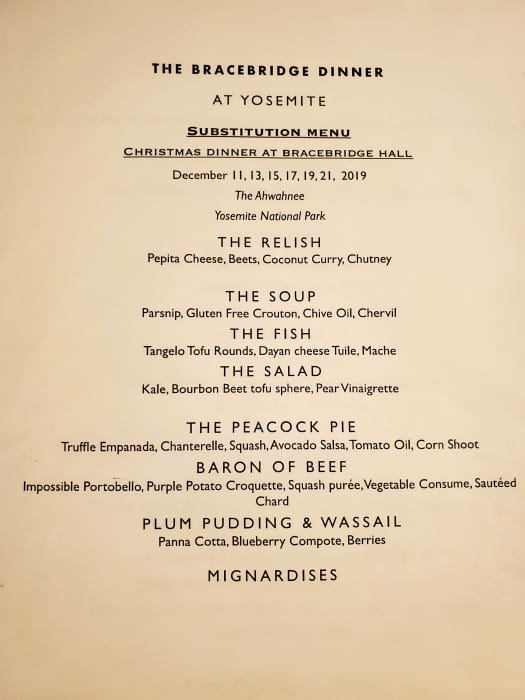 Here is a look at the dietary restriction menu. They are able to truly adapt the menu to fit dietary needs including no soy, nuts, dairy, eggs, meat, and wheat. 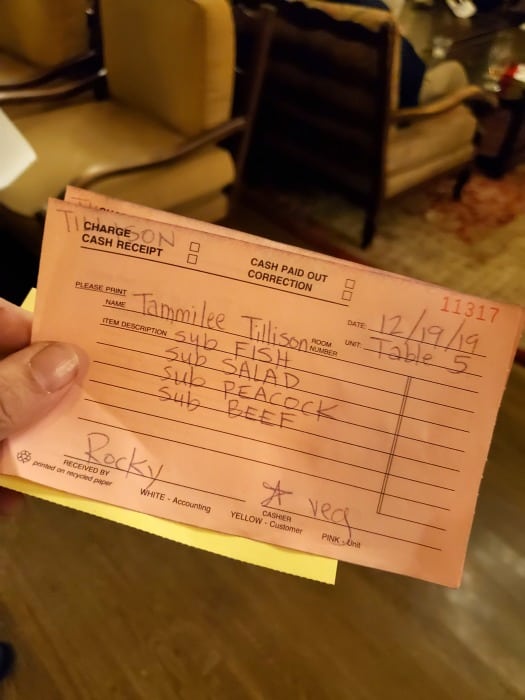 You are given this ticket that sits next to your plate detailing your dietary restrictions. The servers do a great job working off of the list and making sure your food comes at the same time as other guest’s food. 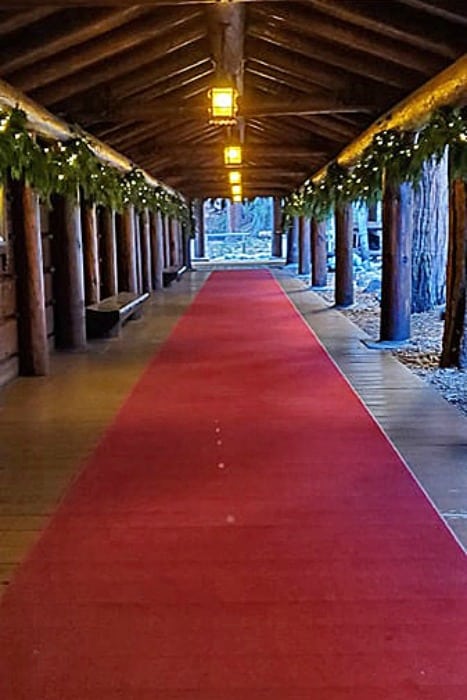 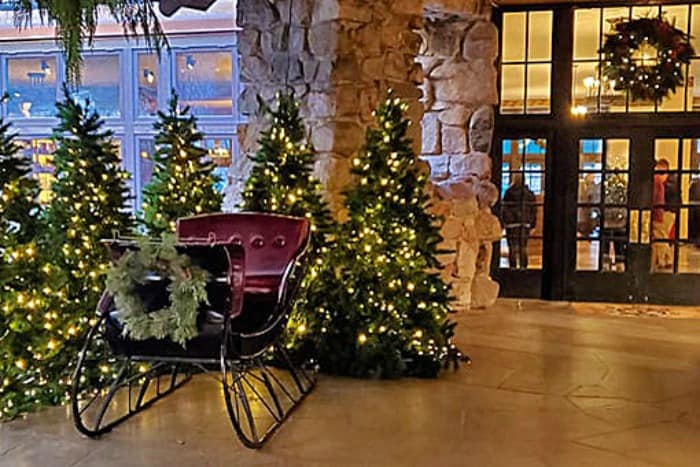 Where to stay In Yosemite during Bracebridge Dinner

You have numerous lodging and camping options during the Bracebridge Dinner. 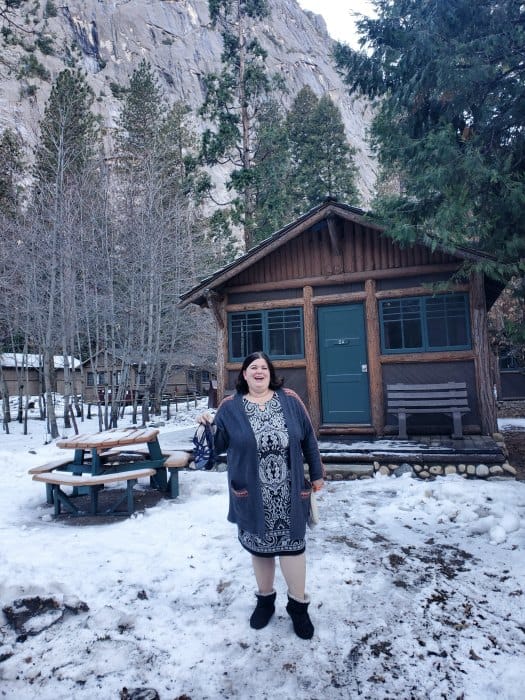 Curry Village has beautifully decorated Cabins with a bath, the Stoneman Cottage and heated canvas tents available for rent in the winter. We decided to stay in the extremely popular cabins at Curry Village and loved our stay here. The cabins are very well decorated and we found it to be very peaceful. You may find yourself walking through snow to get to your cabin and could be a problem for some who are dressed up for the event.

Be prepared to wear your snow boots or non-dress shoes to the car before heading to the Ahwahnee. My wife had a great time laughing as she walked in snow boots and a formal dress.

If you are celebrating a special event or just wanting to make this trip something special then I would suggest a stay at Chateau du Sureau in Oakhurst, California. Located approximately an hour and a half from the Ahwahnee Hotel, the Chateau is a 5 Diamond luxury at its finest with breathtaking rooms, an incredible restaurant, and a spa to melt all your stress away. A stay here would cap off an ultimate weekend of luxury and pageantry with the Bracebridge Dinner.

I hope this article inspires several people to experience the Bracebridge Dinner. It is a truly magical event that happens each December at Yosemite National Park.