The Ahwahnee Hotel is located in Yosemite Valley and is known throughout the world as one of the most luxurious National Park Lodges.

This National Historic Landmark has seen numerous celebrities and presidents walk through its doors, been in movies like The Shining and is home to America's best known Christmas Dinner, the Bracebridge Dinner. 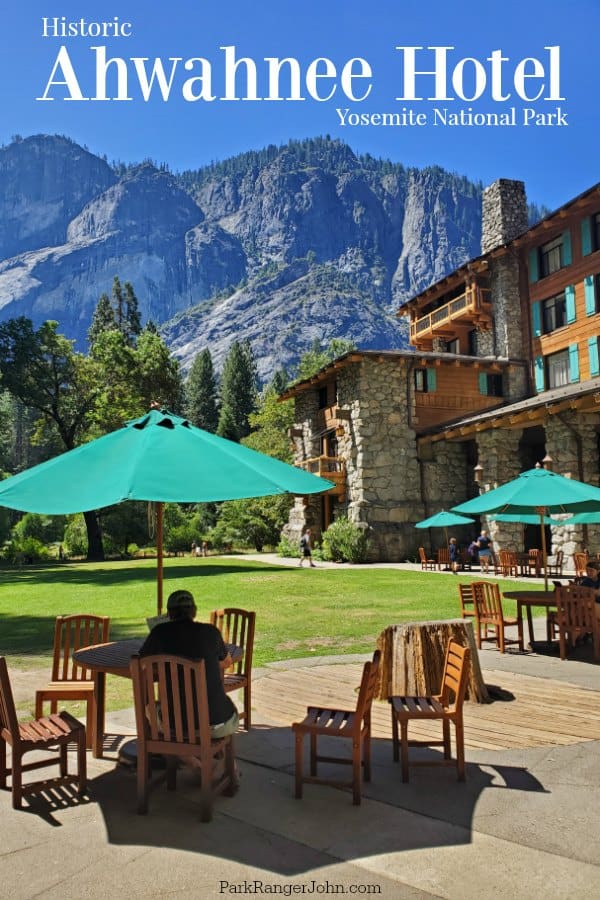 He wanted to upgrade Yosemite's concessions and accommodations. He wanted a hotel built that would attract guests and be open year-round. Gilbert Stanly Underwood was chosen as the architect in July of 1925.

Gilbert Underwood also designed two other highly recognized National Park Lodges in Southern Utah, the Bryce Canyon Lodge, and the Zion Canyon Lodge. The initial plans for the hotel consisted of a central tower seven stories high with three wings extending from it. 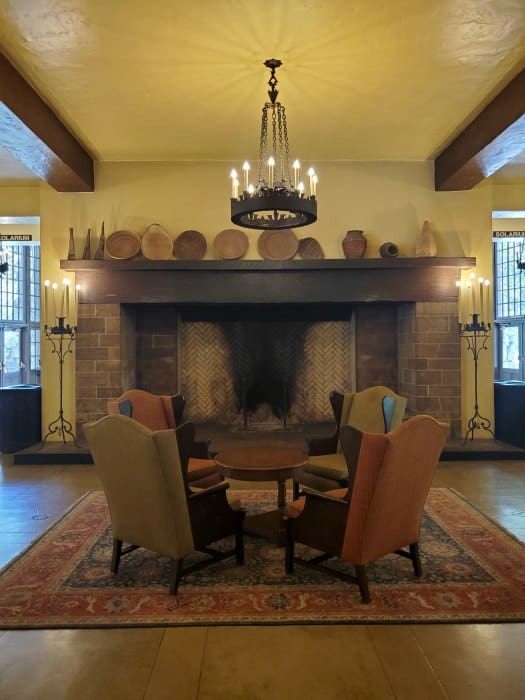 To reduce the hotel's vulnerability to fires there was very little wood used in construction. The primary building materials consisted of steel, granite, and concrete. The exterior would be granite and concrete that was stained to look like Redwoods.

The project was approved in March 1926 by Stephen Mather. A contractor was hired who proposed building the hotel for a maximum cost of $525,000 including construction fees by December 15, 1926. The cornerstone was laid for the hotel on August 1, 1926.

All of the building materials had to be trucked into Yosemite National Park. None of the park's natural resources could be used to build the hotel. 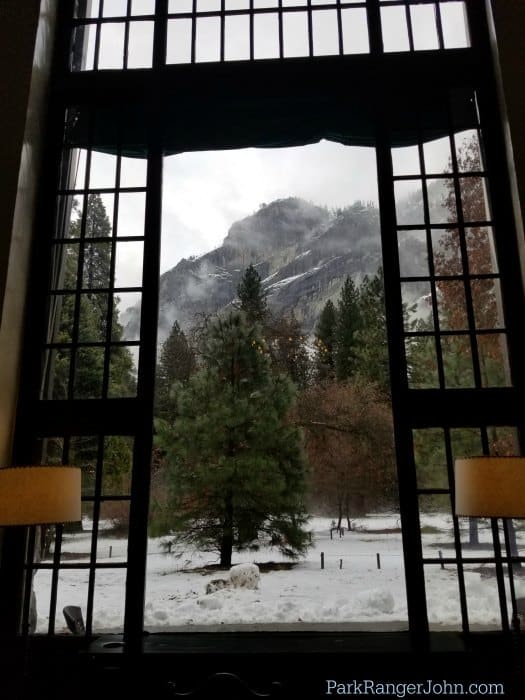 As the building was being constructed it was not without issues. Additional square footage was added causing the price to climb to one million dollars and caused the project to be seven months behind schedule.

On October 12, 1926, The Ahwahnee was finally named. The name Ahwahnee was chosen by Yosemite Valley's first residents, the Ahwahneechee people, and translates to "place of large gaping mount".

The grand opening of The Ahwahnee was set for July 16, 1927, with a final price tag of 1.25 million to build the majestic hotel. Right before the hotel was due to open hotel employees realized they could smell the strong fumes coming off of trucks at the main entrance. They had to quickly construct a covered walkway and timber porte-cochere before the grand opening. 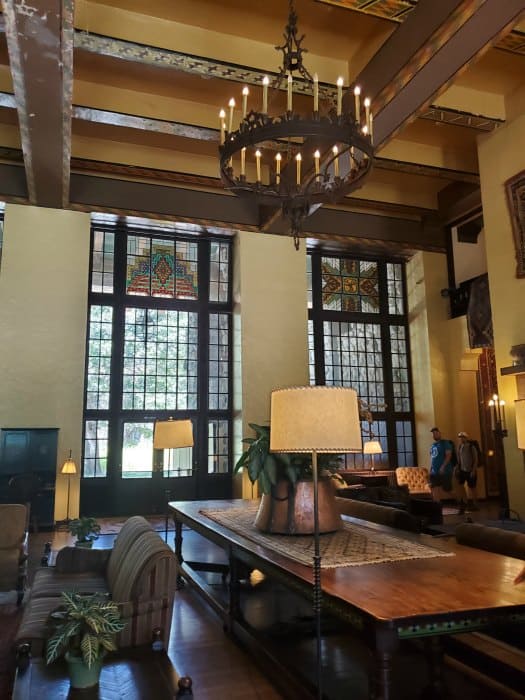 During World War II the Ahwahnee was used as a rest and relaxation hospital for naval personnel. The great lounge housed 350 men as a dormitory. Over a span of 2.5 years 90,000 servicemen and women relaxed at the hotel.

The original large oak tables, secretaries, and wrought iron chandeliers in the Great Lounge can still be found today. You can see the original hotel rugs now hanging on the wall. 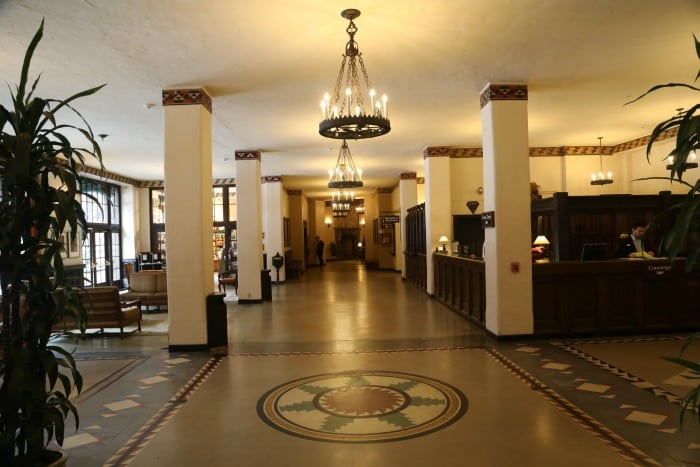 Why did the National Park Service Change the Ahwahnee Hotel's name to The Majestic Yosemite Hotel?

On March 1, 2016, Aramark took over running the Ahwahnee hotel. The hotel's name was changed from The Ahwahnee to The Majestic Yosemite Hotel due to an ongoing trademark dispute with the previous concessionaire Delaware North Inc. who lost the bid in 2014.

On July 15, 2019,  the announcement was made that the ongoing trademark legal dispute was settled and the familiar names like Ahwahnee, Curry Village, and Wawona were restored back into Yosemite National Park. 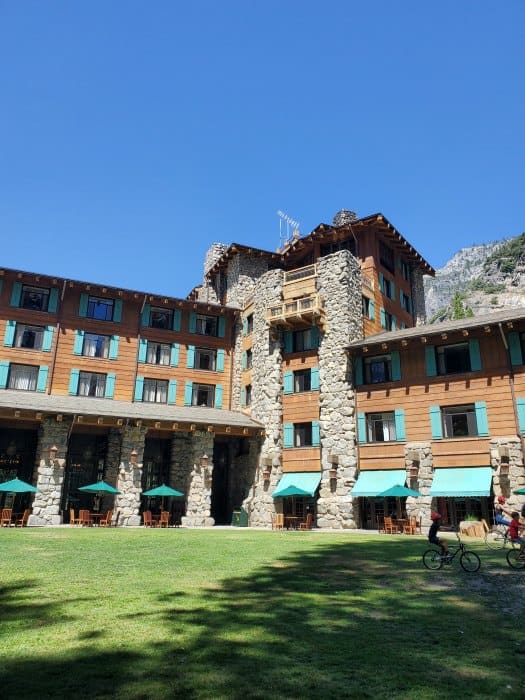 The Ahwahnee Hotel is a stunning example of Parkitecture

You may be asking yourself, what is Parkitecture?

The Ahwahnee is one of four National Park Hotels to receive the Class 1 (Criterion) rating from the National Park Lodge Architecture Society including the  El Tovar, Old Faithful Lodge, and Crater Lake Lodge. These magnificent structures should be on any park visitor's list of things to see and do in a National Park as they are breathtakingly beautiful and full of grandeur. 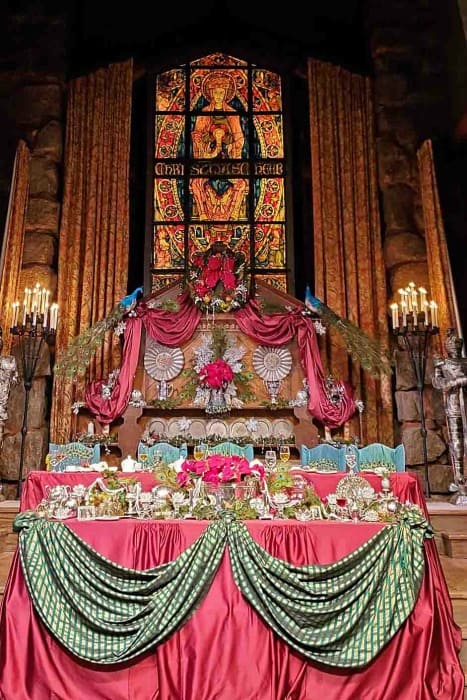 Every December since the hotel's opening in 1927, The Ahwahnee Dining Room takes on the air of eighteenth-century England. The tables are lit by candlelight as guests are treated to a spectacular seven-course meal and perhaps the most celebrated Christmas Pageant in the United States.

The first two seasons starred Ansel Adams as the Lord of Misrule (Jester) before rewriting the play and playing different roles within the play. 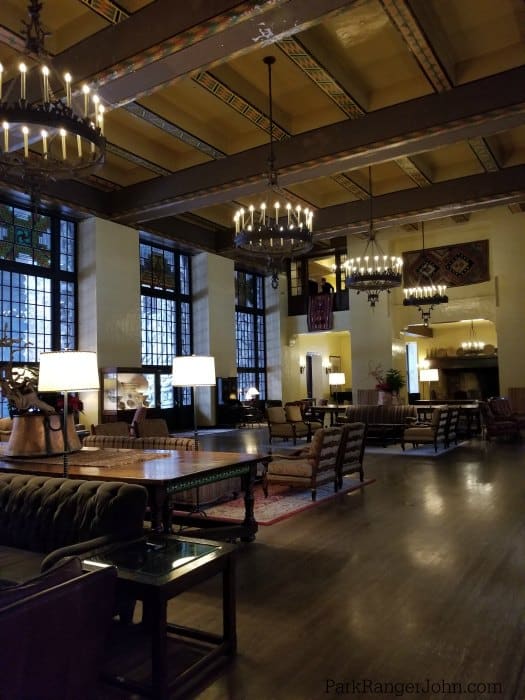 Room Types at The Ahwahnee

There are a few things to remember when staying in one of these historic hotels.

First off, these rooms were built in the 1920s and reflect what luxury was during that time, not 2020 luxury. 1920's luxury was seen more in the common areas where people socialized, had beautiful meals prepared for them, and enjoyed the lodge itself.

The room was merely a place to sleep and change clothes so don't be surprised to hear the plumbing rattle and beds and showers much smaller than today's standards. Technology is always a concern as we have become so accustomed to watching T.V. being on our phones and having the ability to search the internet for all of our questions and needs.

Don't expect wifi access, televisions with cable channels, etc., just take a look out your window, nature is providing one of the most picturesque places on earth just outside your room!

If you want something a little more modern but really want to be in the main part of the park, check out the hotel cottages. These rooms are thoroughly updated, roomy, and just all-around exquisite.

Room classifications in the Ahwahnee Hotel include: 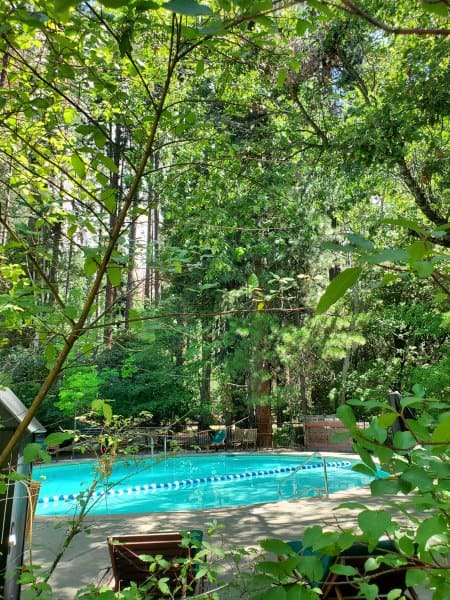 The outdoor pool is heated and can be enjoyed year-round. It is gorgeous during Yosemite winter months when the pool is surrounded by snow and you can see the steam coming off the pool. 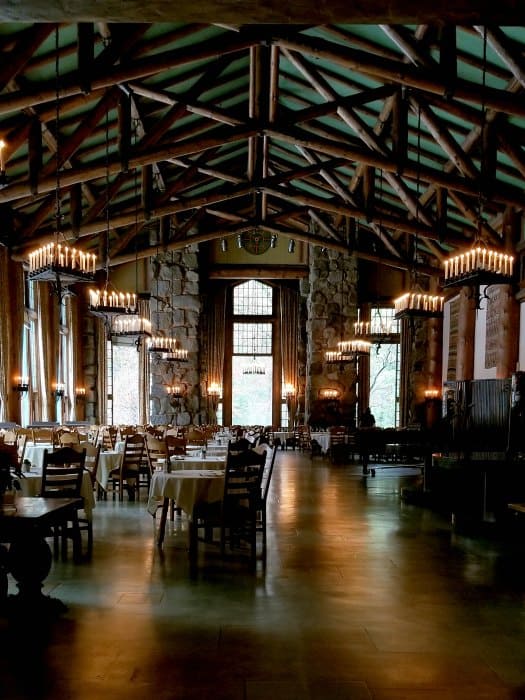 Dinner served 5:30 PM-8:30 PM. Men are required to wear long pants and a shirt with a collar and women wear a dress, skirt, or long pants with a blouse. Children over age 4 are also kindly asked to dress for the occasion as well.

The dining room is a place that needs to be seen to fully appreciate its grandeur. The ceiling is a staggering 34 feet above the floor with massive trusses. There are wrought-iron craftsman style chandeliers and the stained glass is absolutely breathtaking! 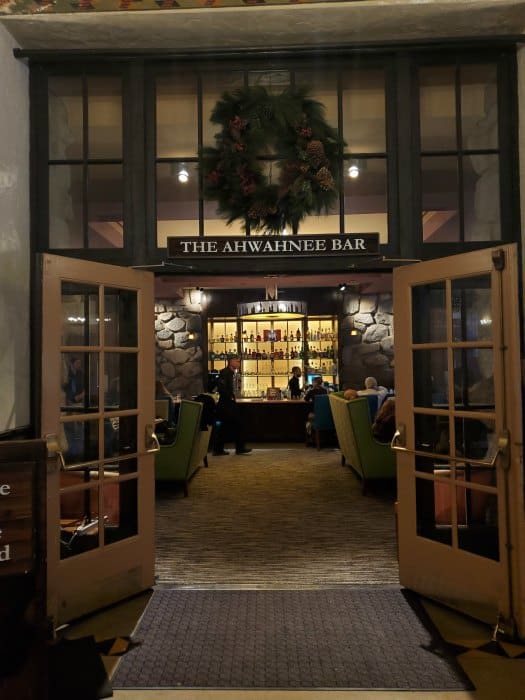 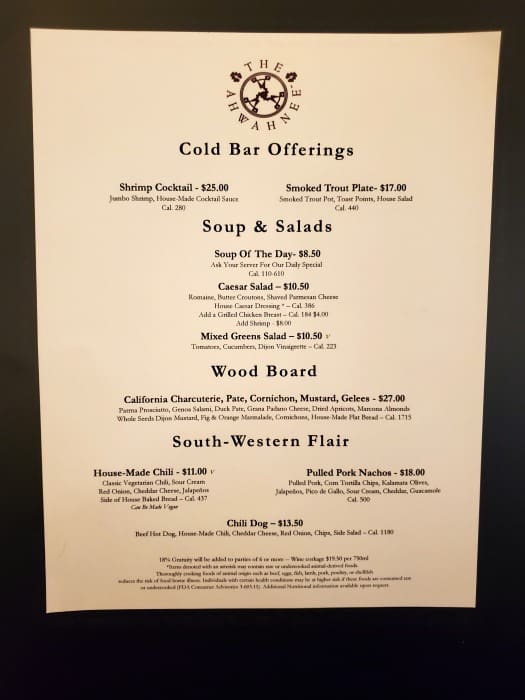 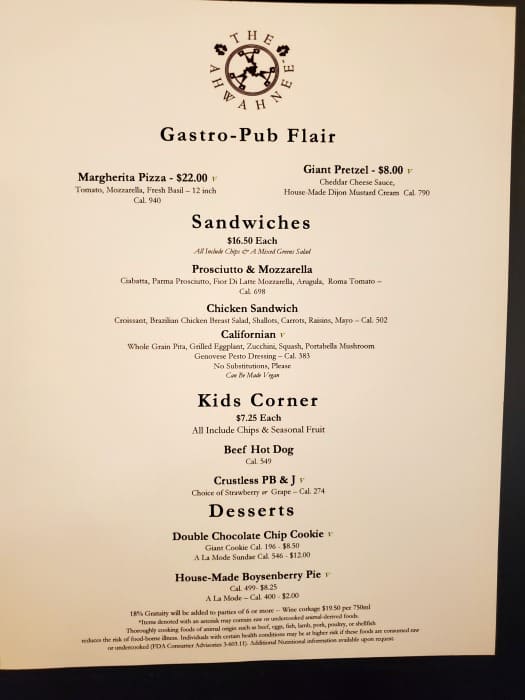 Here is a look at the Ahwahnee Bar Gastro-Pub Flair menu. 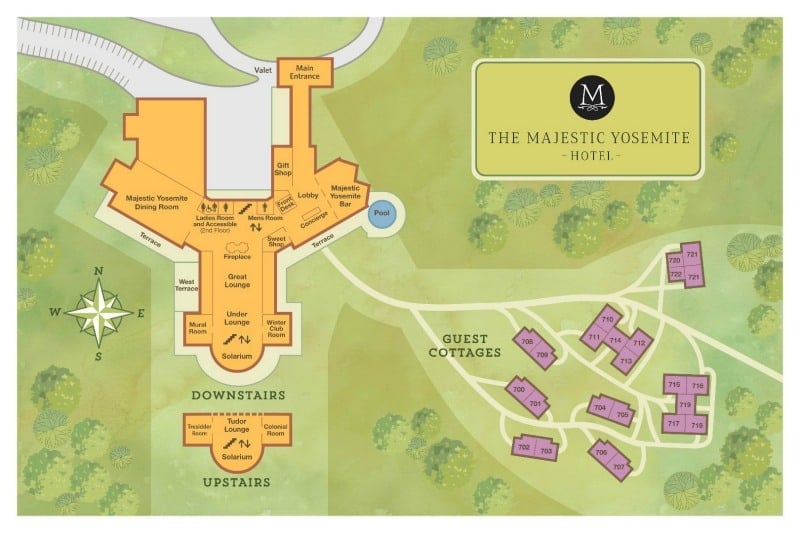 Deposit - A deposit of 100% of the first night at the time of booking if paid by credit or debit card.

Cancellation Policy - Cancellations or changes in reservations must be received 7 days prior to reservation arrival date to assure refund of deposit.

Pets - There are no pets allowed on the property.

Sierra Vista Scenic Byway - Take a day and travel the road less traveled! Escape the crowds and see parts of the Sierra Nevada mountains you haven't seen before.