The Crater Lake Lodge is located in Southeast Oregon and is one of the top lodges in the National Park System!

Those lucky enough to stay here have the opportunity to experience all that Crater Lake has to offer with sweeping views overlooking the lake, the lake lodge dining room, and fantastic examples of National Park "Parkitecture" in this amazing lodge. 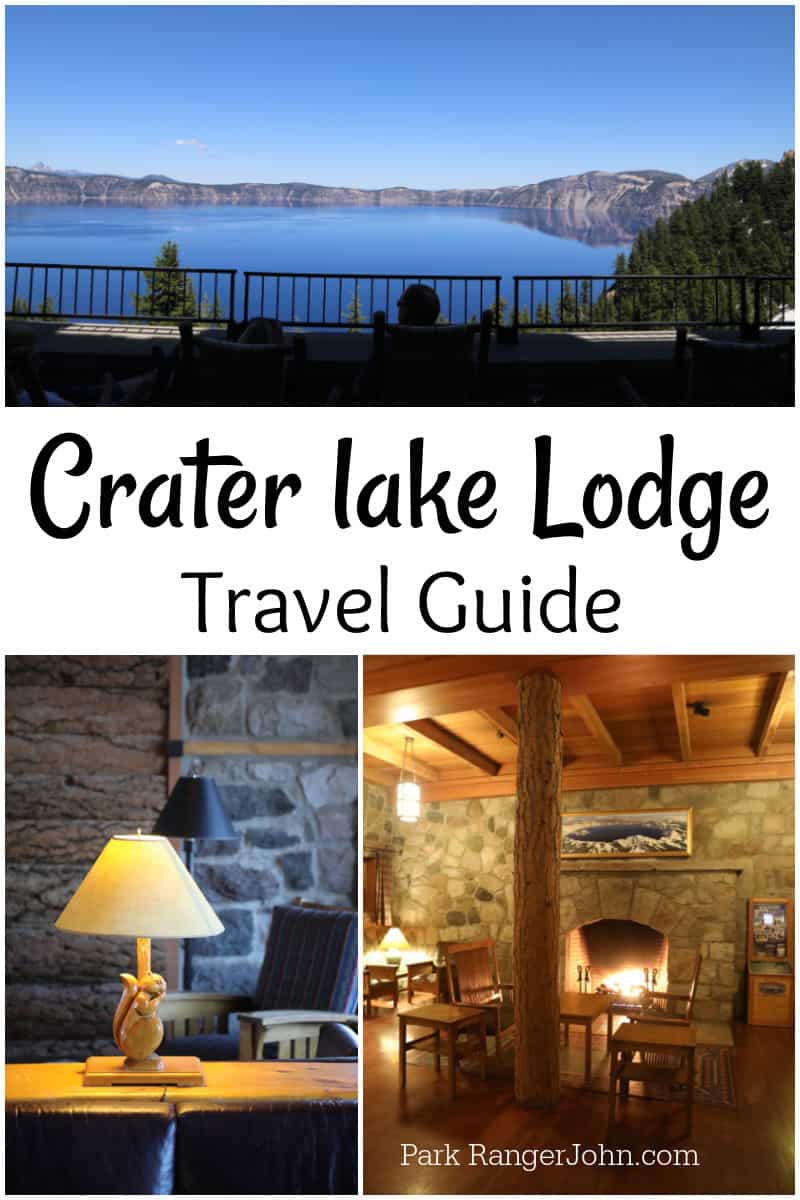 The name says it all! Its perfect placement at the lake's edge gives visitors sweeping views of the deep blue water of Crater Lake surrounded by tall cliffs that become covered in snow for several months each year.

This is one of the Historic Hotels of America, a title that has only been given to six hotels in all of Oregon. The combination of the National Park Rustic design and jaw-dropping views will leave you wanting to come back again and again.

Crater Lake Lodge originally opened in 1915 and sits on the edge of Crater Lake. There are 71 guestrooms within the lodge. You can’t help but stand in awe of the grand fireplace in the Great Hall.

There are 71 comfortable guestrooms with a rustic atmosphere reminiscent of the original 1920’s era lodge.

The lodge is located in Southern Oregon on the crest of the Cascade Mountain Range. 110 miles from the California Border. The closest airport is Rogue Valley International Medford Airport 83 miles away.

During his presidency, Theodore Roosevelt designated five National Parks.  His very first was Crater Lake in Oregon, created in 1902.

One person who was extremely satisfied with this designation was William Gladstone Steel.  Steel was an American journalist who had been fighting for seventeen years to ensure that the breathtaking area in and around Crater Lake was protected for centuries to come.

Crater Lake was not just a large, beautiful lake in Oregon that Teddy Roosevelt felt akin to.  At 1,943 feet, it is the deepest lake in America.

Because there are no water sources emptying into the lake, it retains its magnificent blue color and purity due to the fact that it is supplied solely by snow and rain.  According to the National Park Service, it is the cleanest and clearest large body of water in the world.

7,770 years ago the Native Americans in what is now Oregon would have witnessed the creation of the lake after what was called Mount Mazama, a 12,000-foot volcano erupted and collapsed.  Mount Mazama was an important figure to the native people in the area.

Once Crater Lake was made a National Park, Steel wasted no time in campaigning for a lodge to be built near its grandeur.  He wanted outdoor lovers to have a place to stay for a longer period of time while visiting the park.

Steel eventually partnered with a man named Alfred Parkhurst, a real-estate developer from Portland.  They hired the architectural firm R.L. Hockenberry to complete the blueprints.

Everyone involved agreed that the main goal for the building was to use materials that would withstand the elements for many years to come.

They also knew they wanted majestic elements added that would live up to the magnificence of the towering mountains and pristine lake that surrounded it.  Stones were added to create a look similar to that of New York’s Adirondack Mountain resorts which were largely popular at the time as well.

When the lodge opened in 1915, it quickly became the most popular tourist attraction in the area.  Not surprisingly, the Great Depression greatly affected business at the lodge.

In addition, very little money was able to be spent on lodge maintenance and upkeep.  Crater Lake Lodge soon fell into a long-term season of desolateness and then decay.

During the 1930s, the Civilian Conservation Corps added beauty to the exterior by planting hundreds of indigenous trees and shrubs that helped blend the overall area of the lodge into its surroundings.

Later, the National Park Service paved the lodge’s parking lot which decreased dust and helped diminish erosion issues around the exterior.  Although the park and lodge were closed during World War II, from July 1942- June 1946, business boomed once again after the war ended.

The National Park Service was continually requesting that the lodge operators spend more money to take better care of the building, but little to nothing was done.

In 1967, the lodge was finally acquired by the National Park Service.  By 1988, the lodge had major safety concerns and had to be closed.

The Park Service’s plan was to completely demolish the building and start fresh.  This was not taken happily by citizens, and it was finally decided that instead, the lodge would undergo a massively extensive renovation.

A new foundation, roof frame, and concrete and steel structure were built.  They were able to use original exterior and fireplace stones.

The Crater Lake Lodge was completed in the fall of 1994 after the $15 million renovations were finished.

The small guestrooms decreased from 150 to 71 rooms.  This gave designers the luxury of making each room unique and exquisite.  Some have views of Crater Lake and Garfield Peak, others of the meadow near the lake.

One room on the fourth floor boasts a fantastic claw-foot tub which you can enjoy while gazing at the lake below.

The lodge was officially reopened on May 20, 1995, too eager visitors and park-goers who appreciated the grandiose site with its nostalgic 1920s feel and peaceful atmosphere.

This renovation brought the lodge up to safety standards and was built to last the harsh winters of Crater Lake.

The Crater Lake Lodge was named to the National Register of Historic Places in 1981.

It also fit the needs of a Classic "Criterion" Classification 1 Lodge under National Park Service Standards and will serve the public for years to come. 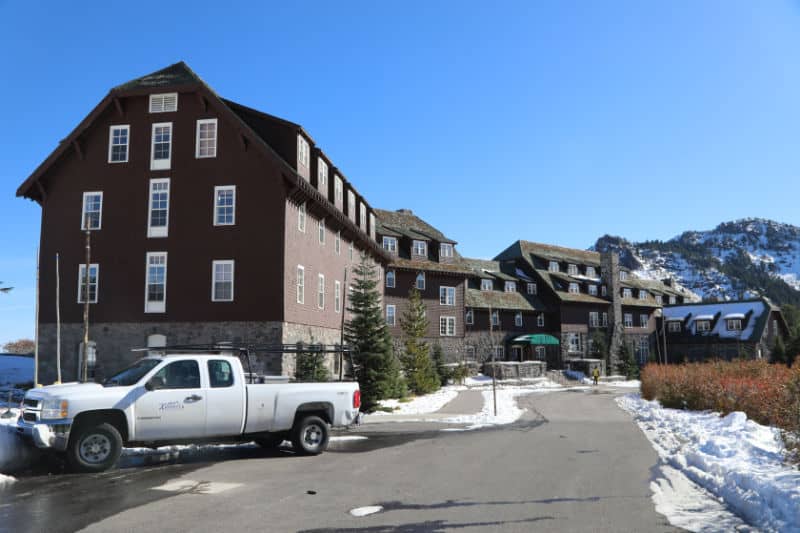 The lodge is open from Mid-May through Mid-October.

There are 71 rooms available, six are ADA Accessible. Do not expect to walk in and get a room, most rooms are booked out a year in advance!

This is a non-smoking only hotel

Parking is available on site.

Ranger Programs are available in the lodge, check inside the lodge for details.

WIFI: There is wireless internet available for guests but expect it to be extremely slow as everyone else is connected. I did manage to get some work done between 3 am -6 am when everyone else was asleep.

Pets: No pets are allowed in the lodge. 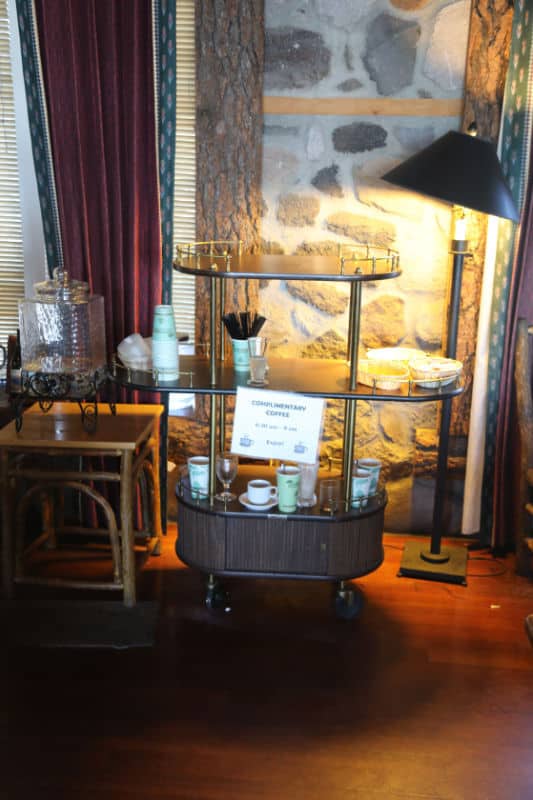 Reservations can be made up to 13 months in advance by calling (888)774-2728 or by going online and making a reservation.

You may also be able to make reservations through Expedia

There are no TVs, phones, pool, or air conditioning in the lodge. I only saw 2 available outlets in the room available for use.

There were complimentary toiletries and a hairdryer in the room and a small gift shop area as you come into the lodge.

Not all rooms have a shower and a tub. If you prefer a shower make sure to ask for one when making your reservation. There is no guarantee this will happen but they will do their best to accommodate you in your request.

If you are unable to get a room on your desired date make sure to check if they have room at Mazama Village as they have 40 rooms there and are located about 7 miles from the Crater Lake Lodge. 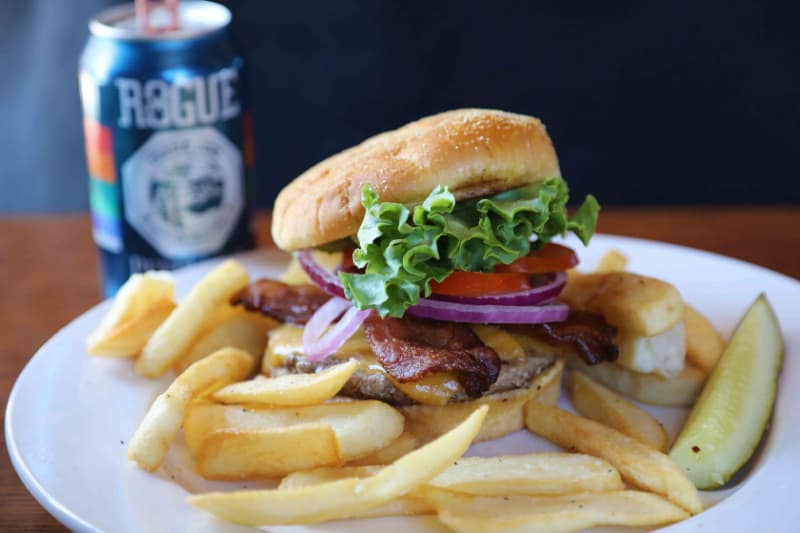 Crater Lake Lodge dining is open for breakfast, lunch, and dinner. Reservations are accepted for dinner only and can be made by calling (541)594-2255.

I thought the menu was inspiring and sounded incredible stating they serve choice Northwest Cuisine. I have eaten here a few times and have to say it was less than inspiring as our food came out cold every time.

I was much happier with In-N-Out I had in Medford before heading to the park. Having said this I would say that we had a really good breakfast.

I did enjoy the Crater Lake Benedict and the view of the lake for breakfast with coffee is fantastic! There is no bar in the lodge but you can order drinks in the great room and can get drinks in the restaurant.

One of my favorite things to do in Crater Lake is to enjoy a drink on the deck after a day of exploring the park. 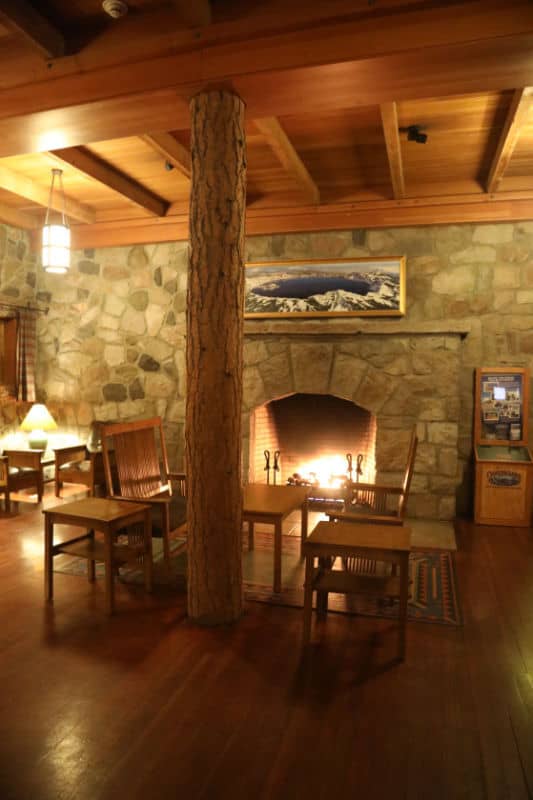 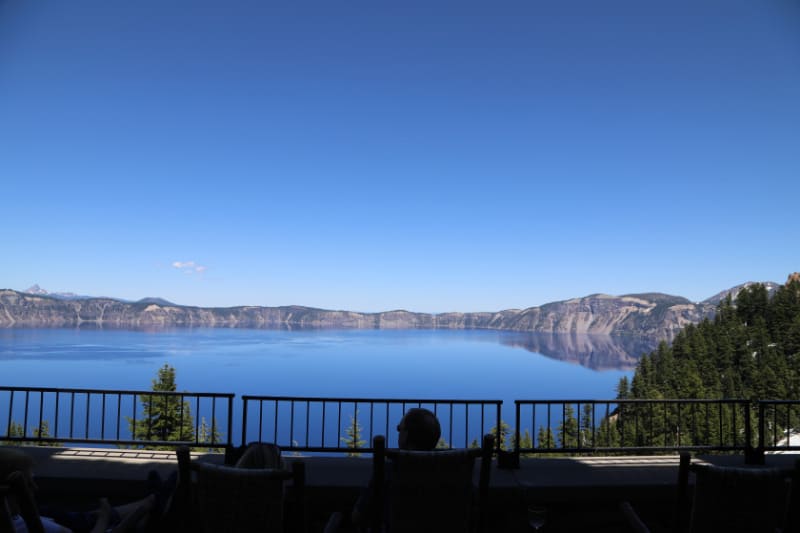 Why stay at Crater Lake Lodge

There are a couple of great reasons for staying at the Crater Lake Lodge.

This prestigious honor has only been given to four National Park Lodges and is considered an integral part of the park experience.

Here is a complete list of National Park Lodges.

The lodge's massive fireplaces were great for warming up, along with a warm beverage in the great room after spending a cool brisk October day in the park. We enjoyed the fireplaces even more after getting up super early to see the night sky and sunrise.

There was even free coffee in the great room in the morning!

The second reason to stay at the lodge is location, location, location! You will have awe-inspiring views of the deepest lake in the United States and its deep blue waters, you will be located near rim village, visitor center, hiking trails, and close to Discovery Point and its epic views of Wizard Island!

If that's not enough, just imagine yourself standing outside of the lodge at night looking out at Crater Lake. All you see endless stars and the moon as they light up the sky enough to see the 200-foot cliffs and the lake. If you get up early enough, you will possibly see one of the most epic sunrises of your life.

The magic starts early, close to an hour before sunrise as you get the first tones of red and yellow coming from the east side of the lake. The colors get gradually brighter until almost sunrise where the sky is already turning bright blue when the first rays of the sun peak over the cliffs of the lake. 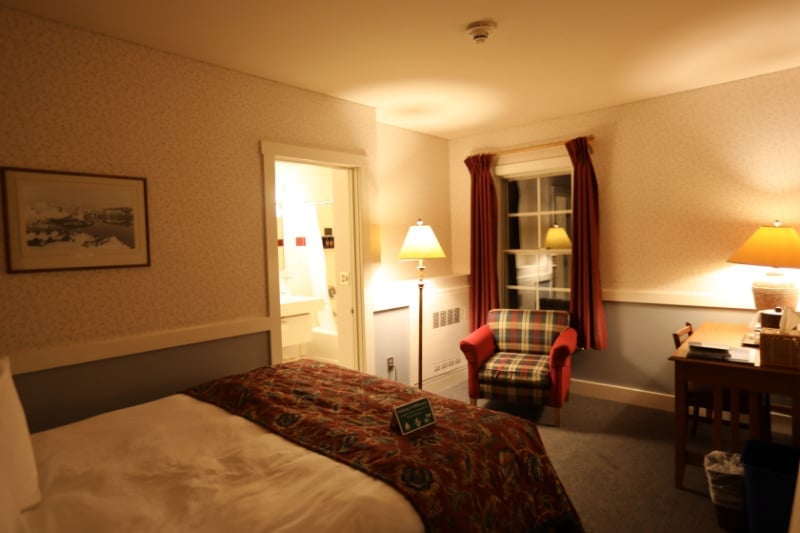 If you are unable to get a reservation at Crater Lake Lodge or are looking for a different type of lodging click on the map below to see current rates for hotels and vacation rentals near Crater Lake NP. 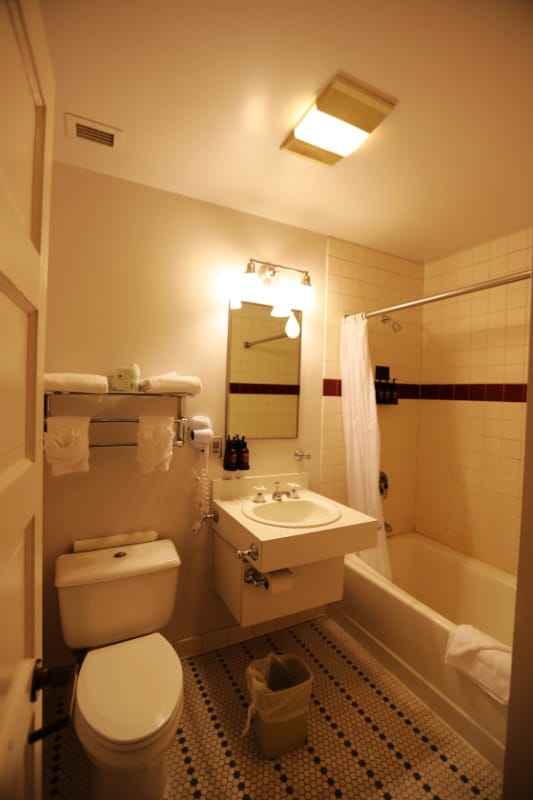