Fort Scott National Historic Site is located in eastern Kansas. The park protects a US Army Post that was the center of Western expansion. 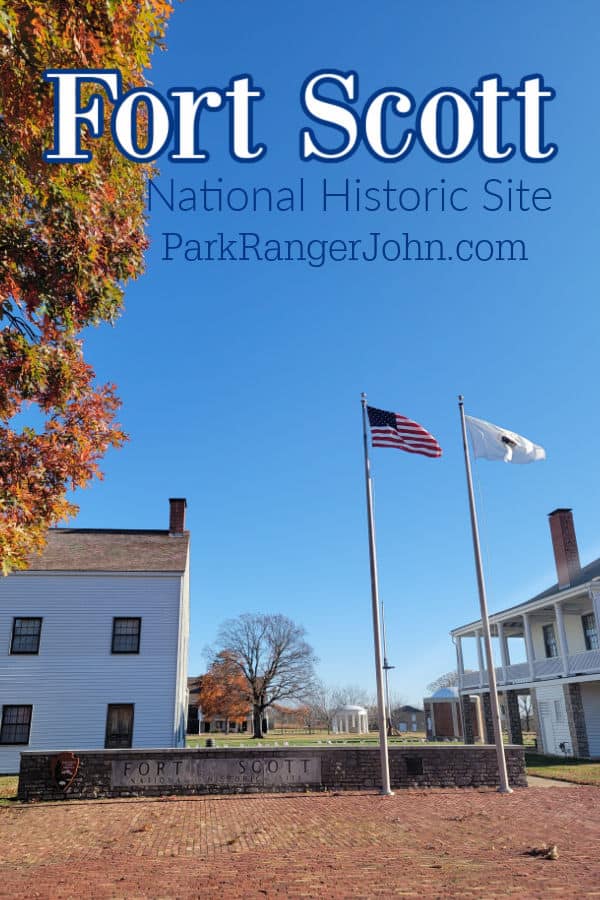 Fort Scott was established in 1842 during the time when many Native American tribes were being relocated from their lands (Trail of Tears). The fort was built to prevent conflict between Native tribes and white settlers.

Soldiers from the fort protected immigrants headed west on the Sante Fe and other trails. 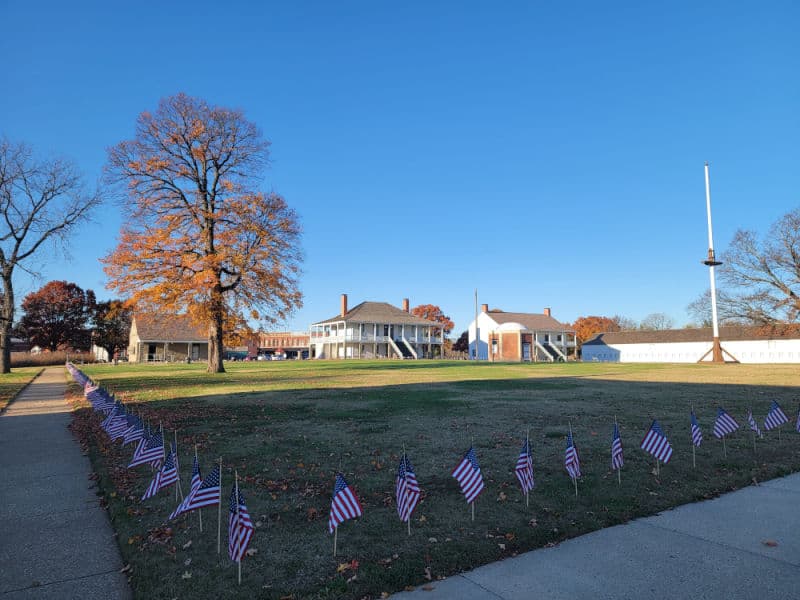 Fort Scott never came under attack while it was used as a US Army Post. The fort was abandoned in 1853.

During the Civil War, the fort went back to being a military holding with the Union Army occupying multiple buildings starting in 1861.

During the Civil War, the fort served as a vital supply depot for Union forces along with being a military hospital and a prison.

It was once again abandoned in 1865 only to return to service again in 1870 when soldiers were assigned to protect railroad workers laying track in the region.

This was one of the few times in US history when the US Army used its weapons against American citizens.

The fort was again abandoned in 1873. 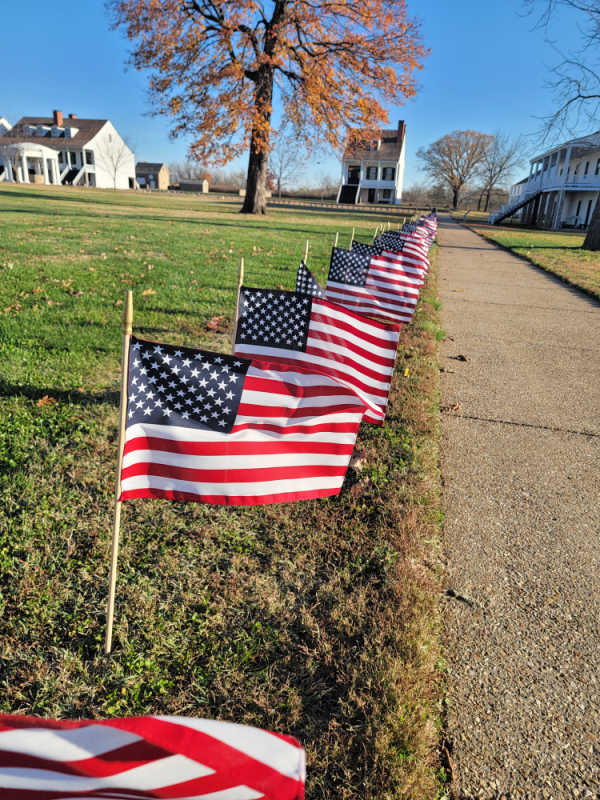 Visitors today can tour the grounds and see 11 buildings that are considered original including the hospital, officer's quarters, quartermaster's storehouse, bakehouse, and carriage houses. The buildings surround the parade grounds.

It is a fairly easy walk around the parade grounds to see each of the historic buildings. There are stairs to go into some of the buildings.

A few areas had uneven rock pathways that may be difficult if you have any knee problems. These areas were small and easy to move around.

Make sure to prepare for the sun, wind, and weather. There is no real shade while walking the parade grounds. It was super windy the morning we visited the park and it was chilly! 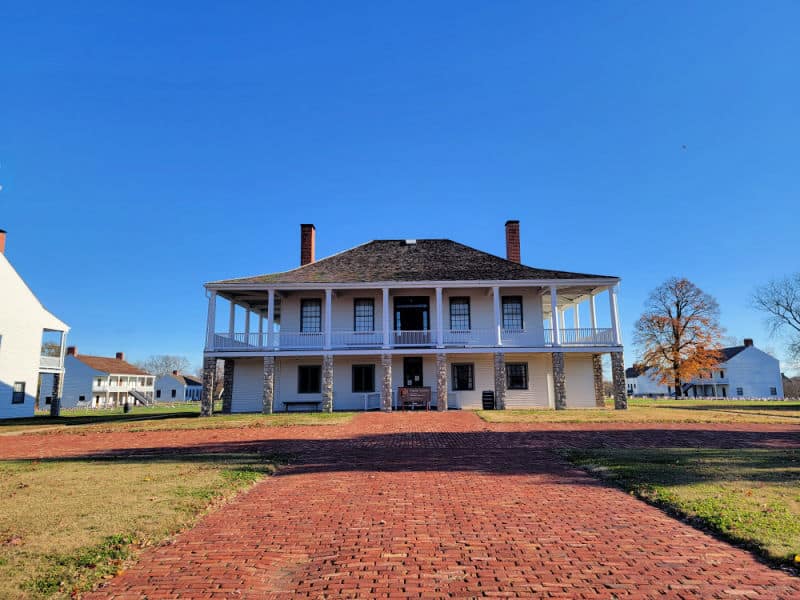 The visitor center is located in the historic Post Hotel on the fort.

There is an information desk, small store, and an area with the National Park Passport stamps.

You can also pick up and turn in your Junior Ranger program at the visitor center.

Fort Scott's movie Dreams and Dilemmas: Fort Scott and the Growth of a Nation can be viewed online prior to your visit.

You can find the park video here. 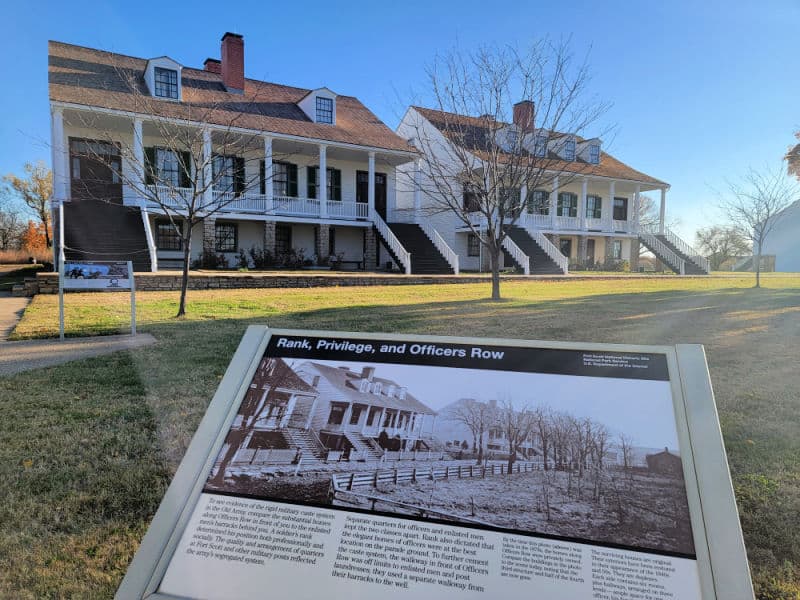 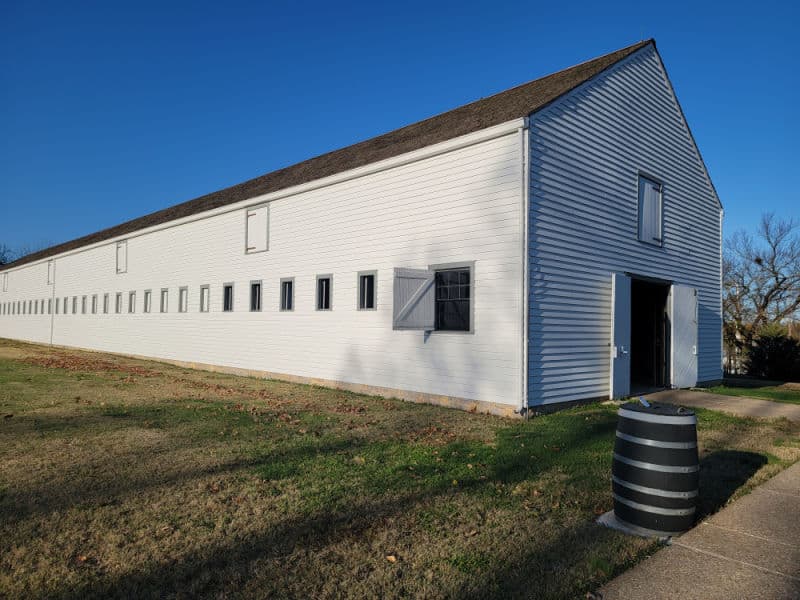 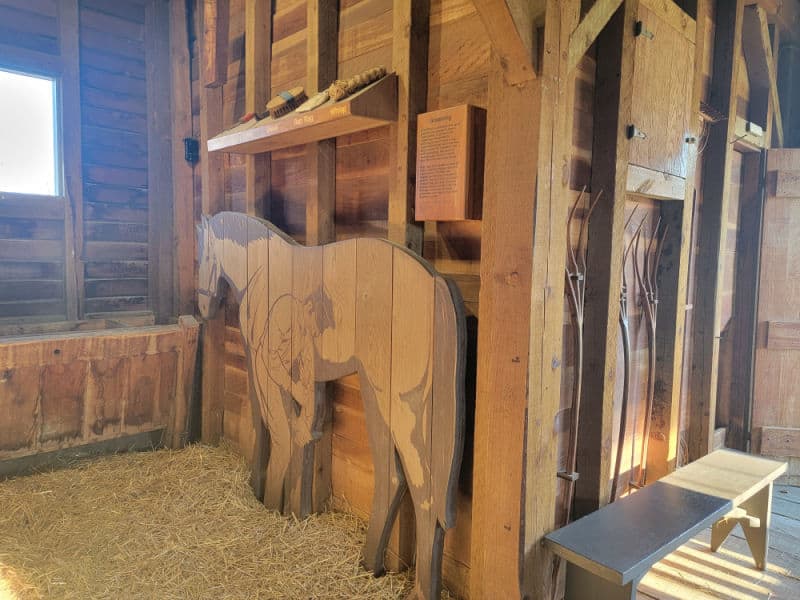 Daily guided tours leave from the Visitor Center at 10 am and 1 pm from May through September.

Other times of the year the guided tours depend on staffing. 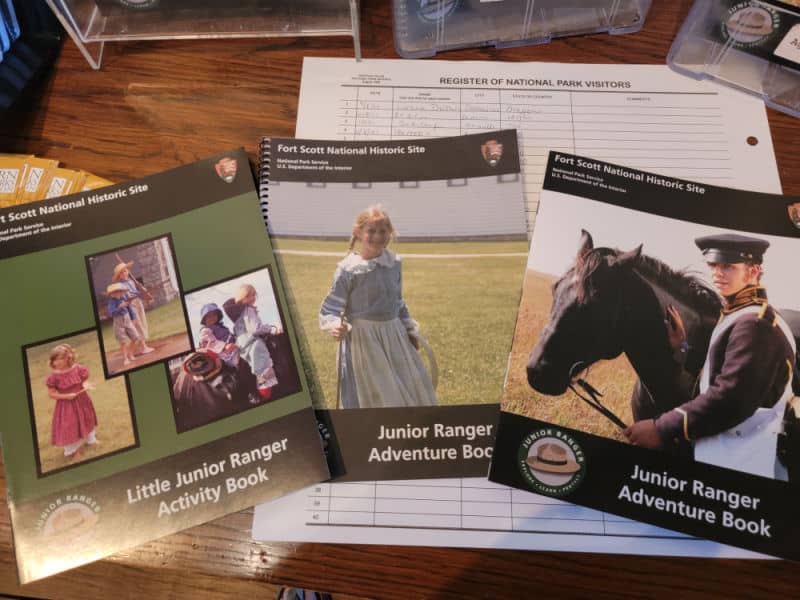 Make sure to pick up the Junior Ranger programs before you tour the grounds. Most of the questions need to be answered in specific buildings.

If you pick it up after visiting the grounds you may need to go back and re-visit buildings to find the answers.

We walked around the park before the visitor center opened and then had to revisit a few buildings to fill out the junior ranger program.

The visitor center will check your answers and make sure that you found all of the information you needed. 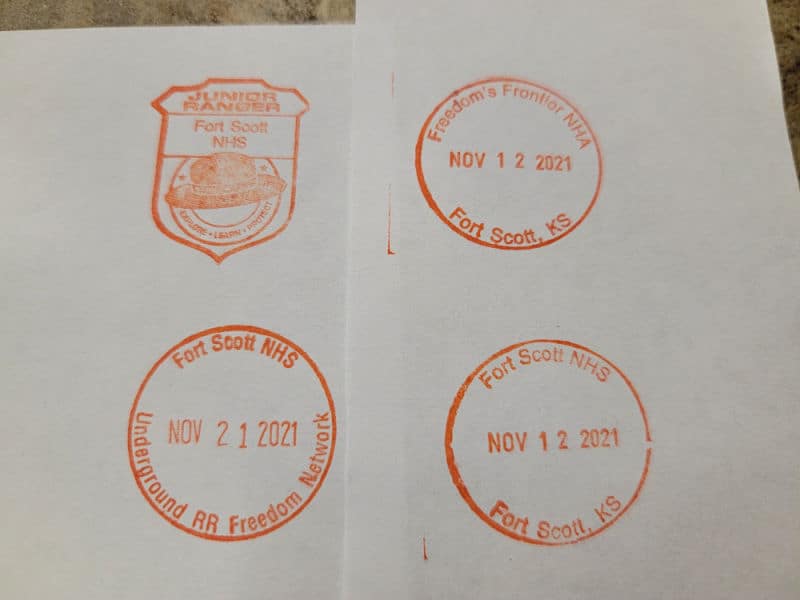 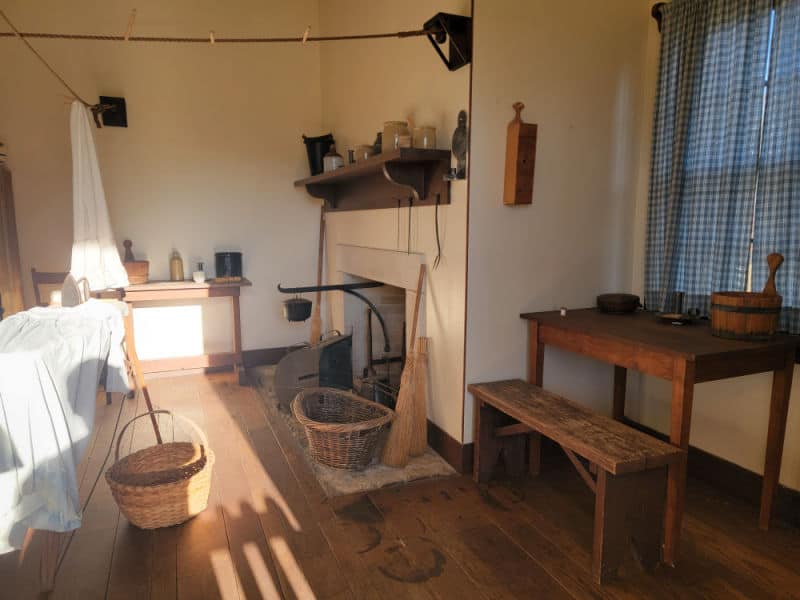 Fort Scott is about 90 miles south of Kansas City and 60 miles northwest of Joplin, Missouri.

4 miles from the Kansas-Missouri border.

Visitors may walk the park grounds, walkways, and parking lot from ½ hour before sunrise until ½ hour after sunset, except during periods of snow, ice or other inclement weather conditions that make the grounds unsafe.

Camping: There is no overnight camping or parking on the grounds

Lodging: There is no lodging in the park but there are motels and bed and breakfast establishments in and around the town of Fort Scott.

Pets: Pets are allowed on site, providing they are on a leash. However, except for dogs who are service animals, pets are not allowed inside the buildings. 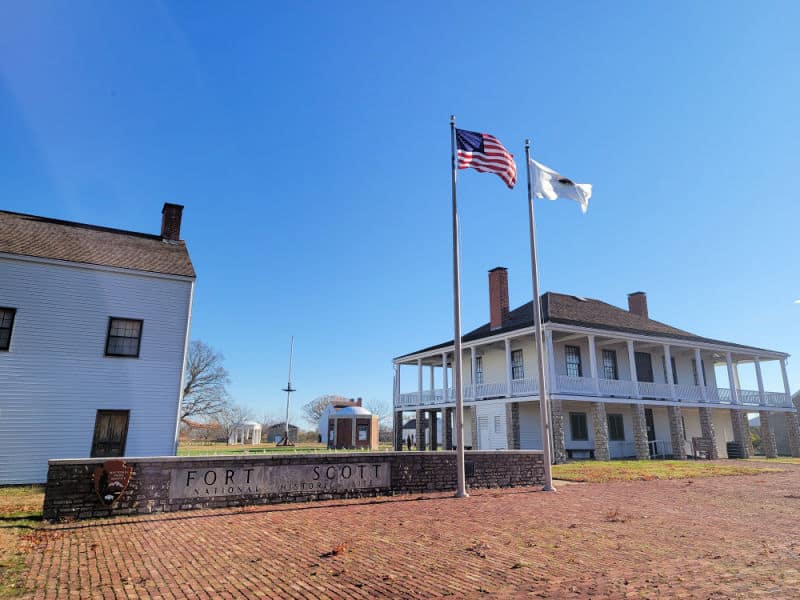