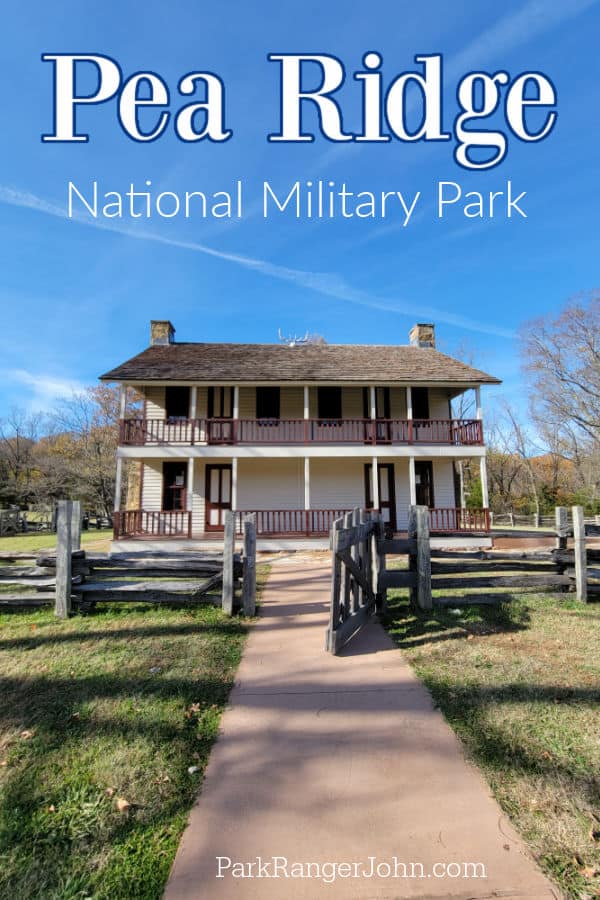 On March 7-8, 1862 the battle that saved Missouri for the Union took place near a building known as the Elkhorn Tavern.

16,000 Confederate troops were heading north to capture the city of St. Louis when they ran into 10,000 Union Soldiers.

The soldiers fought for two days in the Battle of Pea Ridge before the Confederate troops retreated. This was such an important win for the Union that many say this was one of the most important Civil War battles west of the Mississippi River.

Today the park is one of the most intact Civil War Battlefields in the United States. The park honors those who fought in the Battle of Pea Ridge in March 1862. 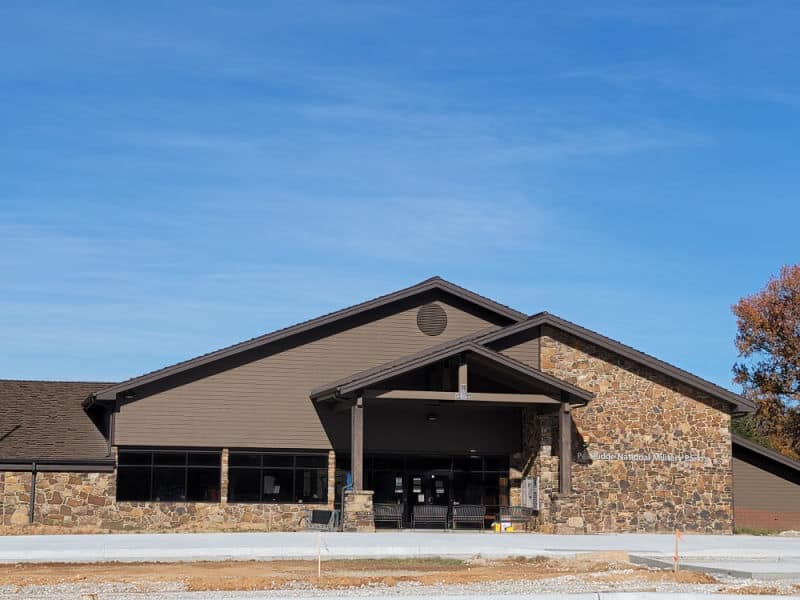 While at the visitor center you can view the 28-minute orientation film "Thunder in the Ozarks."

There is a bookstore that includes one of the finest Civil War related selections of books in the National Park System.

The park's Junior Ranger booklet can be picked up at the visitor center.

If you are unable to get a booklet during your visit you can send an email or letter to the park requesting a booklet. 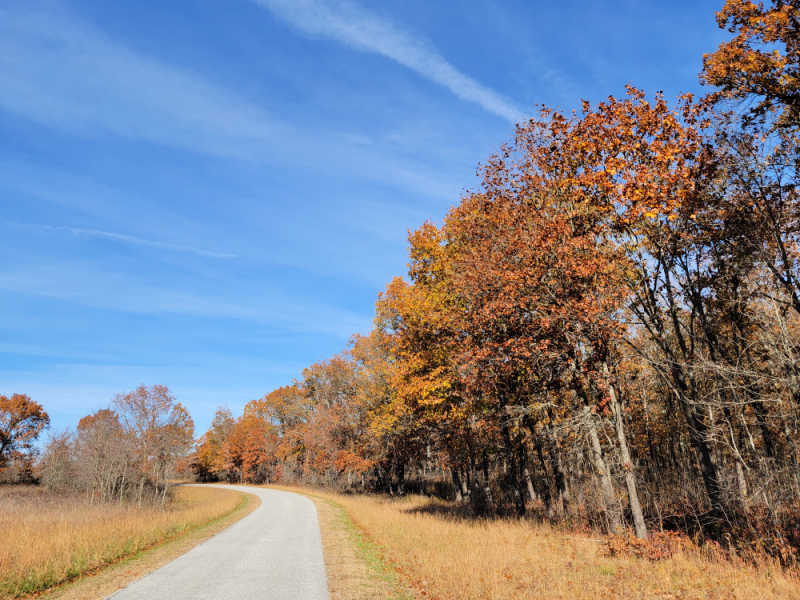 Self-Guided  7-mile, 10-stop auto tour road on a paved road. Make sure to pick up the park brochure from the visitor center or information stand. It has information on each of the stops along the auto tour.

You can see the shallow depressions in the ground that are remnants of the original Telegraph Road. This road was traveled by thousands of Cherokees and other American Indians during the winter of 1838-39.

They had to travel the road during their forced removal from their homelands.

This road was the route of the Butterfield Overland Stage Line from 1857-61. 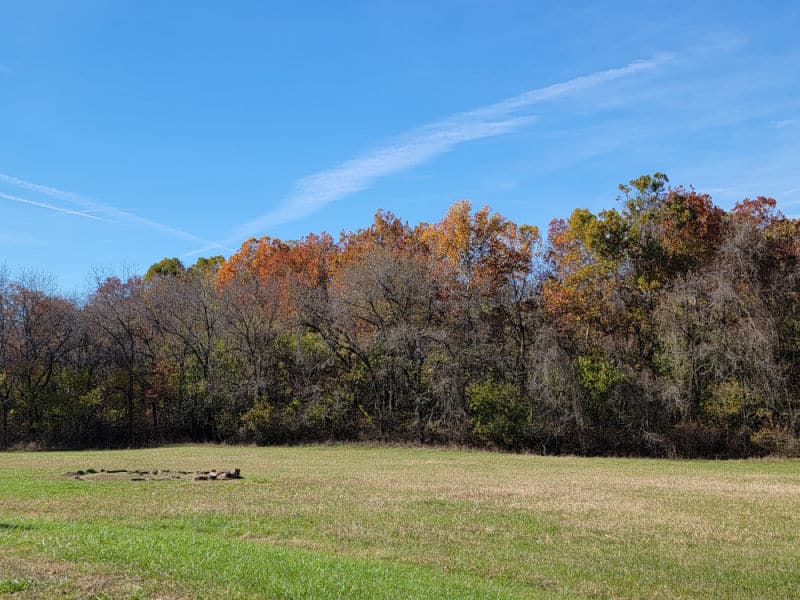 The commander believed that any Confederate attack would happen 2 miles south of here against his fortified line overlooking Little Sugar Creek.

He orchestrated the movement of the Union Army from this spot.

In this small village the wounded from both sides were brought to buildings and tents that served as field hospitals.

There is no visible evidence of the village today. 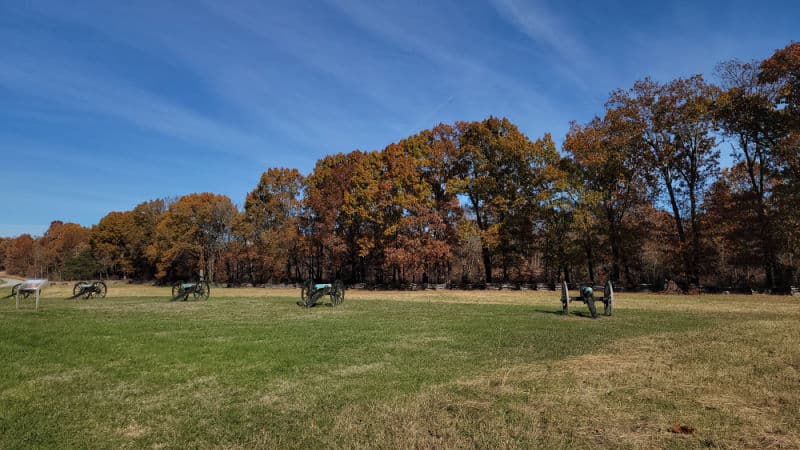 Confederate forces attacked through the woods north of this field and across the tour road. They failed to defeat the Union army deployed along the south fence line.

Pea Ridge was the only Civil War battle in which Native American troops participated. Two regiments of Cherokees totaling about 1,000 men fought for the Confederate Army.

The brochure says that from the overlook the Boston Mountains should be visible.

During our visit we could not see anything from the Overlook through the trees. 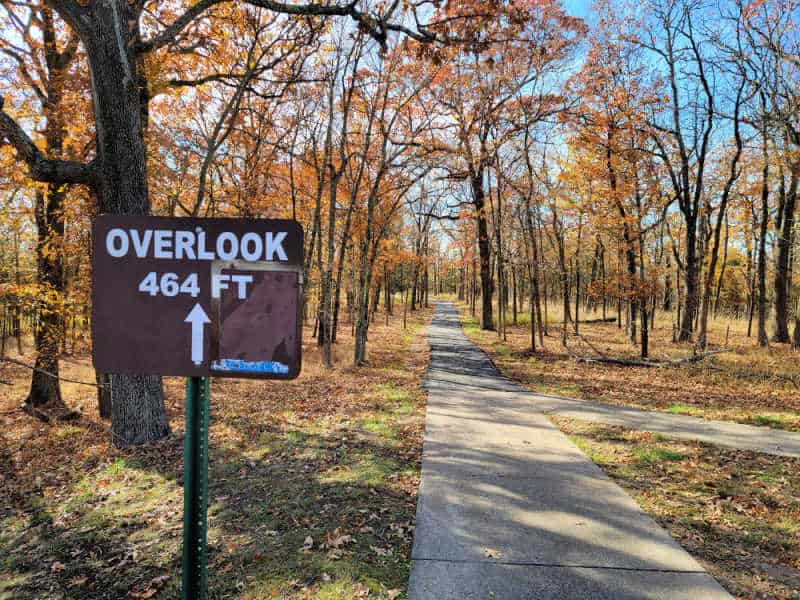 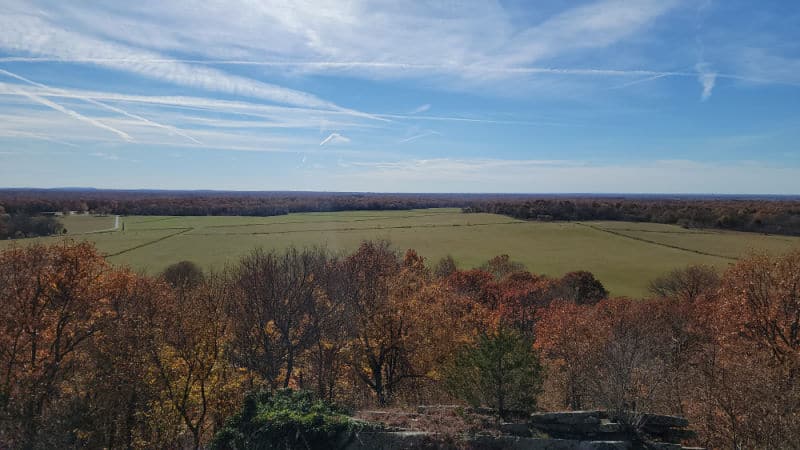 Make sure to stop at the East Overlook stop on the auto tour. There is a 464 foot trail to an amazing overlook.

The trail is paved and even to the overlook. From the overlook you can look out over the battlefields and see just how big the park is.

There are fantastic interpretive panels that describe what happened during the battle and where each set of troops was positioned. 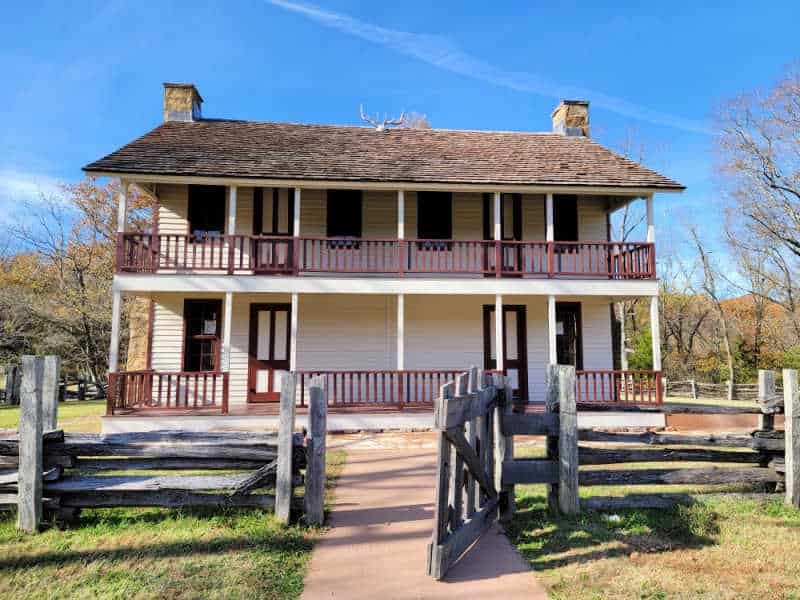 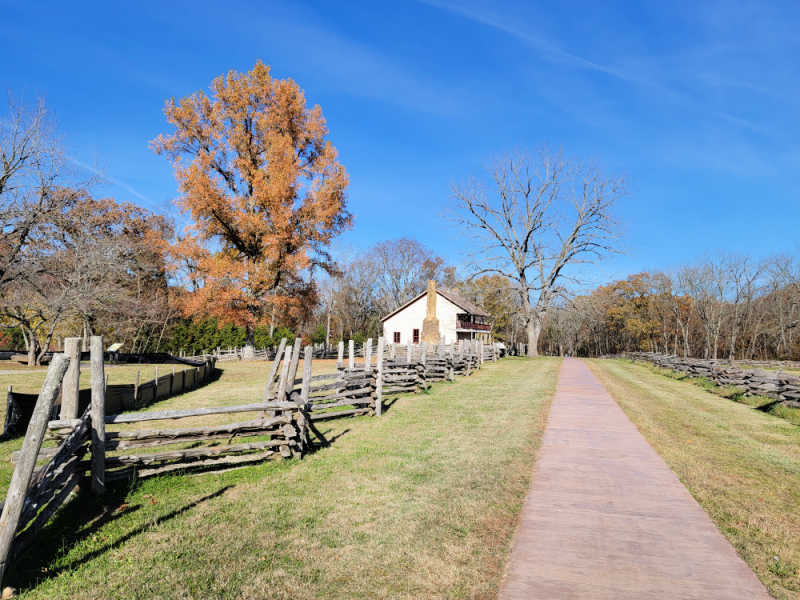 Before the Civil War the Elkhorn Tavern served travelers along the Telegraph Road.

Elkhorn Tavern served as a hospital during the Battle of Pea Ridge and was also the headquarters for Confederate General Earl Van Dorn.

The building was hit by a cannonball during the battle but survived. In 1863 Confederate Guerillas burned the tavern down. It was rebuilt in the 1880s in the style of that

The present building is a reconstruction of the tavern.

At sunset on March 7th, Confederate soldiers charged across this field in an attempt to smash the regrouped Union forces.

They were met with devastating musket and artillery fire which drove them back into the woods.

On the morning of March 8th Union artillery deployed here. Their fire forced the Confederate soldiers to retreat from the Tavern area.

The Union line runs from present day US-62 to the south to the bare open hill to the northwest.

This stop is located .6 miles from US-62. You can see time eroded Union trenches on the bluff above Little Sugar Creek. 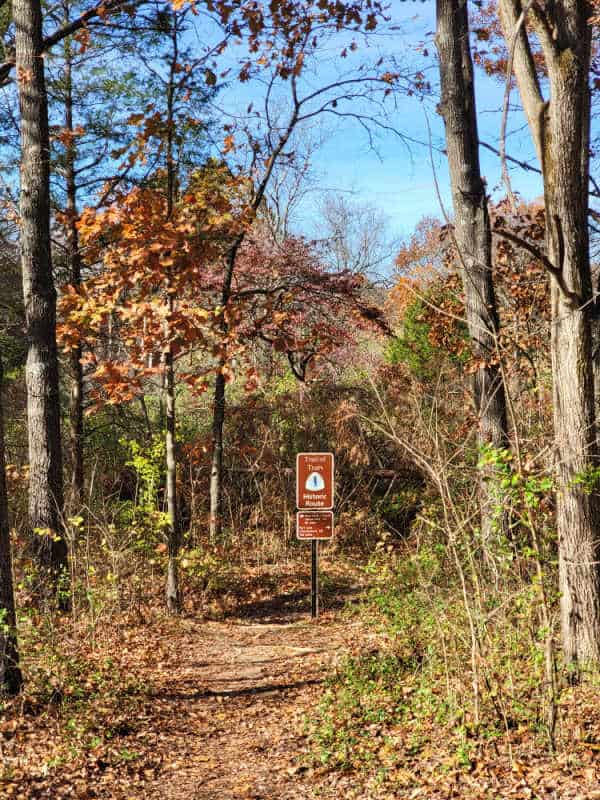 There are ten miles of hiking trails and 11 miles of horse trails that wine through the 4,300 acres of the park.

During our visit we were able to get the following stamps 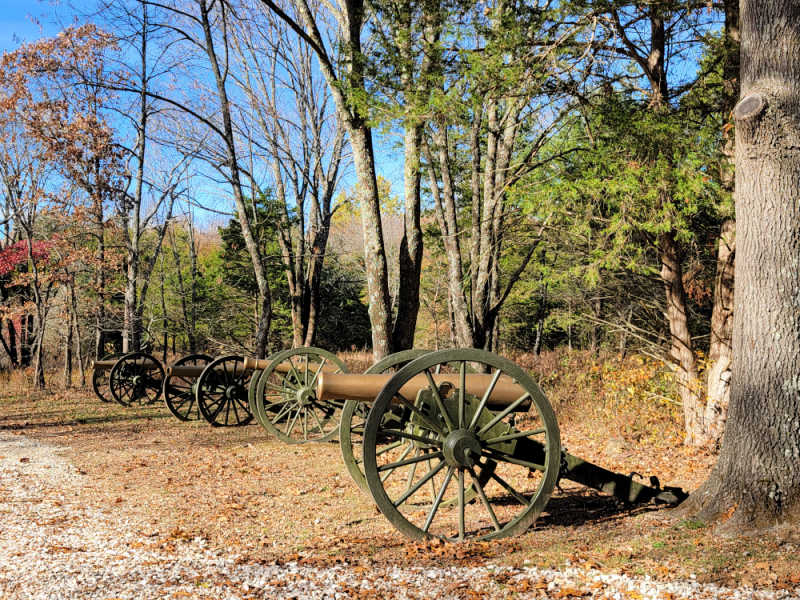 The entrance road is located on Highway 62, 1.3 miles east of the intersection of Highways 62 and 72.

Park Hours - The battlefield driving tour road is open for visitors to tour 7 days a week from 6 am to sunset.

Camping - There is no camping available within the park.

Lodging - There is no lodging or overnight parking available within the park.

WiFi - public WiFi that is available is inside the visitor center.

Cell Service - Cell service is limited along the auto tour.

Pets - Pets must be on a leash less than 6 feet in length. Pets are not allowed inside buildings. 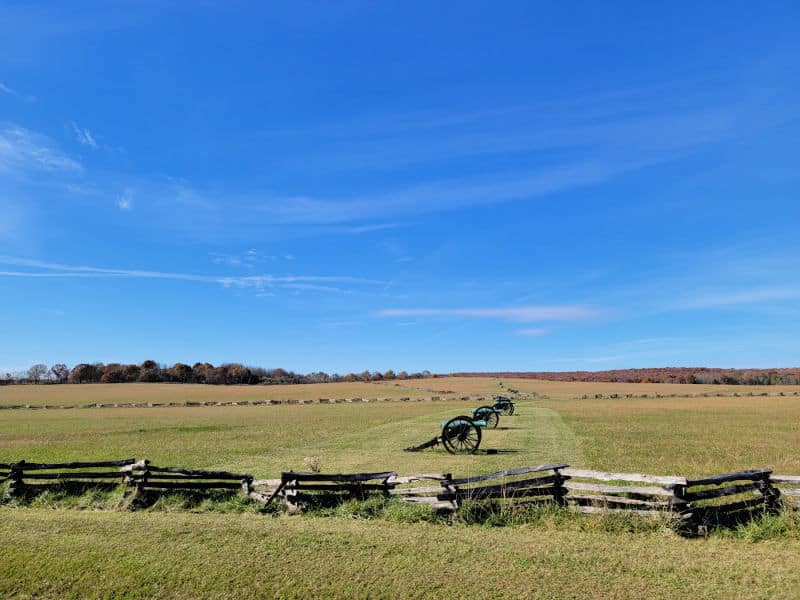