Complete Guide to Wilson's Creek National Battlefield in Missouri. The site of the 2nd major battle during the Civil War. 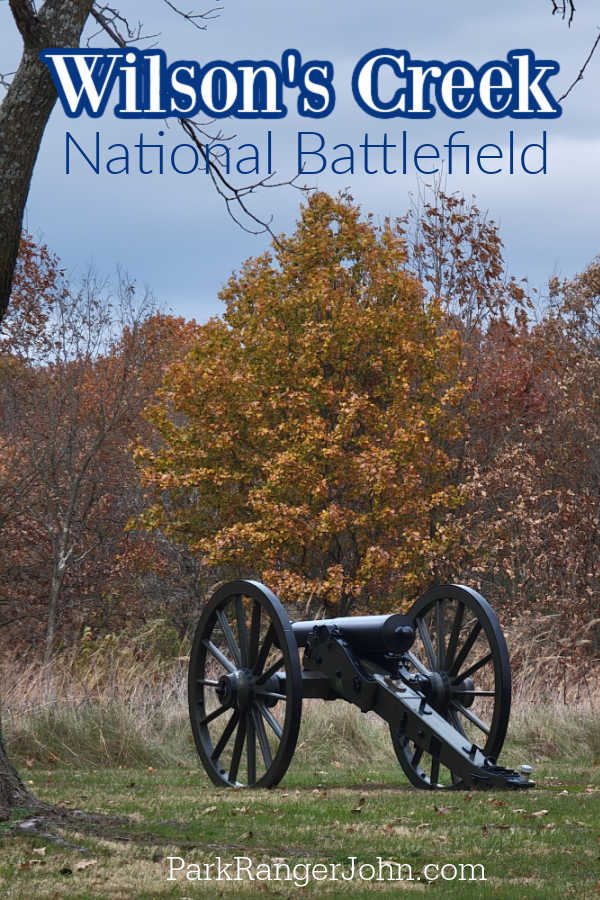 Wilson's Creek was the first major battle of the Civil War fought west of the Mississippi River.  The state of Missouri was of great importance strategically to both sides during the Civil War.

Missouri had more skirmishes and battles than any other state other than Virginia and Tennessee. On August 10, 1861 the first major battle fought west of the Mississippi River happened at Wilson's Creek.

Brigadier General Nathaniel Lyon was killed in the battle becoming the first Union general to die in battle.

The battle of Wilson Creek ended in a Confederate victory. The Southern army was unable to pursue the retreating Union forces. This win allowed the Confederacy to take control of Southwestern Missouri for a bit. 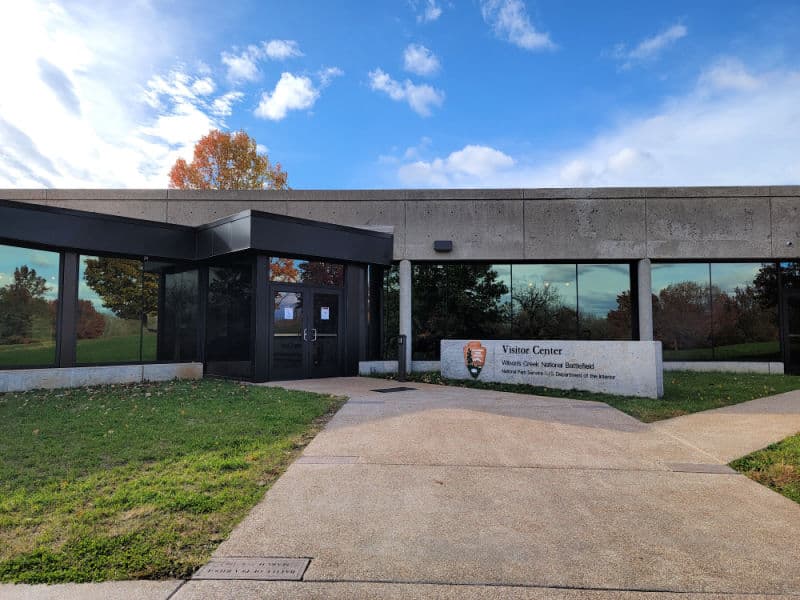 Yes, especially if you are interested in learning more about Civil War battlefields.

The parks visitor center has amazing displays and the movie does a great job of telling the story of Wilson's Creek.

The auto tour gives visitors the opportunity to see the landscape where the battles occurred.

An estimated 2300 soldiers died during the battle, including the first Union General of the Civil War, Brigadier General Nathanial Lyon.

Missouri was a politically split state, with half of the state wanting to remain in the Union and half wishing to leave.

The pro-Confederate forces from Missouri, called the Missouri State Guard, fought alongside the Confederates at Wilson’s Creek.

The Union Gen. Lyon surprised the Confederate forces camped at Wilson’s Creek in the early hours of August 10th.

The battle was fierce and most of the fighting occurred on ‘Bloody Hill’.

The battle lasted for around 6 hours. The Battle of Wilson’s Creek was a Southern victory that secured Southwest Missouri for the Confederates.

The state of Missouri had divided opinions over its stance during the American Civil War.

Missouri was a slave-owning border state which had soldiers fighting for both the Confederates and the Union. The Missouri State Guard was a pro-Confederate militia created after the Camp Jackson Massacre.

Before the Union and Confederates met on the battlefield at Wilson's Creek, the Union and Missouri Militia had clashed violently in St. Louis.

Here, the Union attacked the militia’s camp because of their ties to the Confederacy. The Union marched the captured members of the militia through the streets of St. Louis. This turned into a violent riot, killing many.

After the incident in St. Louis, the Missouri State Guard was established under the leadership of Gen. Stirling Price.

After the Camp Jackson Massacre, Union General Lyon and his forces camped at Springfield, 10 miles from Wilson’s Creek. Under General Ben McCulloch's command, Confederate forces made their way to Wilson's Creek to reinforce the Missouri State Guard. 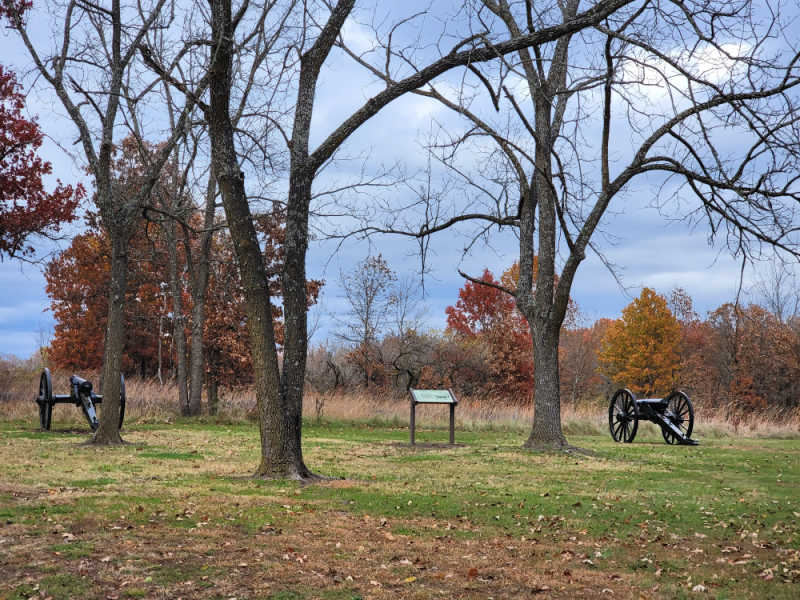 Despite this, he would not leave Missouri without a fight. Lyon planned to attack even if it was only to ensure that his men could retreat without the worry of being pursued by the Confederates.

On August 10th, at 5 am Lyon, made his move. He sent 1200 men under Gen. Franz Sigel to attack the Confederates from the back. The rest of Lyon’s forces caught the Confederates by surprise.

The Confederates camped in Farmer Sharps Field were surprised by heavy artillery fire on their camp from the hill above, what would become known as ‘Bloody Hill’. Although initially panicked by the surprise attack, the Confederate forces soon reorganized.

The Battle of Wilson’s Creek

The Confederates focused on Sigel’s men to their rear. The fighting was centered around the Sharp House.

The Confederates attempted to break the Union lines three times throughout the morning and failed. Gen. Lyon however, was killed during the battle and replaced with Gen. Samuel D. Sturgis.

Sigel's forces were the first to be pushed back by the Confederates because Sigel mistook the uniforms of a Louisiana regiment for Union troops and hesitated to return fire.

At this early stage in the war, uniforms were not standardized. Sigel's forces split up and retreated to Springfield while Gen. Sigel hid in a cornfield to avoid capture by the Confederates.

Although the Confederates managed to push back Sigel’s men, they could not break the Union line on Bloody Hill. Gen. Lyon was killed here during the second Confederate attack.

The Confederate's third attempt to take Bloody Hill would be the final push of the Battle of Wilson’s Creek.

The fighting lasted an hour. By this point in the morning, the heat was unbearable and many men were dropping from exhaustion.

The Confederates fell back a third time which gave the newly promoted Union Gen. Sturgis a chance to survey his army and weigh up his options.

The Union had suffered heavy casualties in the battle and was running low on ammunition. Sturgis decided to retreat rather than continue with the battle. The Confederates were too disorganized to follow.

Although the Confederates won the Battle of Wilson’s Creek and managed to retain the area of Southeast Missouri, the state of Missouri remained as part of the Union throughout the Civil War.

The Wilson’s Creek National Battlefield Park protects the site where the battle was fought, with a monument on top of Bloody Hill in honor of Gen. Lyon. 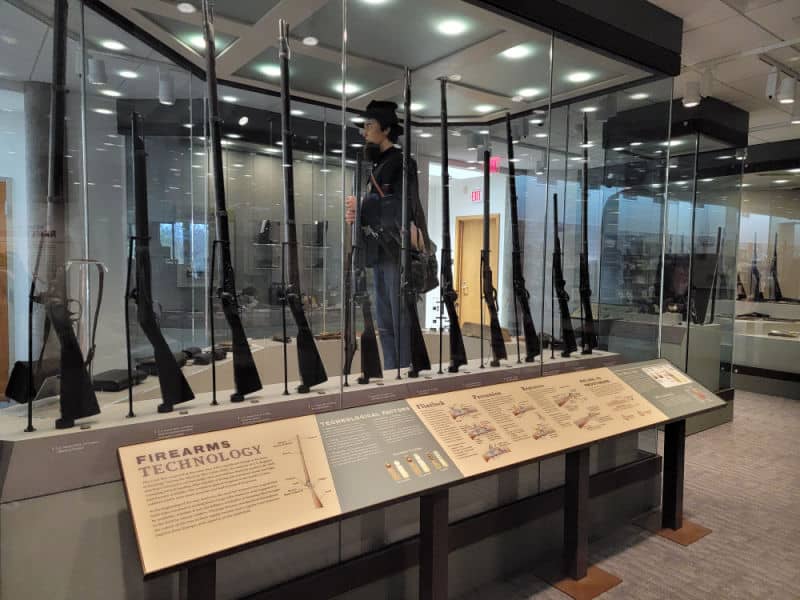 Things to know before your visit to Wilson's Creek National Battlefield

Pets must be on a leash not more than six feet long and are not allowed in buildings.

Horses are restricted to authorized trails

We had intermittent service while in the park.

Tour road, battlefield, and trails are open during posted hours (changes by season).

Tour Road opens at 7:00 am for walkers and bicycles only.

Vehicle entrance begins at 8:00 am which requires a gate token issued inside the visitor center.

There is Wi-Fi available in the visitor center.

There is a fairly good size parking lot next to the visitor center. There are multiple pull-offs along the auto-route

The National Park Passport Stamps are located at the front of the bookstore.

Wilson's Creek NB is part of the 2005 Passport Stamp Set

There are 6 EV Charging stations within 10 miles of Republic, Missouri. 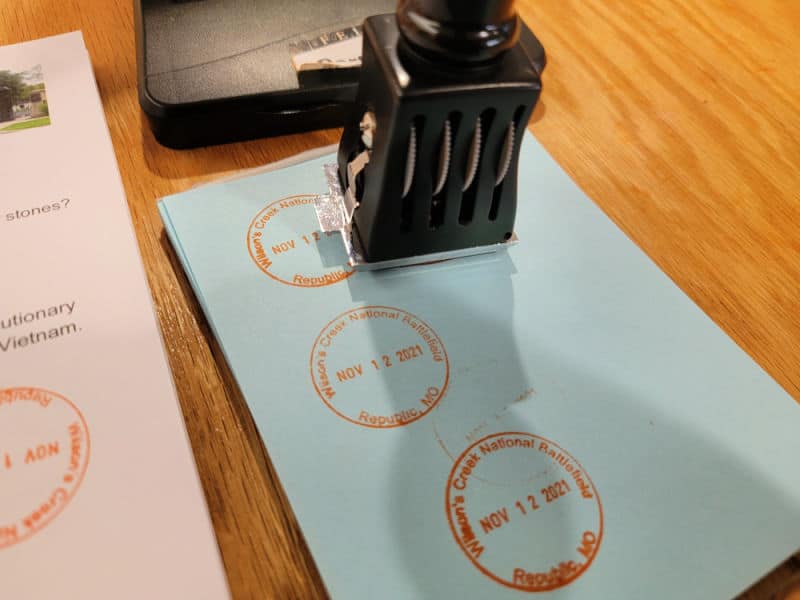 Check out how Wilson's Creek NB compares to other  National Parks by Size. 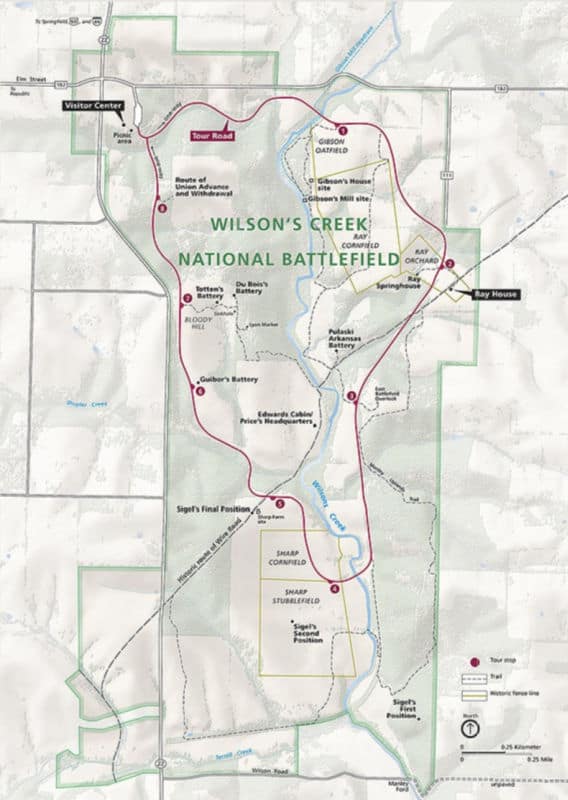 Where is Wilson's Creek National Battlefield?

Wilson's Creek NB is located in southwestern Missouri near Springfield.

The visitor center is at the entrance of the park before starting the auto tour route. 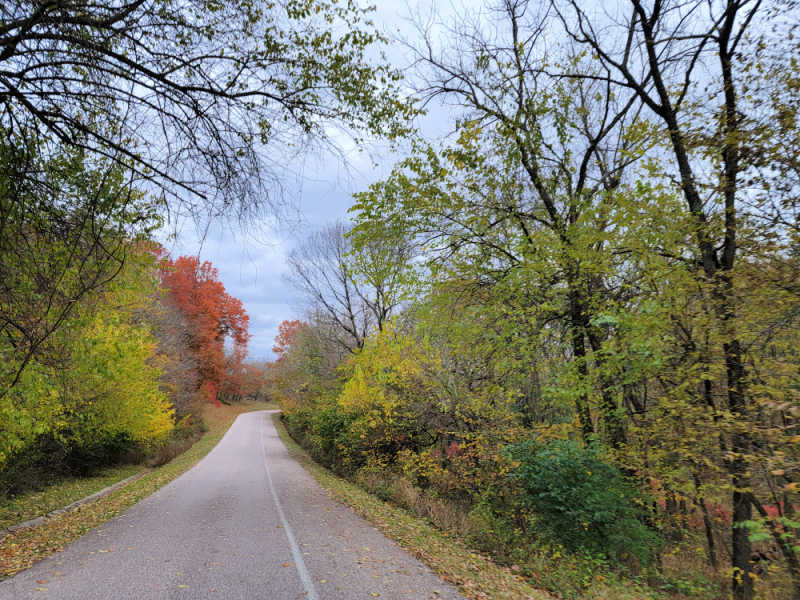 Getting to Wilson's Creek National Battlefield

Turn left; the entrance to the battlefield is on the right.

From U.S. Highway 65 (south of Springfield):

Follow ZZ north to Farm Road 182. Turn right; the entrance is on the right. 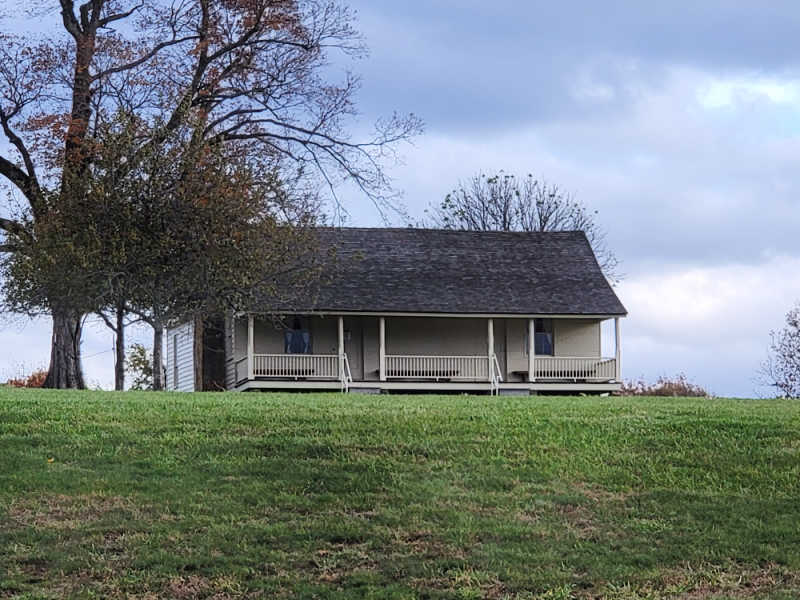 The best time to visit the park is spring and fall. Though the summers can be beautiful but muggy.

The hottest weather is from June 2nd to September 16th with an average daily high above 80 degrees.

The coldest weather is from November 27th to February 25th with an average daily temperature below 52 degrees.

May experiences the most rain with an average of 4.7 inches.

The snowiest months are from November 16th to March 25th. January receives the most snow with an average of 3.4 miles.

The muggiest weather is from May 20th to September 24th. July is the muggiest month. 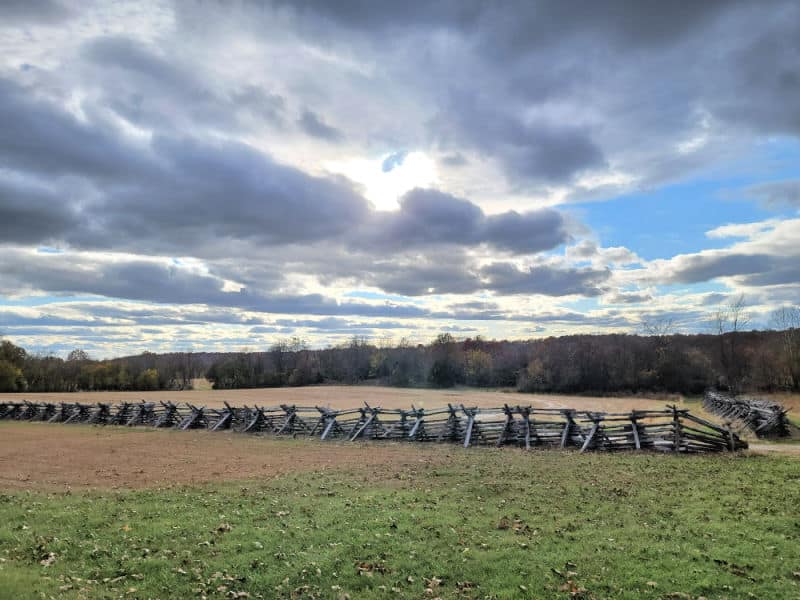 Best Things to do in Wilson's Creek National Battlefield

We suggest planning at minimum a couple of hours to visit the park.

You will need to stop at the visitor center and show your National Park Pass or pay the entrance fee to get a token for the auto loop.

While in the visitor center make sure to check out the park video. It really shows what happened during the Battle at Wilson's Creek.

We highly suggest watching the video before heading out on the auto tour so you know why each spot is included.

The visitor center also has a large display of guns, swords, and other weaponry. There are interpretive panels discussing the Civil War.

The Junior Ranger Program can be filled out while in the visitor center. There are a couple of pages from the auto loop but you can turn it in before completing the auto loop if you are low on time.

There is a 4.9-mile driving tour with stops at important battle locations.  There are eight interpretive stops at significant points on the tour road including Bloody Hill.

Each of the stops is clearly labeled and has interpretive panels discussing what happened in that location.

The Ray House is open daily (subject to staff and volunteer availability) between Memorial Day and Labor Day.

The John K. and Ruth Hulston Civil War Research Library at Wilson's Creek National Battlefield is open 9:00 am to 12:00 pm and 1:00 pm to 4:00 pm Tuesday-Saturday, closed Sunday and Monday.

The research library includes around 15,000 cataloged books and other items. 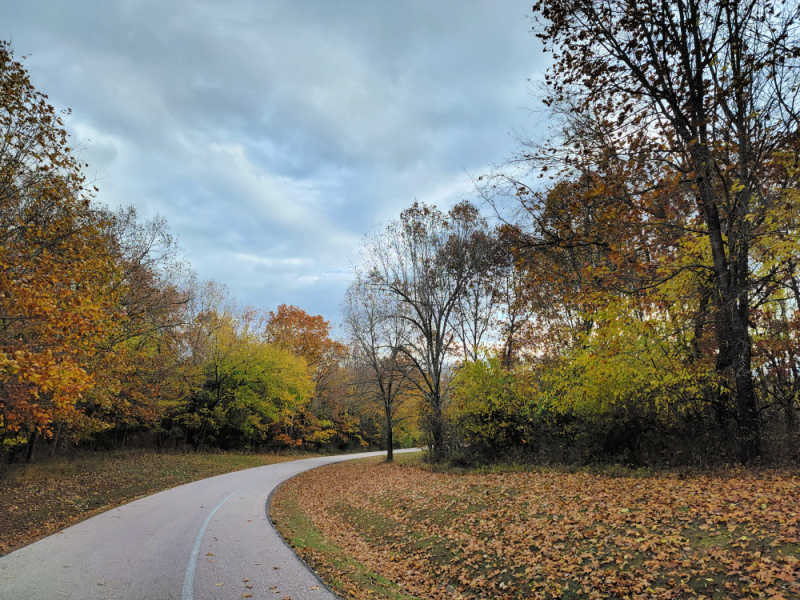 There are five short walking trails within the park along with a trail system for longer hikes and horseback riding. 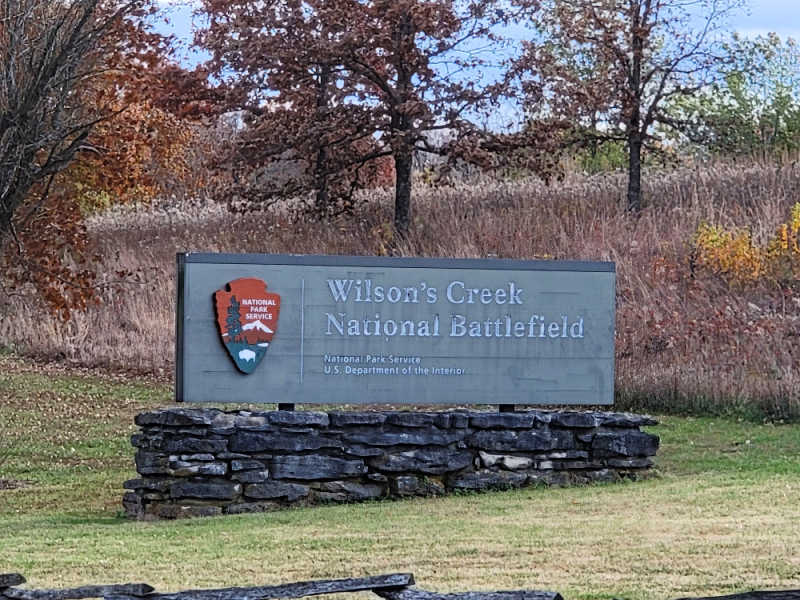 How to beat the crowds in Wilson's Creek National Battlefield?

We did not experience any crowds during our visit. The auto tour gives you the opportunity to pause or wait if there is a crowd of cars ahead of you.

Where to stay when visiting Wilson's Creek National Battlefield

Carson's Country Court - 37 miles from the park in Branson, Missouri

Branson Stagecoach Campground - 43 miles from the park in Branson, Missouri

This campground offers lodging, RV and Tent Sites, a playground, and a pool.

Check out other nearby campgrounds on CampSpot. 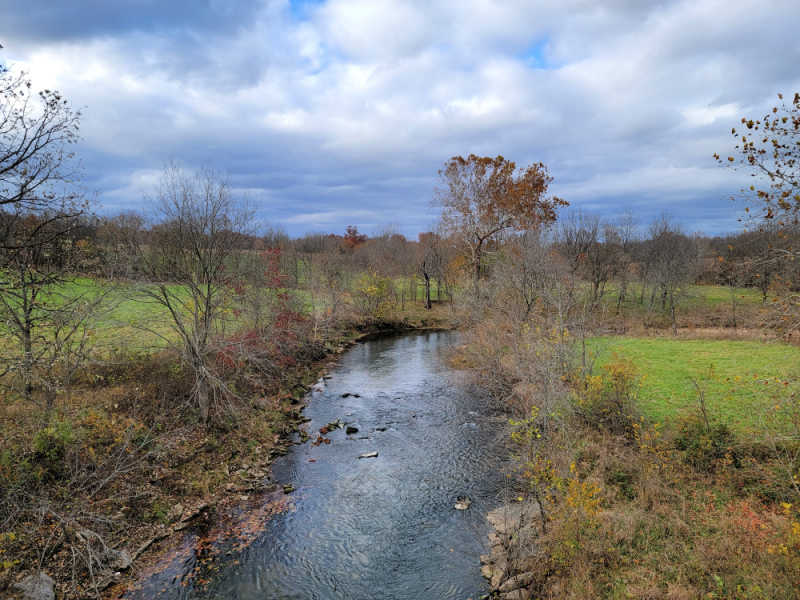 Wilson's Creek: The Second Battle of the Civil War and the Men Who Fought It (Civil War America) 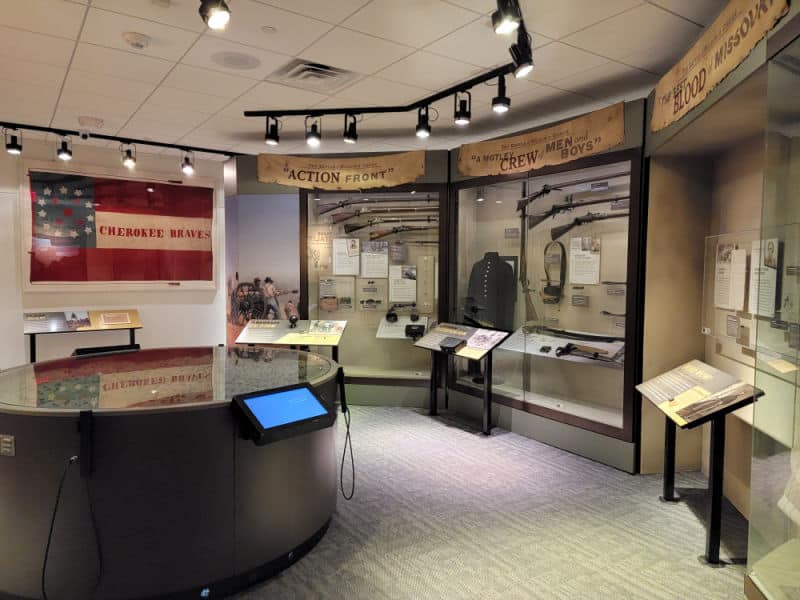