Fort Smith National Historic Site is located in west-central Arkansas within the town of Fort Smith. The park is open year-round and offers the opportunity to tour the foundations of the original fort. 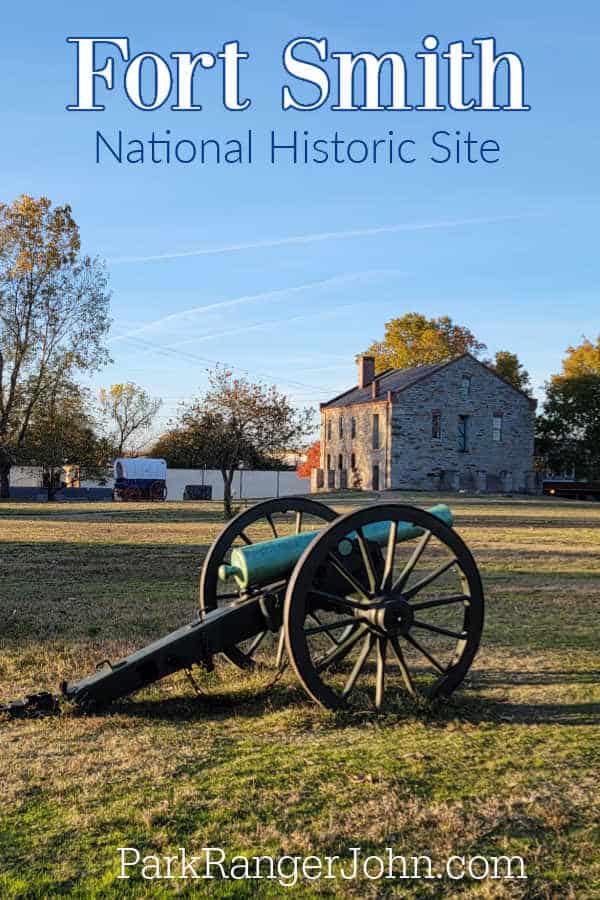 If you want to experience the real “Old West,” then a trip to Fort Smith National Historic Site is in store. The site of two important frontier forts, Fort Smith is perhaps best known as the headquarters of the “Hanging Judge” of the Old West.

It was here that U.S. District Judge Isaac C. Parker sent more than 70 outlaws to the gallows during the rough and tumble days following the Civil War. Parker’s deputy marshals provided the inspiration for such Hollywood classics as “True Grit,” “Rooster Cogburn” and “Hang Em High.”

Ironically, Parker opposed the death penalty but in cases of murder and rape, U.S. law allowed him only one sentence – death. 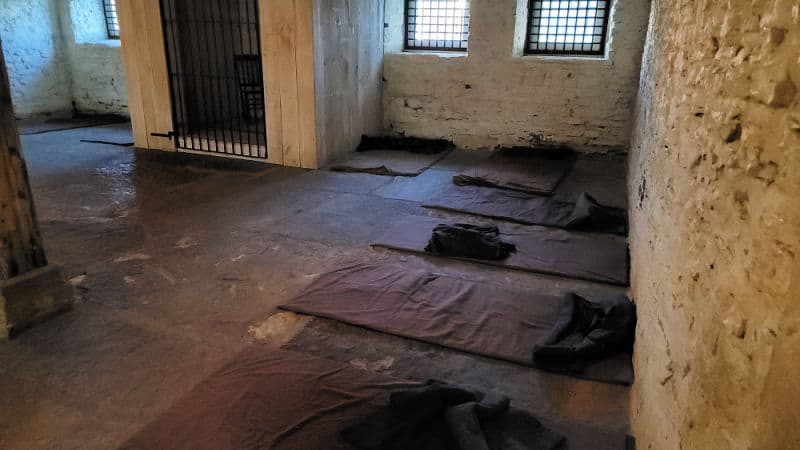 The National Historic Site features ruins and buildings from the original fort, the notorious “Hell on the Border” jail, Parker’s courtroom, exhibits on the deputy marshals and outlaws of Fort Smith, and the reconstructed gallows where so many outlaws met their fates.

The 1803 Louisiana Purchase marked the greatest expansion of the United States but there was a caveat to white settlement. All the territory was occupied by Native Americans and labeled "Indian Territory" by the government.

Tribes were already being pushed around and relocated. The Cherokee arrived in the Arkansas River Valley and clashed with native residents the Osage. Washington responded with the creation of Fort Smith to keep the peace.

The site of the first fort, and the existing second fort, have been preserved at Fort Smith National Historic Site in Arkansas. A city bearing the same name developed outside the fort and the park is located in the downtown area near Fort Smith Museum of History and Fort Smith Trolley Museum. What was once a wild-west outpost is now citified.

The original fort was built in 1817, at Belle Point, a strategic spot overlooking the Arkansas and Ploteau rivers.

The fort was abandoned in 1824, as the army moved further west in its operations only to return in 1836, to deliver provisions to relocating tribes on the infamous "Trail of Tears" in which 10,000 members of the Cherokee, Seminole, Creek, Choctaw, and Chickasaw perished on the forced march.

The log buildings disintegrated over time and stone foundations disappeared beneath the soil. That foundation was uncovered in 1958.

Today, visitors can take the scenic river trail and see the outlines of where the first fort stood and the flagpole site. Markers provide information. There really is not much to see and imagination is required to envision a bustling fort.

However, the scenery is pleasant and there are fine river views offering a glimpse to a past when all was wild. Look hard to see geese, turtles, and other wildlife.

The second fort was built further inland in 1838, in response to the fear of Indian uprisings. This time the fort was constructed of stone to withstand heavy attack. War with Indian never materialized but due to growing expansion, Fort Smith became an important supply depot thanks to close proximity to river steamboats hauling goods.

The town grew and prospered. During the Civil War, the fort served as a supply depot for both Union and Confederate sides in war divided Arkansas.

The military vacated the fort in 1871. The facility did not remain vacant for long. The federal court for the western district of Arkansas occupied the large barracks building from 1872 to 1896 and justice was administered over Indian Territory.

This was headquarters for the U.S. Marshal's service. The basement jail enjoyed a brutal reputation. The courtroom was presided over by "The Hanging Judge," Isaac C. Parker.

The converted barracks to the courthouse is a dignified well-preserved structure. 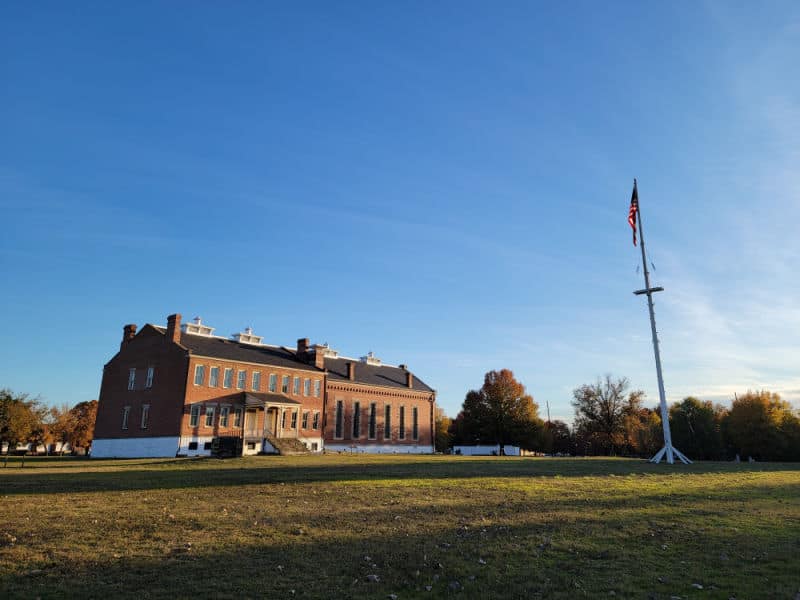 The visitors center is located in the basement and the first thing to do is watch the orientation video in the mini-theater. Take note of the movie posters from films like "True Grit" and "Hang 'Em High" whose stories took place in the territory.

The jail does not look like much being a large empty space. The two cell areas once held up to 50 men each with disgusting sanitary conditions and emanating stench.

An original cell key is displayed. Artifacts such as old bottles and dominoes were unearthed during restoration.

The Fort Smith gallery relates its history from a frontier fort to a dispenser of justice. There are four small-scale models of the fort depicting its appearance at different times.

Excavation has yielded a treasure trove of artifacts. Broken pottery and bottles may just be debris but provide little clues as to what life was like then. Old dress buttons remain from army days. The Civil War is represented by weapons and diorama of the 1863 Battle at Devil's Backbone. 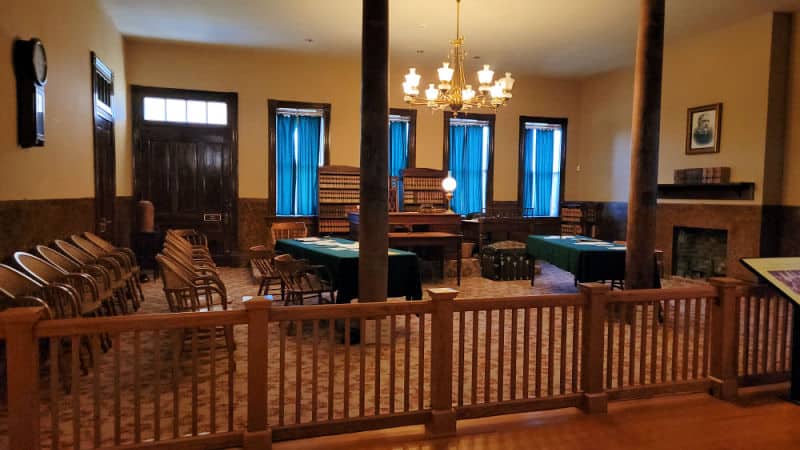 A centerpiece is the recreated Judge Parker courtroom and office furnished with mostly reproductions. The ornate desk and chair were actually used by Parker in Washington, DC when serving in Congress. The bell, inkwell, and books are original. That is Judge Parker's walking stick and personal copy of the constitution.

Western enthusiasts will appreciate the U.S. Marshal's display including genuine badges and arrays of Colts, Winchesters, and other vintage guns. 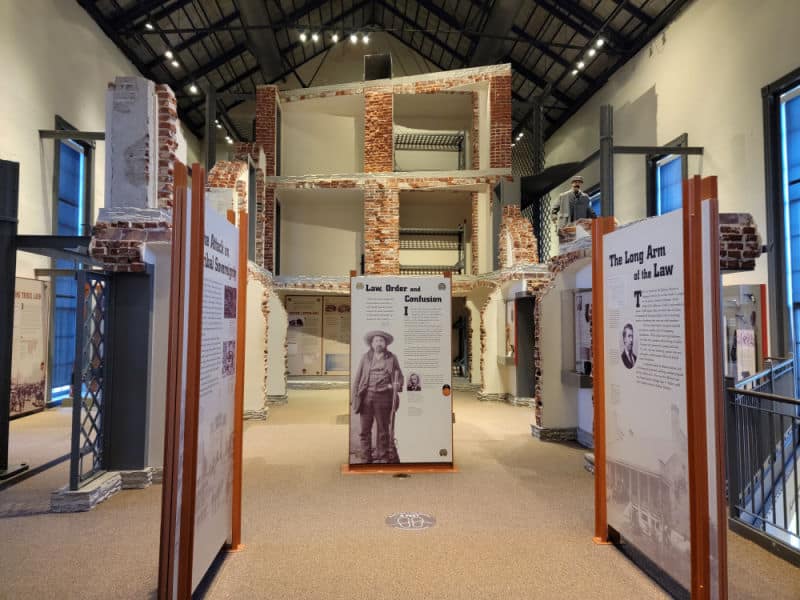 Due to overcrowding and bad conditions, the jail was rebuilt to 72 cells on three tiers with the murderer's row on the bottom. Visitors are welcome to step inside a recreated "iron cage' and get a feel of being locked up.

The accompanying jail exhibits are the most interesting in the museum. The Belle Starr case contains a gold bracelet reputed to belong to the notorious female outlaw. There are numerous guns on display including those used by outlaws plus vintage handcuffs and leg irons.

George Maledon is a good story. He was the hangman who after retiring, toured with tent shows telling grisly tales and showing relics.

Cherokee Bill was an infamous outlaw and murderer and displayed is the rope that supposedly swung him. 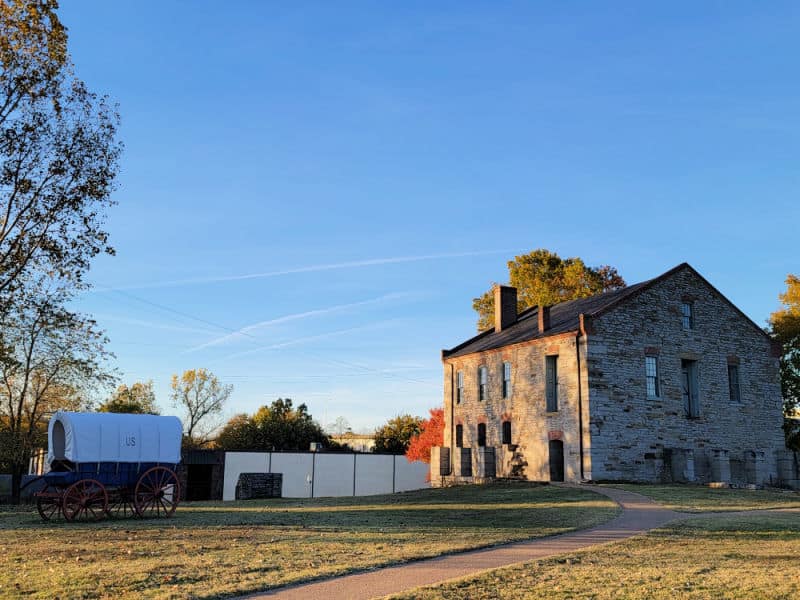 There is still more to be explored on the grounds. The only other surviving structure is the commissary storehouse. The large stone building is the oldest in Fort Smith. Visitors can venture inside which appears as a supply depot.

Elsewhere are foundations for the officer's quarters and women's jail and sites of the main guardhouse and officer's gardens.

The well site is designated by a marker and flagstaff rebuilt to the original height of 100 feet so the flag could be seen from a great distance.

The official entrance gate is a memorial built of stones from the original fort. 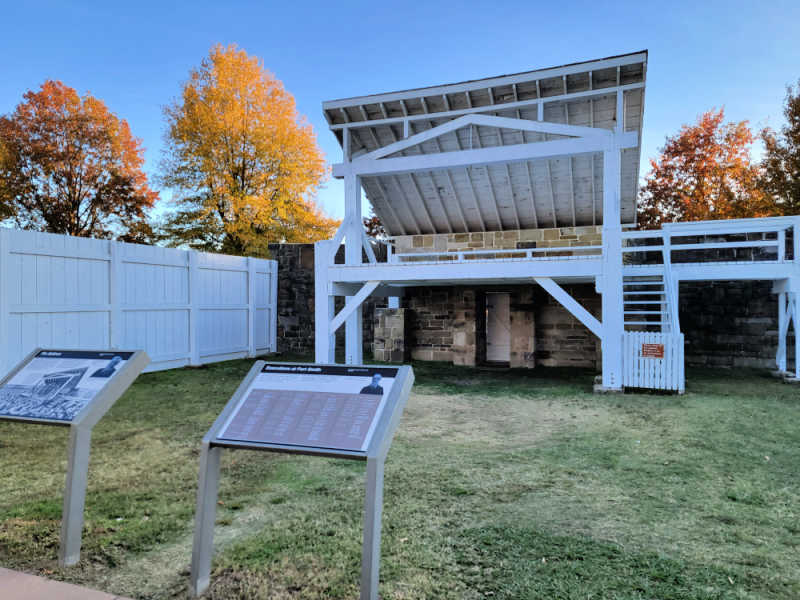 The gallows were torn down in 1897 and now a replica stands in its place. There is a list of the 86 men who met their demise at the end of a rope during the course of 23 years. On one occasion, six swung at the same time. An old jail wagon is parked there.

Fort Smith captures the flavor of the old west from wilderness Indian Territory to turn of the century civilization.

The outlaws depicted here are the real deal being dirty and mangy characters and not "clean" Hollywood stand-ins. Those traveling cross country on Interstate 40 should stop by the fort. 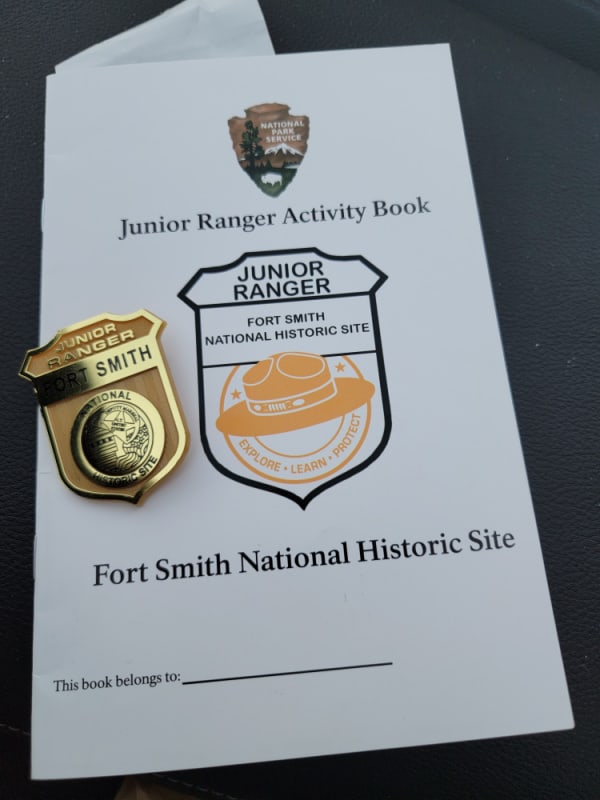 The Junior Ranger program can be picked up from the visitor center.

The majority of the junior ranger program can be filled out within the visitor center. Plan time to find all of the answers. 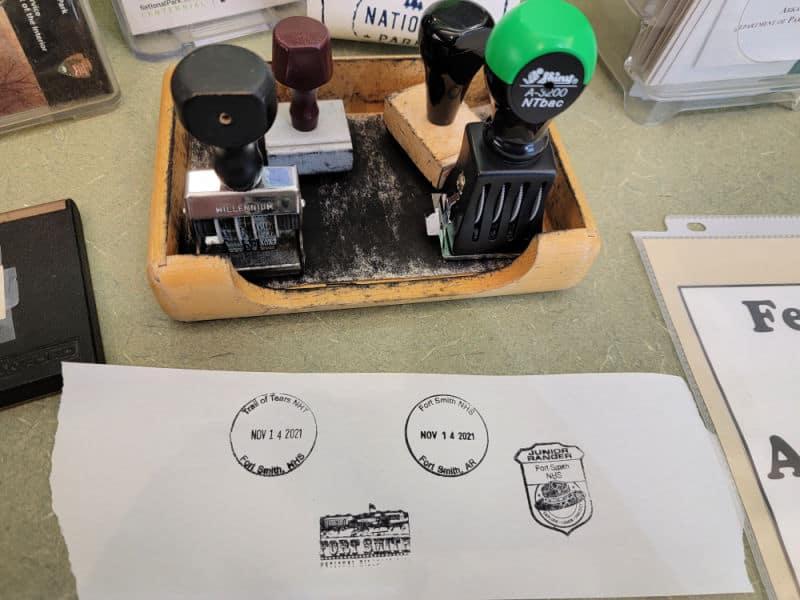 National Park Passport Stamps can be found within the visitor center.

We found the following stamps while at the park: 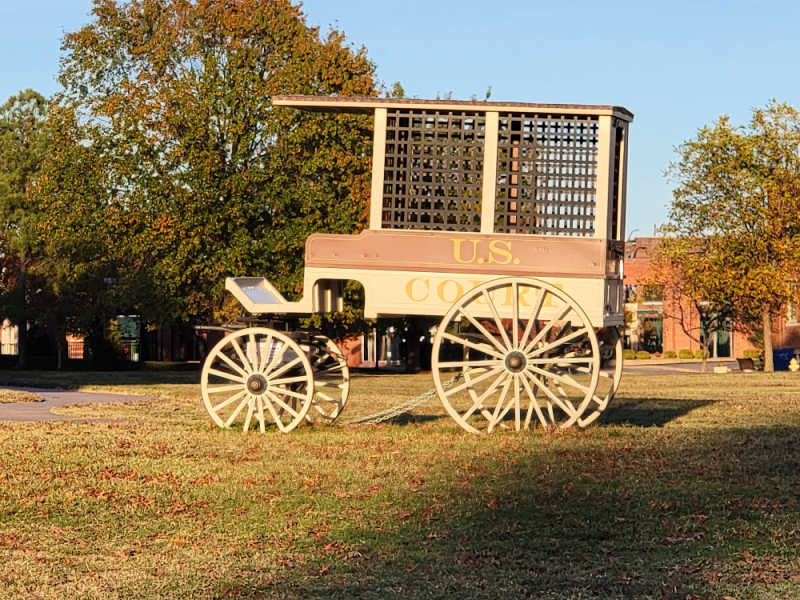 The parking lot can fit large RVs and buses.

Park Hours - Park grounds are open from 30 min before sunrise and 30 minutes after sunset.

Entrance Fee - $10 per person to tour inside exhibits.

There is no fee to visit the park grounds.

WiFi - Free WiFi is available inside the Visitor Center

Cell Service - Cellular access is available for most users 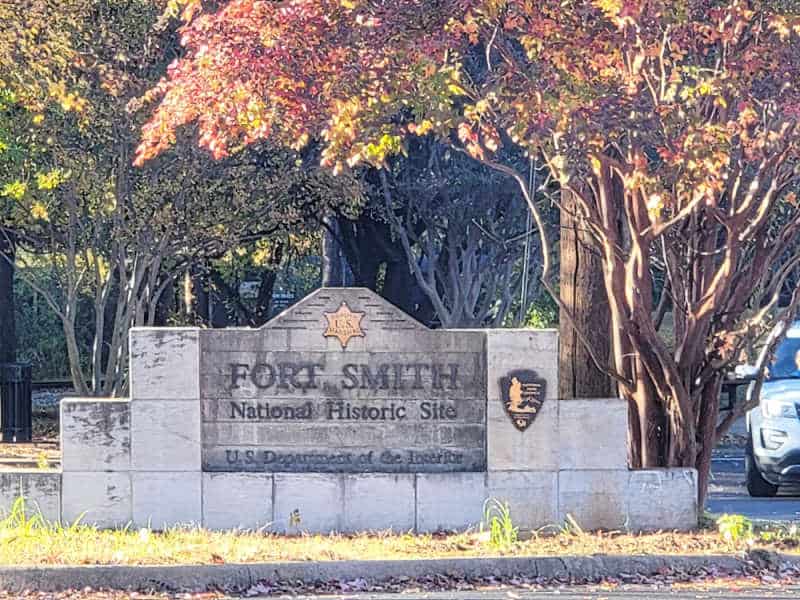 Don't miss all of the epic things to do in Fort Smith, Arkansas!