The Oklahoma City National Memorial honors the 168 people killed in the deadliest act of domestic terrorism in U.S. History. Along with the survivors, rescue workers and those changed forever by this tragedy.

On April 19, 1995, the Alfred P. Murrah Federal Building in Oklahoma City was destroyed when a bomb was detonated.

The OKC memorial was dedicated in 2000 on the anniversary of the attack 5 years before. The memorial consists of the Gates of Time, encapsulating 9:02 am the moment of the explosion. 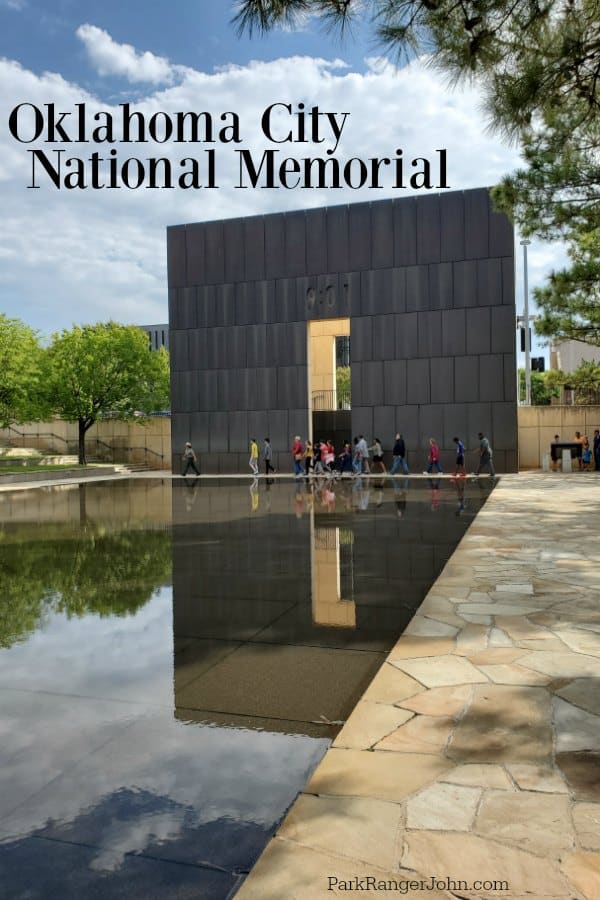 There is a field of 168 empty chairs representing the individuals who passed away from the Oklahoma City bombing and the loss felt by family members.  The chairs are located where the building once stood.

A reflecting pool, a survivor's wall, and an American elm that was damaged in the blast but survived.

The children's area is filled with hand-painted tiles sent by children around the country.

The rescuer's orchard is a grove of trees around the survivor tree.

The outdoor memorial is beautiful while still being poignant and heart-wrenching. This is an area to reflect on what happened and to think about the courage and bravery that led people to run towards the disaster to help people. 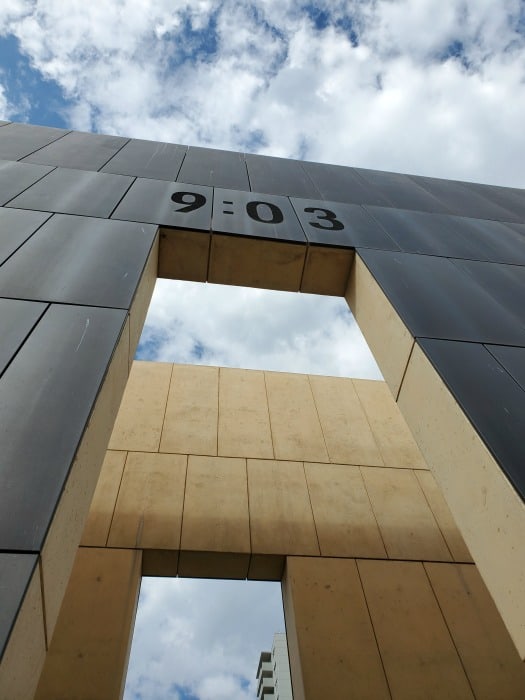 The Gates of Time are found at each end of the reflecting pool. They show the minute before and minute after the bomb was detonated at 9:02 am. 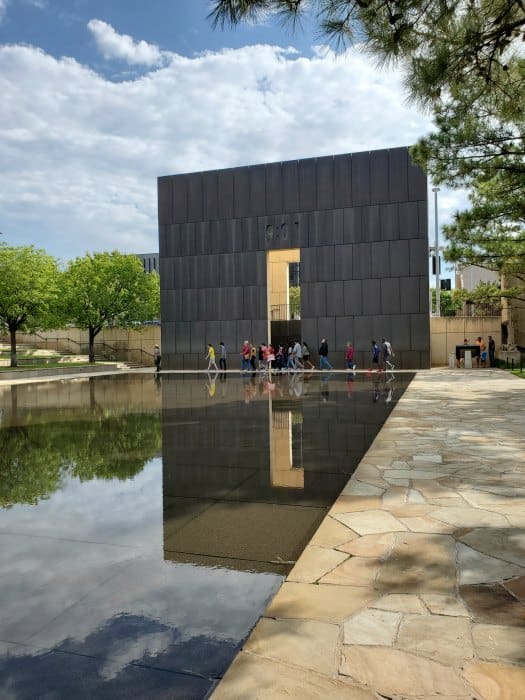 The Reflecting Pool now fills the area that was once N.W. Fifth Street. The water gently moves to provide soothing sounds and comfort while reflecting on what happened. 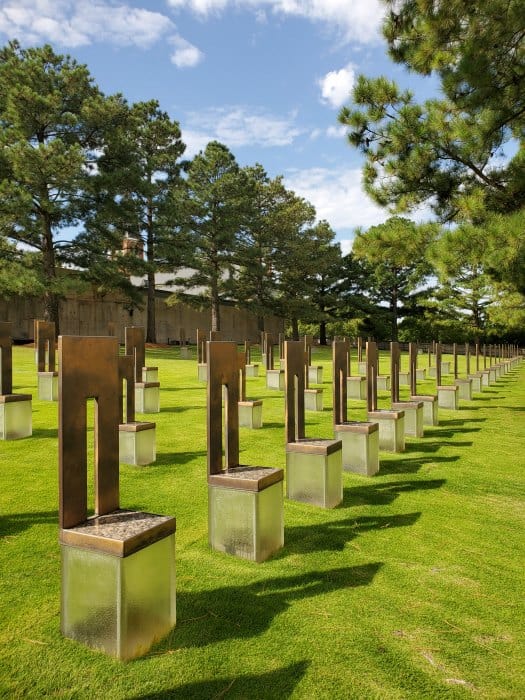 There are 168 empty chairs to represent the lives that were taken on April 19, 1995. The chairs sit in nine rows to designate the nine floors of the Alfred P. Murrah Federal Building.

Each chair shows the name of a victim of the bombing. The nineteen smaller chairs represent the children that were killed in the attack. 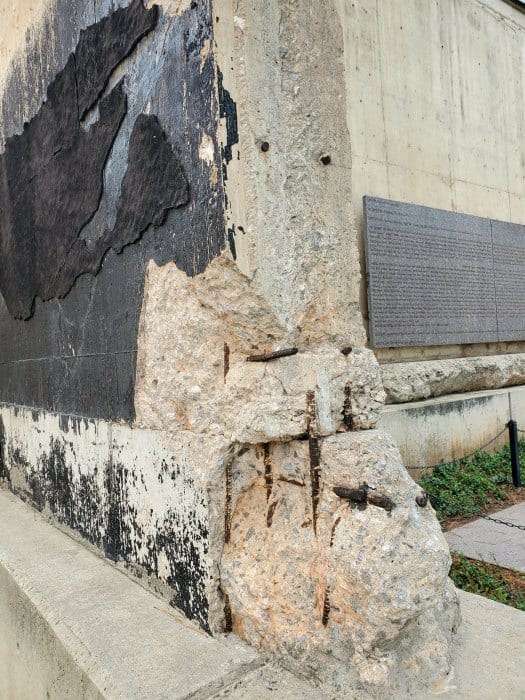 The Survivors Wall is the only wall left standing from the Murrah Federal Building. You can see more than 600 survivor names that have been engraved on a piece of granite from the Murrah Building. 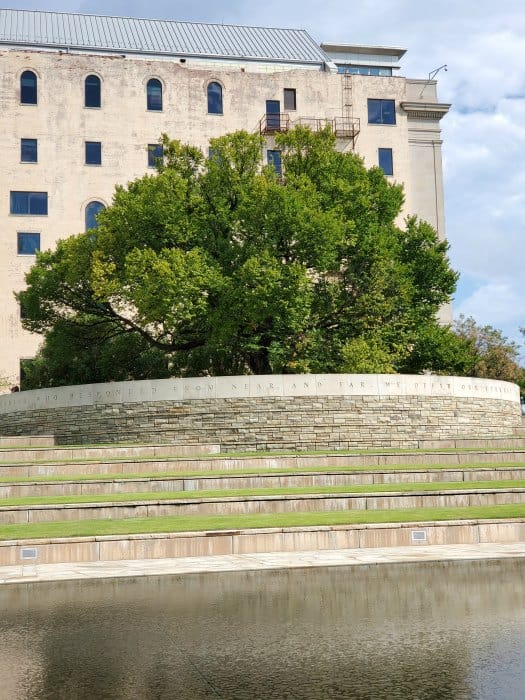 The Survivor Tree is not to be missed! The American Elm withstood the force of the attack and continues to stand today. There is a platform surrounding the tree and interpretive panels about the tree. You can see down over the entire monument from the Survivor Tree.

The tree is a symbol of strength and encourages each of us to grow even with the impact of violence in the world.

The Children's Area is next to the entrance to the National Memorial Museum. You can see tiles that were sent to Oklahoma City by children around the world. 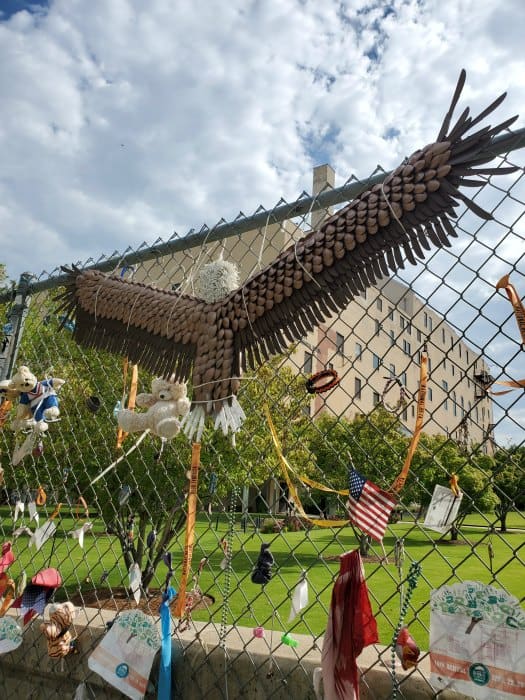 There are still 200 feet of fence standing near the Memorial Museum entrance on the street. People still leave tokens and items to remember those lost and who survived. 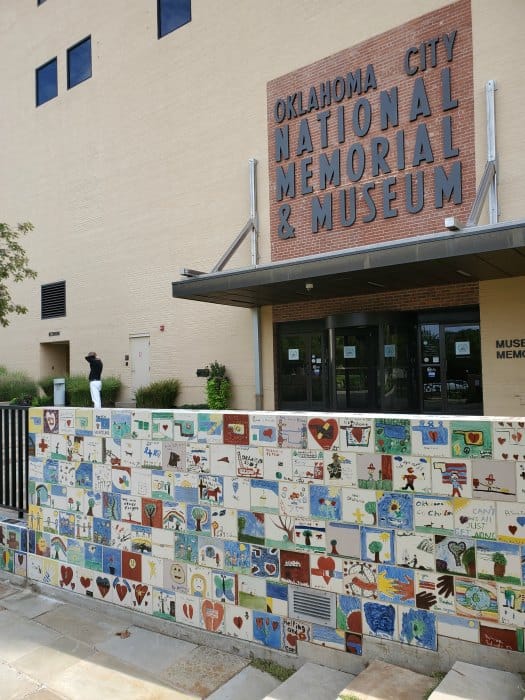 The OKC National Memorial Museum is not part of the National Park Service affiliated site but is part of the complex.

The museum can easily take all day to visit depending on how much time you want to spend. There are hundreds of minutes of videos you can watch, a ton of displays, and interactive displays.

Once you are through this part of the exhibit it is set up like a normal museum or memorial. There are places to sit and soak in what you are seeing.

The museum does an amazing job of showing the impact of the bombing on Oklahoma City, the victims, survivors, and how the world responded to the event. 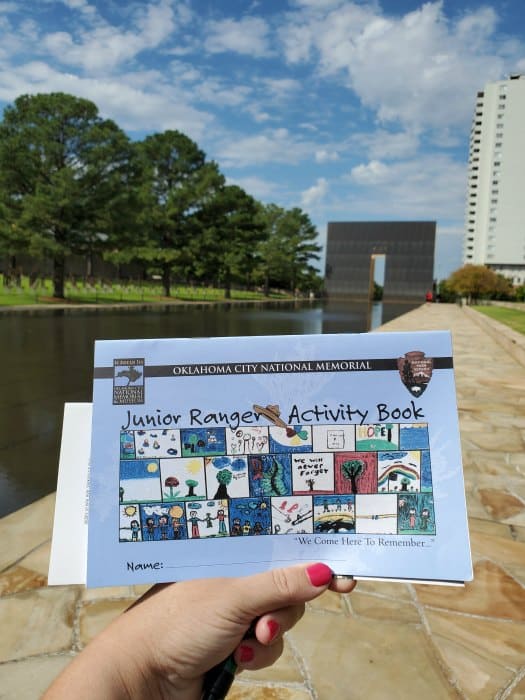 You can pick up a junior ranger program from one of the National Park Service rangers that walk around the grounds. They may have to run into the museum to get one but they can easily make sure you have one or you can download the booklet before your visit.

The Junior Ranger program does a great job of helping kids and adults understand what happened at the site in a way that is not overwhelming or hard to process.

Check out all of the top things to do in Oklahoma City during your visit!

Entrance fee: $0.00, There is no fee to visit the outdoor memorial

Pets: Only service animals are allowed on the Outdoor Symbolic Memorial or in the Memorial Museum.
Pets are not allowed.

Places to eat - My amazing wife wrote this great guide to the best restaurants in OKC divided by district.

Check out all 30 US National Memorials overseen by the National Park Service.