Washita Battlefield National Historic Site is located in western Oklahoma. The 315-acre park protects the location of a Plains Indian Tribe that was attacked.

The conflict between Plains Indians tribes and settlers moving west reached a tipping point in 1868. Attempts to force tribes to reservations led to intertribal battles and rebellion among young warriors even with many chiefs wanting peace. 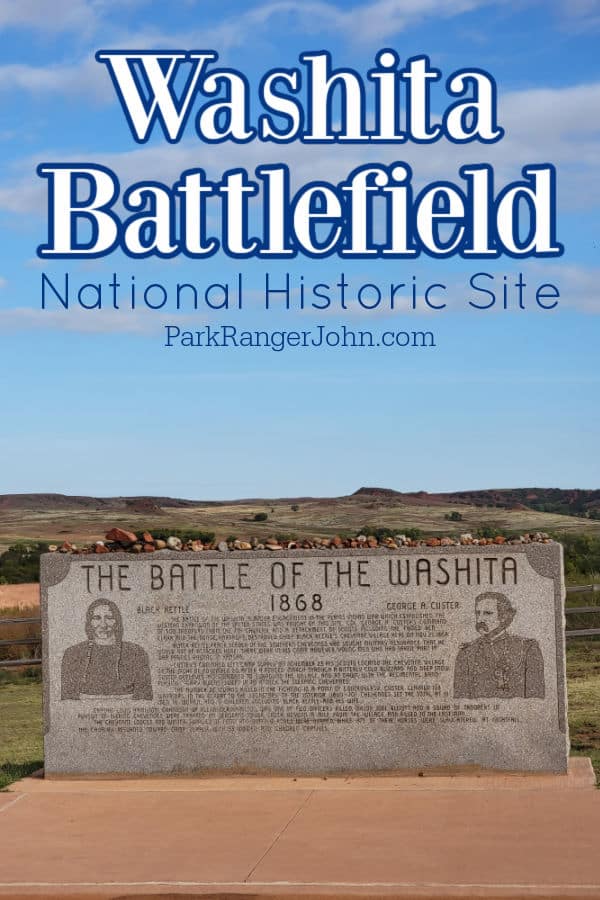 The exact details of the attack and what happened are still being debated. Peace Chief Black Kettle and a number of Cheyenne women and children were killed during the attack in the Washita River Valley.

According to the NPS this is how the battle is described:

The attack on the morning of November 27, 1868, came unexpectedly. Lt Colonel George Armstrong Custer led the 7th Cavalry led the attack with four battalions. Custer attacked straight into the village while other battalions attacked from the northeast and southwest.

The Cheyenne were driven from their lodges barefoot and half-clothed and pursued by the soldiers. Many warriors fought and died during the Battle of Washita.

The village leader Black Kettle and his wife Medicine Woman Later were killed by soldiers while trying to cross the Washita River.

Two hours after lt col George Custer attacked approximately 30 to 60 Cheyenne had passed away in the snow and mud. After the attack, Custer ordered the killing of over 800 animals including village pony and mule herds, and also burned the Cheyenne lodges with all of their winter supply of food and clothing.

This winter campaign attack forced many tribal members to accept reservation life. If they were not safe in cold weather from attack when would they be safe?

You may recognize Black Kettle from also being a part of the Sand Creek Massacre in November 1864. Prior to this attack in 1864 Black Kettle had been pursuing a policy of peace and believed his village was under the US Army protection.

The Treaty of Little Arkansas was signed on October 17, 1865, and the Treaty of Medicine Lodge in October 1867. These treaties said the Cheyenne, Arapaho, and other tribes agreed to stop raiding and settle on reservations in Indian Territory which is now Oklahoma. 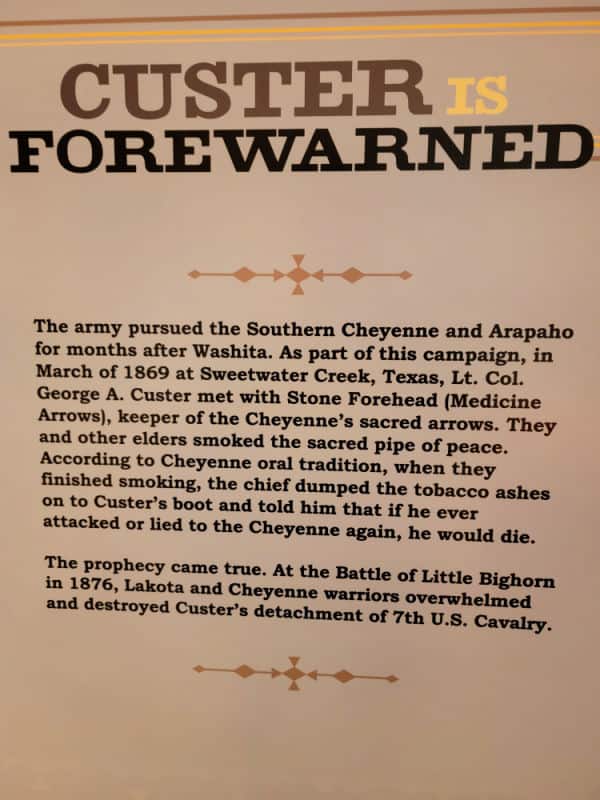 There is an interpretive panel in the visitor center that explains how Lt. Col. George A. Custer met with Stone Forehead who was the keeper of the Cheyenne's sacred arrows in March of 1869. During the meeting, Custer, Stone Forehead, and the other elders in attendance smoked the sacred pipe of peace.

When they finished smoking the sacred pipe of peace the chief dumped the tobacco ashes on Custer's boots and told him that if he ever attacked or lied to the Cheyenne again, he would die.

Washita Battlefield NHS is one of the least visited National Park Sites with less than 25,000 visitors a year. 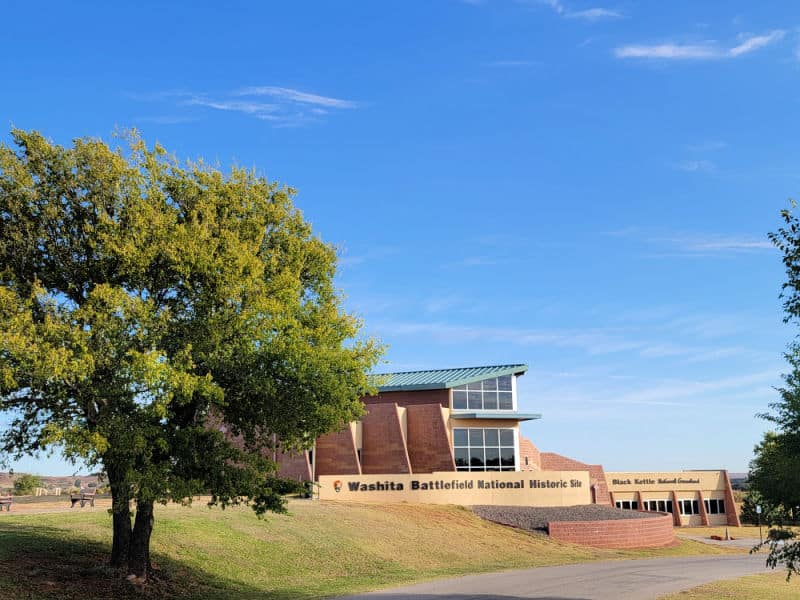 The visitor center is the perfect place to start your visit. There is an amazing array of interpretive displays that explain what happened at Washita Battlefield and the tragic clash of cultures that occurred.

The interpretive panels tell the story from both the Native American voice and the US Army Voice.

27-minute park film focuses on the engagement and the events that led to it. 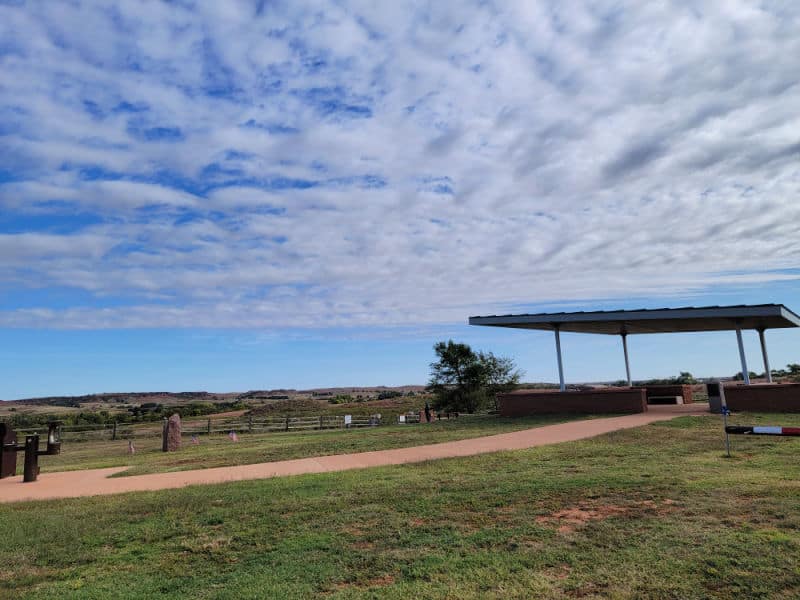 The 1.5-mile trail is self-guided includes 15 numbered stops along the way. You can pick up a trail brochure at the visitor center.

The trail is located just down the road from the visitor center. There is a great parking lot and beautiful views over the park. 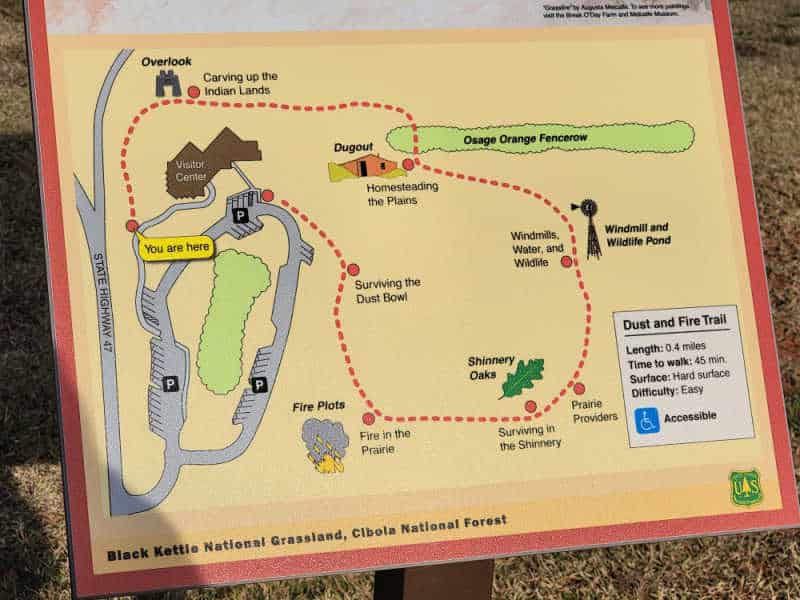 The Dust and Fire Trail

This half-mile trail from the visitor center examines life on the great plains after the land run.

You can download the Junior Ranger program for Washita Battlefield ahead of time if you wish. 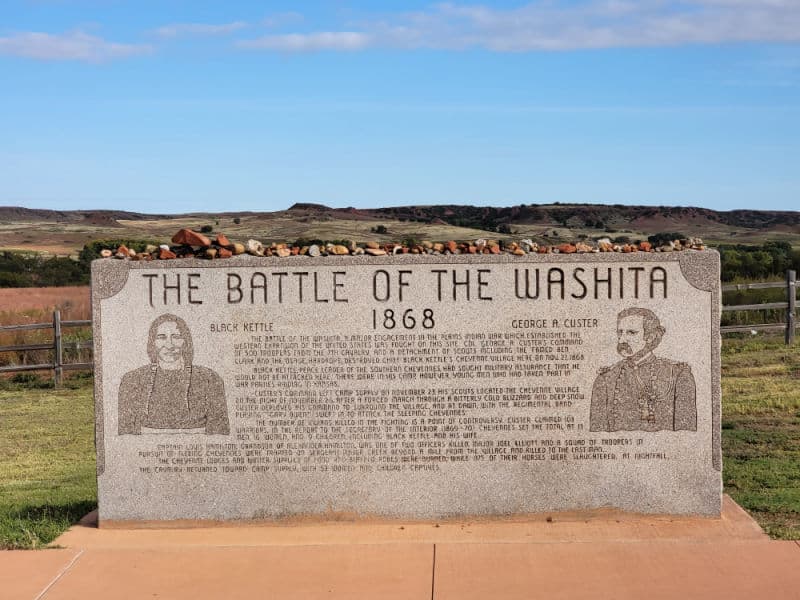 The visitor center is closed on Thanksgiving, Christmas, and New Years Day.

The overlook and trail are open daily from dawn until dusk.

Entrance Fee: $0.00, there is no fee to visit this National Park Site

Pets: Pets are not allowed on the park battlefield trail or in buildings (service animals excepted).

Check out this full printable list of the 63 US National Parks in Alphabetical Order.