Complete Guide to Pipe Springs National Monument in northern Arizona including things to do, nearby camping and lodging, history, and more. 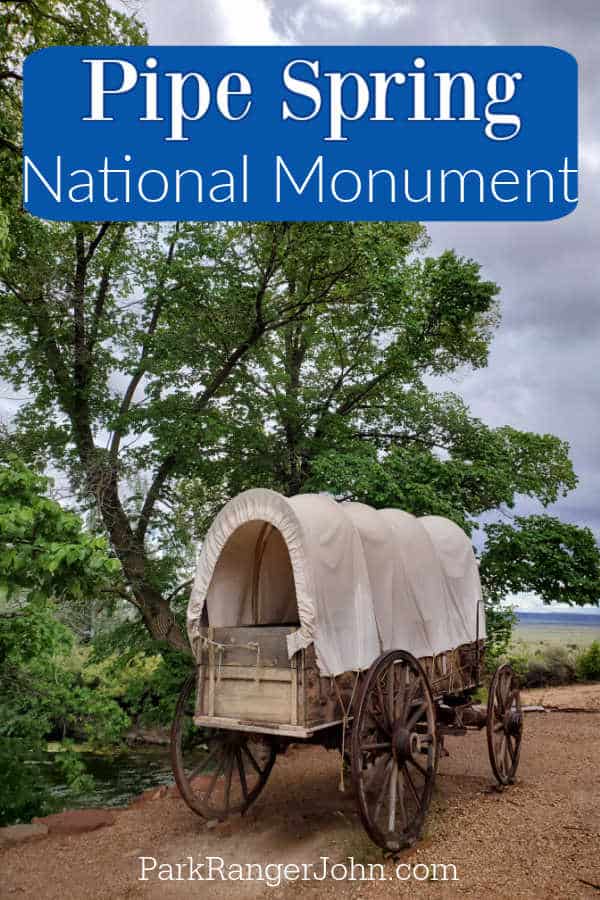 The water of Pipe Spring has long served as an oasis in this dry arid landscape. 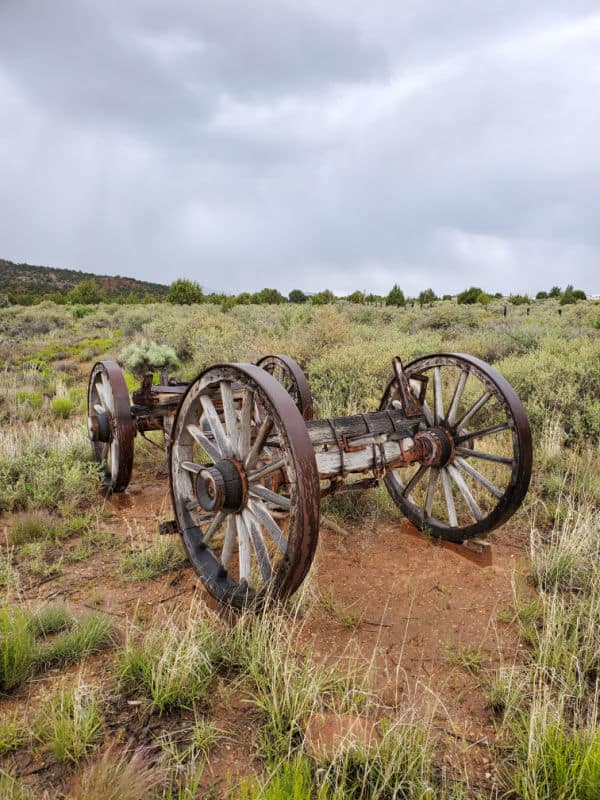 The Kaibab Paiute Indians raised crops, hunted, and gathered grass seeds in this area for at least a thousand years.

Starting in the 1860's Mormon Pioneers moved into the area and established a fort called Winsor Castle.

The Mormon Pioneers established a large cattle ranching operation and place Winsor Castle over the mainspring in 1872.

In 1907 the Kaibab Paiute Indian Reservation was established surrounding the Pipe Spring Ranch. The US government acquired Pipe Spring Ranch in 1923 and set it aside as a National Monument run by the National Park Service.

Pipe Springs National Monument just squeaked by from being on the Least Visited US National Parks List with 25,179 visitors in 2018. We cut the list off at 25k and less so they just made it past the list. LOL!

Yes, The park shares history that we had never heard of before visiting. It is a really interesting site that provides more insight into US history and religious history. 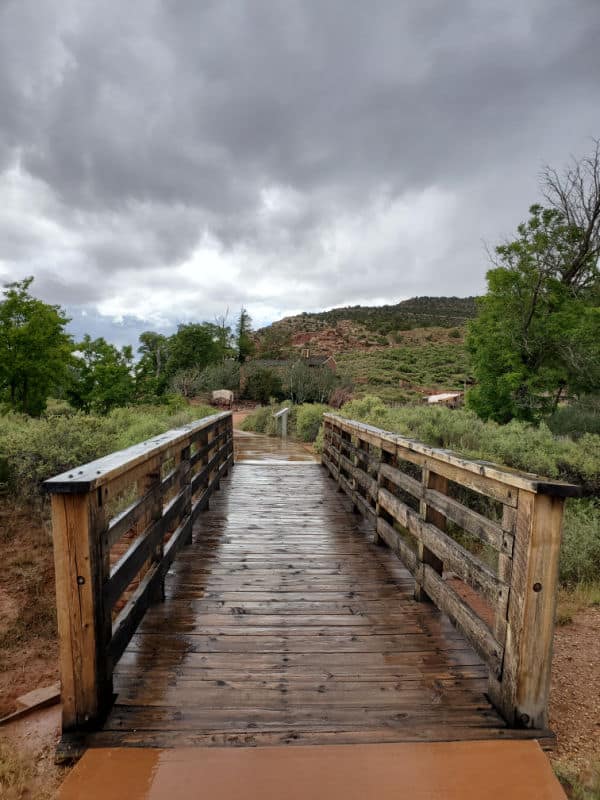 The area of Pipe Springs was home to the native Paiute Indians until members of the Church of Jesus Christ of Latter Day Saints began settling the area in the 1850s.

There is evidence that more than a thousand years ago the semi-nomadic hunters and gatherers, the Pueblan Anasazi, lived in the area.

Between 1000 and 1250 there was a great drought and it is believed that the area just could not support a tribe of the Anasazi’s size.

After about 1300AD the semi-nomadic Kaibab Paiutes arrived in the area.  This group was better in tune with using the resources of the area.

They were able to farm maize and beans around the flowing springs and moved to follow game like deer, rabbits, and pronghorn.  They gathered nuts, roots, and cactus fruit.

By the 1870s, their numbers had declined from nearly 5,000 to 200 after Navajo raids and diseases brought by European settlers plagued the area.

The first Europeans to pass through Pipe Springs were Catholic Fathers Francisco Dominguez and Silvestre Veliz de Escalante while on an expedition through New Mexico, Arizona, and Utah in 1776.

It is believed that had it not been for the natives the Priests would certainly not have returned from that expedition.

As the Priests stopped through the area, the natives gave them food and pointed them toward the safest routes to follow.

In the late 1850s, the Mormon Church based in Salt Lake City, UT, and nearby, were calling on members to branch out and settle in southern Utah.  Some went further and ended up in Arizona.

It was not long before Mormons had taken control of the land and the springs where the Paiutes had long-lived.

In 1863, James Whitmore was the first white settler to move livestock to the area.  Whitmore built corrals and planted orchards; his livestock numbers soon grew.

During the 1860s, Navajo tribes raided these livestock corals, including one raid which killed Whitmore.

The Mormon and Navajo tension grew from there and attacks took place back and forth.  In 1868 a stone building was built as a stronghold against the Navajos.

This large ranch at Pipe Springs was the idea of the second Mormon Church leader Brigham Young.

His predecessor, Joseph Smith, was the founder of the Mormon Church, or the Church of Jesus Christ of Latter Day Saints.

Giving ten percent to church officials was the Mormon tradition and was often done by offering livestock to the church.  Young decided that a “tithing ranch” was a smart business decision.

He bought the Pipe Springs area land from James Whitmore’s widow and hired Anson Perry Winsor as the ranch manager.

Winsor and Young built courtyards surrounded by gates to keep safe to them the many springs in the area.

A room was maintained where the cold springs ran which kept the temperature around 48 degrees.

This room helped in storing the dairy and making butter.  Gun port windows were added to the structure to defend against native attacks but the windows were never used.

During the 1870s, the Pipe Springs area consistently grew.

Pipe Springs was often referred to by Mormons as “The Honeymoon Trail” because couples often stopped there on their way to or as they were leaving their marriage ceremonies in the Mormon temple at St. George, Utah.

Young’s ranch now included dairy cattle and the Mormon establishment even served as a hideout for many years.

In the 1880s and 1890s, the longstanding tradition of polygamy in the Mormon Church was gaining negative attention, and wives of polygamists were hiding from Federal Marshals at Pipe Springs to save their husbands from persecution.

The addition of the Mormon livestock operation greatly impacted the Paiutes ancestral home.  It affected their hunting, gathering, and farming lands.

Overgrazing my large numbers of livestock coupled with droughts throughout the years led to starvation.

In 1907, federal concern for the Paiute natives led to the creation of the Kaibab Paiute Reservation which included a small portion of their ancestral lands.

The Mormon ranch was still located in the center of Pipe Springs, which was now surrounded by the Reservation.  For many years, conflicts regarding water rights ensued between the Mormons and Paiute nation.

The ranch was sold in 1923, and soon after, two months before his death, President Warren G. Harding created the national monument that is Pipe Springs.

Its intention was to showcase pioneer life and the tools and technique used on the ranch for livestock and dairy production.

The National Park Service showcases the ranch to visitors as it looked in the 1800s and offers demonstrations of pioneer activities. 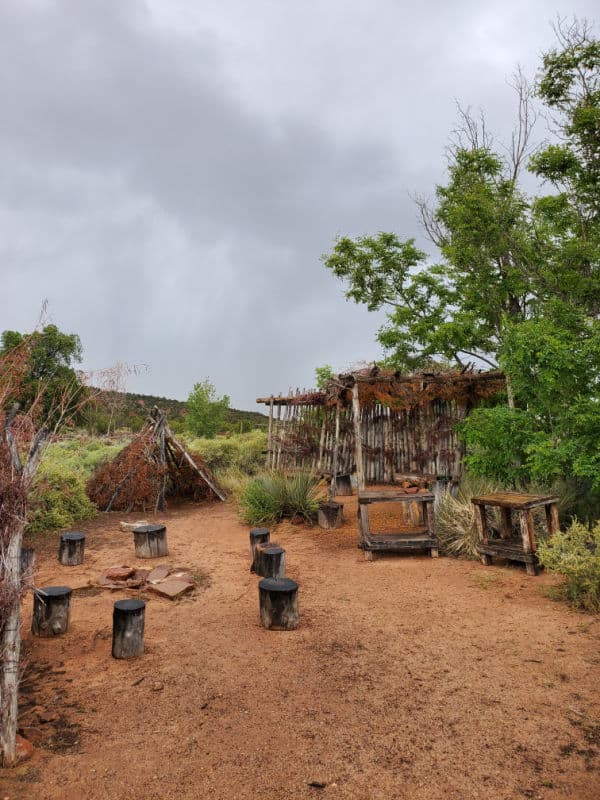 Things to know before your visit to Pipe Spring National Monument

Children 15 and under are admitted for free.

The state of Arizona does not observe Daylight Savings time. In the summer, it is an hour earlier than in Utah.

Pets must be on a leash at all times. Pets need to remain on sidewalks.

Cell service is spotty to non-existent at the visitor center.

No Wi-Fi is available in the park.

There is a nice size parking lot next to the visitor center.

During our visit we were able to get these stamps:

There are 12 EV Charging stations within 10 miles of Fredonia, Arizona. 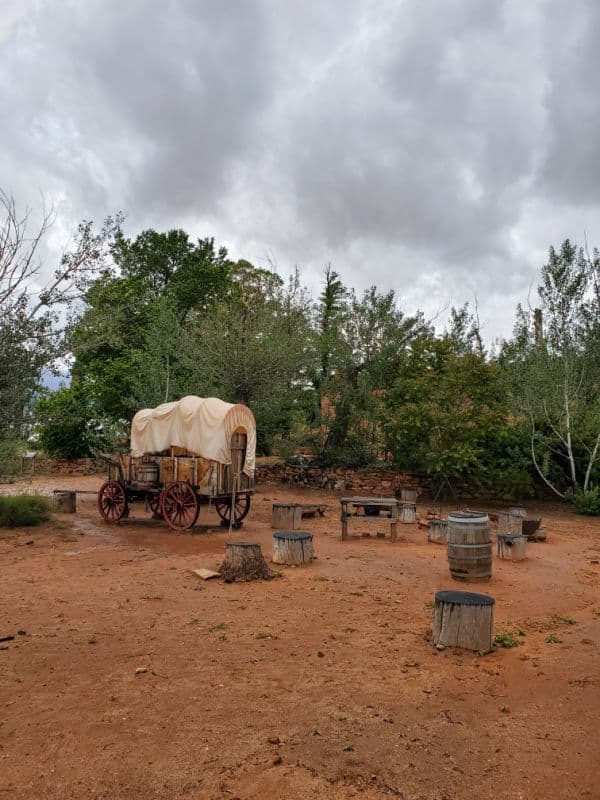 Check out how Pipe Springs NM compares to other National Parks by Size. 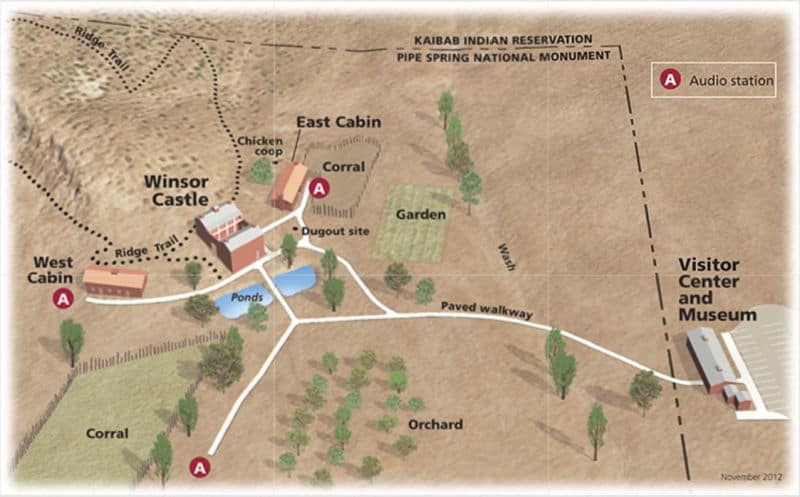 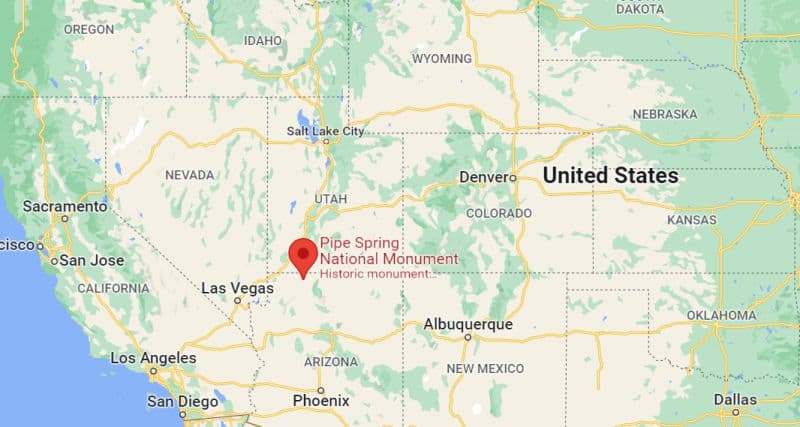 Where is Pipe Spring National Monument?

The monument is eight miles south of Utah's southern boundary

The visitor center is located at the main entrance to the park. 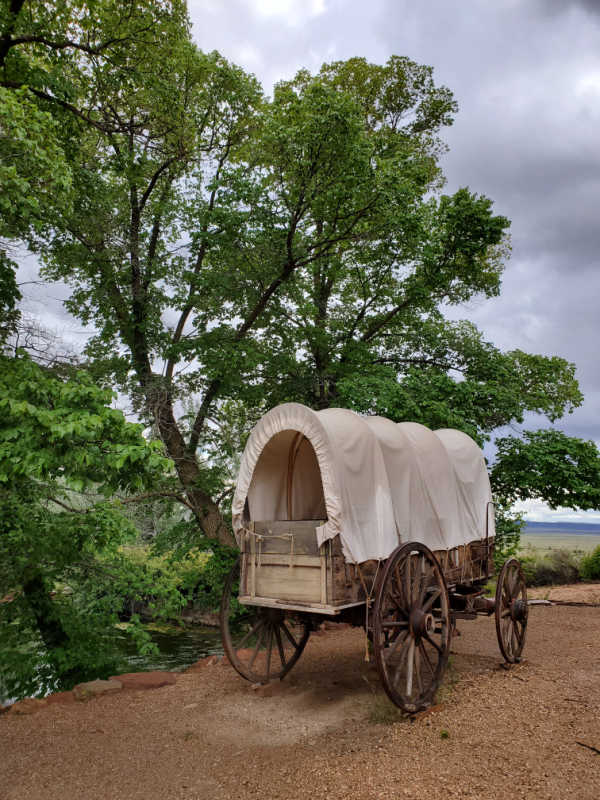 Getting to Pipe Spring National Monument

This road turns into Arizona State Route 389 at the state line. Pipe Spring is 45 miles east of Hurricane.

From Utah Highway 89 and 89A, turn onto Arizona State Route 389 in Fredonia, Arizona. Pipe Spring is 15 miles west of Fredonia. 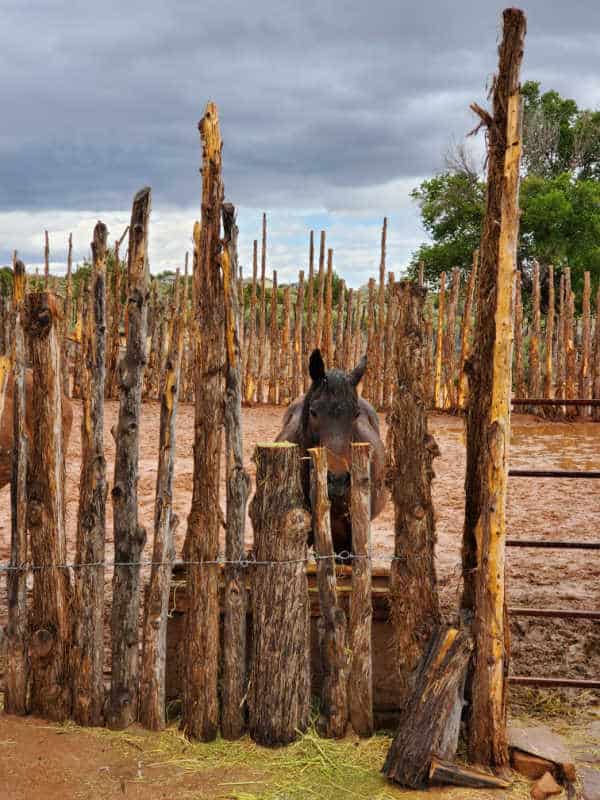 For cooler temperatures the best time to visit is spring and fall.

The hottest months are from June 2 to September 14th when the average temperature is above 84 degrees.

The coldest months are from November 21 to February 27th with an average daily temperature below 56 degrees.

August receives the most rain with an average over 1 inch.

Snow is possible from December 28th from February 24th on average with at least an inch of snow. 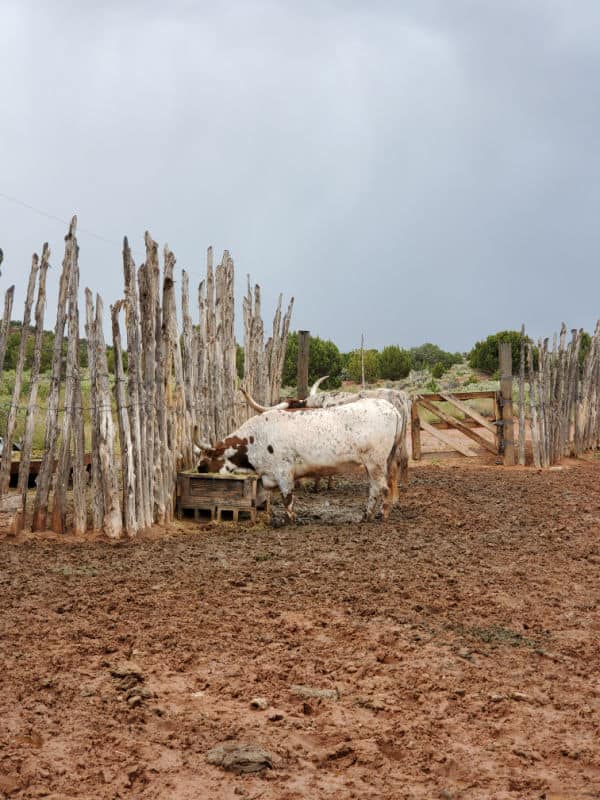 Best Things to do in Pipe Spring National Monument

We suggest planning a half a day to visit Pipe Springs NM! Between walking around the grounds, visitor center, and taking a tour you will need at least a few hours.

The visitor center and museum have displays on both the Kaibab Band of Paiute Indians and the Mormon Settlers.

Don't miss the park movie! We ended up watching it almost twice it was so good. We wanted to make sure we didn't miss any of it.

The movie does an amazing job detailing the history of the area and how/why the Mormon pioneers ended up in the area. 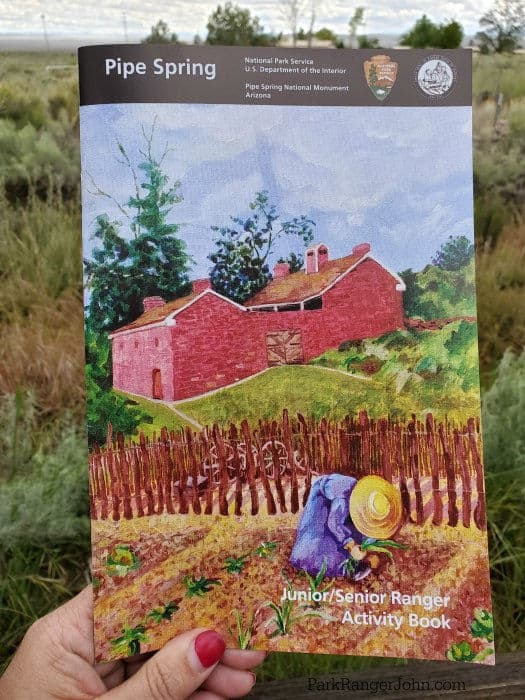 The Pipe Spring NM Junior Ranger program can be completed during a visit to the visitor center and by walking the grounds. It is a great way to learn more about this fun park.

Stop at the Visitor Center and pick up a Pipe Spring Junior Ranger booklet, or download one here. The park only offers Junior Ranger Badges while in the park, they are unable to mail badges.

The grounds have a great paved trail that leads you around the historic fort. Don't miss the longhorn cattle and horses. You can see the water source that drew the American Indians, and Mormon ranchers to the area.

Don't miss the plants, animals, and interpretive panels talking about what happened along the Arizona strip.

If you are visiting during warm weather make sure to watch the trail for rattlesnakes and other desert friends.

Guided ranger tours of Winsor Castle every hour. You can find out more about them at the visitor center's main desk.

During the summer there are demonstrations of Indian and pioneer life including crafts. 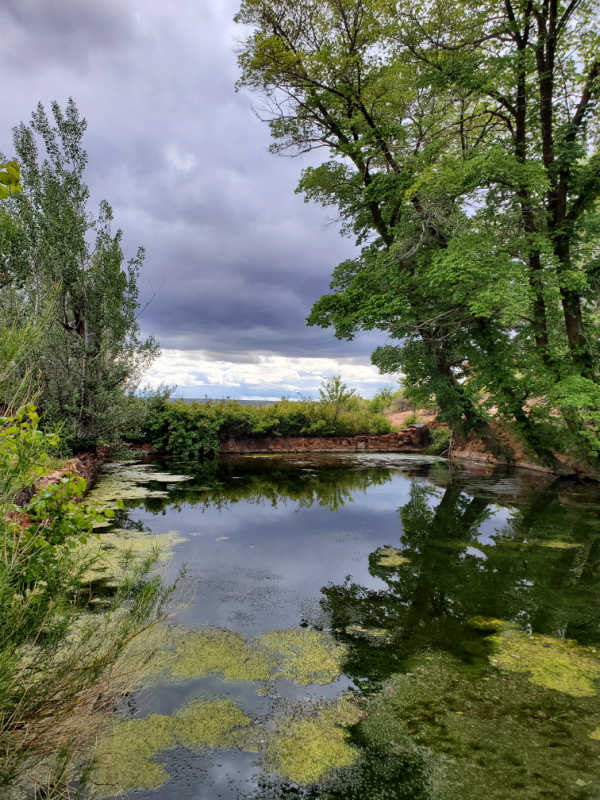 A half-mile walking trail that takes you uphill a little bit and provides a great view over the park. 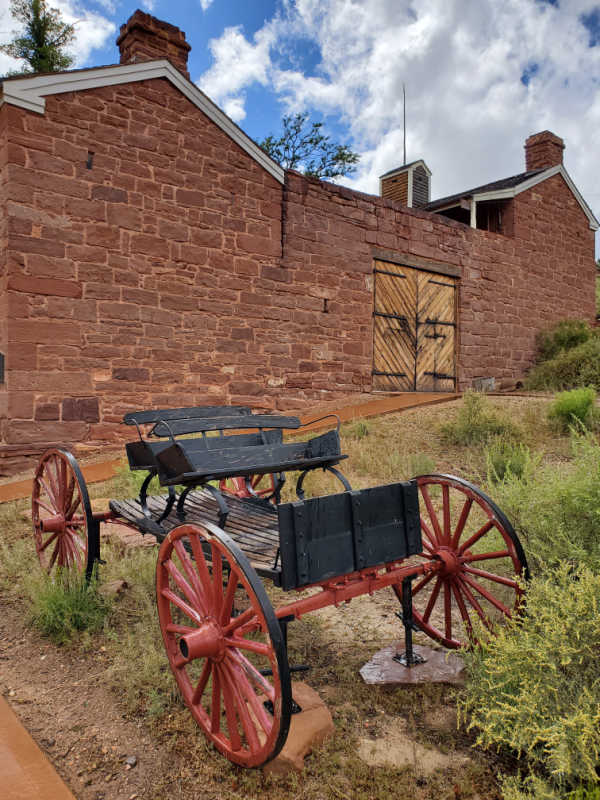 How to beat the crowds in Pipe Spring National Monument?

We did not experience any crowds in the park. We do suggest visiting during the week if you want to visit when there are fewer people.

Where to stay when visiting Pipe Spring National Monument

There are no campgrounds within the park. There are campground nearby including:

This campground offers RV and Tent Sites, a dog park, and more.

This campground offers RV Sites, a pool, and a dog park.

This campground offers RV sites, fishing, a restaurant, and more. 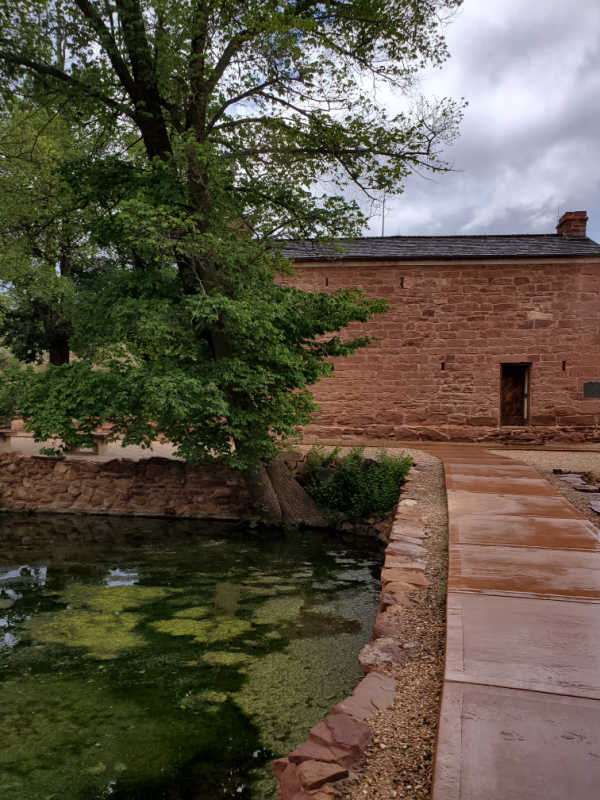