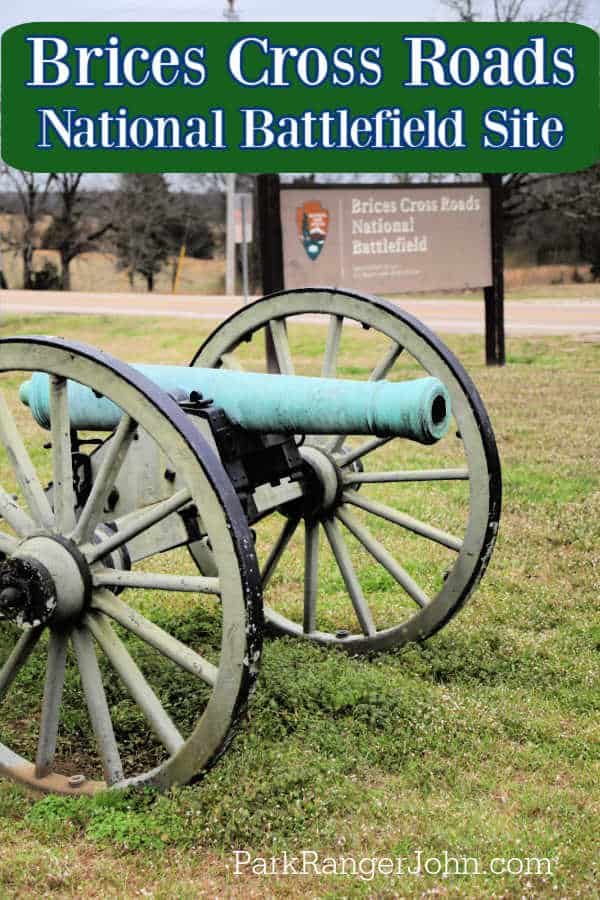 Within the battlefield, there are two interpretive trails describing both the Union and Confederate sides of the battle.

In 1864 Union Major General Sherman began his march to the sea during the Civil War.

This march was dependent on supplies that were moved on the rail line from Nashville to Chattanooga, Tennessee. General Sherman knew the line was vulnerable to attack by Confederate troops so he sent troops to northern Mississippi.

A battle took place on June 10, 1864, at Brices Cross Roads. The battle was a southern victory but the outcome was positive for the Union cause.

There are no visitor facilities at the site.

The site is SMALL!!

There is more in-depth information available at the Mississippi Final Stands Interpretive Center located near the intersection of U.S. Highway 45 and Mississippi 370, in Baldwyn, Mississippi.

The center is open from 9 a.m. to 5 p.m. Tuesday through Saturday. 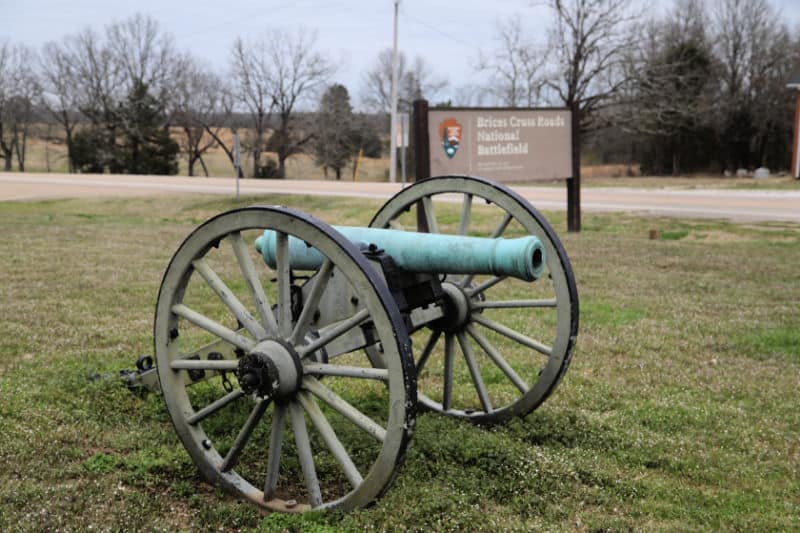 This park is a ways out from most places. If you are a huge fan of American Civil War sites than you will find it really interesting.

If you are a general park visitor this may not be the park you love.

There is not a lot of infrastructure for the park so you will be viewing the site but need to drive to the visitor center for any information.

The battle, fought over control of the Nashville and Chattanooga railroad, was a Confederate victory. The Confederates were victorious despite being outmanned and outgunned by the Union.

The Battle of Brice’s Cross Roads occurred when the Confederate forces under Gen. Forrest attempted to sabotage the Union supply line.

The supply line played a pivotal role in Gen. Ulysses S. Grant’s plan to defeat the Confederates for good in 1864. Gen. Grant sent his most trusted General, William T. Sherman into Georgia.

Sherman, fearing an attack on the railroad by Gen. Forrest, ordered Union forces under the command of Gen. Sturgis to march from Memphis, Tennessee.

Sturgis was to make sure that Sherman's supply line was not destroyed or harassed by the Confederates by occupying Forrest in Mississippi.

The Battle in Context

General Ulysses S. Grant had recently been appointed head of the entire Union Army. It was now up to him to defeat the Confederates and end the Civil War.

In the Overland Campaign, Grant pursued Lee with the intent of destroying Lee's forces and capturing the Confederate capital, Richmond.

He sent Sherman to defeat Johnston in Georgia and, if possible, bring the second biggest Confederate stronghold of Atlanta under Union control.

To be able to do this, Sherman needed to be able to receive supplies via the Nashville and Chattanooga railroad.

The destruction of the railroad would make Sherman’s advance down to the coast impossible, which would have had serious consequences on the Union's ability to win the war.

The March from Memphis

Towards the end of May, Sherman was moving further into Georgia. He became concerned that Confederate Gen. Forrest would attack his supply line.

To ensure the success of his Atlanta Campaign, Gen. Sherman ordered Gen. Sturgis to march from Memphis, Tennessee, with over 8000 men. The objective was to keep Forrest occupied and, if possible, destroy his army.

As it happened, Sherman was right about Forrest’s intentions. Forrest had to turn back from his march towards Middle Tennessee, to engage with the Union and protect Northern Mississippi.

Sturgis made his way into Northern Mississippi, intending to destroy Confederate supply lines and Forrest's forces.

Sturgis targeted the Mobile and Ohio railroad first. The railroad ran through Tupelo, Mississippi, so Sturgis went there. Forrest confronted him just 20 miles out of Tupelo at Brice’s Cross Roads on June 10th, 1864. 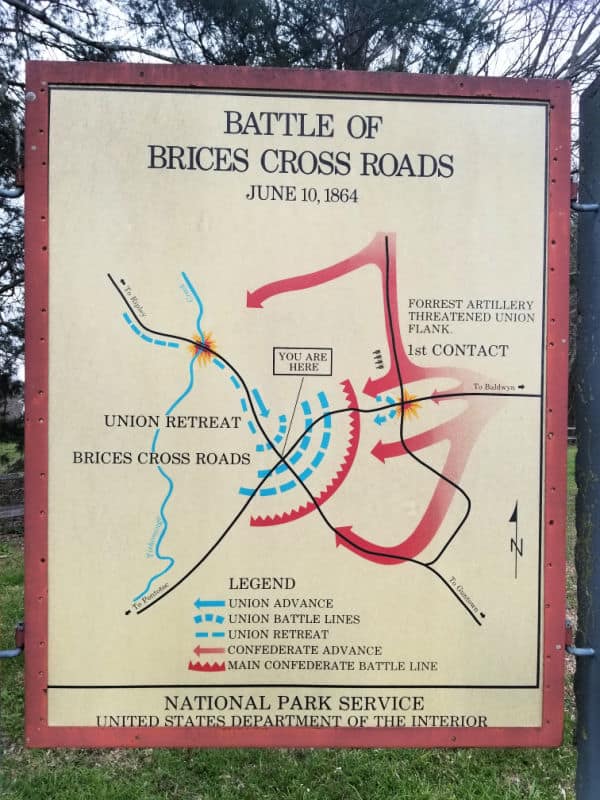 The Battle of Brice’s Cross Roads

On the morning of June 10th, Forrest and his Cavalry of 2000 men were confronted by the first Union division, and the Battle of Brice’s Cross Roads began.

Forrest sent one division to engage the first Union column while the rest of his forces made their way to the battle.

Despite being outmanned by the Union, Forrest used his men to his advantage, managing to push the first Union Division back.

Sturgis sent in more men. Forrest simultaneously attacked the Union line from the left and the right while focusing his artillery fire on the middle.

Forrest attacked the Union defenses on the Tishimongo Creek bridge to Sturgis's rear that afternoon.

The Battle of Brice’s Cross Roads was a tactical triumph for Major General Nathan Bedford Forrest. His 2000 strong infantry had beaten back over 8000 Union soldiers, successfully defending Northern Mississippi from the Union advance.

An estimated 1600 of the retreating Union soldiers were taken prisoner by the Confederates and over 2000 were wounded or killed during the battle.

Speculation on why Sturgis failed at the Battle of Brice’s Cross Roads ranges from Sturgis being drunk during the conflict, to the conditions of the field, to the Union soldiers lacking strength due to hunger.

The Battle of Brice’s Cross Roads, although a Confederate victory, had in essence, done what Gen. Sherman needed it to do.

It had occupied Forrest while Sherman continued his push to Atlanta. However, after his abject failure to defeat Forrest despite having superior numbers, Sturgis was relieved of his command.

Brices Cross Roads is an excellent example of winning the battle but losing the war.

Today the site of the battle has been preserved at The Brice’s Cross Road’s National Battlefield Park. The battlefield is one of the most well-preserved battlefields from the Civil War. 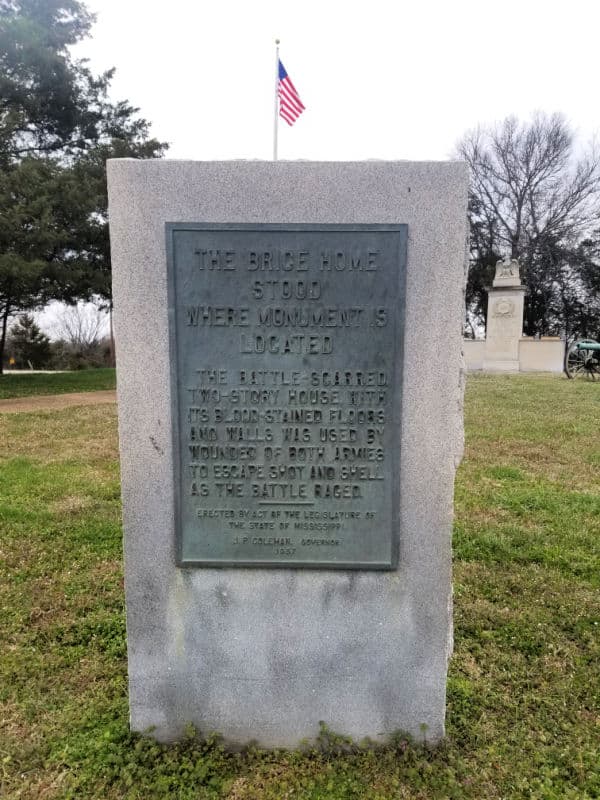 Pets need to be on a leash less than 6 feet in length.

We had very little cell service at the park. If you are using GPS on your phone make sure you have your next stop loaded before you lose service.

We had to make a gut decision and head down a road in hopes that it took us to the main road.

There is no Wi-Fi available in the park.

There is parking near the monument.

There is no gas station available within the park.

There are 5 EV Charging stations within 30 miles of Guntown, MS. 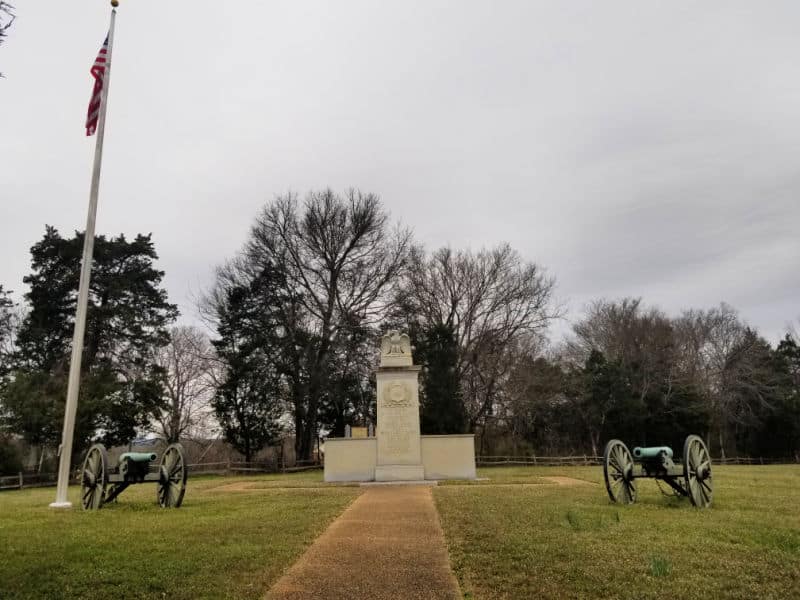 On August 10, 1933, the park was transferred to the National Park Service.

The park does not have visitor statistics available. 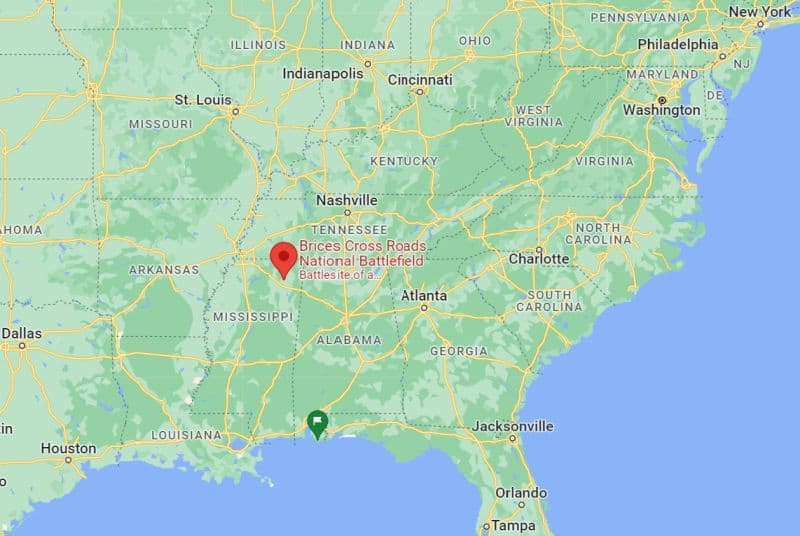 Brices Cross Roads NBS is located in northeastern Mississippi near the border with Tennessee.

The Natchez Trace Parkway Visitor Center is open every day from 8:00 am to 5:00 pm (Central Time) except December 25.

Brices Cross Roads NB is administered from this visitor center. 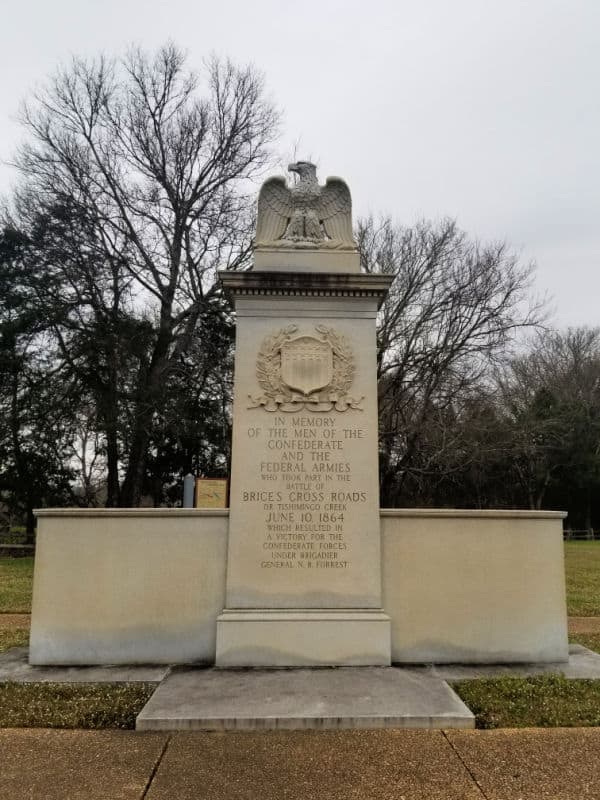 Exit U.S. Highway 45 onto Mississippi highway 370, in Baldwyn, Mississippi. The battlefield is located 6 miles west of Baldwyn, on Mississippi 370. 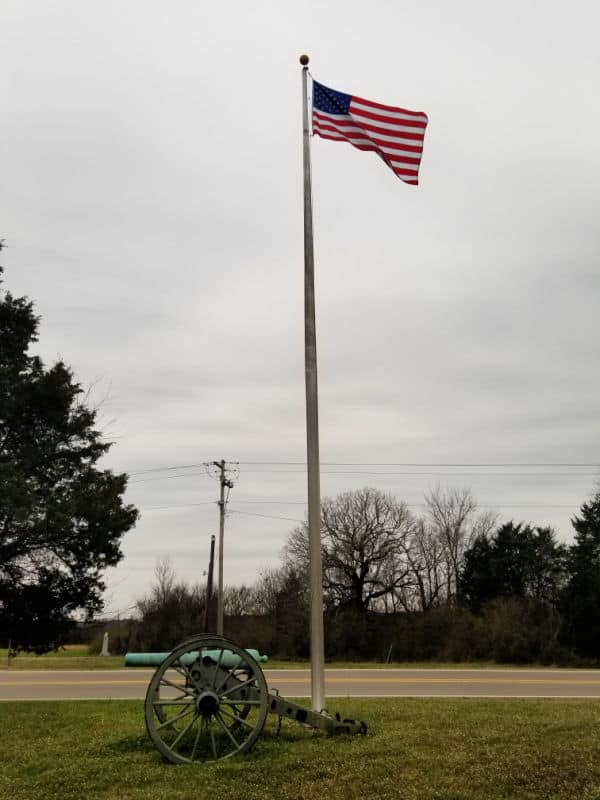 The best time to visit Brices Cross Roads NB is Spring and Fall when the weather should be comfortable.

The hottest weather is from May 25 to September 22 with an average daily high above 83 degrees.

The coldest weather lasts from November 28 to February 24th with an average daily high temperature below 60 degrees.

December receives the most rain with 5.2 inches of rain. January receives an average of 1.3 inches of snowfall.

The muggiest weather is from May 12 to October 2nd. 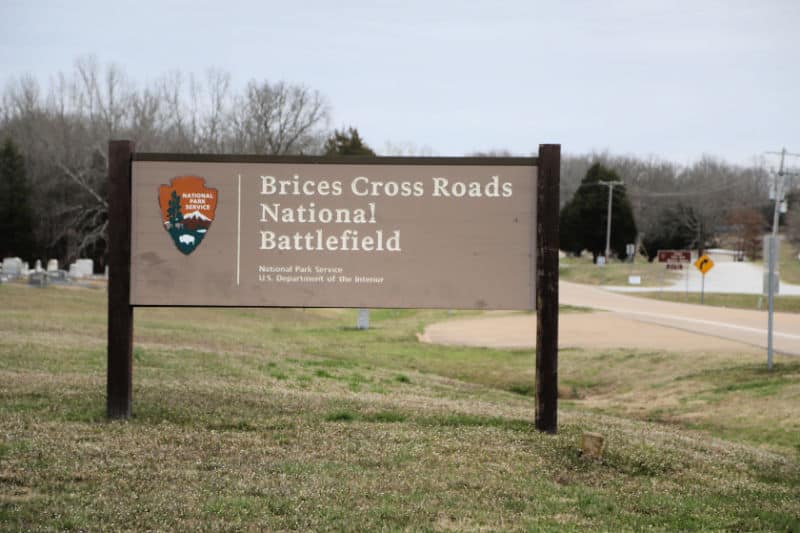 We suggest planning a couple hours to visit Brices Cross Roads NBS especially if you are heading to the visitor center.

The actual park site does not take that long outside of the drive to get there.

The battlefield site is a 1-acre area preserved to commemorate the battle.

Since this 1-acre area has been preserved the Brice's Crossroads National Battlefield Commission has purchased an additional 1600 acres.

The Mississippi Final Stand Interpretive Center in Baldwyn shares exhibits and films about the Battle of Brice's Crossroads and the Battle of Harrisburg/Old Town Creek.

It is $5 for adults and free for children. The center is open Tuesday to Saturday from 9 am to 5 pm.

The interpretive center is not a National Park Service site but does have a lot of information about the Battle of Brice's Crossroads. 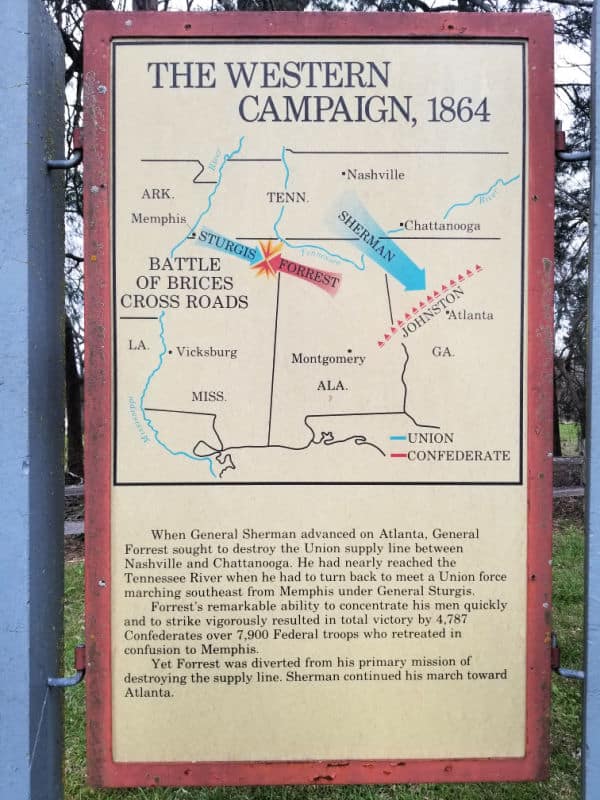 How to beat the crowds in Brices Cross Roads National Battlefield Site?

We did not see another visitor during our time in the park.

Where to stay when Brices Cross Roads National Battlefield Site

The majority of lodging is in Tupelo, Mississippi including:

Click on the map below to see current rates for additional hotels and vacation rentals in Tupelo, Mississippi.

Here are a few campgrounds you can find in the area.

Check out other campgrounds in the area on CampSpot.