Tupelo National Battlefield is located in the heart of Tupelo, Mississippi. On July 14th and 15th in 1864 Union and Confederate troops battled at what became known as the Battle of Tupelo. 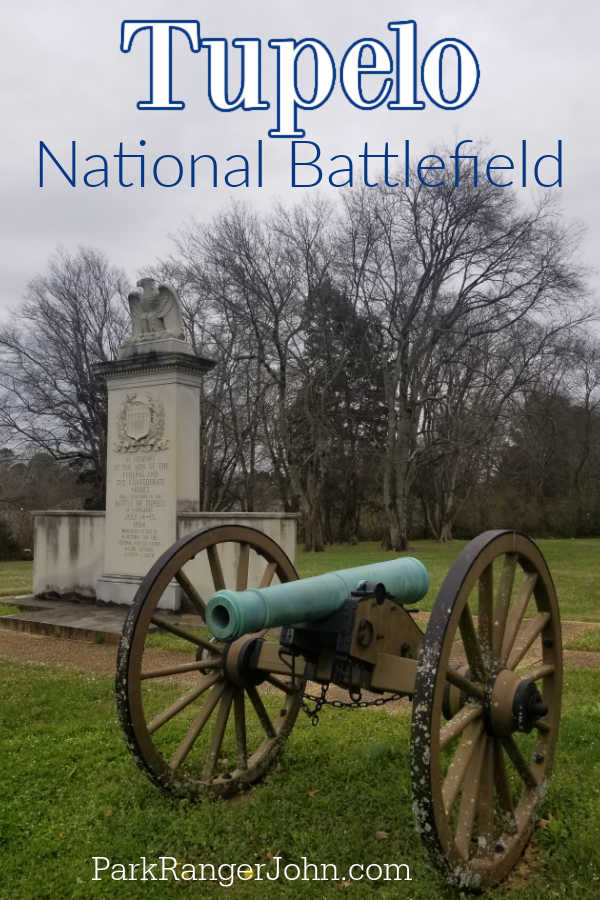 This park is not large! It is located on about an acre of land next to a car wash and restaurants. The site includes a large monument, a couple of cannons and grave markers for soldiers in the battle.

There used to be interpretive panels but the park service had to remove them due to damage and graffiti. They are hoping to replace the signs at some point soon.

When we visited the park the grass was pretty tall and wet. If you plan on walking around the park make sure you have comfortable shoes that can get dirty. 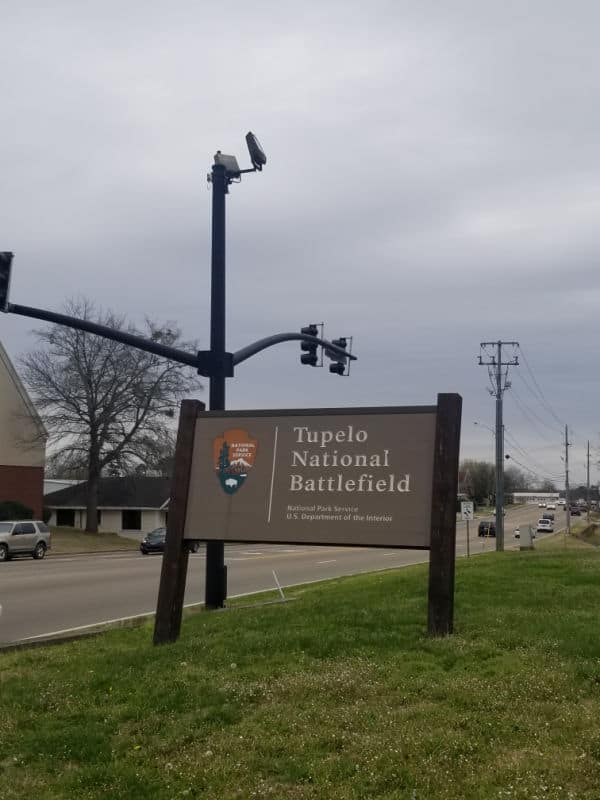 Tupelo National Battlefield protects the site of a Civil War battle that occurred in July 1864.

Union Forces including men from the United States Colored Troops marched into Tupelo, Mississippi to protect the Union Railroads in Tennessee.

This National Battlefield is located in Tupelo surrounded by urban development. It is a small site that reminds us of the battles that were fought for freedom.

Is Tupelo National Battlefield worth visiting?

Yes especially if you are already in the area. The park is SMALL! 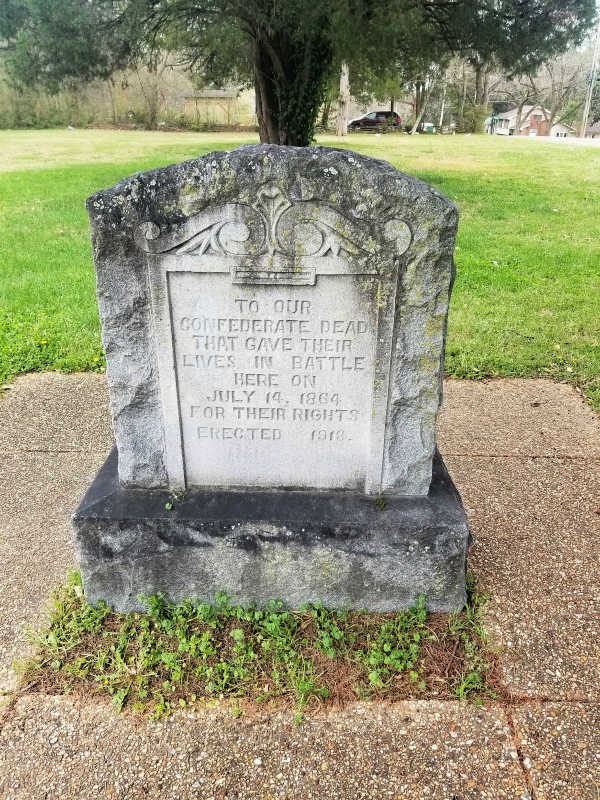 The Tupelo National Battlefield preserves the site of the Battle of Tupelo, where 1500 men died in action during the Civil War.

The battle was fought on July 14 and July 15, 1864, lasting for two days, and was the last major battle of the Civil War to be fought in Mississippi.

The Battle of Tupelo, also referred to as the Engagement at Harrisburg, was a fight for the control of the Union railroads supply line in Middle Tennessee.

The Union could not afford for the Confederates to attack the supply line, as General Sherman relied on it to continue his advance to Atlanta.

The Battle of Tupelo was fought by the Union troops Right Wing, 16th Army Corps, under the command of Maj. Gen. Andrew J. Smith.

The Confederates were under the command of Lieutenant General Stephan D. Lee and Maj. Gen. Nathan B. Forrest. Continuous but poorly organized Confederate attacks were successfully repelled by the Union.

The Battle in Context

The Battle of Tupelo took place in the Western Theater of the American Civil War to aid Gen. Sherman in his campaign to take Atlanta.

Sherman's Atlanta Campaign began in May 1864, made possible by the Union victory at Chattanooga, which opened the Deep South to a Union Advance.

Much of Mississippi was already in Union control by July 1864, as was much of Middle Tennessee.

Sherman still feared that the Confederates would strike the railroad line that cuts through Middle Tennessee down to the Coast. A Confederate attack on the railroad would doom Sherman's march to Atlanta.

Before engaging at Tupelo, the Confederate Gen. Forrest had successfully defeated the Union at the Battle of Brice’s Crossroads in June.

Sherman planned to keep Forrest occupied with engagements and skirmishes in Northern Mississippi so that he could not push into Middle Tennessee.

The Battle of Tupelo

As Gen. Smith made his way from Tennessee, Forrest was in Okolona with 6 000 men, awaiting reinforcements from Gen. Stephan Lee.

Lee had instructed Forrest not to engage the Union forces nearby until he had received reinforcements.

Fearing a Confederate ambush at Pontotoc, Mississippi, Smith moved his forces toward Tupelo. Here, Smith created strong defensive entrenchments near Harrisburg, ensuring his forces would be ready when the Confederate attack finally came.

On July 14th, 1864, Lee and Forrest attacked the Union forces. The attacks on the Union defensive line were, by all accounts, disorganized but ferocious.

Each time the Confederates attacked, the Union beat them back. The Union inflicted heavy casualties on the Confederate forces, including wounding Gen. Forrest.

By the afternoon, the Confederates had fallen back and were entrenching themselves on the opposite side of the battlefield. There was minimal engagement after nightfall. The Union concentrated instead on destroying the town of Harrisburg and the railroad there.

On the morning of the 15th, the Confederates once again tried to break through the Union line, but they failed.

Despite this, Smith decided to withdraw from his defenses at Tupelo and retreat to Memphis. Smith stopped the march in the afternoon. Running low on food and ammunition, they made camp at Old Town Creek.

Smith's retreat was not due to the Confederate attacks but rather his dwindling supplies. Smith was confident that he had inflicted enough damage on the Confederate forces that they would be unable to move into Middle Tennessee.

Therefore they would pose no threat to Sherman and his objective.

Smith's failure to destroy Forrest and his army infuriated Sherman. As a result of his shortcomings at Tupelo, Smith asked to be relieved from command.

It's clear that Smith did not defeat Forrest and his army, but he crippled their forces enough that they would not be able to fight again. They were able to continue with raids and smaller skirmishes but could not engage in bigger battles.

The Tupelo National Battlefield Park preserves the section of the battlefield where the majority of the fighting took place. 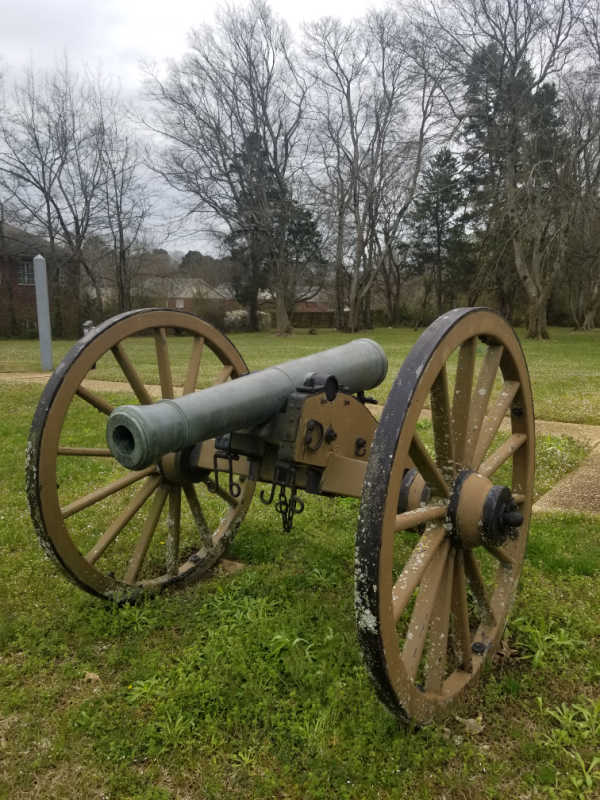 Things to know before your visit to Tupelo National Battlefield

The National Park Service says pets need to be on a leash less than 6 feet in length.

One thing to know is there are cemetery markers in different areas of the park. Please be respectful if you do bring a pet with you.

Cell service was great while in the park.

There is no WiFi at the park.

There is parking along the side of the road next to the park.

There are 21 public charging stations in Tupelo, Mississippi. 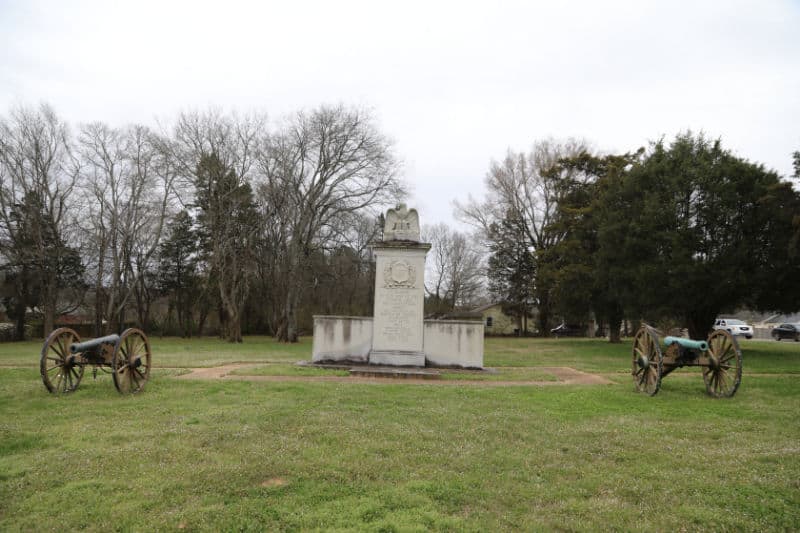 Check out how the park compares to other  National Parks by Size. Hint it is tiny!

August 10, 1933, the park was transferred to the National Park Service

The park does not list visitation currently. The last year available is in 1983. 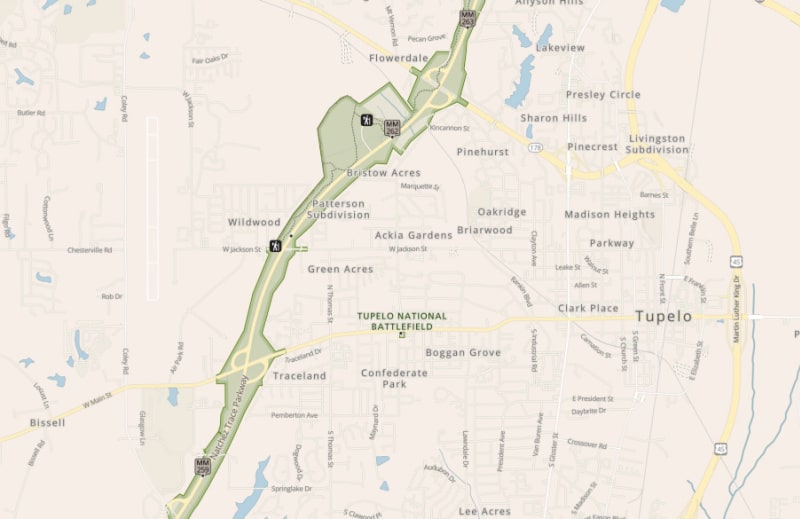 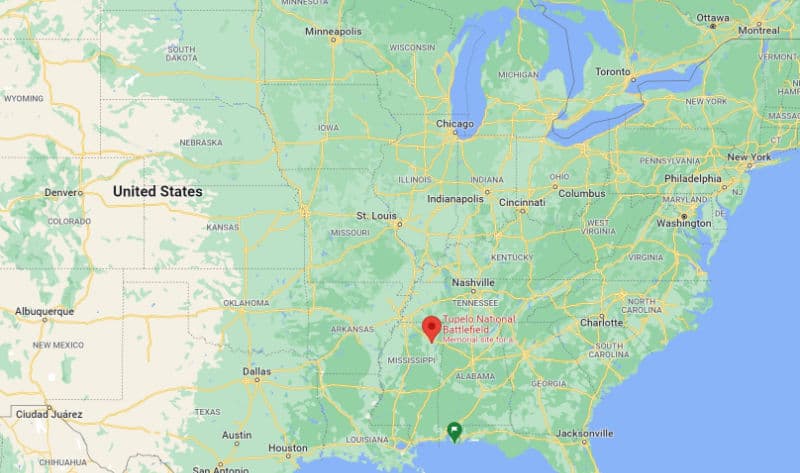 Where is Tupelo National Battlefield?

Tupelo NB is located in Tupelo, Mississippi in the city.

The Natchez Trace Parkway Visitor Center is open every day from 8:00 am to 5:00 pm (Central Time) except December 25.

Tupelo National Battlefield is administered from this visitor center. 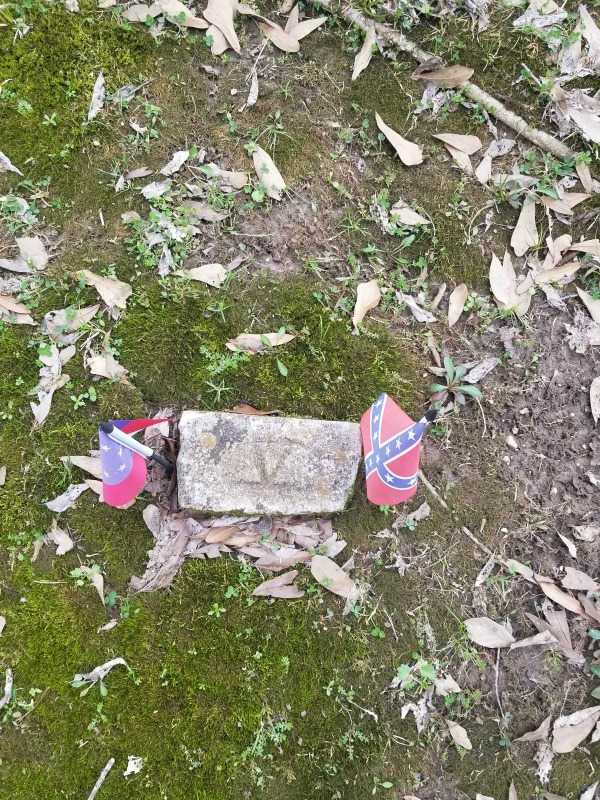 Getting to Tupelo National Battlefield

Main Street in Tupelo is also known as Highway 6 and Highway 278. Tupelo NB sits on the south side of Main Street on the west side of Tupelo.

Exit off the Natchez Trace Parkway onto Highway 6 (near Milepost 260), head east, into Tupelo.

Travel one mile east and find Tupelo NB on the right side of Main Street.

There is limited parking available adjacent to the monument. 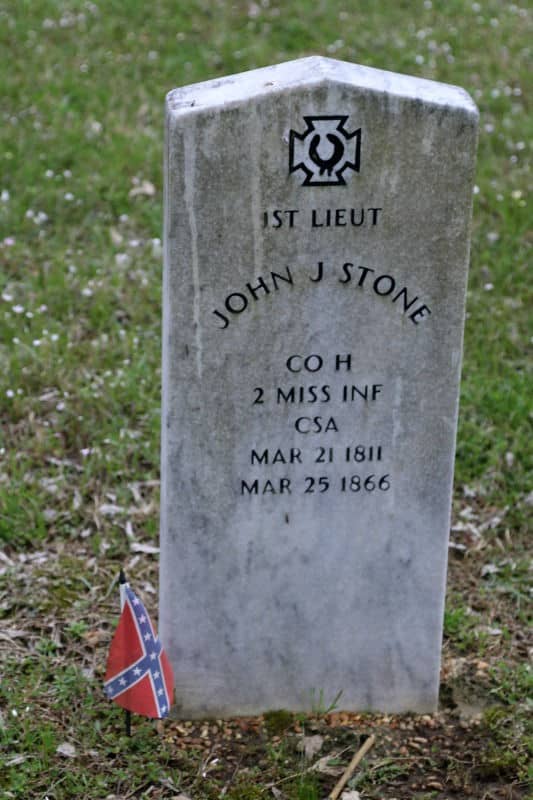 The best time to visit Tupelo NB is Spring and Fall when the weather should be comfortable.

The hottest weather is from May 25 to September 22 with an average daily high above 83 degrees.

The coldest weather lasts from November 28 to February 24th with an average daily high temperature below 60 degrees.

December receives the most rain with 5.2 inches of rain. January receives an average of 1.3 inches of snowfall.

The muggiest weather is from May 12 to October 2nd. 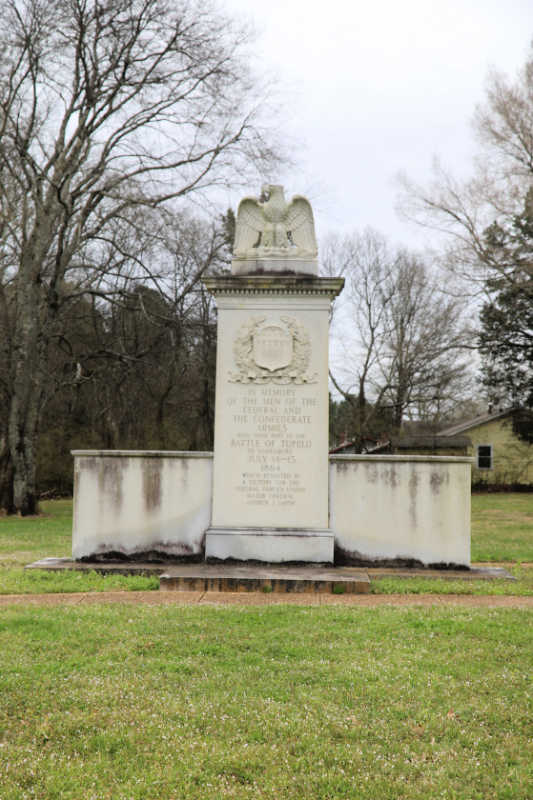 Best Things to do in Tupelo National Battlefield

The top thing to do in the park is to visit the memorial site.

The park did not have any interpretive panels during our visit. There is a monument and cannons to view. 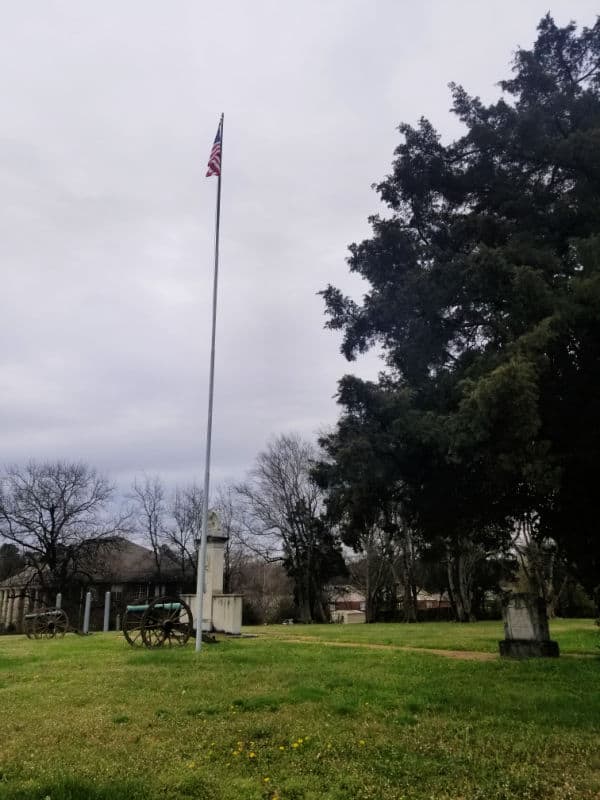 How to beat the crowds in Tupelo National Battlefield?

Honestly, I would be shocked if you encounter a crowd at the park. We did not see another visitor during our time in the park.

Where to stay when visiting Tupelo National Battlefield

Click on the map below to see current rates for hotels and vacation rentals in Tupelo, Mississippi.

Here are a few campgrounds you can find in the area.

This campground offers lodging, RV and Tent Sites, a playground and more. 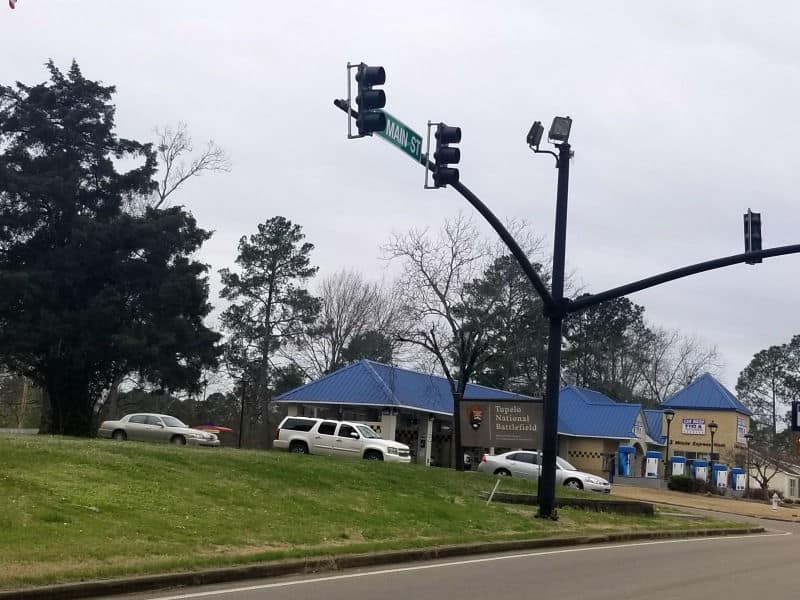