Russell Cave National Monument is located in northeastern Alabama near the Tennessee border.

Russell Cave is an archaeological site with one of the most complete records of prehistoric peoples in the Southeast United States. 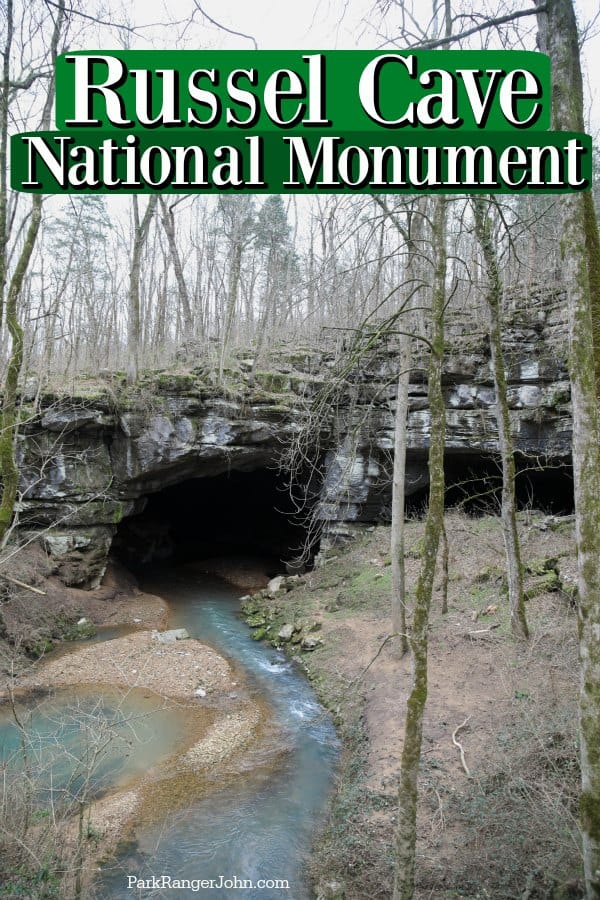 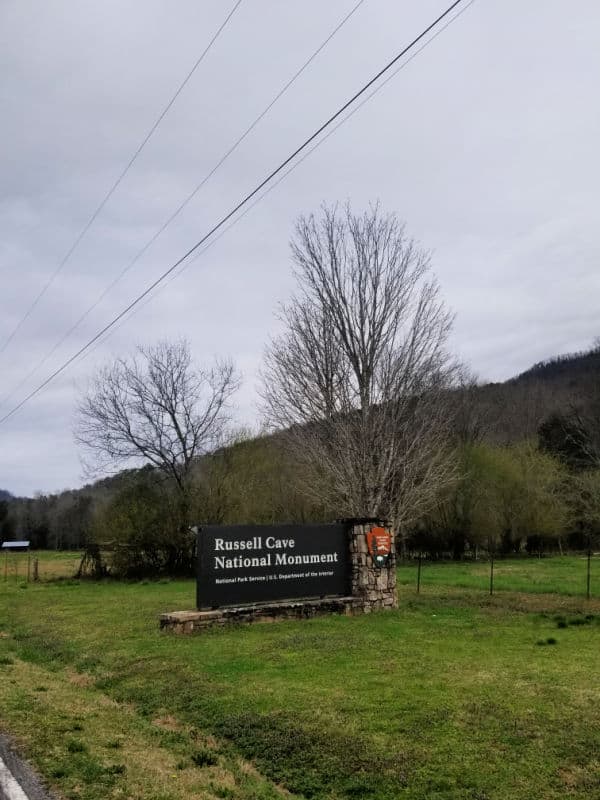 Russell Cave has been home to prehistoric culture in the southeast for thousands of years.

The cave was carved from geologic forces in the limestone. Russell Cave has produced one of the most comprehensive records of the human habitation of Native Americans.

Artifacts have been found in the cave that dates back 10,000 years.

The National Park Service oversees the park as a National Monument.

The park service has great ranger programs and a Junior Ranger program that is great for all guests. 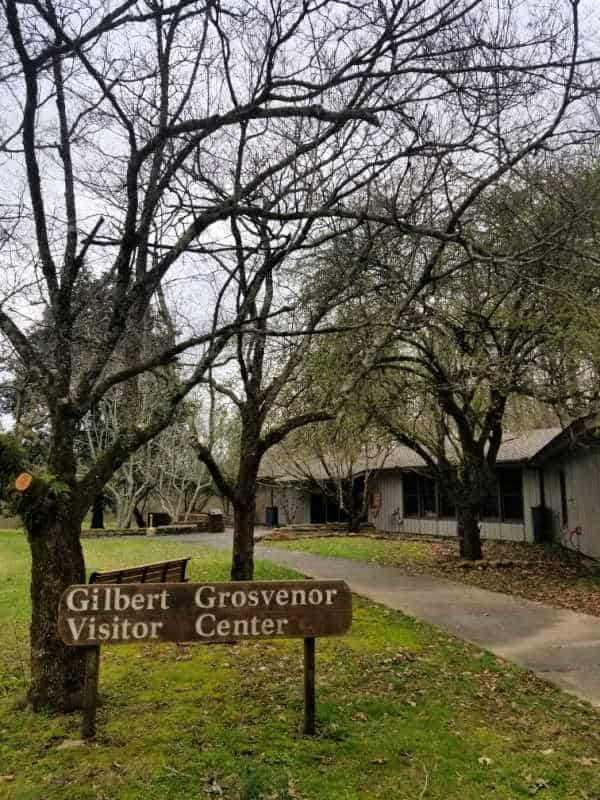 Yes, The park offers the visitor to tour the cave from a boardwalk overlook, learn more about prehistoric Indians, and enjoy some epic bird watching. 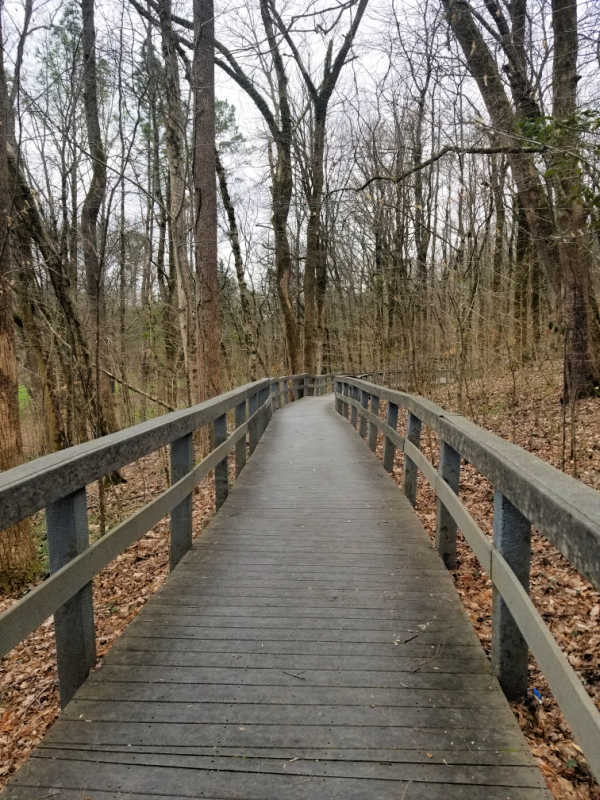 Russell Cave National Monument is located in northeast Alabama, near the town of Bridgeport.  The area is often known as the “TAG” region because the borders of Tennessee, Alabama, and Georgia meet.

Over 300 million years ago what is now Alabama was covered by the sea.  Over millions of years as waters retreated, limestone gave way to thousands of caverns.

Somewhere between 9,000 and 11,000 years ago, a sinkhole exposed a tunnel beneath the ground.

Over time, falling rocks built up near the entrance to the cave, creating land and easy access inside.  It was around 7,000 BC that humans began using the cave as a shelter.

This National Monument is one of the oldest places in America where evidence has shown continuous human activity.

Russell Cave was named after Colonel Thomas Russell from North Carolina.  A Revolutionary War veteran, Russell owned the land encompassing the cave during the time period when maps of the area were drawn.

Dating further back, the land was owned by Russell’s brother-in-law, Major James Doran.  The surrounding land around Russell cave is named Doran’s Cove in his honor.

Excavations dating back to the Archaic Period unearthed stone points for hunting and remnants of fire pits.  Several burials sites including human remains were found dating back from this time period.

The remains ranged in age from infant to 50 years old and were buried in shallow graves.  The Native inhabitants of this age likely hunted deer and turkey and fished in the Tennessee River.

They are also credited as the first inhabitants to begin using an atlatl, a long carved stick with an end that held a spear.  These tools were very useful for hunting and protection.

Russell Cave during the Woodland Period saw southeastern Native Americans beginning to use the bow and arrow and construct pottery.  Archeologists have recovered remnants of both.

Also recovered were collections of seeds from the Chenopodium plant, otherwise known today as Goosefoot.

A small, flowering plant with edible seeds, the Chenopodium plant has traditionally been used as a blood purifier, sedative, and laxative.

Evidence at Russell Cave shows Native Americans were domesticating this planet which means this practice, outdated Natives, in Mexico domesticating maize by 1,000 years.

By the Mississippian Period, Native Americans were beginning to live together in villages near the area and utilizing agriculture to thrive.

Russell Cave was still used during this time, but likely by nomadic peoples or by hunters in the winter.

During the time of the European's appearance, it was the Cherokee Indians who lived in this area of Alabama.  There is evidence of their fishing methods within Russell Cave.

Most of these excavations and discoveries took place in the 1950s and 1960s.

In 1953, the Tennessee Archeological Society first recognized Russell Cave as an archeological site when they began the first dig there.

In 1956, the National Geographic Society purchased 310 acres around the cave from landowner Oscar Ridley.

These excavations dug more than 32 feet below the cave floor.  Over the years, nearly two tons of artifacts have been excavated from Russell Cave.

Russell Cave has been like a hidden time capsule giving scientists a glimpse into humans, and the animals that once lived in Alabama.

The site has also revealed that animals now nonexistent in Alabama were once hunted – cougars, armadillos, and a species of giant boar called peccary.

The National Geographic Society donated Russell Cave to the U.S. government in 1961 and President John F. Kennedy dedicated it as a National Monument in May of that year.

Many of the priceless artifacts found during excavations can be seen at Russell Cave’s museum where you will also see detailed timelines of the cave’s history.

The area also offers hiking trails, in particular, a section of the North American Birding Trail meanders through the hills near the cave.

Recreational caving is no longer allowed at Russell Cave for the preservation of evidence, living species, and possible future excavations.

One such species is an extremely rare species of scorpion that is only known to exist in one other place on earth.

Each year in May, the site holds a Native American festival where reenactments of Cherokee people and demonstrations of weaponry making are featured. 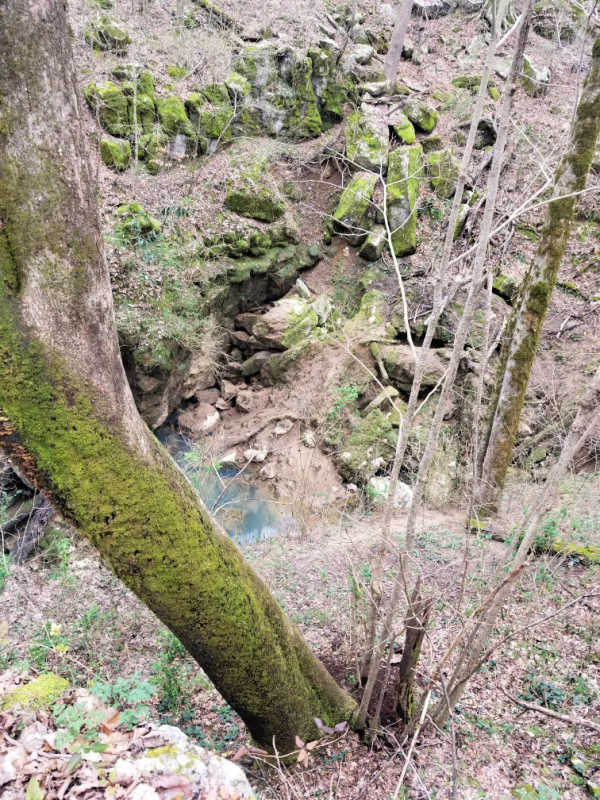 Things to know before your visit to Russell Cave NM

Pets must remain on a leash during a visit to the park. They are allowed on the trails but are not allowed in the park visitor center.

There is no cell service while at the park.

The park is closed on New Year's Day, Thanksgiving, and Christmas.

There is no Wi-Fi at the park. 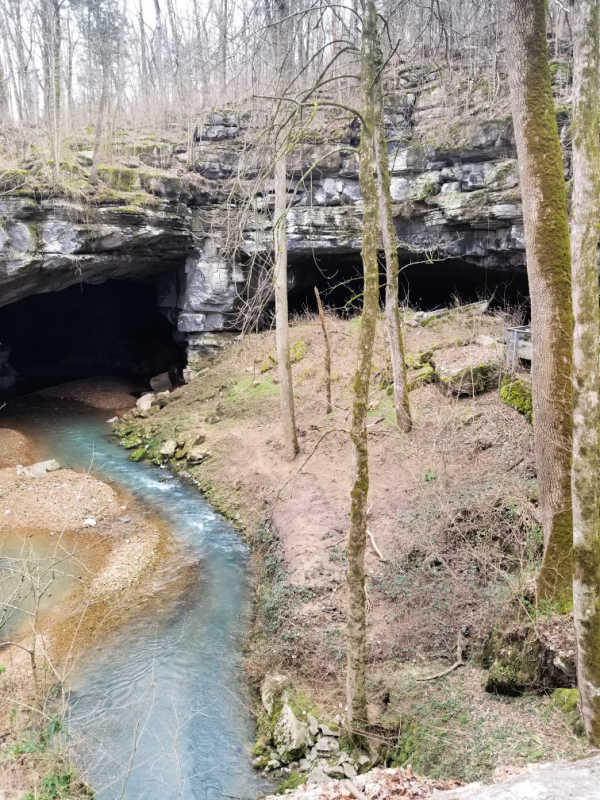 There is a nice size parking lot at the entrance to the park near the visitor center.

There is 1 EV Charging station within 10 miles of the park. 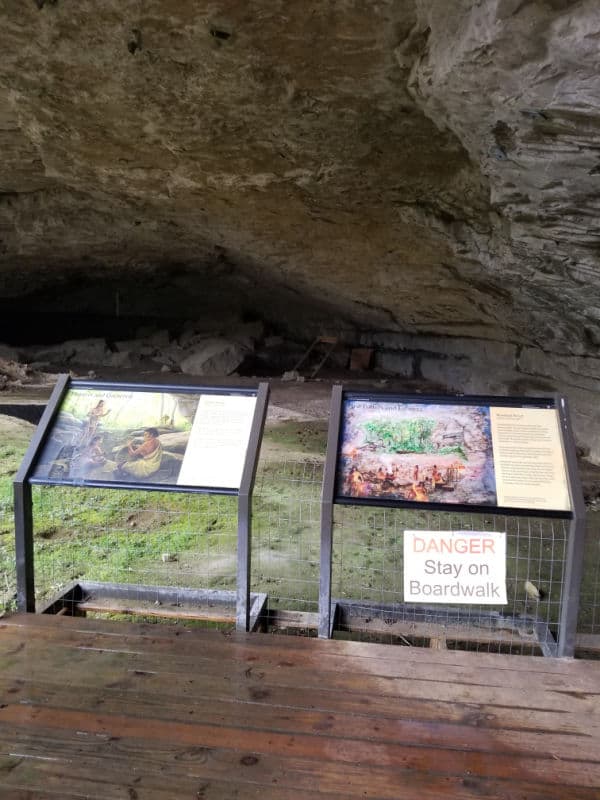 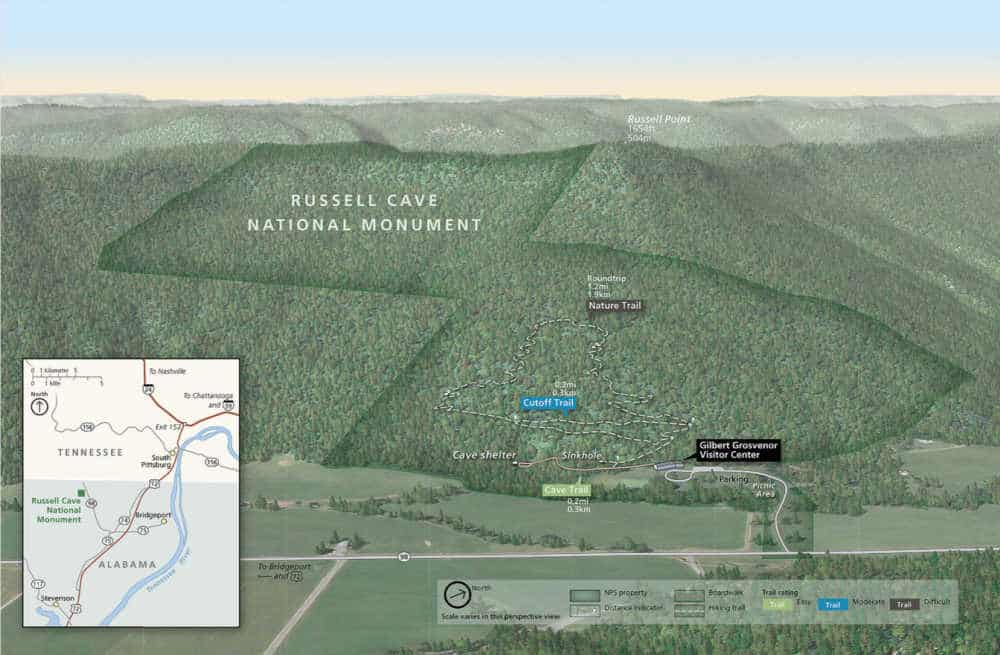 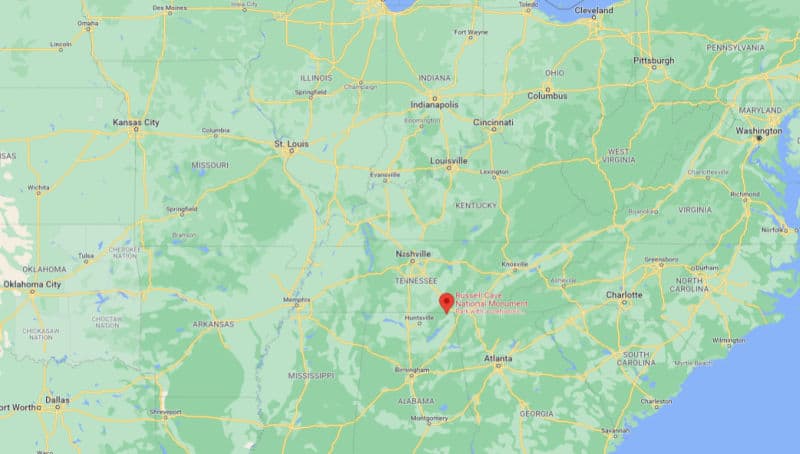 Where is Russell Cave National Monument?

Russell Cave NM is located in far northern Alabama near the border with Tennessee.

The visitor center is located next to the parking lot. 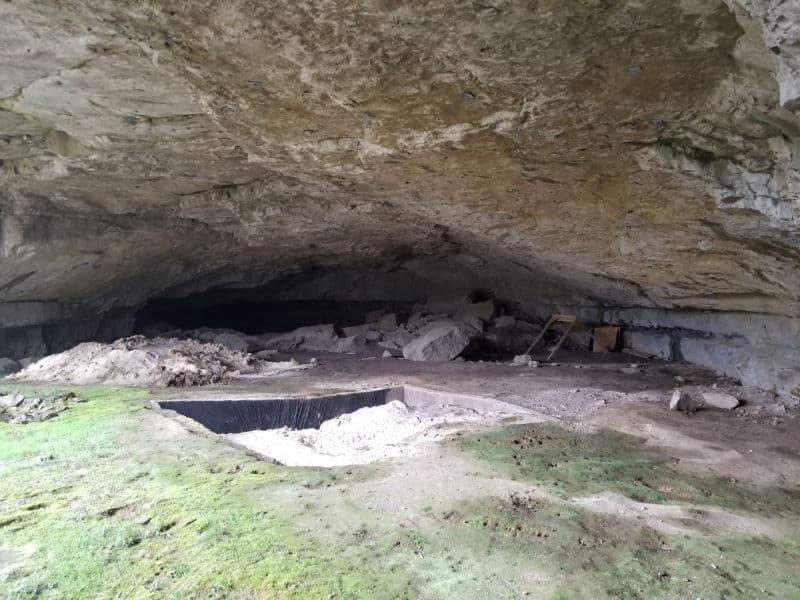 Getting to Russell Cave National Monument

Turn right onto Co Rd 98 and follow for 3.7 miles. The entrance to Russell Cave National Monument will be on the left. 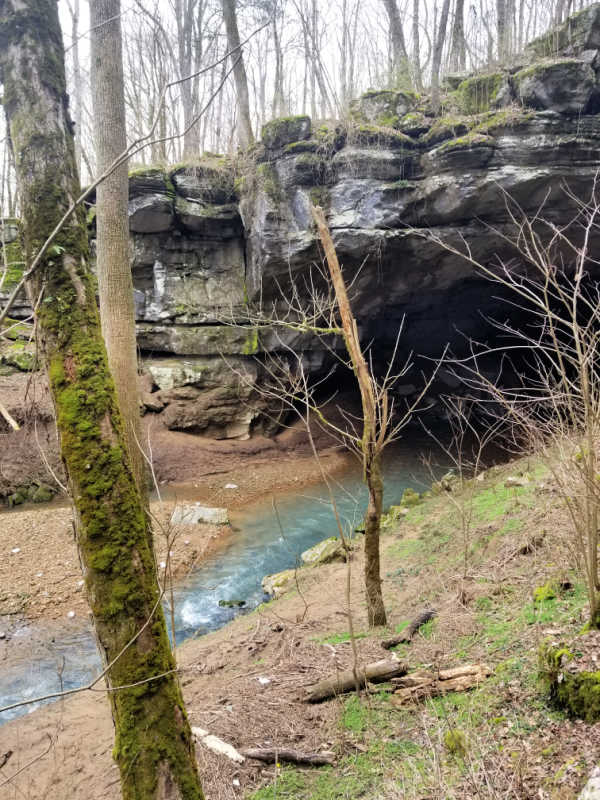 The best time to visit Russell Cave NM is in Spring and Fall when the weather should be comfortable and not that hot.

The hottest months of the year are from May 26 to September 20th when the average temperature is above 81 degrees Fahrenheit.

The coldest months of the year are from November 28 to February 25th when the average temperature is below 57 degrees.

July is the wettest month with 12.4 days of rain.

The muggiest months are from May 20 to September 27th with a lot of muggy weather.

Best Things to do in Russell Cave NM

While Russell Cave NM is a pretty small park you can still enjoy multiple fun things to do while visiting the park.

The park visitor center is the perfect place to start your visit. There is a 7-minute park film, park store, artifacts and museum, and more.

The visitor center has a museum displaying some of the thousands of artifacts that have been excavated from the cave. Displays include fishhooks, pottery, jewelry, and weapons.

There is a small gift shop in the visitor center with books about the park and other National Park gifts.

The 7-minute park film does a fantastic job of explaining the importance and history of Russell Cave. It is filled with information while still being enjoyable to watch. 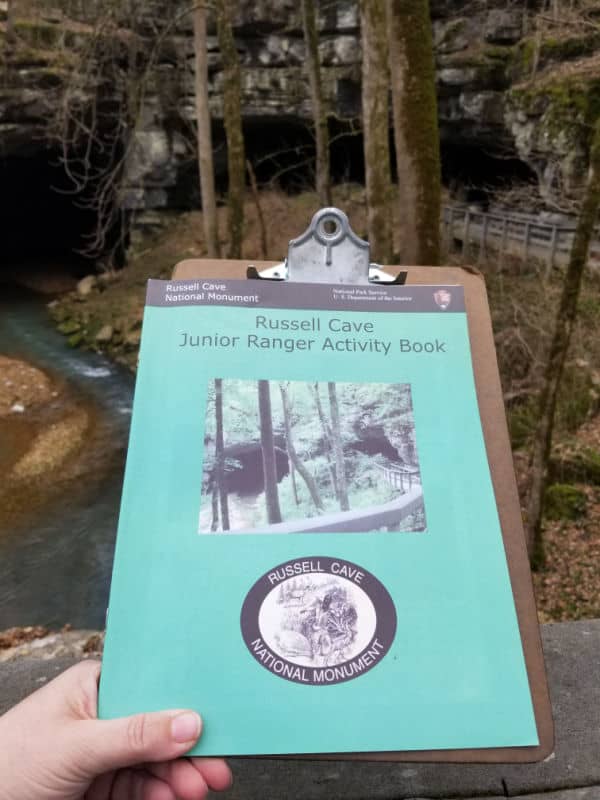 The Russell Cave Junior Ranger program is a bit intense but filled with great information.

The number of pages that have to be completed depends on the age of the participant.

There are a few pages that took some time to find the answers and figure them out.

The ranger did check each page and answer line by line so make sure you fill them out completely with what you think is the answer.

Many of the answers came from the movie and in the park visitor center.

Walk the short boardwalk to the entrance of Russell Cave shelter. Ask at the visitor center about guided Ranger walks to learn more about the inhabitants of the cave.

Though the cave passages stretch for miles you can only check out the entrance to protect artifacts.

Be careful as you get closer to the cave. The walkway can be damp and muddy.  The nature trail is a great way to explore more of this park. You can look for wildlife and birds migrating through the park.

Russell Cave NM is located along the Northern Alabama Birding Trail. More than 115 species of birds live in the area.

This area is along a migration route giving you the opportunity to see Tanagers, Warblers, and other amazing bird species.

On weekend Park Rangers present prehistoric skills such as throwing with an atlatl, fire-starting, and flint-knapping. 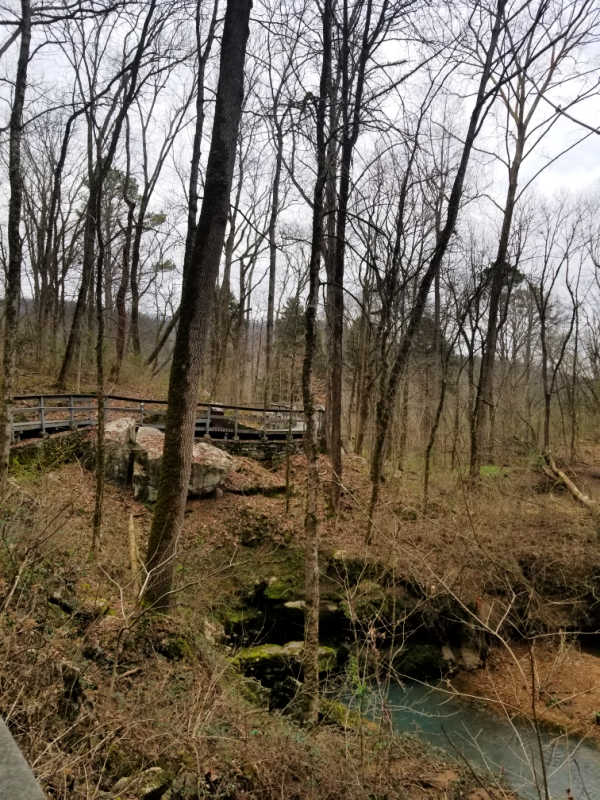 This nature trail gives visitors the opportunity to see plants and the landscape that prehistoric people lived in. 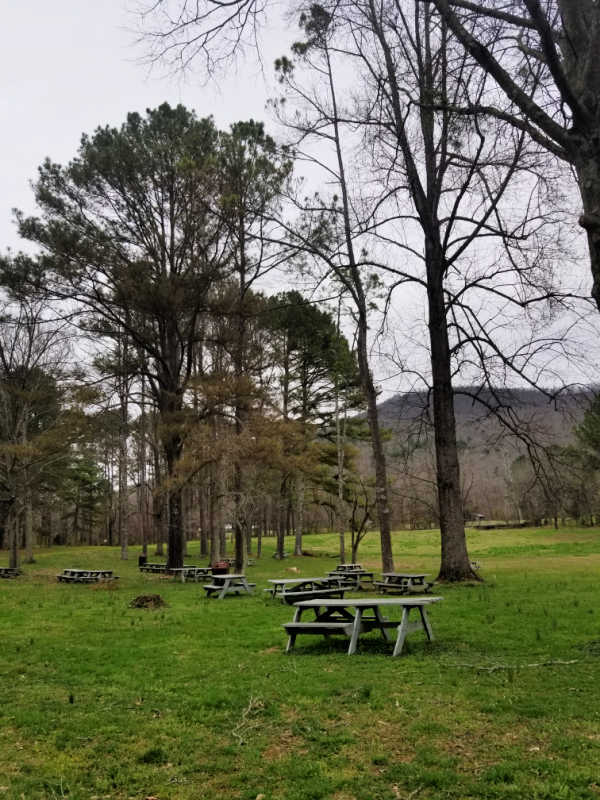 How to beat the crowds in Russell Cave NM?

This is not a park you will need to worry about crowds in. The park is one of the least visited parks in the United States.

Where to stay when visiting Russell Cave NM

The closest lodging is in Kimball, Tennessee and or in Chattanooga, Tennessee.

Best Western Kimball Inn - Free breakfast buffet, dry cleaning/laundry services, and a gym. Free in-room Wi-Fi is available to all guests, along with a business center and a restaurant.

Westin Chattanooga - Located close to Tennessee Aquarium, The Westin Chattanooga provides a rooftop terrace, a coffee shop/café, and a garden. Free in-room Wi-Fi is available to all guests, along with dry cleaning/laundry services and a bar.

Click on the map below to see current rates for hotels and vacation rentals near Bridgeport, Alabama.

There are nearby campgrounds including:

Greeter Falls Campground - 33 miles from the park in Altamont, TN

This campground offers RV and Tent Sites, hiking, and an outdoor theater.

Check out additional campgrounds in the area on Campspot. 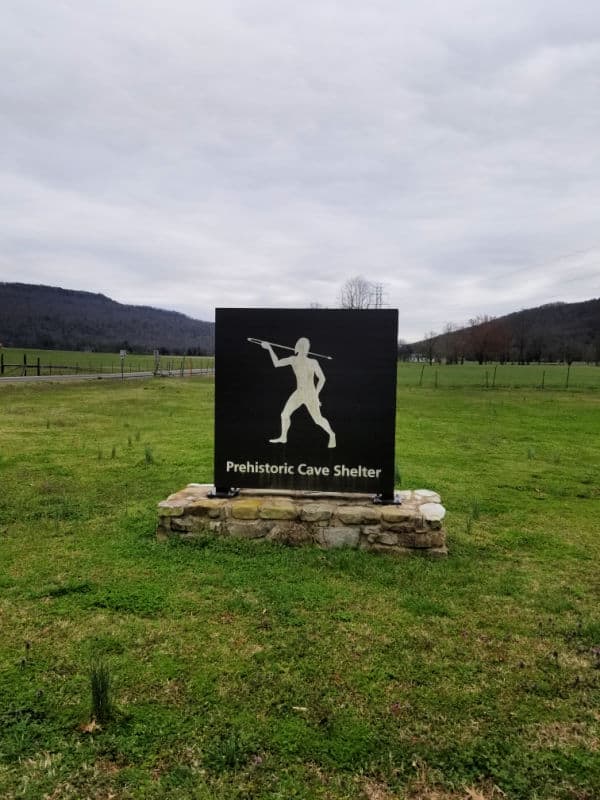