Complete Guide to Fort Necessity National Battlefield in western Pennsylvania including things to do, history, nearby lodging and camping, and so much more. 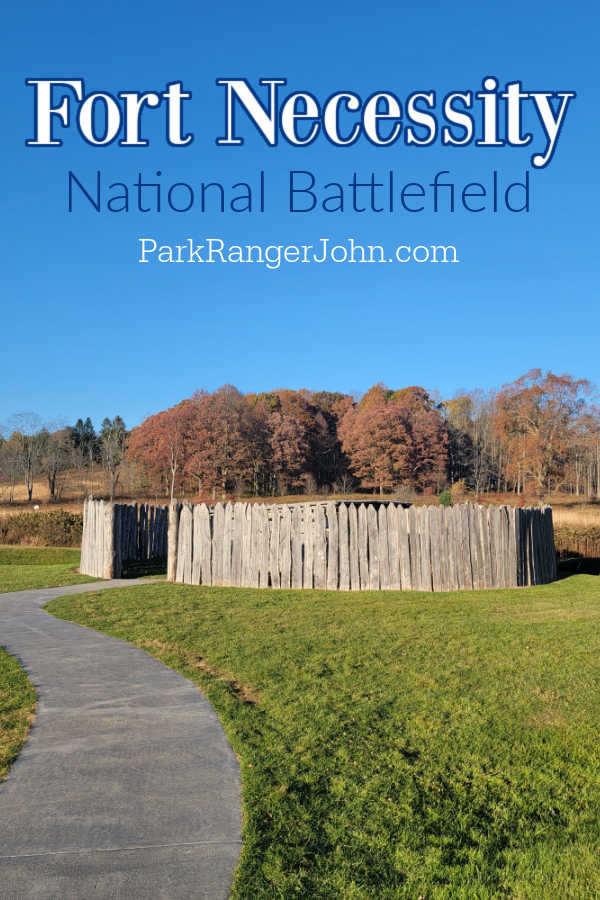 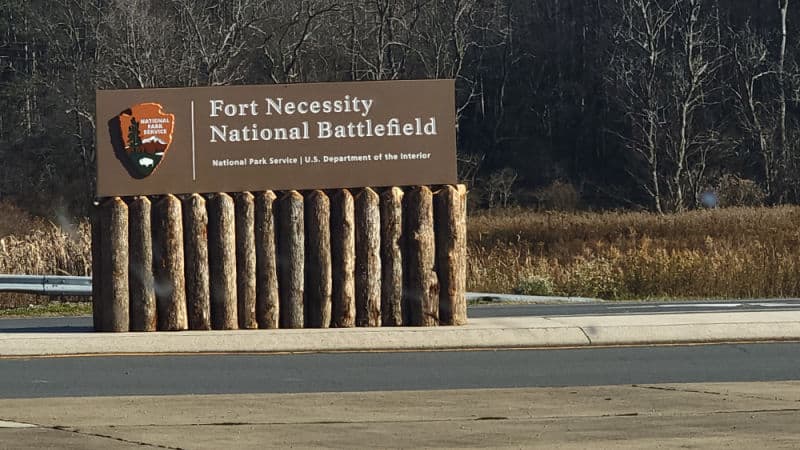 Yes, The park has an absolutely amazing visitor center, a reconstructed fort, and even a playground for kids. 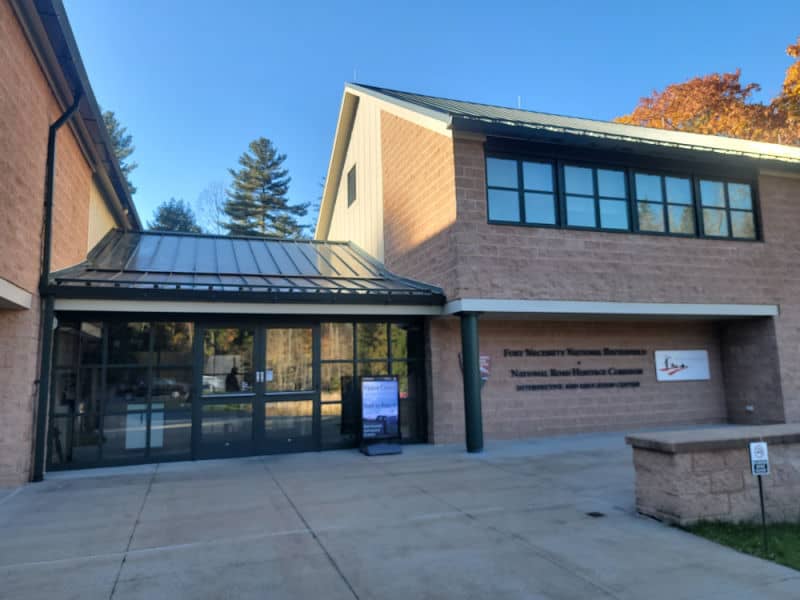 The Battle of Fort Necessity, also known as the Battle of the Great Meadows, was fought on July 3rd, 1754. The battle was the first major engagement of George Washington’s military career.

The Battle of Fort Necessity was the only time George Washington surrendered his army.

Washington built Fort Necessity in the Great Meadow to protect his army after a skirmish with the French at Jumonville Glen.

Washington built a circular fortification, which he dubbed Fort Necessity. Washington's fears were realized when his position was attacked by a force of French and Native warriors on July 3rd, 1754.

Before the Battle of Fort Necessity

Tensions between the French and British in the American colonies over control of the Ohio Valley were slowly escalating in the period before the Battle of Fort Necessity. Relations reached a breaking point at Washington's hastily constructed fortification.

The Ohio River connected New France (Canada) with the French territory of Louisiana. In 1750, the French began pushing British settlers out of the territory claiming it as their own.

When the French built two forts in land believed to be under British control, the British Governor of Virginia, Robert Dinwiddie, sent an emissary to the French.

In 1754, Dinwiddie had sent a force to build a fort where the Ohio River forked. He sent Washington and over 150 Militia to the site to ensure nothing hindered the fort's construction.

On the way to the fort, Washington learned that the British were no longer in control of the area, having been driven out by the French.

Washington received new orders to march to Wills Creek, modern-day Cumberland, to build a road. By May 1754, Washington and his men came upon a large marshy meadow known as the Great Meadow.

It was here Washington set up his base and waited for reinforcements to arrive from Virginia.

Not long into his stay in the Great Meadow, Washington was alerted to French soldiers, presumably on a scouting mission, close to his base, hiding in a ravine. Washington set out with 40 men toward the French position to investigate.

Washington's force surrounded the French. Soon shots were fired, and a skirmish broke out between the two sides in the glen. The fight lasted no more than 15 minutes, but 13 Frenchmen, including their commander, Ensign Joseph Coulon de Jumonville, the glens namesake, were killed.

Washington lost one man in the engagement, and a few men were wounded. The French claimed that Washington had attacked their position unprovoked and that they were French emissaries on a peaceful mission.

Washington was skeptical of the surviving French soldier's story and returned to his base at Great Meadow.

When Washington returned to his base, he decided to construct a circular wooden fortification in case the French retaliated after the skirmish in the glen.

The fort was constructed in the middle of the meadow, in a depression too close to the tree line. Washington dubbed the fortification Fort Necessity.

Washington received reinforcements on June 9th, bringing his force up to 293. Another 100 British Regulars from South Carolina, under the command of Captain James McKay, arrived a few days later.

McKay and his men stayed at Fort Necessity while Washington and his force opened a road from Fort Necessity to the frontier settlement of Gist’s Plantation.

Towards the end of June, the British received word that a force of 600 French and 100 Native warriors were advancing towards Fort Necessity. Washington and his men quickly returned to the Great Meadows on July 1st.

The Battle of Fort Necessity

When the French and Native warriors arrived at the Great Meadows on July 3rd, 1754, the British had built a series of defensive earthworks around Fort Necessity. The French, led by the brother of Jumonville, surrounded Fort Necessity.

Washington’s men, and several British Regulars, occupied the entrenchments around the fort. They managed to hold the line after the initial French charge. Many of the Virginia militia fled the trenches back to the fort.

After repelling the initial charge, Washington ordered his men to withdraw from the trenches to the fort. The French bombarded Fort Necessity throughout the day.

By 8:00 pm that evening, Washington and his men were pinned down and running low on ammunition. At this point, the French Captain sent a message to negotiate the British surrender.

Washington agreed to surrender to Captain Louis Coulon de Villiers. Fort Necessity was handed over to the French, while Washington and McKay were allowed to retreat to Wills Creek. Washington was also accused of assassinating Jumonville, which he denied. 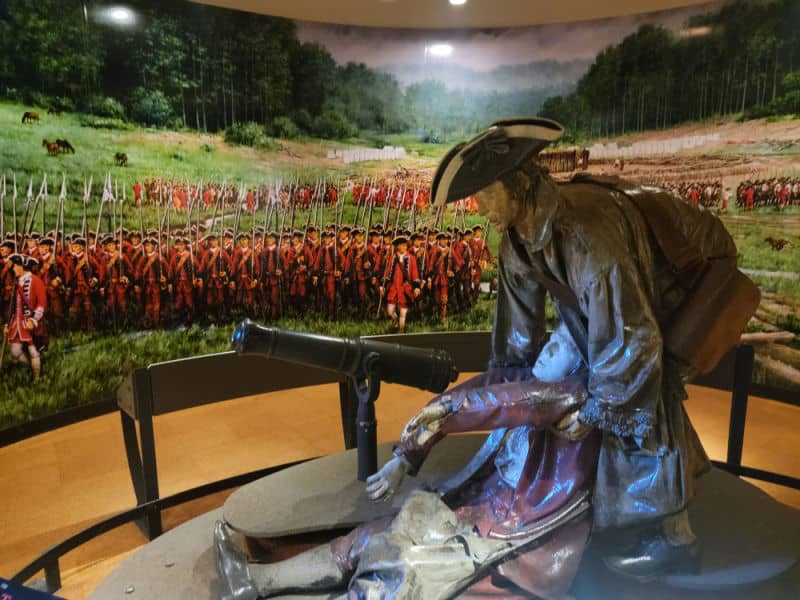 Things to know before your visit to Fort Necessity National Battlefield

Pets are welcome in the park as long as they are on a leash less than 6 feet in length.

Cell service is generally available in outdoor areas of the main park unit and Braddock's Grave, though some dead zones exist.

Cell coverage at Jumonville Glen is spotty. Cell service inside the Visitor Center is poor.

Park grounds are open from sunrise to sunset

The visitor center is open from 9 am to 5 pm

Wi-Fi is not available.

Fort Necessity NB is part of the 2004 Passport Stamp Set.

There are at least 75 EV Charging stations within 30 miles of Farmington, PA 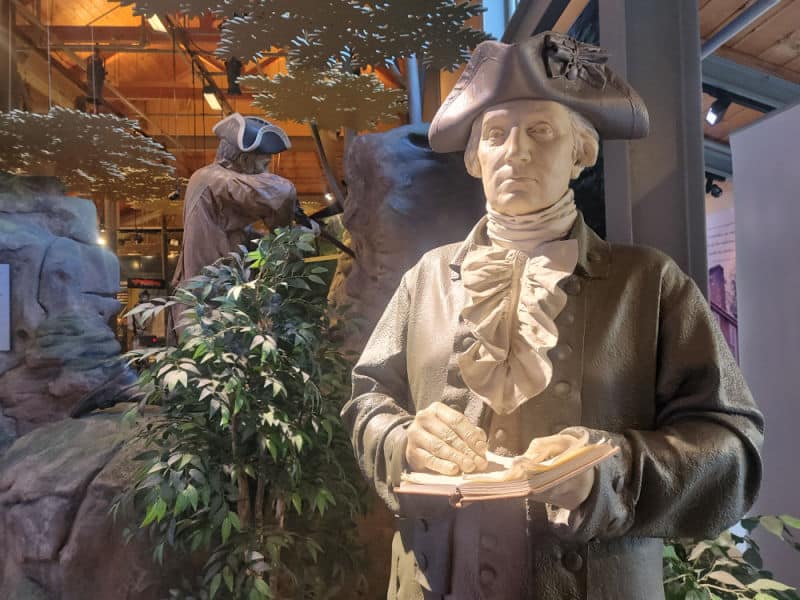 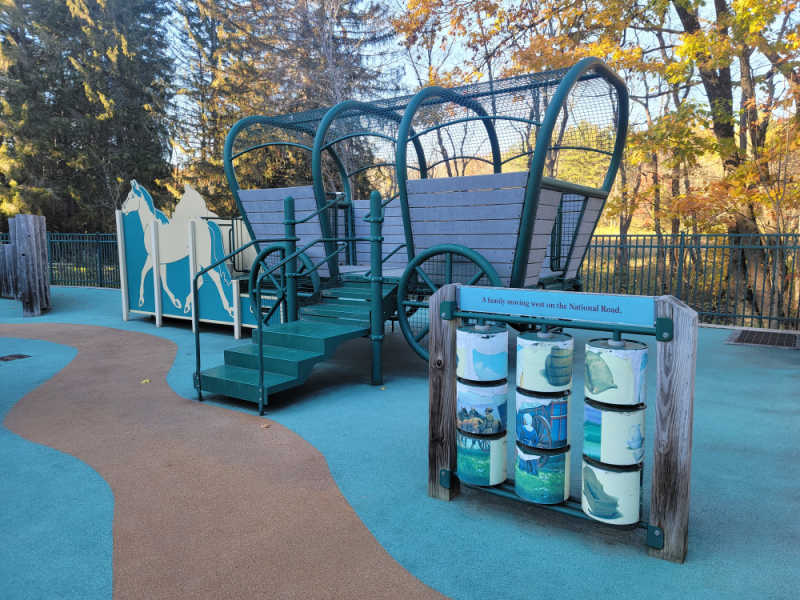 Where is Fort Necessity National Battlefield?

Fort Necessity NB is located in Farmington in Western Pennsylvania. The main unit of the park is located 11 miles east of Uniontown, Pennsylvania on U.S. Highway 40.

The park visitor center is right off of the park entrance road. 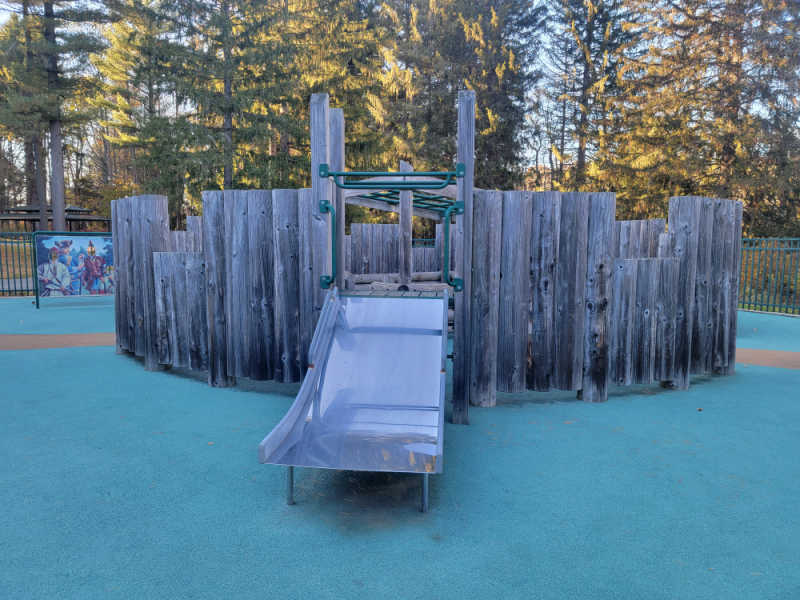 Getting to Fort Necessity National Battlefield 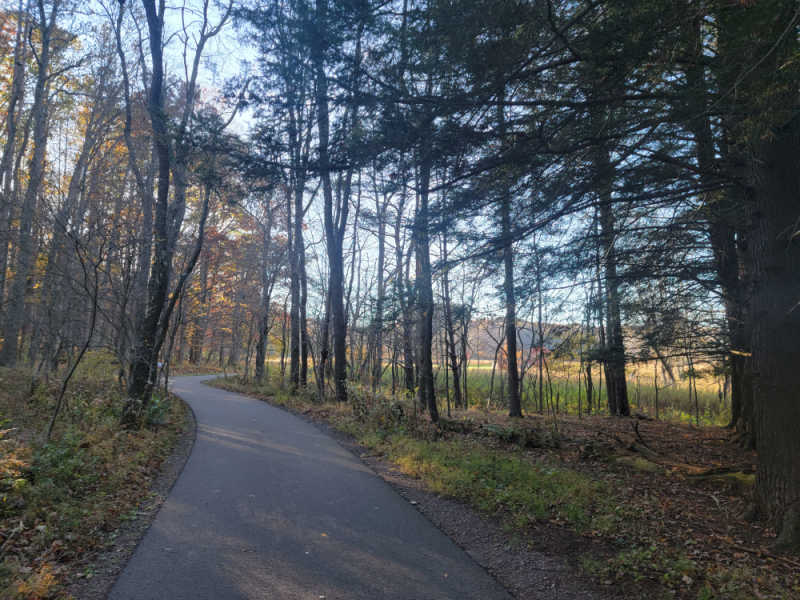 The best time to visit is late spring through fall when the snow has melted and you can enjoy nice weather.

The warmest weather is from May 25 to September 19th when the average daily temperature is above 74 degrees.

The coldest weather is from December 2 to March 3rd with an average daily temperature below 47 degrees.

The snowiest month is January with an average of 1.7 inches. 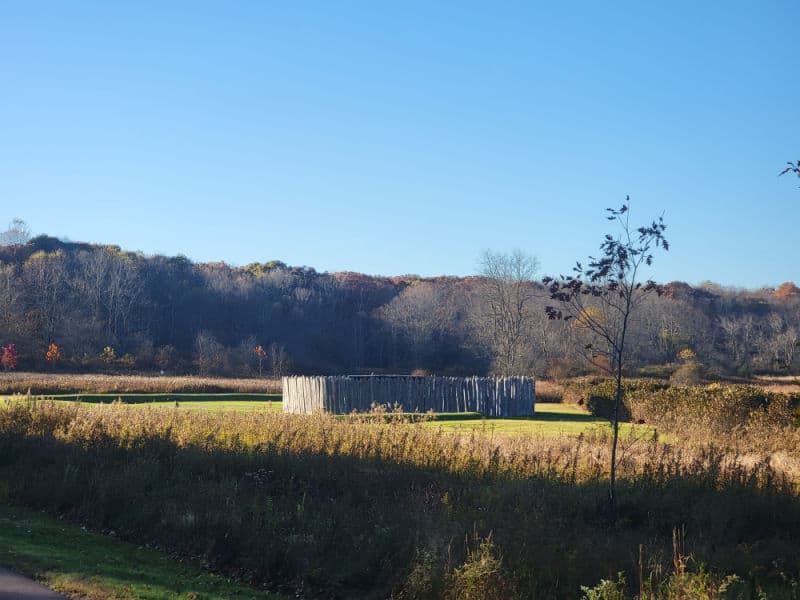 Best Things to do in Fort Necessity National Battlefield

The visitor center is the perfect place to start your visit to the park. There is a 20-minute film "Road of Necessity" which talks about the park's history.

We found the visitor center exhibits to be really interesting and well worth planning time to explore. The park film does a great job of telling what happened at Fort Necessity.

We could have spent an hour or two just exploring the visitor center.

The Júnior Ranger program can be picked up at the visitor center. It is a great way for visitors of all ages to learn more about the park.

There is also a senior ranger program available at the visitor center.

The Junior Ranger program can be filled out while exploring the visitor center. If you are filling the program out with younger kids I would suggest helping them. There are some tough questions included.

During the summer months, you can check out a black powder weapons demonstration. 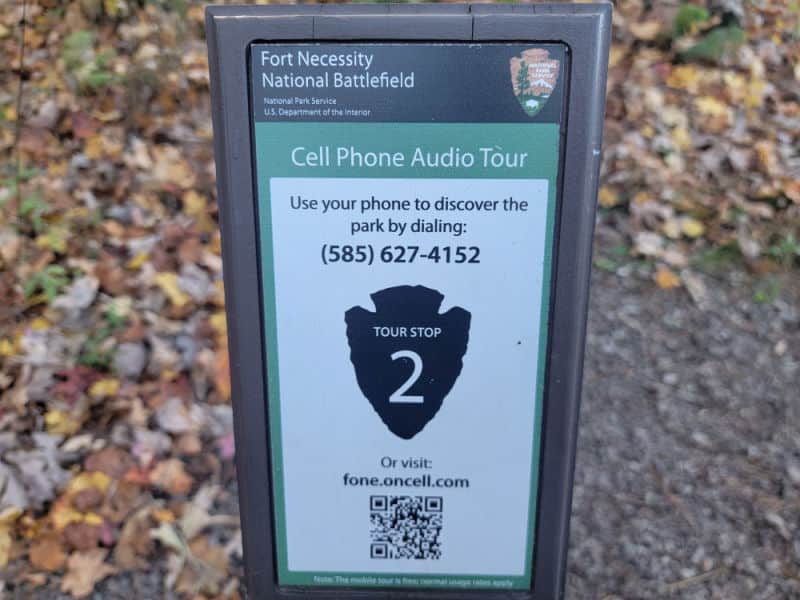 There is a great cell phone tour that guides visitors through the battlefield. 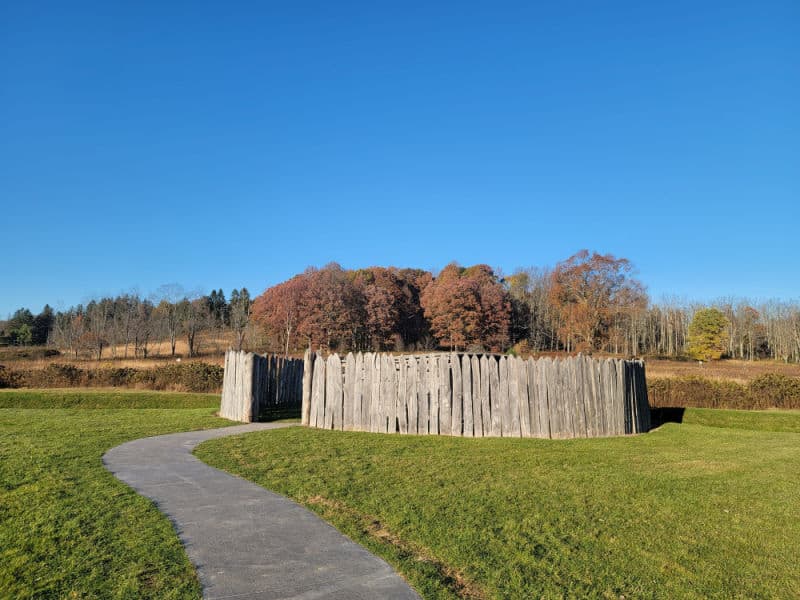 There are 5 miles of hiking/walking trails within the park.

It is a 1/3-mile walk from the visitor center to the reconstructed fort on a paved walkway. 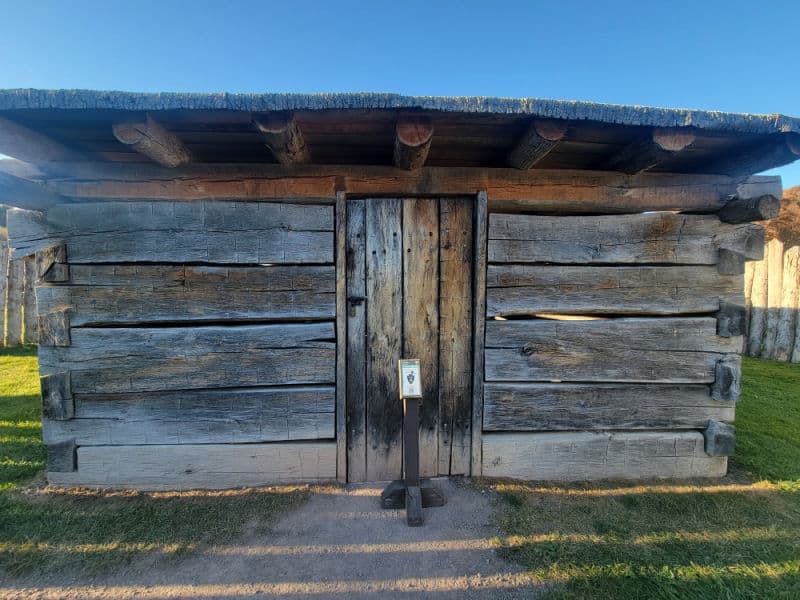 How to beat the crowds in Fort Necessity National Battlefield?

We did not experience any crowds while visiting the park. Both the visitor center and path to the reconstructed fort have ample room to maneuver around people.

Where to stay when visiting Fort Necessity National Battlefield

Lodging near the park includes:

Nemacolin - Consider a stay at Nemacolin and take advantage of 36 holes of golf, a bowling alley, and a swim-up bar. Be sure to enjoy a meal at The Tavern, the onsite restaurant. The gym offers aerobics classes and yoga classes; other things to do include rock climbing, mountain biking, and hunting. Free in-room Wi-Fi is available to all guests, along with a poolside bar and a grocery/convenience store.

Hilton Garden Inn Uniontown - look forward to golfing on site, a grocery/convenience store, and a terrace. For some rest and relaxation, visit the hot tub. The onsite restaurant, The Garden Grille, features American cuisine. Stay connected with free Wi-Fi in public areas, and guests can find other amenities such as dry cleaning/laundry services and a bar.

Holiday Inn Express & Suites Uniontown - look forward to free full breakfast, a grocery/convenience store, and dry cleaning/laundry services. Stay connected with free in-room Wi-Fi, and guests can find other amenities such as a 24-hour gym and a business center

Hampton Inn Uniontown - look forward to free to-go breakfast, a gym, and a business center. For some rest and relaxation, visit the sauna or the steam room. Stay connected with free in-room Wi-Fi, and guests can find other amenities such as a snack bar/deli.

Click on the map below to see additional vacation rentals and lodging near the park. 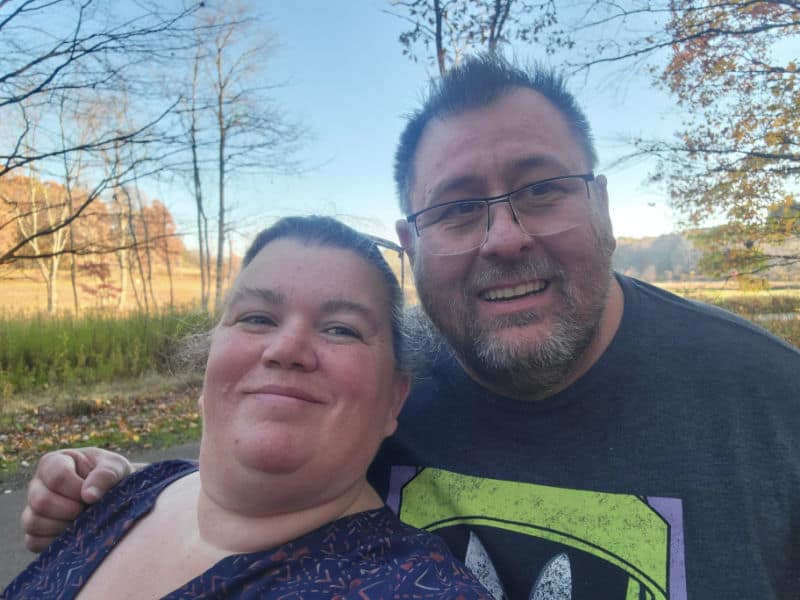