Complete guide to Flight 93 National Memorial in Pennsylvania including history, things to do, lodging, camping, and more. 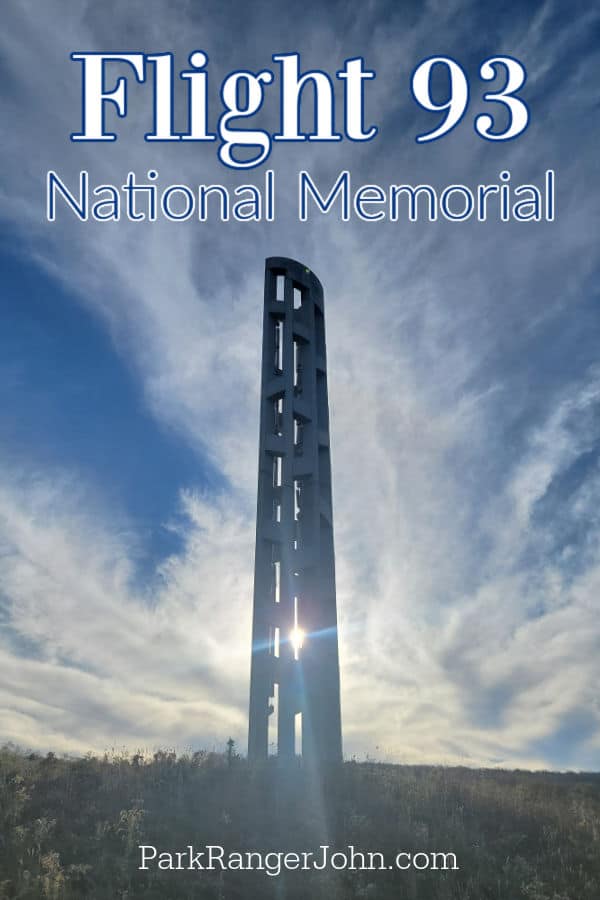 On the morning of September 11th, 2001, America came under attack. Four commercial airplanes carrying hundreds of civilians were hijacked by nineteen militants from the Islamic extremist terrorist organization, al Qaeda. 3,000 people died as a result.

Three of the planes reached their intended targets. One plane, United Airlines Flight 93, did not.

United Airlines Flight 93 was a Boeing 757, traveling from Newark International Airport in New Jersey to San Francisco, California, with 44 passengers on board and 7 crew members.

Of the 44 passengers, only 34 were traveling for normal reasons, the remainder were terrorists.

The men and women on board the ill-fated flight decided to fight back against their hijackers.

The terrorists, rather than allow the passengers to regain control of the aircraft, crashed it in a field in Pennsylvania.

The Flight 93 National Memorial preserves and forever memorializes the site where the brave men and women of Flight 93 lost their lives fighting to ensure their flight did not reach its intended target. 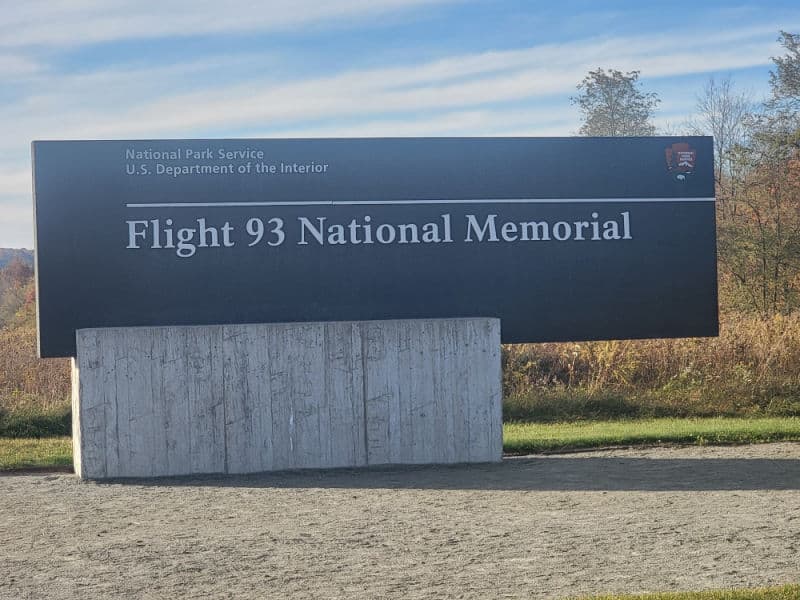 Is Flight 93 National Memorial worth visiting?

Yes! We were a bit nervous going into our visit to Flight 93 NM. We were not sure how emotional the visit would be and if we were prepared to go back in time to 9/11.

Once we were in the park we were in awe of how amazing the memorial is. The park service did an unbelievable job telling the story of the events that happened and really giving visitors the opportunity to process the events. 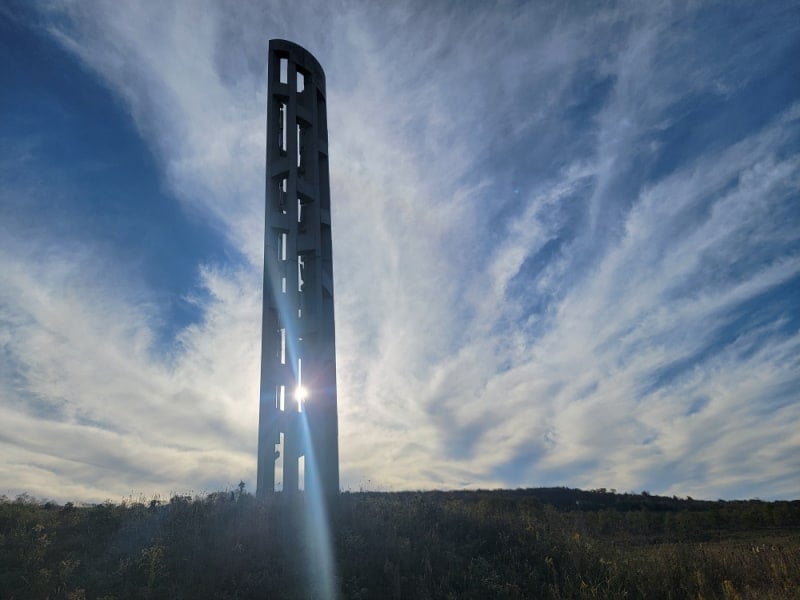 The Beginning of the Attack

September 11th started the same way as any other Tuesday. People all across the country woke up and went to work or school, some people rushed to the airport to catch their flight.

Nothing was unusual or remarkable about the day, until 8:45 am when the largest foreign attack in history to take place on American soil began.

The terrorist organization meticulously planned the events that unfolded on September 11th. They chose flights that were typically not as popular, to ensure they would be met with the least resistance.

The first hijacked plane, American Airlines Flight 11, crashed into the North Tower of the World Trade Center in New York City at 8:45 am.

Eighteen minutes later, the world watched in horror as a second plane, United Airlines Flight 175, crashed into the 60th floor of the South Tower. After the second strike, it became clear America was under attack.

Several minutes later, United Airlines Flight 77 crashed into the west side of the Pentagon. 64 people onboard the aircraft and 125 military personnel died.

At 9:45 am, all flights in America were instructed to land at the nearest airport. Over 4,000 landed safely. One plane, United Airlines Flight 93, was unresponsive.

A coordinated attack was planned so that each of the four planes took off around the same time in the morning to achieve the desired effect. United Airlines Flight 93, had been 25 minutes late for take-off.

Four minutes after Flight 93 took off, the first plane hit the North Tower. 46 minutes into the flight, while flying over Pennsylvania, the hijackers took control of the plane.

After the terrorists took control of the cockpit, they reprogrammed the plane's autopilot and steered Flight 93 southeast, toward Washington, D.C.

The crew and passengers on board were ordered to the rear of the plane and told to be quiet. Instead, they began to report the hijacking by telephone.

The crew and passengers of Flight 93 soon learned of the horrifying truth of their situation and that they were part of a larger attack on the United States of America.

Within 30 minutes, the crew and passengers of Flight 93 devised a plan to hopefully stop their plane from crashing into the extremist's intended target. They decided to fight back against the hijackers.

The terrorists began to roll the plane from left to right and up and down in an attempt to stop the attack.

When this failed, the terrorist piloting the plane decided to crash the plane rather than lose control.

A Common Field One Day, a Field of Honor Forever

The terrorists turned the plane upside down while trying to subdue the passengers and crew.

Orders were given, and shortly after at 10:03 am, Flight 93 crashed into an empty field in rural Pennsylvania.

The 7,000 gallons of jet fuel the plane was carrying, exploded on impact sending a fireball high into the sky.

There were no survivors.

The fact that the last plane did not reach its destination is due to the courageous actions of the crew and passengers aboard United Flight 93.

The men and women aboard Flight 93 are believed to have prevented an attack on the U.S. Capitol building.

Today, the crash site commemorates the bravery of the men and women aboard Flight 93 and all who lost their lives on September 11th, 2001. 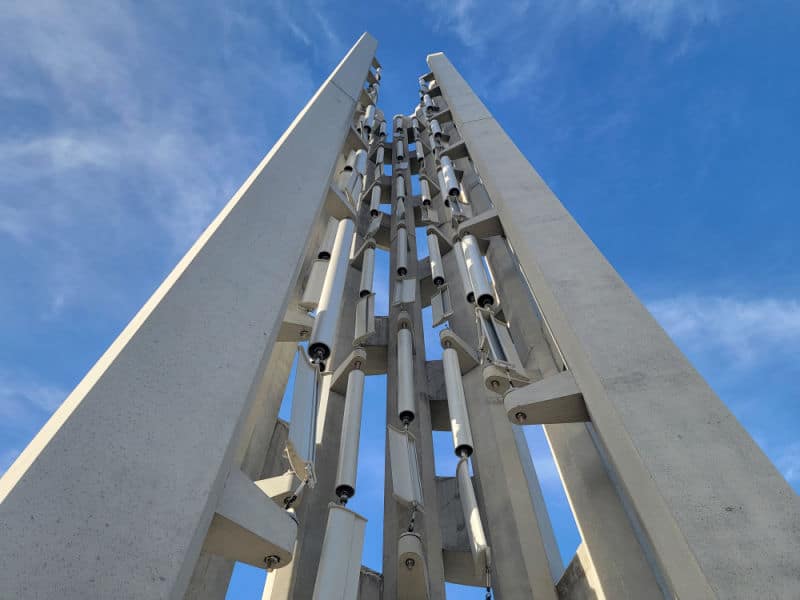 Things to know before your visit to Flight 93 National Memorial

The park pass covers everyone in the car for per-vehicle sites and for up to 4 adults for per-person sites.

Pets are allowed at the memorial. They must be on a leash less than 6 feet in length at all times.

Pets are also allowed on the Western Overlook Trail, Allee, and the Trail of Remembrance.

Pets are NOT permitted in the visitor center, on the Flight Path Overlook, or at the Memorial Plaza interpretive panels, visitor shelter, or at the Wall of Names.

We had great cell service while at the beach.

The park is closed on Christmas Day.

Wi-Fi is not available at the park.

There is a large parking area in front of all the main areas of the park. 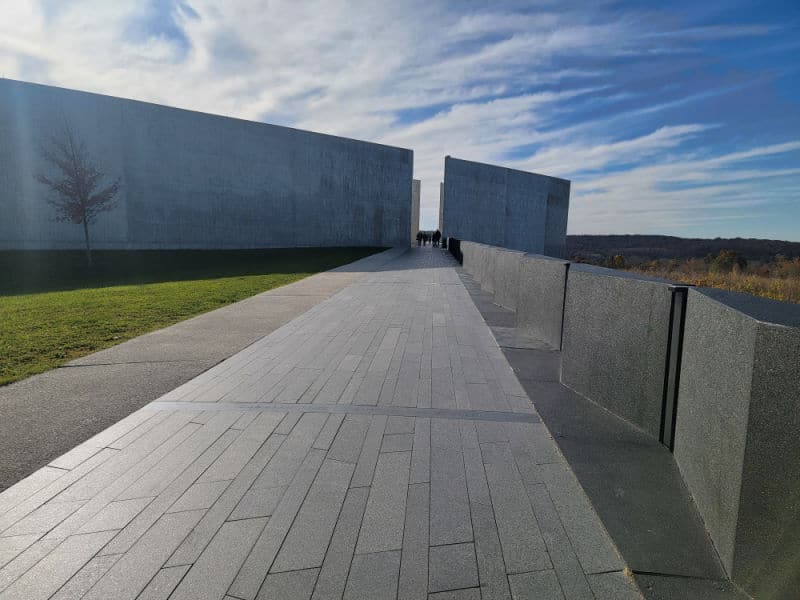 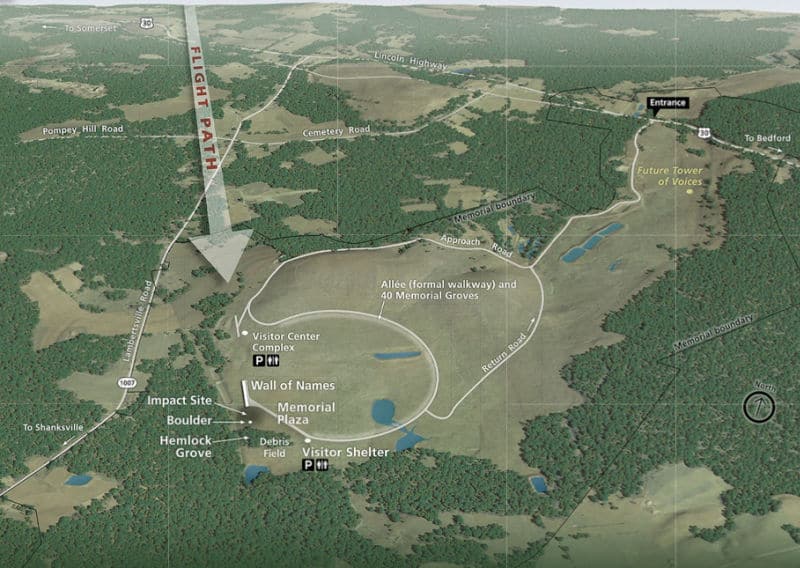 Where is Flight 93 National Memorial? 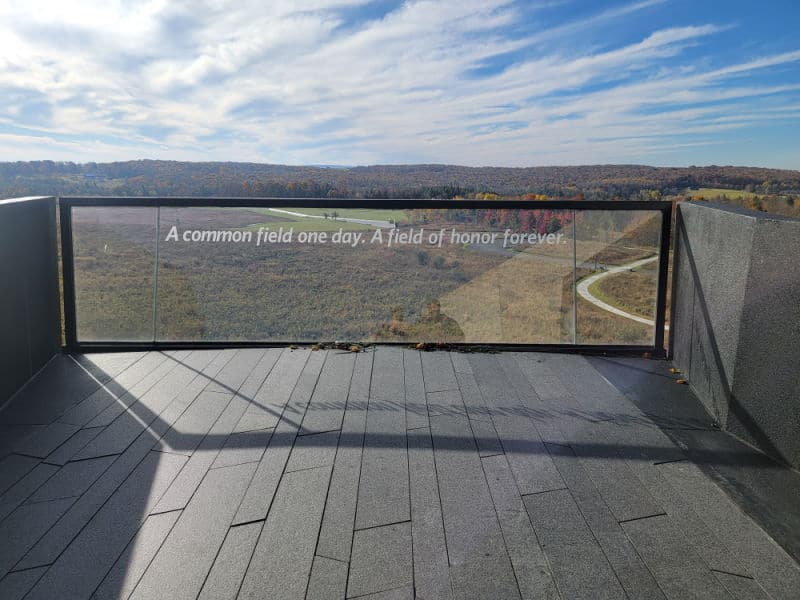 Getting to Flight 93 National Memorial

The entrance to the memorial is located on US Route 30/Lincoln Highway.

Traveling east on the PA Turnpike take exit 110 - Somerset and follow the signs.

Please note mapping programs may note alternate entrances, but the only entrance to the memorial is located on US Route 30. 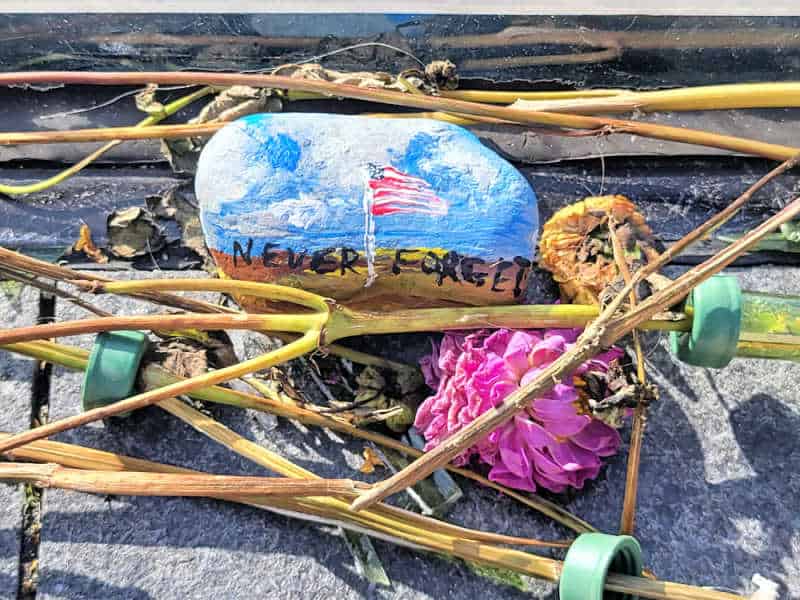 The best time to visit the park is spring through fall when you don't have to worry about driving on snowy roads.

The warmest weather is from May 26th to September 17th with an average daily temperature above 70 degrees.

The coldest weather is from December 1st to March 4th with an average daily temperature below 42 degrees.

The coldest weather is in January with an average daily low of 21 degrees and a high of 34 degrees. 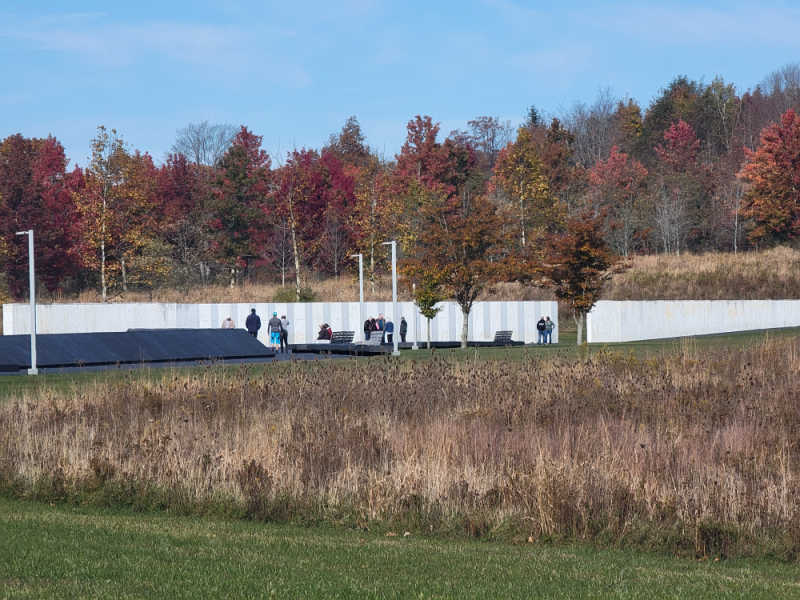 Best Things to do at Flight 93 National Memorial

The visitor center is the perfect place to start your visit. The exhibits tell the story of the passengers and crew members along with the response and investigation that followed the crash.

Trigger warning there is videos replaying the events of September 11th showing the planes hitting the World Trade Center.

It was hard hearing the news reports again and re-living September 11th.

There is a park bookstore and gift shop in the visitor center. 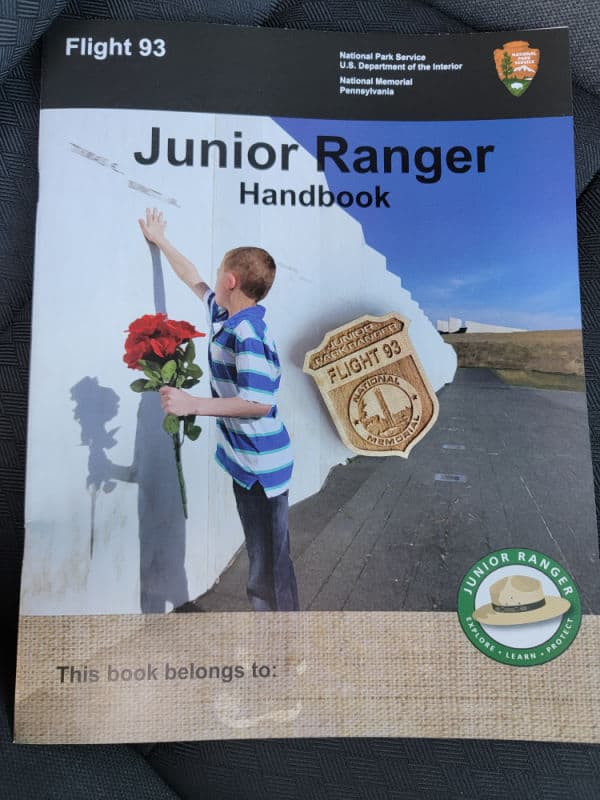 The Junior Ranger Program can be picked up at the visitor center. It is written to help kids ages 6 through 12 learn about Flight 93.

This is one of the best Junior Ranger programs we have completed in the parks. The park service partnered with the Fred Rogers Institute to make sure they could help kids understand the park without being overwhelmed.

The Tower of Voices is a visual and audio reminder of the heroics that the 40 passengers and crew of United Flight 93.

The Tower of Voices is a 93-foot tall musical instrument that holds 40 wind chimes representing the forty passengers and crew members.

The chimes were installed and dedicated on September 10, 2020.

One thing to know is the chimes are wind activated so the sound is dependent on wind speed and direction.

The Memorial Plaza is the 1/4 mile northern boundary to the crash site which is the final resting place of the passengers and crew members of Flight 93.

The Wall of Names features 40 white polished marble stones inscribed with the names of the passengers and crew members.

The wall of names is a quarter mile from the visitor shelter.

Visitors can leave message cards inside the Visitor Shelter located next to the Memorial Plaza Parking Lot.

Visitors can leave a small tribute item in a niche that is located at the mid-point on the Memorial Plaza.

The Forecourt holds six interpretive signs that share the story of September 11, 2001. 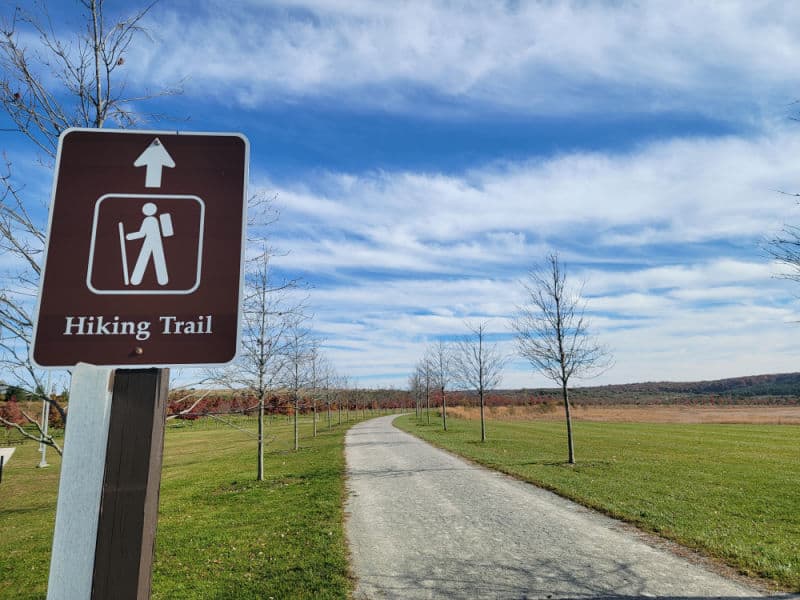 There are three designated walking trails within the memorial.

The Western Overlook Trail, The Trail of Remembrance, and the Allee.

How to beat the crowds at Flight 93 National Memorial?

There was a small crowd during our visit to the park. It was easy to maneuver our way around people and have space. 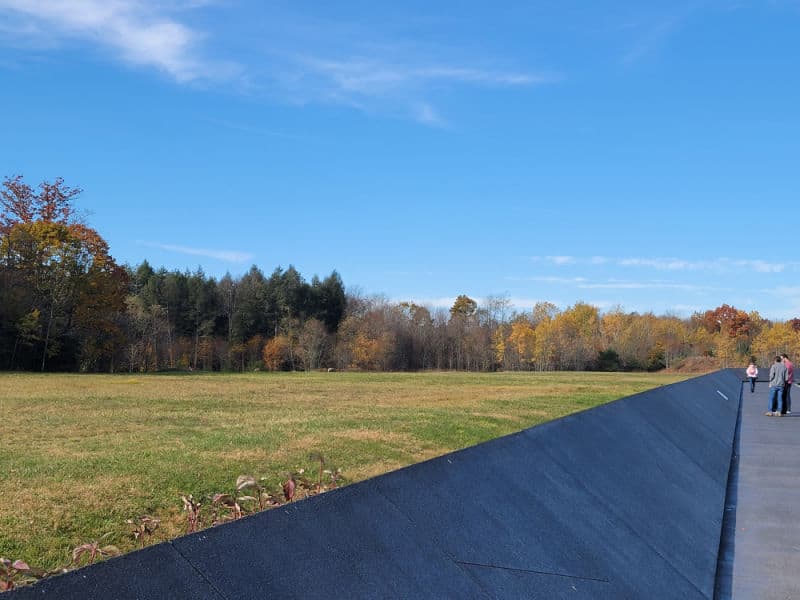 Where to stay when visiting Flight 93 National Memorial

Lodging can be found nearby including:

Fairfield Inn & Suites by Marriott Somerset - This is the hotel we stayed at and it worked great for visiting the park. Take advantage of free breakfast, a grocery/convenience store, and dry cleaning/laundry services. In addition to a 24-hour gym and a 24-hour business center, guests can connect to free Wi-Fi in public areas.

The Lodge at Indian Lake - you can look forward to a free continental breakfast, 18 holes of golf, and an outdoor entertainment area. Tee up with amenities like a driving range and golf caddies at this hotel. Stay connected with free in-room Wi-Fi, and guests can find other amenities such as 2 bars and a restaurant.

Comfort Inn - Take advantage of a free breakfast buffet, dry cleaning/laundry services, and a gym at Comfort Inn. Stay connected with free in-room Wi-Fi, and guests can find other amenities such as a business center.

Hampton Inn Somerset - you can look forward to free continental breakfast, dry cleaning/laundry services, and a fireplace in the lobby. Free Wi-Fi in public areas is available to all guests, along with a 24-hour gym and a 24-hour business center. 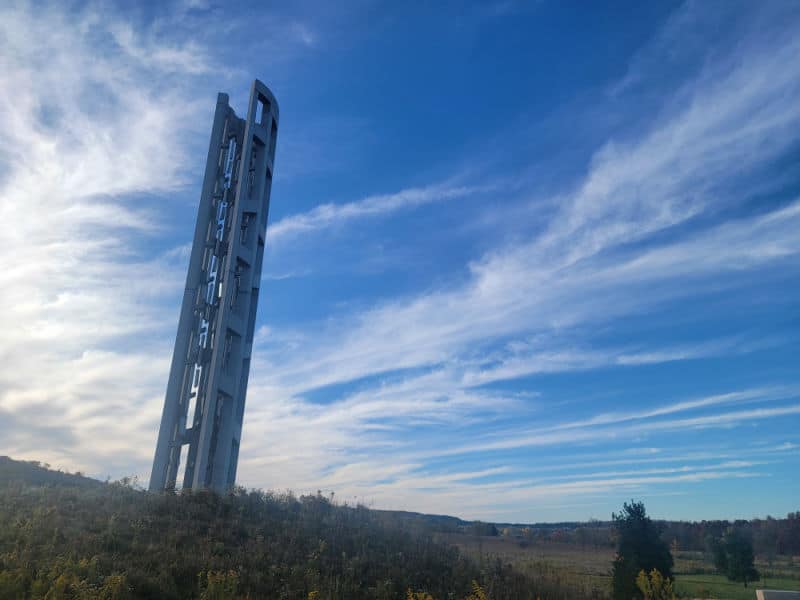