Epic Guide to Johnstown Flood National Memorial in Pennsylvania including this to see, how to get to the park, where to stay, and more. 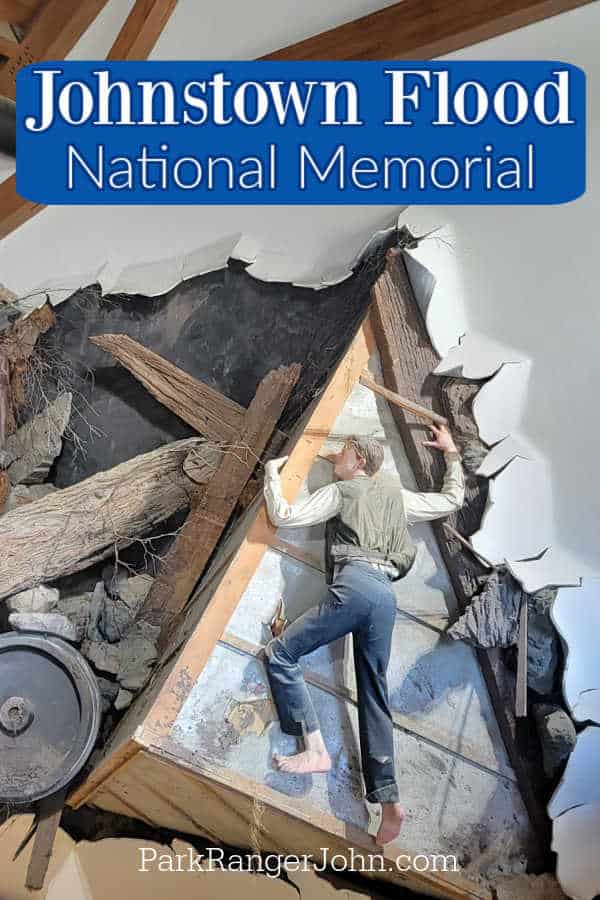 Johnstown Flood National Memorial shares the story of the May 31, 1889 South Fork dam failure which unleashed 20 million tons of water on Johnstown, Pennsylvania.

Yes, The park shares the story of a tragic event that happened in US History. The park is a bit dark and heavy due to the topic it is covering.

Be prepared for the park to not be very uplifting. It is a grim reminder of a dark moment in history.

If you are traveling with children we would advise skipping the movie or talking with them ahead of time about the topics that will be covered. 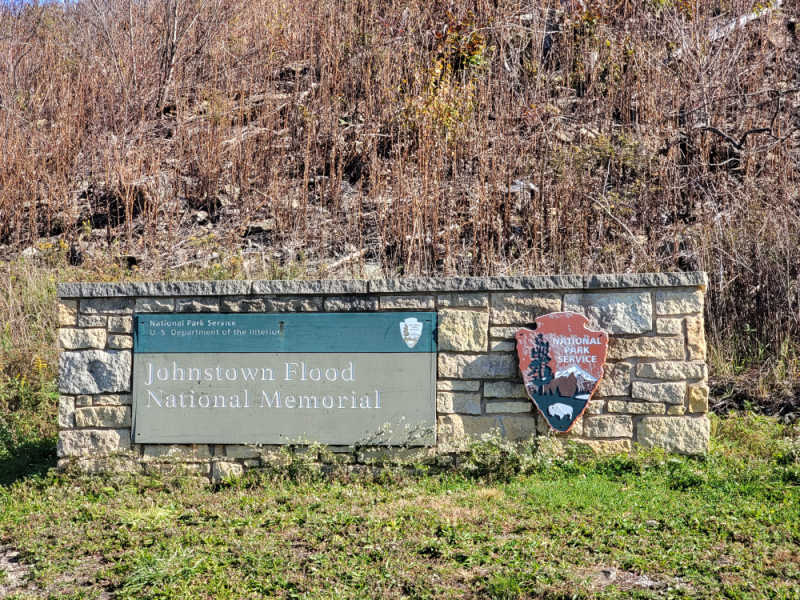 The National Memorial preserves the ruins of the South Fork Dam, which broke on May 31st, 1889. 20 million tons of water ripped through the immediate area, killing thousands of people in its path.

Johnstown Flood National Memorial not only preserves the ruins of the dam but several historic buildings dating to the period of the disaster.

In addition, the park is home to Lake View House, owned by the manager and president of the South Fork Fishing and Hunting Club.

50 volunteers from the American Red Cross, under the directorship of Clara Barton, went to help the survivors of the flood.

The Club House of The South Fork Fishing and Hunting Club

The Johnstown Flood National Memorial preserves the Club House of the South Fork Fishing and Hunting Club, which was the center of activity for the members.

The South Fork Fishing and Hunting Club owned the South Fork Dam. The public blamed the club for the dam collapse.

The Club House operated as a retreat for wealthy industrialists, where members could stay for two weeks each summer season.

The Club House, which initially boasted 17 bedrooms, was built in 1881. Upgrades were made to the Club House in 1887 to include 48 bedrooms and 16 cottages along Lake Conemaugh.

What Caused the Johnstown Flood?

Construction on the South Fork Dam began in 1838. The dam was built on the south fork of the Little Conemaugh River and was a part of the Pennsylvania Main Line Canal system.

The earthen dam was completed in 1853 but abandoned once the Railroad became the preferred method of transportation, replacing the need for canal systems.

The South Fork Fishing and Hunting Club bought the dam in 1880, built the clubhouse, and opened its retreat.

The dam was not maintained properly, which resulted in frequent leaks. The leaks were fixed with mud and straw. It has been suggested that this negligence contributed to the catastrophic events of May 31st, 1889.

When the club purchased the dam, the previous owner had removed crucial pipes that served to lower the water level when repairs needed to be made.

The dam was modified further to suit the needs of the club. The club built a carriageway across the dam, which meant they had to level the dam wall off, meaning the wall sat just a few feet above the water level.

Events Leading up to the Johnstown Flood

Johnstown was a flourishing steel town situated in a floodplain between the Little Conemaugh and Stony Creek rivers. The town was home to over 30,000 people when over 20 million tons of water swept through the area on May 31st.

On the morning of May 31st, after particularly heavy rain, Elias Unger, the president of the South Fork Fishing and Hunting Club, awoke to heavy rain outside his home, Lake View House.

Unger sent men to attempt to stop the water cresting the dam wall. At 11:00 am, John Parke, an engineer working on the dam began warning the people in the town of South Fork that the dam’s condition was dire. There were telegraphs sent to Johnstown to warn the residents there.

There were three warnings delivered to the South Fork Telegraph Tower, intended for Johnstown. Unfortunately, the first warnings did not make it to Johnstown because there had been several false alarms in the past.

The last warning reached Johnstown at 3:00 pm that afternoon. By this time, it was too late as the dam had already failed.

Eyewitness accounts describe the wall of water sweeping through Johnstown at approximately 4:00 pm, roughly an hour after the dam wall collapsed. Before reaching Johnstown, the 20 million tons of water swept through several small towns, picking up debris and leaving death and destruction in its wake.

The flood waters were traveling roughly 40 miles per hour when they crashed into Johnstown. People tried to reach the high ground to escape, Tragically, thousands of people were caught in the wave. Men, women, and children were washed away along with the debris.

When the water hit Stone Bridge, owned by the Railroad, the debris created a makeshift dam wall at the bridge. This created a surge back up the river.

The debris that caught at the bridge caught alight. An inferno raged for three days when the flood waters receded, killing 80 people who had become trapped there.

The Aftermath of the Johnstown Flood

In 1889 it was estimated that 2,209 people perished in the flood modern estimates place the number above 3,000. At the time, the flood was the largest loss of civilian life in the history of the United States.

The Johnstown flood was the worst flood of the 19th Century. Millions of dollars worth of damages were caused and thousands of lives were lost. The clean-up of the area continued for years after the disaster, and over 700 remains were left unidentified, buried in a mass grave. 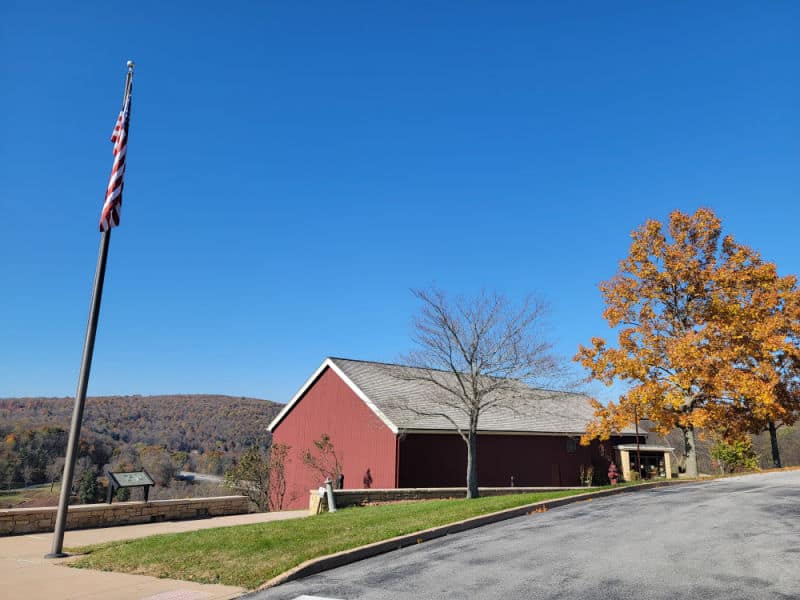 Things to know before your visit to Johnstown Flood National Memorial

Pets are allowed in the National Memorial with a few restrictions. Pets are not allowed in any public buildings or offices.

Pets must be on a leash of no more than 6 feet in length at all times.

We had pretty good cell service while in the park.

The park is closed on Thanksgiving Day, Christmas Day, and New Year's Day.

There is a nice size parking area near the visitor center.

There are at least 6 EV Charging stations within 10 miles of South Fork, PA. 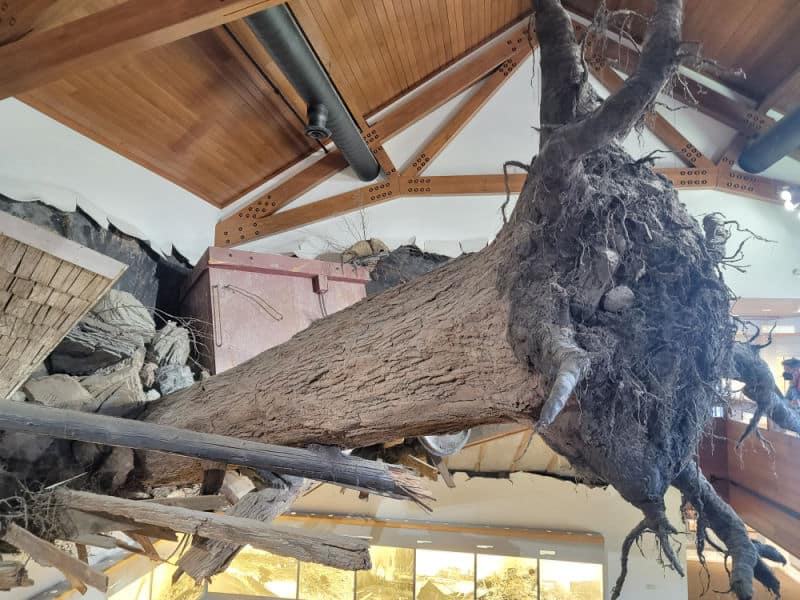 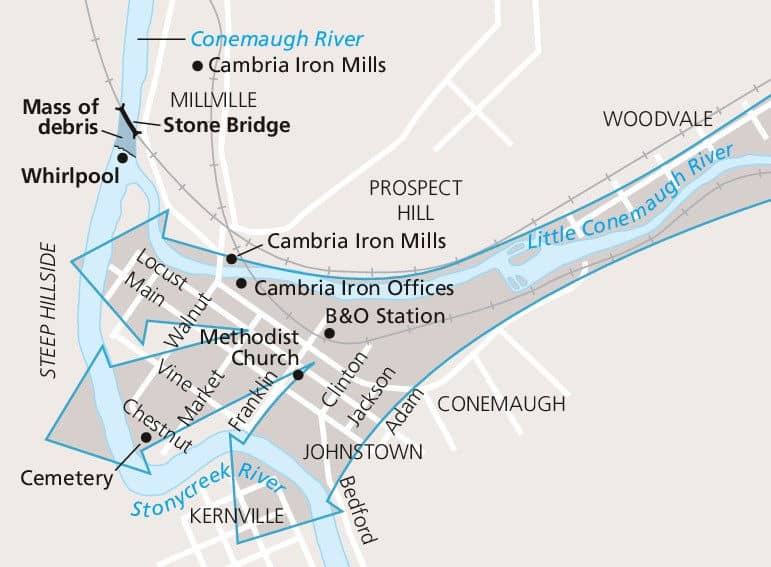 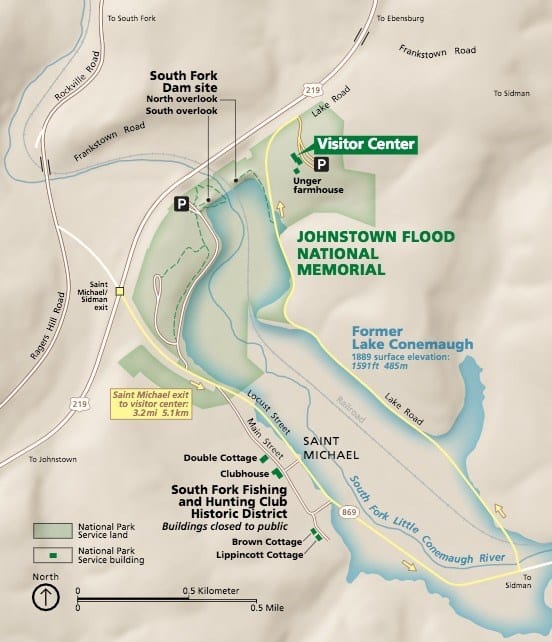 Where is Johnstown Flood National Memorial?

The visitor center is located near the Unger Farmhouse off of Highway 219. 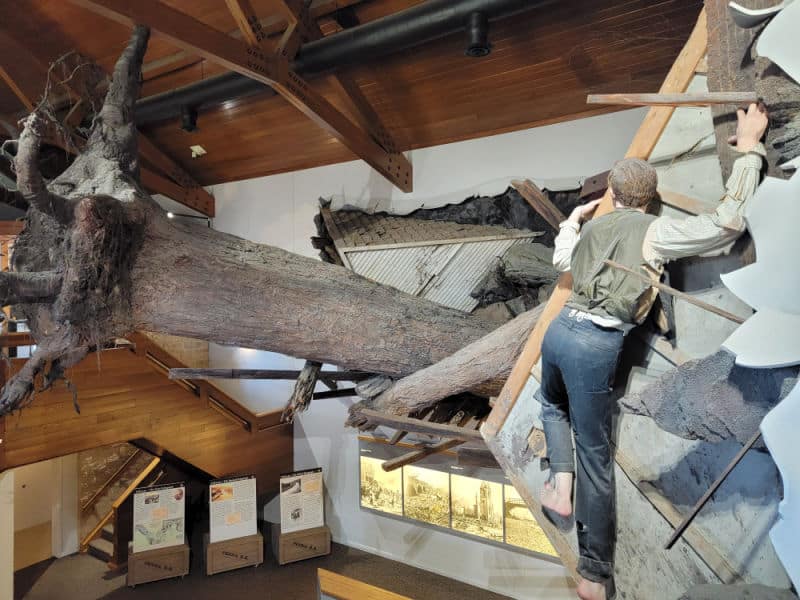 Getting to Johnstown Flood National Memorial

Travel approximately 1.5 miles on PA 869 watching for a left turn onto Lake Road at the sign for Johnstown Flood National Memorial.

Follow Lake Road 1.5 miles until the visitor center appears on your right. 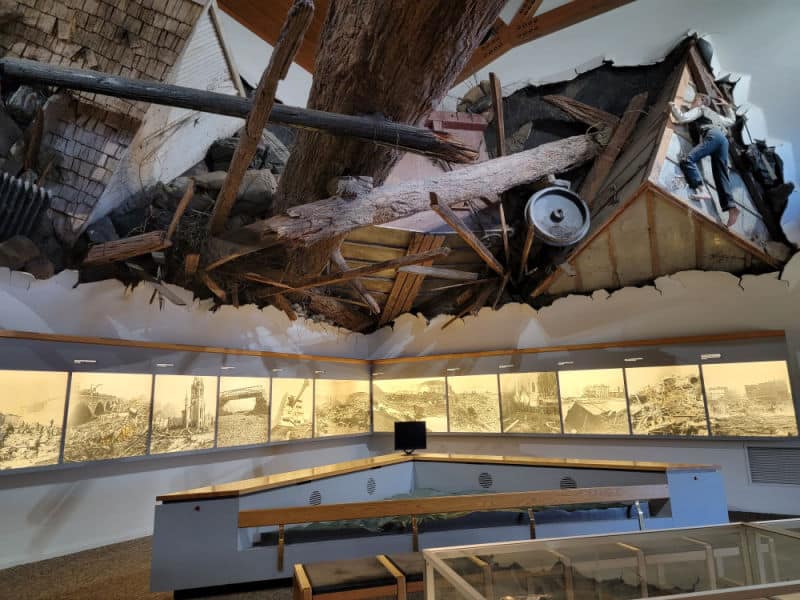 Most of the exhibits for the park are indoors. The best time to visit is when you don't have to deal with snowy driving to reach the park.

Summers are warm while winters are cold and snowy.

The warmest weather is from May 25 to September 16th with an average daily temperature above 72 degrees.

The coldest weather is from December 2nd to March 5th with an average daily temperature below 44 degrees.

Snow normally occurs between November 13th to April 7th with an average of 1 inch. 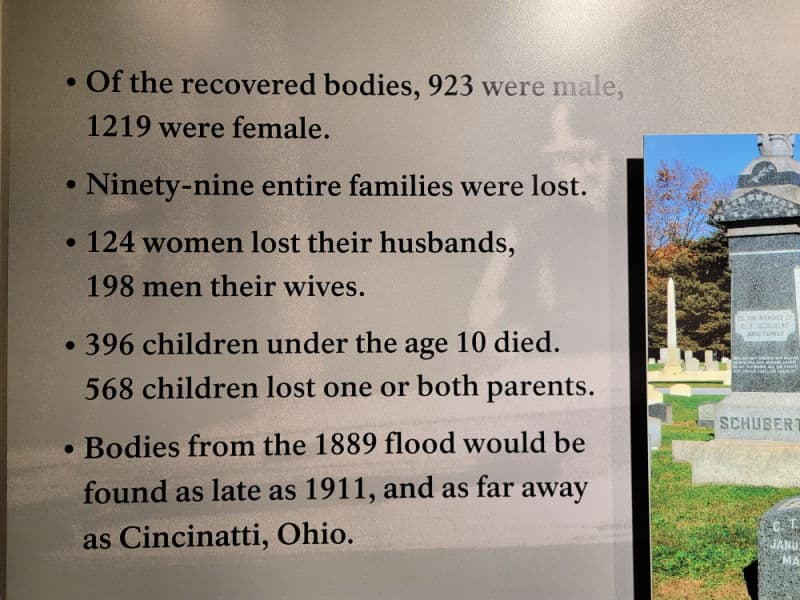 Best Things to do in Johnstown Flood National Memorial

The visitor center is the perfect place to start a visit to the park. There are two floors of exhibits, a park bookstore, and the park film "Black Friday'.

It starts with a gentleman walking through the cemetery talking about the casualties of the flood. It is the darkest film we have seen in a park.

Make sure to pick up a Junior Ranger program at the visitor center This is a great way to learn more about the park.

Visitors can drive by the Club House and nine cottages that were once owned by the South Fork Fishing and Hunting Club that are still standing.

There are park signs directing visitors to the Club House from Route 869.

Visitors can access the North and South Abutments on the remains of the South Fork Dam.

Interpretive panels on the abutments provide the history of the South Fork Dam and the flood.

The North Abutment, located on Lake Road, can be accessed via a boardwalk near the parking lot. Round trip, the walk is approximately 0.40 miles. The spillway can be also be seen.

Tales of the Great Flood Presentation

Friday through Sundays through the end of October you can attend a Tales of the Great Flood ranger talk in the visitor center theater between showings of the park film. 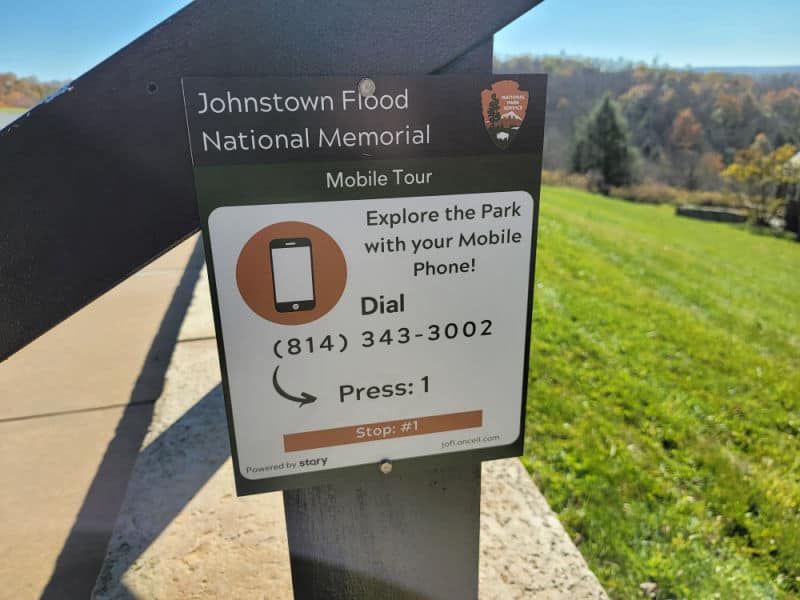 Location - off of the South Abutment Road near the parking lot

This trail takes visitors to the bottom of the dam, through the breach, and back up the other side.

There are interpretive panels providing the history of the Johnstown Flood.

The last portion of the walk is steep!

How to beat the crowds in Johnstown Flood National Memorial?

We did not experience any crowds during our visit to the park. There were maybe 4 other people there while we explored the visitor center.

Where to stay when visiting Johnstown Flood National Memorial

Comfort Inn & Suites - A free breakfast buffet, a free roundtrip airport shuttle, and dry cleaning/laundry services are just a few of the amenities provided at Comfort Inn & Suites. For some rest and relaxation, visit the hot tub. Stay connected with free in-room Wi-Fi, and guests can find other amenities such as a business center.

Click on the map below to find additional vacation rentals and hotels near the park. 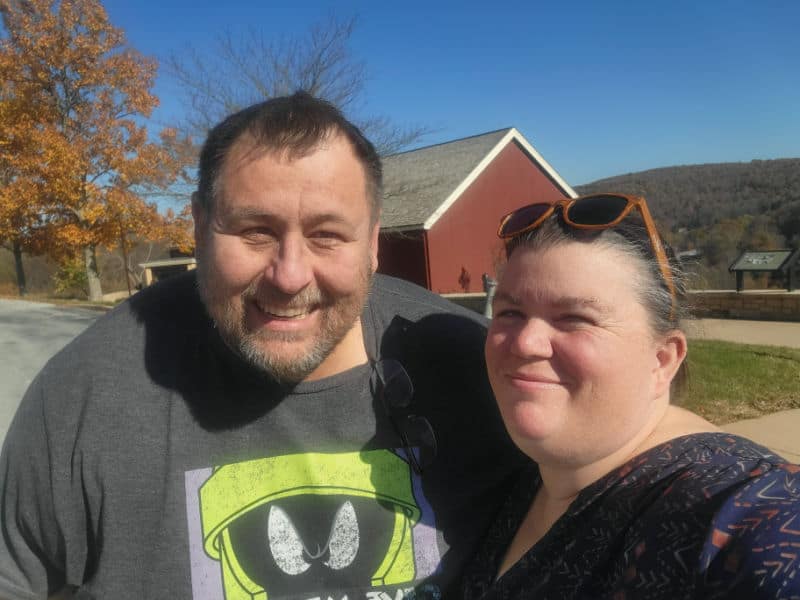