Epic Guide to Friendship Hill National Historic Site in Pennsylvania including things to do, how to get to the park, where to stay, and more. 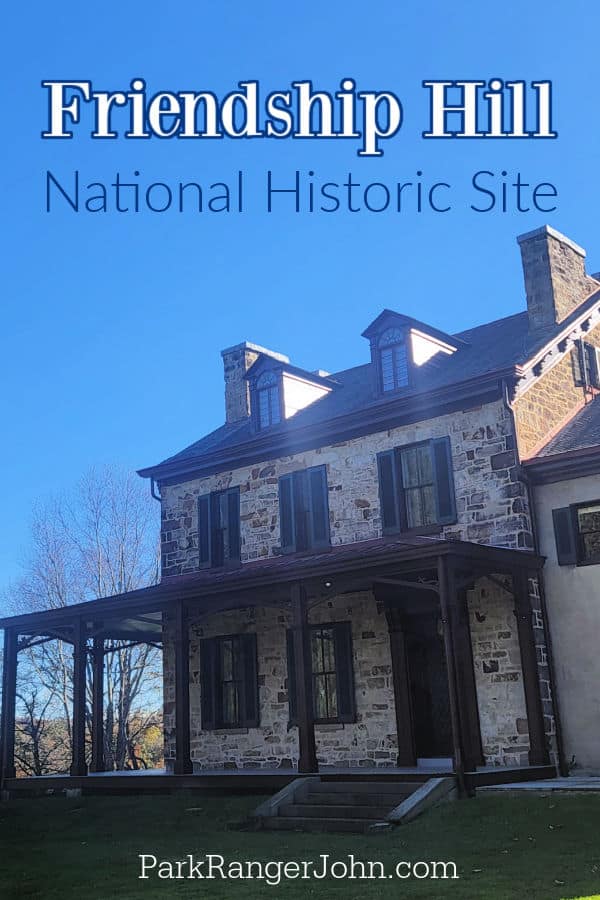 Friendship Hill National Historic Site preserves the home of the Swiss-American politician Albert Gallatin. Gallatin was the longest-serving Secretary of the Treasury. Gallatin served under two presidents; Thomas Jefferson from 1801 to 1809 and James Maddison from 1809 to 1814.

Gallatin is remembered for founding New York University, reducing the national debt, and funding Lewis and Clark's expedition into the Louisiana Territory. 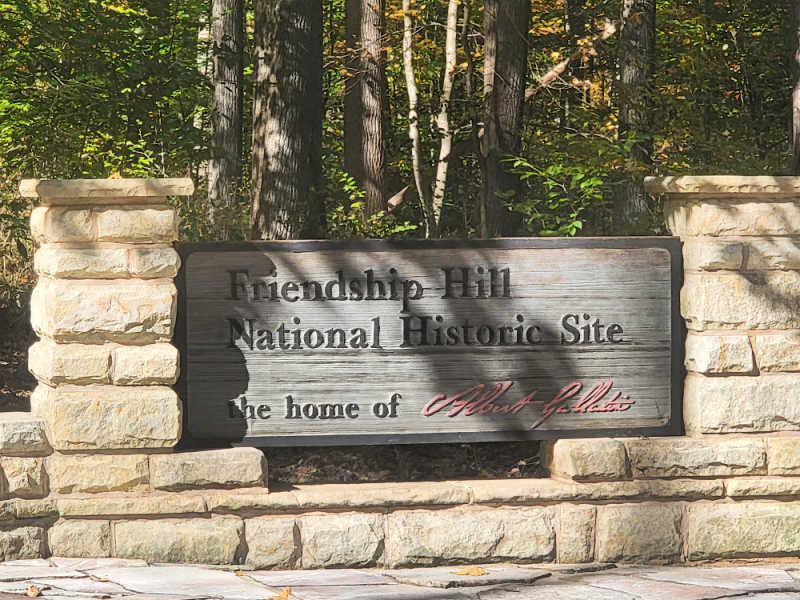 Yes, The park is beautiful and well worth visiting. The house is a self-guided tour so you can wander on your own and learn more about how the house changed over time.

There are amazing hiking trails and a fantastic picnic area to enjoy. 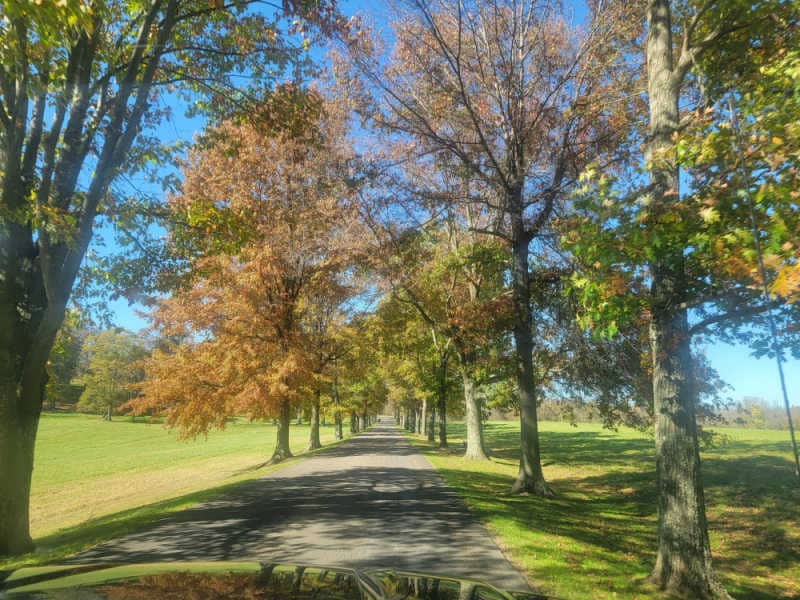 Who was Albert Gallatin?

Abraham Alfonse Albert Gallatin was born on January 29th, 1761, in Geneva, Switzerland. He moved to America in secret in the 1780s and is often referred to as ‘America’s Swiss Founding Father.”

After several failed business ventures and some time spent as a French tutor at Harvard College in New England, Gallatin became the business partner of French land speculator Jean Savary.

In 1785, Gallatin became a citizen of the United States of America. Gallatin purchased land amounting to 400 acres overlooking the Monongahela River in 1788.

Gallatin began building a stone house that would become known as Friendship Hill. Albert married twice in his life after he became a widower five months into his first marriage.

Friendship Hill sits on the highest point of the land owned by Albert Gallatin. The house is made up of seven sections, built in the federal architectural style. Over the years, several additions to the house were made. The original stone structure of Friendship Hill was built in 1789.

Gallatin entered the world of politics after another failed business venture in which he co-founded a company that aimed to attract Swiss Immigrants to settle in the United States. In 1788 Gallatin served as a delegate to a state convention for two years.

It was the first time in the history of the Senate that they opened the session, a practice which became the standard after Gallatin. Gallatin was strongly against the politics of the Founding Father, Alexander Hamilton.

Albert Gallatin and the Whiskey Rebellion of 1794

The poor farmers on the western frontier used the excess grain after their harvest to make whiskey. Whiskey became extremely important to the farmers, some of whom were neighbors to Albert Gallatin. Whiskey became the currency of the frontier.

In 1791 the Federal government passed a law introducing a tax on all distilled spirits. The law became known as the whiskey tax. For the government, the tax was a way to pay off some of its debt incurred during the Revolutionary War.

The farmers on the western frontier vehemently opposed the tax, with many refusing to pay. The penalty for violating the tax law was to attend Federal court in Philadelphia. This cost the farmers a great deal, as the city was 300 miles away from their farms.

The western farmers began violently protesting against the tax, by tarring and feathering tax collectors and intimidating them. Gallatin was against the law, and was elected the clerk in charge of its repeal.

When the rebels attacked the home of a tax collector by the name of John Neville, a farmer was killed.

Gallatin felt it was his responsibility to negotiate a peaceful resolution between the farmers and the government. Gallatin encouraged the farmers to comply with the tax or stop distilling.

Alexander Hamilton and George Washington felt the rebellion was dangerous and needed to be crushed by force. Washington, Hamilton, and 13,000 militia marched west.

Gallatin was warned to flee as Hamilton mistakenly believed Gallatin was an instigator in the Whiskey Rebellion. In the end, Gallatin's innocence was proven.

Albert Gallatin as the Secretary of the Treasury

In 1795, after the Whiskey Rebellion, Gallatin was elected into the United States House of Representatives. Gallatin chaired the Ways and Means Committee.

It was his handling of the Federal government's fiscal policies that made President Thomas Jefferson choose Gallatin to serve as his Secretary of the Treasury.

When Gallatin took charge as Secretary of the Treasury, the United States was over 80 million dollars in debt. It was Gallatin's job to reduce this number. Gallatin initially reduced the debt by two million dollars by selling public land and increasing taxes on imported items.

While in office, Gallatin arranged the purchase of the Louisiana territory in 1803. The Louisiana Purchase was extremely beneficial for the national debt, as it opened up the opportunity for more import tax through the harbor at New Orleans. The 800 thousand acres of land also presented the opportunity to sell public lands.

Gallatin was responsible for the building of the first major transportation route, known as the National Road. Gallatin ensured the Federal government had the funds to embark on the endeavor without falling further into debt.

Gallant left Friendship Hill in 1828 when he moved to New York City.

Pets are allowed in the park but need to be on a leash no longer than 6 feet in length.

Pets are not allowed in the visitor center or park buildings.

Cell service is generally available in the Gallatin House and on the historic knoll. Cell coverage on the park trails is spotty and differs by the carrier.

We had hit-and-miss coverage at the park. It was super random and not consistent.

Park Grounds are open from sunrise to sunset.

The visitor center is open from 9 am to 5 pm.

There is no Wi-Fi available at the park.

There is handicap-accessible parking near the house. There is a side road to reach this parking area.

There are at least 15 EV Charging stations within 10 miles of Point Marion, PA 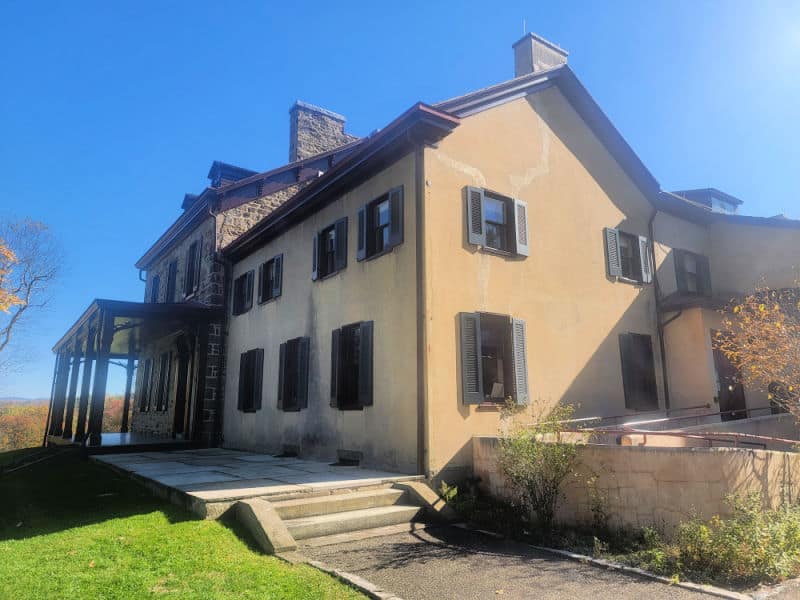 Friendship Hill NHS is located in southwestern Pennsylvania in Port Marion along the Monogahela River. 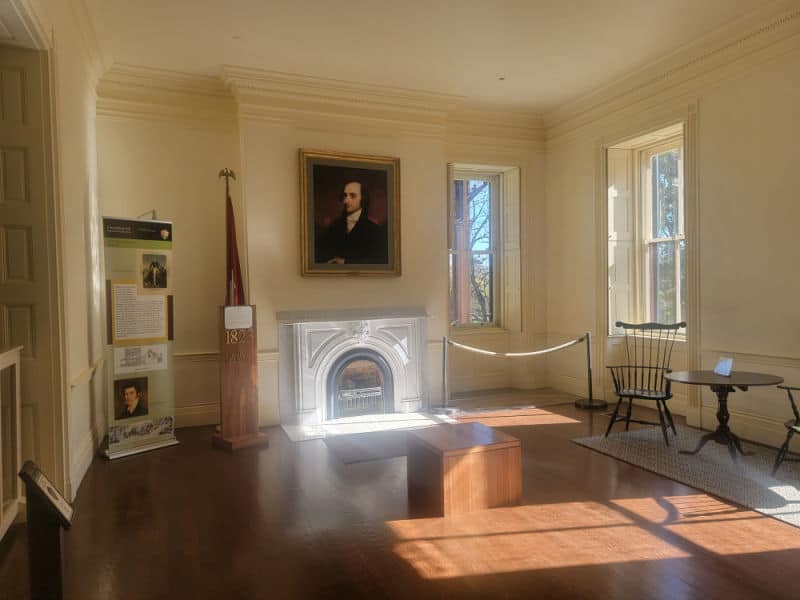 US 51 south to Uniontown US 119 South to Point Marion
PA 166 north - Park entrance is on left 3 miles north of Point Marion.

From the Pennsylvania Turnpike:
approx. 1 hr. 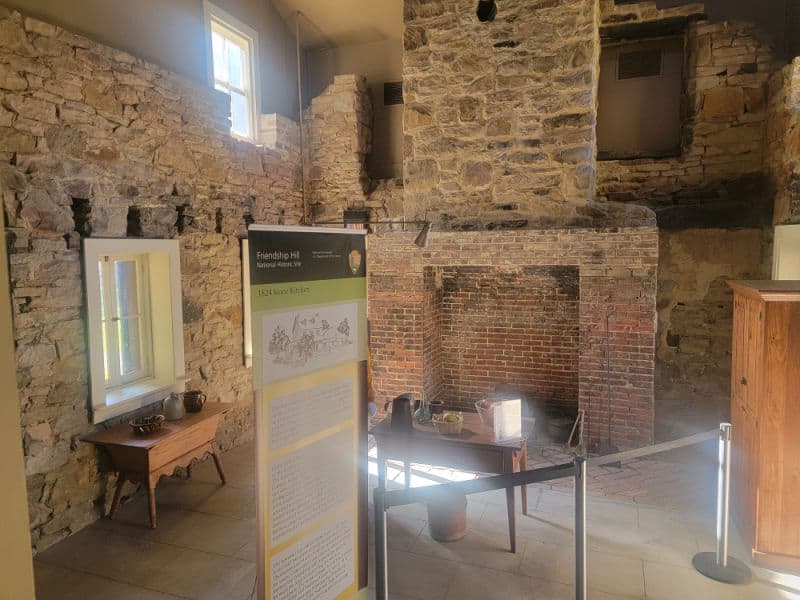 The best time to visit is spring through fall when there is no snow.

The warmest weather is from May 26th to September 19th with an average daily temperature above 74 degrees.

The coldest weather is from December 3rd to March 2nd with an average daily temperature below 47 degrees.

The snowiest weather occurs in February with an average of 3.5 inches of snow. 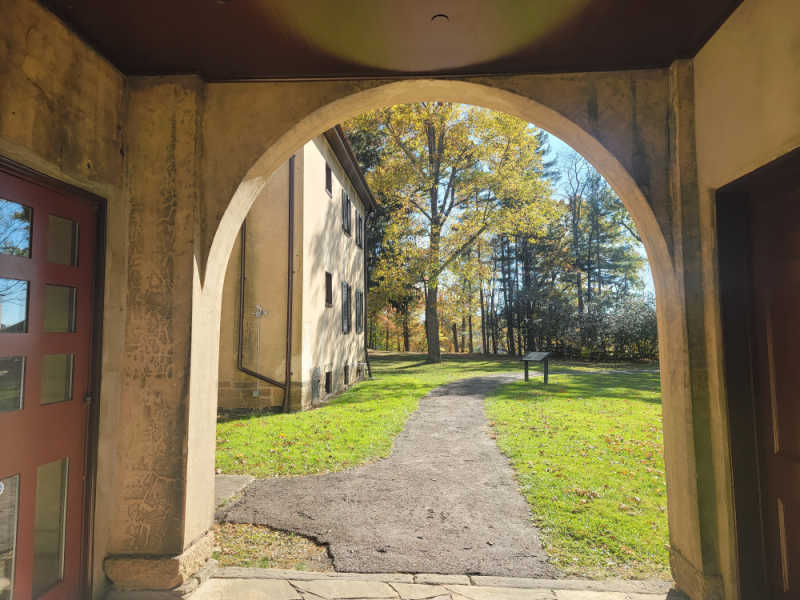 Best Things to do in Friendship Hill National Historic Site

Visitors can take a self-guided tour of Gallatin House. Portions of the house are open and contain exhibits and furnishing related to Gallatin's life.

The Friendship Hill NHS Junior Ranger program is designed for visitors ages 6 to 12. They also have an adult junior ranger program.

The Junior Ranger program can be filled out while walking through the house and watching the park films.

The Senior Ranger Program is designed for visitors ages 13 and up. The book can be picked up at Gallatin House Visitor Center.

The Senior ranger program is intense and you will want to plan a minimum of a couple of hours to fill it out.

We ended up taking the Senior ranger program home with us to fill out.

FestiFall is an annual celebration of the life of Albert Gallatin. The event is free and includes historic toys, live music, crafts, and more. 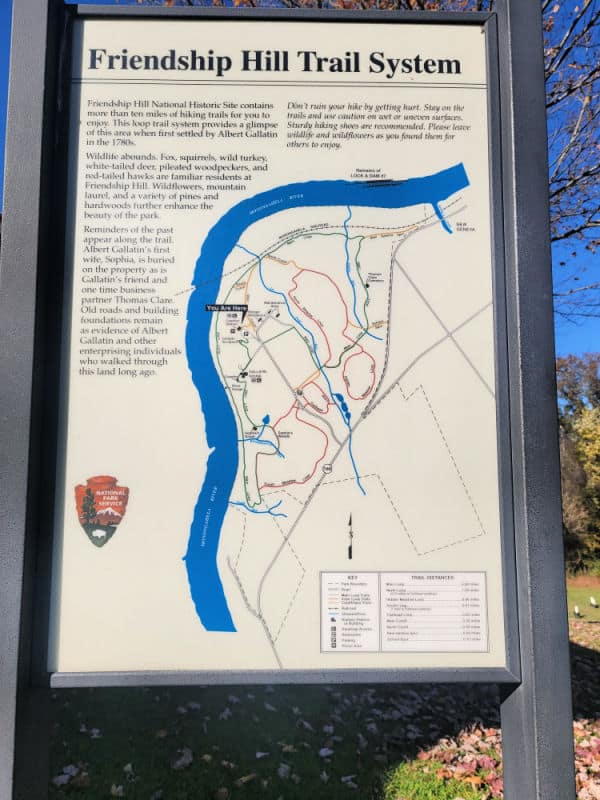 There are ten miles of trails at the park that give visitors the opportunity to experience the Allegheny Plateau.

The Friendship Hill Loop Trail system was designated a National Recreational Trail in 1984.

How to beat the crowds in Friendship Hill National Historic Site?

We did not experience any large crowds while visiting the park. We were able to easily move around the house and grounds. 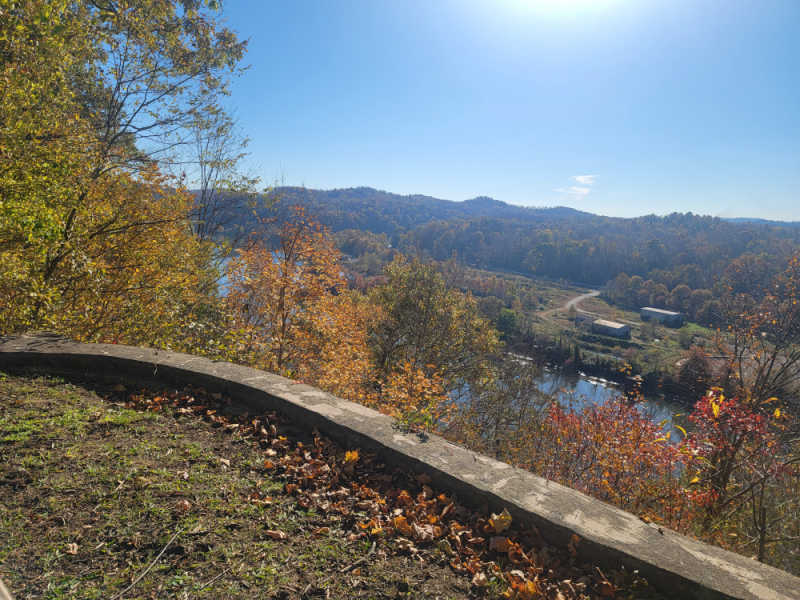 Where to stay when visiting Friendship Hill National Historic Site

There are National Park Lodges within the park.

Lodging can be found within 10 miles of the park including:

Lakeview Golf Resort, Trademark Collection by Wyndham - Take advantage of 36 holes of golf, a terrace, and shopping on site at Lakeview Golf Resort, Trademark Collection by Wyndham. Get out on the links at this resort and enjoy amenities such as golf lessons. For some rest and relaxation, visit the sauna or the steam room. The gym offers yoga classes and aerobics classes; other things to do include basketball, racquetball/squash, and rock climbing. Stay connected with free in-room Wi-Fi, and guests can find other amenities such as a garden and a hair salon.

Courtyard Morgantown - Consider a stay at Courtyard Morgantown and take advantage of a grocery/convenience store, a terrace, and a coffee shop/café. The onsite bistro, The Bistro, features American cuisine and happy hour. In addition to a garden and a library, guests can connect to free in-room Wi-Fi.

Click on the map below for additional lodging and vacation rentals available in the area. 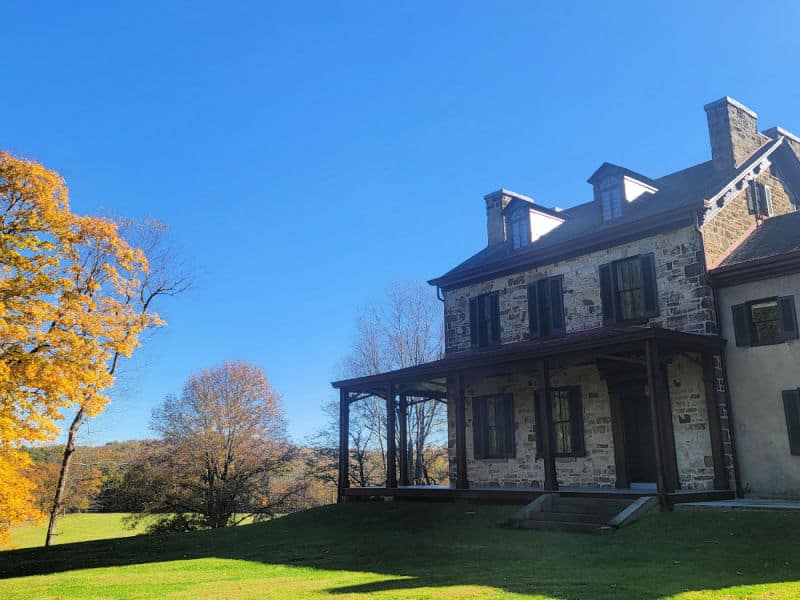