Complete Guide to James A Garfield National Historic Site in Ohio including things to do, directions, history, and so much more. 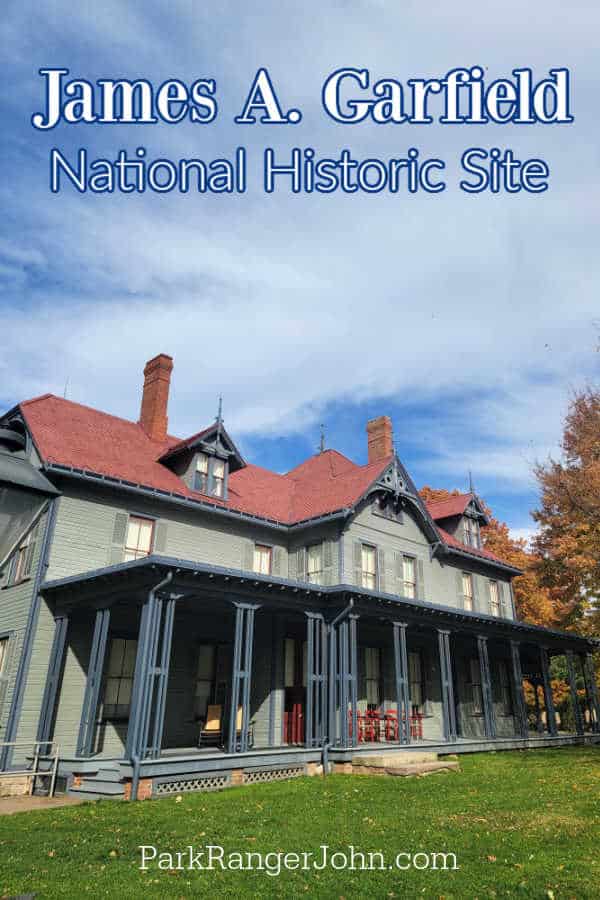 The James A Garfield National Historic Site preserves the home and estate of the United States 20th President, James Abram Garfield. The site also boasts the first presidential library to be established.

Is James A Garfield National Historic Site worth visiting?

Yes, The park has a truly amazing visitor center filled with information. I would plan a couple of hours to visit the park and visitor center. 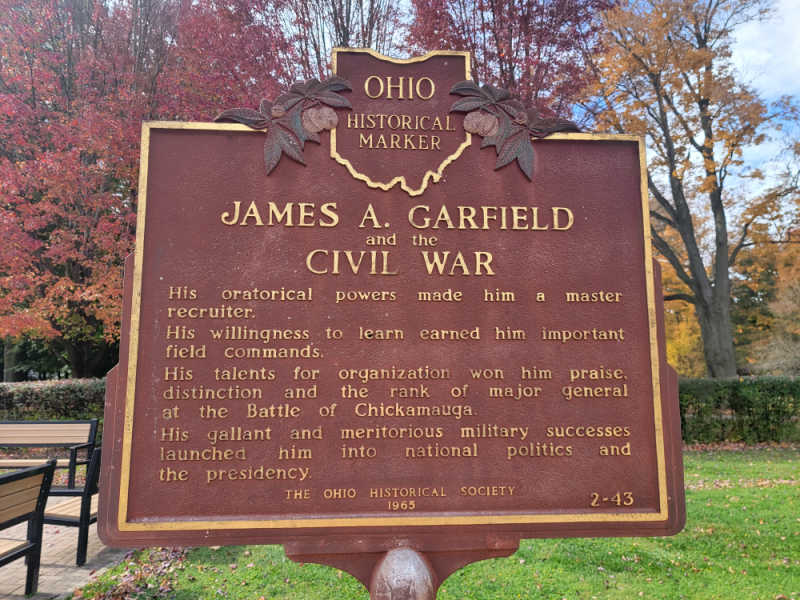 The home of the 20th president of the United States, which would come to be known as "Lawnfield” to the press, is significant because it was where Garfield ran his campaign. The presidential campaign of 1880 was the first time a presidential candidate had conducted a successful front porch campaign.

Garfield served as a general during the American Civil War and was a lawyer by trade. Sadly, Garfield was not in office long. Garfield was shot after being president for four months. He died two months later.

Who was James A. Garfield?

James Abram Garfield was born on November 19th, 1831, the fifth child of Abram and Eliza Garfield. The Garfields were not wealthy, so the 20th president was born into poverty, spending his early years in a log cabin on a farm in Ohio.

Garfield's father sadly passed away when he was only 18 months old. Garfield was raised by his mother. The Garfield family was extremely close, despite the hardships they faced. Garfield's mother encouraged him to get a proper education, which he did.

In 1853 Garfield began teaching at the Electric Institute, becoming the head of the college a year later. Garfield was a keen debater, and in 1859 after a public debate over the creation of the universe with an atheist, Garfield was nominated for a Republican seat in the Ohio Senate.

Garfield served in the Senate for two years, during which time tensions began rising between the southern and northern states of America concerning slavery.

Garfield made it clear he did not condone nor support the practice of owning slaves, nor did he support the South's wish to break away from the North.

James A. Garfield During the American Civil War

In 1861 tensions between the North and the South turned violent, with the outbreak of the American Civil War. Garfield left the senate and joined the military. Garfield was made a Lieutenant Colonel and placed in charge of volunteer infantry, who trained at Camp Chase.

Early in the war, Garfield and his men were victorious in the 1862 Battle of Middle Creek, where Garfield and 2,100 men went up against 5,000 Confederates.

In 1863 Garfield fought in the Battle of Chickamauga under the command of General William Rosecrans. It was during the battle that Garfield was promoted to Major General for his bravery. Garfield rode through Confederate lines to ensure the Union evacuation of troops was successful.

In 1879, the Republican Party chose Garfield as their presidential candidate for the 1880 election. After the Civil War, the racial issues in the Southern states did not simply disappear. African Americans living in the South were denied many basic rights. They were denied jobs or homes because of the color of their skin.

Garfield supported President Rutherford B. Hayes in handling the matter in the South, which the Democrats seemed to want to inflate. It was Garfield's unwavering support of Hayes which sparked talk of him being the next presidential candidate.

In 1880 Garfield was elected into the United States Senate. At the Republican convention later that year, Garfield was nominated as a presidential candidate in a surprise vote. There is some debate as to whether Garfield knew of the plan to include him in the ballot, or not.

After the Republican Convention, Garfield returned to his home, on his farm in Ohio, now protected by the National Park Service. Images appeared in the papers of Garfield's return home where he was greeted lovingly by his family, and well-wishers.

Thousands journeyed to Garfield's home throughout his campaign to meet the surprise candidate.

Garfield was a brilliant public speaker and had a passion for people so he broke tradition slightly, and spoke to those who flocked to his front lawn, from his porch.

Before Garfield's campaign, presidential candidates did not openly campaign on their behalf, instead party members and other politicians assumed that role. Garfield changed this by taking a public role in his campaign, which he conducted from his front porch.

Garfield won the presidential election of 1880, becoming president of a nation beginning to heal from the horrors of the Civil War. His party, however, was still bitterly divided.

What Happened to James A Garfield?

When Garfield took office in 1880, there were several problems within the party that he inherited. One such problem was with New York, Senator Roscoe Conkling. The senator was constantly placing pressure on the newly elected Garfield to fill positions in government with New Yorkers.

Garfield decided to challenge Conkling rather than give in to the pressure. Garfield appointed an adversary of Conkling’s to be the Collector at the Port of New York, resulting in Conkling feeling attacked by the president.

After months of stalking President Garfield, Guiteau shot the president in the back and arm on July 2nd, at the Baltimore and Potomac Railway Station. Two months later, Garfield died on September 19th in the presence of his wife and daughter. 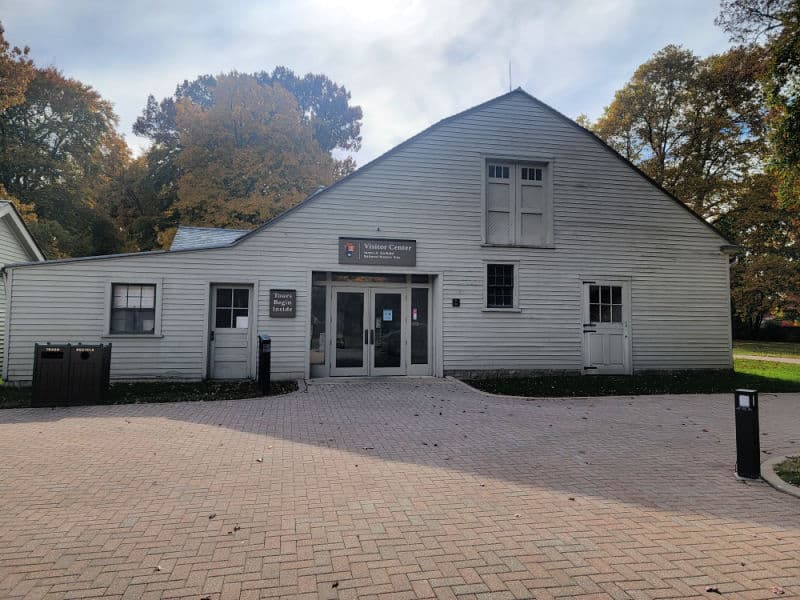 Pets are allowed on park grounds as long as they are on a leash less than 6 feet in length.

Visitors can join the B.A.R.K. Ranger Program with their dog and get a park dog tag.

Booklets are available at the visitor center.

We had great cell service at the park.

There is no public Wi-Fi available at the park.

There is a fairly good size parking lot near the visitor center. 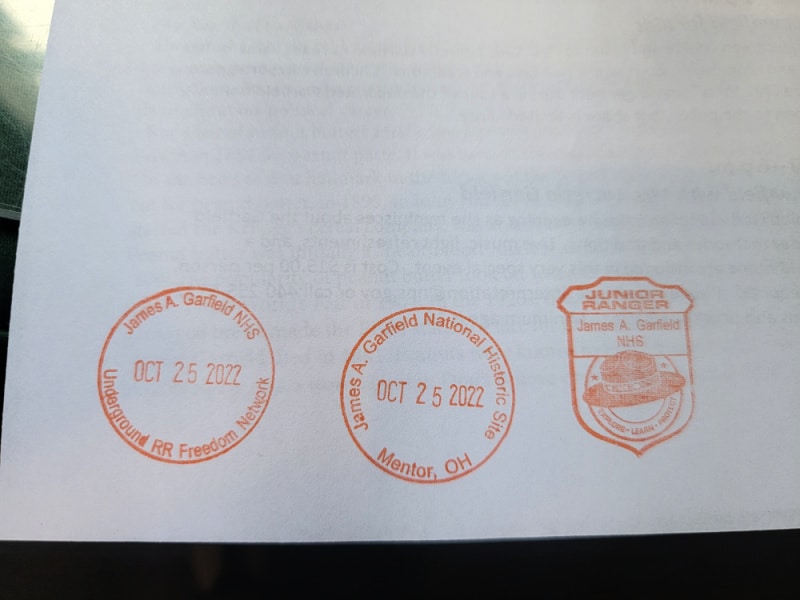 James A Garfield NHS is part of the 2018 Passport Stamp Set.

The park has 2 stamps:

There are at least 20 EV Charging stations within 10 miles of Mentor, Ohio. 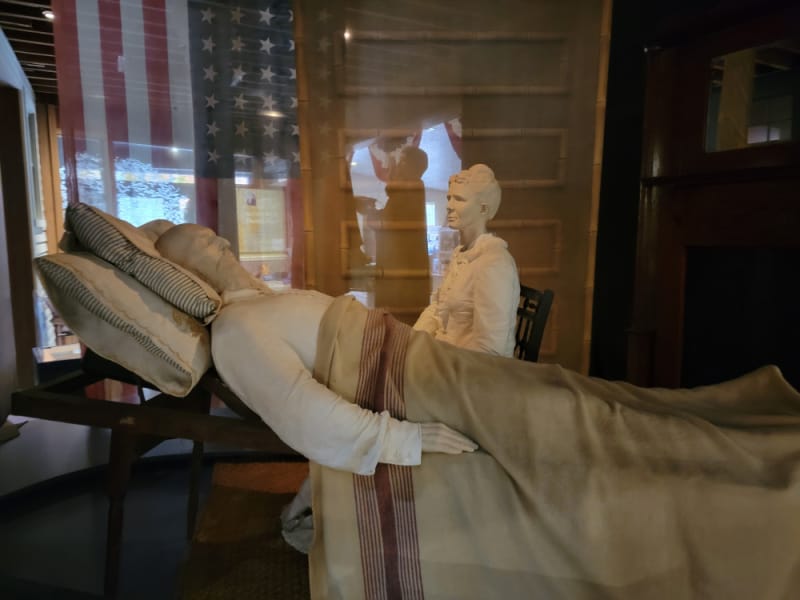 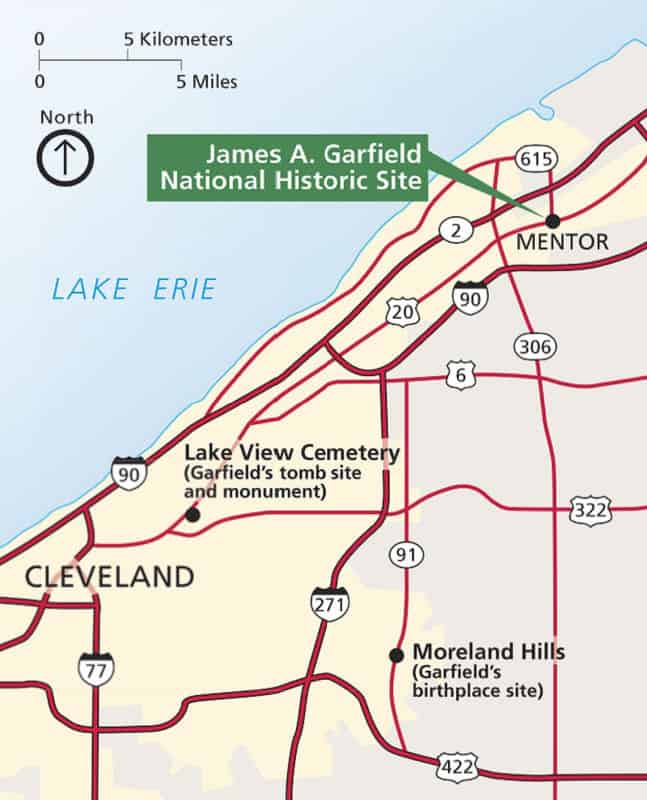 Where is James A Garfield National Historic Site?

James Garfield NHS is located in northern Ohio near Cleveland near the shores of Lake Erie. 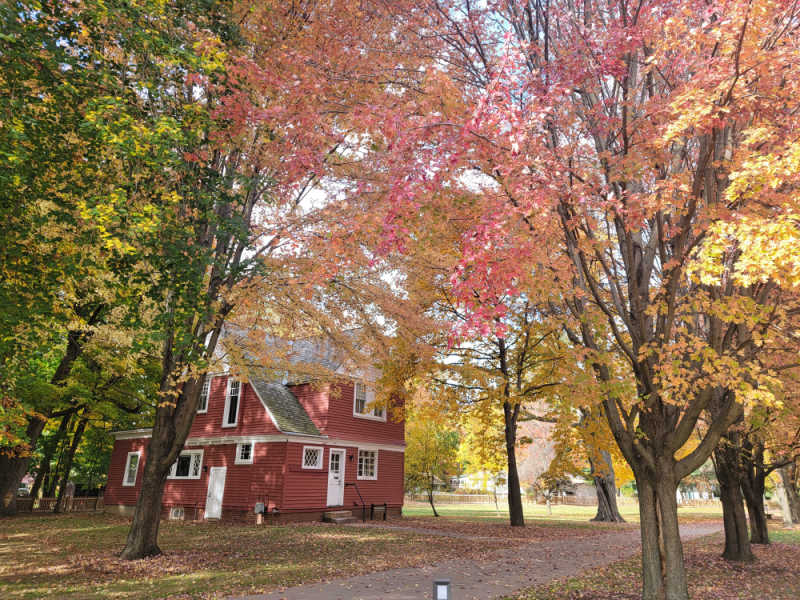 Getting to James A Garfield National Historic Site

From I-90, exit at Route 615 (Center Street). Turn left (north) on 615 and follow to Route 20 (Mentor Avenue). Turn left (west) on Route 20. The site is a few blocks down on the right-hand side, immediately after Faith Lutheran Church.

From State Route 2, exit at Route 615. Turn right (south) on 615 and follow to Route 20 (Mentor Avenue). Turn right (west) on Route 20. The site is a few blocks down on the right-hand side, immediately after Faith Lutheran Church. 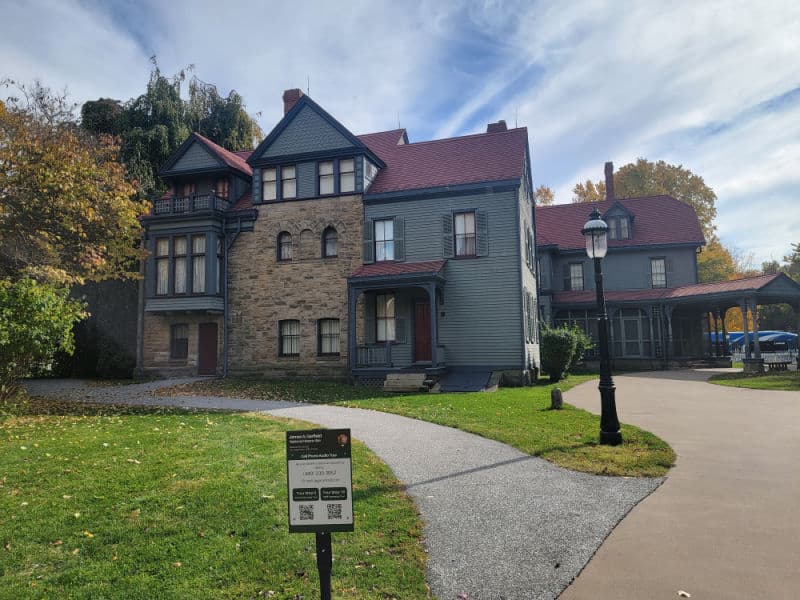 The best time to visit the park is late spring through fall when there is hopefully no snow to contend with.

The warmest weather is from May 30th to September 19th with an average daily temperature above 72 degrees.

The coldest weather is from December 4th to March 12 with an average daily temperature below 44 degrees.

The snowiest month is February with an average snowfall of 3.6 inches. 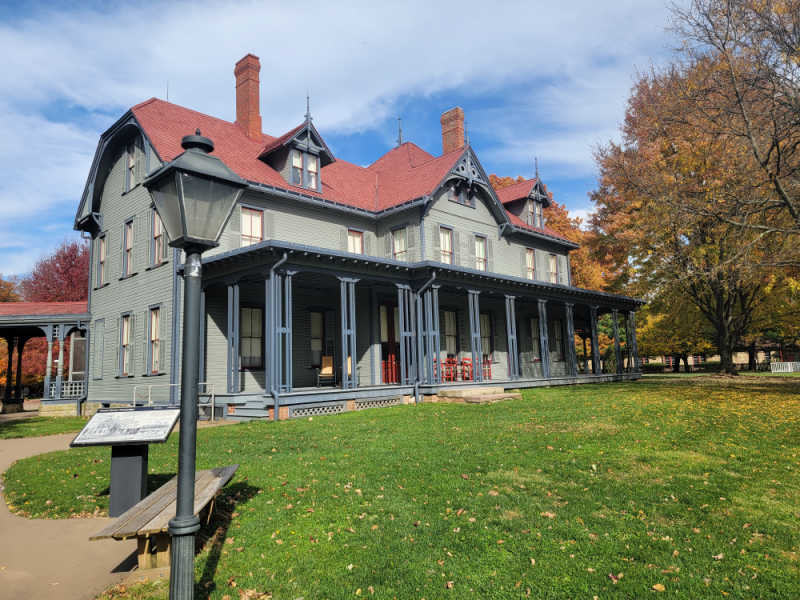 Best Things to do at James A Garfield National Historic Site

The visitor center is the perfect place to start a visit to the park. There is an 18-minute biographical movie about James Garfield.

The visitor center is located in the Carriage House and Horse Barn behind the Garfield House.

The visitor center has epic interpretive displays that have a ton of information. Plan time to check out the displays and watch the movie.

The Junior Ranger program can be picked up at the visitor center. It is a great way for visitors of all ages to learn more about the park.

The program can be filled out while visiting the visitor center and walking the grounds.

The park offers guided tours of the Garfield House. You can sign up for the tours at the front desk of the visitor center. 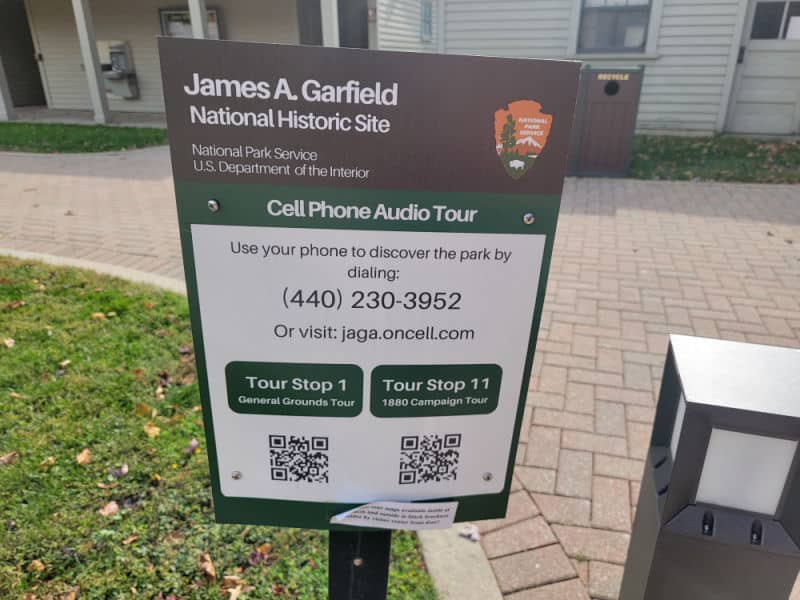 There are two themed cell phone tours on the grounds of the park.

Stops #1-#10 present a general overview of the Garfield site. 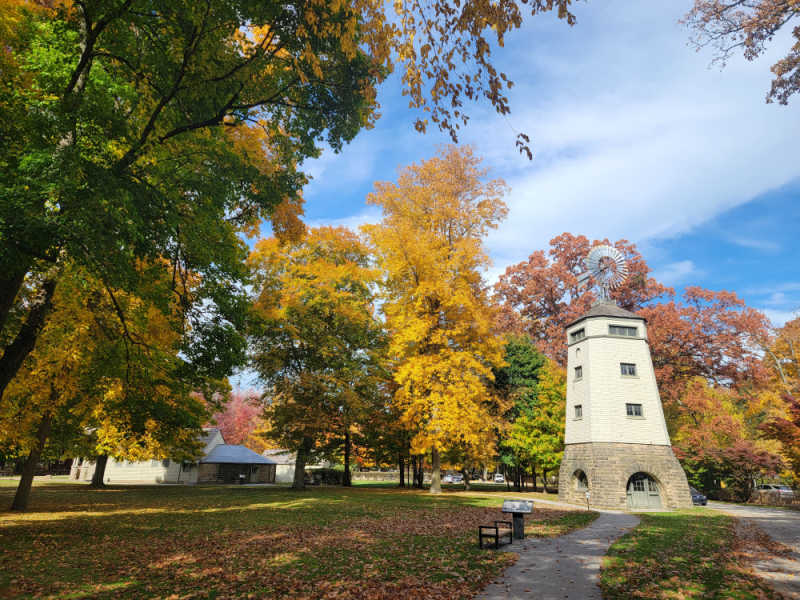 There are no hiking trails within the park. There is a path that leads from the visitor center to the historic house and surrounding grounds.

How to beat the crowds at James A Garfield National Historic Site?

We did not experience any crowds while visiting the park. There is a ton of room to explore and move around any groups. 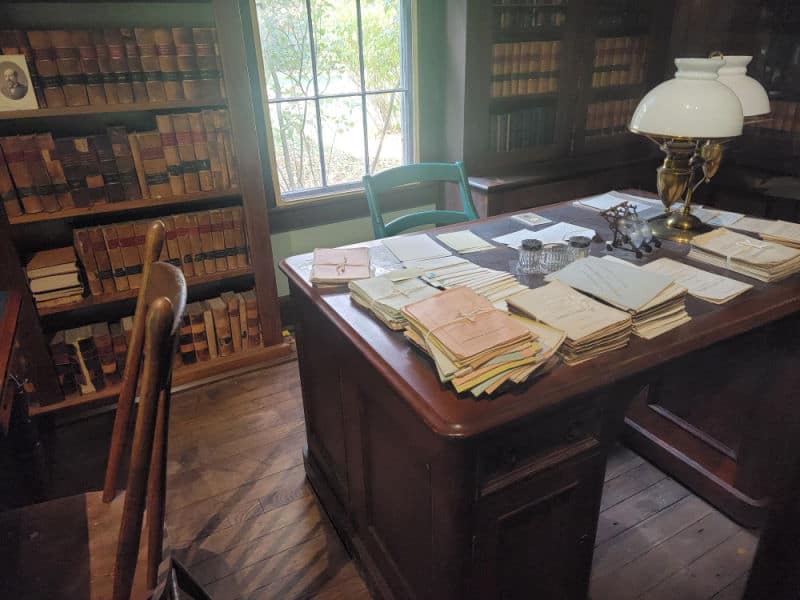 Where to stay when visiting James A Garfield National Historic Site

Lodging is available in Mentor, Ohio and nearby Cleveland.

Holiday Inn Cleveland Northeast - Mentor - You can look forward to a coffee shop/cafe, dry cleaning/laundry services, and a fireplace in the lobby at Holiday Inn Cleveland Northeast - Mentor, an IHG Hotel. The onsite restaurant, Krave Restaurant, features American cuisine. In addition to a bar and a 24-hour gym, guests can connect to free in-room Wi-Fi.

Best Western Plus Mentor-Cleveland Northeast - You can look forward to a free breakfast buffet, a free daily manager's reception, and dry cleaning/laundry services at Best Western Plus Mentor-Cleveland Northeast. The onsite bistro, Skye Restaurant & Pub, features American cuisine and happy hour. In addition to a fireplace in the lobby and an outdoor entertainment area, guests can connect to free in-room Wi-Fi.

Click on the map below to see additional lodging and vacation rentals near the park.

There are no National Park Campgrounds at the park.

For a fun adventure check out Escape Campervans. These campervans have built in beds, kitchen area with refrigerators, and more.

You can have them fully set up with kitchen supplies, bedding, and other fun extras. They are painted with epic designs you can't miss! 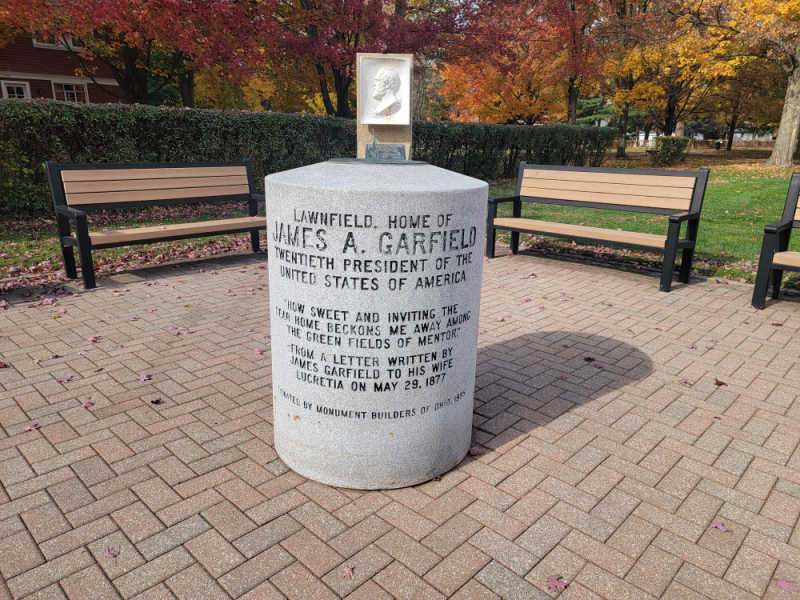