Complete Guide to Women's Rights National Historical Park in upstate New York including things to do and see, history, nearby lodging, and more. 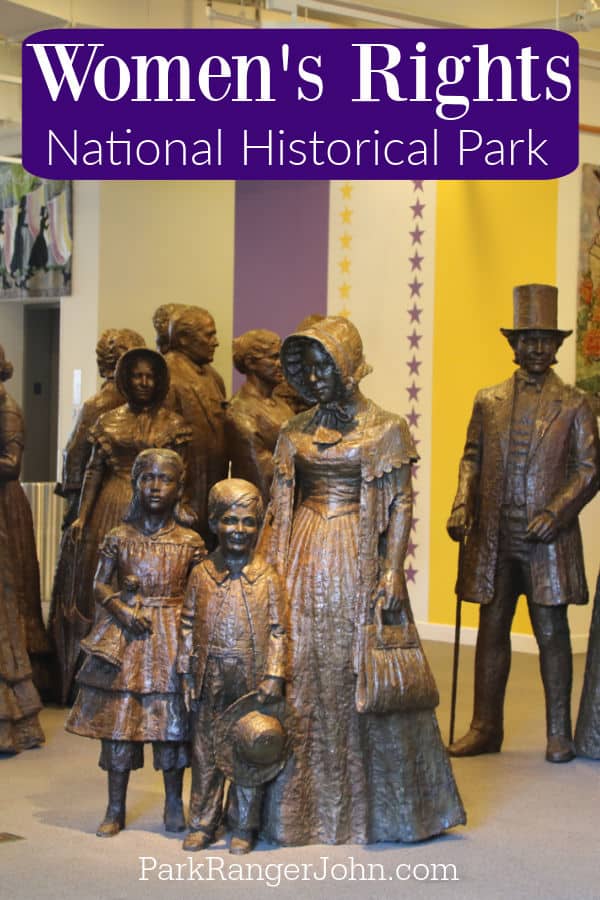 From July 19-20th, 1848 a history-changing event took place in the village of Seneca Falls, New York.

300 people gathered for the first women's rights convention and signed a Declaration of Sentiments stating "that all men and women are created equal." 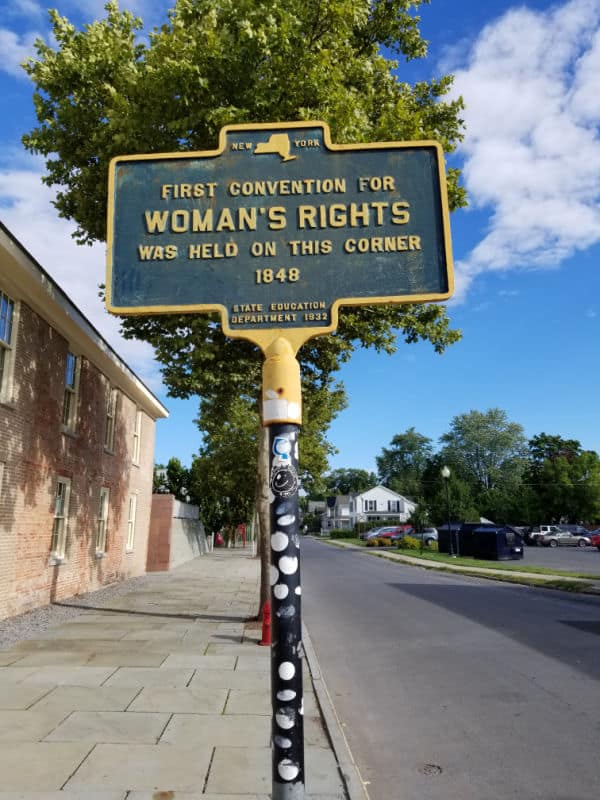 Is Women's Rights NHP worth visiting?

YES!! This National Historical Park is amazing! It does a wonderful job of showing not only the 1st Women's Rights convention but also the fight for rights today.

It consists of four points of interest: Wesleyan Methodist Church, The Elizabeth Cady Stanton House, the M’Clintock House, and the Richard Hunt House.

The formation of this historical spot was created to mark the occasion of the first Women’s Rights Convention or the Seneca Falls Convention.

One very influential woman is credited with beginning the movement that would eventually change the opportunities for all American women.

Elizabeth Cady Stanton was born in New York in 1815.  Elizabeth received a superior education and worked in the law office of her father.  It was there that she recognized many of the discriminatory laws that were aimed at women at that time.

In 1840, Elizabeth married lawyer and abolitionist Henry Brewster Stanton.  That same year the couple attended the World Anti-Slavery Convention in London and Elizabeth was appalled at being barred from entering because she was a woman.

Back in the United States, by 1848, Elizabeth was a mother of three and still bothered by the outright denial of women’s rights in America, and the world, at the time.

Fellow friends and Quaker abolitionists agreed and were determined that immediate action must be taken.  Supporters of the abolition of slavery were also supporters of women’s rights.

The organizers of this movement in New York were the families of the Motts, Wrights, Stanton's, M’Clintocks, and Hunts.  Noted abolitionist and former slave Fredrick Douglass was a strong supporter of the movement as well.

The Convention was held at Seneca Falls, New York, as this was the home of Stanton.  It was held on July 19th and 20th, 1948 at the Wesleyan Methodist Chapel.  Nearly 300 people showed up to the convention, mainly area residents.

It was at this time that Stanton drafted her “Declaration of Sentiments” which was signed by 100 men and women.

It declared that “all men and women are created equal” and that all women should be allowed the right to vote, own property, serve on juries, and access equal educational opportunities.

The two women, passionate for change, complimented each other beautifully as Anthony was an exceptional organizer and Stanton was a brilliant speaker and writer.

The Visitor’s Center lobby at the historic site houses the bronze sculpture entitled “The First Wave.”  This sculpture was commissioned after the historical site was established in 1993.

The sculpture depicts some of the women who were present at the convention in July of 1848, and also the men that were there to support them.

Although it took 72 years for this group’s dream of granting women the right to vote, this group was the “First Wave” of the fight for women’s rights which would continue for decades to come.

The Women’s Rights National Historical Park incorporates the relationship between the women’s rights movement and the anti-slavery movement.  The M’Clintock House is located in nearby Waterloo, New York.

The M’Clintocks were signers at the Seneca Convention, and their home was also a stop on the Underground Railroad.  The site offers education on the many connections between the two movements in the 19th century.

1950 Massachusetts was the site of the National Women’s Rights Convention in which many African Americans were in attendance.  It was here that a strong connection was formed with the Abolitionist Movement.

During the Progressive Era of 1890 and 1925, women from all social classes and backgrounds began entering roles in public life.  It was then that the term “Women’s Suffrage” became part of mainstream politics.

After World War I ended, Congress began the ratification process of the Nineteenth Amendment which states:

The Women’s Rights National Historical Park was established on December 28, 1980.  Surely the houses and sites that were chosen for this park were instrumental in beginning the fight for women’s rights in America.

Elizabeth Cady Stanton’s home that she shared with her husband and family from 1847 to 1862 was called the “Center of Rebellion.  It was here that many discussions and meetings took place when planning the movement.

The story of how the Seneca Convention came to be is brought to life at this historical park, and the significance of its role in changing life for American women is monumental. 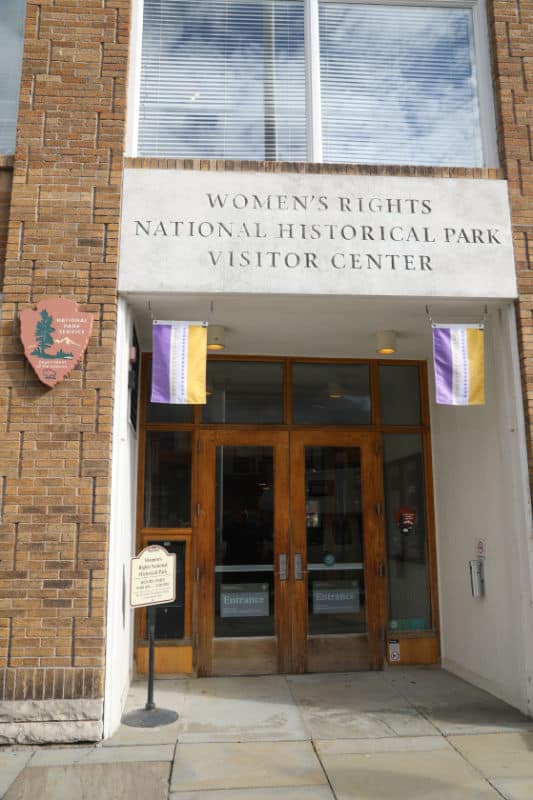 Pets are allowed in the outdoor areas of the park while on a leash.

Wi-Fi is available at the visitor center.

There is street parking and nearby parking lots by the park.

There are no gas stations within the park

Women's Rights NHP is the National Stamp for the 2020 Passport Stamp Set. 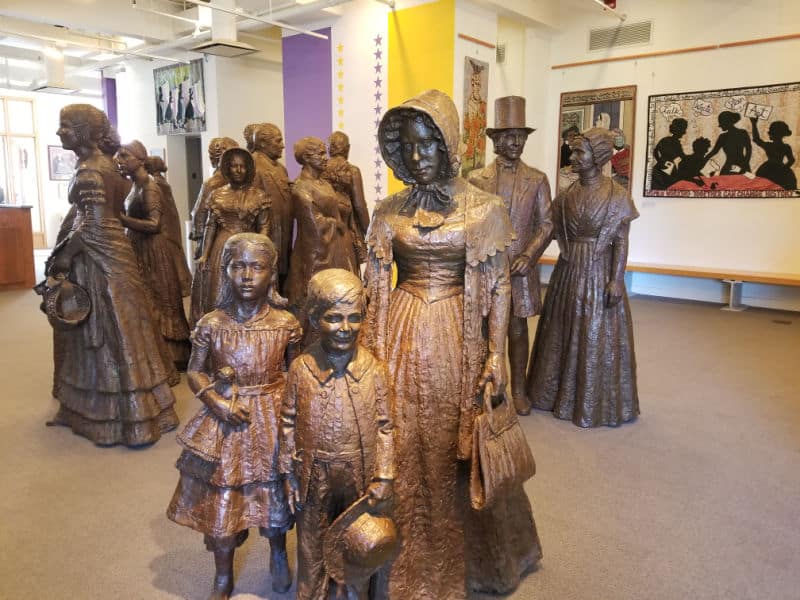 Check out how this National Historical Park compares to other National Parks by Size.

Women's Rights National Historical Park was created by Congress in 1980. 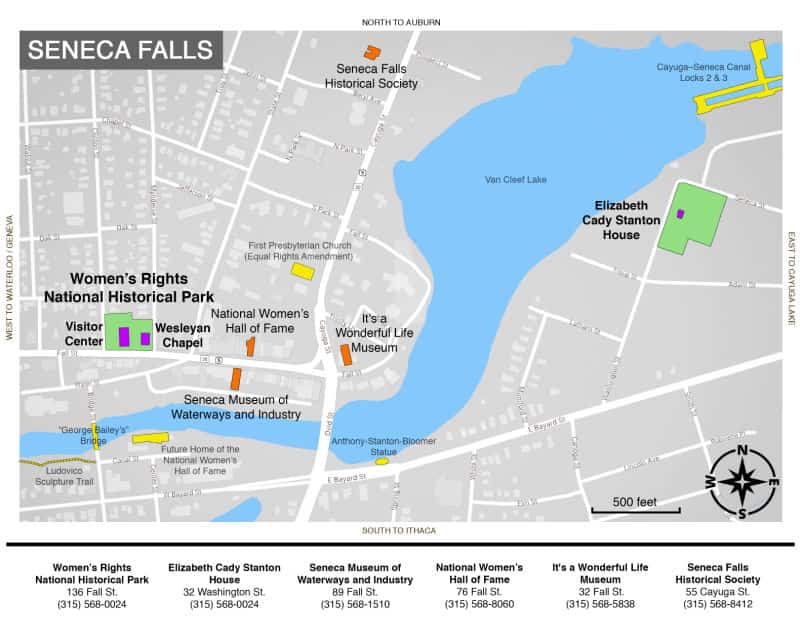 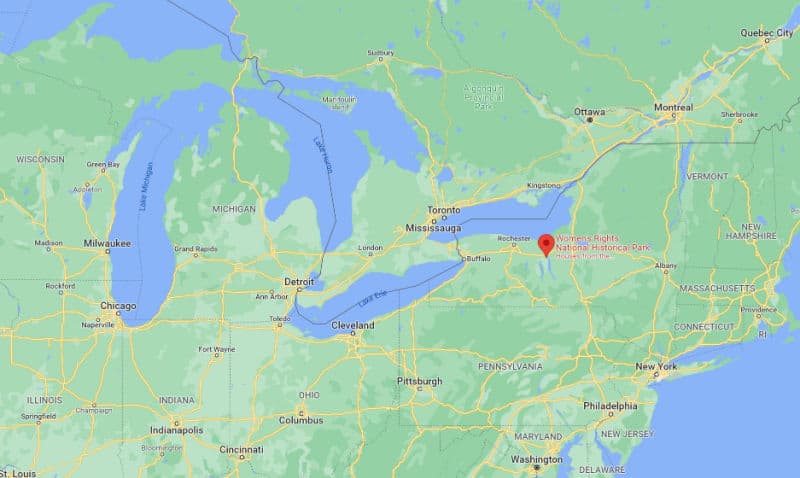 Ithaca, NY - 41 miles (Check out top things to do in Ithaca) 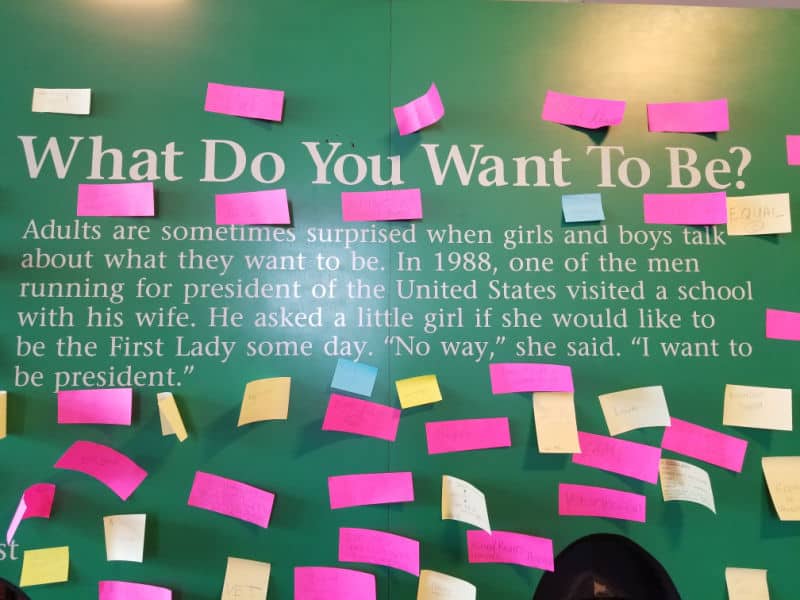 Follow for approximately one and a half miles into the Village of Seneca Falls. 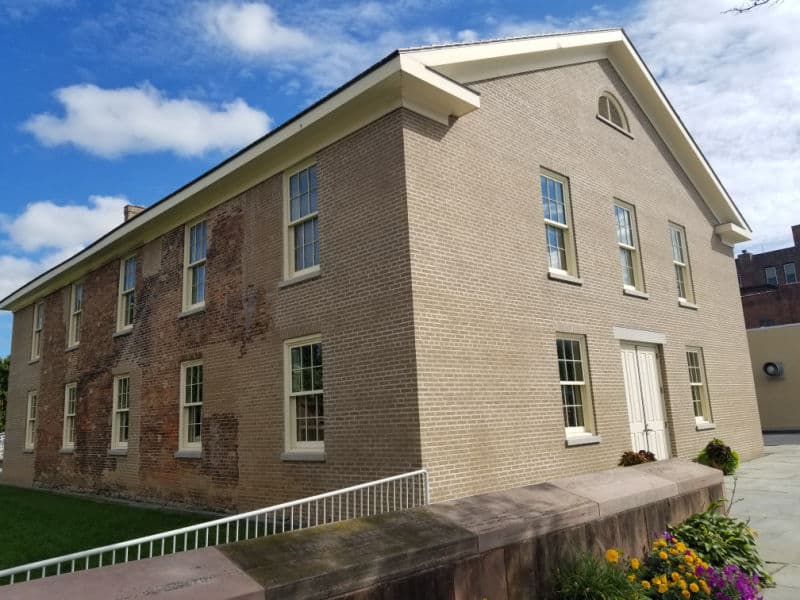 The best time to visit the park is really anytime other than winter unless you like snow.

The hottest temperatures are from May 26th to September 17th with an average daily temperature above 73 degrees.

The coldest temperatures are from  December 2nd to March 13th with an average daily temperature below 42 degrees.

The rainiest month is September with an average of 3.1 inches.

Snow occurs from November 10th to April 11th on average. The snowiest month is February. 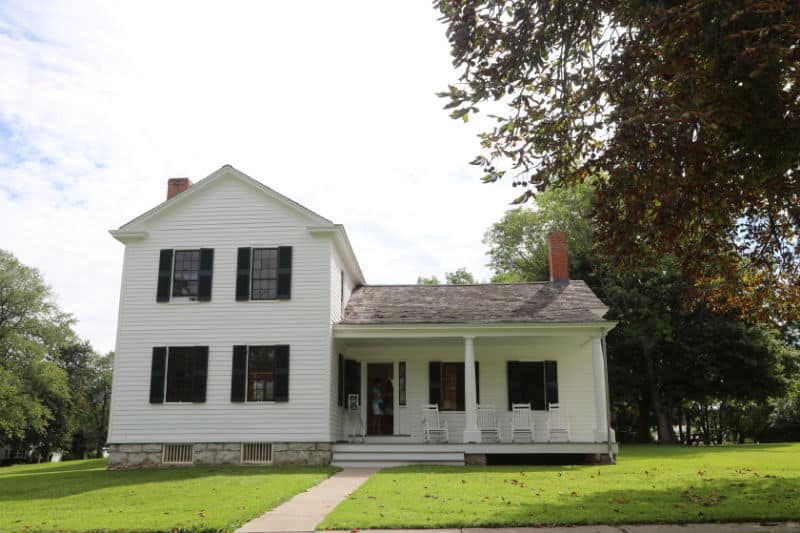 Best Things to do in Women's Rights National Historical Park

We suggest planning at minimum a half a day to visit the park. Between the visitor center and visiting each of the sites, you will want a few hours.

Make sure and plan time to explore the visitor center at the Women's Rights National Historical Park. The interpretive displays are truly amazing. They make you think while also doing a great job of explaining women's rights in history and today.

The Women's Rights NHP Junior Ranger program can be completed within the visitor center. It guides you to really understand the importance of the park.

Visit the location of the First Women’s Rights Convention in America held on July 19th and 20th in 1848!

300 people gathered in the chapel to attend the convention.

Declaration Park is located next to Wesleyan Chapel.

The home of Elizabeth Cady Stanton is a few minutes from the visitor center.

She was the main organizer of the Seneca Falls Woman's Rights Convention and the primary author of the Declaration of Sentiments.

Ranger-led tours are offered so visitors can see the inside of the house.

The First Women's Rights Convention and the Declaration of Sentiments were drafted in the home of Thomas and Mary Ann M'Clintock. 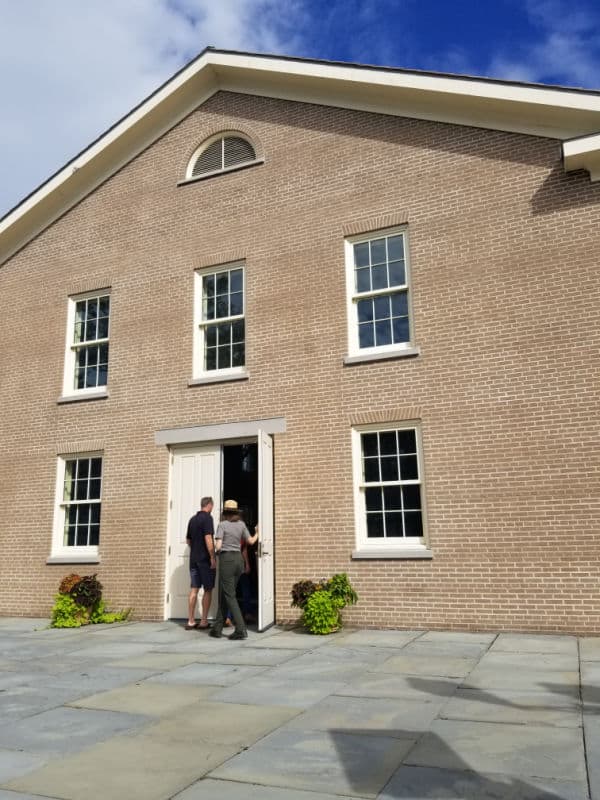 The walking tours leave from the Visitor Center and travel through the Historic District to the Elizabeth Cady Stanton House. The tours take an hour on average and you will walk two miles during this time.

This house is not yet open to the public.

The park is hosting Convention Days 2022: Abolitionist Roots of the Women's Rights Movement in July.

This annual event provides visitors the opportunity to engage in Women's history, learn more about the 1848 Seneca Falls Women's Rights Convention through speakers, art, and more. 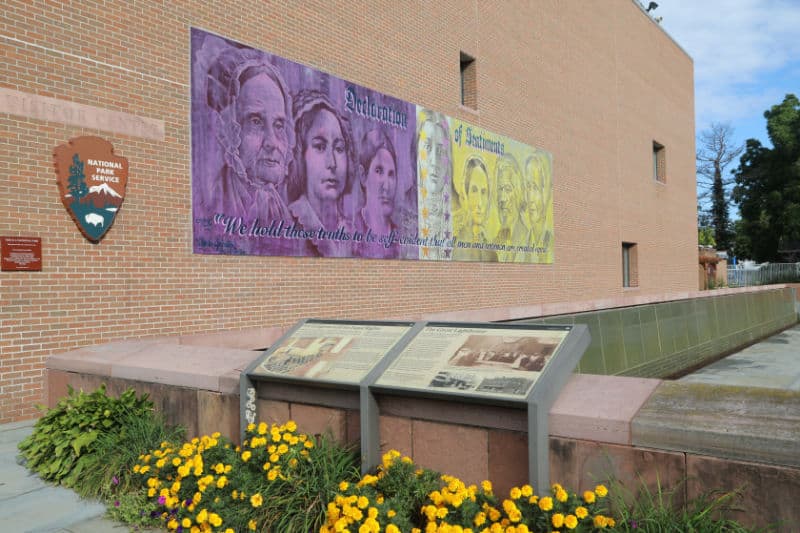 How to beat the crowds in Women's Rights National Historical Park?

We did not experience any crowds while visiting the park. We do suggest visiting mid-week if you want to skip the busiest times at most parks.

Where to stay when visiting Women's Rights National Historical Park

There are lodging and vacation rentals available in Seneca Falls and the surrounding Finger Lakes area.

The Gould Hotel is located just down the street from the park.

Geneva On The Lake - 3-star hotel by the lake. At Geneva On The Lake, you can look forward to a roundtrip airport shuttle, a terrace, and a garden. Active travelers can enjoy rowing/canoeing, sailing, and fishing at this hotel. Treat yourself to a massage or other spa services. The onsite fine-dining restaurant, Lancellotti's, features garden views. Enjoy the gym, as well as activities like boat tours, volleyball, and kayaking. Free in-room WiFi is available to all guests, along with dry cleaning/laundry services and a bar

Click on the map to see current rates for other hotels and vacation rentals in the area.

There are National Park Campground within the park.

This campground offers Lodging, RV and Tent Sites, Waterfront, a pool, and more.

This campground offers Lodging, RV and Tent Sites, a pool, waterfront, and more. 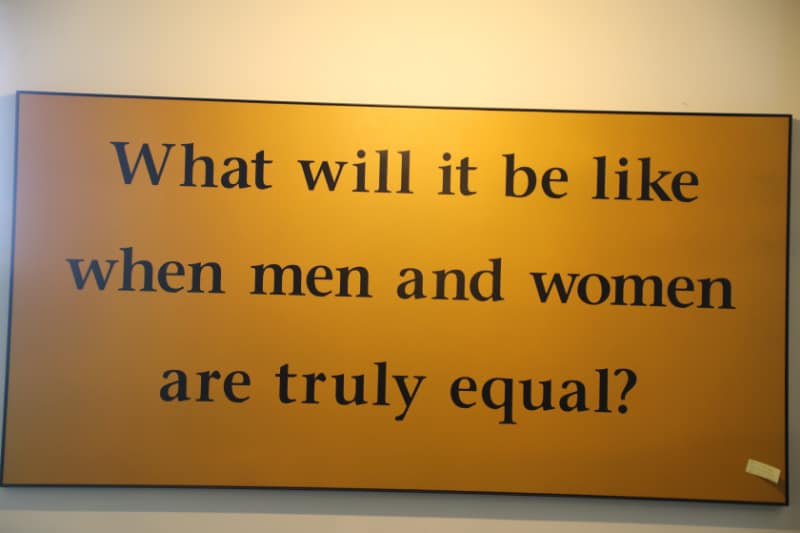 What Is the Women's Rights Movement? (What Was?)

The Agitators: Three Friends Who Fought for Abolition and Women's Rights

Extraordinary Women In History: 70 Remarkable Women Who Made a Difference, Inspired & Broke Barriers