Both Oakland and Magnolia Plantations are open for visitors to learn more about the cultural landscape of plantations in the United States. 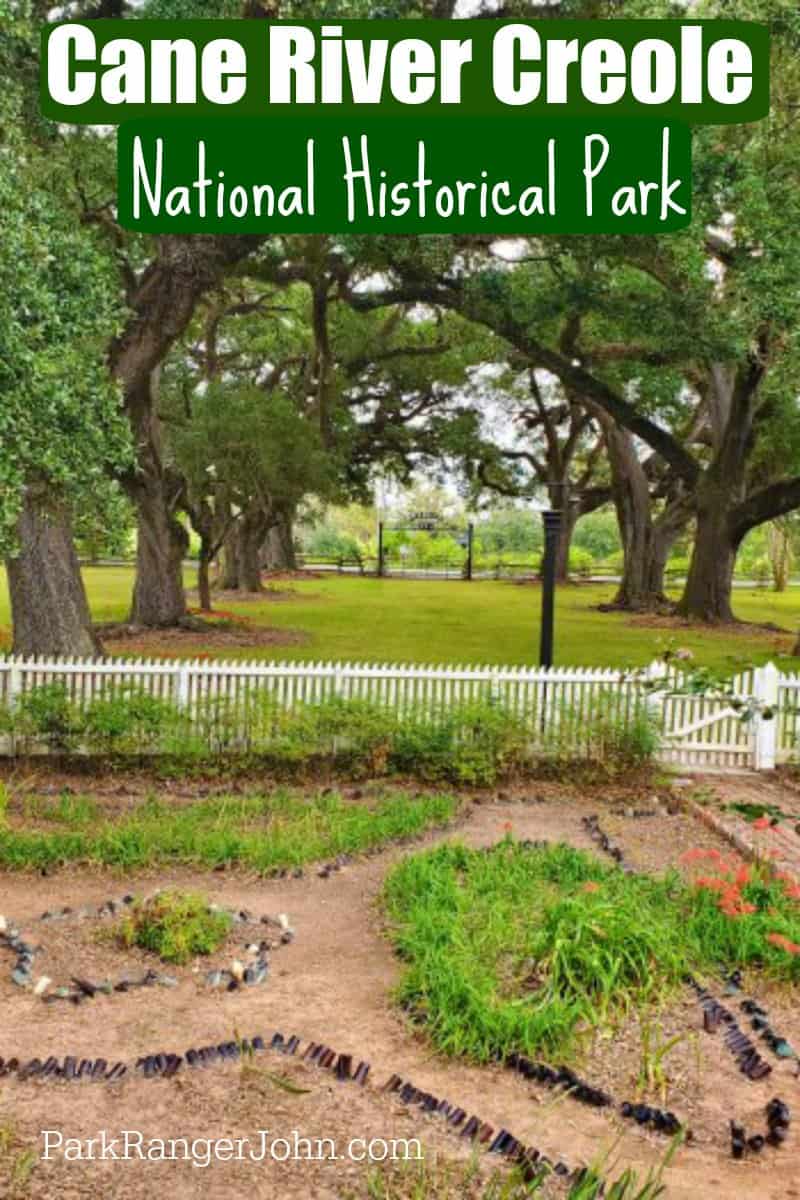 Cane River Creole NHP is split between two plantations that can easily be visited on the same day. They are about 15 minutes away from each other. 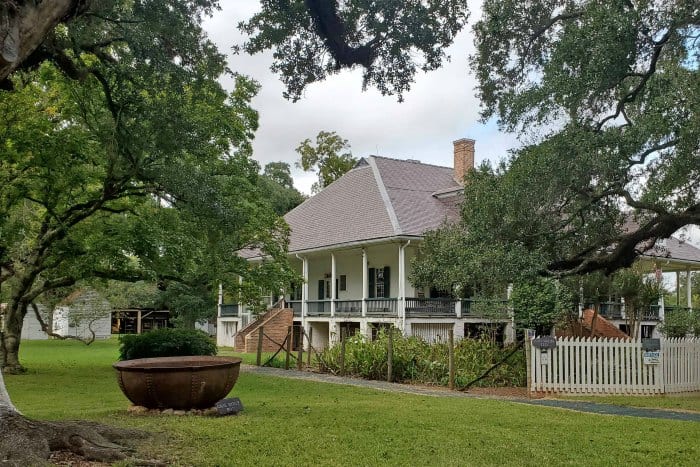 Oakland Plantation was founded by Jean Pierre Emanuel Prud’homme when he started farming the area and received a Spanish land grant in 1789.

The plantation was kept within the same family for over two centuries. Eight generations of the French Creole family lived and worked at the Oakland Plantation.

Enslaved African Americans lived and worked on the creole cotton plantations Oakland included. During a visit to the park, you can see the work of enslaved blacksmith Solomon Williams.

Mr. Williams's work can still be seen in the iron latches and hinges, numerous grave crosses within the slave cemetery, and well-drilling tools.

Oakland Plantation still has nearly 60 buildings that have been preserved. 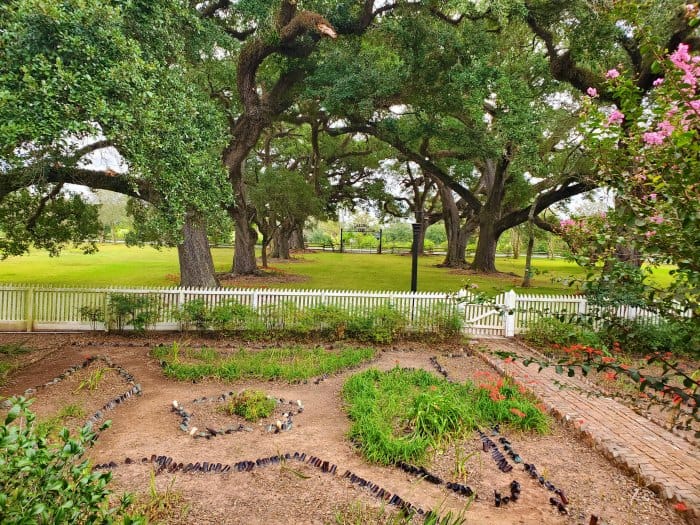 The bottle garden at the front of the main house is filled with 2500 bottles. These bottles include wine, whiskey, champagne, beer, and medicine bottles.

The green torpedo bottles were filled with bitters from Ireland. Everything used at the house was re-used as much as possible.

You can see the white picket fence that was built in 1959. The fence appeared in the movie The Horse Soldiers from 1959 with John Wayne and William Holden. The movie shows the cavalry approaching the main house. The fence was built to keep the horses away from the bottle garden. 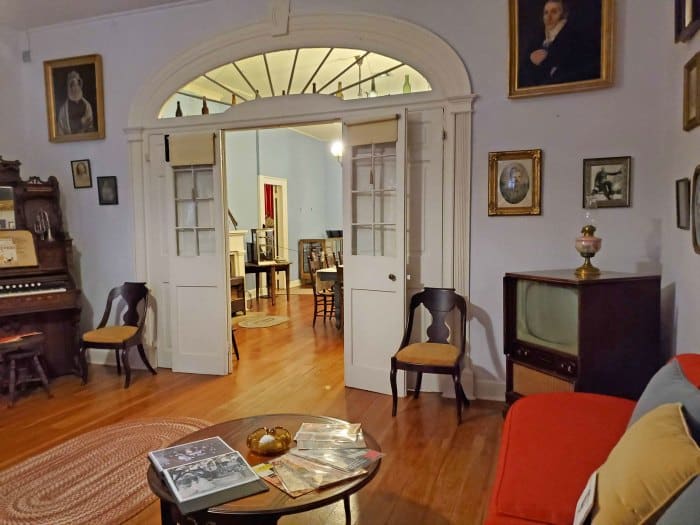 The Oakland Plantation main house is filled with house items from many generations. The house was built between 1818 and 1821.

In 1821 there were 4 rooms built with no nails. The wood was grooved together and then cypress pegs were used.

The painted bricks were made in 1821 with soil and clay with Spanish moss and animal hair. The bricks were cured by the sun.

The live oak tree outside the house was planted in 1826.

One cool fact is the windows raise up and you can walk through them. This was done to get around the door tax that was in place.

There are no closets in the house because of a closet tax so the family used armoires.

The portraits in the parlor are original from the 1800s original Prudhoe family.

The final descendants of the family moved out of the main house in 1988.

We learned that the master bedroom bed was built in New Orleans and had to be brought to the house via a steamboat. 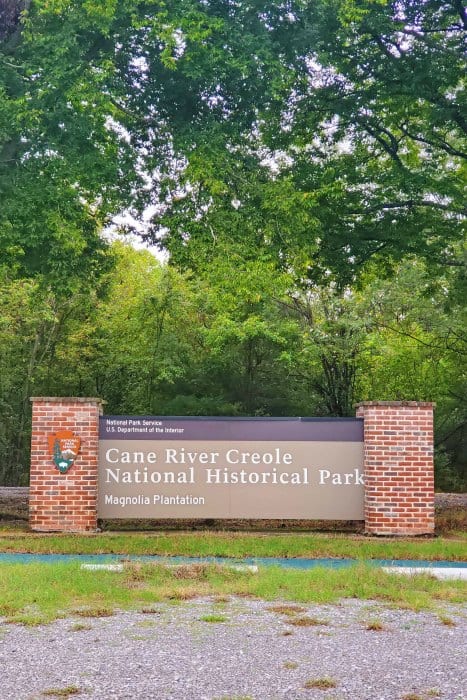 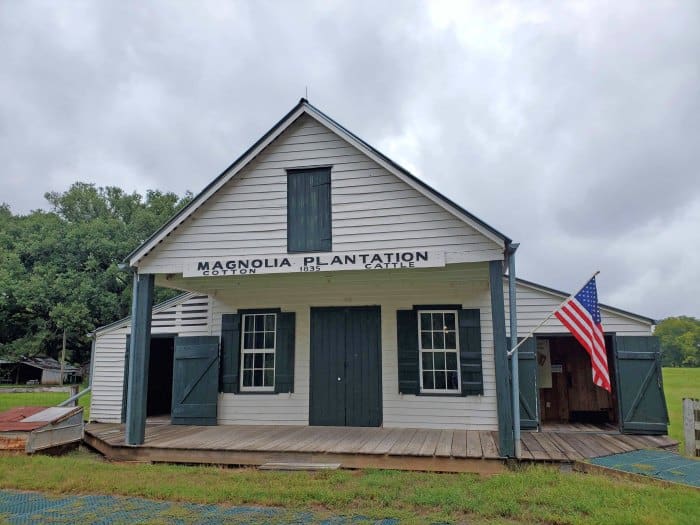 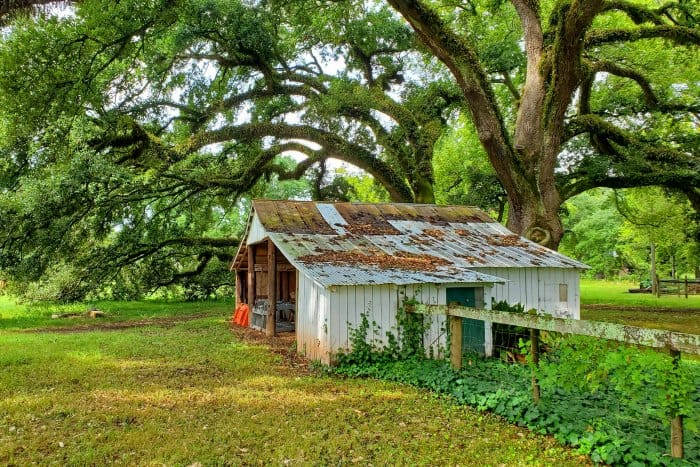 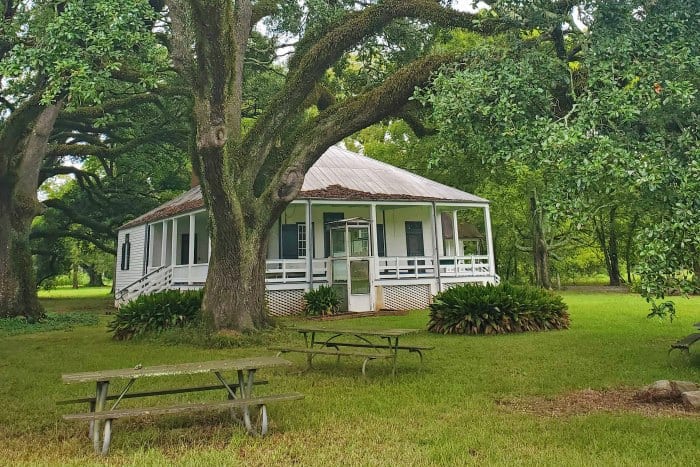 Jean Baptiste LeCompte received a land grant in 1753 and established the foundation for a large cotton plantation. This started the path to the land becoming the Magnolia Plantation.

Magnolia Plantation was established in 1835 by Ambrose LeCompte II and his wife Julia Buard LeCompte.

The LeCompte family acquired multiple properties totaling over 6,000 acres by 1860. They had 275 enslaved persons who processed the cotton and other crops produced on the land.

The enslaved workers lived in 70 cabins on the property. Eight of these cabins still stand on the grounds of Magnolia Plantation.

The plantation went through the Civil War which was incredibly hard on the Lecompte-Hertzog family with many family members killed.

After the war, the plantation changed as the enslaved workers became sharecroppers, tenants, and day laborers.

Currently, there are twenty buildings still standing at the Magnolia Plantation. The main house is privately owned and not open to visitors. The store, overseer's house/hospital, blacksmith shop, tenant cabin, and gin barn are open to visitors. 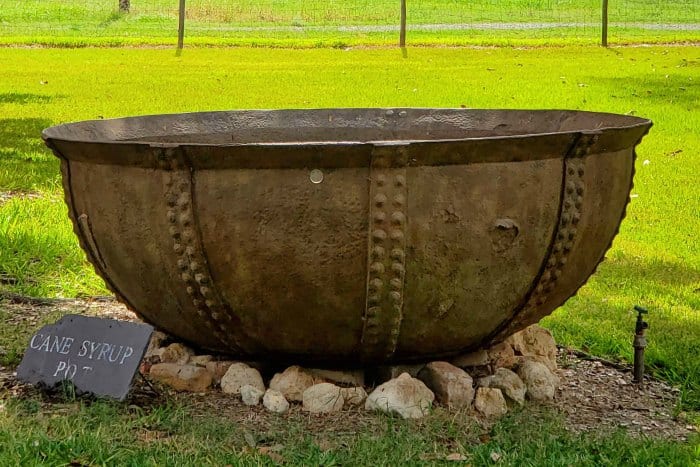 Top things to do at Cane River Creole NHP

The park offers a couple of different tours of the Oakland Plantation. Size is limited on each tour so make sure you arrive in time to get your name on the list.

We took a guided tour of Oakland Plantation's Main House and it was really interesting. While the tour says it is 45 minutes our tour took closer to an hour. The volunteer who guided the tour was very happy to share ALL thing things they knew about the house.

There are no chairs or places to sit during the walking tour. Please be prepared to stand for the entire tour. Photos were allowed during the tour. 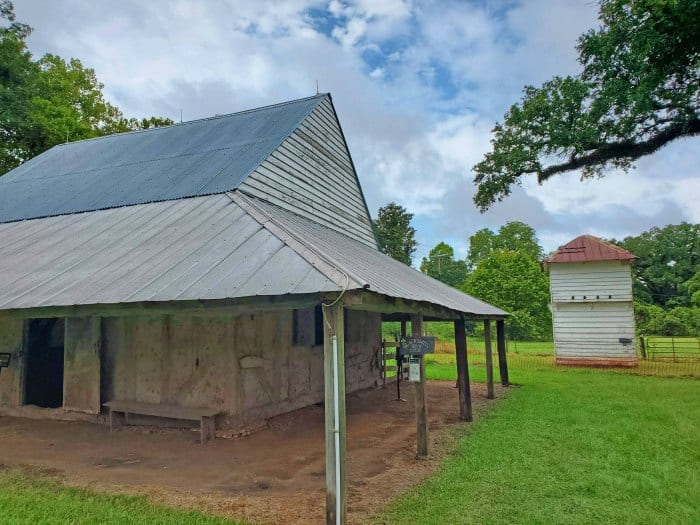 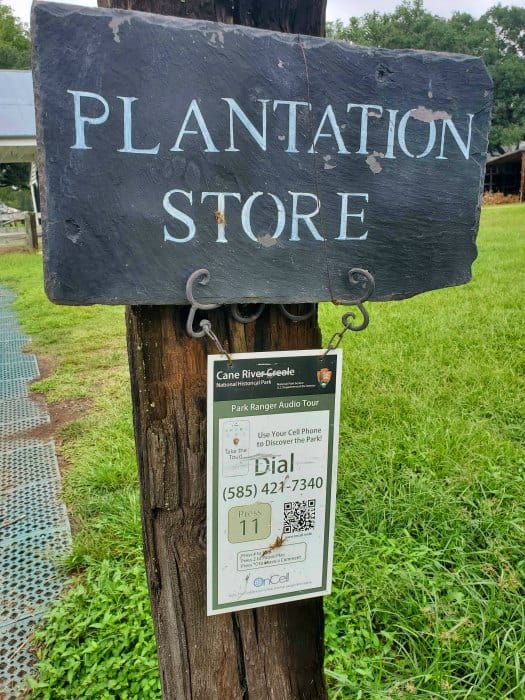 The park offers cell phone tours at both the Magnolia Plantation and Oakland Plantation. 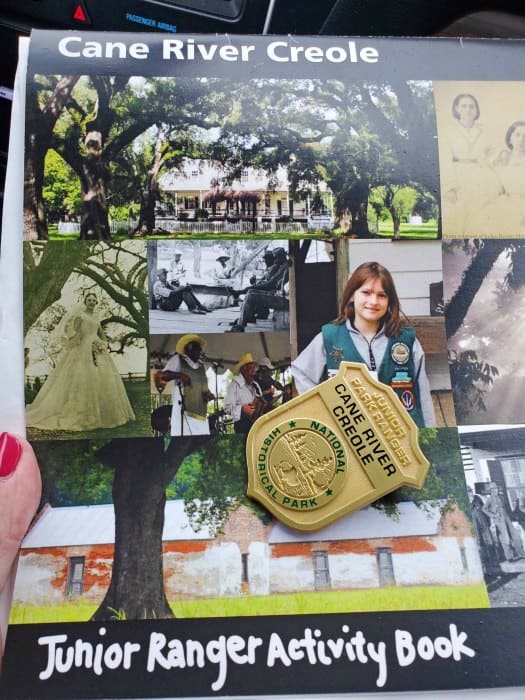 The Cane River Creole NHP Junior Ranger Program is a great way to learn more about the park. When visiting the park you can pick up the Junior Ranger booklet at the Oakland Plantation Store. 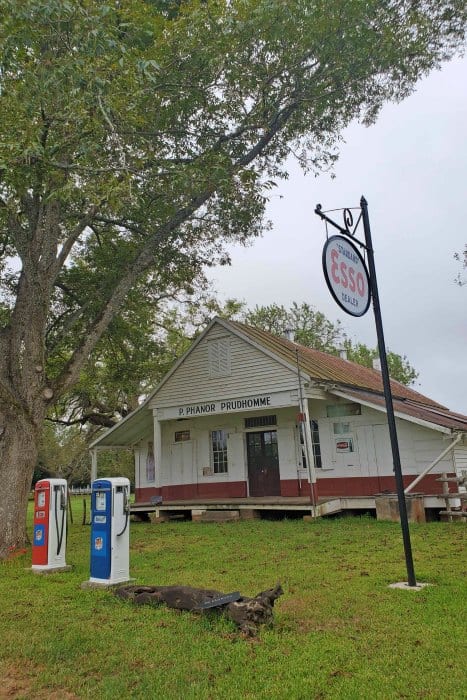 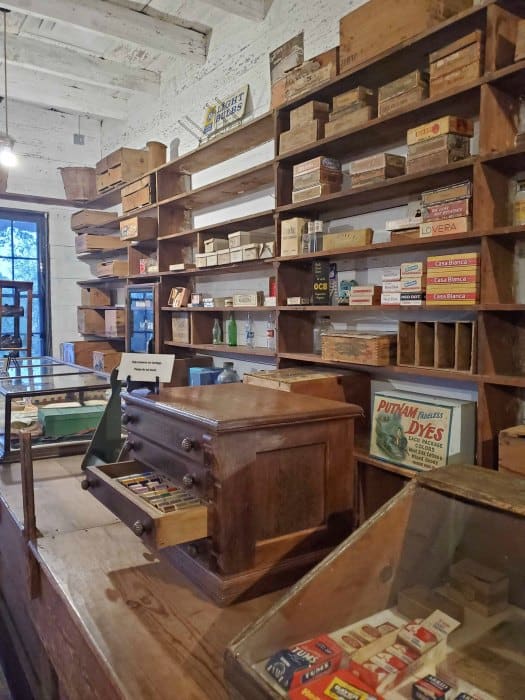 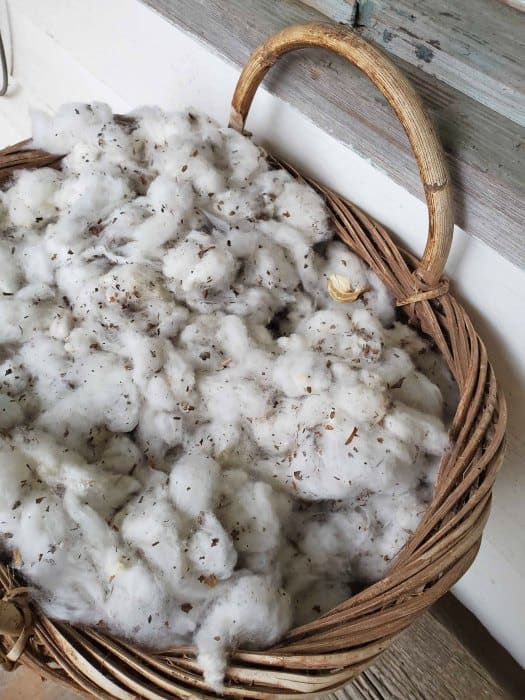 The park sits within the  Cane River National Heritage Area. The NHA is situated along the Cane River Lake in Natchitoches, Louisiana.  This area within the Natchitoches Parish is known for being the intersection of French and Spanish settlements.

Directions to Oakland Plantation - take I-49 to Exit 127, Flora/Cypress. Head east on LA Highway 120 toward Cypress. Cross over LA Highway 1 onto LA Highway 494. The parking lot and entrance pavilion for Oakland is 4.5 miles east of Highway 1 on the left.

Visitor Center - The park does not have a designated park visitor center. The Oakland Plantation Store is the main park visitor contact center.

You can pick up your Junior Ranger program, get a park stamp, and find out more information about the park here.

Please note that program schedules are subject to change. For updates visit the parks Facebook page or call 318-352-0383, ext. 316. 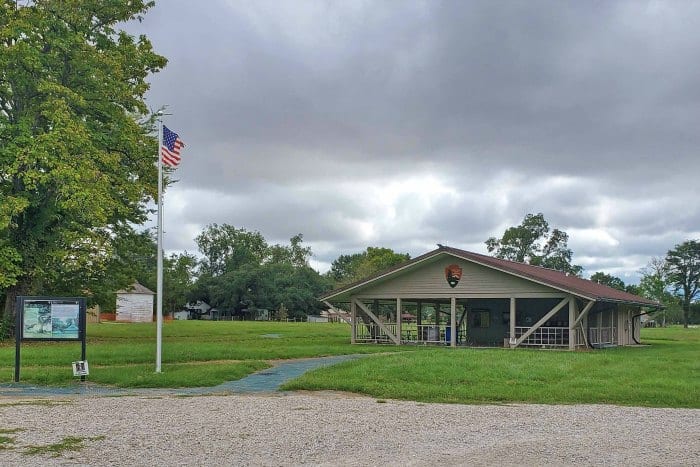