The park was the first US National Seashore established in 1953 to preserve and protect parts of three unspoiled barrier islands. 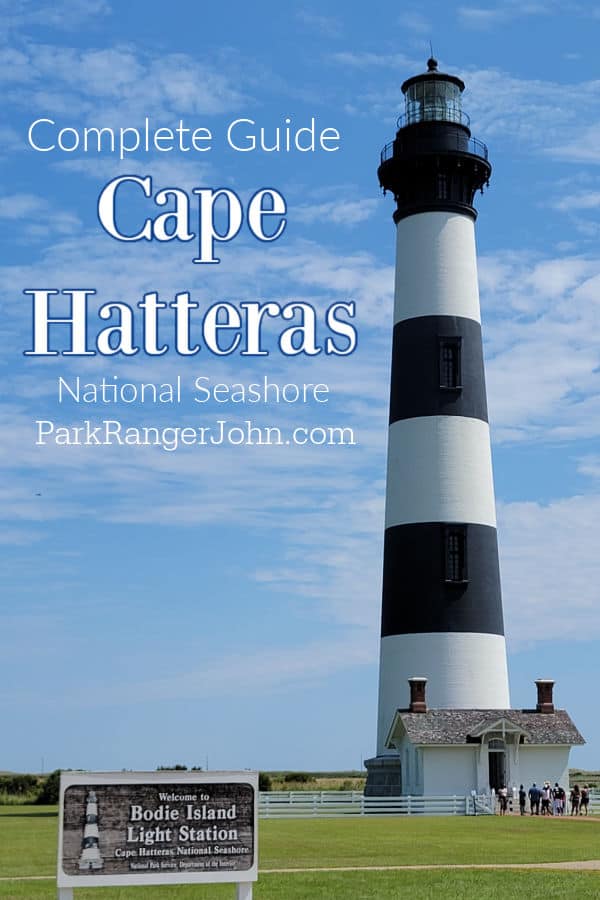 The three islands of Bodie, Hatteras and Ocracoke form part of a chain of barrier islands that run from New York to Mexico along the Atlantic Ocean.

Pamlico Sound is 80 miles long and 15-20 miles wide saltwater lagoon. The sound creates miles of open water between the Outer Banks barrier islands and the mainland of the United States. 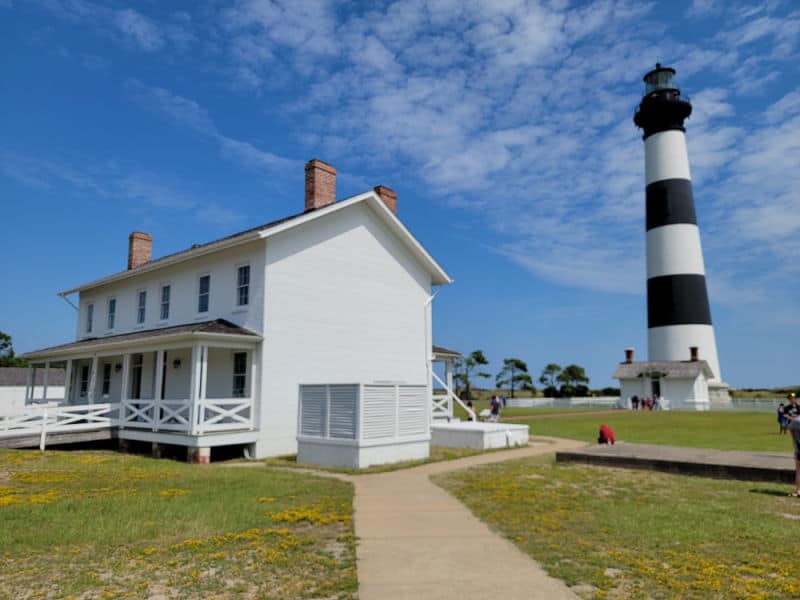 Cape Hatteras is the southern point that forms the "elbow" of the Outer Banks in North Carolina.

The Cape Hatteras Lighthouse on Hatteras Island was commissioned in 1794 and has been rebuilt several times.

The present-day lighthouse was built in 1870 and moved to its current location in 1999. The Cape Hatteras Lighthouse is closed to climbing and is undergoing an extensive restoration project.

Ocracoke Island is only accessible by water or air. There are no roads that lead to the island.

There are three ferry options to the island including both passenger and vehicle ferries.

The Bodie Island Lighthouse was first built in 1847 to guide ships through the rough Outer Banks waters which were known as the Graveyard of the Atlantic.

The Bodie Island Lighthouse is open for climbing 7 days a week. 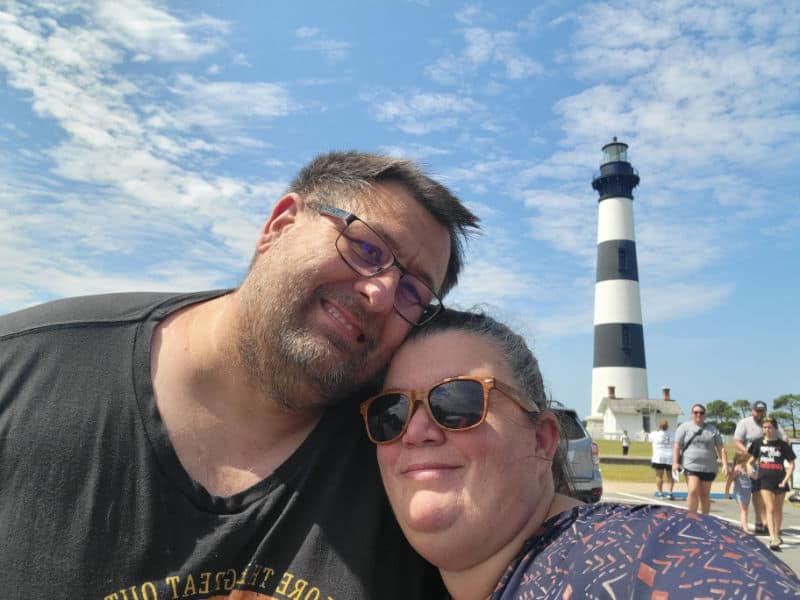 What is there not to love in the Outer Banks?

I mean seriously you have Cape Hatteras and Cape lookout, wild horses, several lighthouses, miles of beach to explore, epic sunrises and sunsets, and a plethora of beach activities to enjoy!

Just don't forget your supplies to make a sandcastle and get out to the beach! 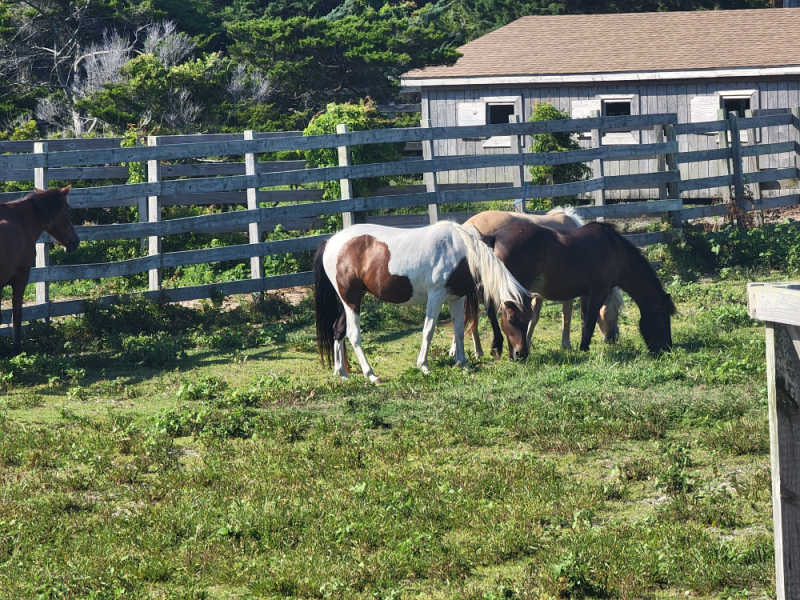 Cape Hatteras NS was the first National Seashore authorized by Congress in 1937.

The park was formally dedicated in 1958.

The Cape Hatteras Lighthouse was built in 1870 as a successor to an earlier smaller lighthouse.

The lighthouse warns ships away from Diamond Shoals. It is the tallest lighthouse in the United States and one of the most recognizable. 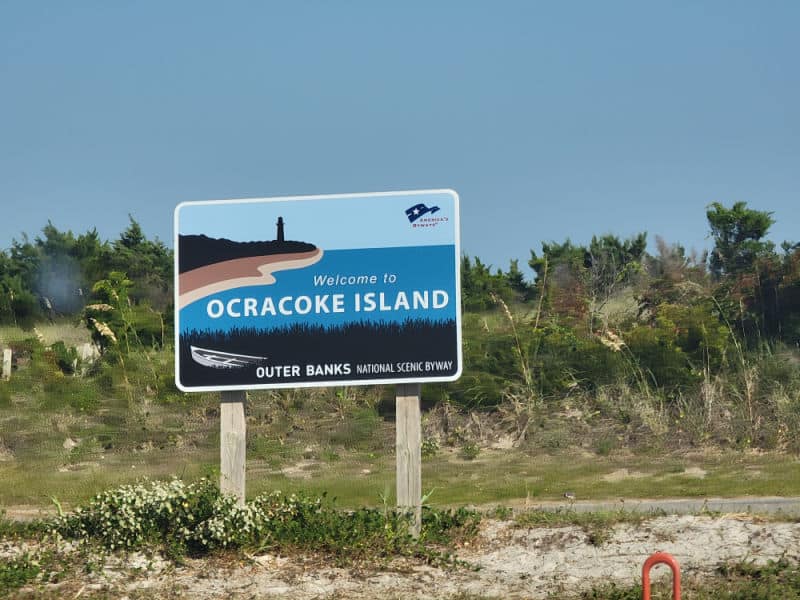 Things to know before your visit to Cape Hatteras National Seashore

Pets must be on a leash less than 6 feet long at all times.

Pets are not allowed in any buildings.

Cell service is generally good. We had consistent service during our visit to the park.

The grounds are open 24/7 but there may be seasonal closures for different sections of the beach.

We treat our clothes with permethrin insect repellent before we head to the park.

There are no restaurants within the park but there are a ton near the park.

We suggest picking up snacks and food before heading to the beach or spending the day exploring the park.

Drones are not allowed on any lands or waters administered by the National Park Service.

Cape Hatteras is part of the 2019 Passport Stamp Set as the Southeast Regional Stamp.

It was also featured in the 1988 Passport Stamp Set.

There is also a Cape Hatteras Passport Sticker

DC Fast charger is located at the Avon Pier parking lot in Avon.

Level 2 is located at Hatteras Landing in Hatteras Village. 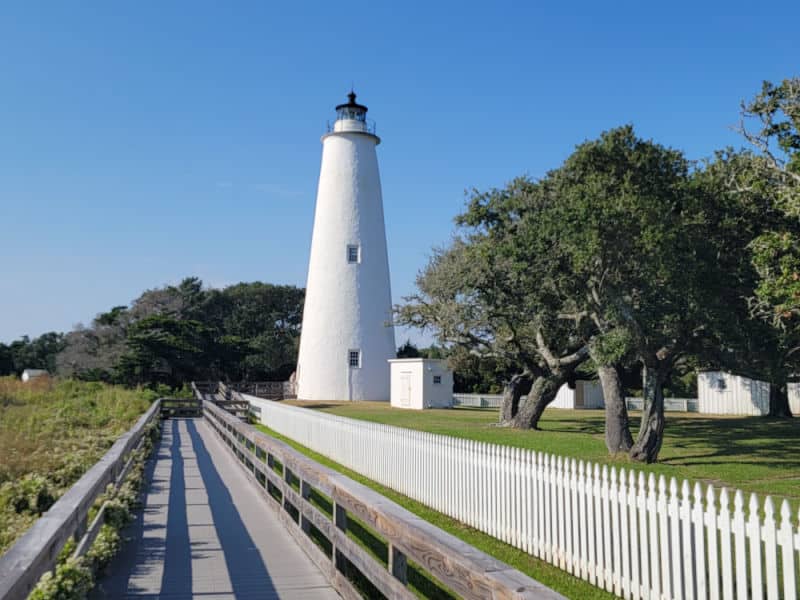 Check out how the park compares to the 63 National Parks by Size. 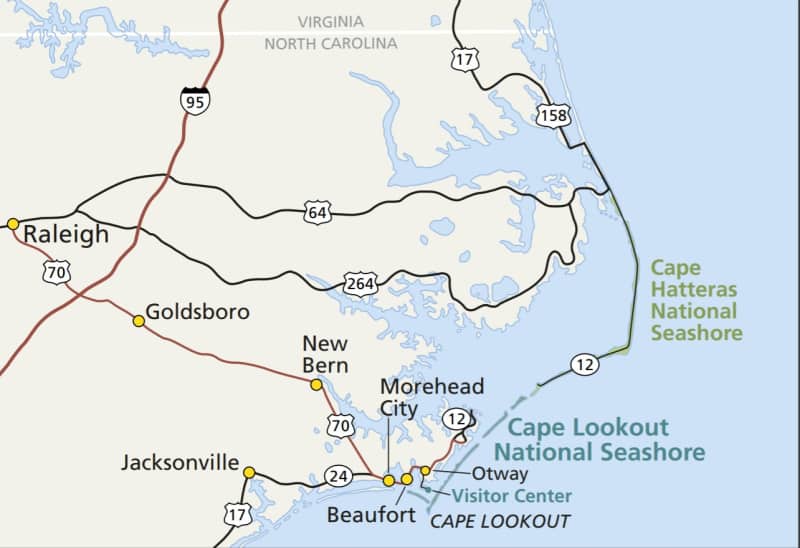 Where is Cape Hatteras National Seashore? 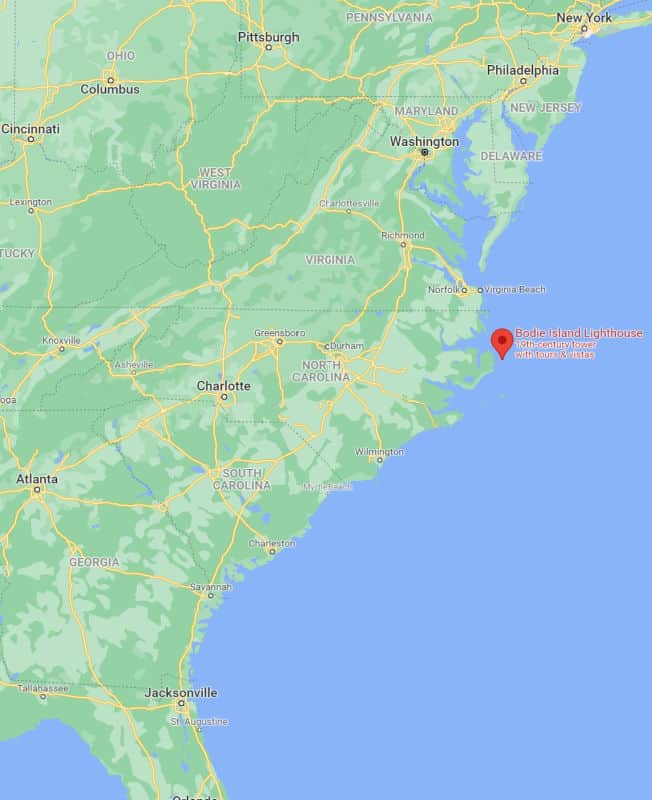 The northern entrance of Cape Hatteras National Seashore is located at the junction of US-64 and NC-12 in Nags Head, NC.

The southern entrance is located on NC-12 just north of Ocracoke Village, NC (accessible by ferry only). 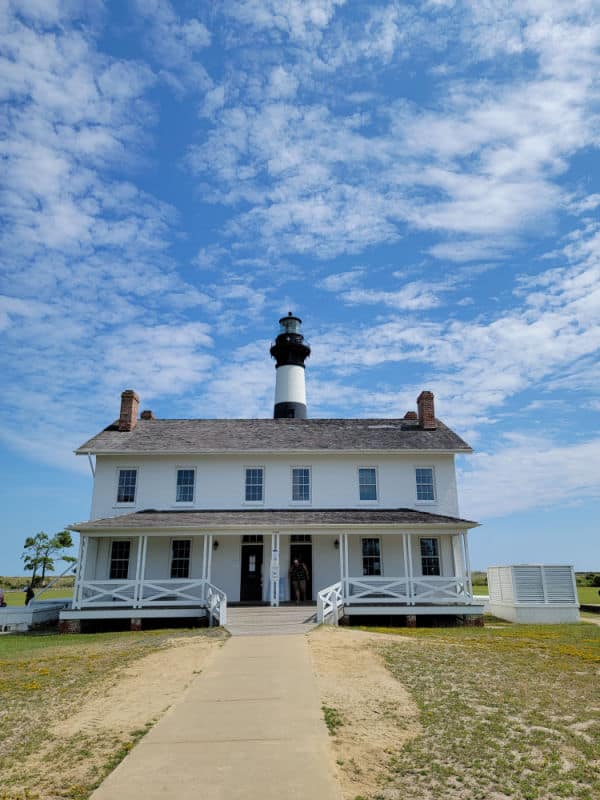 Location - Near the Cape Hatteras Lighthouse

Museum of the Sea

Location - 50 miles south of the north entrance in Buxton, NC

Location - within the village of Ocracoke 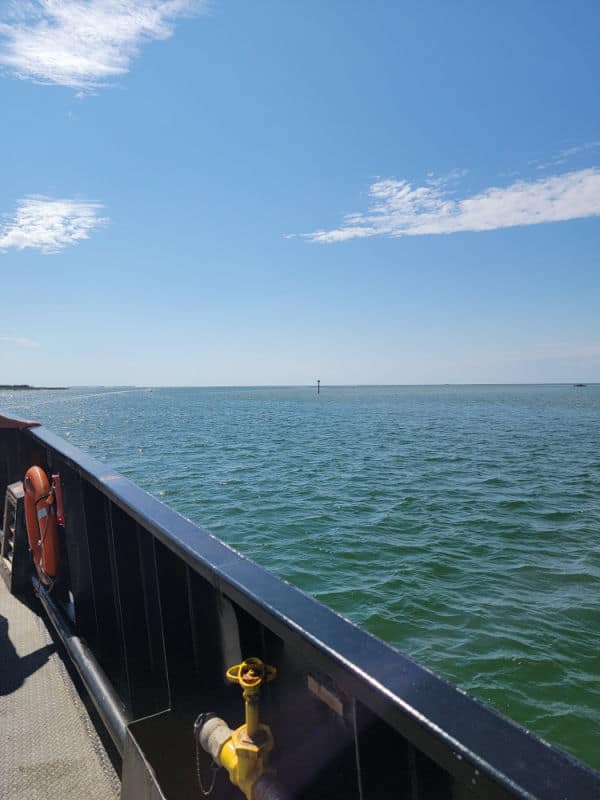 Getting to Cape Hatteras National Seashore

Norfolk International Airport (ORF) is located about 151 miles to the north of Cape Hatteras National Seashore in Norfolk, VA.

Raleigh-Durham International Airport (RDU) is located about 260 miles from the seashore.

Cape Hatteras NS is located along NC-12 in the Outer Banks of North Carolina.

From the north by following US 158 to Nag Heads, NC, and the turn-off to NC-12 and Cape Hatteras NS.

From the south, you can take NCDOT ferries from Swanquarter, NC and Cedar Island, NC to the village of Ocracoke on Ocracoke Island.

The provided physical address is the location of the Cape Hatteras Lighthouse, roughly in the middle of the park. 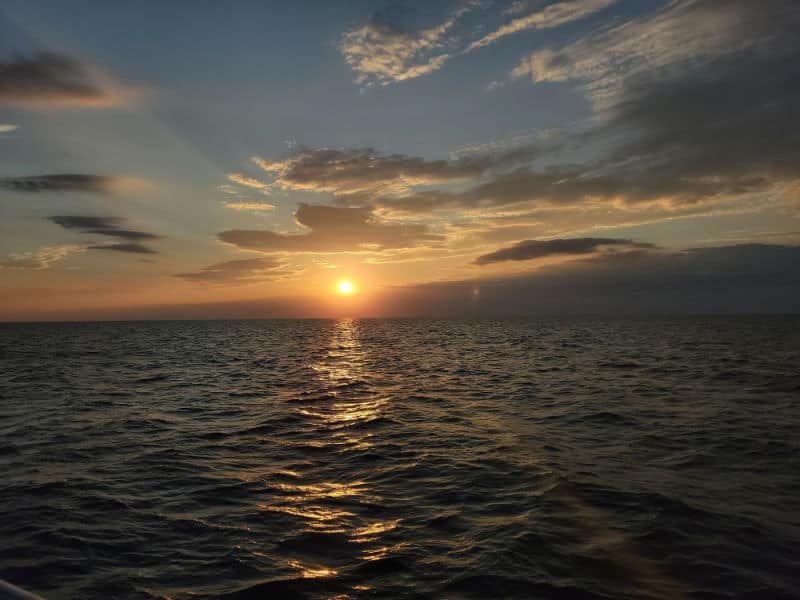 The best time to visit the Outer Banks is between the months of March-May and September-November.

You will find far fewer visitors and lodging rates drop reflecting this change. Keep in mind that during late spring and early fall, the National Park Service blocks certain areas to protect threatened and endangered species.

Hurricane season in the Outer Banks runs between June 1 through November 30th. This is just a guide but when the highest probability to occur.

Did you know that the Outer Banks experience the most meteotsunamis along the east coast?

Better yet, what is a meteotsunamis?

They are typically about 1-foot waves that are barely noticeable, up to 2 feet or more waves that are much stronger can occur that can have impacts on land and lead to human injuries. unlike tsunamis that are generated by earthquakes, meteotsunamis are created by sudden air temperature drops like severe thunderstorms, squall lines, nor'easters, and tropical cyclones. 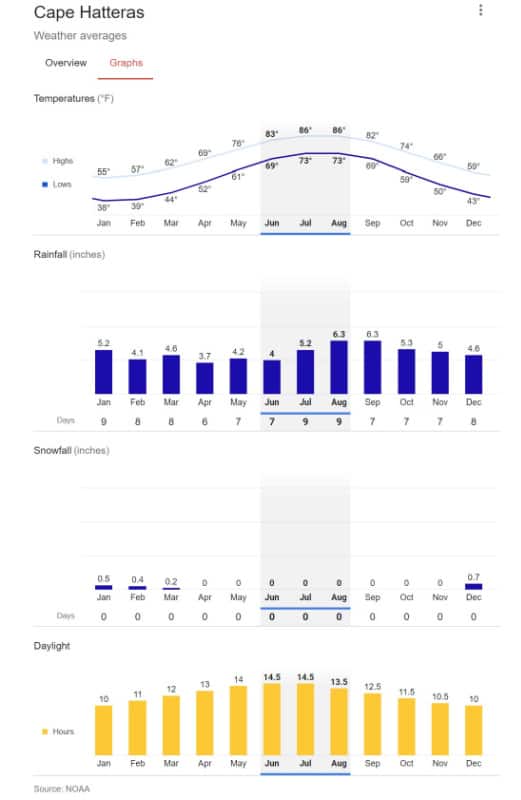 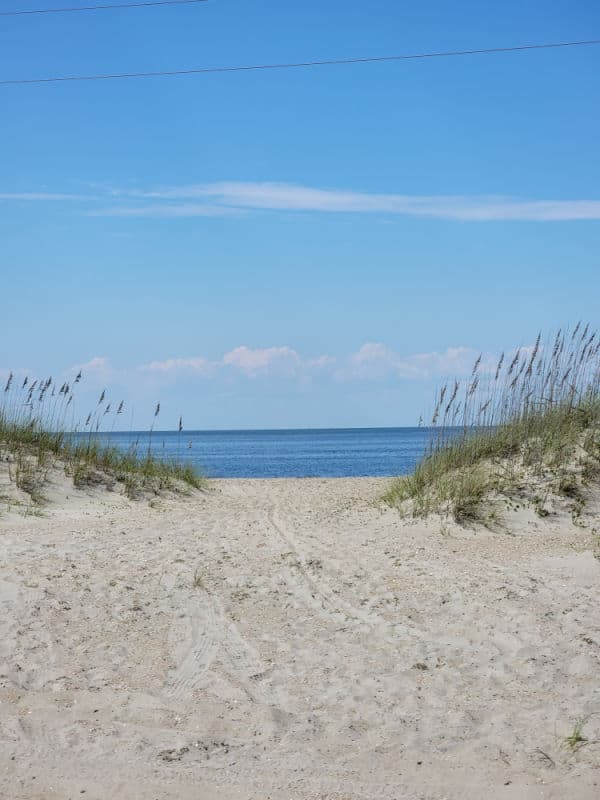 Best Things to do in Cape Hatteras National Seashore

There are so many epic things to do in Cape Hatteras NS!

You can spend your time relaxing on the beach, exploring historic lighthouses, birdwatching, fishing, surfing, shelling, or doing absolutely nothing but watching the waves.

You can view the Ocracoke Ponies from the Pony Pen and Parking Lot on Ocracoke Island.

You can enjoy nearly 70 miles of the beach while visiting the park.

If you plan to go swimming make sure you are aware of rip currents.

There are four beaches along the national seashore that are staffed with lifeguards during the summer.

Fires are allowed on the beach from 6 am to 10 pm.

From November 16 to April 30, beach fires are allowed through the park.

From May 1 to November 15, beach fires are only allowed on the ocean beaches at Coquina Beach, Ocracoke Day Use Area and the villages of Rodanthe, Waves, Salvo, Avon, Buxton, Frisco, and Hatteras to protect nesting sea turtles.

In order to have a beach fire, you do need a free beach fire permit from the National Park Service. They are available here. 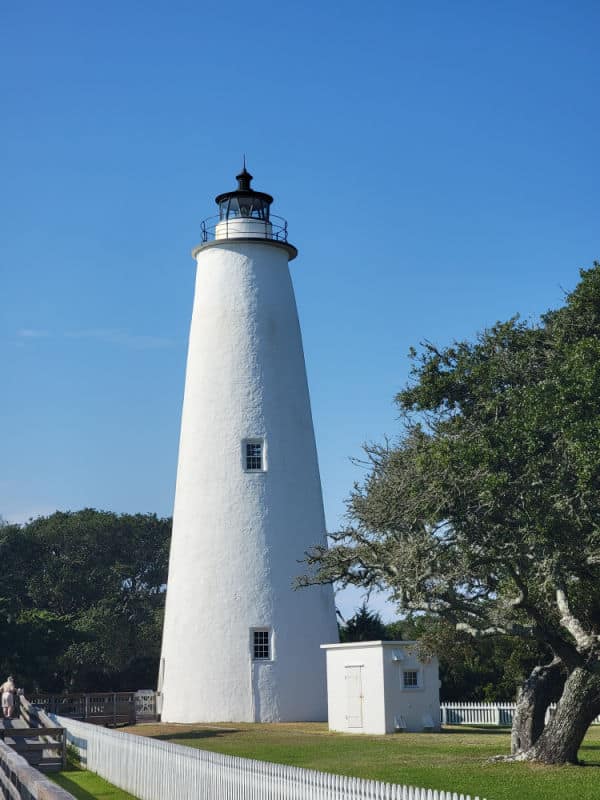 Visitors need to make a reservation tour time in order to climb the lighthouse.

There are over 200 steps from the ground to the top. There is no air conditioning or elevator to the top.

The Bodie Island Lighthouse is open to climbing 7 days a week beginning the third Friday in April through Columbus Day.

Tickets are $10 for adults and $5 for senior citizens along with kids 11 and under.

Tickets are available on a first-come, first-served basis and can only be purchased from www.recreation.gov. Tickets go on sale at 7 am for that day's climbs only.

The park offers full moon tours of the lighthouse.

Currently not open due to ongoing restoration work.

The base is open periodically for viewing but it is not open to be climbed,

Cape Hatteras is a great place for wildlife and bird watching. Over 400 species of birds have been spotted in or around the seashore.

A stop at the Bodie Island Marsh Blind provides a great place for wildlife viewing. The blind is open from April 1 through the middle of November most years.

There are five species of sea turtles found along the Cape Hatteras NS - the leatherback, hawksbill (rarely seen), Kemp's Ridley, loggerhead and green.

The Kemp's Ridley, leatherback and hawksbill are listed as Endangered, the loggerhead is Threatened, and the green is Threatened.

Junior Ranger programs can be picked up at the visitor centers. The program is a great way for visitors of all ages to learn more about the park.

There are ramps along the seashore that provide access to the ocean beaches.

Use of ORVs within Cape Hatteras NS requires a permit.

If you plan to go off-roading make sure to check current access ORV Routes on the NPS website.

Every vehicle heading out to the beach is required to carry a low-pressure tire gauge, a shovel, a jack, and a jack support board.

The best fishing is in the spring and fall but you can fish year-round.

Any visitor over the age of 16 has to have a Coastal Recreational Fishing License.

There are three signed nature trails within the National Seashore. 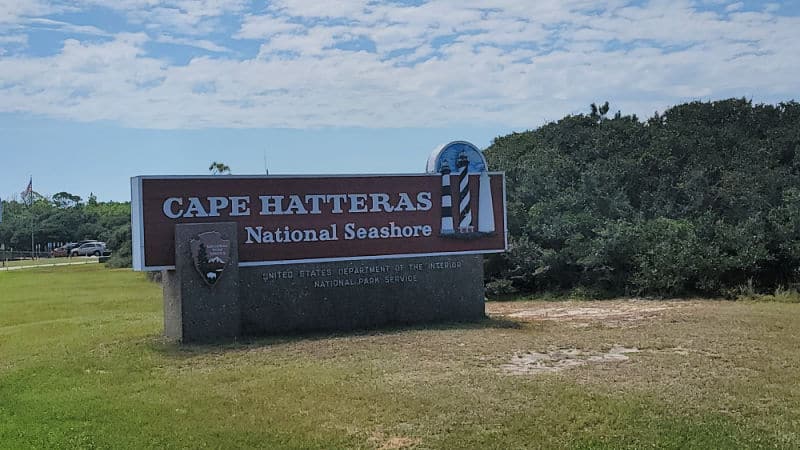 How to beat the crowds in Cape Hatteras National Seashore?

Try arriving during the week or on Friday or Sunday instead of Saturday.

Saturday traffic can be a beast taking up way too much time from your beach vacation.

If possible visit during the off-season or shoulder season instead of the busy summer season.

Where to stay when visiting Cape Hatteras National Seashore

Check out the amazing vacation rentals near Cape Hatteras!

Click on the map below to find current hotel and vacation rental rates for your stay! 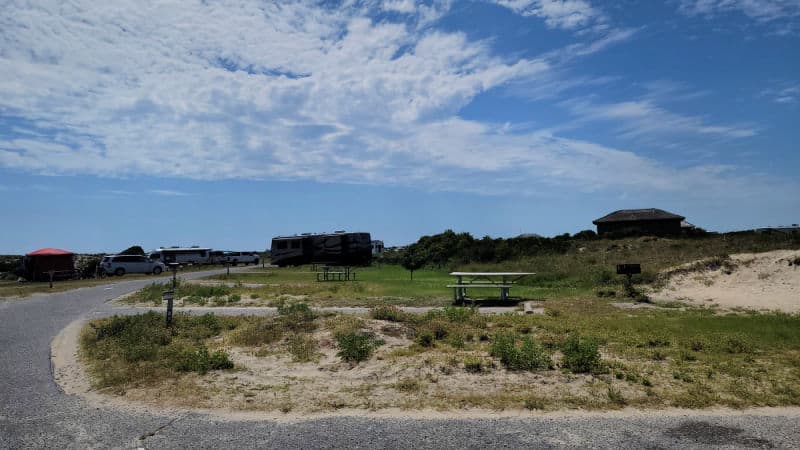 There are four designated campgrounds within Cape Hatteras NS.

You will want to make a reservation as soon as you know you are heading to the Outer Banks. These campgrounds are POPULAR!!!!

Things to know when planning a camping trip to Cape Hatteras

Dump stations are located at the Oregon Inlet, Cape Point, and Ocracoke Campgrounds.

Holders of the National Parks and Federal Recreational Lands Senior or Access Pass, or the Golden Age or Access pass are eligible for a 50% discount on their campsite.

No more than two vehicles (a pop-up camper is considered a vehicle) and six persons may occupy a single site.

Mosquitoes may be a problem, so netting and insect repellent are recommended.

Frisco Campground is located among sand dunes. You will want to be prepared for sand! 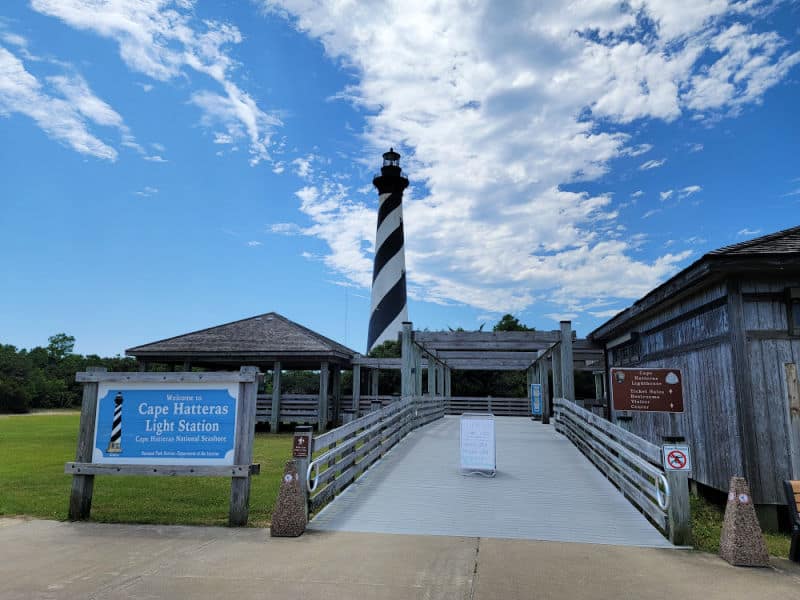