Fort Monroe National Monument is also known as the Freedom Fortress. This great national monument is located in Hampton, Virginia. 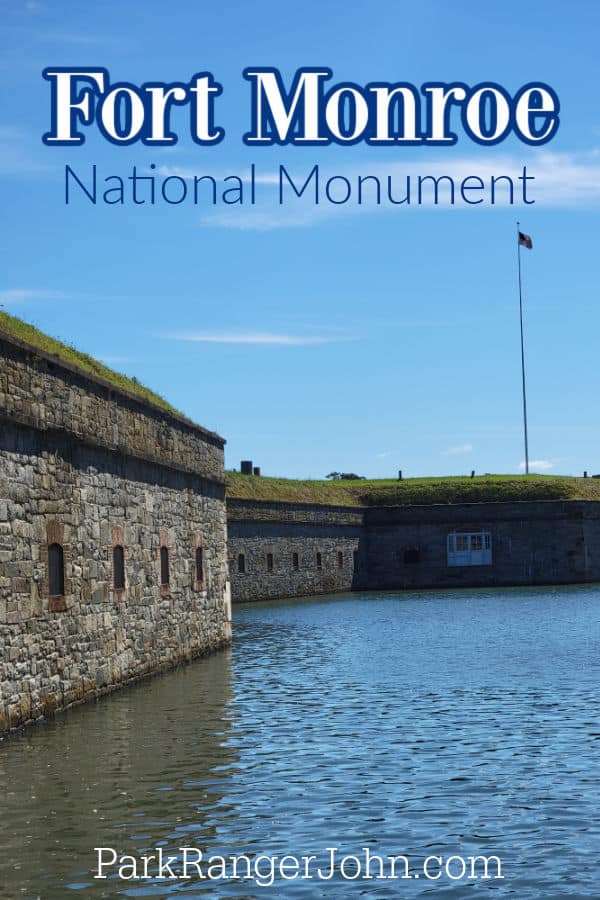 Fort Monroe's history spans from the 17th to the 21st century, from American Indians to Captain John Smith, to American Civil War history. The Fort was known first as "The Gibraltar of the Chesapeake" and later as "Freedom's Fortress,"

Originally named "Pointe Comfort" by Captain John Smith in 1607 when the first English colonists came to America. It was here that the settlers of Jamestown established Fort Algernon in 1609.

Fort Monroe is the largest four-star bastion fort and the largest of the Third System of fortifications ever built in the United States. The fort was named after US President James Monroe.

It was developed as a coastal defense strategy to protect the Chesapeake Bay. The fort took 15 years to complete between 1815 and 1836. 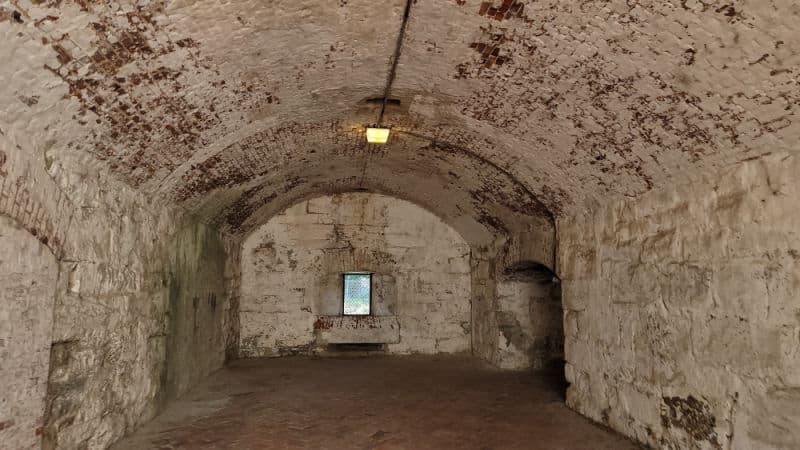 The fort construction was built under the supervision of Robert E. Lee who was at the time a U.S. Army Lieutenant who later commanded the Confederate forces in the Civil War.

Fort Monroe was the site of the first landing of enslaved Africans in 1619. They had been captured by the White Lion ship. The ship traded the 20 Africans for provisions and supplies so they could make their trip back to England.

This marked the beginning of African enslavement in the Virginia Colony.

In May 1861, Major General Benjamin Butler made the famous "Fort Monroe Doctrine," determining that escaping slaves who reached Union lines would be considered contraband and not be returned to bondage.

Slavery was also called bondage during this time. Even though Virginia had seceded from the Union in 1861, Fort Monroe stayed in Union hands for the entirety of the Civil War and served as a haven for slaves escaping to freedom.

This started when three enslaved men, Frank Baker, Shepard Mallory, and James Townsend fled Confederate-held territory at Sewell's Point and rowed across Hampton Roads not knowing their future when they reached the fort.

They risked their lives in hopes of finding freedom. More than 500,000 enslaved people sought protection at the fort. 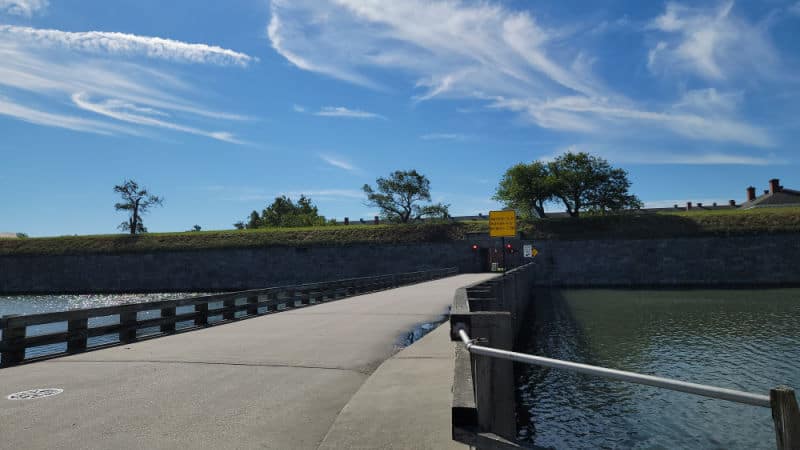 The fort served as the U.S. Army's Coastal Defense Artillery School during the 19th and 20th centuries, and most recently, as headquarters of the U.S. Army's Training and Doctrine Command.

Fort Monroe was decommissioned in 2011 and became a National Monument. The park is only 10 years old and still working on developing a full park plan. 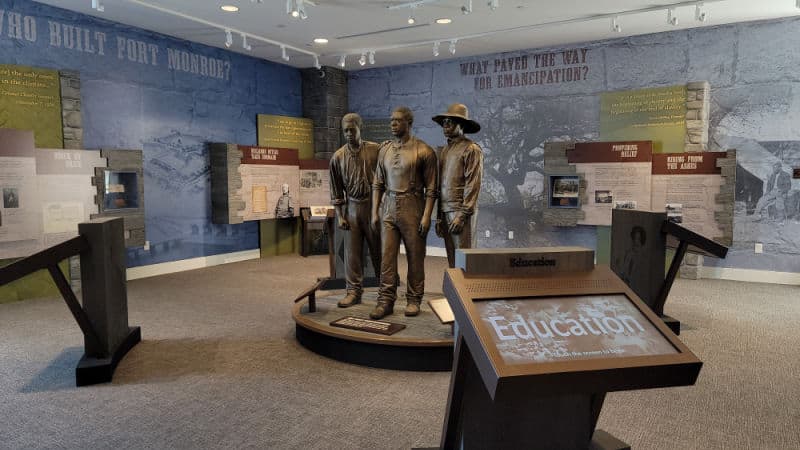 The visitor and education center is not on the fort grounds it is across a small bridge near the water. You can park near the Casemate Museum and easily walk over to the museum. It is a great walk through the fort walls.

The visitor center has exhibits, a small park store, and information on the fort.

There are great signs all over the park detailing the walking tour. 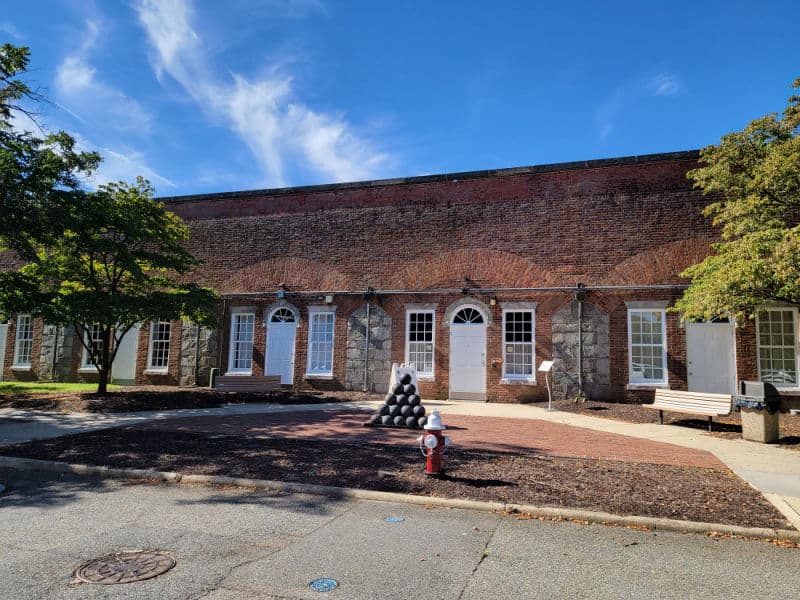 This partner-operated museum presents the complex history of Old Point Comfort and Fort Monroe across more than four centuries.

Access to the museum is by time reservation entry through the visitor center. One can also call 757-690-8181 or visit: https://bit.ly/3icOzD4 to make a reservation online.

The Casemate Museum is operated by the Commonwealth of Virginia through the Fort Monroe Authority.

Admission is free and the facility is wheelchair accessible. 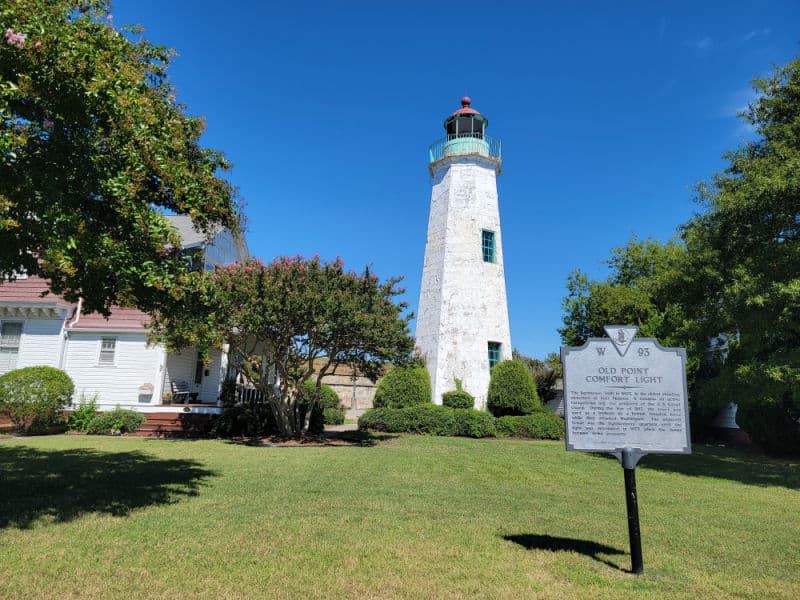 The Old Comfort Point Lighthouse stands 58 feet tall and is made of sandstone masonry. The lighthouse has an octagonal shape. The original lighthouse was built in 1774 and then reconstructed in 1803.

The lighthouse is maintained by the US Coastguard.

Major General Benjamin Butler occupied these quarters in 1861 where he made the pivotal "Contraband decision."

These quarters were also President Lincoln's residence while planning the attack on Norfolk in 1862. 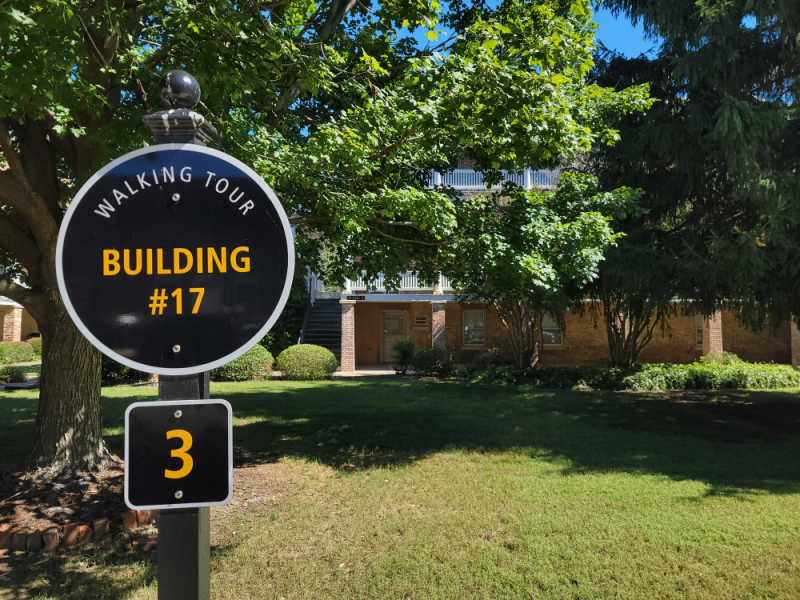 The house where Robert E. Lee lived with his family. While on leave from Fort Monroe, Robert E. Lee married Mary Custis, great-granddaughter of Martha Washington, at Arlington House in present-day Arlington, Virginia, and occupied these quarters from 1831-34. Lee's first child, a son, Custis Lee, was born here in 1832.

Chapel of the Centurion

Dedicated in 1858 in honor of the Roman centurion Cornelius and designed in the style of noted architect Richard Upjohn this chapel features many impressive architectural details including three Tiffany stained-glass windows. 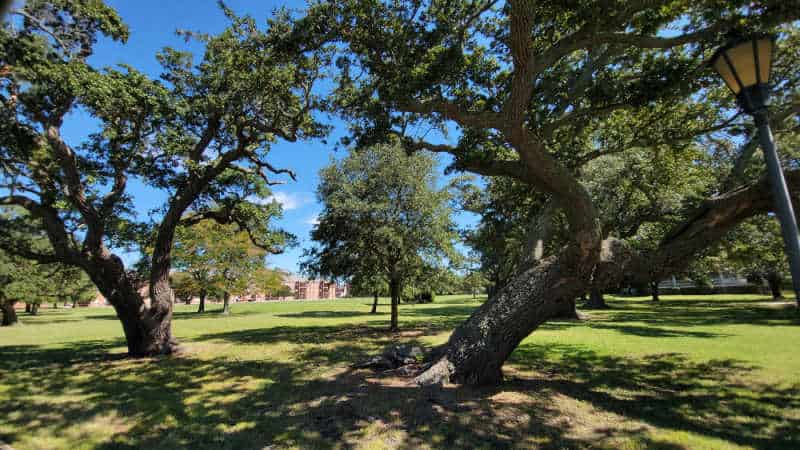 This open area, surrounded on three sides by mature live oaks including the 500-year-old "Algernourne Oak," was historically used as much for recreation as military exercises and ceremonies. 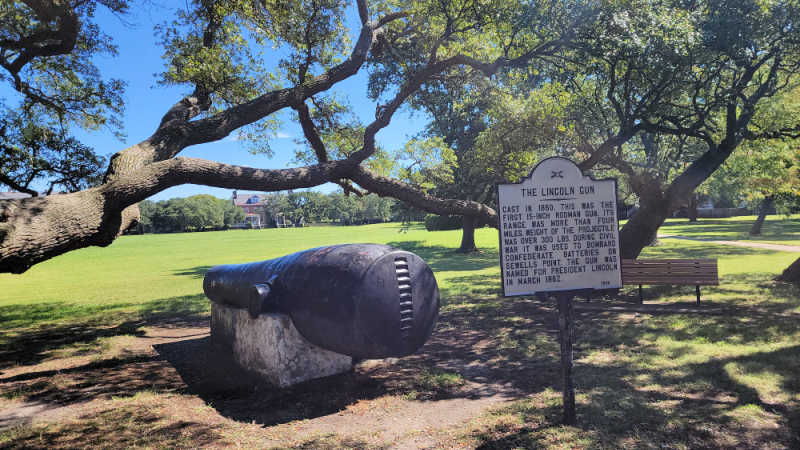 The Lincoln Gun can be seen along the parade grounds. It was cast in 1860 and was the first 15-inch Rodman Gun..

It had a range of more than four miles. 300-pound projectiles were used during the Civil War to bombard Confederate Batteries on Sewell Point.

The gun was named for President Lincoln in March 1862. 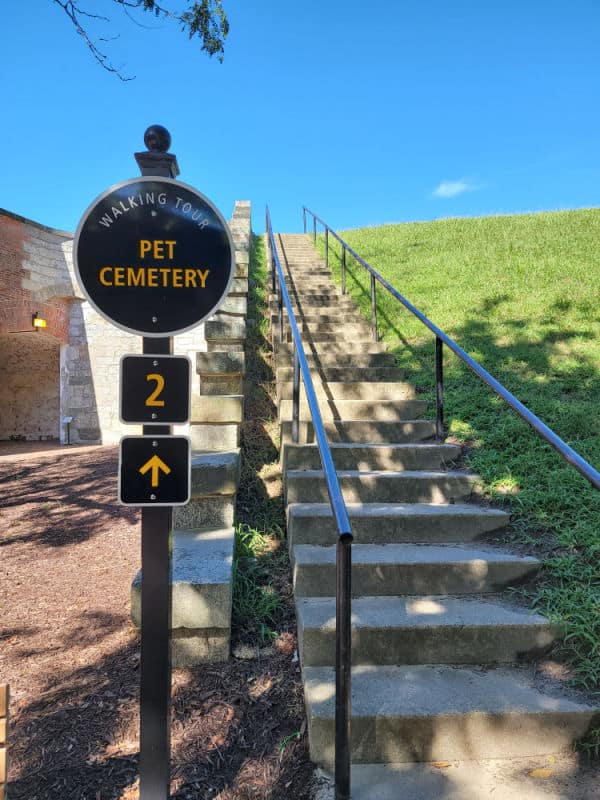 Fort Monroe's pet cemetery was founded in 1928. There are 243 graves with markers and an additional 400 reported graves in the cemetery.

Today the cemetery is closed to all burials. Visitors can go and view the gravestones of family pets, working war dogs, and unit mascots. 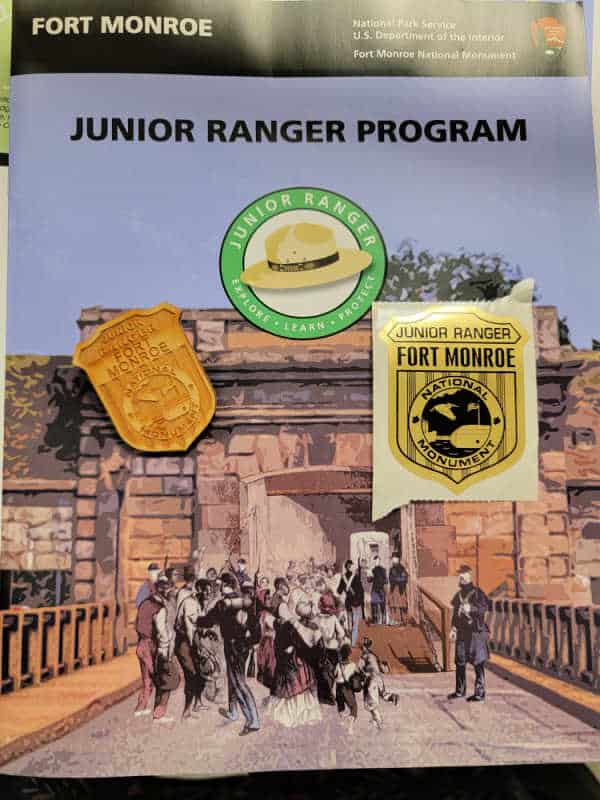 Junior Ranger programs are available at the Casemate Museum.

The Junior Ranger Booklet can also be downloaded here. 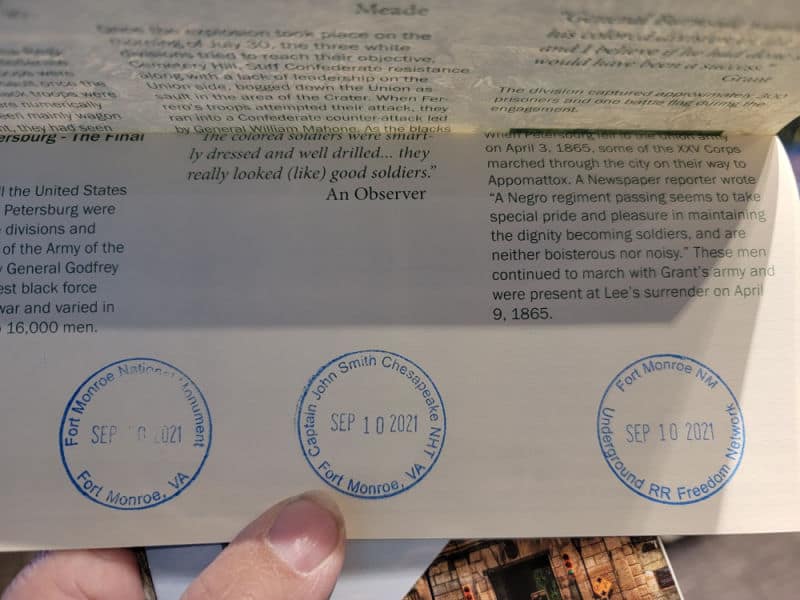 National Park Passport Stamps can be found in the visitor center gift store. There were three stamps during our visit

They also had a lighthouse stamp for the U.S. Lighthouse Society's Passport Program. 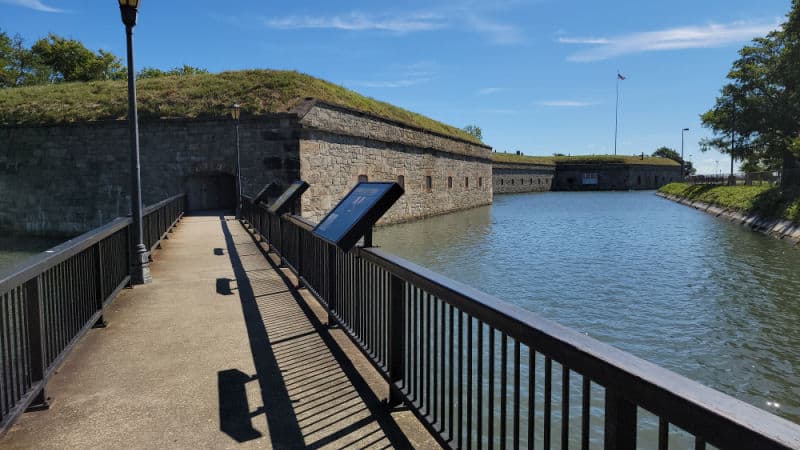 Things to know when planning a visit to Fort Monroe

Many of the buildings are currently occupied, when exploring the grounds please respect the resident's privacy by not peering into windows or opening gates.

Use caution when walking the ramparts that circle the top of the fort. Do not venture too close to the edge of the fort walls and stay clear of the moat.

How to get to Fort Monroe:

Fort Monroe National Monument is open year-round for outdoor activities like walking and exploring the grounds from dawn to dusk.

The beaches at Fort Monroe are open to the public all year from sunrise to sunset.

Entrance Fee: $0.00 There is no entrance fee to visit the park

Make sure to check out the park's Facebook Page for tons of history and live events they stream online.

The fort was designated a National Historic Landmark in 1960 and it is listed on the National Register of Historic Places.

Fort Monroe is managed and operated in partnership between the National Park Service, Fort Monroe Authority, and US Army. 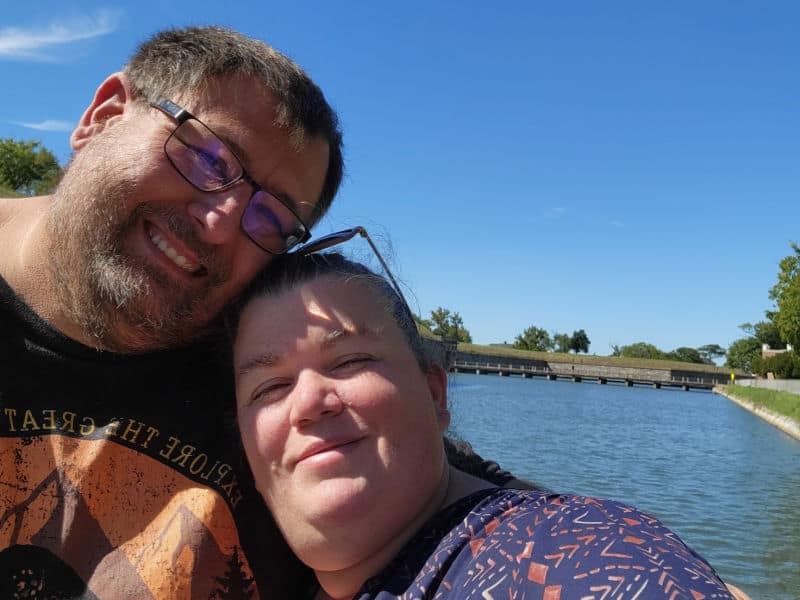