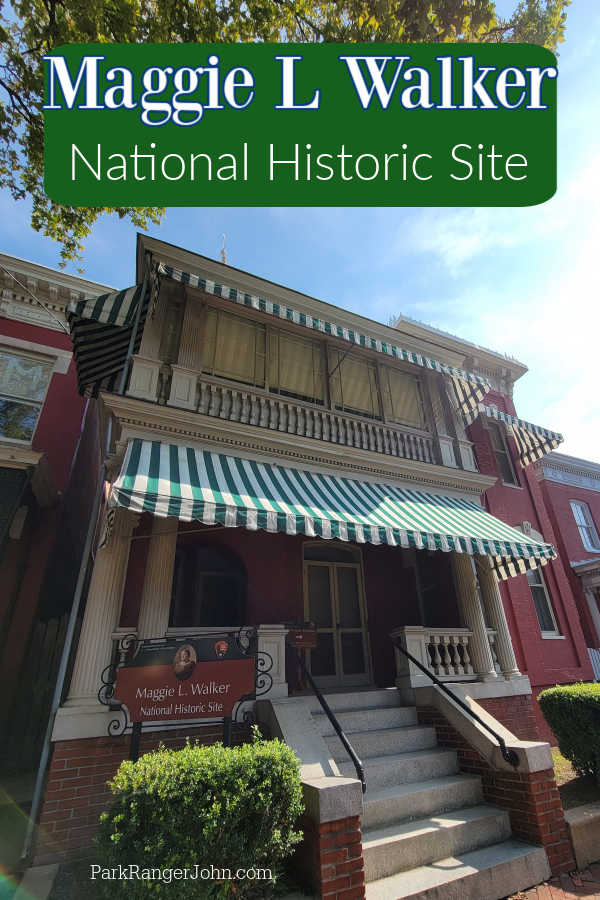 This US National Historic Site is located in Richmond, Virginia in the Jackson Ward neighborhood. This urban park site is one well worth visiting.

Maggie Walker was born in 1864 to a mother who had been enslaved. Maggie L Walker was the leader of an African-American fraternal and social organization.

While serving as the head of the Independent Order of St. Luke she realized a dream in 1903 when she founded the St. Luke Penny Saving Bank.

The bank's mission was for depositors to take the nickels and turn them into dollars.  By starting the bank Maggie L Walker became the first African-American woman to charter and serve as president of a bank in the United States.

Mrs. Walker was a civil rights activist, who pushed for economic empowerment during the Jim Crow era.

Maggie L Walker lived in the house until she passed away in 1934. When she passed away she had achieved prominence in many local, state, and national organizations including being on the board of directors for the National Association for the Advancement of Colored People (NAACP).

The house was owned by the Walker family until 1979 and still includes the elevator that was added in 1929 to assist Maggie L Walker in reaching the 2nd floor when she was confined to a wheelchair.

One fun thing to know is Mrs. Walker and her family had a pet collie named after Booker T. Washington who they were friends with.

Mrs. Walker also went to a play by Nobel Prize-winning playwright Eugene O'Neil who has a historic site dedicated to his work in California. 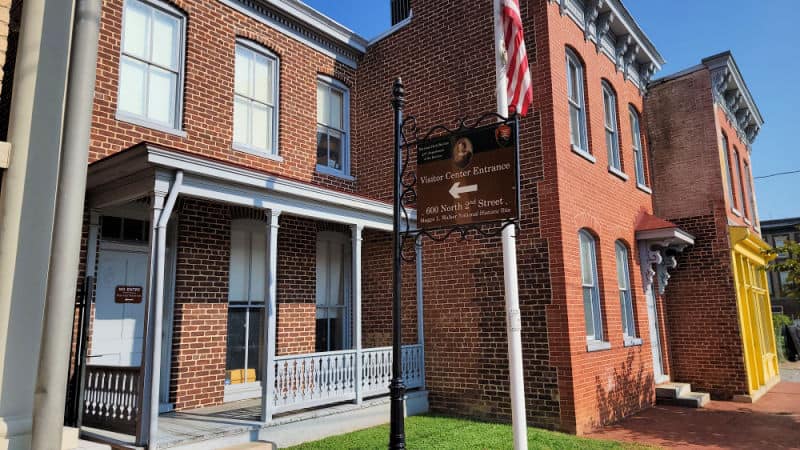 Maggie Walker National Historic Site is located on Leigh Street in Richmond, Virginia.  This area is known as “Quality Row” in the Jackson ward neighborhood.

The site commemorates the extraordinary life of Maggie Walker who devoted her life to advancement opportunities for African Americans and women.

Maggie Lena Mitchell was born on July 15, 1864 in Richmond, Virginia.  It is believed that Maggie never knew her father and her mother and father were never married.

Maggie’s mother, a former slave, worked as a cook for an abolitionist and married a man named William Mitchell.  The couple had a child, Maggie’s half-brother Johnnie, in 1870.

Maggie’s stepfather was head waiter for a prestigious hotel and the family had enough to rent a house nearby.

In 1876, William Mitchell was found dead in the James River.  While the authorities ruled his death a suicide, Maggie’s mother, Elizabeth, always believed he was murdered.

The death of William forced Maggie and her family into poverty.  Her mother began a successful laundry business and Maggie helped her mother by delivering clean laundry to patrons.

It was this experience that showed Maggie the opposite societal class from her own.  She determined that it should be possible for her to work hard and live the way the upper white class lived.

In the late 1970s, Richmond was fortunate to house quality schools for African Americans to attend.

Maggie graduated in 1883 and worked as a teacher for three years.  In September 1886, Maggie married Armstead Walker Jr., a wealthy bricklayer.

Maggie’s school forbade their teachers to be married while employed so she quit her job.  The couple eventually had three sons (one who died at just seven months old) and also adopted a daughter.

While Walker was attending high school, she had joined the Independent Order of St. Luke, a group that focused on helping the sick and elderly of Richmond.

During her years of teaching and then marriage, Walker grew through the ranks of the Order and used this as a way to help and encourage African Americans, especially women, to build successful careers and businesses.

By 1902, she had created and began putting out publications in the St. Luke Herald in the city of Richmond.  It gave many African American business owners a boost and a voice to become successful.

In 1903, Walker established the St. Luke’s Penny Savings Bank.  Walker was the first woman (of any race) to establish a bank in the United States.

In 1904, Maggie and her husband bought the home in which the historic site is located – 110 ½ East Leigh Street in Richmond.

This was known as the epicenter of African American owned businesses and homes.  Over the years, many of their children and grandchildren lived at that location with the couple.  The home, which began with 9 rooms, grew to 28 over the years of changes.

A smart businesswoman, Walker encouraged members of the St. Luke’s Penny Savings Bank to invest money early so their interest would grow.  She strived for African Americans to be able to afford financial independence from white business owners.

During the Great Depression, numerous businesses failed and many banks closed their doors.  Walker persevered by combining with another bank and creating the Consolidated Bank and Trust Company in Richmond in 1930.

Today, that bank is the oldest United States bank that has continually been managed by African Americans.

In 1915, Maggie Walker’s son, Russell, shot and killed his father.  Russell claimed he had mistaken his father for an intruder.  Russell was arrested for murder but was deemed innocent after trial.

Russell never quite recovered from this incident and died eight years after his father after struggling with alcoholism and depression.

Maggie Walker suffered health issues of her own.  She developed severe diabetes and was bound to a wheelchair for the last year of her life due to a wound on her leg.  Although she was in a wheelchair, that did not stop her from fighting for civil and women’s rights.

Walker helped found the Richmond chapter of the NAACP (National Association for the Advancement of Colored People) and also the Council for Colored Women.

In 1921, Walker ran for governor under the “Lily Black” ticket.  This was an all-black division of the Republican Party.  After the loss, she went back to focusing on making changes in her own community.

Walker died on December 15, 1934 due to complications of her diabetes.

It was in 1979 that her family home on Leigh Street was bought by the National Park Service and opened as a National Historic Site.

This amazing woman was an inspiration to African Americans and women alike in Richmond and around her country.

Her intelligence, perseverance and kind nature proved that anyone can be successful and make a difference if they have the drive to do it.

Even someone who has to battle through the racial divides of their surroundings can make a difference, which Maggie Lena Walker definitely accomplished. 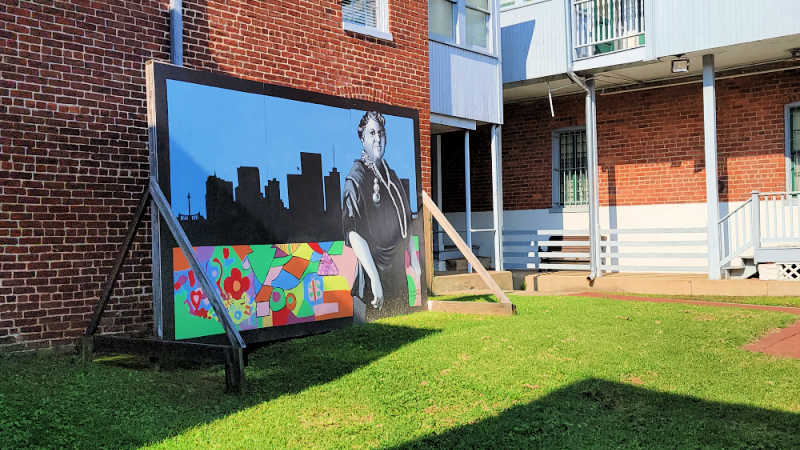 Pets are not allowed within the park buildings.

We had great cell service while at the park.

The site is closed Sundays and Mondays, as well as Thanksgiving, December 25th and January 1st.

Public Wifi is available at the park.

There is street parking in front of the park. Make sure to check street signs to confirm parking is allowed on the street.

There is also a parking garage a couple of blocks away near the Richmond Convention Center.

Maggie Walker NHS is part of the 2020 Passport Stamp Set.

There are 327 EV Charging Stations in Richmond, Virginia. 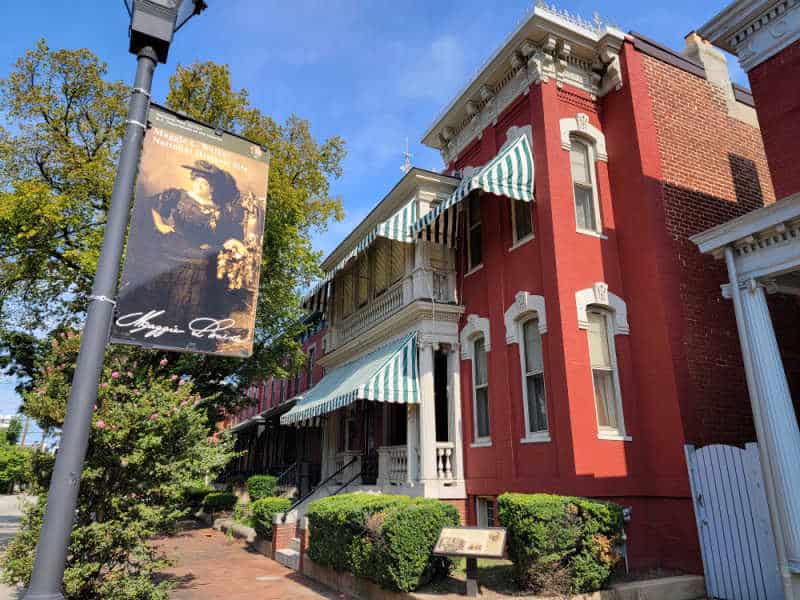 Check out how the park compares to other National Parks by Size. Hint the park is super small! 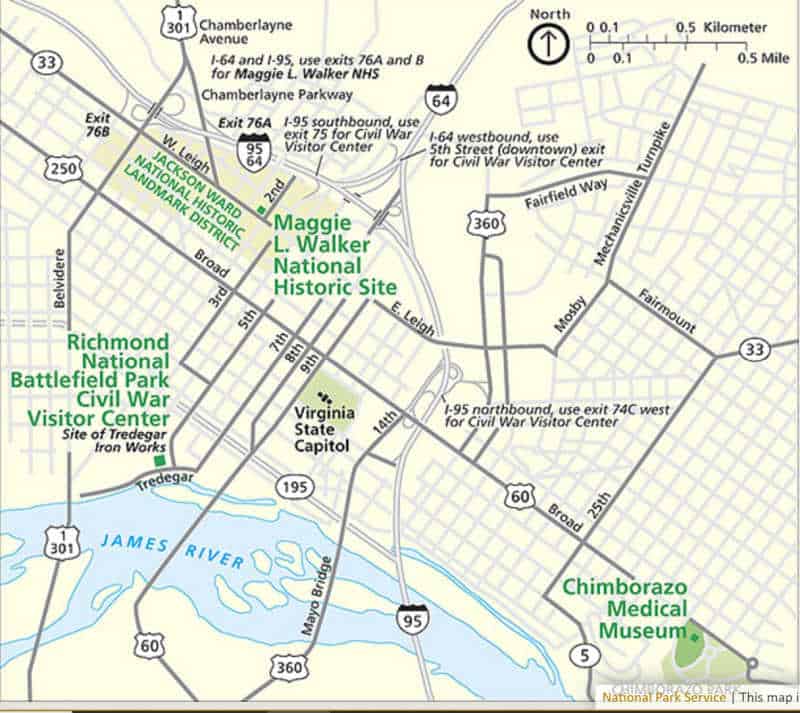 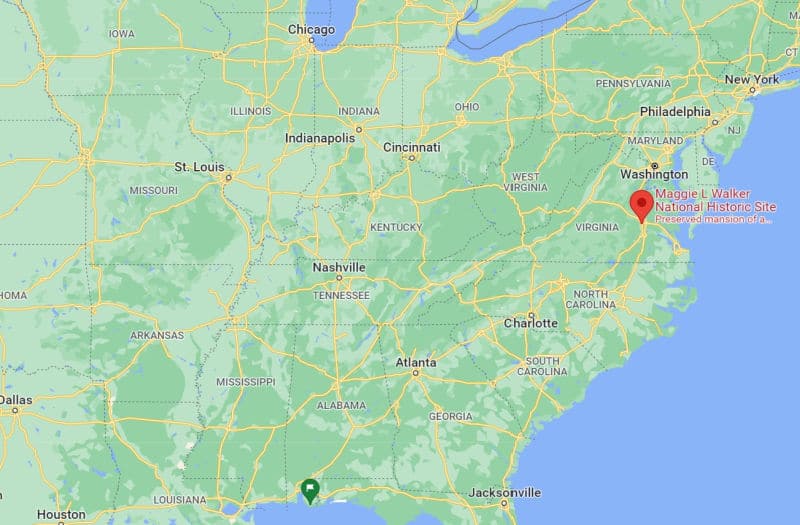 Maggie Walker NHS is located in Richmond, Virginia on the East coast of the United States.

The visitor center is located just down the street from Maggie Walker's house.

There are signs showing how to reach the visitor center entrance. 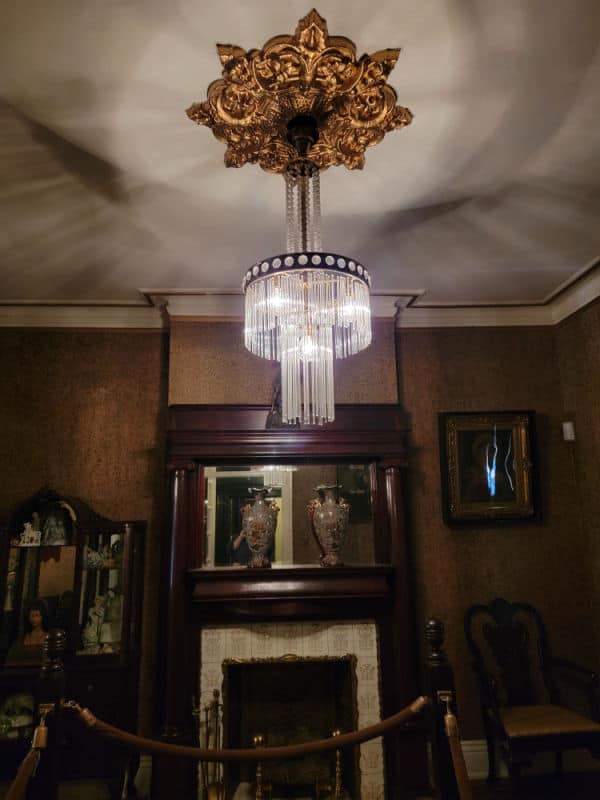 Coming South on I-95, take exit 79 east onto I-64 East to Norfolk, then follow directions coming from the west. 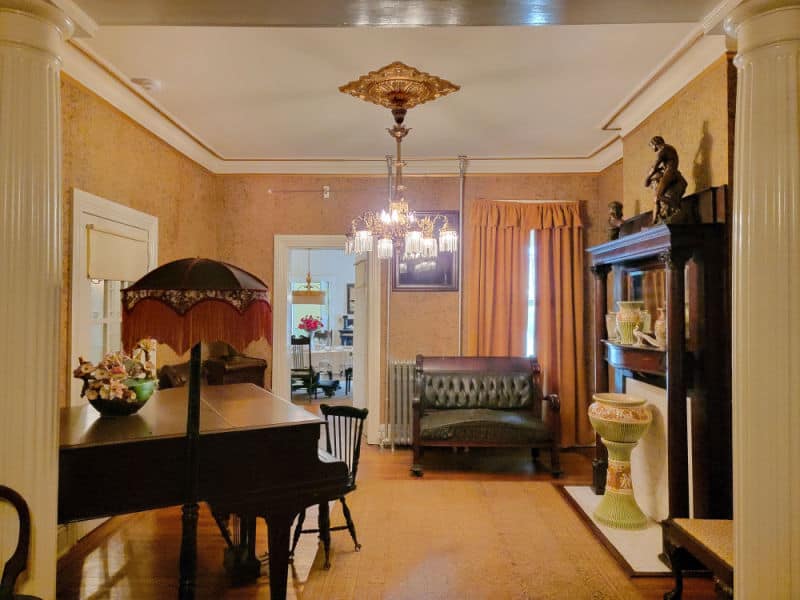 The best weather for visiting the park is late spring and during the Fall.

Summers are hot, muggy, and wet in Richmond, Virginia while winters are cold and snowy.

The hottest weather is from May 29 to September 15th with an average daily temperature above 8o degrees Fahrenheit.

The coldest weather is from December 1 to March 1st with an average daily high temperature below 55 degrees Fahrenheit.

The rainiest months are from May 4th to August 26th with greater than a 31% chance of rain.

The snowiest weather is from November 25 to March 18th with the most snow in February.

The muggiest weather is from May 24 to September 24th. 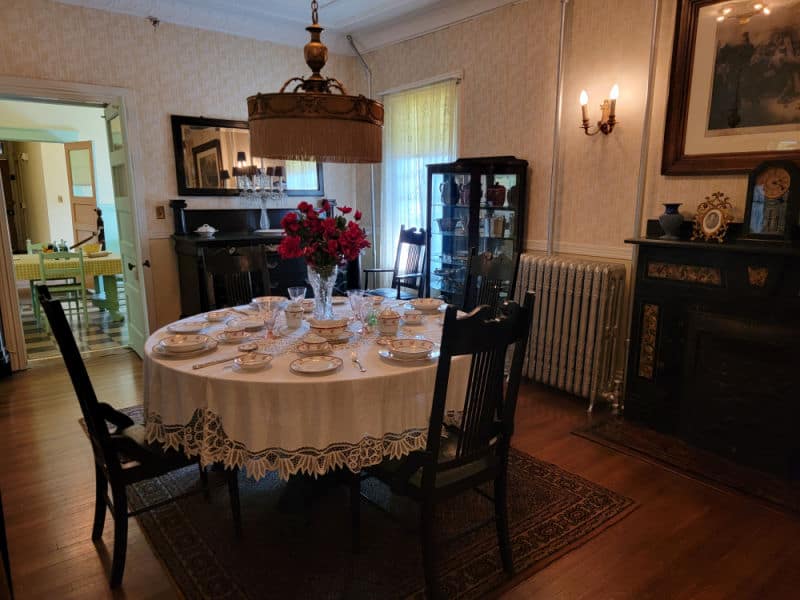 Best Things to do in Maggie Walker National Historic Site

The most important thing to do while visiting the park is to take a guided tour. You do not want to miss this tour!

The visitor center is the 1st place to stop when visiting the park. There is a small interpretive area, park store, and you can check-in for the park tours.

The Junior Ranger program is fantastic. You have the opportunity to learn not only about Mrs. Walker but also about the Jackson Ward district.

I loved learning that Mrs. Maggie Lena Walker visited Hot Springs NP and enjoyed hot baths and massages before it became a park.

You can download your Junior Ranger Book to get started today!

The historic tours are amazing! You have the opportunity to explore the 1st floor of Maggie Walker's family house on this guided tour.

During our tour, the ranger did an amazing job explaining how the house was adapted to Mrs. Walker's changing health and age.

Seeing the public and private areas of the house is amazing and you can see how different each area was lived in.

Make sure to explore the Jackson Ward Historic District which was home to not only Maggie L Walker but also Bill "Bojangles" Robinson and many others.

If you would like to hear more about the history of Richmond, Virginia and events that have occurred here there are a couple of great tours available.

Richmond Downtown Walking Tour - This 2 hour walking tour covers the origin of the city along with its role in the Revolutionary and Civil War along with the Civil Rights Movement.

Richmond Landmark Segway Tour - Take a 1 or 2 hour Segway tour of the major landmarks and notable sites in the city. 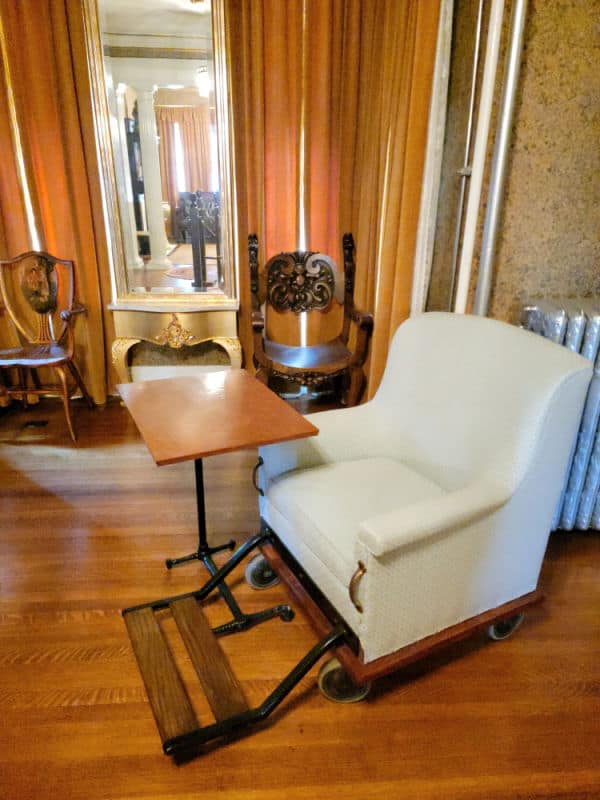 How to beat the crowds in Maggie Walker National Historic Site?

We were the only visitors we saw during our visit to the park.

Where to stay when visiting Maggie Walker National Historic Site

Click on the map below to see current rates for vacation rentals and hotels in Richmond, VA.

There are no National Park Campgrounds within the park. Here are a few campground options near Richmond, VA.

Check out all of the campgrounds in the area on CampSpot. 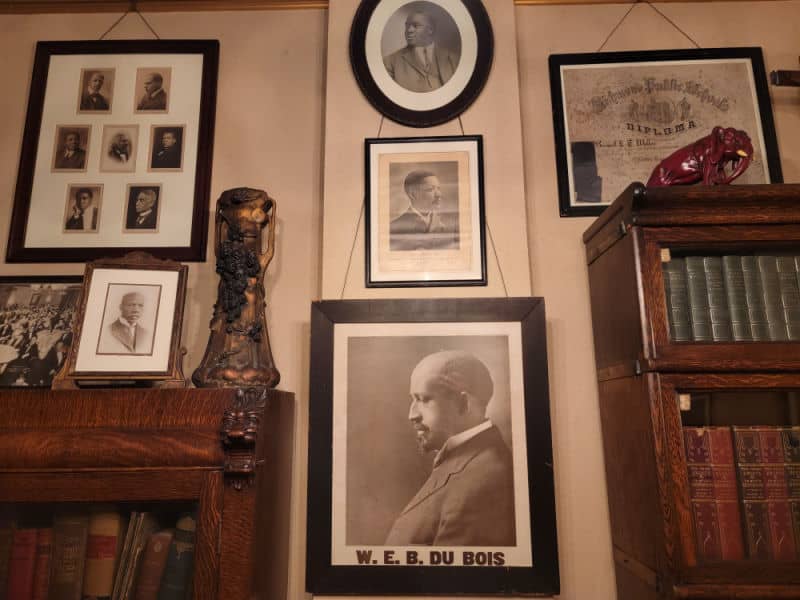 The library served as Mrs. Walker’s home office and reading room.
The walls are decorated with photographs and posters of African American luminaries from Frederick Douglass to Marcus Garvey; and Phyllis Wheatley to Paul Lawrence Dunbar. 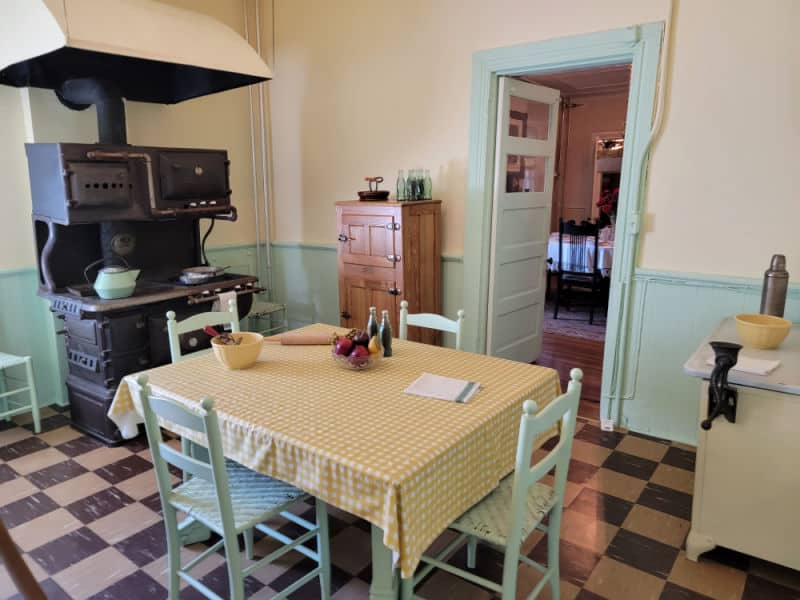