Complete Guide to Booker T. Washington National Monument in Virginia, including things to do, history, nearby lodging and camping, directions, and so much more. 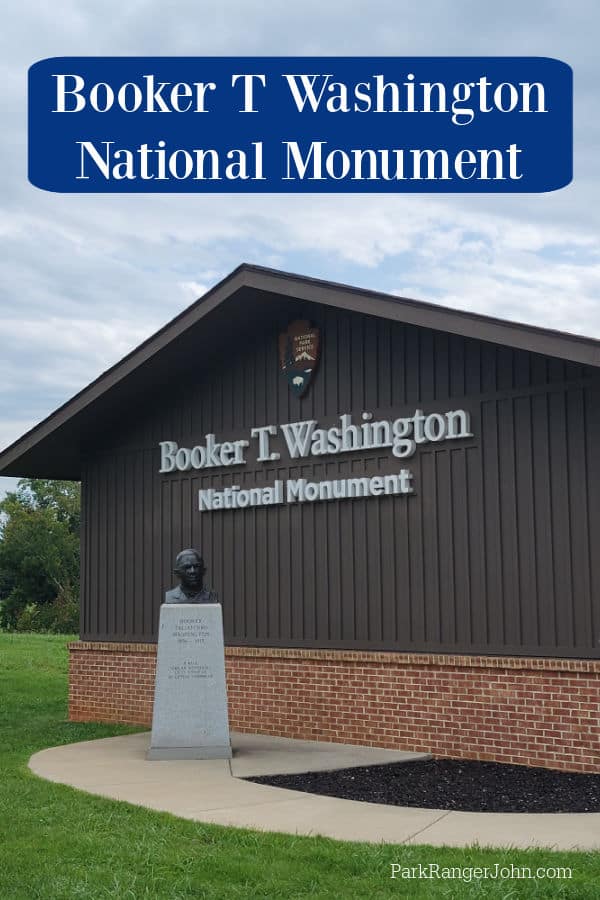 He was one of the most influential African American of his era. The founder of Tuskegee Institute, presidential advisor, and he was granted an honorary degrees from Harvard University in 1896 and a honorary Doctorate degree from Dartmouth College in 1901.

Booker T. Washington was born a slave in April 1856 on the 207-acre farm of James Burroughs.

In 1850, James and Elizabeth Burroughs moved their children and a few slaves to this 207-acre tobacco farm in southwestern Virginia.

Booker T Washington's' mother was the plantation cook, a slave named Jane. He was born in 1856.

He spent his youth working on the farm. He worked until the end of the Civil War. 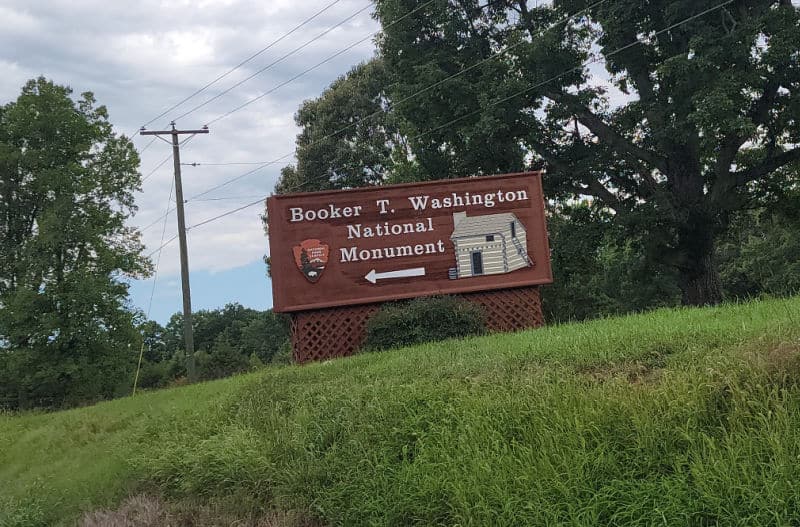 It is worth visiting, especially for those who have an interest in history, particularly the history of African-Americans in the United States.

It is also a worthwhile destination for those who enjoy outdoor recreation, as the monument is located in a beautiful natural setting with hiking trails and other opportunities for outdoor activities.

At times, Washington was considered a controversial figure in American politics and society. In 1895 Washington gave his now famous Atlanta Expedition Speech seemed to some that Washington was advocating for racial segregation.

So, who was Booker T Washington, and why was he an important figure in American history?

Who was Booker T Washington?

Booker T Washington was a former slave who, in 1881, became the founder and president of the Tuskegee National and Industrial Institute in Alabama. Booker was a leader in the African American community and of the African American elite during a tumultuous period in the Southern United States.

Washington was part of the last generation of African American leaders born into slavery. Not only was Booker T Washington an educator and orator, but he became an influential author too. High-ranking politicians sought Washington out. Washington became an advisor to President Theodore Roosevelt and William Howard Taft.

The Birthplace of Booker T Washington

Booker T Washington, or Booker Taliaferro as he was named, was born into slavery in April 1856. Booker was not given a surname at birth and later chose Washington himself.

Booker lived as a slave on the Burroughs plantation for nine years. As a slave, Booker was not allowed to attend school despite wanting to. Booker’s tasks included carrying James Burroughs daughter, Laura Burroughs, books to the school where she taught. Booker also provided water to the men working in the tobacco fields and transported grain to the mill.

Washington was a child when America erupted into Civil War. The Burroughs family's sons left the plantation to fight for the Confederacy. Five of the sons fought at Gettysburg. Washington recalled that the owners of the plantation suffered during the Civil War, as they could not get the food and products to which they were accustomed.

During the Civil War, it was James' widow who ran the plantation, as James had died in 1861. Approximately ten slaves were working at the plantation during the war. When the war ended in 1865, enslaved people in the southern states were legally freed.

A Union soldier arrived at the Burroughs plantation and read what Booker believed to be Abraham Lincoln’s Emancipation Declaration. Booker's mother, Jane, moved her family to Malden, West Virginia, where Booker worked in a salt mine.

The Life of Booker T Washington After Emancipation

As a free person, Booker was allowed to attend school after he worked. Booker worked packing salt at the salt mine and later in the coal mines. It was while working in the coal mine that Booker heard about the Hampton Institute. The school was founded by Brigadier General Samuel Chapman specifically for formerly enslaved people to get an education.

Booker attended the school in 1872. In 1879 was invited back to the school to be a teacher. When the Tuskegee National and Industrial Institute was founded Washington was nominated to be the school's first principal. Booker was 25 years old when he became the head of the institute. He worked there until he died in 1915.

As the head of the Tuskegee Institute, Booker became a leader in the African American community. as Lynchings in the South became more frequent, Booker made a speech on the role he believed African Americans should fill in American society.

Booker believed African Americans would gain the acceptance of white Americans through bettering themselves with education to provide needed skills. In 1985 Booker made his famous ‘Atlanta Compromise’ speech to a mostly white audience.

In the speech, Booker spoke of how he believed African Americans should remain separate from white Americans. His speech divided the African American community, beginning a feud with one of the most prominent leaders, W.E.B. Du Bois.

Booker became an advisor to two of America’s presidents, and the first African American to be invited to the White House in 1901 to advise Theodore Roosevelt on racial matters. President Taft continued to seek Booker’s advice during his time as president. 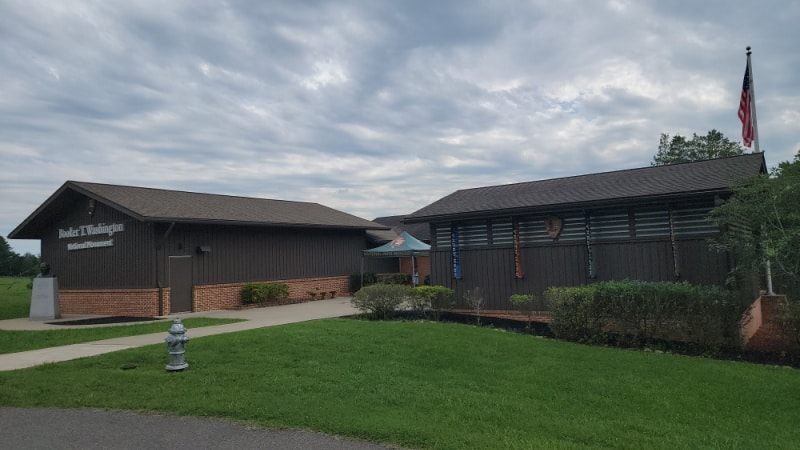 Things to know before your visit

Leashed pets are allowed and required to stay on trails, roads, and developed areas but are not allowed in the park buildings.

We had great cell service in the park.

The park is open daily from 9 AM to 5 PM. Park is closed on Thanksgiving Day, Christmas Day, and New Year’s Day.

There is no public Wi-Fi in the park.

There is a nice size parking area near the visitor center.

There are at least 44 EV Charging stations within 30 miles of Hardy, Virginia. 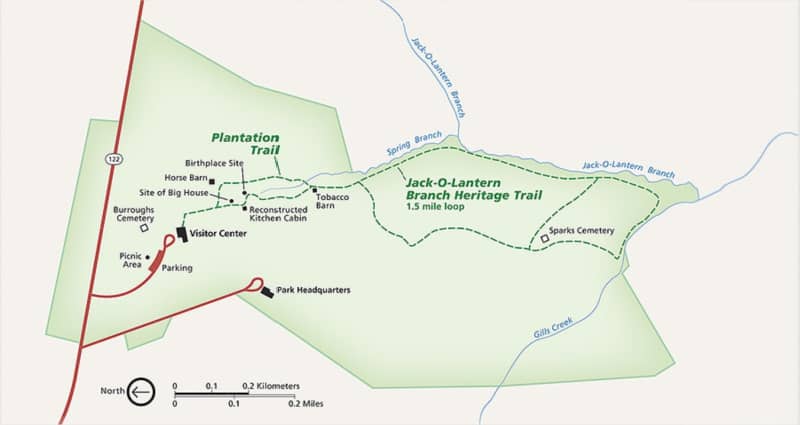 The Visitor Center is just inside the main entrance. 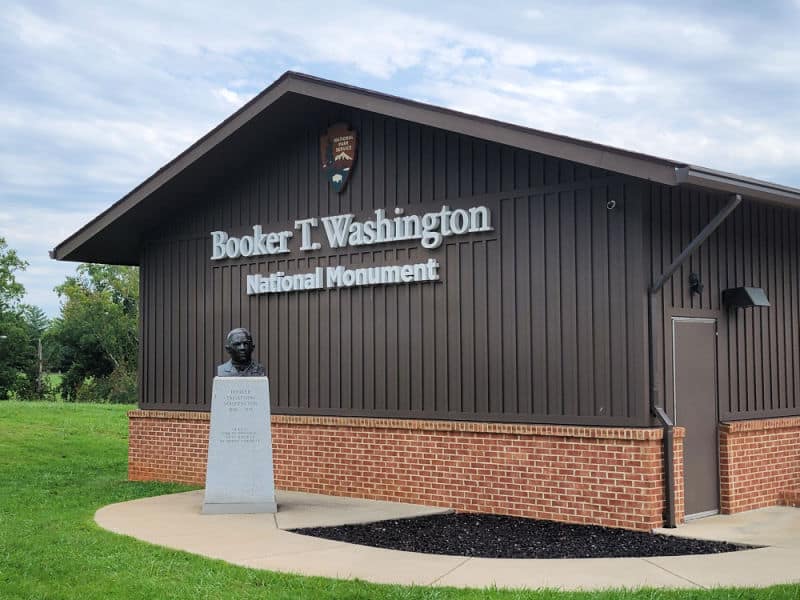 Getting to Booker T Washington NM 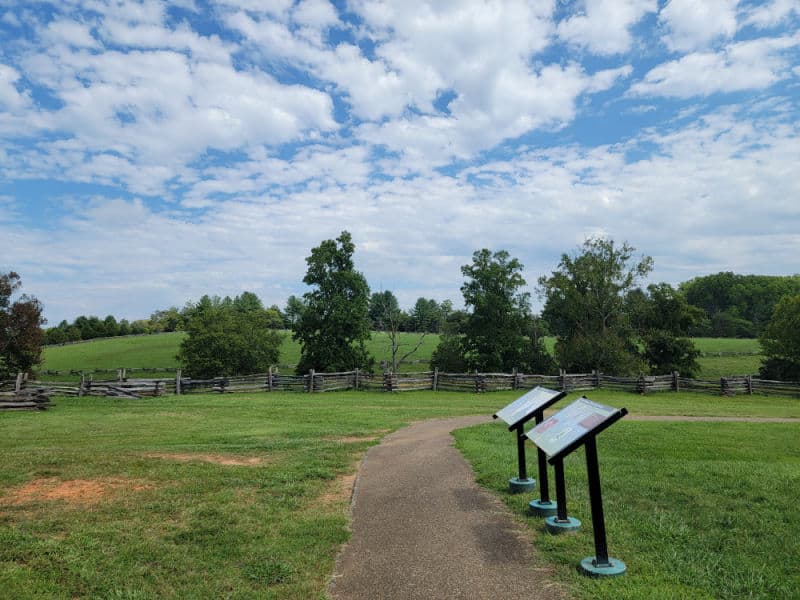 The best time to visit the Booker T. Washington National Monument is when the weather is pleasant, as this can make for a more enjoyable and comfortable experience.

The hottest weather is from May 28th to September 15th, with an average daily high temperature above 79 degrees.

The coldest weather is from November 29th to March 1st, with an average daily high temperature below 54 degrees.

The snowiest weather occurs between November 21 to March 19, with a snowfall of at least 1 inch a month. February gets the most snow, with an average of 5 inches. 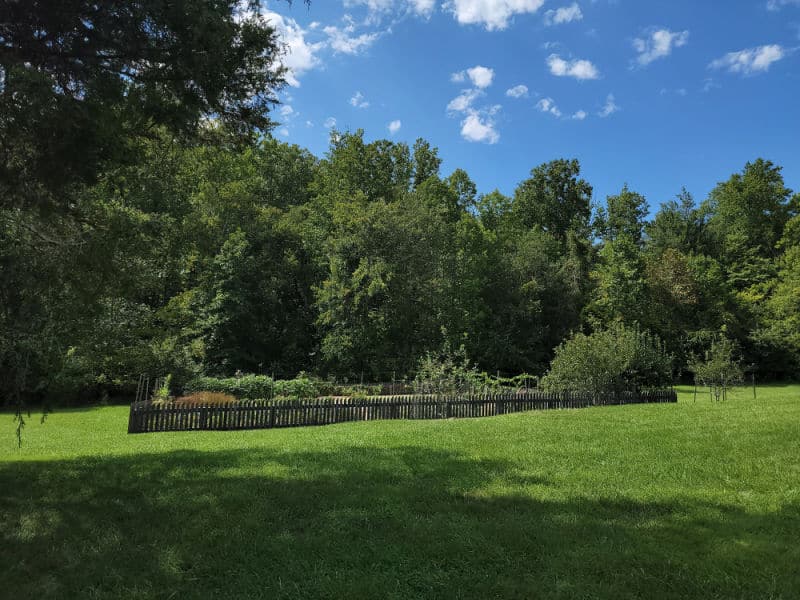 Best Things to do in Booker T Washington NM

We suggest planning a minimum of a few hours to visit the park. The visitor center is amazing and you can easily spend hours exploring it and learning more about Booker T. Washington.

The visitor center is the perfect place to start your visit. There is a really great film that shares what life was like for Booker T. Washington.

There are exhibits about slavery and tobacco farming.

You can also pick up a Junior Ranger booklet from the visitor center and shop in the small park store.

You can watch the Measure of a Man park video online.

The Junior Ranger program can be completed while in the park. It is great for all ages!

There is a picnic area near the visitor center. 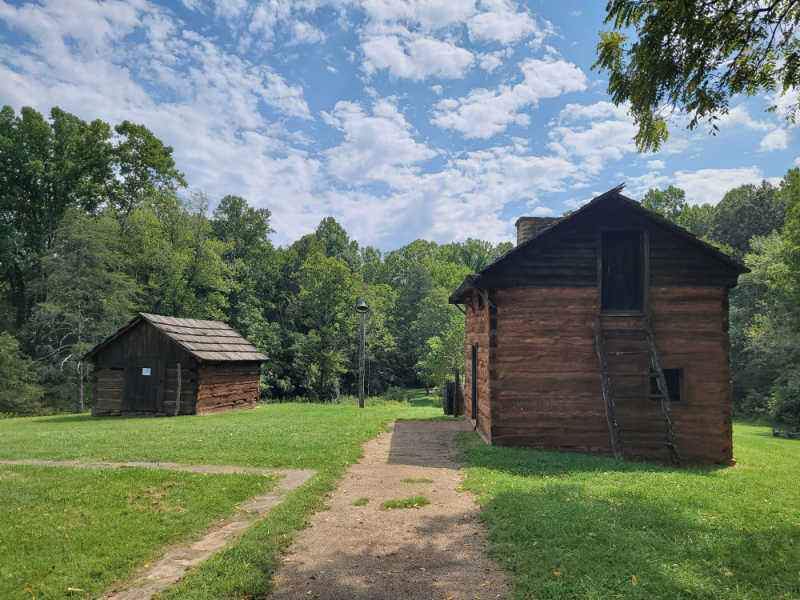 The Plantation Trail is a ¼ mile loop through the historic area.

It is paved and does have a decline to reach the historic area which you will need to walk up to reach the parking area.

At the end of the trail, you can visit a reconstructed kitchen cabin where Booker T Washington's mother worked and they lived.

“Here I learned to love the soil, to love cows and pigs and trees and flowers and birds and worms and creeping things. I have always been intensely fond of outdoor life.” - Booker T. Washington

The Jack o Lantern Trail is a mile and a half through the fields surrounding the park. You can find trail guides at the visitor center. 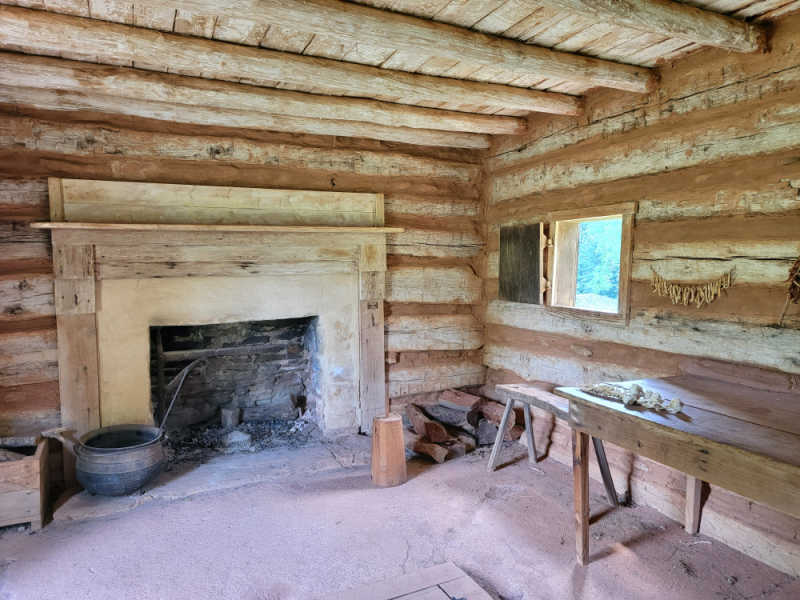 We did not encounter any crowds during our visit to the park.

The closest lodging to the park is 10 miles away.

SpringHill Suites by Marriott Roanoke - free breakfast, a free roundtrip airport shuttle, and a grocery/convenience store. The onsite bistro, Reflect, features international cuisine. Free in-room Wi-Fi is available to all guests, along with a coffee shop/café and dry cleaning/laundry services.

Click on the map below to see current vacation rentals and lodges near the park.

There are no designated National Park Campgrounds within the park. 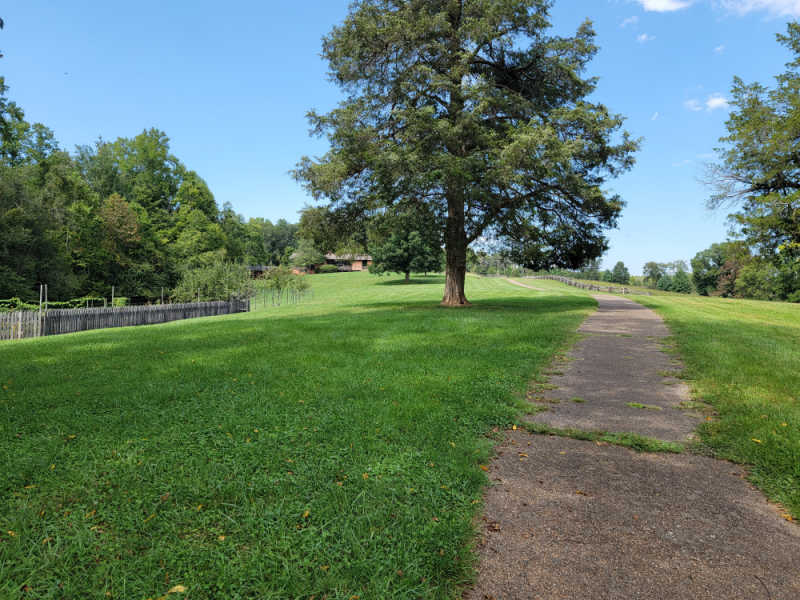 -He was the first African-American man on a U.S. postage stamp.

-The "T" stands for Taliaferro, a name given to him by his mother.

-Booker recruited the famous plant scientist, George Washington Carver, to come and teach at his school.

-His father was a white plantation owner. Booker never met him.

-He wrote a book about his life called Up From Slavery.

-He was married three times and had three children. His wives all played important roles at the Tuskegee Institute.

-He was the first African-American man who was invited to the White House, not counting servants. 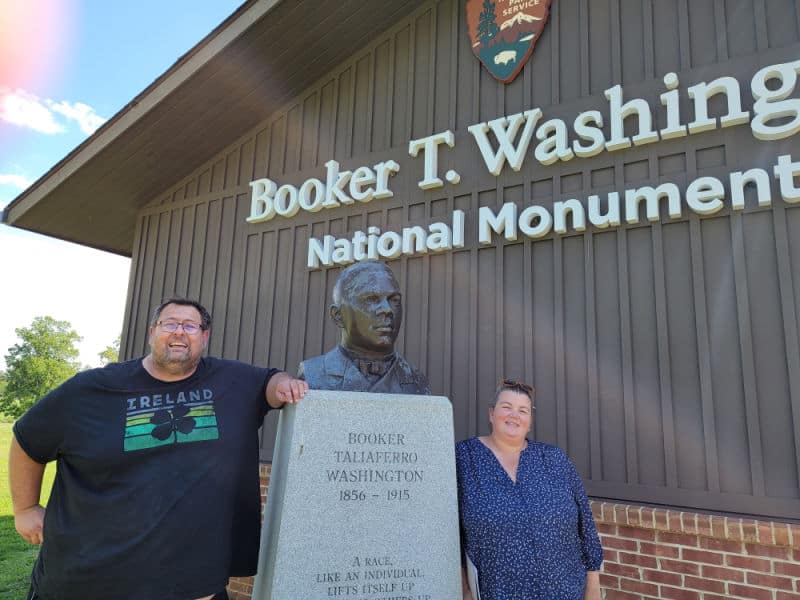 Check out all of the US National Monuments