Epic Guide to Lincoln Home National Historic Site in Illinois including things to do, history, how to reach the park, and more. 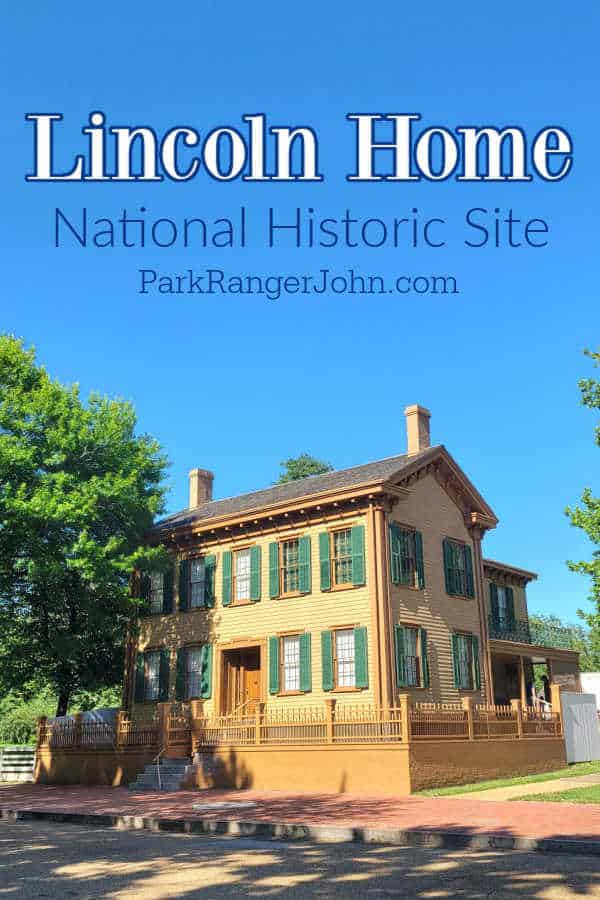 Lincoln Home National Historic Site is located is Springfield, Illinois.  This site preserves four blocks of buildings, including the focal point - the home where Lincoln lived from 1844 to 1861, right before he became the 16th President of the United States. 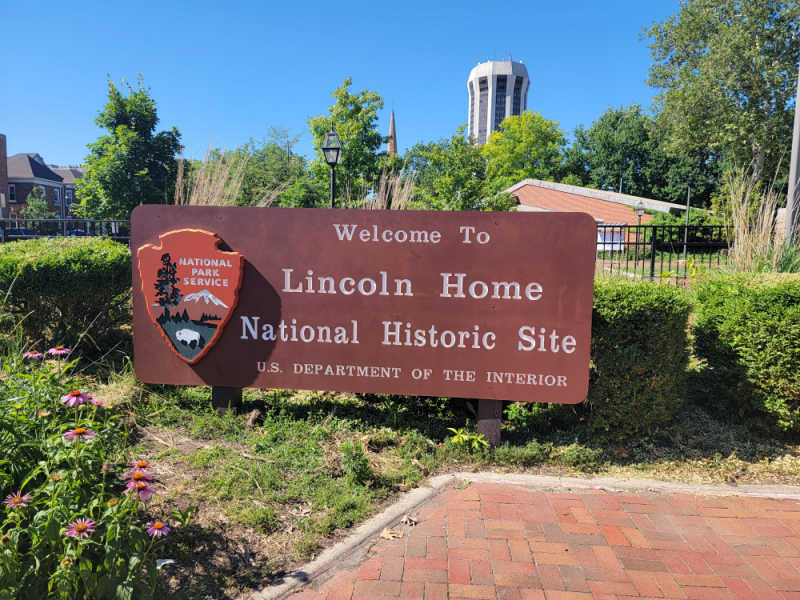 Yes! The site offers a look at Abraham Lincoln's life before he became president. The guided tour of the house is fascinating and there are multiple other houses to visit.

Twelve years after the death of his mother, Lincoln’s father, Thomas, moved the family from Indiana to Illinois near present day Decatur.

Illinois had been a state for only 12 years and was still a frontier wilderness.  After only one year of frontier schooling and mainly educating himself, Lincoln left for Springfield.

This is where Lincoln began his successful career as a lawyer, met the love of this life, and had four children.

Lincoln arrived in Springfield in 1837, the year that the city became the state capital.  The town’s population was then 2,500 and was quickly becoming the focal point for law and government in the state, even though it was still surrounded by farms and livestock.

Two years after Abe arrived in the city, a woman from a prominent Kentucky family named Mary Todd moved to Springfield as well.

Lincoln met Mary at her sister’s home in Springfield.  The couple married in November of 1842. Before buying their first home together, the Lincolns lived in a boarding house called the Globe Tavern.

It was at this time that Lincoln was considered one of the greatest courtroom attorneys in the state of Illinois.

Lincoln often had to travel which did not suit Mary well as she missed her husband dearly when he was away.

In 1844, Lincoln purchased the first and only home he ever owned.  Purchased from Reverend Charles Dresser, the man who married Abe and Mary, the home cost $1,500.

Located at 413 South Eighth Street on the corner of Jackson, three boys were born to the Lincolns at this home.  Edward, William, and Thomas were all born between 1846 and 1853.

Robert had been born in 1843, shortly after the couple was married.  Sadly, little Edward Lincoln died of tuberculosis at the home just a few weeks short of his fourth birthday.

Throughout the years, the Lincolns made numerous improvements on the house, namely in 1856, when they turned the one and a half story cottage into a full two story home.

This home, that the Lincolns lived in for 17 years, shaped the family man and President that Lincoln was destined to become.  Abe and Mary’s bedroom, although private and out the way from visitors, was furnished to reflect a very prosperous family per the tastes of Mary.

By 1860, the boys’ bedroom was shared by William and Thomas, as Robert was already away at school.  The home’s parlor was a most important and formal place and was the location for one of the most important events in Lincoln’s life.

In 1860, the Republication Convention, held in Chicago, chose Lincoln as their presidential candidate.

In 1860, the Republication committee traveled to Springfield and gave this news to Abe and Mary while meeting in the parlor.

After Lincoln was elected, the family gave away most of their belongings as they prepared to move to Washington D.C.

The Lincolns rented the home to Lucian Tilton and his family.  Tilton was the president of the Great Western Railroad.

By this time, Springfield had become a bustling capital city with a population of 10,000.  In 1861, Lincoln delivered a farewell speech to the city of Springfield before leaving.

“Here I have lived a quarter of a century, and have passed from young to old man.  Here my children have been born, and one is buried.  I now leave, not knowing when, or whether ever, I may return, with a task before me greater than that which rested upon Washington.  Without the assistance of the Divine Being who ever attended him, I cannot succeed.  With that assistance I cannot fail.”

After Lincoln’s assassination on April 15, 1865, the home was obtained by Lincoln’s oldest son Robert.

On May 4, 1865, a large funeral procession passed by the home in Springfield on its way to Oak Ridge Cemetery where Lincoln, Mary, and three of his four sons are buried.

The family home became a common place for rallies, ceremonies and mourners to visit.

Mary was quoted as saying “I cannot bear to return to the scenes of the happiest times in my life without my family.”

In 1887, Robert donated the home to the state of Illinois so that it would be better preserved for generations to come.

Other buildings preserved for visitors to experience is the Old State Capitol where Lincoln served as State Legislator, the building which served as the law office for Lincoln and his partner William Herndon, and the Lincoln Depot, which is the location from which Lincoln left Springfield for his 1861 inauguration.  The site was established in August of 1971. 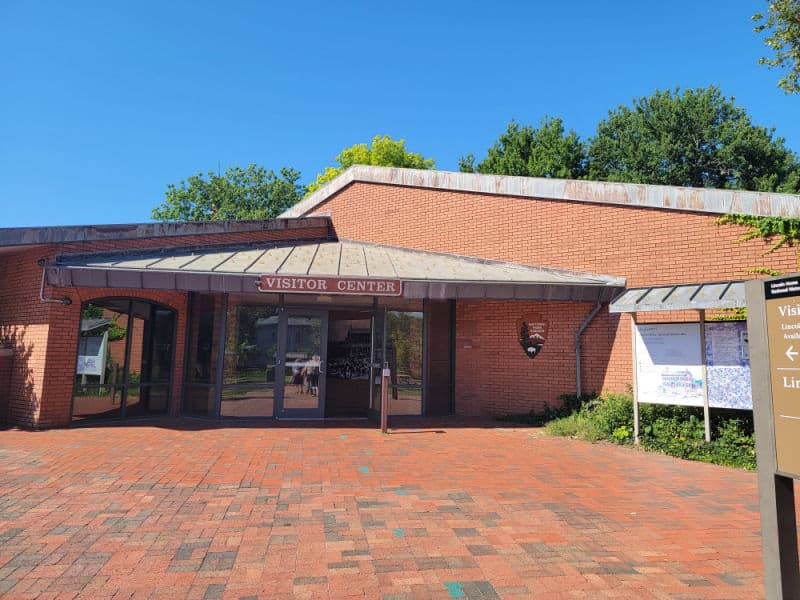 Pets must be on a leash less than 6 feet in length while in the park. Pets are not allowed in park buildings including the visitor center.

Park Grounds are open from 6 am to 11 pm year-round.

There is free Wi-Fi service provided by the city of Springfield.

Debit and credit cards can be used to pay for parking. The park does not accept cash for parking.

Lincoln Home NHS is part of the 1987 Passport Stamp Set

There are 97 EV Charging stations within Springfield, Illinois.

At least 8 of these are free EV Charging Stations. 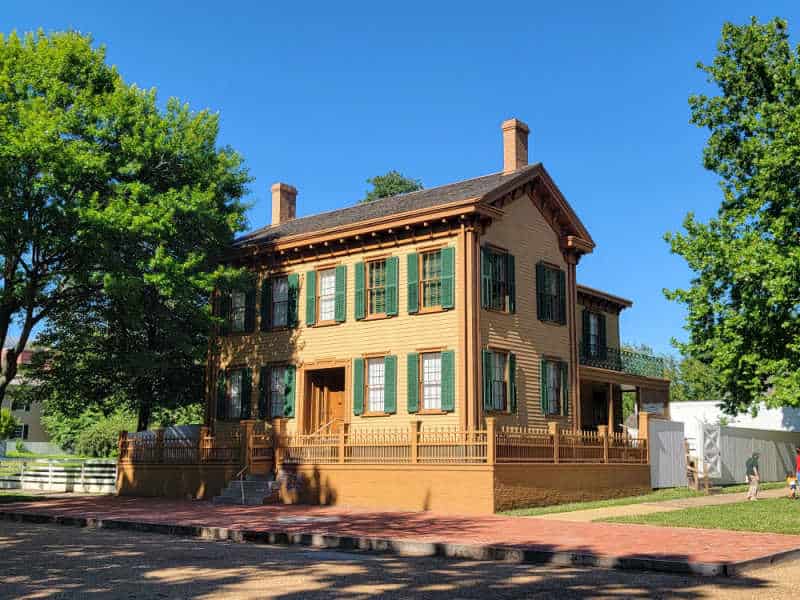 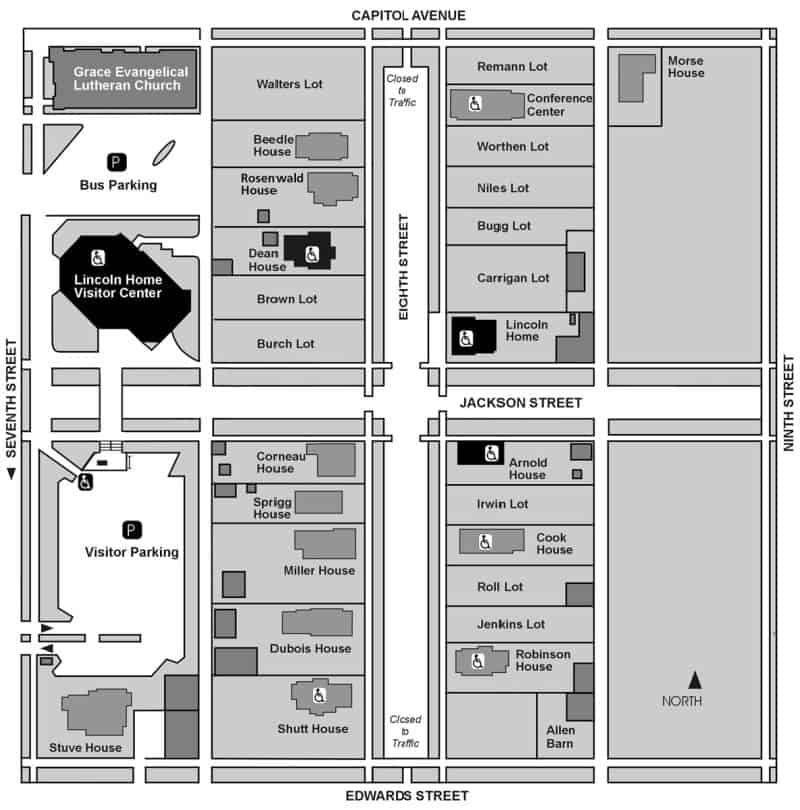 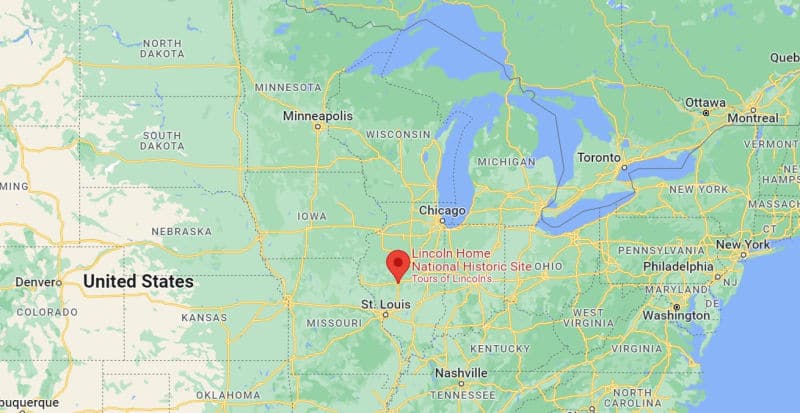 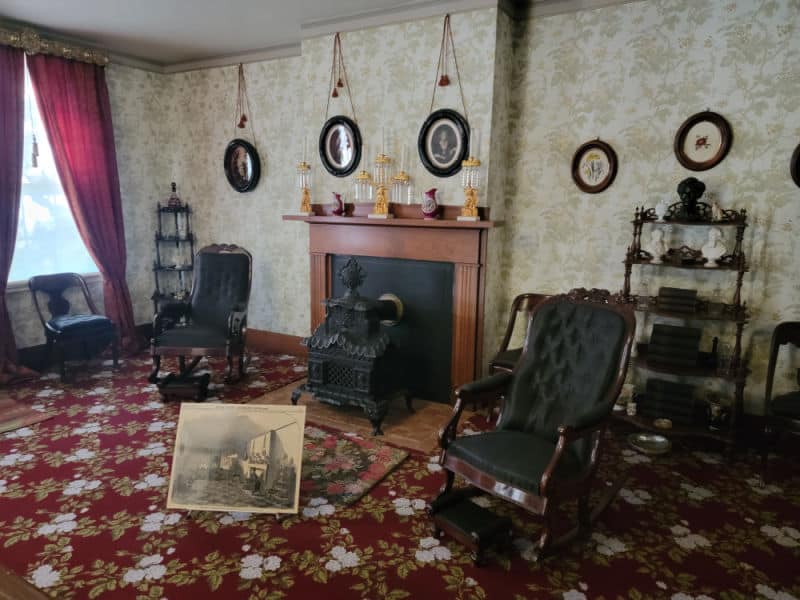 Amtrak travels to Springfield, Il, and is within walking distance of the park. Approximately 7 blocks away.

The Greyhound Bus station is not within walking distance of the park. 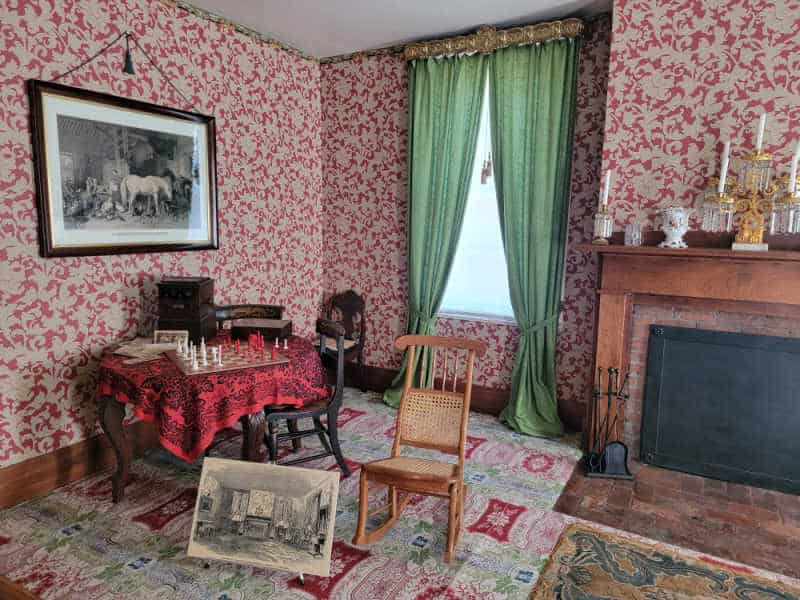 Late spring to early fall are the perfect time to visit the park. The weather should be fantastic.

The hottest weather is from May 20th to September 23rd with an average daily temperature above 76 degrees.

The coldest weather in Springfield is from November 30th to February 28th with an average daily temperature below 46 degrees.

Snow occurs on average from November 19th to March 28th with the most snow falling in January. 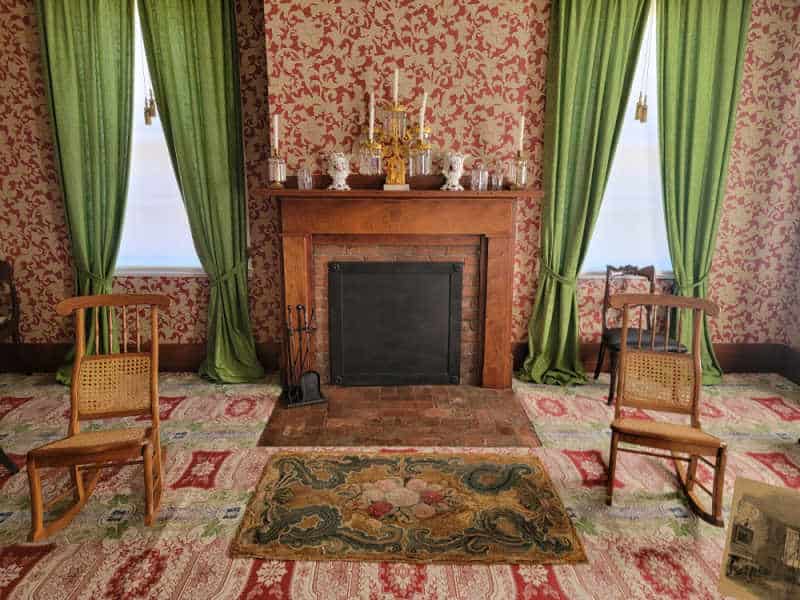 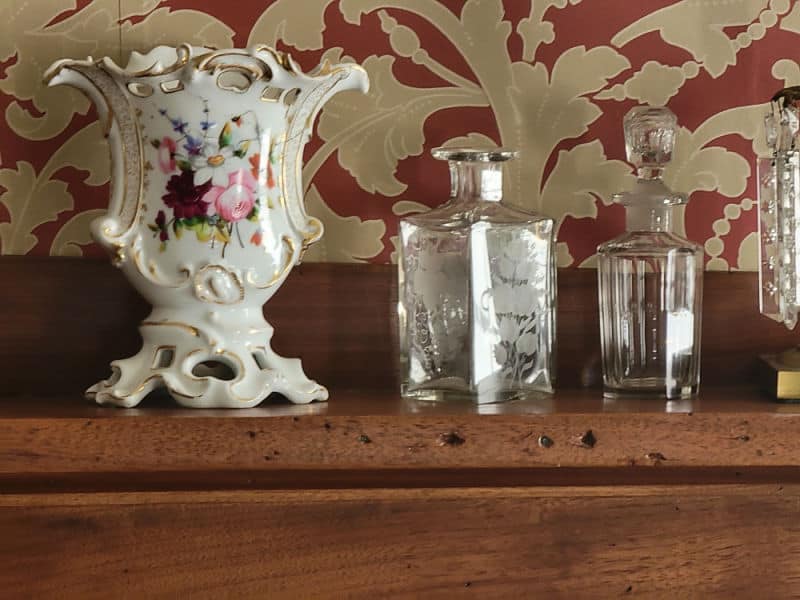 Best Things to do in Lincoln Home National Historic Site

In order to see the inside of the Lincoln Home you have to be on a park tour.

Tour tickets can be picked up at the front desk of the visitor center. Tickets are first-come, first-served.

Each tour is limited to 15 individuals.

The home tour highlights include:

There are two films at the visitor center including a film about Abraham Lincoln's life in Springfield.

The main park film is played on the hour and lasts between 20-25 minutes starting at 830 am with the final film playing at 4:30 pm. 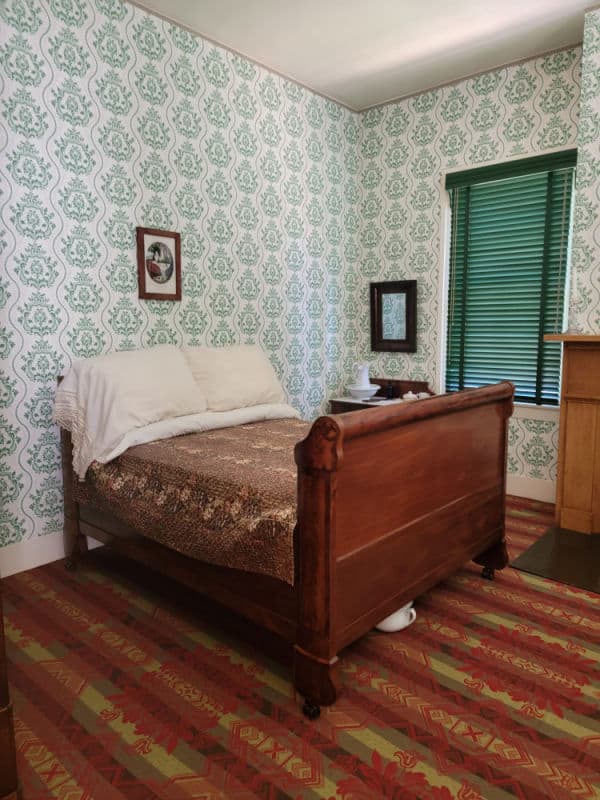 There are no hiking trails within the park but there are additional areas to explore outside of the Lincoln Home.

Make sure to bring water and plan to be outside in the sun.

How to beat the crowds in Lincoln Home National Historic Site?

The best way to beat the crowds is to make sure you are at the park early enough to get tickets for the guided tour.

There is a limited number of tickets available for each guided tour. 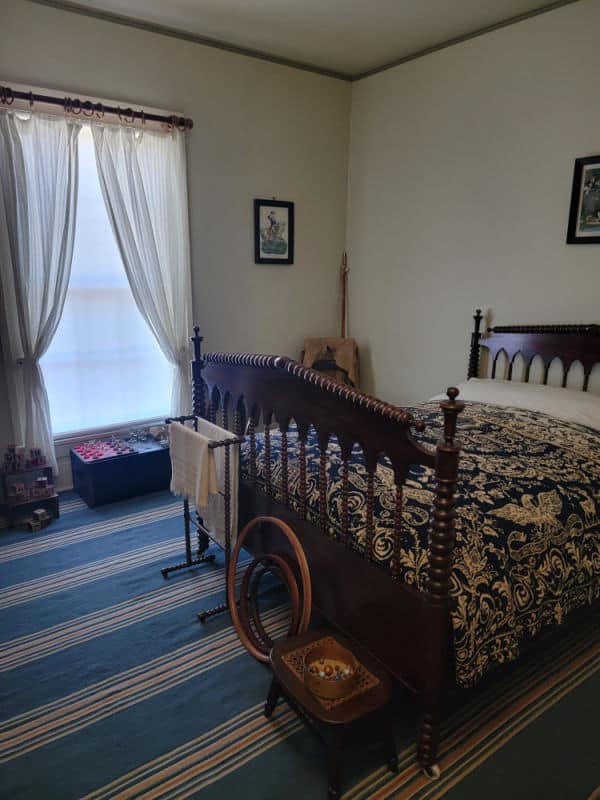 Where to stay when visiting Lincoln Home NHS

There is lodging available in Springfield, Illinois. Click on the map below to see the current rates for hotels and vacation rentals near the park.

This campground offers lodging, RV and Tent Sites, A waterfront, fishing and more.

Check out more campgrounds in the area on CampSpot 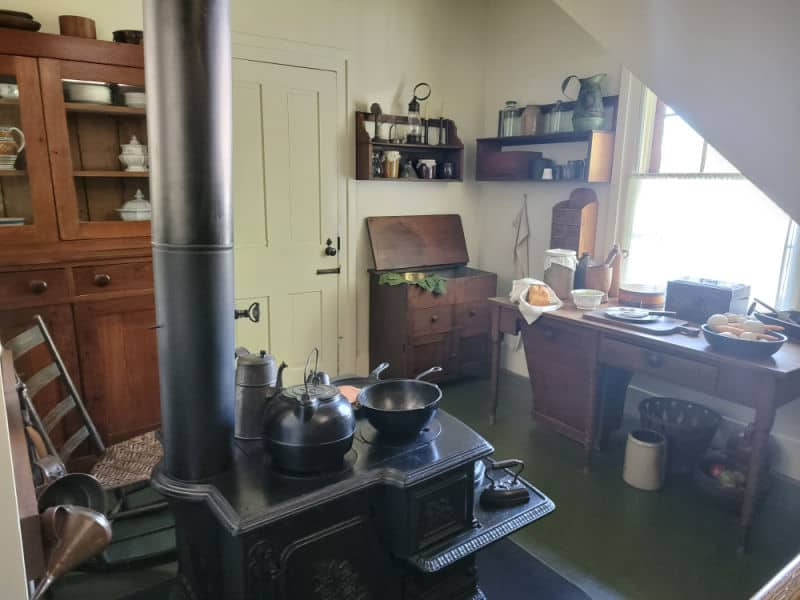