George Rogers Clark National Historical Park is located in Southwestern Indiana in the town of Vincennes. The park honors a pivotal event in the American Revolution. 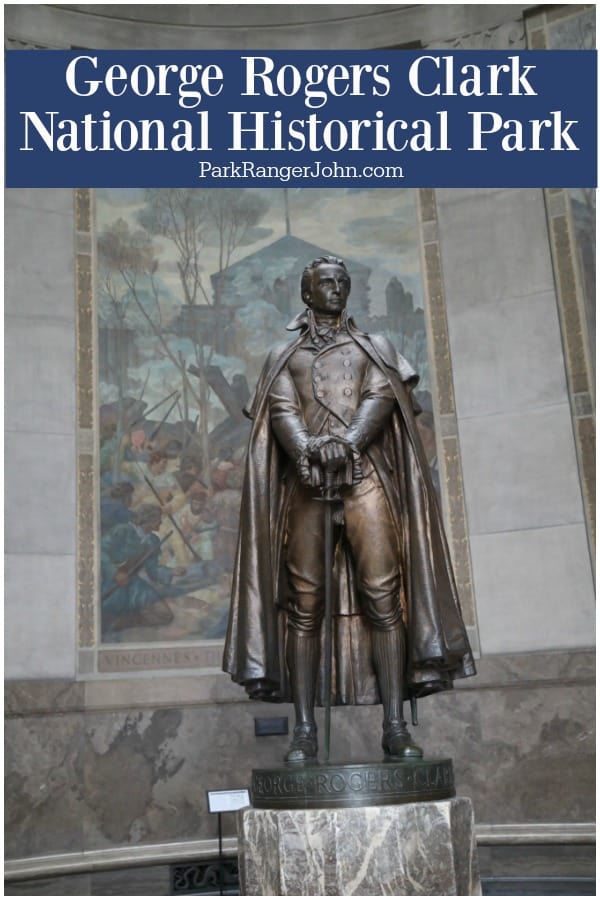 American Colonel George Rogers Clark fought with success against the British and their Indian allies capturing forts along the Mississippi River near St. Louis.

Clark led 170 American and French militiamen to Vincennes to surround Fort Sackville after the British recaptured it in December 1778.

Clark and his men surrounded Fort Sackville and forced the British to surrender on February 25, 1779.  Clark is credited with preventing the British from achieving their goal of driving Americans from the new frontier.

This win helped push the British to sign over vast areas of the United States that now compromise the states of Ohio, Indiana, Illinois, Michigan, Wisconsin, and the eastern part of Minnesota.

George Rogers Clark was the brother of William Clark who would co-lead the Lewis and Clark Expedition.

Yes, The park is really interesting and provides an opportunity to learn about the American Revolutionary War and the Lewis and Clark Expedition. 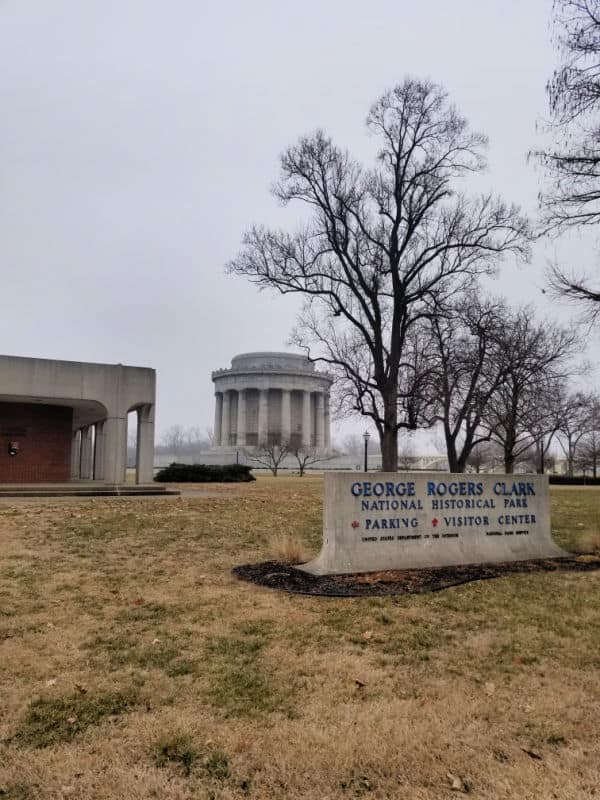 George Rogers National Historic Park is located in Vincennes, Indiana on the banks of the Wabash River, about 120 miles southwest of Indianapolis.

George Rogers Clark was born November 19, 1752 in Virginia.  His family comprised of six sons and four daughters, all whom were extremely close.

His younger brother William later served as one of the leaders during the famous Lewis and Clark Expedition.

In his late teen years, Clark worked to survey land along the Ohio River, being taught the skill by his grandfather.  In 1772, against British law, many Virginians were crossing over into Kentucky to look for land to settle.

By 1776, Clark has secured land for himself and some of his family and friends in Kentucky.

With the increase in Native American threats in his new area, Clark and others pleaded to Virginia for protection; they wanted their new land to be considered a county.

Governor Patrick Henry eventually gave Clark supplies to defend themselves against Native Americans and declared Kentucky as part of Virginia.  After these events, it was evident that settlers in the area greatly respected Clark’s leadership.

As the onset of the American Revolutionary War raged, the late 1770s saw the British enlisting the help of allied Native Americans to attack settlers in the west.

George Rogers Clark’s county was among those targeted.  With the support of Henry, Clark assembled 150 frontiersmen and 20 settlers to defend their territory.

Clark then led his men through the freezing flooded waters of the Illinois country.  Dressed as natives and walking in single file, they were careful to go undetected as they made their way to strike.

Clark kept the spirits of his men high, encouraging them to sing along the way.  Clark and his men struck Fort Sackville unexpectedly, as the British forces were unable to even open their gunports.

British commander Hamilton surrendered.  The British never regained these lands throughout the remainder of the war.

Clark continued to lead military actions in the Northwest until the end of the war in 1783.  Clark then acted on the Board of Commissioners, supervising land in Illinois and also served as an expert on Indian Affairs along the Ohio River.

It was well known that Clark never did receive compensation for much of his efforts during the war.  This was likely due to the fact that his bravery and patriotic spirit to people in the west were unknown to many of those who held power in the east.

Nonetheless, Clark suffered financially during his life after the war.  Clark did finally retire to Clarksville, IN in a small cabin and operated a grist mill.

In 1809 he suffered a stroke and shortly after, his leg had to be amputated.  With no anesthesia, he requested fifers and drums to be played outside his cabin as the operation was performed.

He lived thereafter with his sister in Louisville, KY and died in 1818 at the age of 66.

The George Rogers National Historic Park was built to commemorate Clark’s noble accomplishments in expanding the United States into the Northwest Territory.

The park is located on land that was believed to be the location of Fort Sackville.  President Calvin Coolidge approved the construction of a memorial and Franklin D. Roosevelt dedicated it in 1936.

The state of Indiana, along with the federal government, procured a total of $2.5 million for the construction of a memorial to sit within the park and honor Clark.

The memorial building is a circular structure made of granite with 16 columns surrounding it.  A bronze statue of George Rogers Clark stands inside the building, under the dome.

Other statues and memorials can be found throughout the park, including a statue that honors Francis Vigo, and Italian-American merchant who closely assisted General Clark, and another bronze statue honoring Father Pierre Gibault, who also assisted Clark in the war.

No structures dating from the Revolutionary War time period are present in the park today.

The George Rogers Clark National Historic Park was chosen to be displayed on an “American the Beautiful Quarter” representing the state of Indiana in 2017. 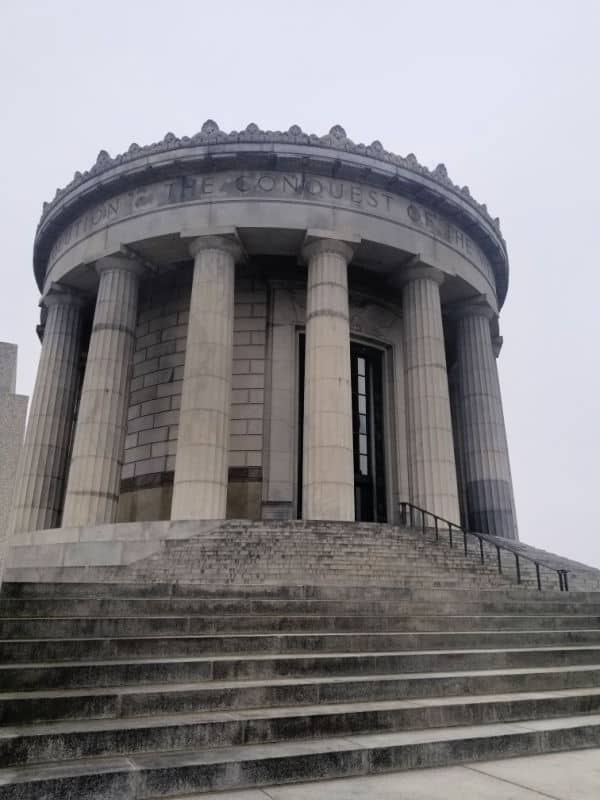 Pets must be restrained on a leash no longer than six feet in length.

We had fairly good cell service while visiting the park.

The memorial closes 15 minutes before the visitor center.

WiFi is not available in the park.

Parking is available down the road from the George Rogers Clark National Historical Park Visitor Center at 401 S. 2nd St.

A limited amount of parking can be found in front of the visitor center.

No food or drink is permitted in the visitor center or the George Rogers Clark Memorial.

There are no gas stations available within the park but there are multiple nearby.

There are 8 EV charging stations within 30 miles of Vincennes, Indiana 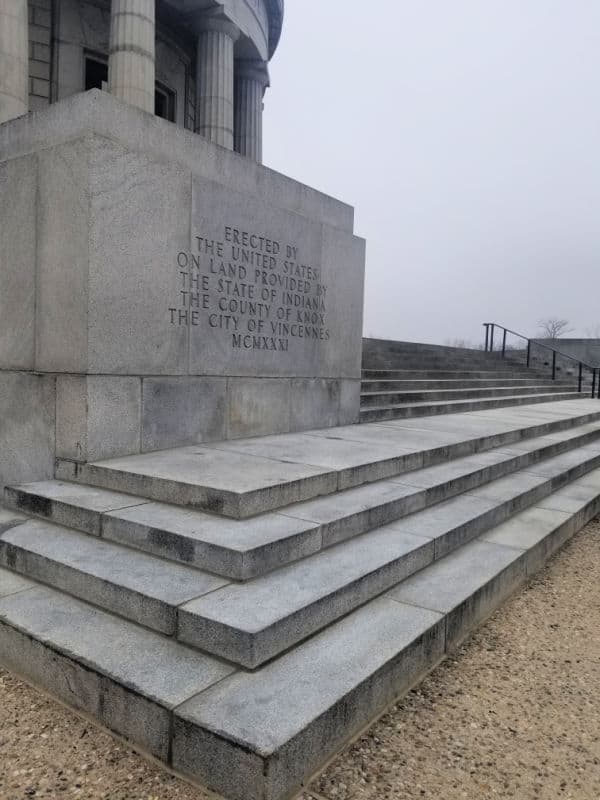 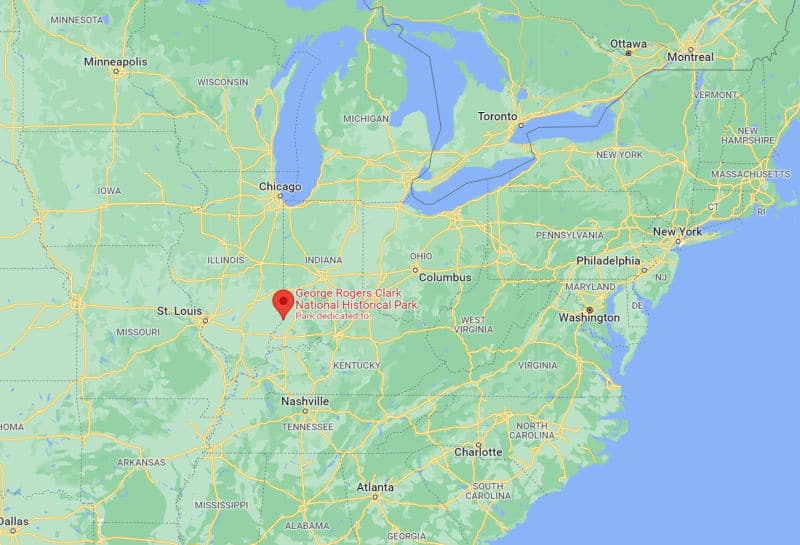 The visitor center is located next to the parking area. 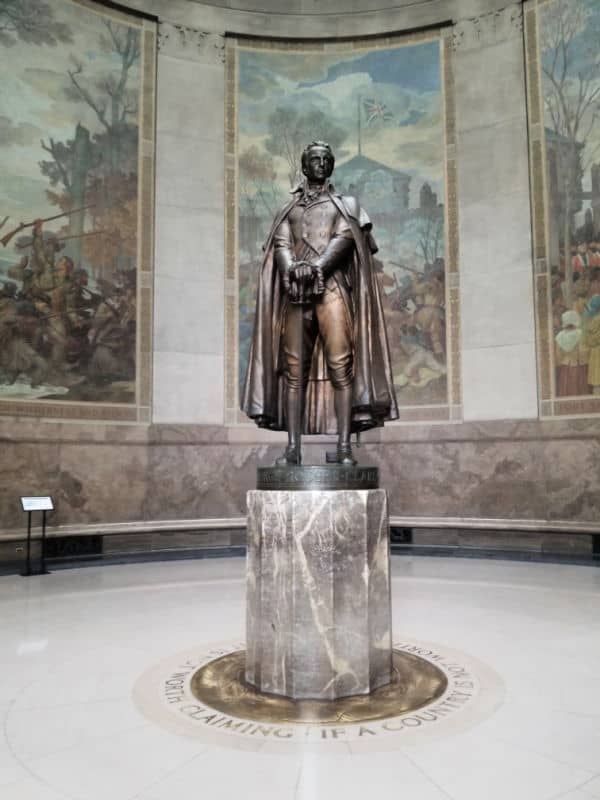 From Illinois via the Memorial Bridge 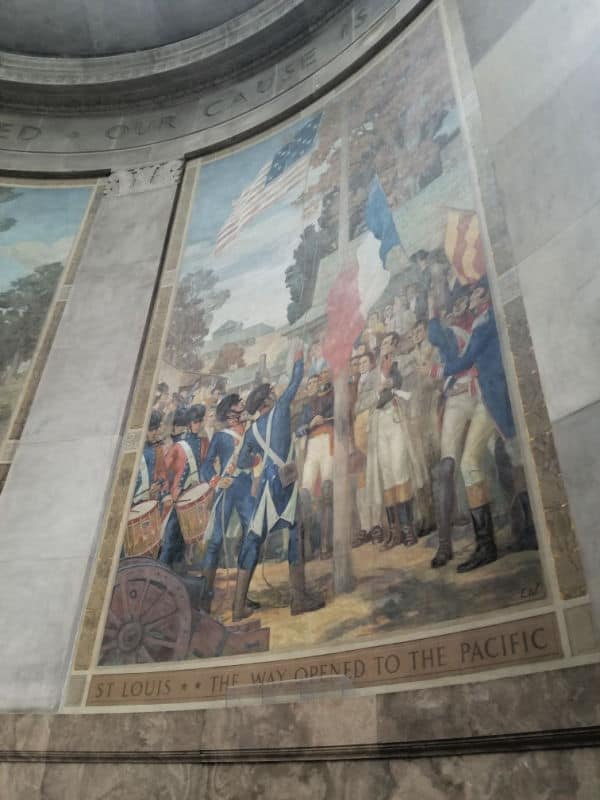 The best time to visit the park is during spring through fall depending on how you feel about hot muggy weather.

The peak time of year is September for the best weather.

Summers in Vincennes, Indiana are warm and muggy while winter is cold and snowy.

The hottest weather is from May 21 to September 23rd with an average daily temperature above 78 degrees.

The coldest weather is from December 1 to February 28th with an average daily temperature below 49 degrees.

The rainiest month is May with an average of 4.5 inches. Vincennes receives snow on average from November 30th to March 14th with January getting the most snow.

The muggiest weather is from May 18th to September 23rd with July having the most muggy days. 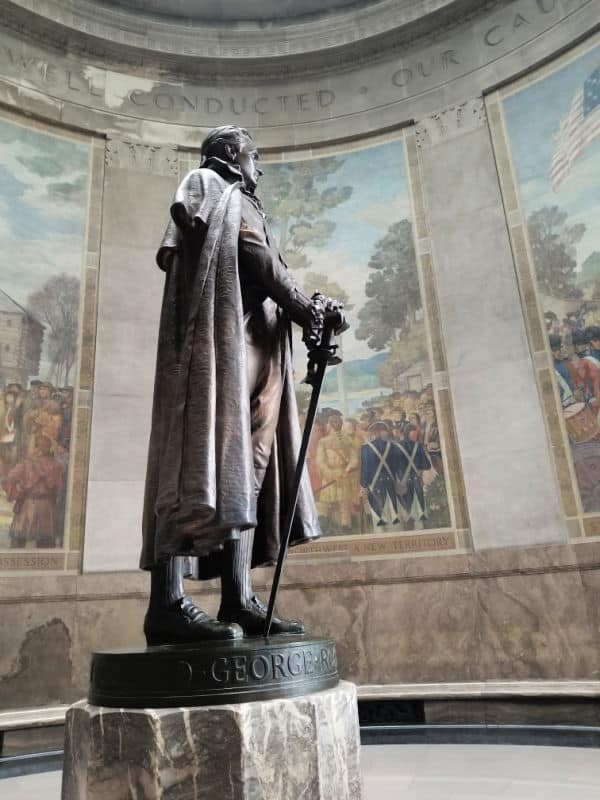 The top things to do in the park include exploring the visitor center and touring the Clark Memorial.

We suggest planning at minimum a couple of hours to explore the park. It can be done quicker if you are short on time.

The visitor center has a few interpretive displays and a bookstore. The front desk staff was great at answering questions and telling us more about the park.

Restrooms, changing stations, drinking fountains, and a bookstore are available at the Visitor Center.

The 30-minute introductory movie, "Long Knives" shares the back story of George Rogers Clark and his military campaign.

The George Rogers Clark NHP Junior Ranger program is a 2-page questionnaire that can be filled out while visiting the visitor center and the memorial.

You can't miss the George Rogers Clark Memorial when you drive towards the Wabash River.

The memorial is 80 feet high and 90 feet across at the base. The walls are two feet thick with the exterior composed of granite.

There are 16 Doric columns surrounding the memorial. Above the columns is an inscription that reads "The Conquest of the West - George Rogers Clark and The Frontiersmen of the American Revolution".

Make sure and listen to the six-minute audio program is provided in the Clark Memorial. This program will guide you through the seven murals and the story they represent.

The seven murals depicting the story of George Rogers Clark and the Old Northwest were each created on a single piece of Belgium Linen that was 16 feet by 28 feet.

Painted by Ezra Winter over 2.5 years.

You can see three of George Rogers Clark's quotes inscribed in the memorial.

The Clark Memorial has 33 steps to reach the front door with a handrail going up the center of the building.

The monument is the largest monument in the US outside of Washington DC.

Historians believe that George Rogers Clark NHP is located on the site where Fort Sackville stood.

This site was one of the greatest feats of the American Revolutionary War. When George Rogers Clark captured Fort Sackville on Feb. 25, 1779. 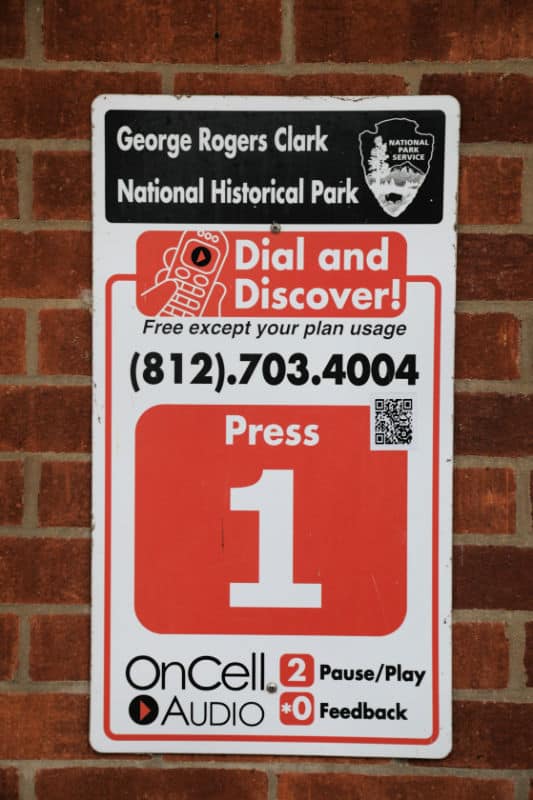 The park has a great cell phone tour to learn more about different sites in the park. Just call 812-703-4004 and press 1 to hear the 1st information.

There are no designated hiking trails within the park. Visitors can wander along the Wabash River and check out the interpretive panels about Fort Sackville and the Wabash River. 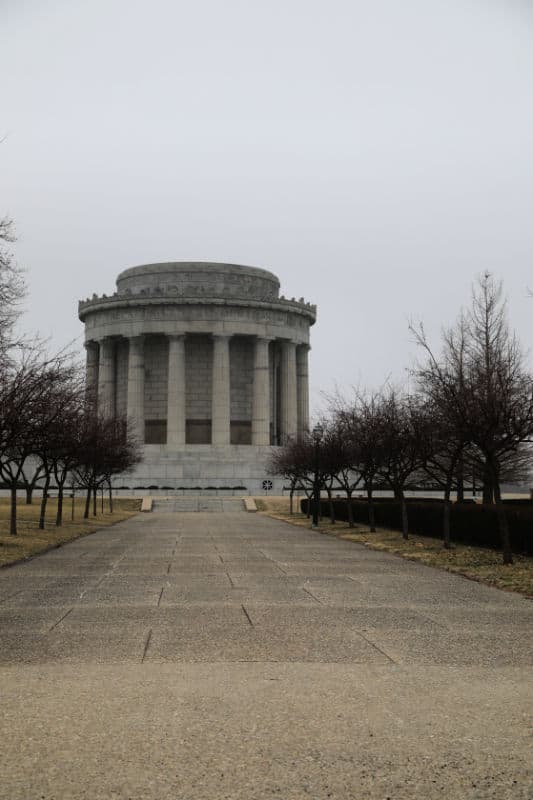 How to beat the crowds in George Rogers Clark National Historical Park?

We did not see another park visitor during our visit to the park. I wouldn't expect to run into any crowds unless you are there during a historic weapons demonstration or event.

There are no National Park Lodges within the park. Lodging is available in Vincennes, Indiana.

We stayed at the Townplace Suites in Vincennes and it was really nice.

There park does not have a designated campground. Here are a few campgrounds in the area.

This campground offers RV and Tent Sites, waterfront, fishing, and a playground.

Check out other campgrounds in the area on Campspot.

George Rogers Clark and William Croghan: A Story of the Revolution, Settlement, and Early Life at Locust Grove

George Rogers Clark: The Life and Legacy of the Revolutionary War’s Conqueror of the Old Northwest

George Rogers Clark and the War in the West 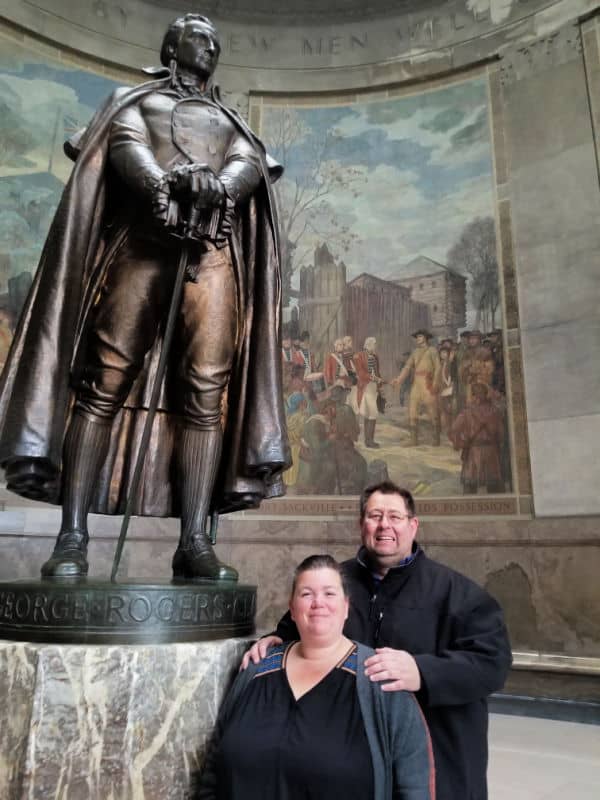 Are you heading to Ohio after you visit Indiana? Check out these great indoor water parks.