Complete Guide to Abraham Lincoln Birthplace National Historical Park in Kentucky, including things to do, history, hours, directions, and so much more. 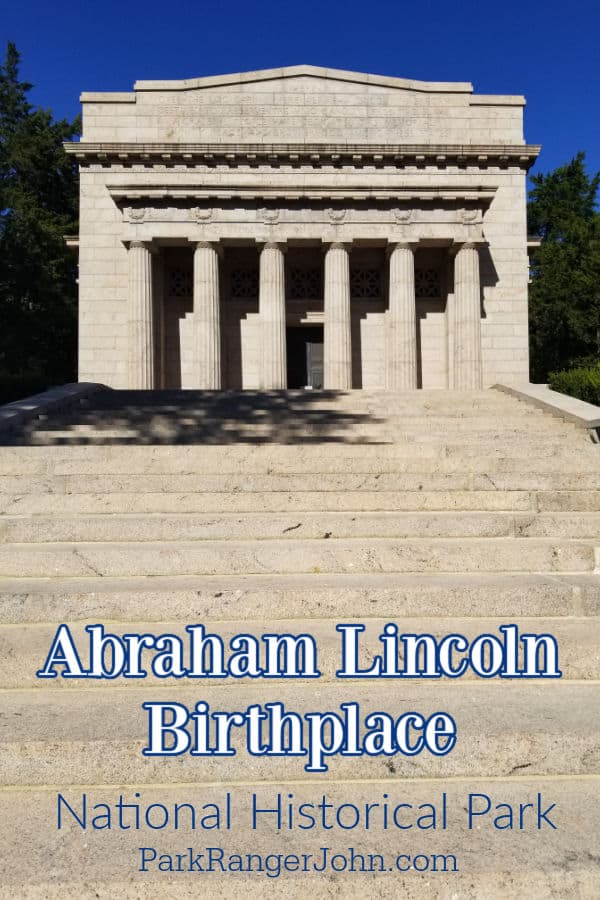 Abraham Lincoln was born in 1809 on a farm his parents had bought a few months earlier in rural Central Kentucky.

The Abraham Lincoln Birthplace National Historical Park encompasses both of these farm sites. 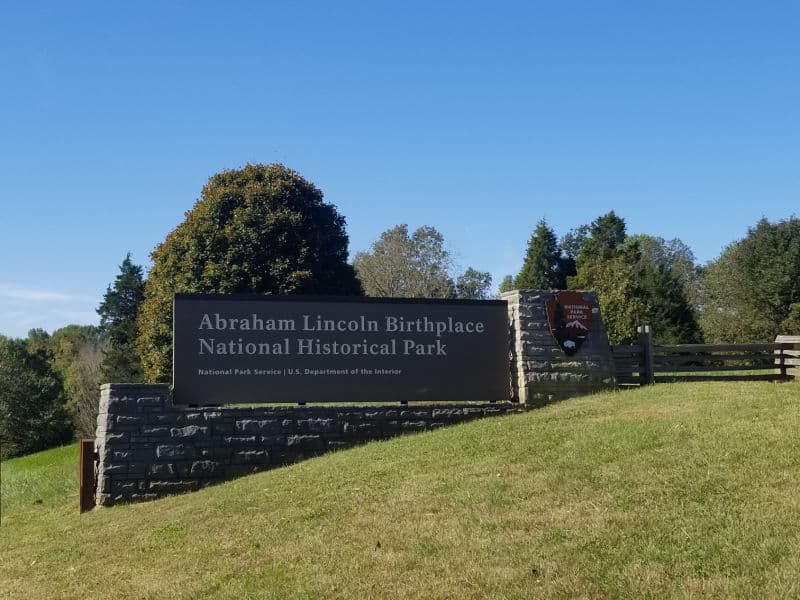 Yes, Abraham Lincoln Birthplace NHP is definitely worth visiting! A visit to this historical site gives visitors a unique and personal glimpse into the life of one of America's most beloved presidents.

The park includes several attractions that bring to life the early days of Abraham Lincoln's life. 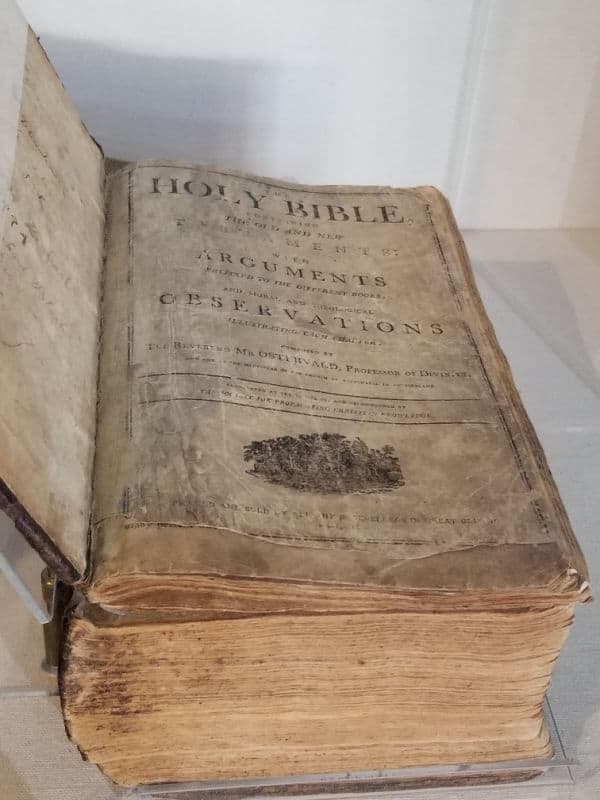 Abraham Lincoln was born in a single-story log cabin at Sinking Spring Farm on the Kentucky Frontier.

The log cabin of Abraham Lincoln did not survive through the ages. The site has a replica of the cabin housed within a memorial building.

The Early Life of Abraham Lincoln

On February 12th, 1809, Thomas and Nancy Lincoln welcomed their second child into the world. The baby, a little boy, was named Abraham. The Lincolns were not wealthy, and so Abraham Lincoln spent his early years living in poverty on the Frontier.

When the future president was two years old, his family moved from their log cabin on Sinking Spring Farm to Knob Creek Farm. The family lived on the farm for five years. Lincoln's father, Thomas Lincoln, leased or owned several farms in the Kentucky area throughout his life.

Thomas moved his family to Knob Creek farm in the hopes that he could afford to move back to Sinking Spring farm.

During the five years, the Lincolns leased Knob Creek farm Lincoln almost died when he got into difficulty swimming in a nearby creek. Nancy Lincoln, Lincoln's mother, gave birth to another child while living on the farm, who sadly did not survive.

The Lincoln family moved from the area in 1816 when Abraham Lincoln was almost eight years old. Abraham Lincoln was predominately self-educated. He was taught sporadically by traveling school teachers while in Kentucky. Lincoln learned to read despite access to proper education.

The Lincoln family left Kentucky in 1816 and moved to a homestead in Indiana. Indiana was a non-slave-owning state, which Lincoln said partly influenced the family move.

Despite growing up on farms, Lincoln was not fond of farm work. He preferred to read and write. While in Indiana, Lincoln attended school when he could. Life on the farm was extremely demanding and time-consuming, leaving little time for education.

The Lincoln family had not lived in Indiana long when Abraham Lincoln lost his mother, Nancy. Nancy died in 1818 of suspected milk sickness.

Ten years later, Lincoln lost his sister Sarah in 1828 during childbirth. Lincoln continued to live with his father until 1830.

The Lincoln family left Indiana in 1831, fearing another outbreak of milk sickness. At this time Lincoln decided to leave his father’s home. Lincoln moved to New Salem, Illinois.

Throughout his life, Lincoln was an avid reader. He decided to study law, by himself. Lincoln's dedication to bettering himself through education led him to become a successful lawyer.

Lincoln entered politics in 1836. Abraham Lincoln climbed the political ladder. Lincoln stepped away from politics when Zachary Taylor was elected as the 12th president of the United States. Instead, Lincoln returned to practicing law.

As a lawyer, Lincoln brought 175 cases in front of the Supreme Court in Illinois. During his break from politics, Lincoln earned the nickname ‘Honest Abe.’

Lincoln returned to politics when the issues surrounding slavery in America began to reach a boiling point. America was expanding, and the question arose of whether or not slavery should be allowed in these new territories.

The Kansas-Nebraska Act was passed by congress in 1854 to address the issue.

The Act brought Lincoln back into the world of politics. Lincoln openly shared his thoughts on slavery and his support for the abolitionist movement. He joined the newly formed Republican party in 1856.

Although Lincoln had begun his life living in poverty on the Kentucky Frontier, he worked hard to become America’s 16th president.

When Lincoln was elected president, America erupted into a bloody Civil War that lasted for four years. The southern states felt Abraham Lincoln and his abolitionist Republican Party threatened the Southern economy and way of life.

Lincoln fought successfully to end slavery in America, and preserved the Union of the United States of America in the process. 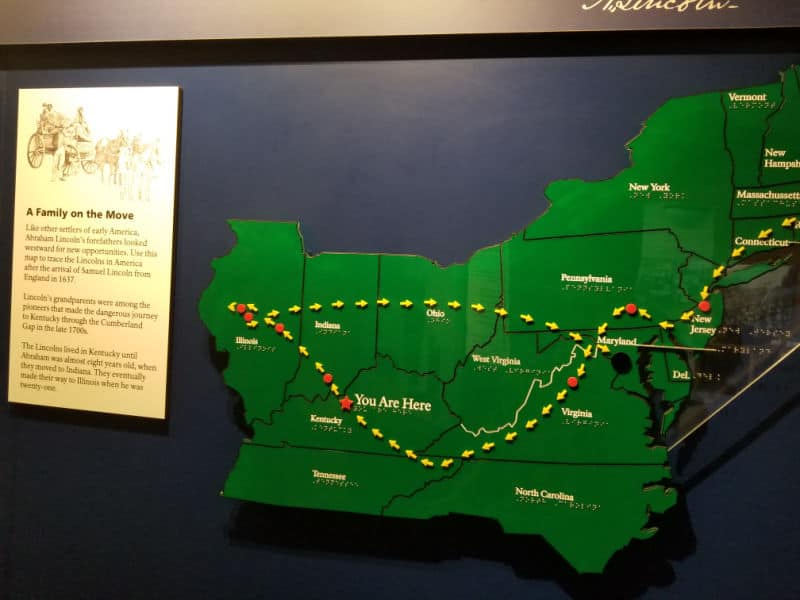 Things to know before your visit to Abraham Lincoln Birthplace NHP

The site is located in the Eastern Time Zone

Pets are allowed on trails but must be on a leash not over six feet in length.

Depending on the cellular provider and network availability, cellular reception will vary in the park.

The park is open from Monday to Sunday at 9 AM to 5 PM. The Memorial Building closes at 4:30 PM.

Public Wi-Fi is available. Visitors may access the park's Wi-Fi at the Visitor Center and Memorial Building.

Mosquitoes, ticks, and poison ivy are common from mid-spring through mid-fall.

There is a large parking lot in front of the Memorial Building, right outside the visitor center.

There are currently 25 electric vehicle (EV) charging stations within a 50-mile radius of the center of Hodgenville, KY. The nearest from the park is located in Lincoln Lodge, half a mile from the park main entrance. 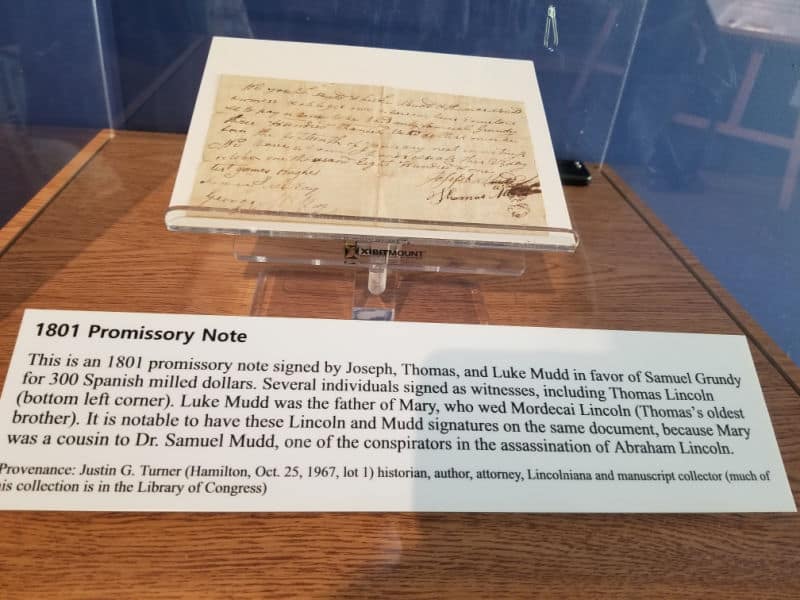 The Birthplace Unit is located approximately 3 miles south of Hodgenville, Kentucky on U.S. 31E and KY 61.

The Boyhood Home Unit at Knob Creek is located 8 miles north of Hodgenville along U.S. 31E. 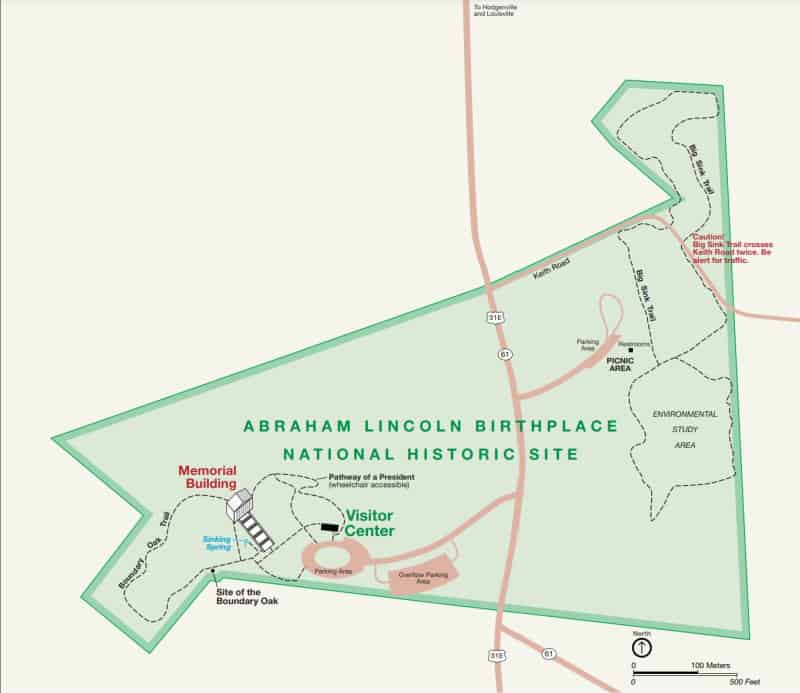 Where is Abraham Lincoln Birthplace NHP?

The Birthplace Unit of the park is located approximately 2 miles south of the town of Hodgenville on U.S. Highway 31E South.

The Boyhood Home Unit at Knob Creek is located approximately 10 miles northeast of the Birthplace Unit of the park.

Estimated Distance from nearby National Parks

The Visitor Center can be found near the Memorial Building, just a few steps from the museum. 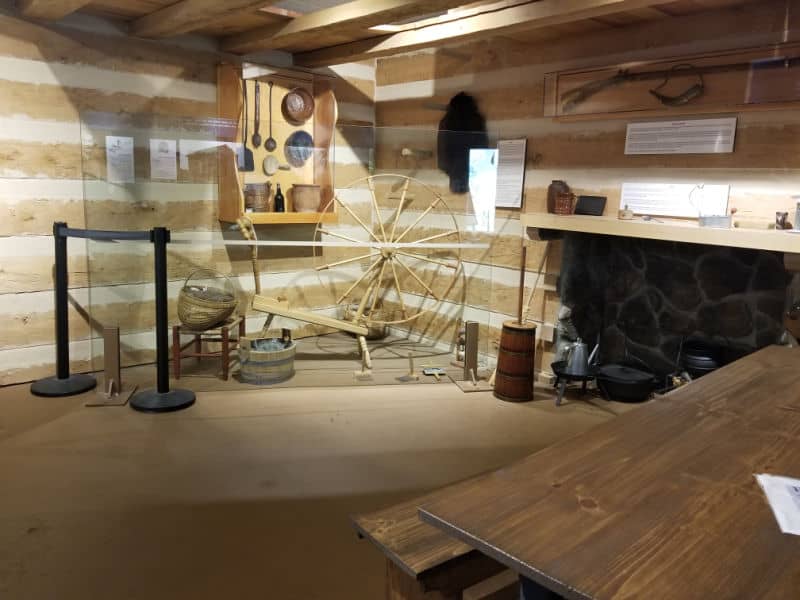 Getting to Abraham Lincoln Birthplace NHP

From the North: Take Interstate 65 South to Exit 91 (Elizabethtown). Follow KY 61 (Lincoln Parkway) 13 miles south to US 31E. Take US 31E south 1.3 miles to the park; picnic entrance on left and main entrance on right.

From Boyhood Home Unit at Knob Creek: Turn right onto US 31E. Proceed southwest for approximately 10 miles; picnic entrance on left and main entrance on right. 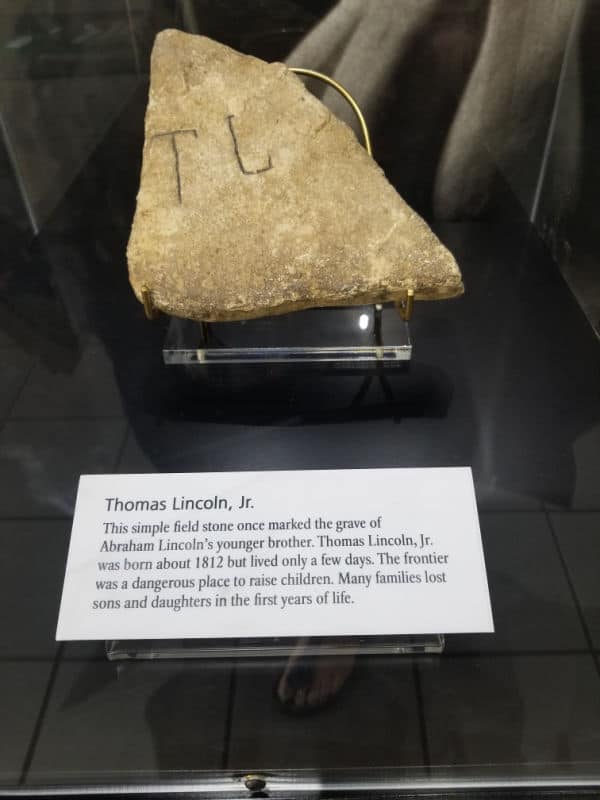 The best time to visit Abraham Lincoln Birthplace National Historical Park is during the spring and early summer months when the park is alive with blooming wildflowers and awe-inspiring views of the rolling hills of Kentucky. During this time, temperatures are moderate and ideal for outdoor exploration.

The hot season begins from May 25 to September 21, with an average daily high temperature above 78 degrees.

The cold season begins from November 29 to February 28, with an average daily high temperature below 51 degrees.

The snowiest season begins from November 27 to March 19, with a snowfall of at least an inch a month. The most snow occurs in February, with an average of 3.8 inches. 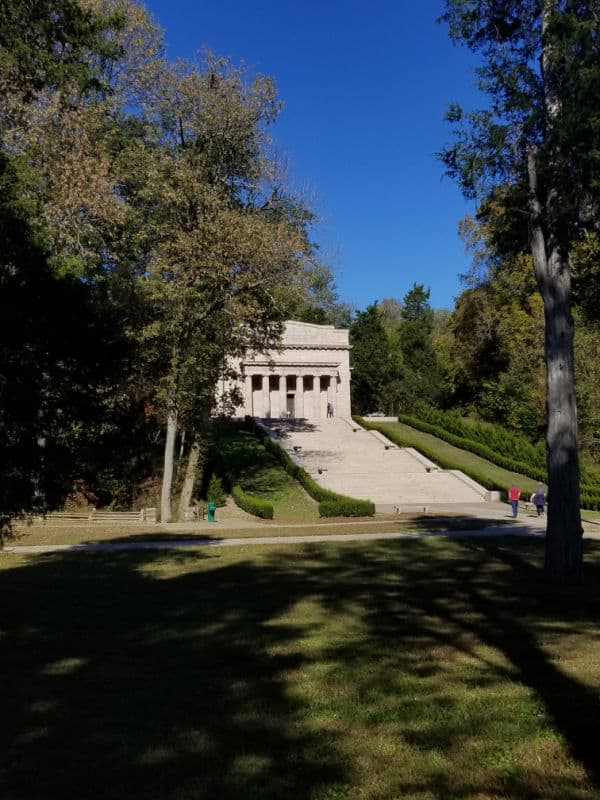 Best Things to do at Abraham Lincoln Birthplace NHP

We suggest planning at minimum a couple of hours to explore the park.

The visitor center has a small museum with exhibits detailing the early years of Abraham Lincoln's Life.

One of the coolest exhibits is the Lincoln Family Bible from 1799. This is the Bible that Abraham Lincoln recorded his own birthday and important dates for his family.

The park movie Abraham Lincoln: The Kentucky Years is a 15 minute captioned film that is played every 30 minutes on the hour and half hour 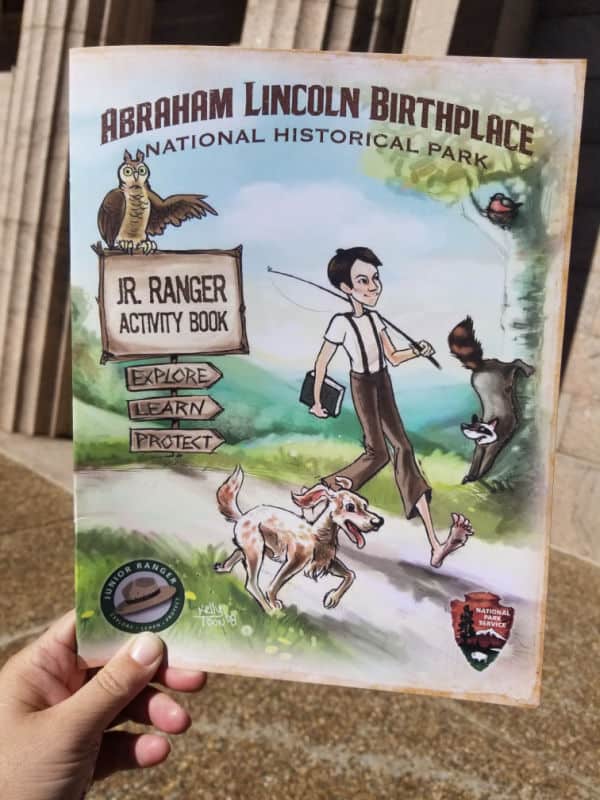 The Junior Ranger program is broken down by age groups. Depending on the age of the participant you need to complete specific pages in the booklet.

The Birthplace Unit includes 116 acres of the Lincoln family's Sinking Spring Farm.  The early 19th century Kentucky log cabin is enshrined inside the neoclassical Memorial Building at the site of his birth.

The visitor center is located at the birthplace unit of the park.

There is an accessible path from the visitor center to the top of the memorial if you do not want to walk up the stairs.

The Lincoln family lived on 30 rented acres of the Knob Creek Farm from the time Abraham was two until he was seven years old when the family left for Indiana. 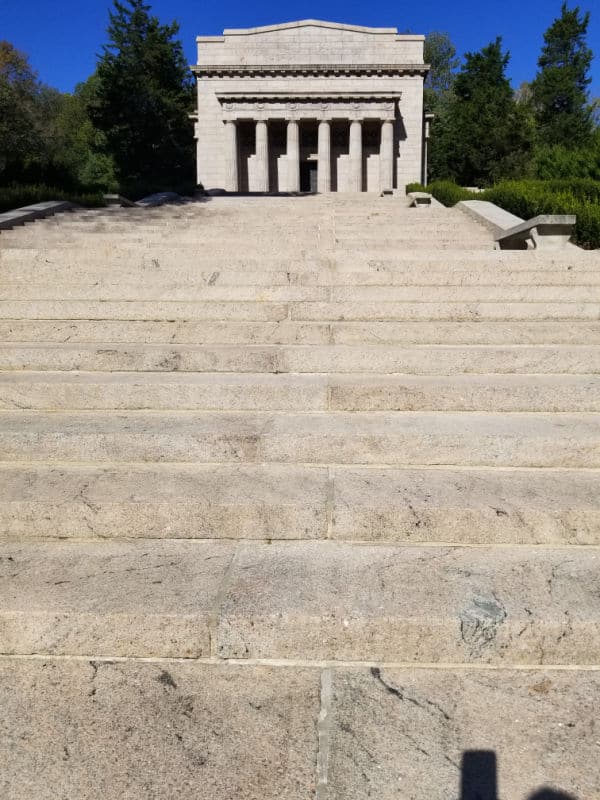 Big Sink Trail is one mile long and located in the picnic area on the east side of US 31E.

How to beat the crowds in Abraham Lincoln Birthplace NHP?

We did not experience any crowds during our visit to the park. The only area that could feel crowded would be exploring the birthplace memorial and walking around the log cabin. 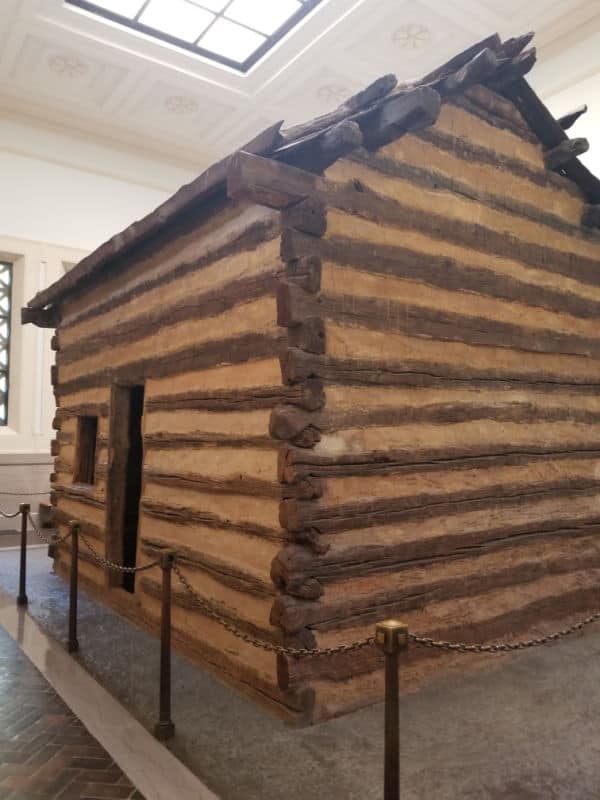 Fairfield Inn & Suites by Marriott Elizabethtown - take advantage of free continental breakfast, dry cleaning/laundry services, and a fireplace in the lobby. Stay connected with free in-room Wi-Fi, and guests can find other amenities such as a gym and a business center.

Holiday Inn Express and Suites -Elizabethtown North - take advantage of free full breakfast, a terrace, and dry cleaning/laundry services. Stay connected with free in-room Wi-Fi, and guests can find other amenities such as a 24-hour gym and a business center.

Click on the map below to see current lodging and vacation rentals near the park.

There are no National Park Campgrounds 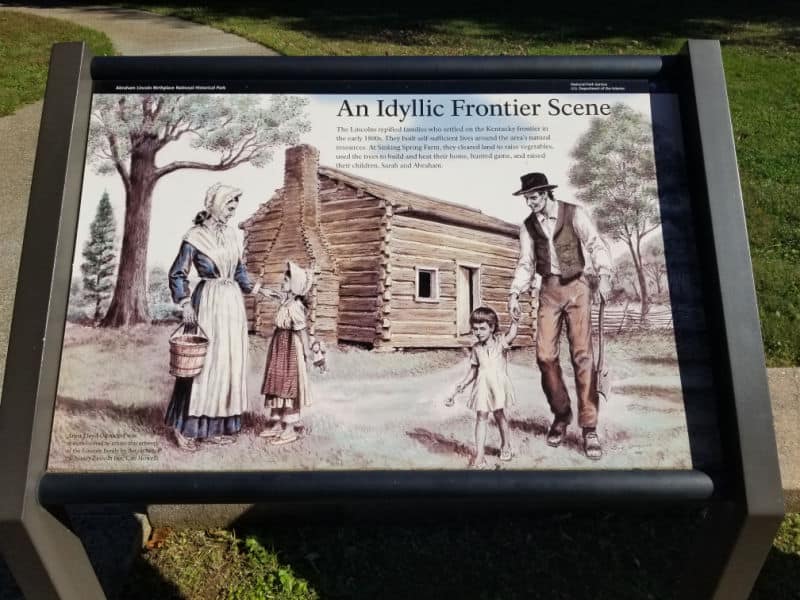 Abraham Lincoln was the 16th president of the United States. These sites preserve not only places of his early life but also the work he did during the civil war. 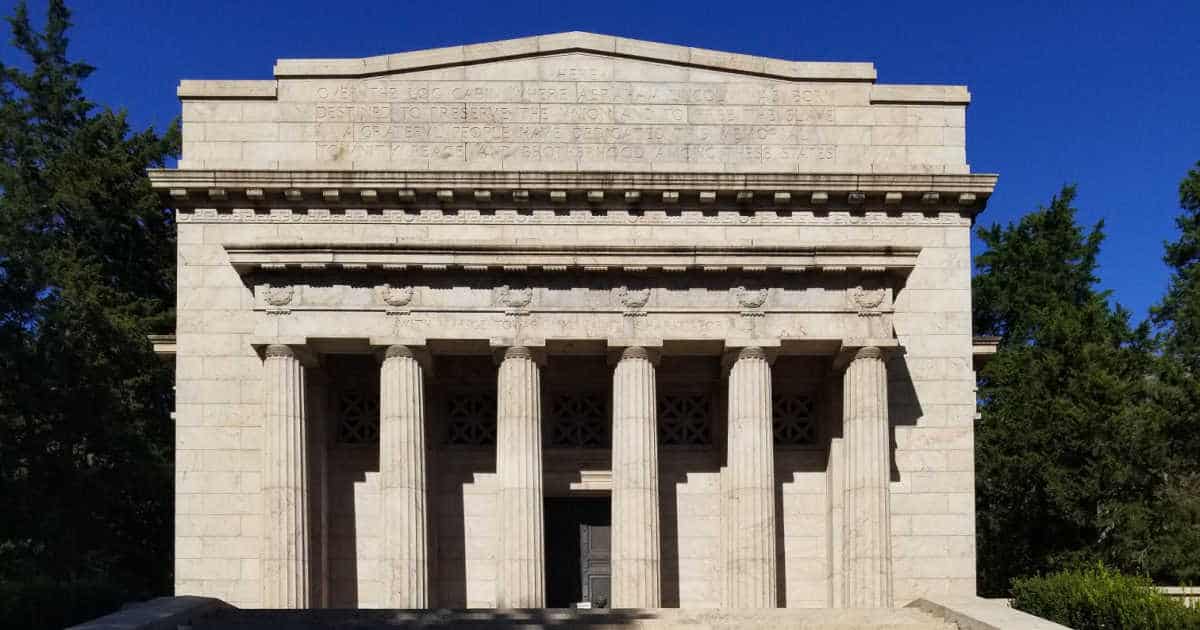