Complete guide to Castillo de San Marcos National Monument in St. Augustine, Florida including things to do, history, parking, nearby lodging and camping, and so much more. 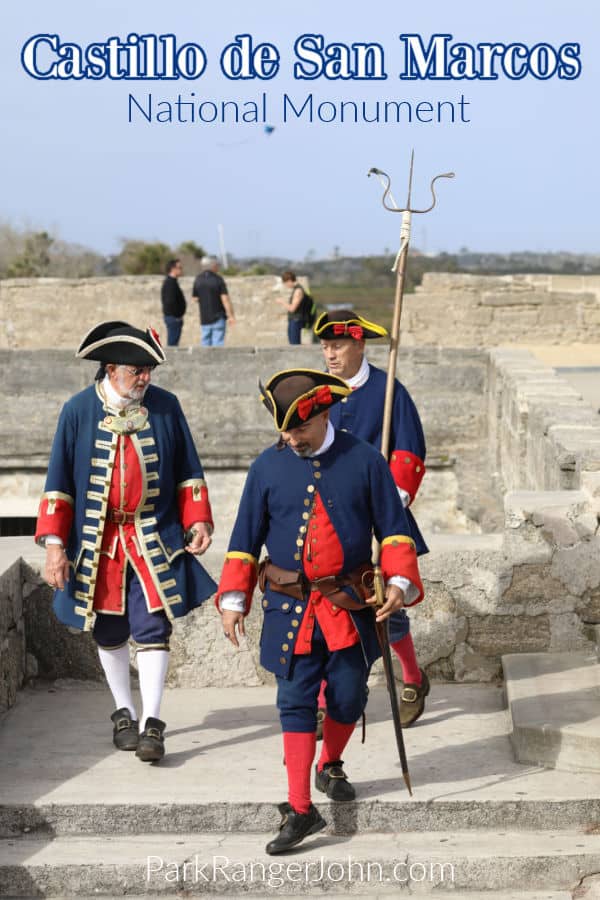 The Castillo (castle) has had quite a history including withstanding bombardments during the period of time when Spain and England warred for possession of the region. 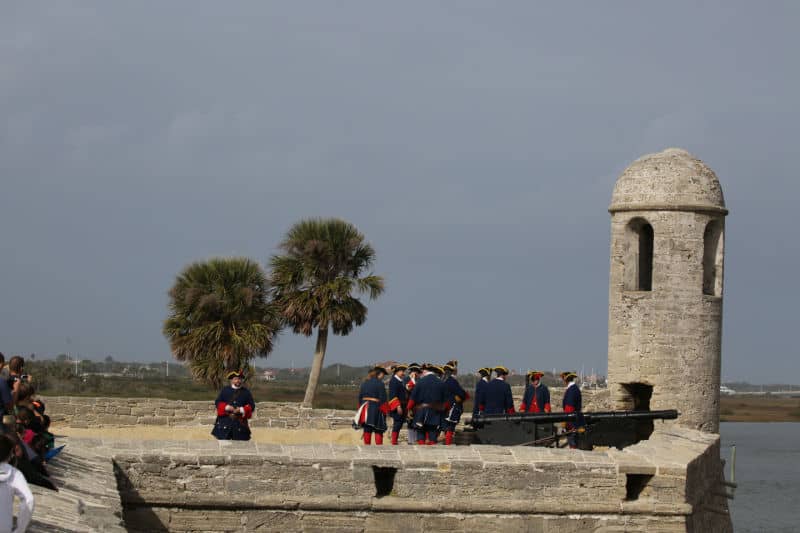 The Castillo was built with coquina which is a mixture of broken shells and sand used to build the masonry fortification. This mixture is bound by calcium carbonate and becomes a compressible material.

This compressibility has allowed the Castillo to absorb the impact of cannonballs instead of having the walls shatter.

One thing to know is Castillo de San Marcos NM is located in the heart of St. Augustine, Florida. The park can be incredibly busy!!!

Parking can be a total pain and you may end up needing to walk a while to get from a parking spot back to the park.

Be prepared for Florida weather, sunshine, and make sure you have shoes on that are comfortable.

Yes! The historic weapons demonstrations is one of the most amazing experiences we have seen in a National Park. 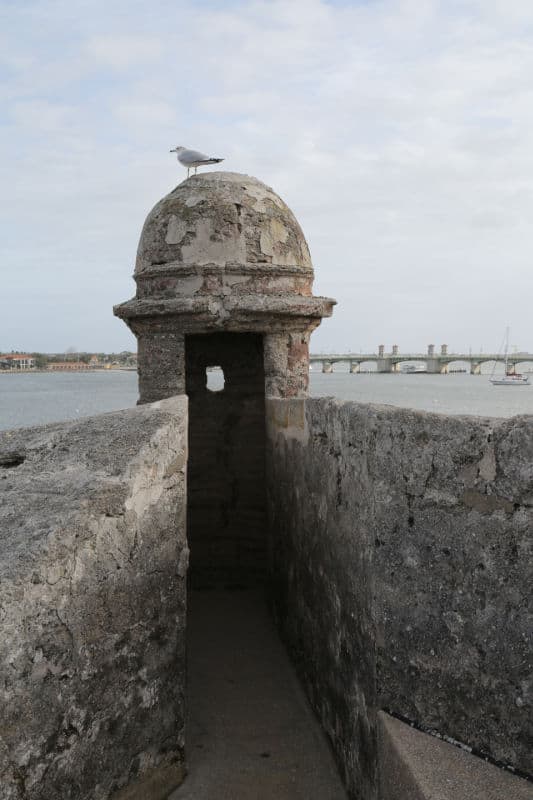 In 1565, a Spanish soldier named Pedro Menendéz de Avilés made St. Augustine his home.  The spot is named as such because Menendéz first spotted it on the feast day of St. Augustine.

Menendéz’s primary goal when first coming to the area was to wipe out French explorers who were determined to stake claim to Spanish land.

The French had already established a site at Fort Caroline.  Menendéz and Spanish empire forces eventually annihilated the Protestant French as the Catholic Spanish Emperor had instructed Menendéz to do.

Fort Caroline was destroyed and the St. Augustine Spanish became the power force in Florida.

Because of the English’s British forces advancing movements towards the Spanish and because Charles Town was a short sail from St. Augustine the Spanish decided they needed a fort.

In 1668, an English privateer raided St. Augustine, ravishing the town and nearly destroying the wooden fort that was in place.

The name coquina means “small shells.”  It took years to complete the project and by 1695, the core of the fort was finally completed.  St. Augustine had a number of escaped slaves from Charles Town residing there.

The Spanish were willing to help and employ the slaves if they converted to Catholicism.  With the help of these African Americans, and Native Americans from the nearby missions, the Spanish built Castillo de San Marcos.

The masonry star fort is the oldest of its kind still existing in the United States.  Masonry refers to a structure that is built by individual units bound together.

A “star fort” was innovative during the time when the canon was the top strategy in battle.  These forts were designed with bastions at the corner of each wall.

These spots protected “dead zones” of the fort and allowed firing to happen from positions protected from direct fire.

Each bastion at the Castillo had a name – San Pedro, San Agustin, San Carlos, and San Pablo.  The fort was surrounded by a moat which was kept dry, but could be flooded by seawater in a hurry if needed.

The two century time period of 1700-1900 held the most comprehensive changes to America and created the country it is today.

These changes affected the Castillo between 1702 and 1821.  The fort was tested in 1702, during what was referred to as Queen Anne’s War.

The English intended to capture St. Augustine.  Approximately 1,500 citizens were holed in the fort for over two months.  The coquina structure proved strong as cannonballs could not puncture it.

Spanish troops from Cuba arrived to assist and in the end, the town of St. Augustine was destroyed.  The fort however, remained intact.

Over the next 25 years, modifications were made and features were added.  In 1740, the British attempted to destroy the Castillo.

Once again, townspeople and soldiers were barricaded in the fort, this time for 27 days.  When the British realized their cannons were no match for the coquina walls, they were forced to retreat.

In 1763, after the Treaty of Paris was signed, the British took control of St. Augustine.  They renamed the fort St. Mark.

By the end of the Revolutionary War, a set of treaties in 1783 transferred the fort back to Spain and the Spanish returned back to St. Augustine.

The U.S. renamed the fort Fort Marion after Revolutionary War hero Francis Marion.  Fort Marion was involved in the Seminole Wars and even imprisoned famed Seminole chief Osceola in 1837.

During the Civil War, most of the artillery and equipment kept at For Marion was moved to more strategic forts in the south by the Confederacy.

By 1862, the city and the fort were surrendered to Union forces.

During the 1870s, the fort was mainly used as a location to keep Native American prisoners during wars in the West.

During 1886-1887, nearly 500 Apaches were held prisoner here, most being women and children, among them were members of Geronimo’s tribe, including his wife.

By 1898, deserters of the Spanish-American war were kept prisoner at the fort.

This act of military service is the last recorded use of the fort which at that time had been established for over 200 years and had been under the direction of multiple countries.

In 1924 the fort was designated as a National Monument and in 1942, Congress reinstated the historical name of Castillo de San Marcos.

The walls of the Castillo, which still stand today, are a remembrance of the Latino and other cultures’ determination in staking a claim in the New World. 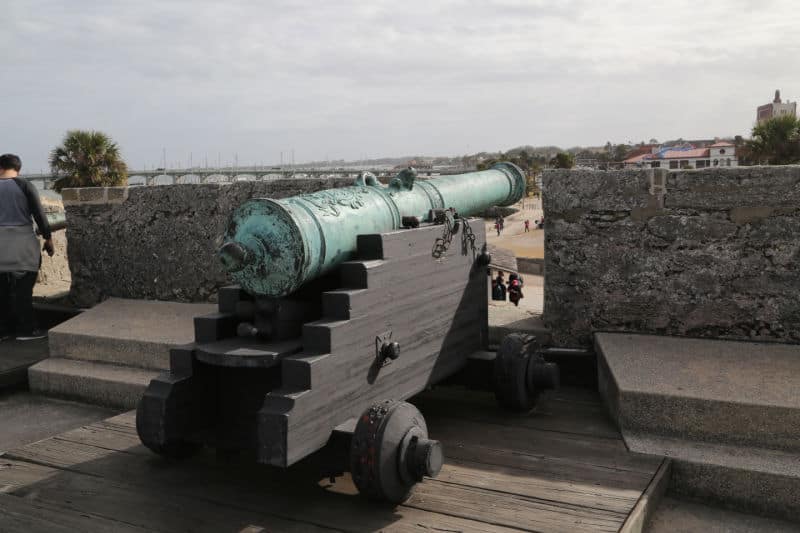 Valid for one year through the month of purchase. Admits one private, non-commercial vehicle or its pass holder.

Pets are not allowed inside the structure of the Castillo de San Marcos.  Pets must be kept on a leash at all times on the outside sections of the park.

We had great cell service while in St. Augustine, Florida.

The park grounds are closed from midnight until 5:30 am.

Public WiFi is not available at the Castillo.

Long-term (all day) parking is available for a fee in the city of St. Augustine parking garage just behind the Visitor Information Center which is located on the corner of West Castillo and South Castillo Drives, across from the Castillo headquarters building.

Parking in St. Augustine can be a bit of a mess. I had to walk 20 to 30 minutes from the parking spot I was able to find to the park

Larger vehicles can be parked at the corner of West Castillo Drive and Riberia Street.  This lot is 3 blocks from the Castillo.

There are no restaurants within the park. If you are looking for a place to eat while visiting check out these restaurants in St. Augustine

There are currently 23 EV Charging Stations within 10 miles of Saint Augustine, Florida. 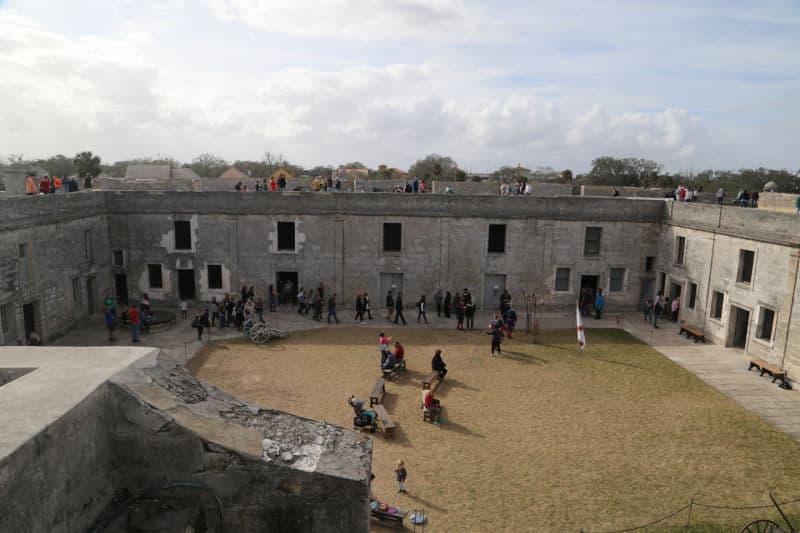 Check out how this US National Monument compares to other National Parks by Size.

Dedicated as a National Monument in 1924 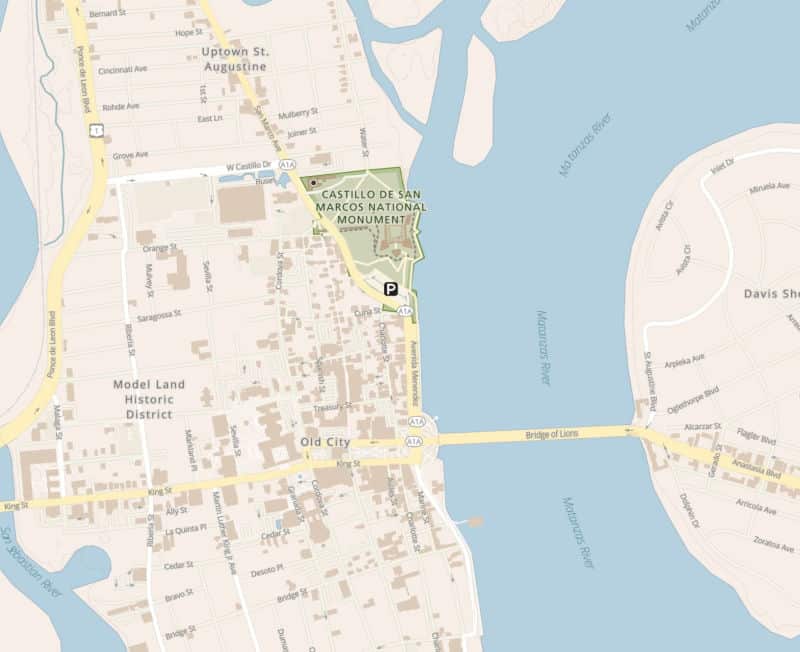 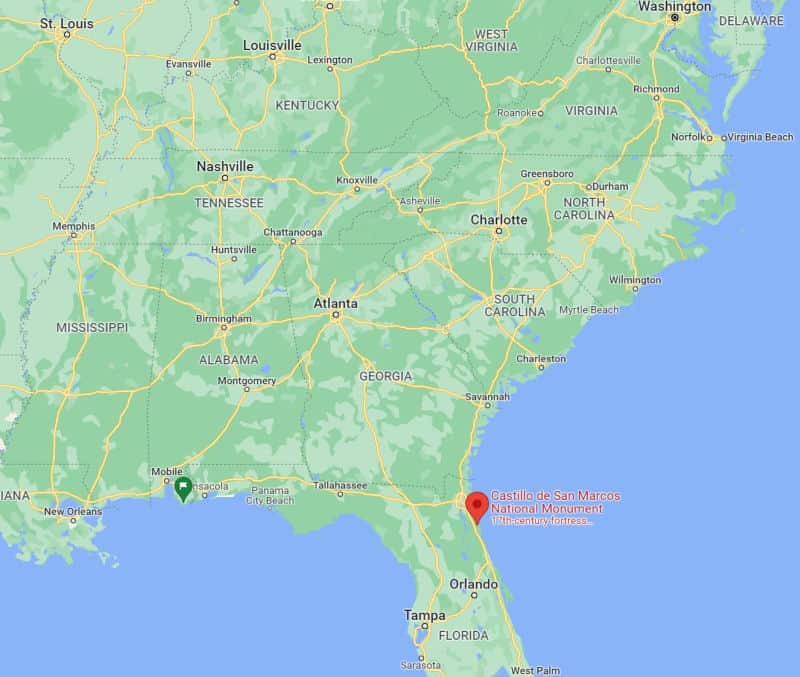 There is no visitor center for the park. The park is primarily an outdoor park. 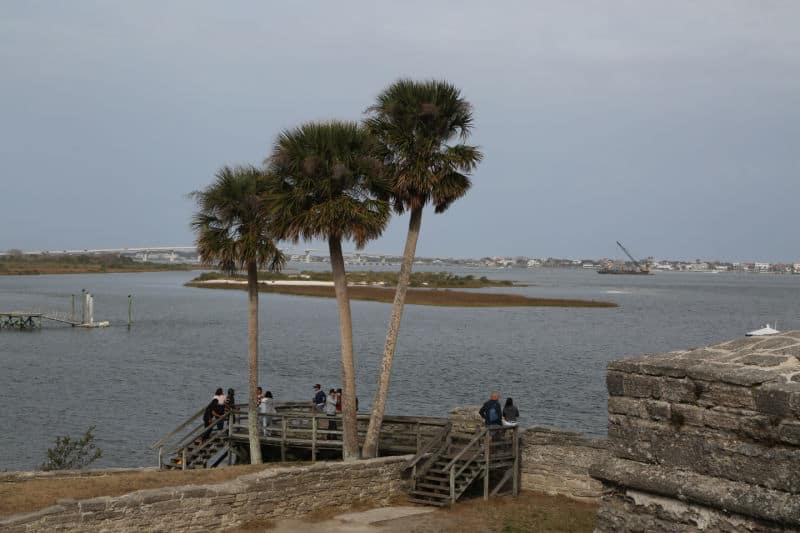 Take the exit for St. Augustine Historic Sites and Downtown (State Road 16, Exit 318). Follow 16 to US 1; turn right and follow US 1 for approximately one mile to West Castillo Drive.

Turn left and follow West Castillo to the traffic light at San Marco Avenue. Turn right at the light, and the Castillo and parking lot are ahead on the left.

The Castillo is located on A1A in downtown St. Augustine. 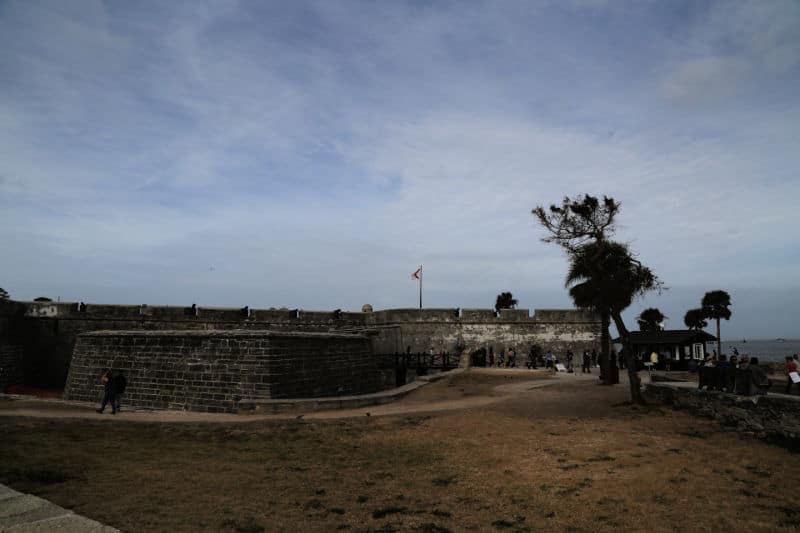 The best time to visit the park to escape the crowds and heat of the summer is from mid-September to mid-November.

The hottest weather is from May 29th to September 23rd with an average daily temperature above 85 degrees.

The coldest weather is from December 5th to March 5th with an average daily temperature below 71 degrees.

The rainiest month is September with an average of 5.4 inches. 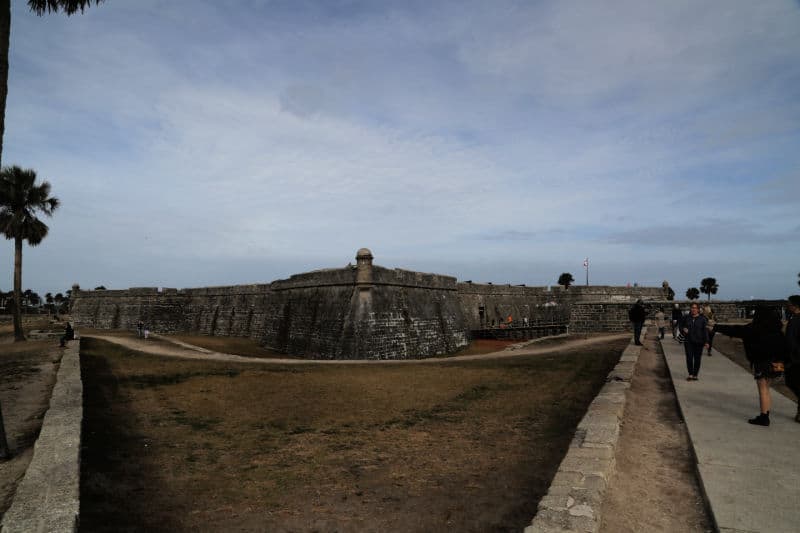 We suggest planning at minimum a few hours to explore the park and find parking.

Watch a demonstration of the weapons and hear about the experiences of the colonial Spanish soldier of 1740s St. Augustine.

You will want to give at least an hour to complete the Junior Ranger booklet. You can find the answers by watching the park video, checking out the park brochure, and exploring the fort.

Explore the forts casements and exhibits while soaking in the views.

2 day history tour - If you want to learn more about the history of St. Augustine check out this history tour.

Check out all of the epic St. Augustine Tours on Viator. 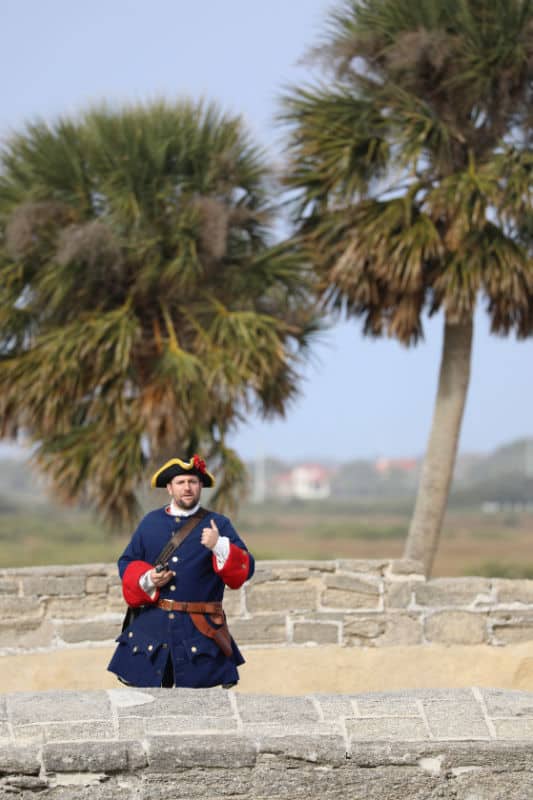 There is no real hiking at the fort but we want to remind you to bring water, sunscreen, and a hat with you!

Walking outside on the grounds of the park can get super hot!

How to beat the crowds in Castillo de San Marcos National Monument?

The best months to visit for low crowd levels is mid-September through mid-November. The park is incredibly busy from Christmas to New Years, during spring break, and winter breaks.

A busy Saturday can average over 3,500 visitors at the park. Visiting mid-week during the off-season is your best way to beat the crowds.

There is a ton of different lodging and vacation rentals in St. Augustine.

St George Inn - This hotel is a 2 minutes' walk from the iconic Castillo De San Marcos.

For additional lodging options click on the map below to see rates for hotels and vacation rentals in the area.

There are no National Park Campgrounds within the park. There is camping available nearby including:

This campground offers lodging and RV sites, a pool, hiking, and more.

This campground offers lodging, rv and tent sites, waterfront, a pool, and more. 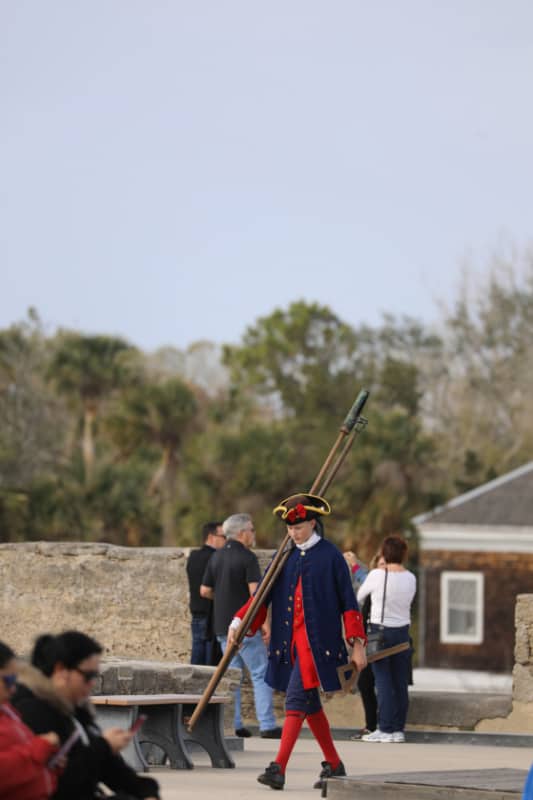 Check out all of the amazing things to do in St. Augustine with kids!

Check out these great hotels in St. Augustine