Epic Guide to Minuteman Missile National Historic Site in South Dakota including things to do, history, the Junior Ranger program, and so much more. 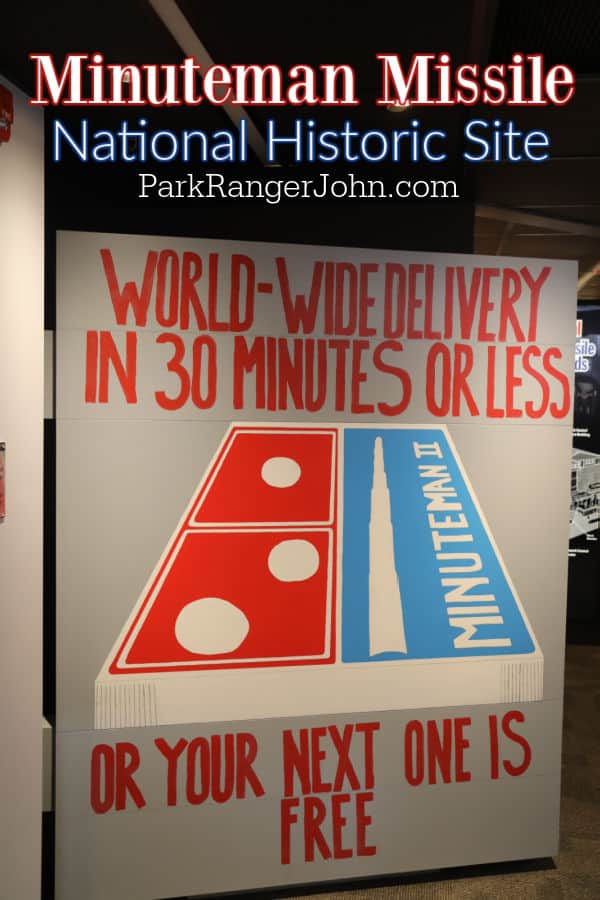 Its mission is to tell the story of the Minuteman Missiles, nuclear deterrence, and the cold war.

The main visitor center is right off exit 131 on Interstate 90 and anyone traveling this area should take the time to check it out. 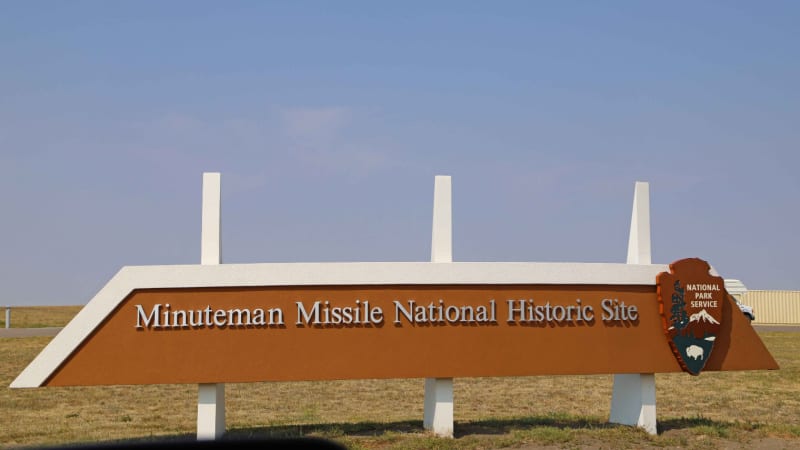 Yes! The park has one of the most impressive visitor centers and exhibits we have seen in over 275 parks.

Plus, where else are you going to see a missile right off of the interstate. 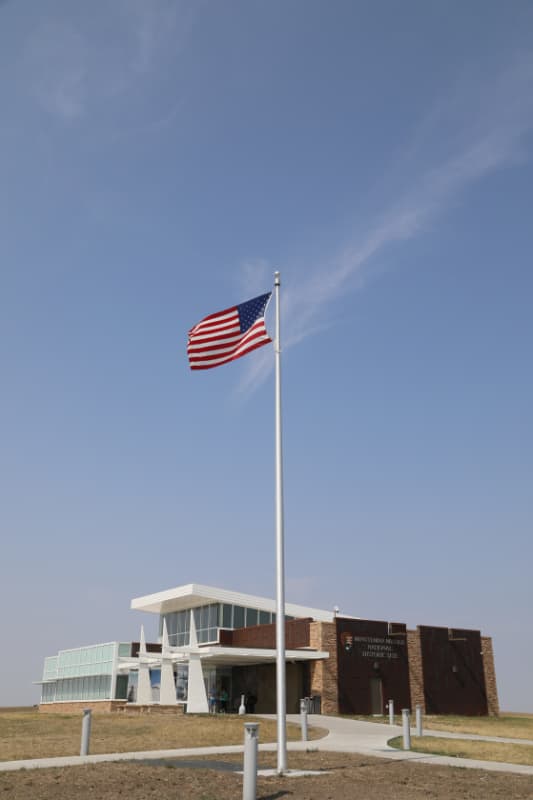 This site protects two facilities that were located in western South Dakota from the 1960s to the 1990s.

It was not so much the satellite that concerned the U.S. but the fact that the satellite was able to be propelled into space by a missile that was capable of launching to a target thousands of miles away.

Sputnik spurred the research and ultimately the development of Minutemen Missiles.

In 1954, President Eisenhower stated: “American freedom is threatened so long as the Communist conspiracy exists in its present scope, power, and hostility...We will not be aggressors, but we have and will maintain a massive capability to strike back.”

By 1958, Congress had increased funds for the Minuteman project from $50 million to $140 million.

During the Cold War, Minuteman Missiles were a major part of the defense and protection of the U.S.

With this number of missiles, the Air Force was confident that there would be ample opportunities to destroy any Soviet aggressor as soon as possible.

The Rapid City Journal described how a Minuteman silo was built:

“Conventional earthmoving equipment scoops an open cut 12 feet deep.  A backhoe perclies on the edge of a large hole in this cut and digs a hole 20 feet deeper.

The remaining 52 feet of depth is ‘mined” by a clamshell…When each hole is at the full depth of 84 feet, a steel ‘can’ 12 feet in diameter is carefully positioned in it.  Reinforced concrete is poured between the can and earth.”

During the Cold War, there were six Minuteman Missile fields located in the states of Montana, North Dakota, Wyoming, South Dakota, and Missouri.

The site spans a 15-mile stretch along South Dakota Interstate 90.

One of the most important roles during the Cold War was to work as part of a missile crew with the ability to make the decisions and officially initiate these nuclear missiles if needed.

It was very important to have abundant maintenance and security personnel at these locations as well.

This site required cooperation from many sections in the area; crews had to be at the site 24/7, 365 days a year.  Crew members lived and worked close to the facility.

This meant landowners nearby and local towns were part of the initiative to keep America safe during these times.

It was certainly evident to them that living near these facilities added an extra layer of apprehension, feeling their world could change at any moment.

As we know, the Soviet Union eventually collapsed, but not before many close calls and rising tensions over 30 years.

This site is one of only a few that were preserved to educate the public about this time period and the technology and crew that was necessary to keep operations intact.

The reason it was chosen to be preserved was its proximity to Interstate 90 as well as landmarks such as the Badlands and the Black Hills.

The site has also had limited modifications done since it was built in the 1960s.

The silo, Delta-09, was constructed in 1963 and occupies 1.6 acres.  The launch tube is underground and today, there is an unarmed missile there for display.

Modifications have been made to the underground location so visitors are able to see the missile and also to permit foreign satellites to verify that the missile is not operational and poses no threat.

The launch facility was built nearby and occupies nearly six acres.  The above-ground buildings were used to house employees and contained sleeping areas, offices, and emergency equipment.

Outside the hustle and bustle of South Dakota attractions such as Mt. Rushmore, the Badlands, and the historic town of Wall, South Dakota itself, the Minuteman Missile National Historic Site sits among the quiet plains and educates visitors on one of the most historic events in both American and World history. 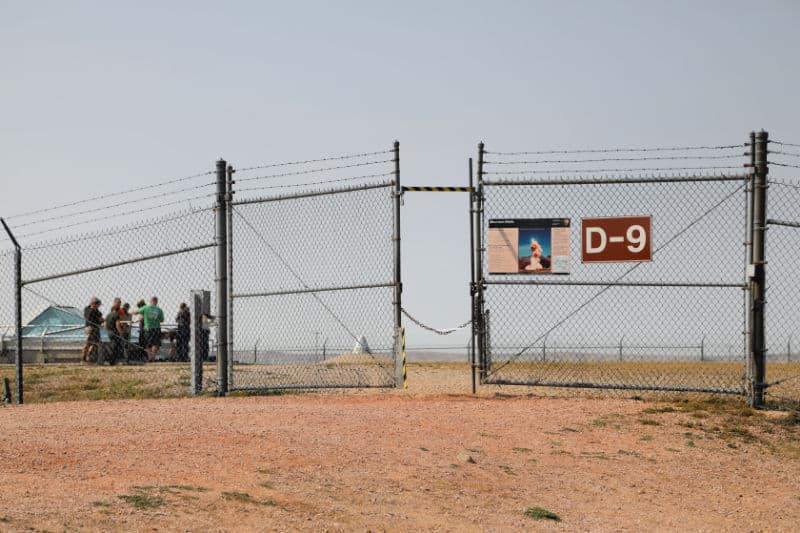 There is a tour fee for the Delta-01 tour.

It is worth noting that South Dakota has two time zones. The western part of the state is Mountain Time and the eastern part is in the Central Time Zone.

Pets must be on a leash less than 6 feet in length.

Cell service should be good while at the park.

The visitor center is open from 8 am to 4 pm.

Public WiFi is available at the park visitor center.

There is a large parking lot in front of the visitor center.

Minuteman Missile NHS is part of the 2018 Passport Stamp Set

There are no EV Charging stations in Phillips, South Dakota.

There are 45 public EV Charging stations in South Dakota. 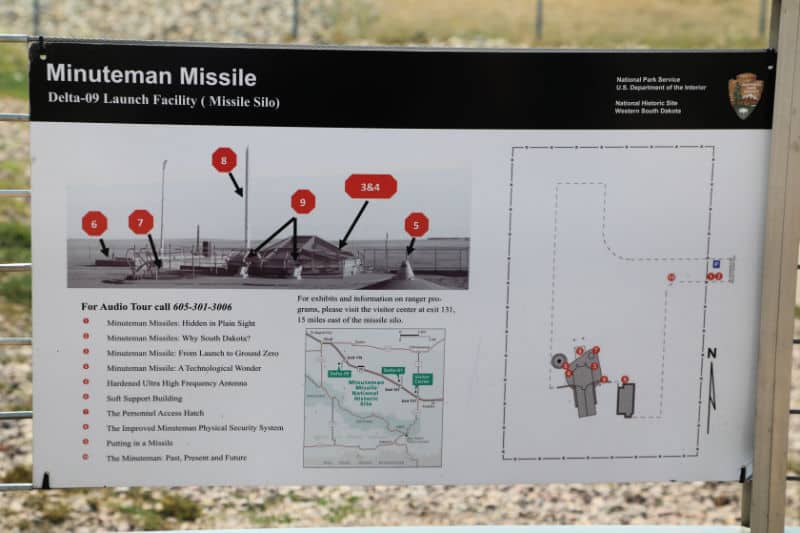 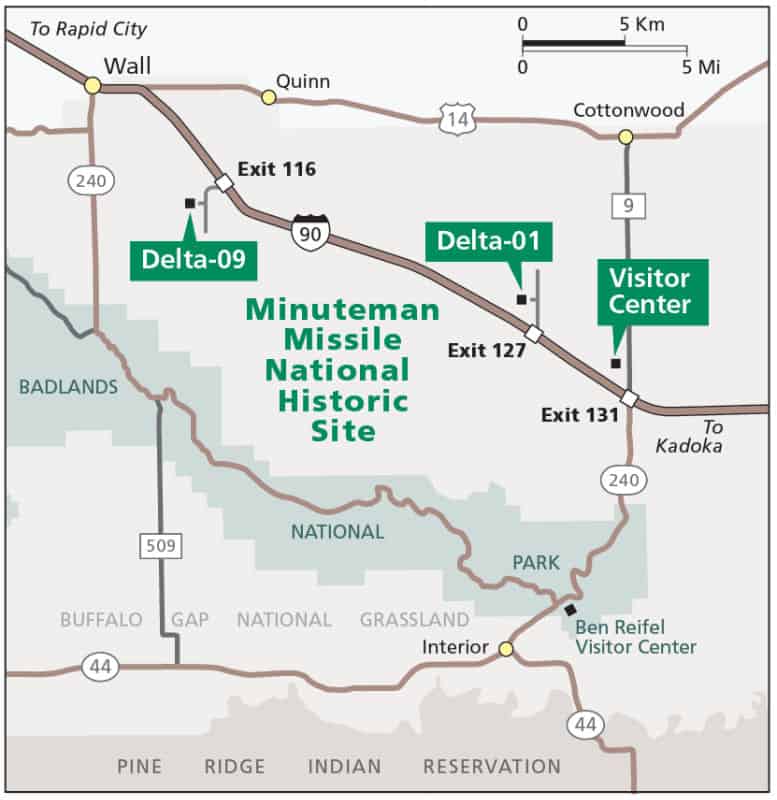 Minuteman Missile NHS is located in western South Dakota right off of I-90.

The visitor center is located directly off of I-90 at exit 131. 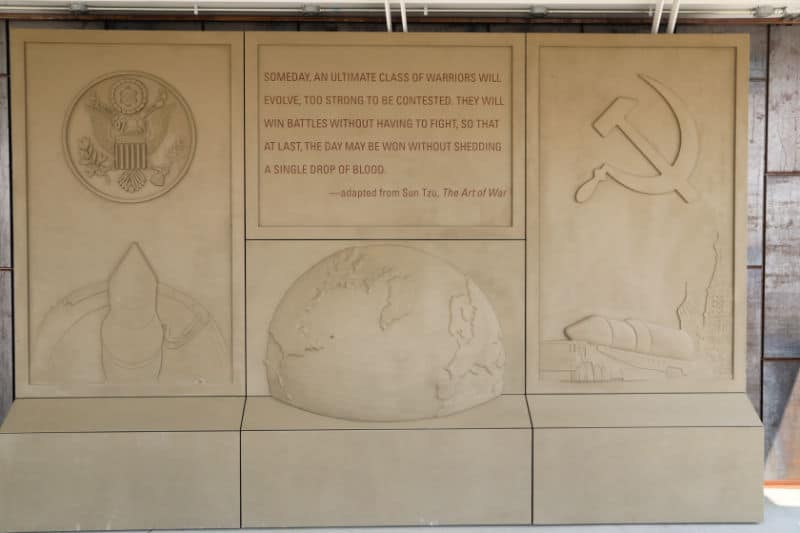 The Visitor Center is located immediately north of I-90, exit 131. 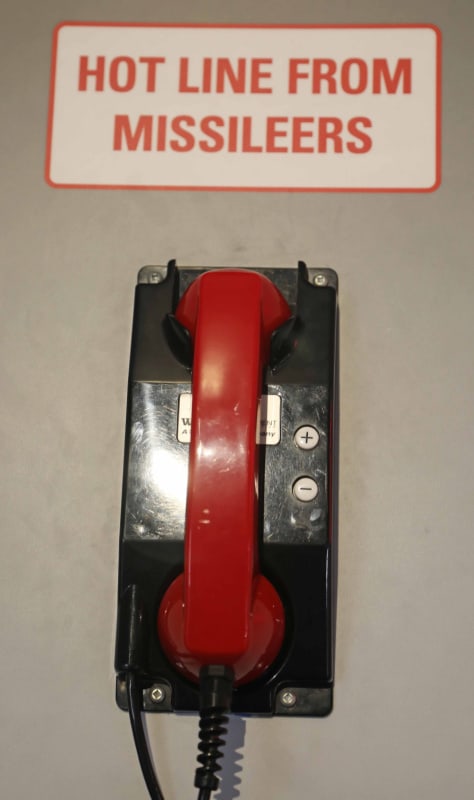 The best time to visit Minute Man Missile NHS is from late spring to fall when the weather is the best.

The hottest temperatures are from June 10th to September 15th with an average daily temperature above 79 degrees.

The coldest temperatures are from November 21 to March 3rd with an average temperature below 45 degrees.

The snowiest weather is from October 30th to May 1st. March gets the most snow with an average of 3 inches. 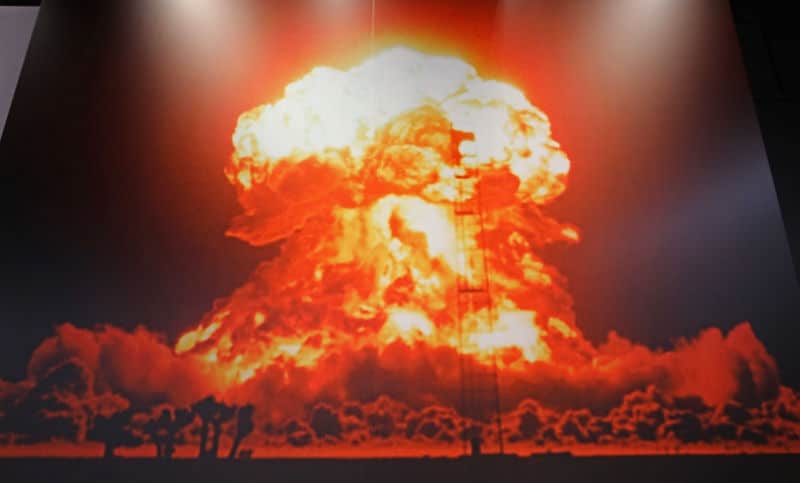 Best Things to do at Minuteman Missile NHS

We suggest planning a couple of hours to visit the park. That being said you could do it quickly if you only have a little bit of time.

The visitor center is absolutely amazing! As you approach the building you will see three pillars that represent the air, sea, and land elements of the nuclear triad.

The visitor center is filled with exhibits that truly show what it was like to work at the missile sites and why they were placed in South Dakota.

Make sure to get a picture of the famous Domino's pizza delivery door.

The Junior Ranger program is the perfect opportunity for visitors of all ages to learn more about the park.

The Delta-01 Launch Control Facility can be seen from I-90. What is visible is the topside support building.

31 feet below ground is the underground Launch Control Center.

Visitors not on a tour can walk up to the entrance gate and look through the fence into the compound. There is a cell phone tour that provides information on the site and how it operated.

In order to enter the facility visitors must be on a ranger-guided tour.

Each tour is limited to 6 people and they tend to fill quickly! Reservations can be made 90 days prior to the tour day.

Same-day tours are NOT available during the summer!!!

The Delta-01 Tours last 45 minutes starting at the entry gate to the compound.

There is a 1/4 mile round trip walk on the tour. All visitors must be able to walk and stand without assistance.

Visitors who wish to participate in the underground part of the tour must self-certify that they meet the following requirements:

The Delta-09 Missile Silo contained a fully operational Minuteman Missile from 1963 until the early 1990s.

This missile had a 1.2 megaton nuclear warhead. This was one of 150 missile silos spread across western South Dakota.

Today visitors can see a silo 12 feet in diameter and 80 feet deep that is made with reinforced concrete with a steel-plate liner.

There is a glass roof that allows visitors to look at the unarmed missile that is inside.

The Cell Phone tour is a great way to learn more about Delta-09 and Delta-01 along with the history of the Minuteman Missiles.

The cell phone tour is narrated by Air Force veterans who served at these sites. 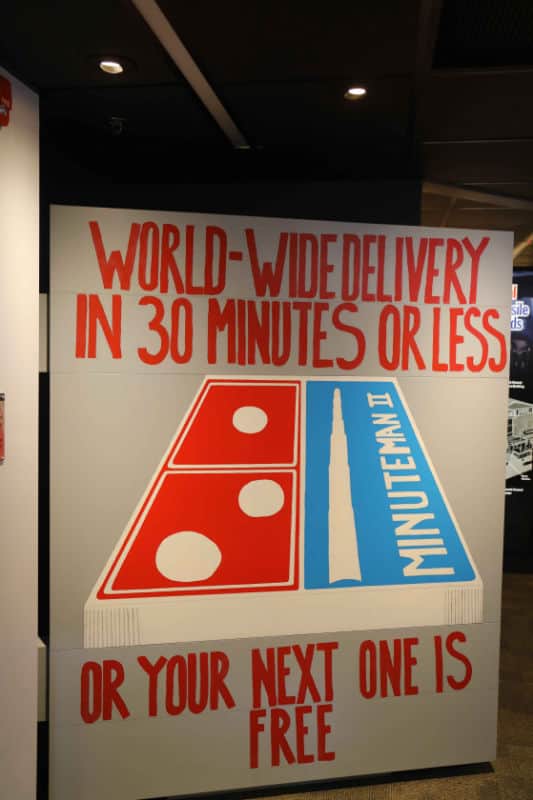 There are no hiking trails within the park. We do suggest having water and being prepared for the weather while visiting the missile sites.

How to beat the crowds at Minuteman Missile NHS?

The only crowds we have seen have been in the visitor center but they were easy to work around.

The exhibits make it easy to walk to another area. 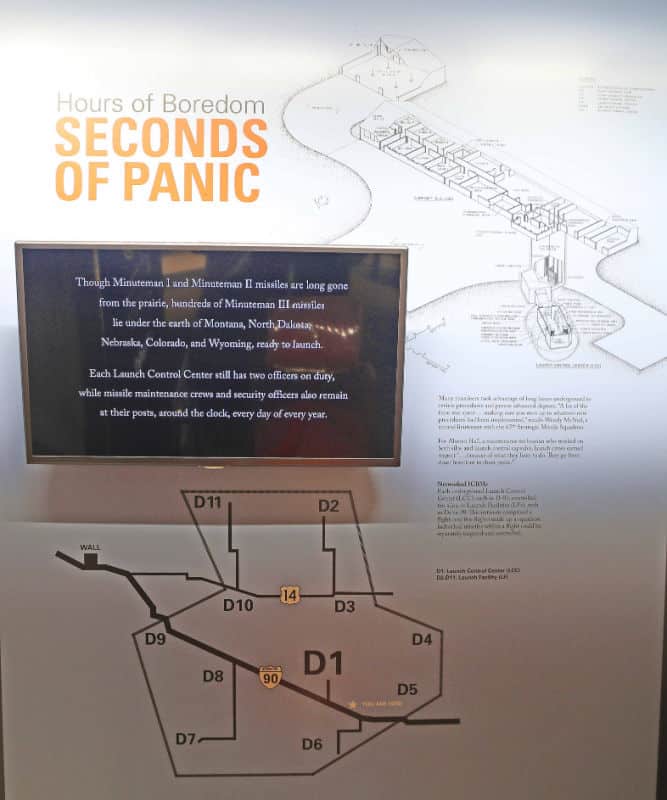 Where to stay when visiting Minuteman Missile National Historic Site

Nearby lodging can be found in Badlands National Park, Interior, Wall, and Kadoka, South Dakota.

Click on the map below to see additional vacation rentals and Hotels near the park.

The closest National Park Campgrounds include:

This campground has RV and Tent Sites with waterfront views.

This campground offers tent and RV sites along with lodging

This campground offers RV and Tent Sites along with lodging.

The Missile Next Door: The Minuteman in the American Heartland