Complete Guide to Hubbell Trading Post National Historic Site in Arizona, including things to do, history, hours, directions, and so much more. 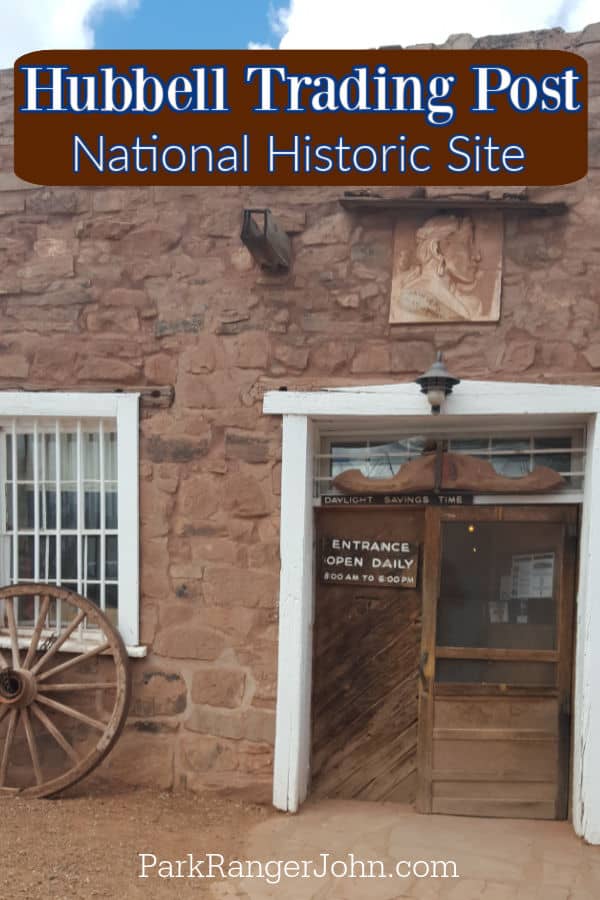 Step inside the oldest operating trading post in the Navajo Nation at the Hubbell Trading Post National Historic Site.

This trading post has been serving Ganado, selling groceries, grain, hardware, horse tack, coffee, and Native American Art since 1878.  When your eyes adjust to the dark lighting, you will be amazed at the number of goods available within the Hubbell Trading Post.

Hubbell Trading Post became a National Historic Site in 1965 with the understanding that it would remain in business as a working trading post.

The trading post was started in the 1870s and continues to operate today. The National Park Service manages the park within the Navajo Nation.

Make sure and give yourself enough time to explore the visitor center, trading post, and surrounding grounds.

The park offers visitors a look into the past, with its historic buildings and artifacts that were once used in trading by the Navajo Indians.

You can also learn more about Native American culture and observe some of the best preserved artwork and architecture from that era. 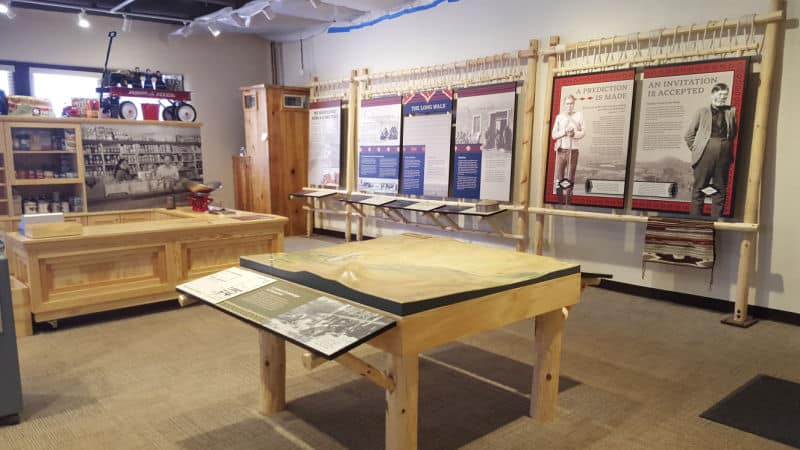 The Hubbell Trade Post became an important lifeline for the returning Navajo. Here, the Navajo traded their traditional wares for European goods. The Hubbell family established a network of trading posts throughout Arizona.

In 1864, the Navajo Nation was forced off their land in Arizona and had to walk to the reservation in New Mexico, where they were to be settled. The forced relocation came after a particularly violent period between the Navajo Nation and the U.S Army. The Navajo suffered greatly before, during, and after the Long Walk.

Once in New Mexico, the Navajo lived on the Bosque Redondo Reservation in Fort Sumner. During their stay, the Navajo traded with settlers for survival. It was here that the Navajo were introduced to items that later became staples to them, such as flour, sugar, coffee, and baking powder.

After four years of internment at Fort Sumner, the Navajo were permitted to move back onto a portion of their land in Arizona. When the Navajo returned to the area, they found their way of life destroyed.

As a result of violent clashes with the United States Army during and after the conflict, Navajo livestock, irrigated farmlands, and homes, were destroyed. The Navajo needed to rebuild their lives and supplement food and items they could grow and make themselves with other traditionally European goods. One way to do this was through trade.

John Lorenzo Hubbell was born in 1853 in his family home, the Gutiérrez Hubbell House in New Mexico. Hubbell worked at trading posts in New Mexico and Arizona. He moved to Ganado, Arizona, in 1876 and bought a group of buildings that he turned into the Hubbell Trading Post in 1878. Hubbell became the most prominent Navajo trader.

The barn was built in the traditional Anasazi style, out of sandstone, mud, and cornstalks. The additional buildings were constructed in the Navajo Hogan style. Navajo traveled from far and wide to visit the Hubbell Trading Post, so Hubbell built accommodation at the post to house the travelers. The additional buildings were built in the Navajo Hogan style.

Hogans are traditionally made from logs, and the door traditionally faces east. The guesthouse was initially called Pueblo Colorado but was renamed Grando after a prominent Navajo chief called Ganado Mucho.

Ganado Mucho became a close friend to the Hubbell family, and his son, Many Horses, is buried in the Hubbell family graveyard. The Navajo brought wool, rugs, jewelry, sheep, baskets, and pottery to trade at the Hubbell Trading Post. In return for these items, the Navajo received items that could supplement their homegrown produce such as flour, sugar, and other staples.

Hubbell not only built a thriving trading post on the land, but he homesteaded 160 acres around the post. As the Navajo Reservation expanded, the Hubbell homestead became part of it. Hubbell gained the approval of congress to keep his land which the reservation would encircle.

Hubbell and his sons bought and built twenty-four trading posts. They created an empire that utilized the railroad and stagecoaches. The Hubbell family became the most influential Navajo traders of the 19th Century.

Hubbell significantly influenced the traditional skills of Navajo rug weaving and silversmithing due to his demands around the quality of items traded at the Hubbell Trading Post.

Roman’s wife continued the tradition and managed the post until 1967, when the grounds were transferred to the National Parks Service. The trading post is still active and includes the original structures and furniture from the Hubbell home. 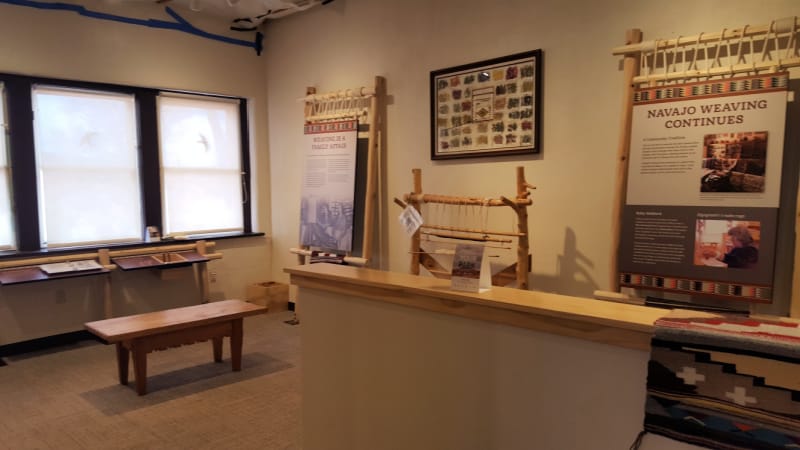 Things to know before your visit to Hubbell Trading Post NHS

Pets must be restrained or kept on a leash no longer than 6 feet at all times. Dogs must wear a collar with current tags at all times, Pick up after your dog at all times and leave no trace.

On the other hand, pets are not allowed inside buildings unless they are service animals. Never leave pets unattended or alone inside a vehicle. Excessive barking is also prohibited.

GPS and cell phone services may not always be dependable in the Navajo Nation.

Winter Hours: Depend on weather and staffing (mid October - mid May).

The park is closed Thanksgiving, Christmas and New Year’s Day.

There is no public Wi-Fi available

There are at least 2 EV Charging stations in Gallup, Mexico, 50 miles from the park. 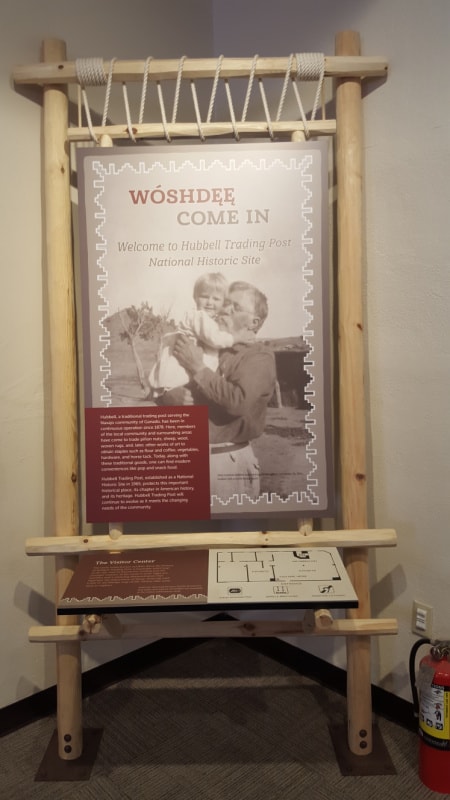 Hubbell’s family sold the property to the National Park Service in 1965.

Declared a National Historic Landmark in 1960

Public Law 89-148 authorized the purchase of the "site and remaining structures of the Hubbell Trading Post at Ganado, Arizona, including the contents of cultural and historic value, together with such additional land and interests in land … needed to preserve and protect the post and its environs for the benefit and enjoyment of the public." 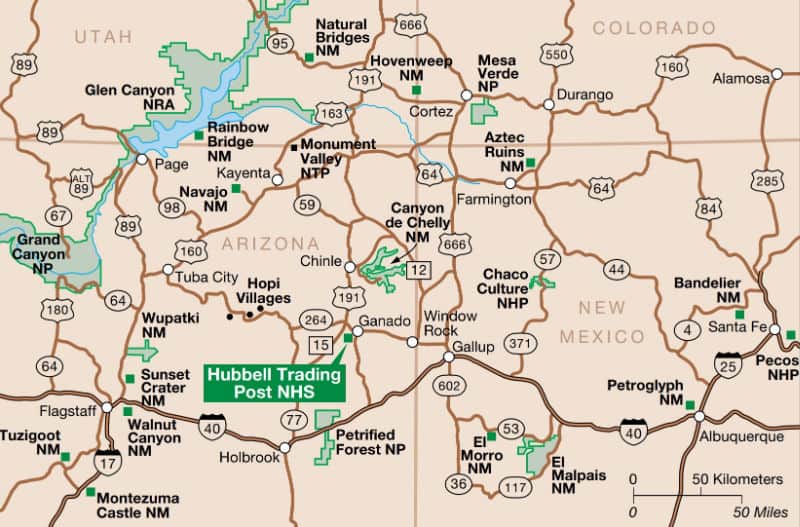 The Visitor Center is on the right side of the Hubbell Trading Post NHS.

Hubbell Trading Post National Historic Site is located at milepost 446.3 on AZ state route 264. Visitors traveling on I-40 can take U.S. Highway 191 North to Ganado and drive west on Hwy. 264.

From Gallup, New Mexico, you may take U.S. Highway 491 North to U.S. Highway 264 west toward Ganado, through Window Rock, Arizona. When you are driving south from Chinle, Arizona on Hwy. 191 you will drive east when you reach Hwy. 264.

The best time to visit Hubbell Trading Post National Historic Site is early summer to early fall. From mid-June to early September, visitors can experience the beauty and culture of this historic spot while taking advantage of warm, sunny days. During this period, days are usually rain-free and the air is dry and comfortable - perfect for outdoor activities!

In Ganado, the summers are warm, dry, and mostly clear and the winters are very cold, snowy, and partly cloudy.

The hot season is from May 30 to September 14, with an average daily high temperature above 78 degrees.

The cold season is from November 22 to February 25, with an average daily high temperature below 51 degrees.

The snowiest season is from December 24 to February 13, with at least 1 inch of snow in a month. January gets the most snow with an average of 1.1 inches. 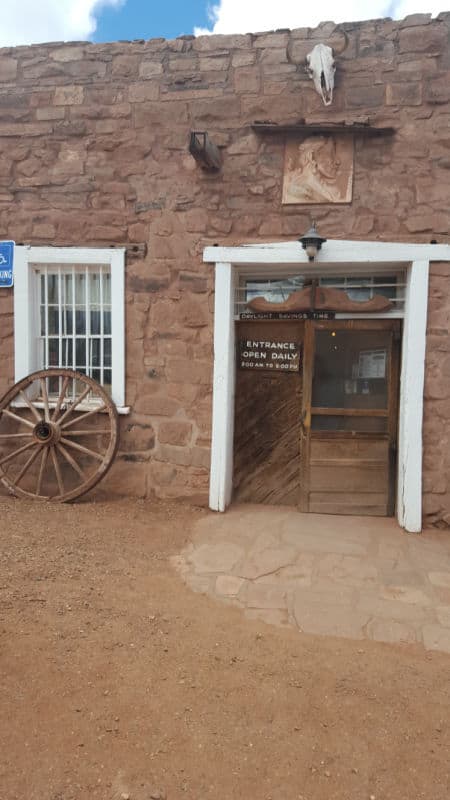 Best Things to do in Hubbell Trading Post NHS

The Junior Ranger Program is a great way for kids and adults to learn more about the National Parks you are visiting. We try to complete the Junior Ranger program at every park that we visit.

The Junior Ranger program for Hubbell Trading Post takes you around the grounds and gives you the chance to learn about life at the trading post.

Tour the Hubbell family home to see their amazing collection of Southwestern Art and Native American Arts and Crafts. The house is furnished as it would have been by the Hubbell Family.

Check out the Native American Auction in May and October.

We visited during the Native American Auction and it was an amazing surprise. We had no idea it was happening the weekend we planned to visit the park.

Walk the Veterans Trail along the Pueblo Colorado Wash and take in the natural beauty of the landscape.

We visited during the annual auction and the park was crowded but this event only happens twice a year.

We were still able to explore the park easily and check out the exhibits. 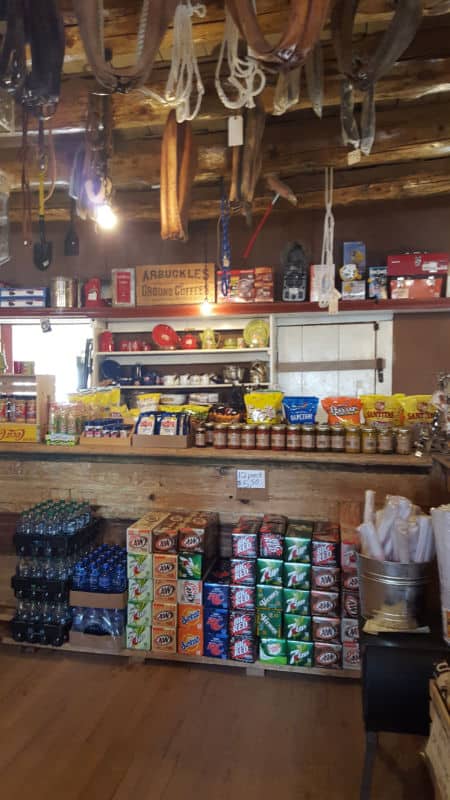 Where to stay when visiting/Lodging

Thunderbird Lodge in Chinle - Thunderbird Lodge provides amenities like a business center and a restaurant. Guests can connect to free in-room Wi-Fi. All 69 rooms include comforts such as air conditioning.

Holiday Inn Canyon De Chelly - Shopping on site, a garden, and dry cleaning/laundry services are just a few of the amenities provided at Holiday Inn Canyon De Chelly, an IHG Hotel. The onsite restaurant, Garcias Restaurant, features regional cuisine. Stay connected with free in-room Wi-Fi, and guests can find other amenities such as a gym and a 24-hour business center.

Click on the map below to see available lodging near the park.

The nearest campgrounds are about 40 minutes away at Canyon de Chelly National Monument near Chinle, AZ.